We Pick 12 Worthwhile WeChat Stores, From Fruit to Meat to Bread to Booze

Skip the mall and go shopping on the phone.
By Anthony Gates Oct 9, 2020 2020-10-09 Shopping
WeChat — it has everything. The app has become one of the largest platforms for small stores and restaurants to run their businesses from. And why not? It's a great incubator for startups and small businesses who don't want to go through the hassle of a physical location and all that entails. We picked nine worthwhile shops on the WeChat for a little food shopping on the phone. 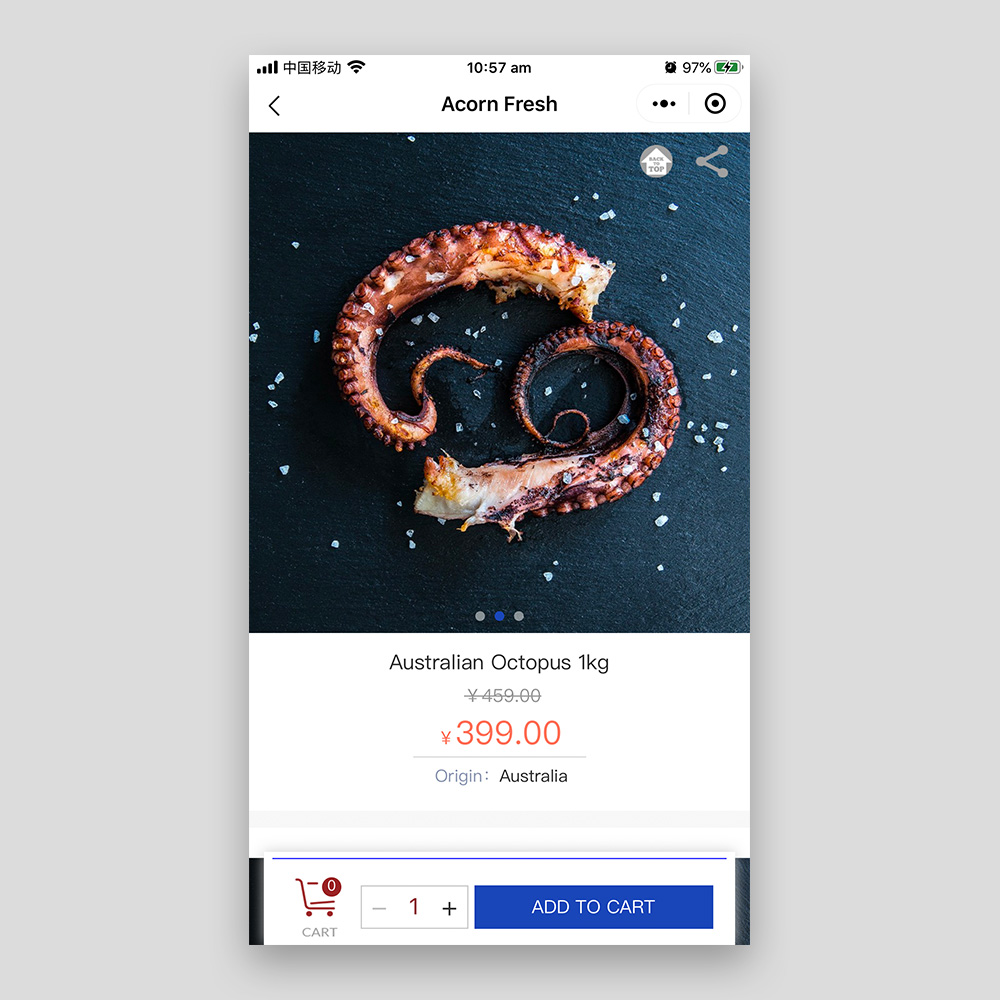 Acorn Fresh is primarily a seafood supplier, from oysters to octopus to Icelandic ocean fish. (They also sell plant-based pork Z-Rou.) There is an official WeChat account to follow but all shopping is done on the WeChat Mini Program. A few examples of what was on sale when we checked: 400g of Icelandic salmon for 124rmb; 400g of Icelandic Greenland halibut for 139rmb; 450g of yellowfin tuna loin for 149rmb; and 800g of Ecuadorian shelled shrimp (head-on) for 169rmb. 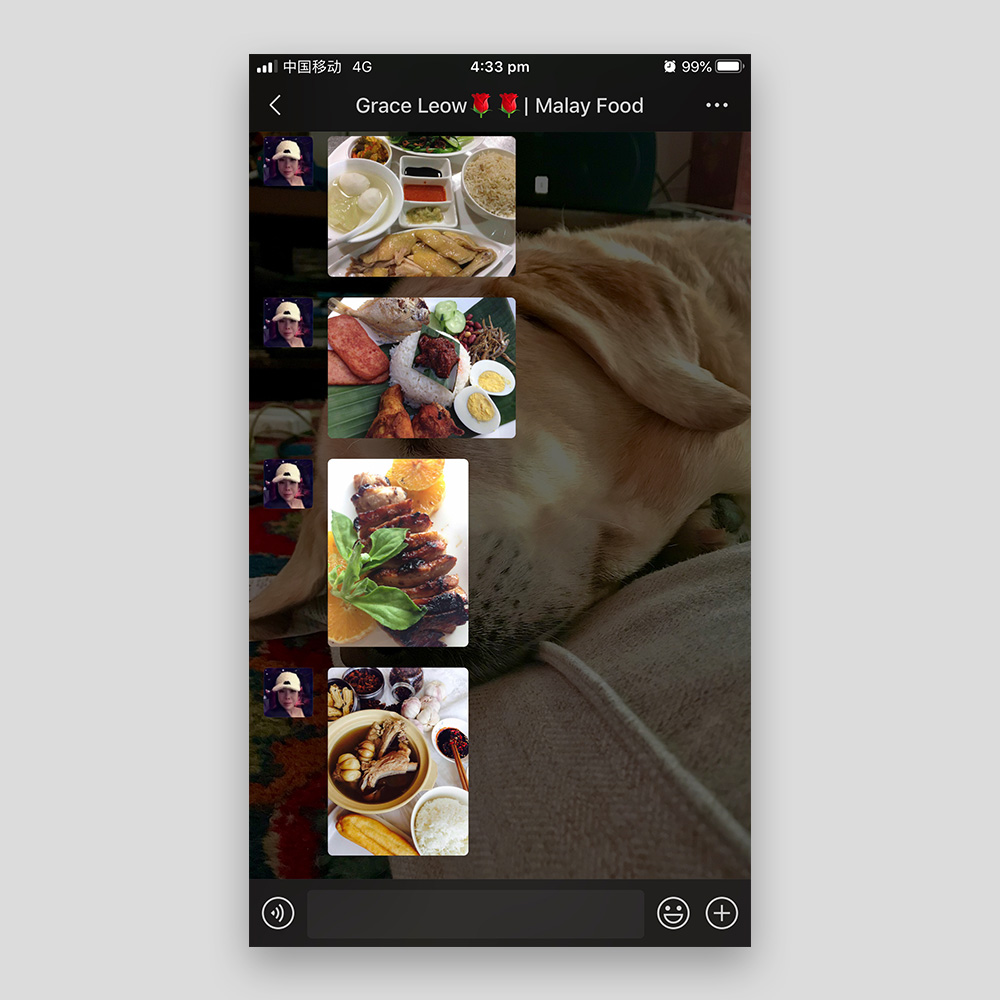 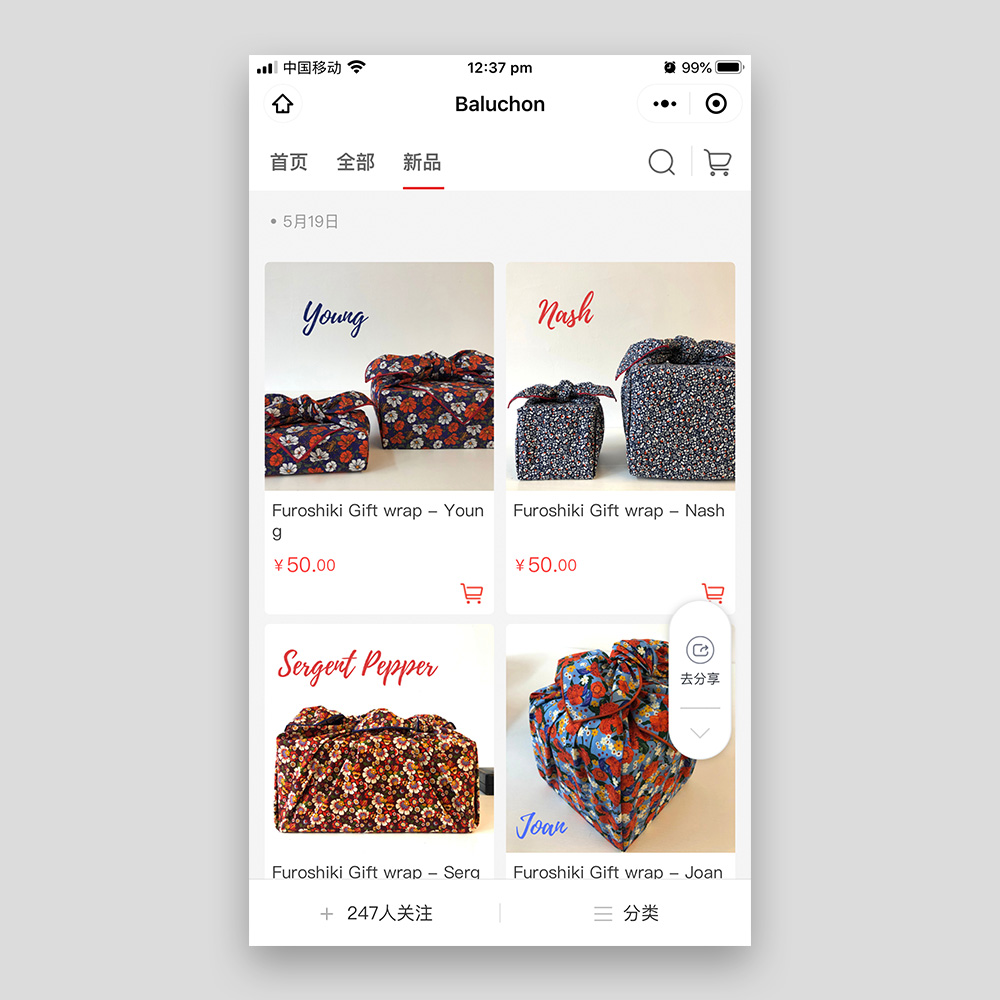 Baluchon was opened by French environmental engineer Nanou in 2017, who took it upon herself to offer an alternative to traditional, wasteful food packaging. To wit, re-usable food wraps coated in beeswax (88rmb) that are designed to be an alternative to plastic wrap, and a gift wrap done in the Japanese furoshiki method (50rmb), which is a cloth wrapping. They also sell a reusable face wipe made from bamboo cloth (“Panda Pads”, 140rmb) All products are made here in Shanghai and can also be picked up in their studio. 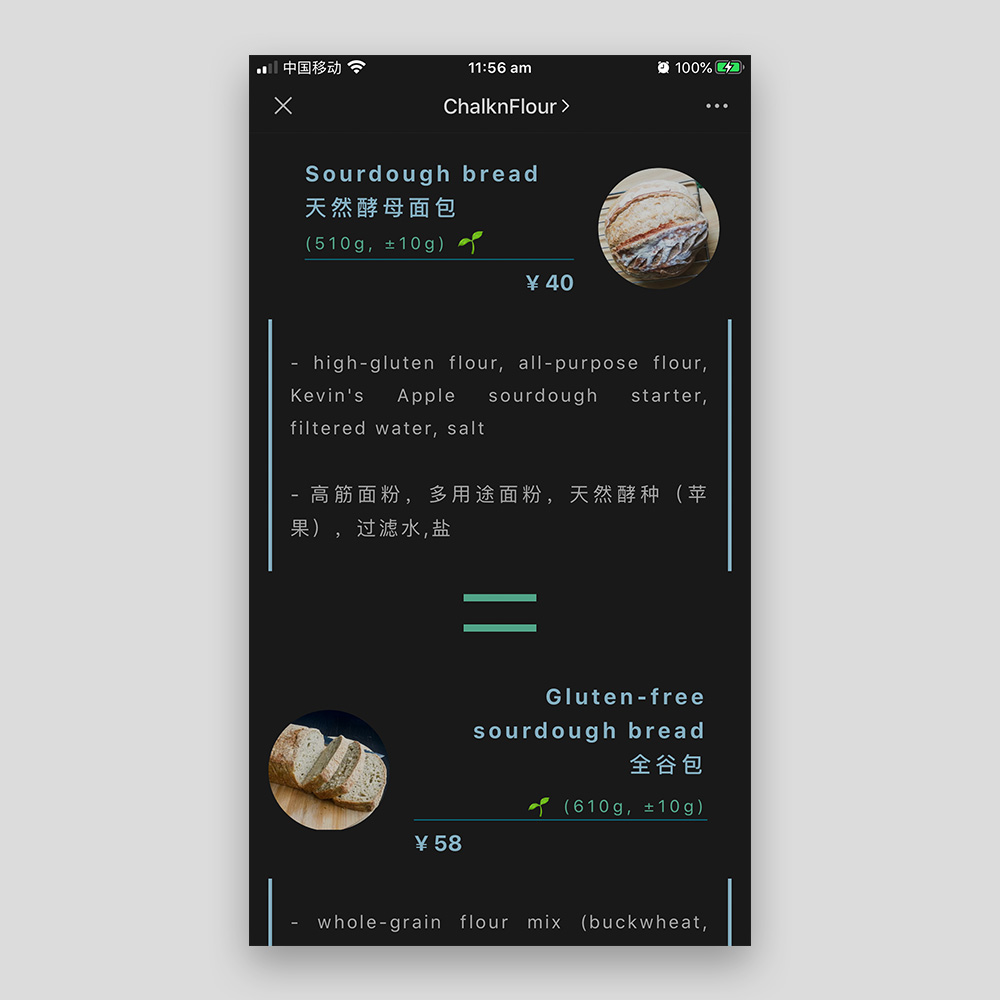 Chalk & Flour is a one-man bakery run by Kevin. The guy is big into two things: rock climbing and baking bread. The bread part started when he wanted to cook for his girlfriend, and give her something homemade to snack on. Now he bakes to order. Deliveries are not instant; he really only begins when he gets an order, which means that if you order a loaf of sourdough (40rmb), which is one of his main calling cards, he starts the process when you order, and you’ll get delivery 24 hours later. Kevin also bakes gluten-free sourdough bread, made of buckwheat, sorghum, brown rice and rice flours, for those with allergies or aversions. 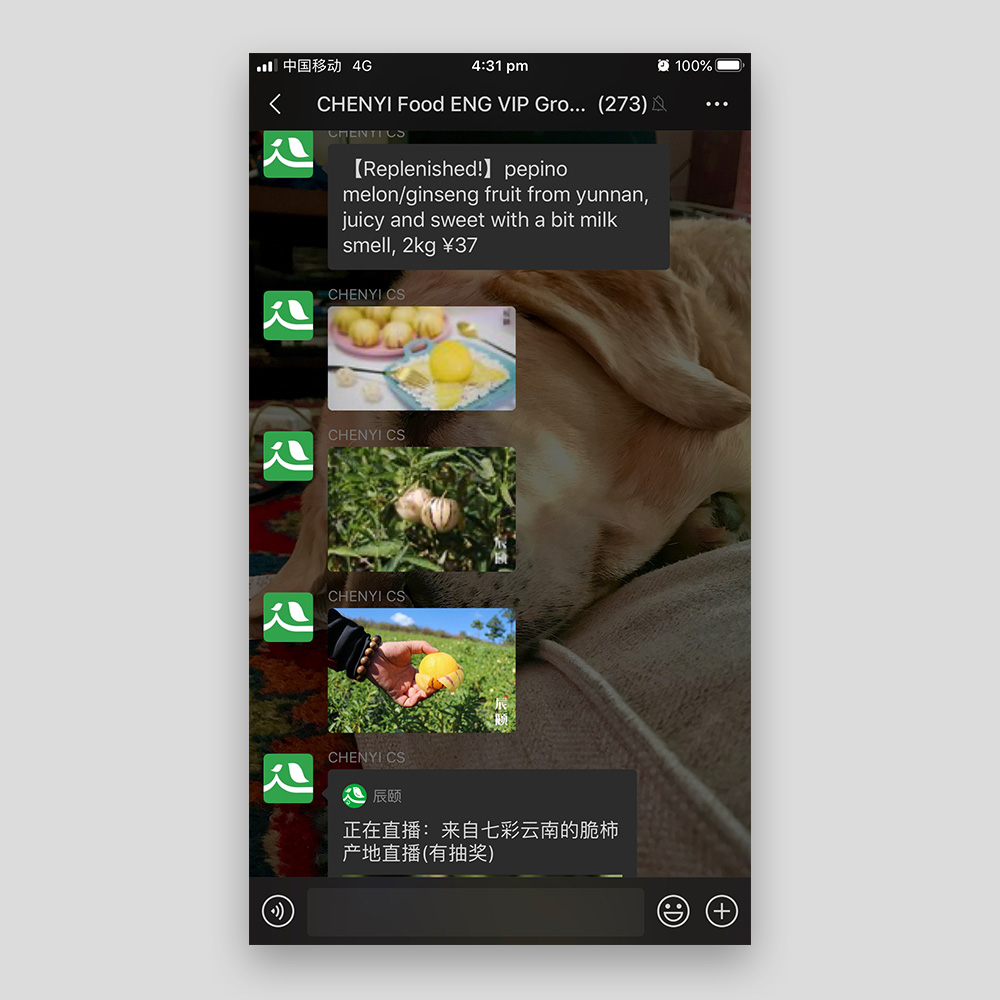 Chenyi is a fruit specialist that sells seasonal, regional Chinese fruit from Yunnan persimmons to Dangshan pears. Chenyi operates entirely on WeChat group chats. Just join one of the chats and stay updated on what’s selling. 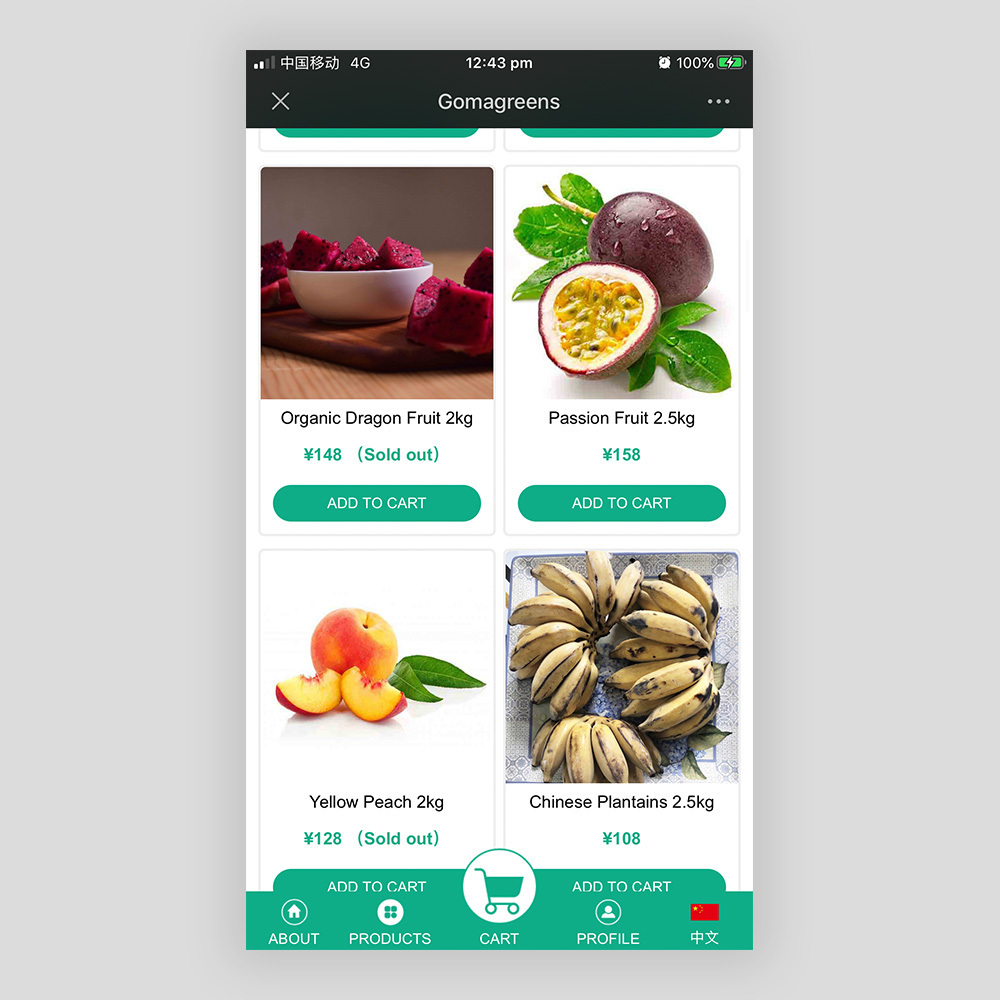 Goma Greens was established by Christina Freddie in 2016, who lives in Denmark. The online store delviers seasonal veggies, fruits and nuts from local farms which are meant to follow organic farming principles, as well as healthy snack packs and wild honey. They say they do regular sample analysis by a third party to ensure food safety. You can either buy a la carte or subscribe to a weekly, customizable box delivered every Monday. Regular delivery takes between 3-5 working days. 4kg veggie box (180rmb), 2.5kg pineapple (58rmb), 2.5kg Chinese Plantains (108rmb). 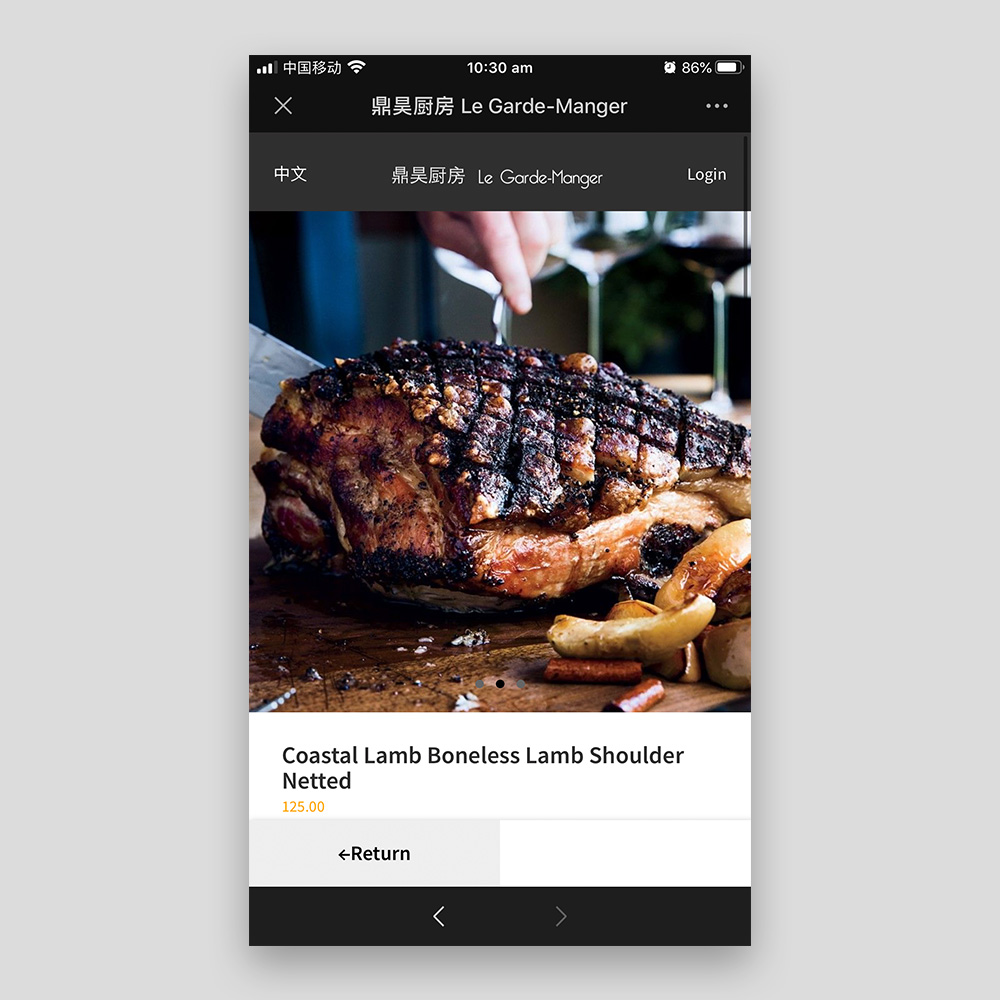 Le Garde-Manger is the retail arm of restaurant distributor Classic Fine Foods, who are in turn owned by Metro. Selection is excellent, especially for meats, with lots of cuts that are usually only available to chefs, like Black Angus tri-tip (196rmb for 1.3kg) and Wagyu flank steaks (388rmb for 1.4kg). There is no Mini Program, but instead follow the link on their WeChat account. 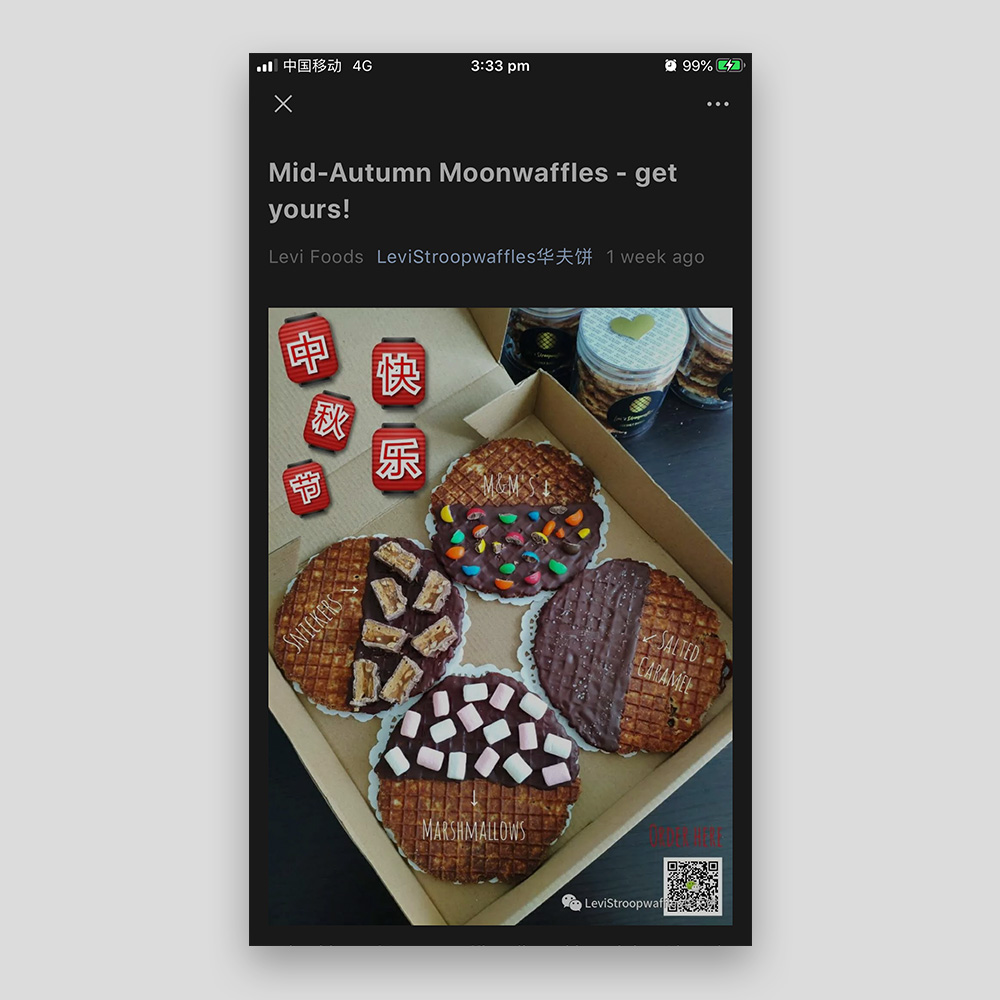 Named after their young son, Levi, this shop is run by a Dutch couple making their own caramel waffles (128rmb for two jars). They first baked them for Levi’s first birthday and have been going ever since. Levi's Stroopwaffles has a WeChat account, and although delivery fees range from 12-20rmb, pick-up from the shop is free. Pull the caramel! 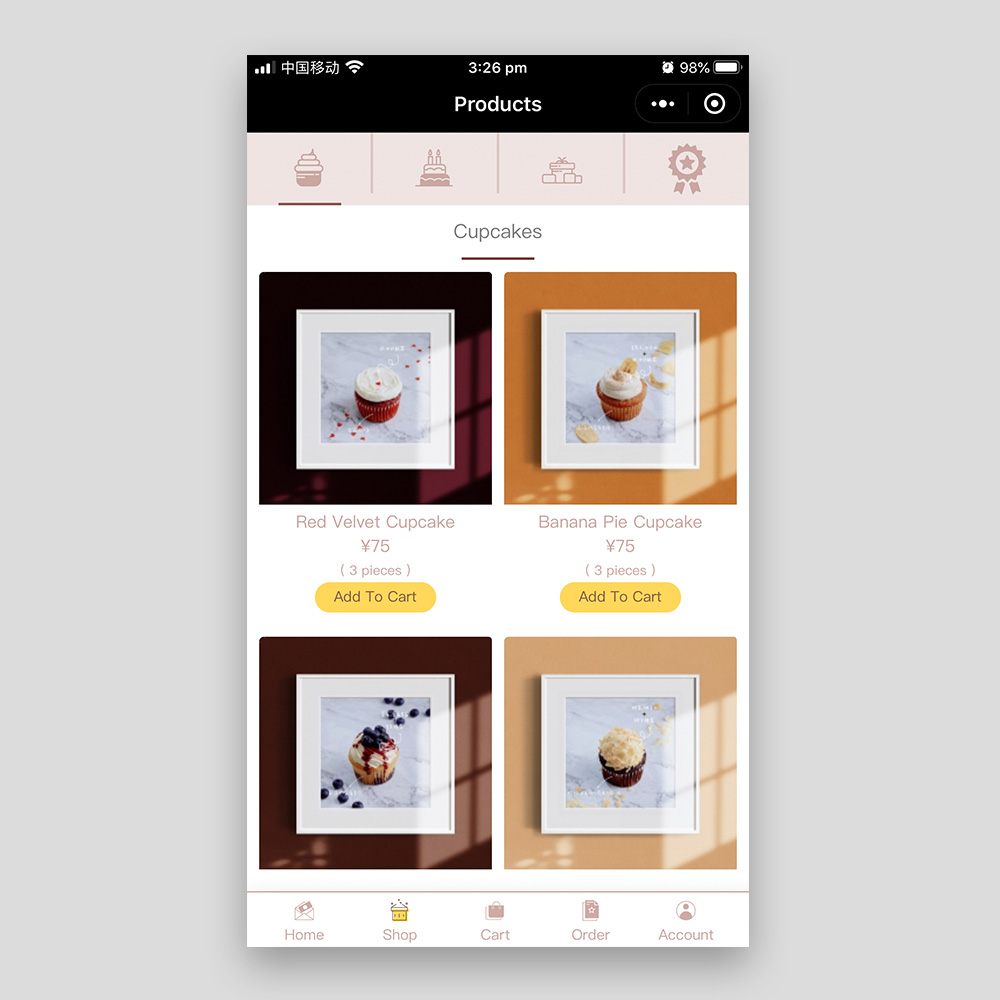 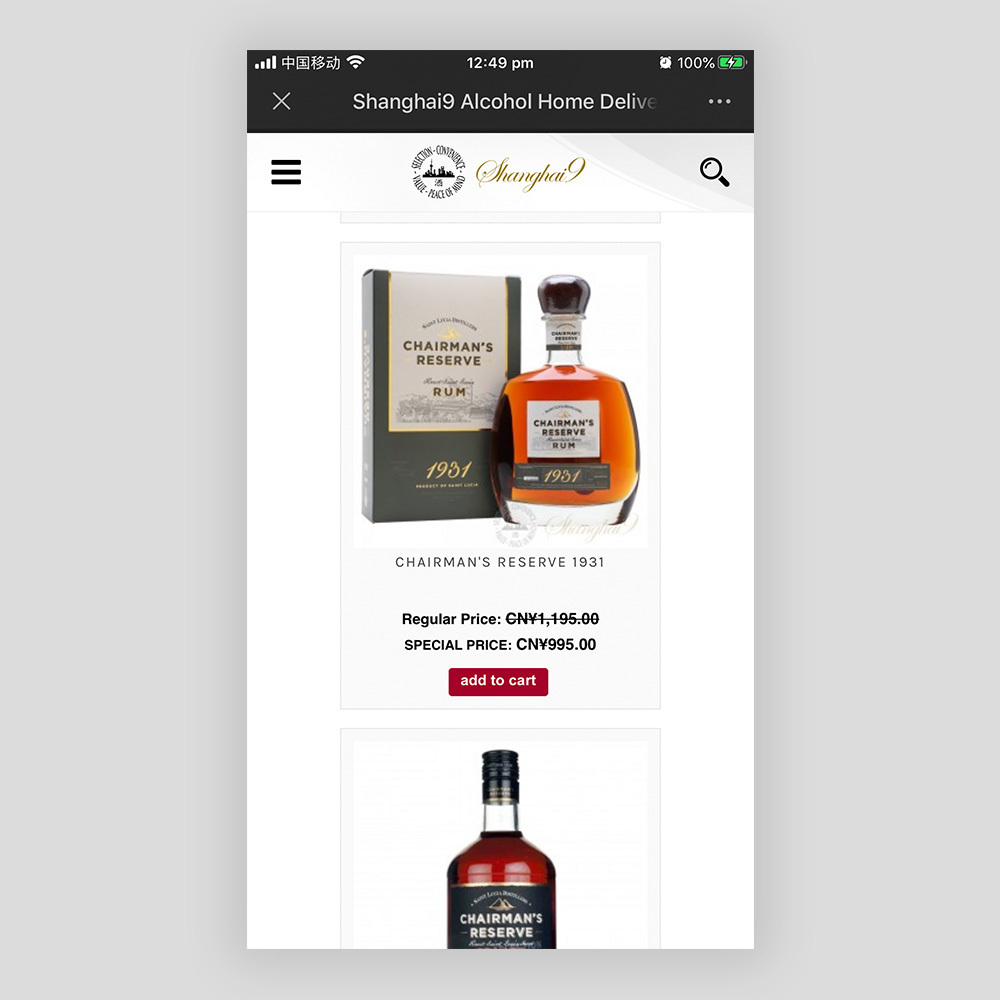 Shanghai9 is a delivery service for imported wines, spirits, beer and other beverages. Same day delivery for customers in downtown Shanghai providing the order is placed before 5pm, Monday to Saturday. Delivery to the rest of China at reasonable rates. They seem pretty confident: everything is guaranteed authentic or they'll give you three times your money back. Decent deals on higher-end stock; 24-case of 4 Pines Brewing (299rmb), Diplomatico Reserva Exclusiva (295rmb), Ardbeg 10 (395rmb). 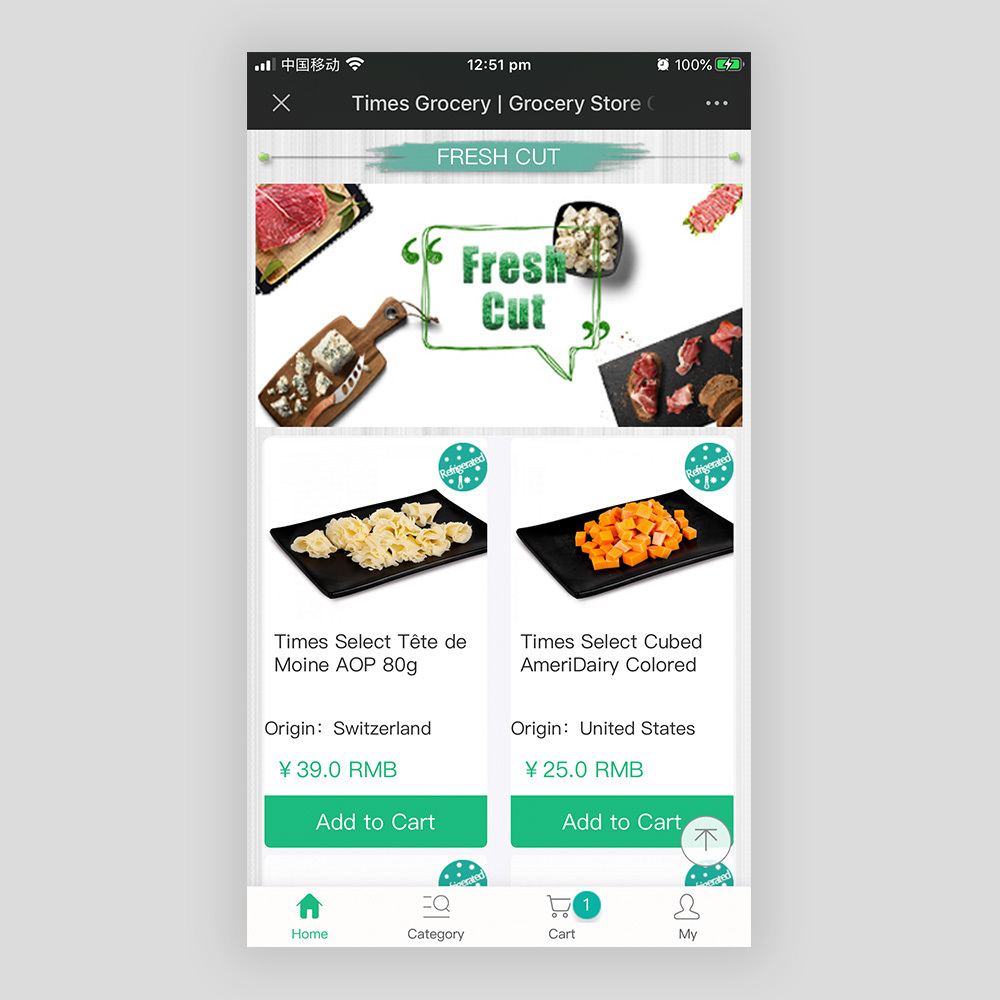 Times Grocery is a 15 year old imported grocery chain under parent company Shanghai Hengyi Trading Ltd., which is General Mills' exclusive importer and distributor for the China Mainland. The online store was launched in early 2019. They stock expat-friendly groceries but also office supplies, cosmetics, baking tools... one-stop shop. They have one-hour delivery times within 3km of their physical stores on Yunle Lu and Huangyang Lu, otherwise it can take between 2-5 hours and orders after 3pm arrive the next day. Free delivery for orders over 199rmb. 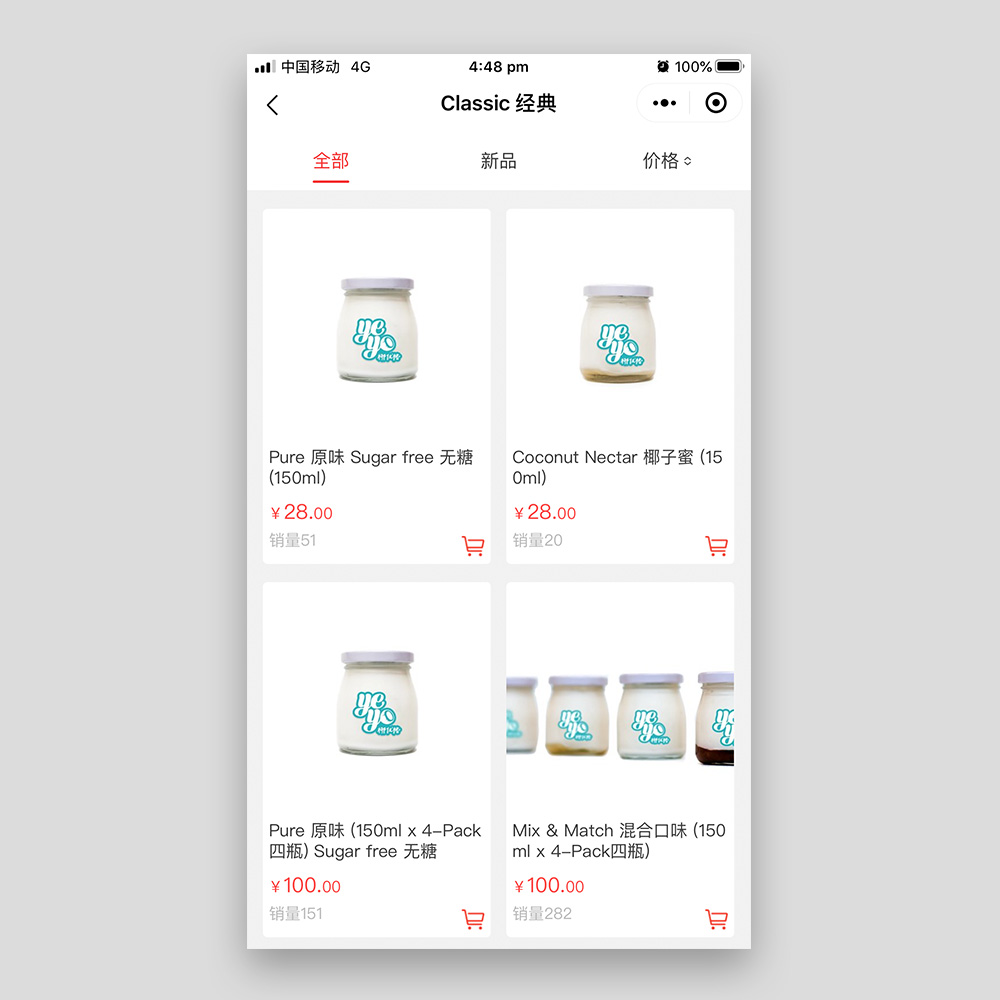 Christina Zhu started making dairy-free coconut yogurt six years ago in Beijing, when she was unable to eat regular yogurt without breaking out into a rash. Now her company, Yeyo, sells in Shanghai as well, and is available by WeChat Mini Program. They have a recycling program, collecting old bottles, and a subscription program for various size bottles of yogurt. Orders for Shanghai are sent on Sundays and arrive on Tuesday. 150ml bottles of yogurt sell for 28rmb; the 500ml big jar is 80rmb.