We Went Camping at This Great Farm on Chongming Island

A little slice of sustainable farm life from a young couple in rural Shanghai.
By Songbei Zhang
2020-08-21 11:00:00
Photos: Angela Leung
Outbound: Outbound is SmartShanghai's travel features series dedicated to fascinating and wonderful places, nearby and far-flung, around China and sometimes not.

The city can be too much. When it gets overwhelming, I start dreaming about a rural life: a house made of bricks and wood, a dining table set up under the shade of a tree, a small vegetable garden, no skyscrapers in sight.

And now I’ve found it. It’s on Chongming island.

Heartland is a kind of community refuge on the edge of Chongming, spread over 12,000 square meters of rice fields, vegetable gardens, and yes, dining tables under trees. In Chinese, it’s named Chun Ting (椿庭) for the two big chun (椿) trees on the farm.

Walking through the front gate, the first thing that caught my attention were the huge lotus flowers, each one as big as a dinner plate. An unreal shade of pink, they were brought to Chongming by Xiong Feng, the 45-year old owner of Heartland, from his hometown in Hubei. 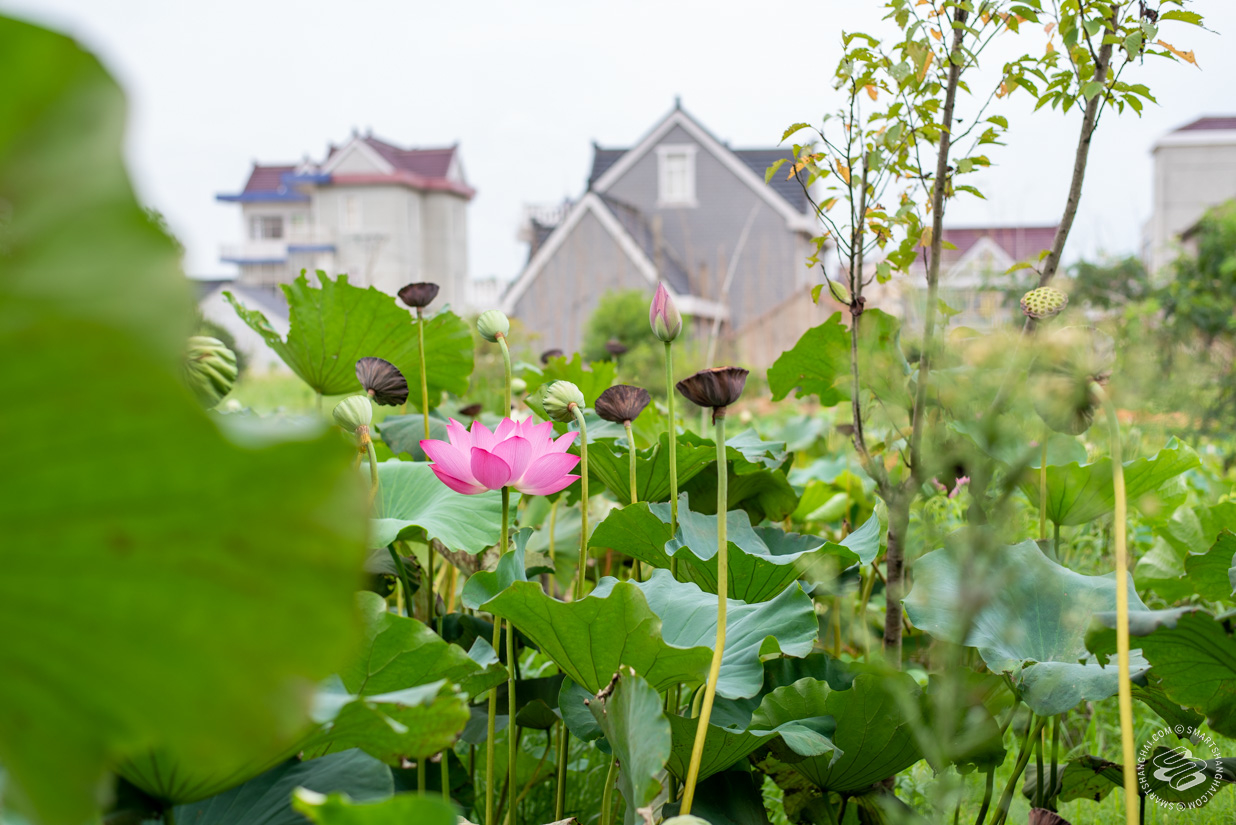 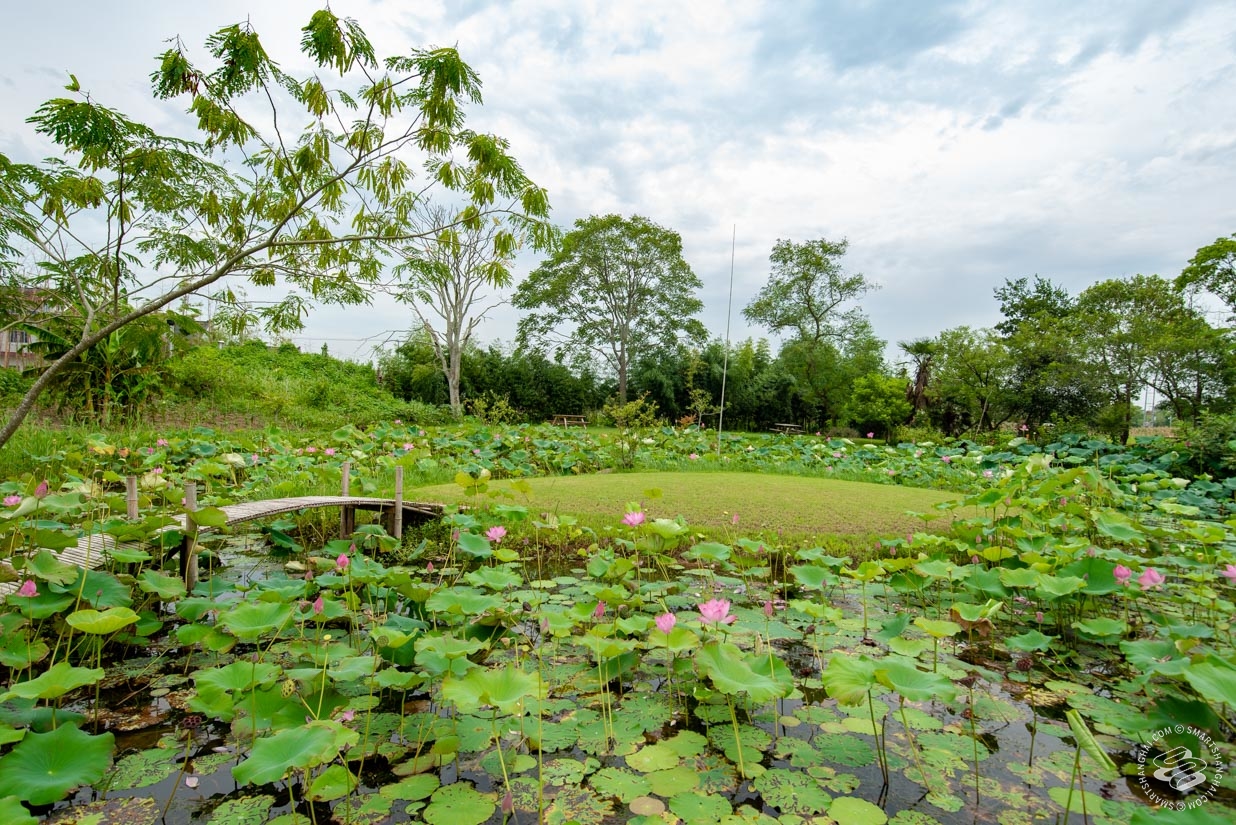 A former architect and landscape designer, Xiong lives at Heartland with his wife Moqi and their two daughters. His path here was a bit circuitous. After giving up a career in interior design, along with his company and an apartment along the Bund, Xiong and Moqi decided they wanted something more rural for their coming child — they had both grown up in the countryside and wanted to return. So they sold their stuff and moved back to Xiong’s hometown in Hubei, building a communal property for sustainable living that would serve as the model for Heartland.

In 2017, when their oldest daughter was ready to start school, they moved from Hubei to Chongming, where Moqi grew up, and began building Heartland. It opened to the public in 2018.

Now it’s a functional home for their family where they also allow people to visit and stay. 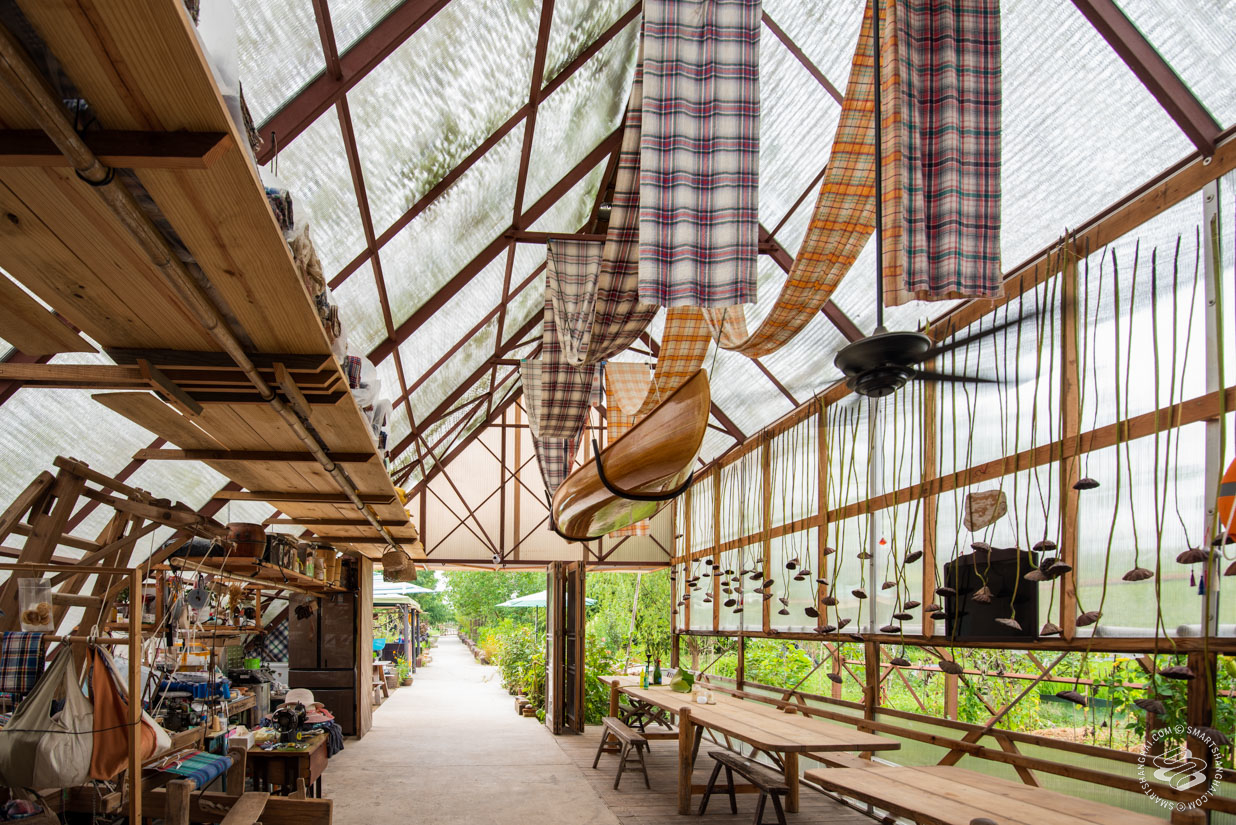 There is a main lodge, mostly built from red cedar, with high ceilings and large halls, that doubles as living room and boat-building workshop. As if Xiong didn’t do enough, designing the entire farm based on what he calls a “functional scenery” philosophy, he has also taught himself to build canoes. At the moment, he’s building a sailboat he plans to take out on the canals of Chongming. 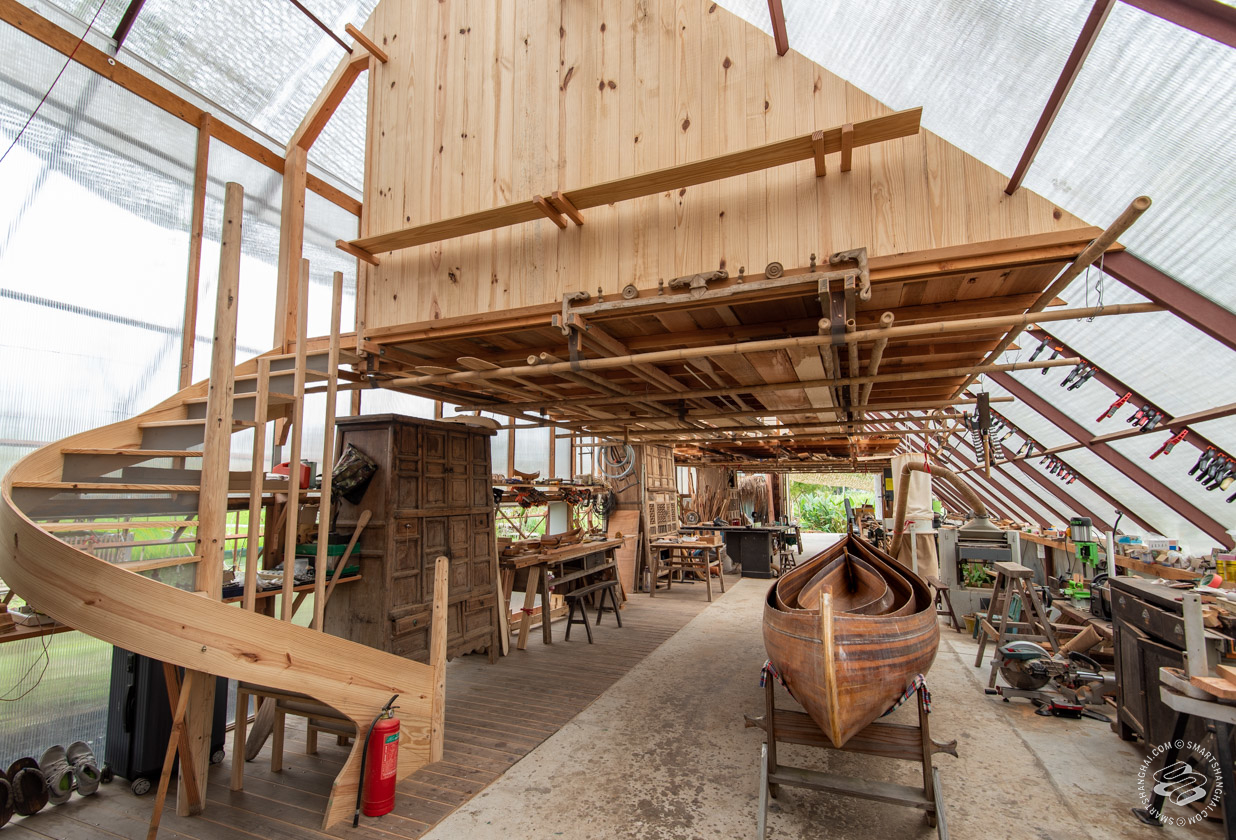 The second floor of the lodge is for guests to spend the night, among the extra timber and the bags of old seeds Moqi has been saving, collected from farmers who never cross-bred their crops. 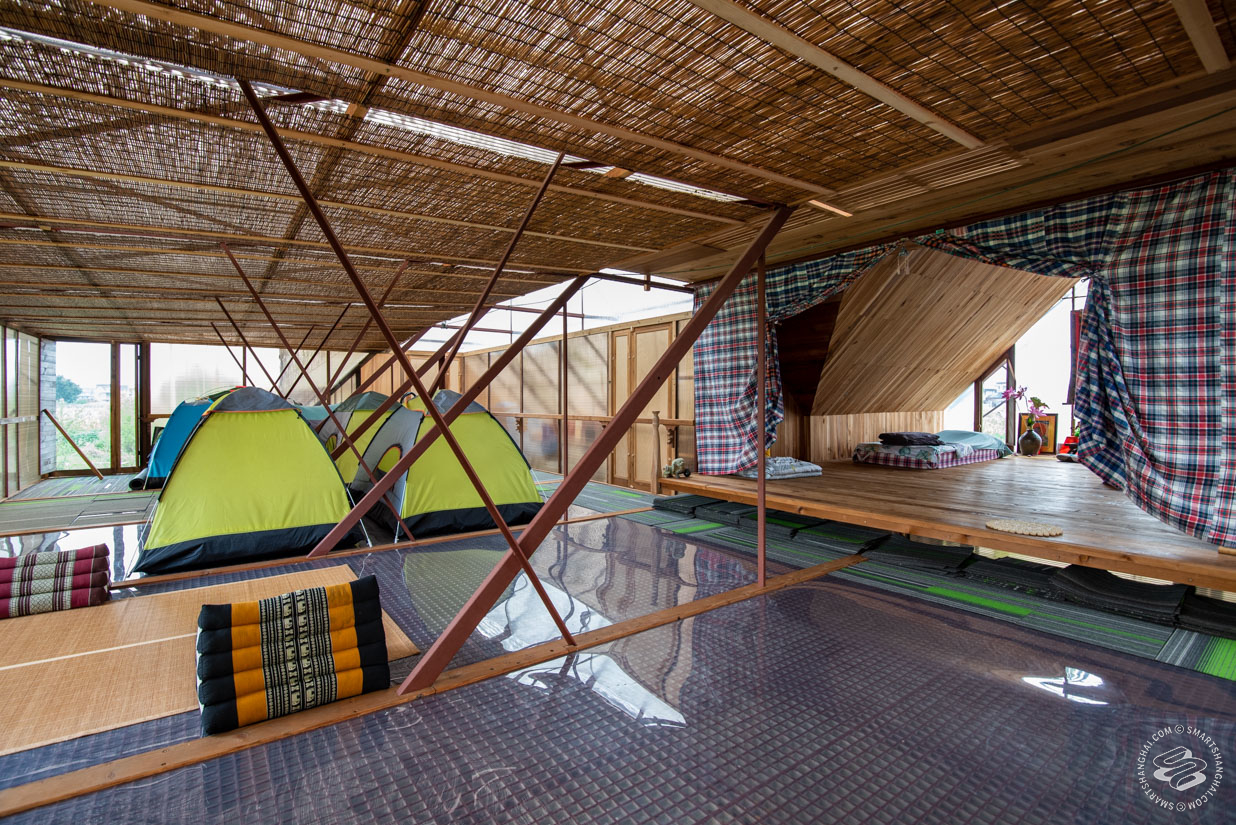 A former art student, Moqi became interested in permaculture several years ago and obtained a certificate to practice its philosophy. Developed in the late 1970s by two Australians, permaculture is a set of design principles focused on human’s co-dependence on natural ecosystems. The guiding principle is the “harmonious integration of the landscape with people, providing their food, energy, shelter and other material and non-material needs in a sustainable way.” It also provides technical guidance for agriculture. 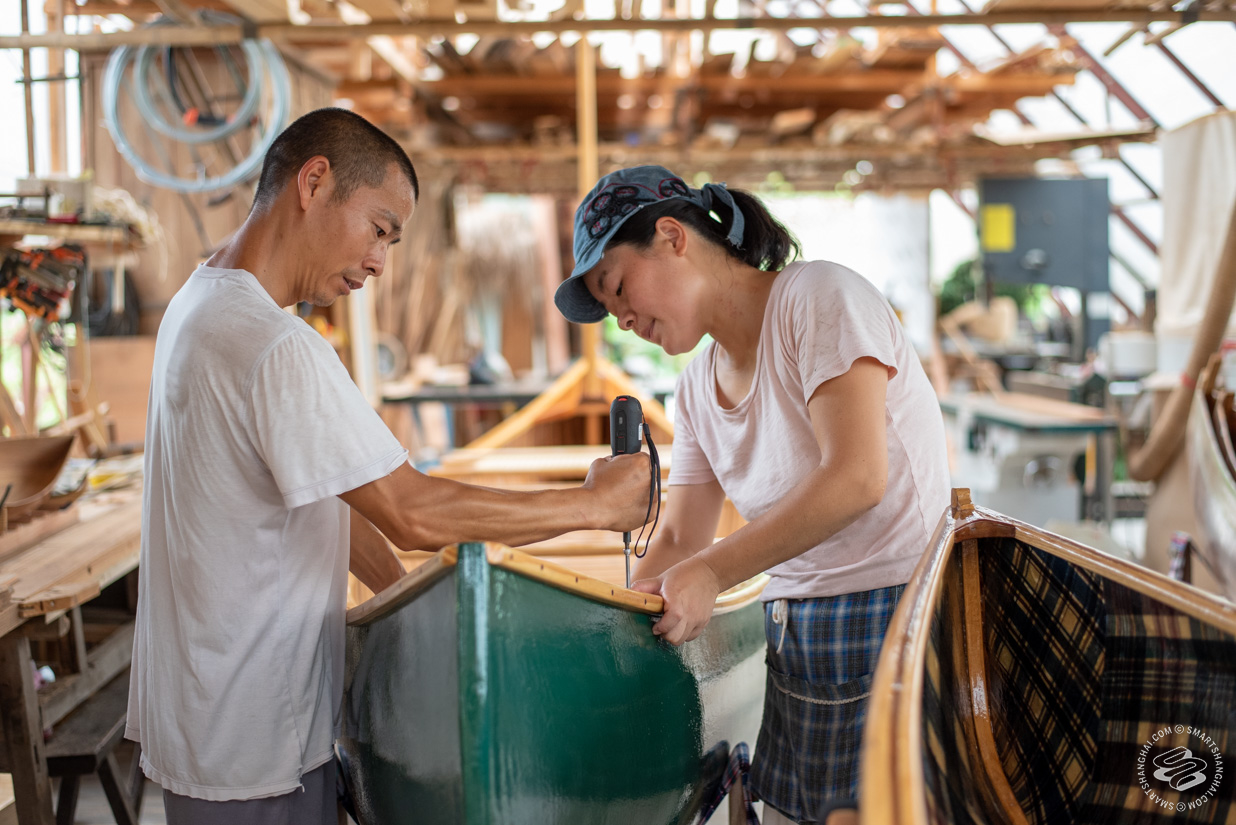 Moqi does the farming, producing food without disturbing the existing ecology. On the edges of the lotus pond, she has grown rows of okra, which we would have for dinner. Taro grows on the sides of the narrow dirt roads that lead to the corn field and the tomatoes. Ducks live in the shallow water of the rice field and cowpeas hang down from the roof of a shed.

The vibe is relaxing and earnest. Xiong and Moqi put their hearts into this place. It is, after all, their home.

But What Do You Do There?

There are many little things to do, but the primary activity do nothing at all. Heartland is perfect for just zoning out.

After a home-cooked lunch, I laid in the hammock underneath the big camphor trees and let my mind wander. I wasn’t bored for a second. But if you insist…

There’s boating. Ask Xiong to borrow one of his hand-built canoes and potter around the canals beyond the farm. On my little jaunt, I picked several lotus pods and flower petals, as instructed, to cook for dinner that night. Xiong is also happy to show off and explain his boat-building workshop; he’ll even sell you one or built a custom boat for you. 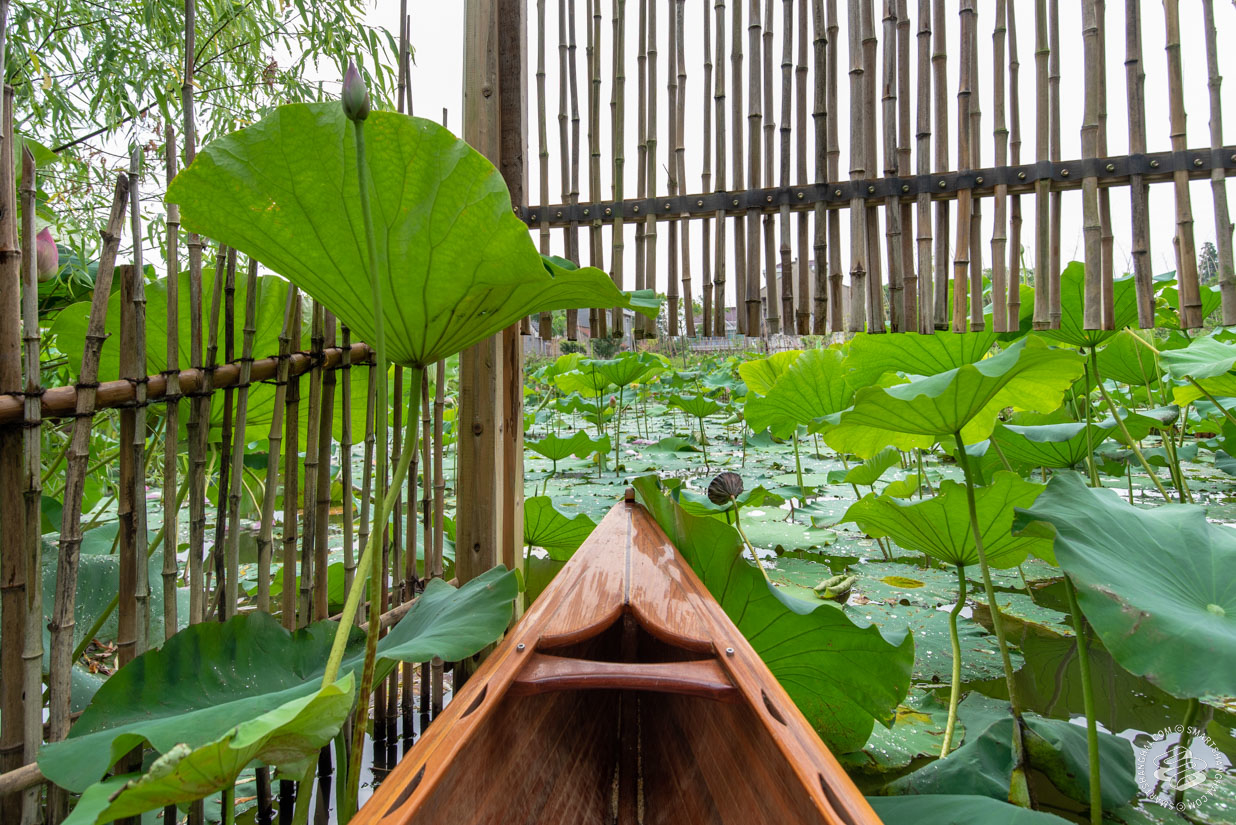 There’s cooking. And eating, of course. You can bring your own ingredients and use their shared kitchen, which opens up towards the rice field and has a firewood stove and oven. Or let Moqi and the family prepare your meal. Meals are mostly organic vegetables and some river fish and shrimp. Uncomplicated, down-to-earth and so, so satisfying. 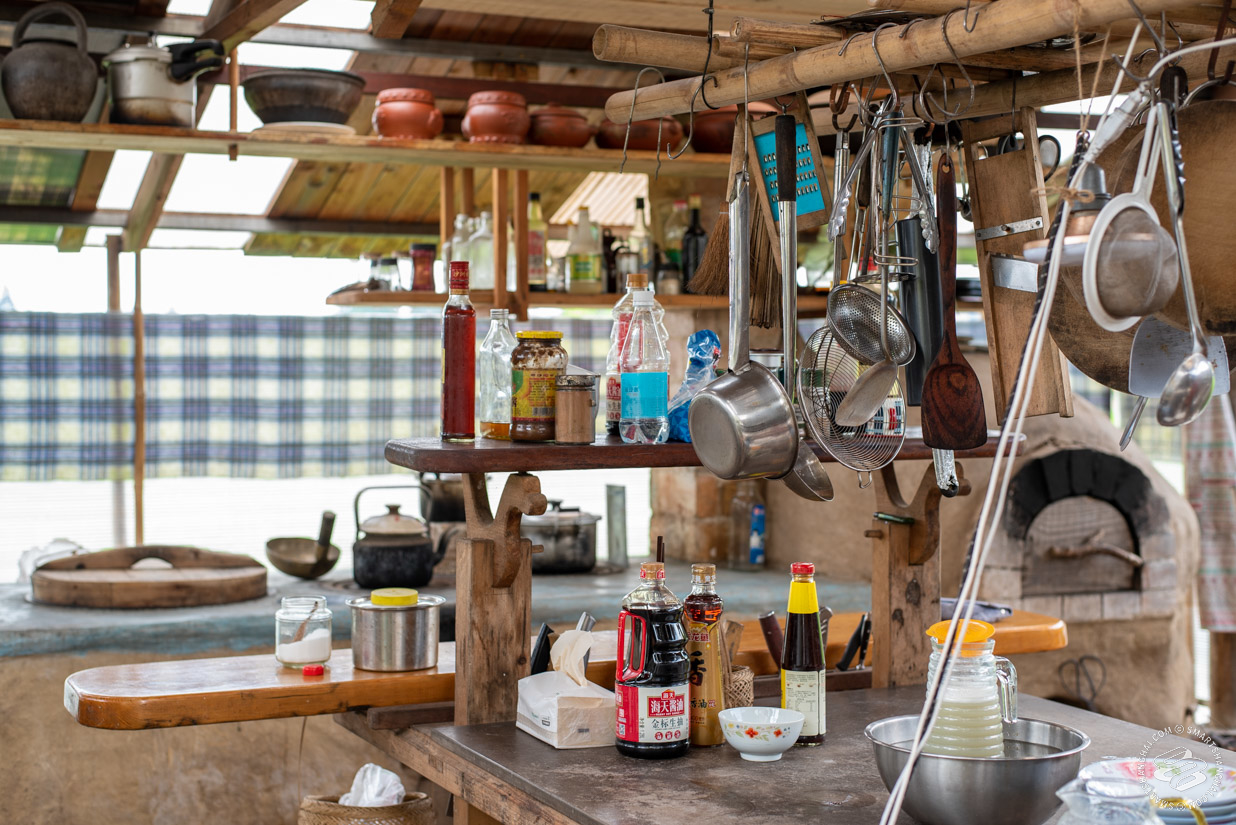 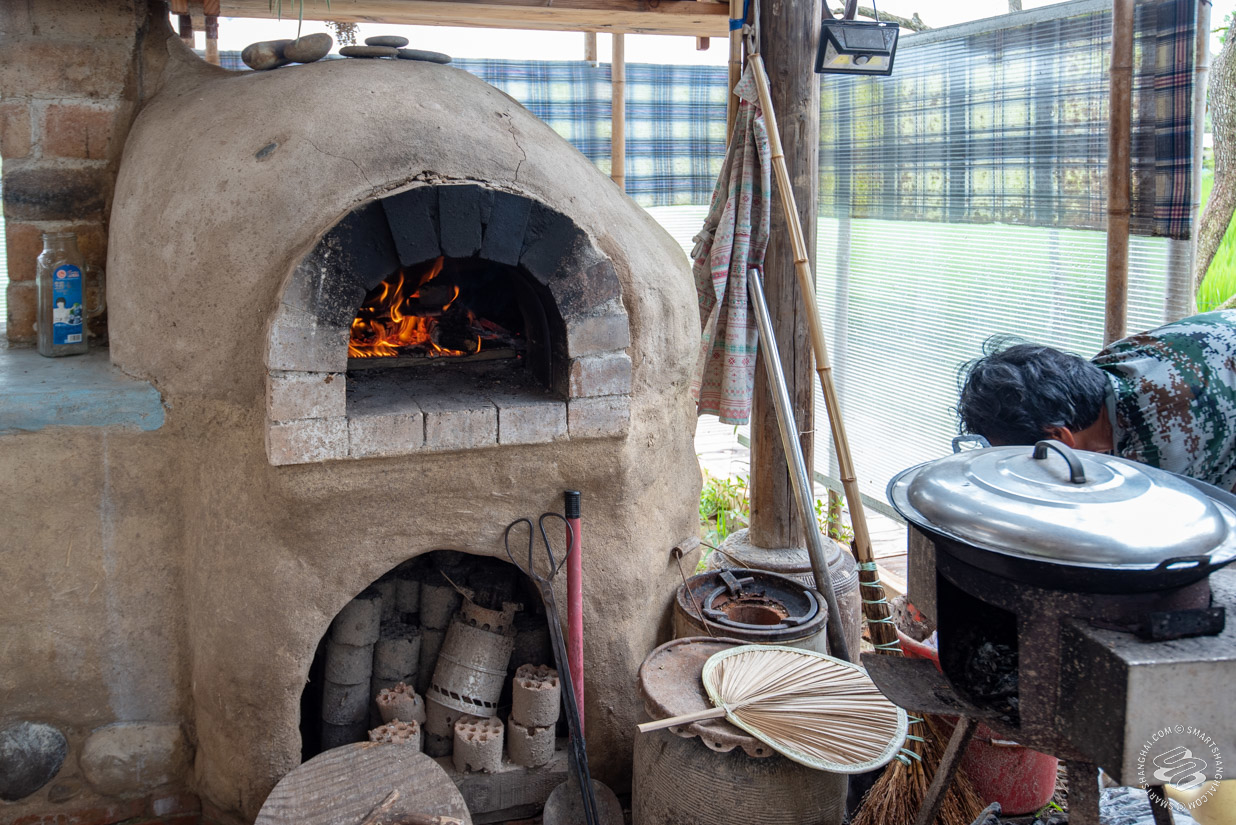 We also asked for a special arrangement, a lotus-themed dinner of fried lotus petals, fresh lotus seeds and Moqi’s signature, Beggar’s Chicken (叫花鸡) wrapped in lotus leaves and mud, and then baked in the firewood oven. Xiong put the wooden picnic table out on the lawn and we ate it all as we watched the sun set over the fields of Heartland. Unforgettable. 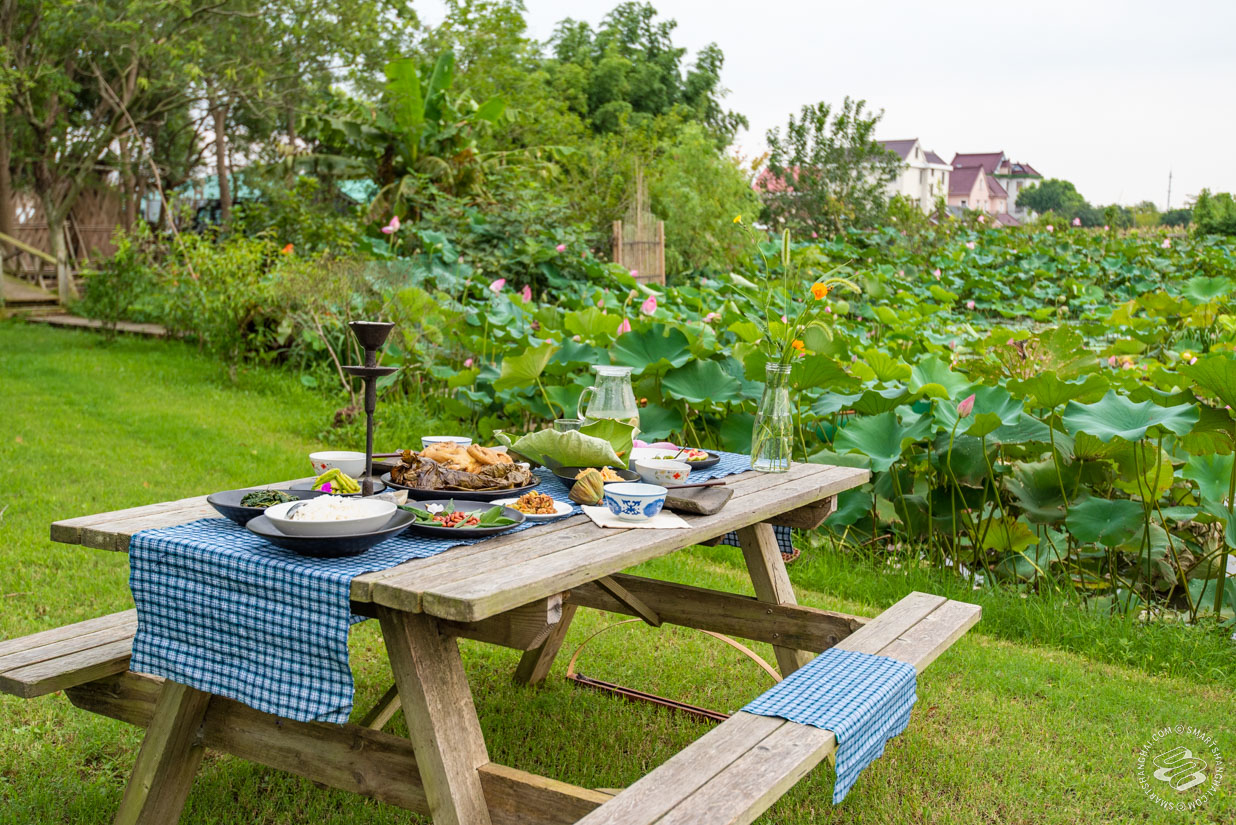 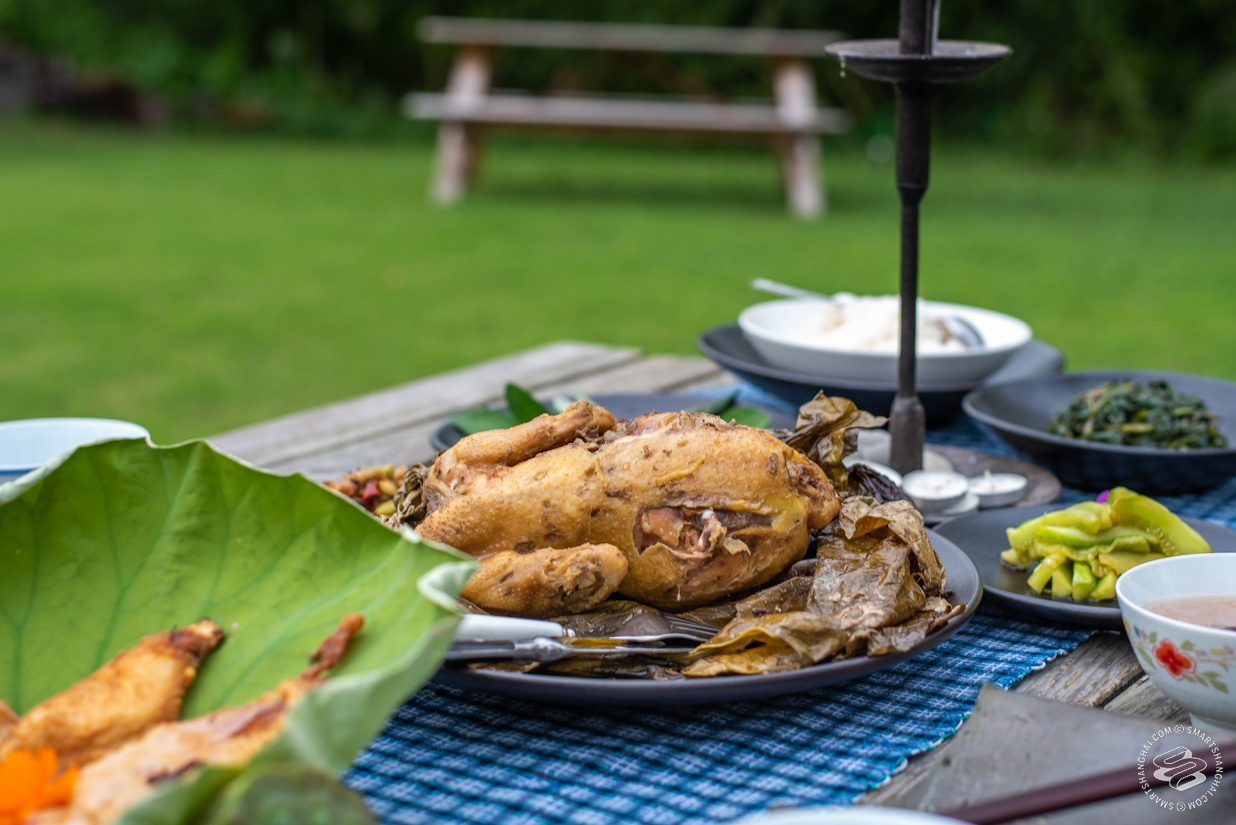 There’s camping. You can bring your own tent or use one of Xiong’s. If weather permits, there’s a wooden platform that rises out of the rice fields to camp on, if you'd like to stay closer to the stars. 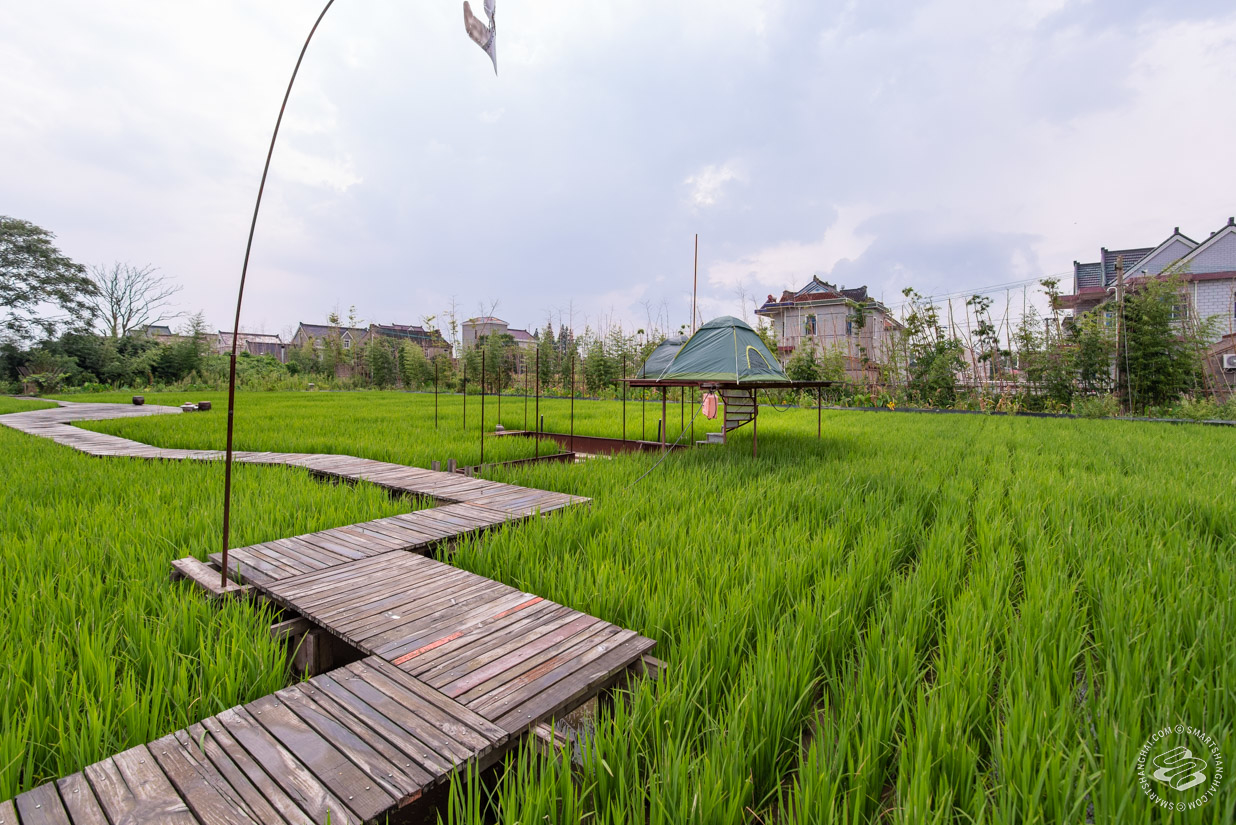 Do your morning routines. Rural mornings are the best. No need for an alarm clock: the roosters and ducks will wake you. Bring a yoga mat or a book or a coffee grinder and some good beans and enjoy whatever quiet rituals you have in peace.

Learn about cloth weaving. It's the family’s specialty. Moqi’s mother practices Chongming’s cloth weaving technique, which is now listed as National Cultural Heritage. She'll let you watch as she weaves beautiful patterns into the cloth on her 100-year-old wooden looms. Spend some time exploring the island and its shores. Chongming is massive and mostly rural. Heartland is near the gorgeous Dongtan Wetland Park. Spend an extra day and go there too.

Getting There and Things To Expect

Getting there is simple: Didi. It’s about 300rmb per trip and another 50-100rmb in highway tolls. If you can rent a car and drive yourself, even better.

Then there's the not-so-simple: be mindful about the lifestyle of yours hosts, obviously. Try to be as eco-friendly as possible: bring your own water bottle, for example. Try not to use any disposable plastics. And no pets — there are always little chicks and ducks running around that might not play well. Be mindful of the farmland and crops: people do live off it.

Relax and enjoy the beauty of the rural landscape, but don’t expect to be waited on hand and foot. There’s no fancy dining like you might find at a hotel. You do your own dishes, you clean up the mess you made if you’ve borrowed cookware and used the family’s open kitchen.

In the summer there will be mosquitoes and bugs. During winter it’s going to be cold. That’s country life.

Heartland is not a place for the “glamping” genre of getaways. Treat it like you are visiting a friend’s house. 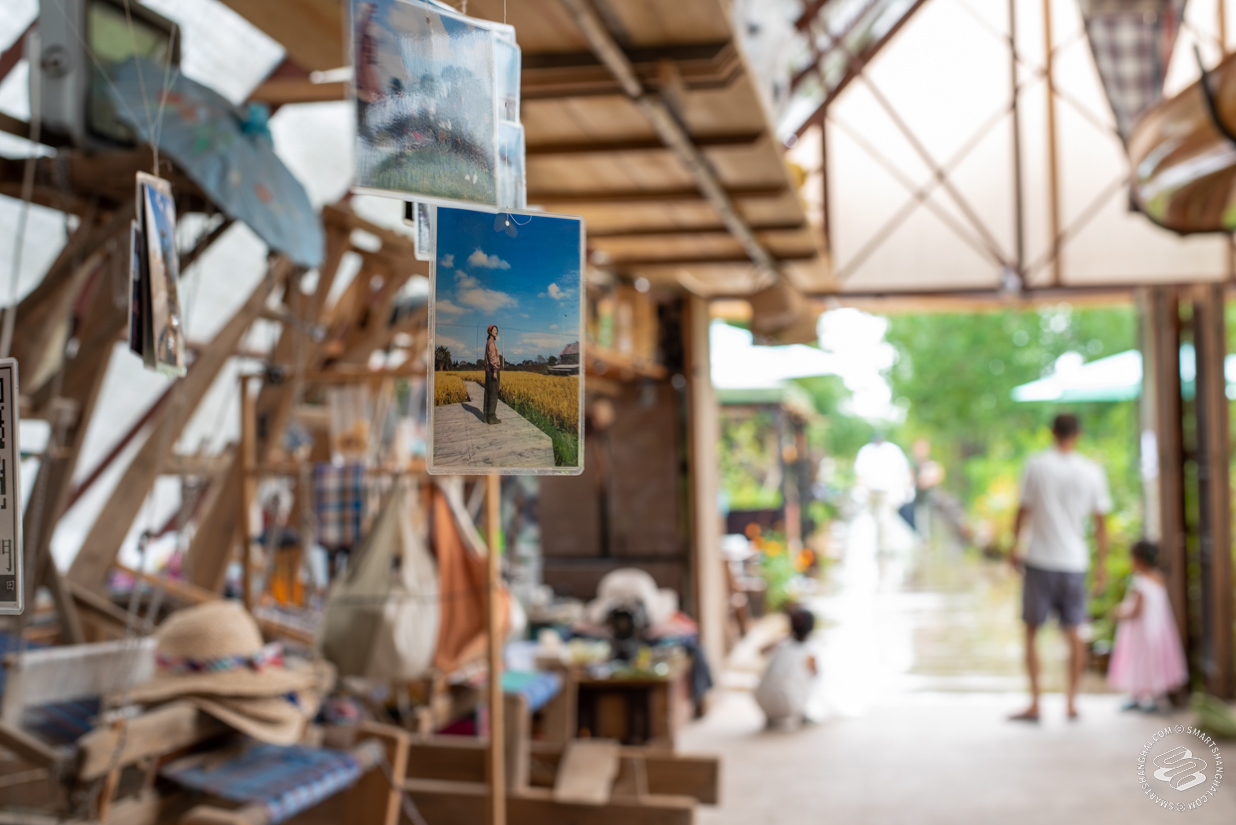 If you want pampering, stay at the five-star Hyatt Regency Chongming and drop by the farm for a half-day trip instead.

The charge to use the space and facilities is 145rmb per person per day, which covers your essential needs if you bring your own tent and food.

You can use one of Xiong’s tents for an additional 80rmb per person per night. They have a pillow and sheets. If you do that, it'll be 225rmb for the day/night.

Breakfast is 30rmb, lunch or dinner is 75rmb. Let the hosts know in advance how many meals you'd like.

None of that is essential. I spent the weekend happily without doing any of the stuff I mentioned. Being in the countryside alone does magic for city folks. You really don’t need anything extra. 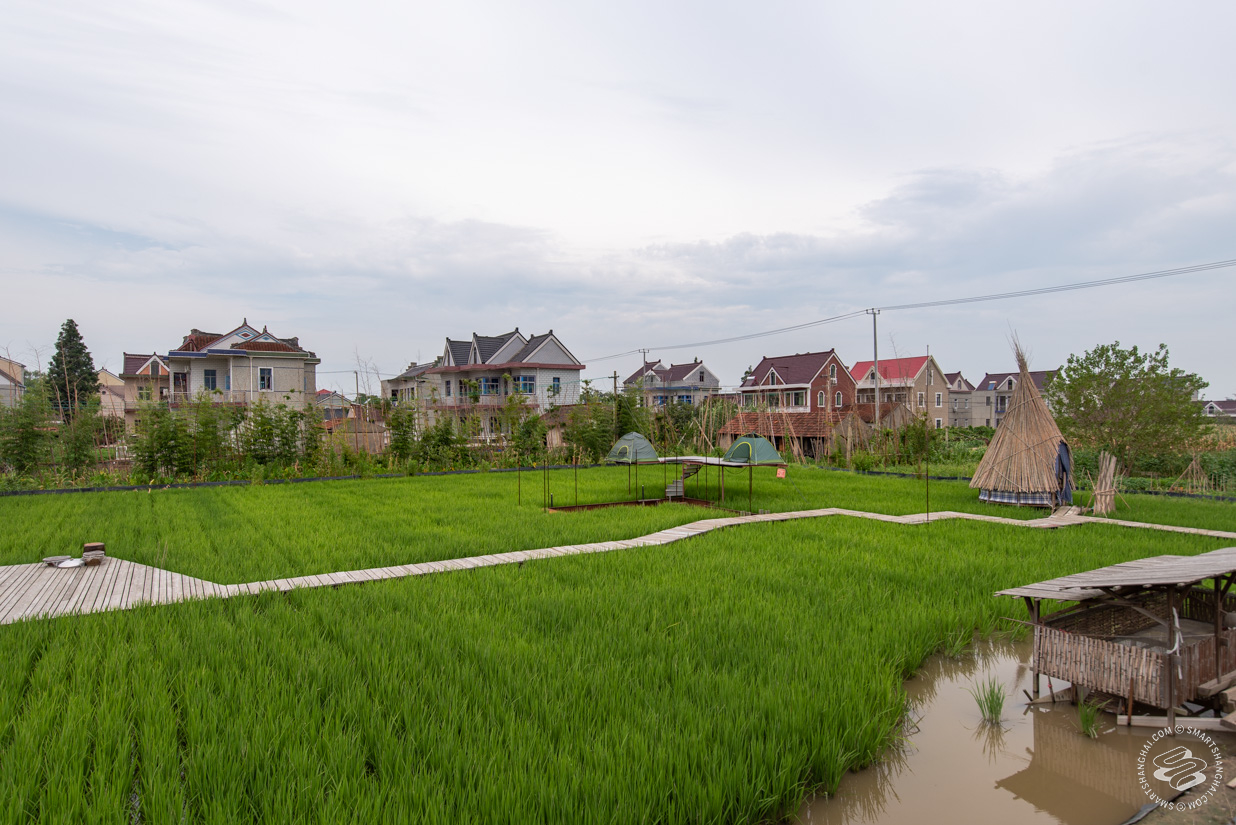