By SmSh Feb 19, 2021 2021-02-19 Activities
Take this weekend as an early glance of the summer, because the sun will be out and temperatures are going to reach 25ºC. Shanghai isn't usually known for its great outdoor experiences, but we here at SmartShanghai have pulled together a few evergreen options, as well as some parks, for folks to help embrace the sun's warm glow. See what's nice and enjoy the weekend! A 25-km asphalt pathway in Pudong, that stretches across the Huangpu River and connects Yangpu to the Xupu Bridge. Back in 2008, SmartShanghai had Tested out the trail with a bike ride and wrote about their experience. The path crosses through parks brimming with nature, and a dedicated jogging lane borders the bike lane. If you come from Puxi with your own bike, take one of the ferries (all of them take bikes) or simply rent a Meituan bike near the trail.

The Pine at Ruijin From the people behind Light & Salt, this fancy-looking French restaurant is located on the verdant grounds of the highly photogenic InterContinental Shanghai Ruijin hotel, a beautiful park right in downtown Shanghai. This is the first weekend that they are opening their terrace. Reservations are highly recommended. 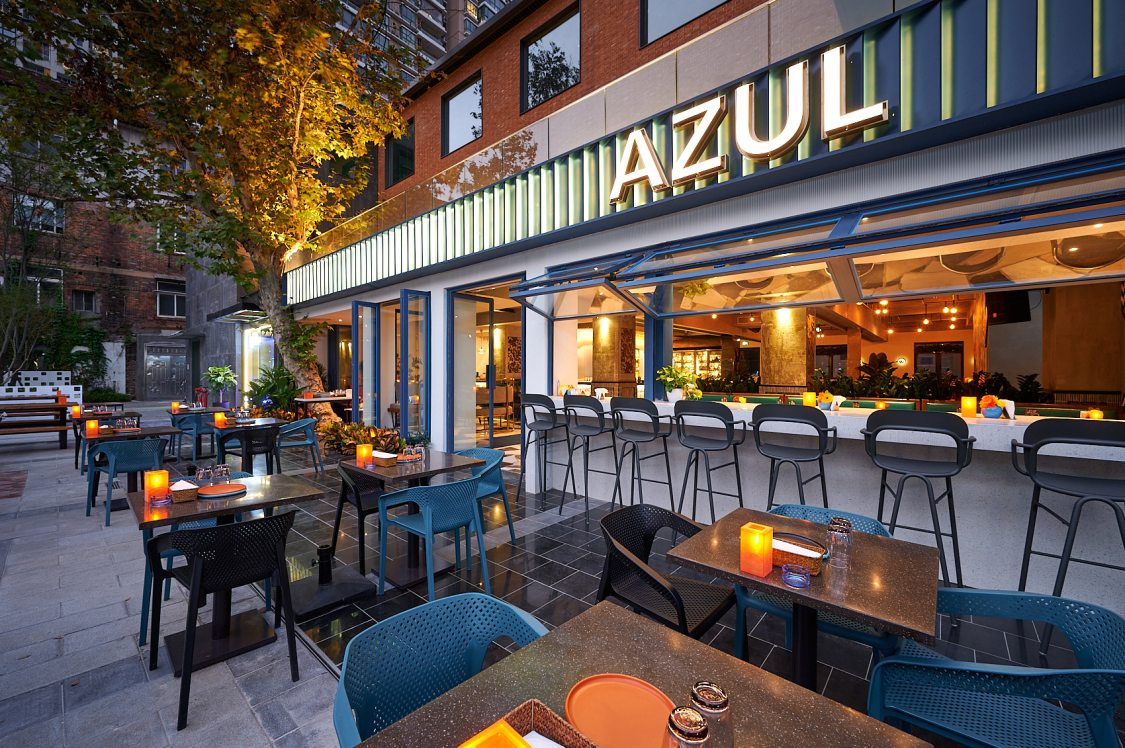 Shankang Courtyard only opened late last year but has already developed a reputation of having some of the best and most popular patios in Shanghai. One of them is Azul, Prolific Peruvian restaurateur Eduardo Vargas' re-re-boot of his flagship brand formerly located on Wukang Lu (and Dongping before that). Spanish, South American and Mediterranean ideas in the form of (probably) shareable plates, all in the fresh Shan Kang Courtyard complex. Unlike other parks in Shanghai, tucked between skyscrapers, Houtan Park has serious countryside vibes. Impressive, considering this used to be a shipyard and steel factory. Lots of wild greens and flowers along the way, plus some fish and tadpoles in the stream. The park is quite scenic and comfortable to hang out in. Bring a blanket and a picnic. Free entry, open 6am to 6pm. 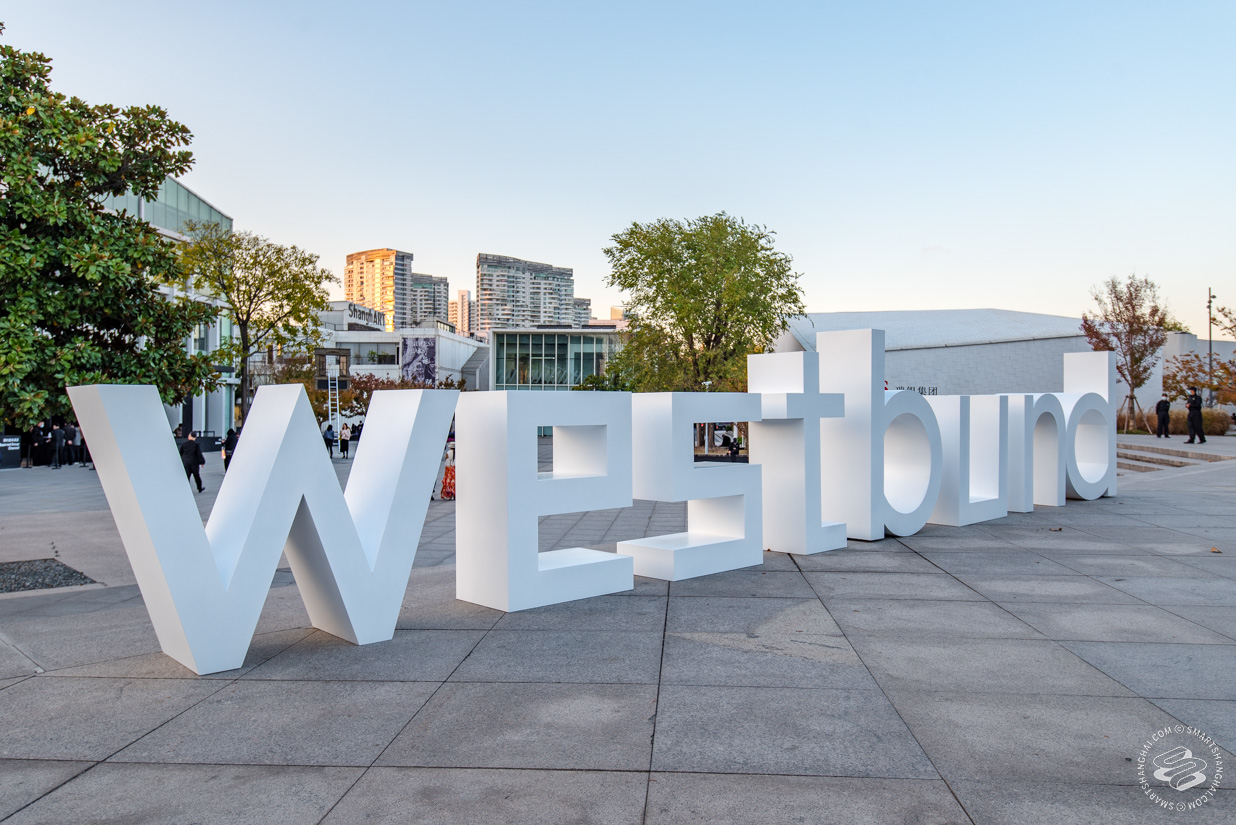 There's a lot happening at the southern part of the Westbund, where some of Shanghai's best art museums are located. If you haven't been down there, go for a stroll along the huangpu river and visit Centre Pompidou, YUZ Museum and the West Bund Museum. Celeb chef (RIP Gray Kunz) restaurant at The Middle House hotel, a half-moon shaped bar/lounge/restaurant hugging the outside of Taikoo Hui. Terrace is the big, big appeal. Big comfy chairs and prime people-watching over the Starbucks Reserve. They've got a three-course weekend brunch for 238rmb. Probably the busiest and dog-friendliest patch of green lawn outside of West Bund's dog park. Plus, this one has a lounge with great food at good prices attached. When the lawn isn't available, there's still some seating outdoors, and during summertime, they throw open the glass front to create a seamless space. It's casual but like... business casual. Good spot for a meeting, a date, or the start to a night out. They've got good deals every day of the week (188rmb for a dozen oysters every day), and a super popular weekend brunch. Kartel doesn't need much of an explanation. The well-designed French bar is one of Shanghai's best roof-top bars with great views of downtown Shanghai. The place is really nice. The owner is a French wine distrubter which is why the bar always has quality wines at reasonable prices. A good bet for happy hour on the roof in the warmer months. It can get busy with tourists, but with the borders being closed that's nothing to worry about this year 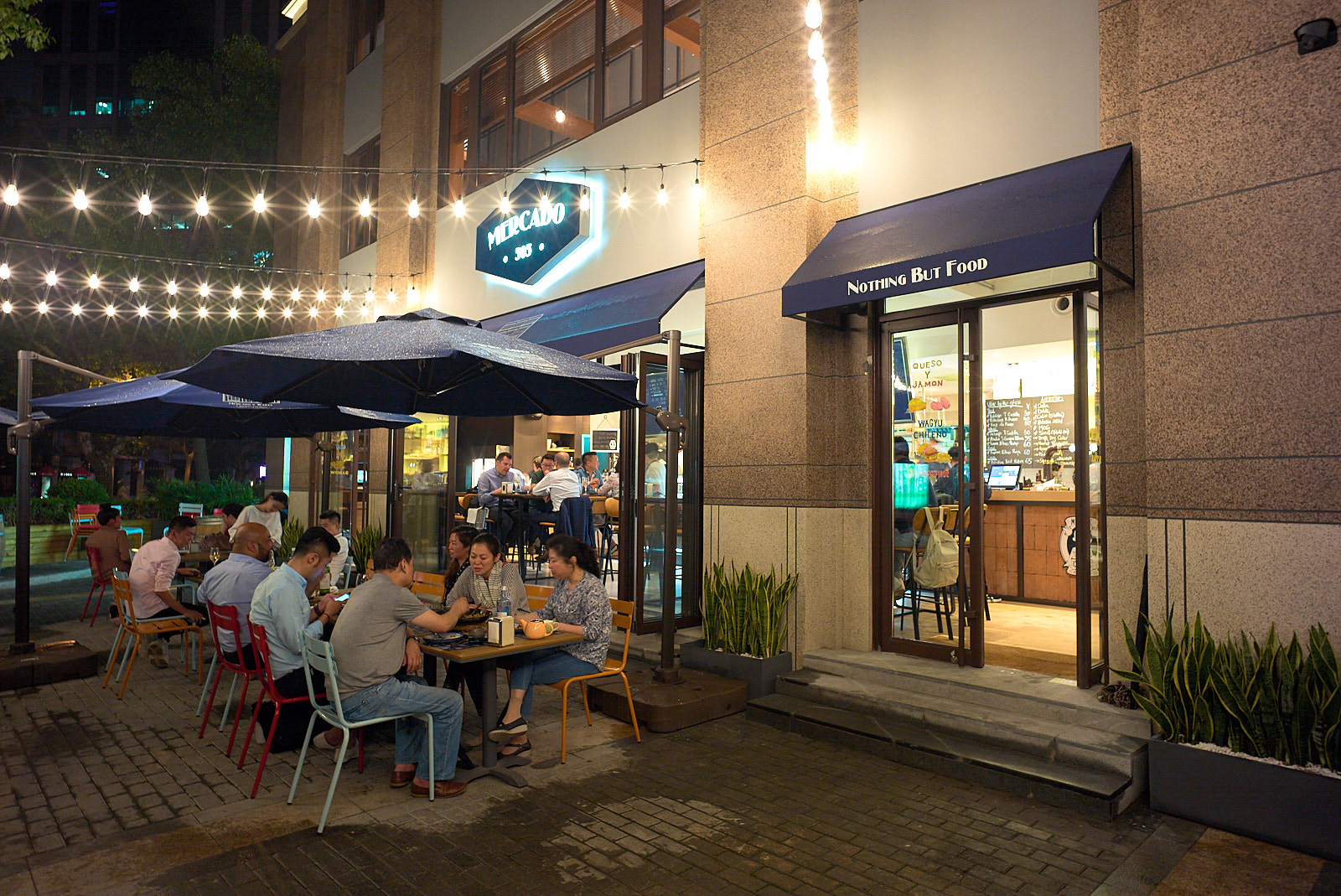 Mercado 505, occupying a prime location in among the hotels at Wulumuqi Lu and Huashan Lu, gets a lot of sunshine in the afternoon. The streetside patio's usually buzzing with Spanish expats and curious diners. The sangria is great. Nice view of Huashan Hospital. Insta-heaven. Plus sweet and savory crepes and egg-related dishes, as well as a reputable selection of wine. They are insanely popular, especially on weekends. They opened another spot on Shaanxi Lu, sadly lacking in patio seating. Go for the daily brunch and the galettes, assuming you can get a seat. 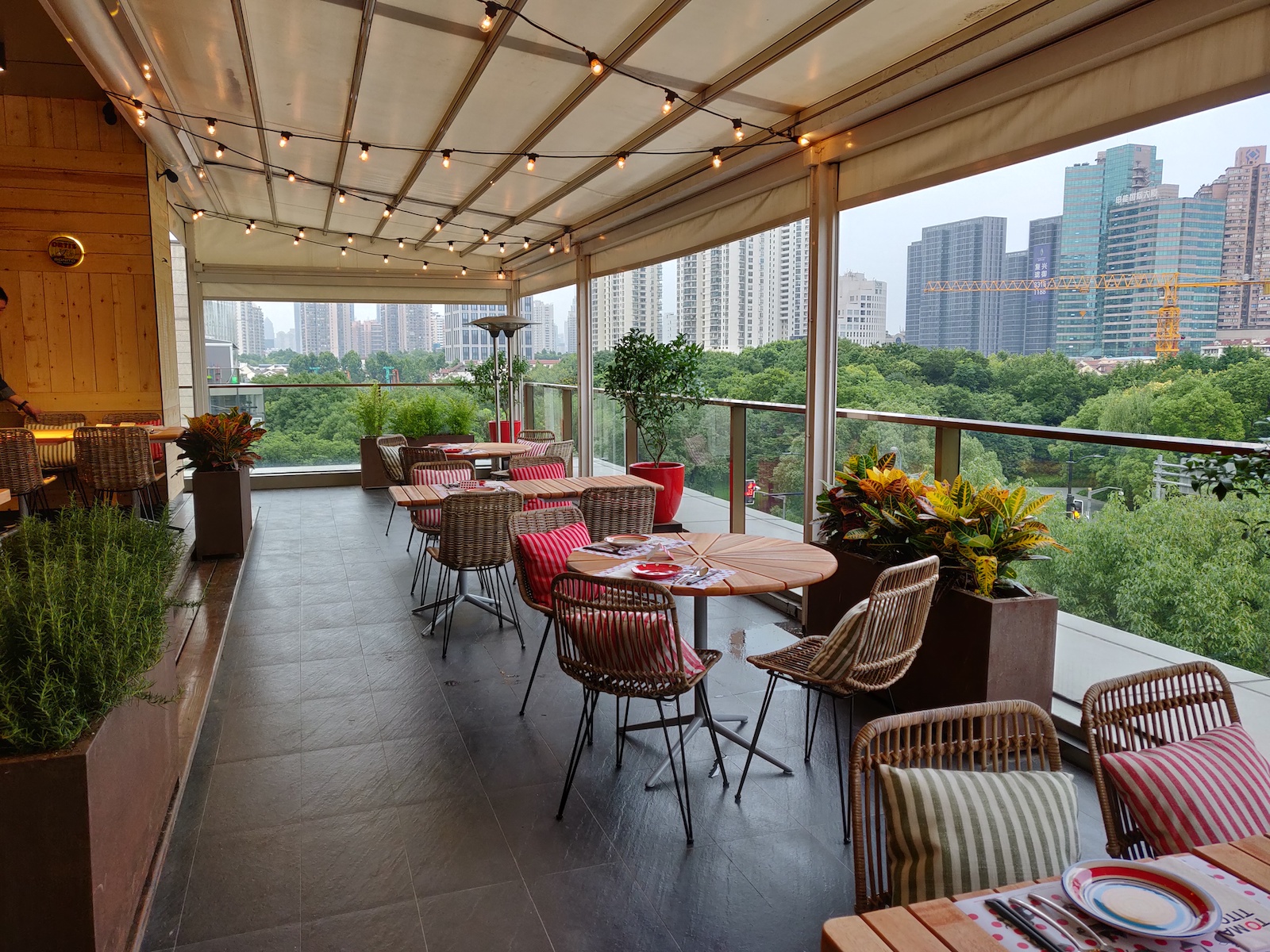 The rebirthed version of the casual, colorful and quirky Spanish tapas bar by Willy Trullas Moreno, the sssssssexiest chef in (but these days, mostly out of) town. Now with a giant south-facing terrace dominating the third floor of the Infinitus mall and overlooking the little lake by Xintiandi. Draws a vivacious Latinophile crowd. Hit it on a Wednesday for their tapas starting at 10rmb or the 158rmb weekend brunch. If you want to visit a big park without traveling one or two hours, Century Park is the one. Fine landscaping, beautiful flowers, a massive lake, and tons of green spaces to lie down on, play frisbee, or whatever. You can also rent tandem bicycles or sightseeing boats. The park has a kids amusement area too. Be aware, it's a popular one, but the sheer size of the park means it feels fairly peaceful in places. Entrance is 10rmb, with free entry for the elderly and children under 1.2m tall. It's open 7am to 6pm during the summer. 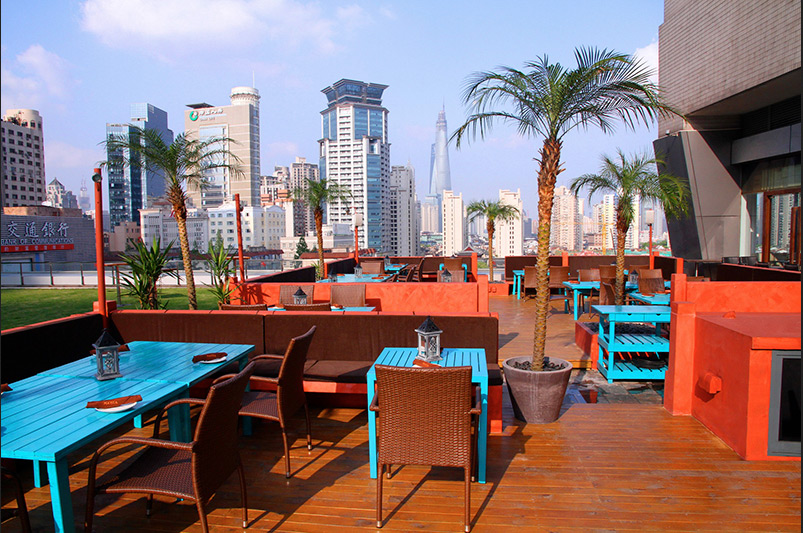 This is the second and smaller branch of Mexican mainstay Maya on Julu Lu. It occupies the sixth floor of Silver Court where it boasts a ginormous open air terrace. It's seen better days but it remains a popular brunch and drinking spot with lots of sunshine, good food and friendly service. Good for groups too. Stretching over 12.5km along the Suzhou Creek riverfront is a public pathway where people can walk, run and bike across. Originally developed as both a way to help clean the water of the heavy pollution it had faced in the last few decades and as a reclamation of the creek's historic invaluably. The pathway stretches from the Waibaidu Bridge on the Bund, through the M50 Art District and all the way down to Shanghai Central Railway station. There are plenty of beautiful historic buildings, benches, shopping centers and parks scattered across this new urban path, or grab a beer at the Beer Lady and sit at the river. A 45km-long recreational space that crosses through Hongkou and Yangpu. Back in 2019, SmartShanghai visited this expansive pathway to see how much has changed and what people can expect. This pathway reaches as far south as Xupu Bridge, near the end of West Bund. With the goal to become a new cultural hub of the city, the development of the pathway has resulted in 66 historic buildings being restored as well as new additions such as the Centre Pompidou x West Bund Museum and Sinar Mas Plaza. 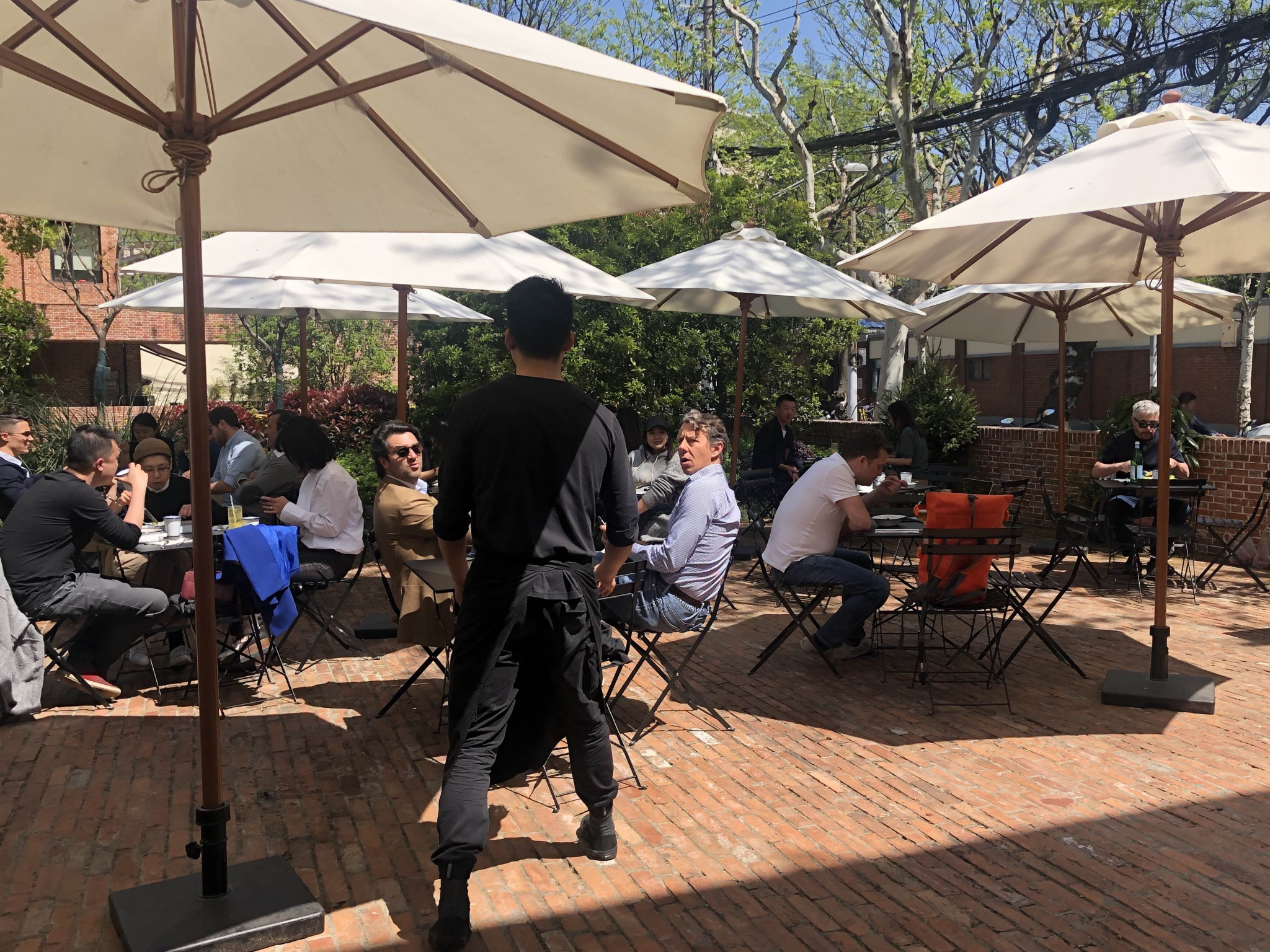 A French-Asian casual fine-dining restaurant, from founding chefs Kim Melvin (Commune Social) and Bina Yu, neither of whom live in Shanghai anymore. Still, it's the green, bamboo-ringed terrace against a low brick wall that makes it a fine place to sit and people-watch Yuyuan Lu on a lazy Saturday afternoon. 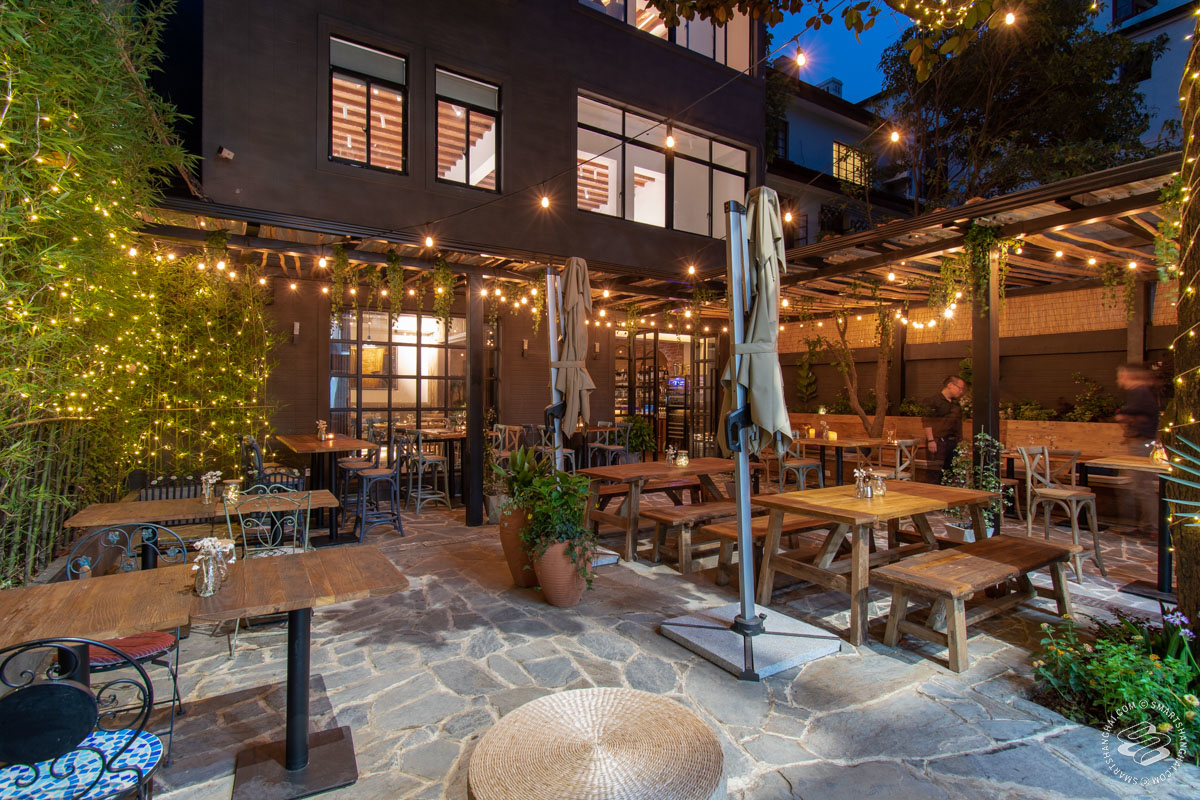 A French style wine bar, with a large selection of wines by glass and by bottle, starting at 42rmb per glass. It's the second restaurant from the Chez JOJO, serving up French food such as homemade foie gras, oysters and plates to share. It's hidden from the street (you might have to call to get in through the keycoded door), with plenty of nice garden seating. Secluded, peaceful, good for dates, small gatherings, or just a nice glass of wine in a low-key environment.