[Outbound]: An Eco-Lodge In The Middle of Nowhere, Hangzhou

Louis and Lea Chaffard left Shanghai towards the end of last year, leaving behind their lives of conference calls, free-flow brunches and sexy – if you're into conventionally sexy – corporate jobs to live in the forests of Lin’an District, Hangzhou.

This is Fais Un Voeu ("make a wish" in French), the Chaffard's new guesthouse where they now spend their days receiving guests, landscaping their half-hectare garden, harvesting bamboo shoots and gathering litter during hours-long hikes up neighboring mountains. 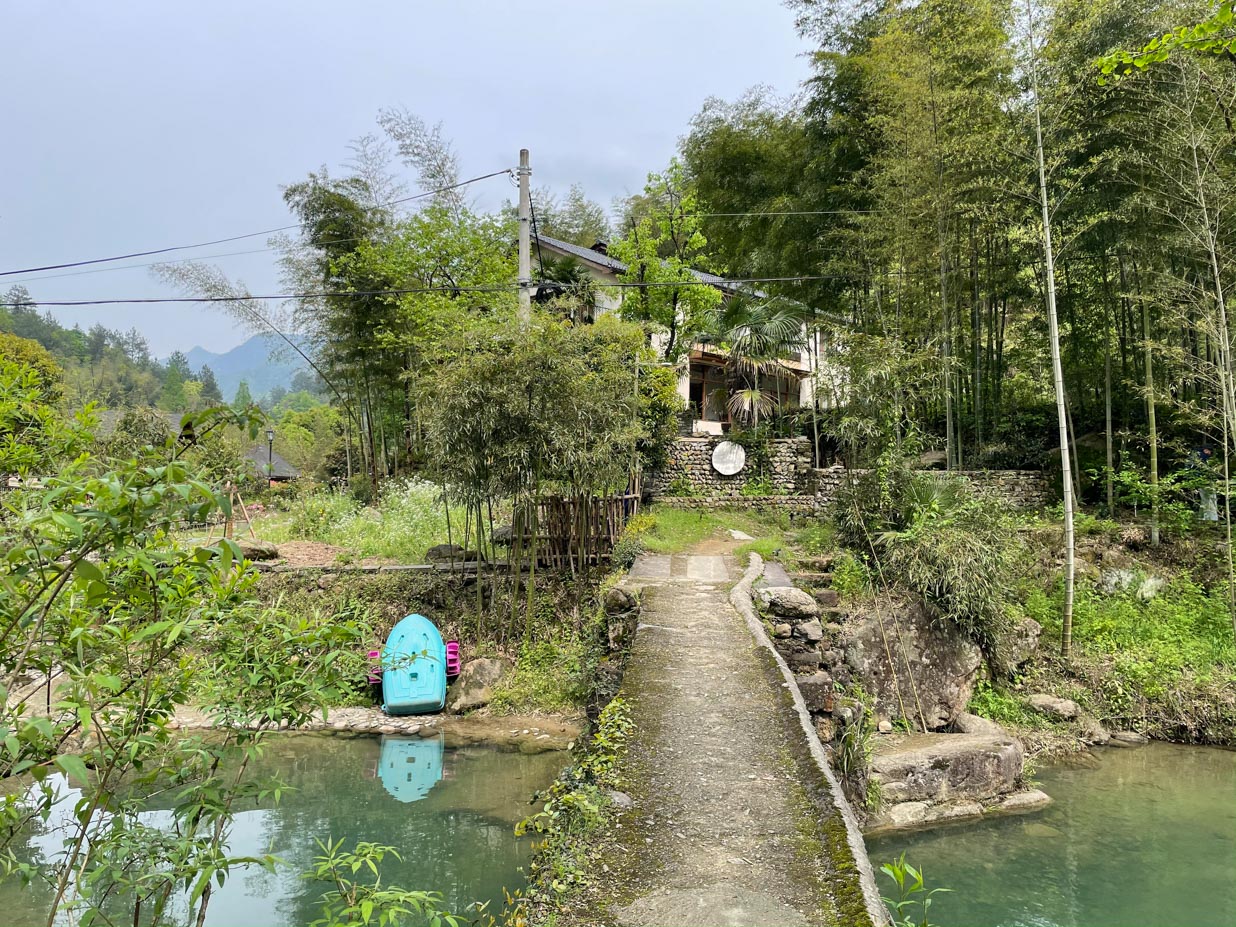 A bridge over the creek leads to the front entrance of Fais Un Voeu.

Lea was born and raised in Shanghai and had a job “…that I genuinely enjoyed, promoting big domestic documentary productions. In 2015, I got to work with the BBC to produce the reality television show 'Survivor Games,' going deep into the mountains of Guizhou with Bear Grylls and eight Chinese celebrities for a month-long wilderness survival test. I realized that even as a 'city girl,' I have a heart that yearns for nature." 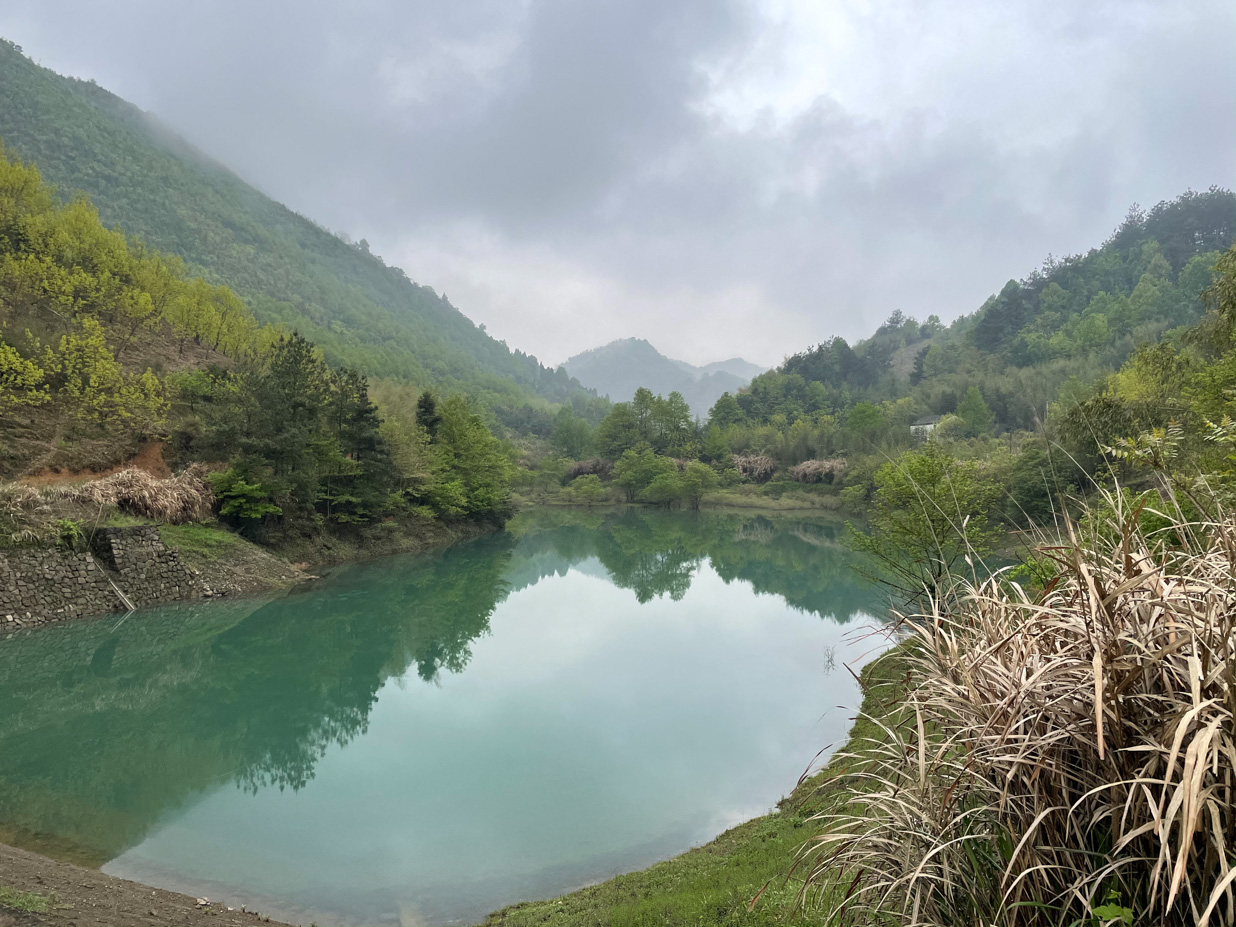 The forested areas around Fais Un Voeu. Minerals from surrounding limestone rocks give the water its distinctive blue-green color.

Lea and Louis met in Shanghai in 2016. It was also around that time that a startup that Louis had begun with his brother merged with another – a dining directory and restaurant reservation platform that now operates across Southeast Asia and Greater China. He would go on to be that company’s general manager in China for five years, before Fais Un Voeu brought him and his wife to the middle of nowhere, Hangzhou.

Louis has the kind of Shanghai success story that seduces so many to come to this city. He arrived from France in 2006 with "3,000 euros in the pocket" and spotted his first opportunity in the rental market for foreign students. He sold off that first business and, properly bitten by the start-up bug, partnered with his web designer brother to start their next company. 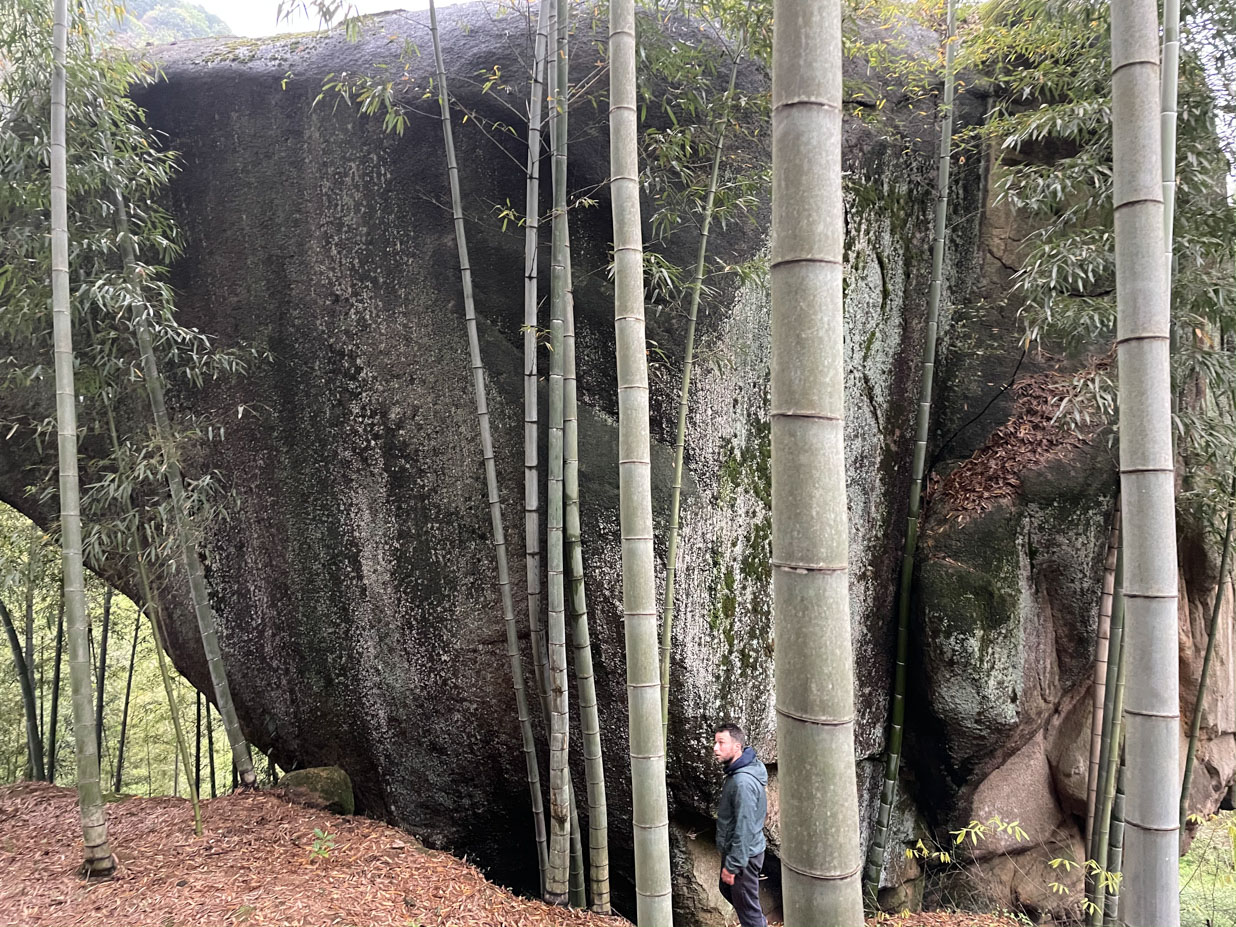 Louis, or Loulou among friends and guests, in front of what he and Lea call the “Spirit Rock”.

"Living off fangbianmian, working day and night in my living room to develop our big plan to conquer the world. Three years passed, we developed this amazing product with no traction and 2,000 kuai monthly revenue. [It was a] fantastic failure. We fell in love with our product instead of solving a problem that people have,” said Louis. 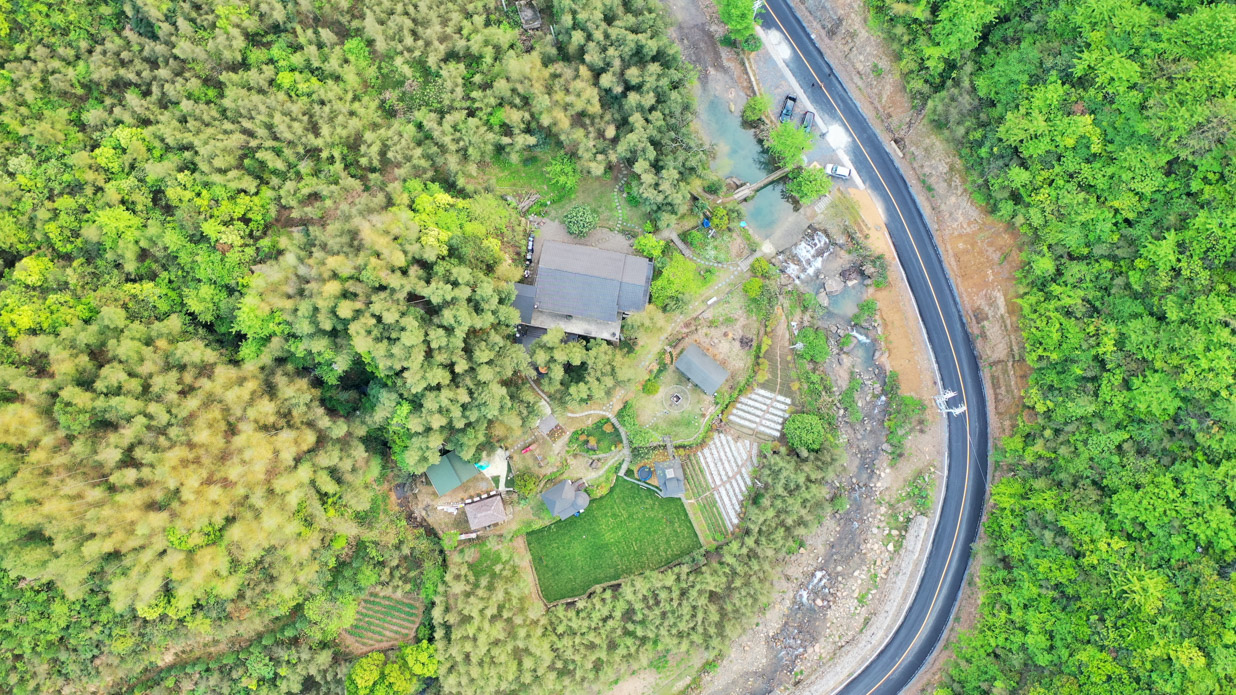 So with their next venture, the brothers zeroed in on a problem – a big one – in the food and beverage industry. They built their first automated prototype in six weeks. “Within 14 months, we were elected top ten start up in Asia by a Singaporean entrepreneurship organization,” explained Louis, during which that previously mentioned company merger took place.

Privately, however, Louis and Lea both had their eyes on a bigger picture goal. "Four years ago, my husband asked me what kind of life I want to live. A small house, a big garden. Children and animals running around. That’s what I saw in my mind, and that’s what I told him,” said Lea. So, coming out to Lin’an and starting a guesthouse didn’t happen on a whim. They planned. They saved. They made reconnaissance trips and got into soul-sucking negotiations with the landlord. “There was never a question of ‘are we making the right move?’ It was crystal clear. How we spend our time and what we do with it became more important than how much money we were making. We had our goal. We have our purpose. And it became, what are you doing every day to get there?” said Louis. 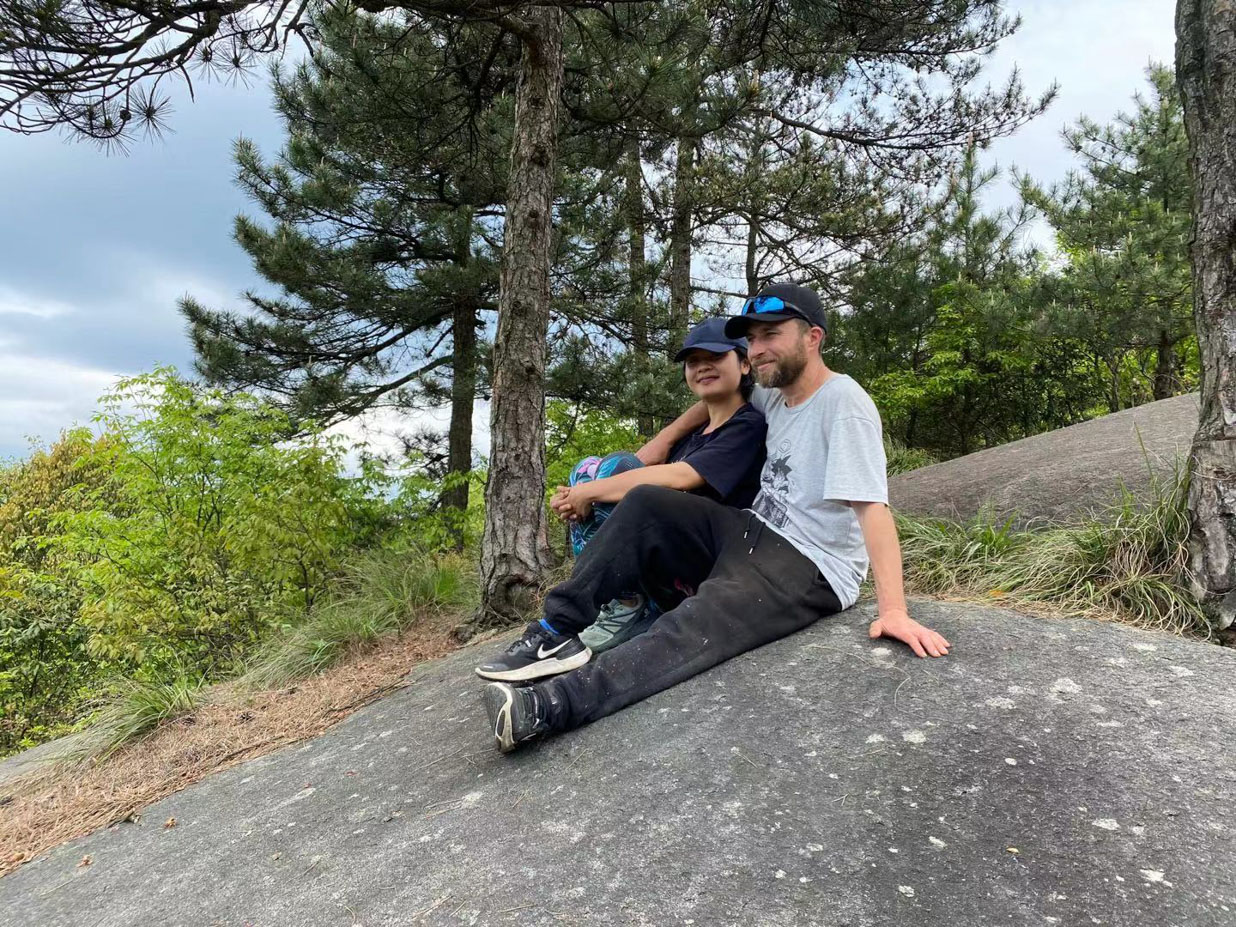 Lea and Louis Chaffard doing their thing in Lin’an.

All this to say – you'd be coming to Fais Un Voeu for the untapped nature, but also just as much for the Chaffards. They clearly want their guests to love their little slice of paradise as much as they do and are keen to get their visitors (most are coming from Shanghai, central Hangzhou and other nearby cities) to feel more closely connected to nature during their stay. 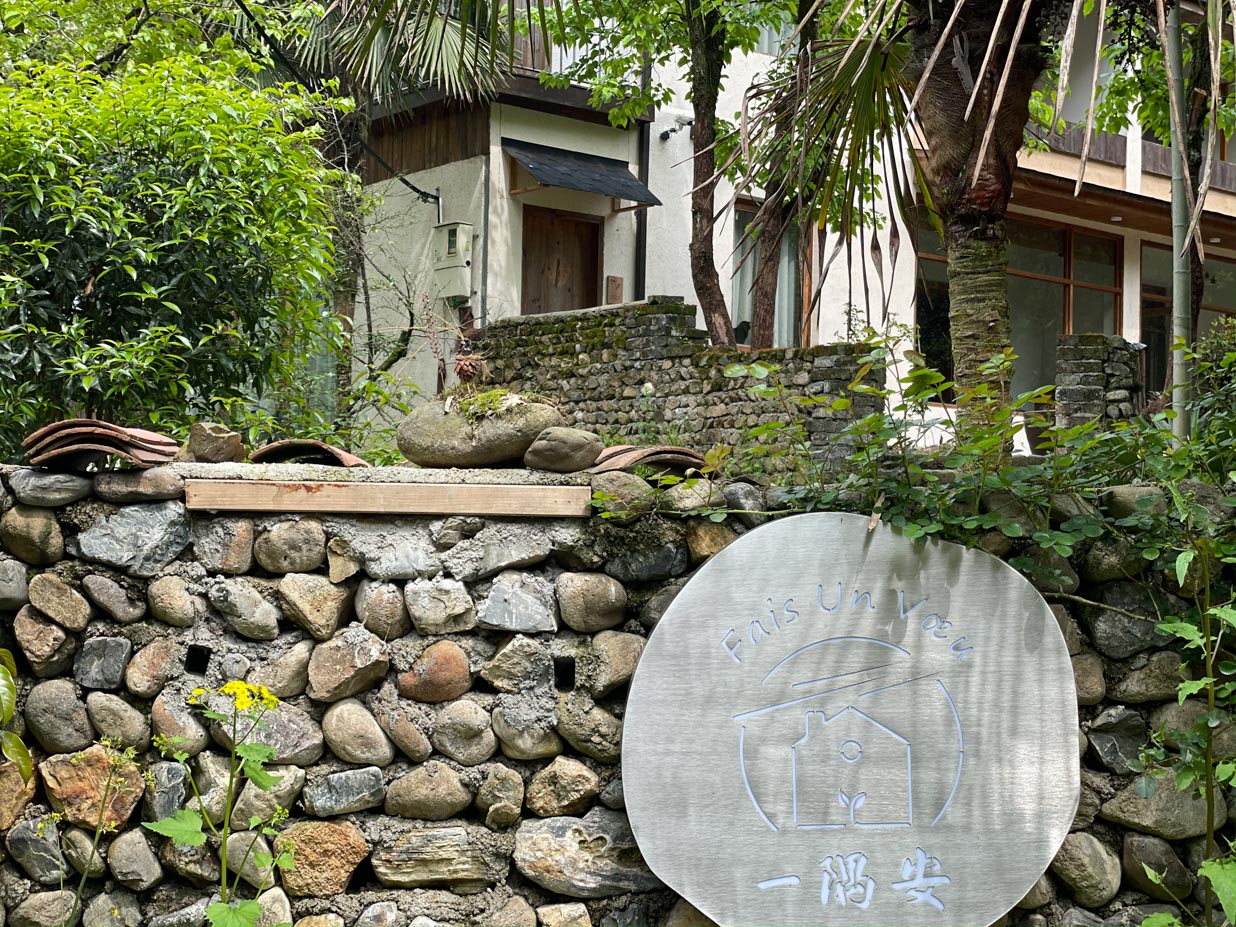 The Chinese name, Yi yu an, roughly translates to a tranquil, hidden nook.

The property is a 5-minute drive away from a small village called Heqiao Zhen, AKA Heqiao Ancient Town, which apparently has a history dating back over 1,000 years. For some context, the village rests midway between central Hangzhou and Huangshan (Yellow Mountain) in Anhui Province – roughly 120 kilometers away from each.

A freshwater creek with these wee gentle waterfalls runs along the entire front side of Fais Un Voeu. They’ve got this spot set up nicely for visitors to swim or paddle boat around, but since the main road up to Heqiao Zhen is on the other side of the creek, occasionally you’ll see a car or middle-aged neighbor pass by. 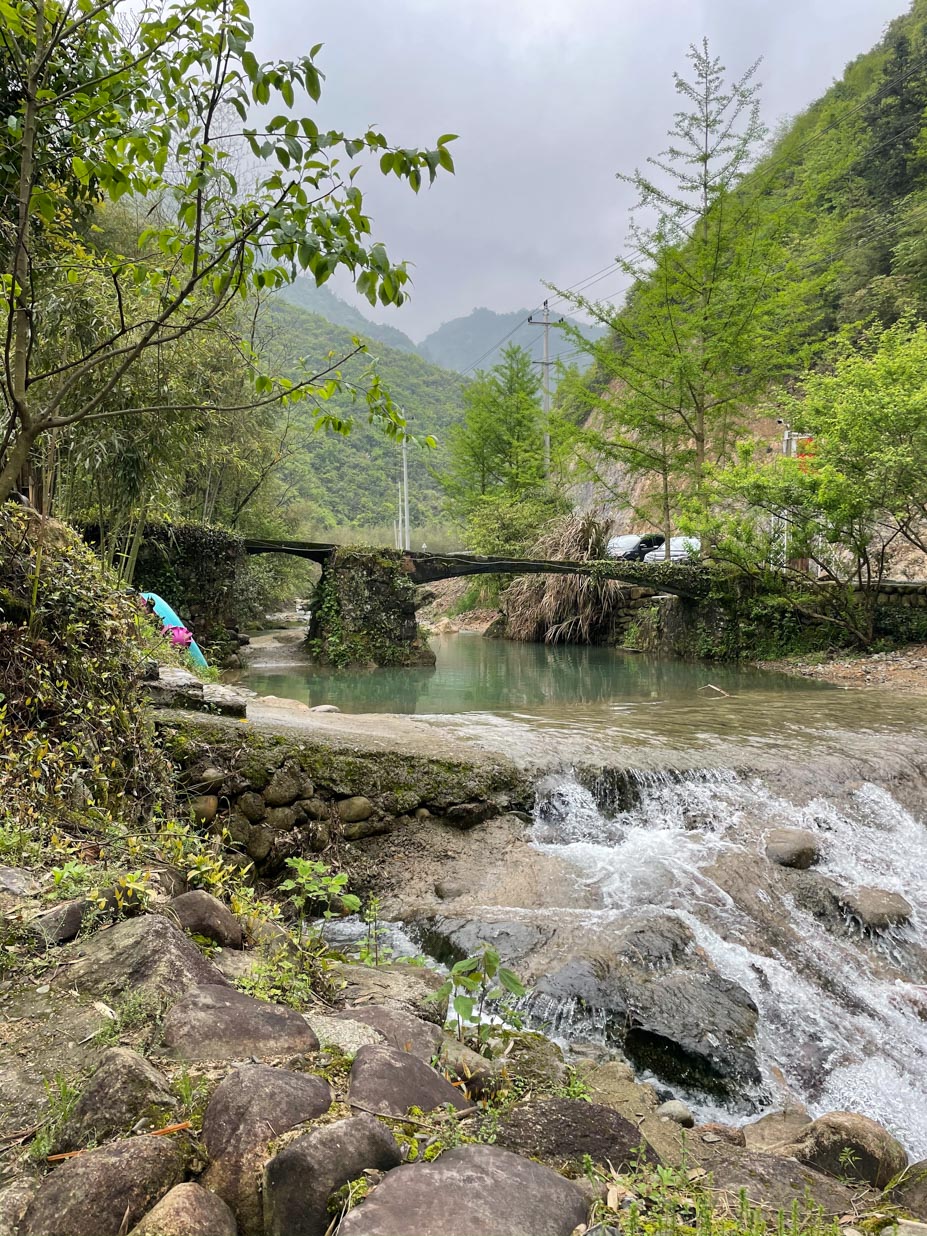 There are more secluded swimming spots nearby if privacy is what you’re after.

Deeper into the grounds are where the accommodations are clustered. The guesthouse includes 10 rooms, six of which are located within the property's main two-story lodge. The other four are standalone wooden cottages built around the garden. 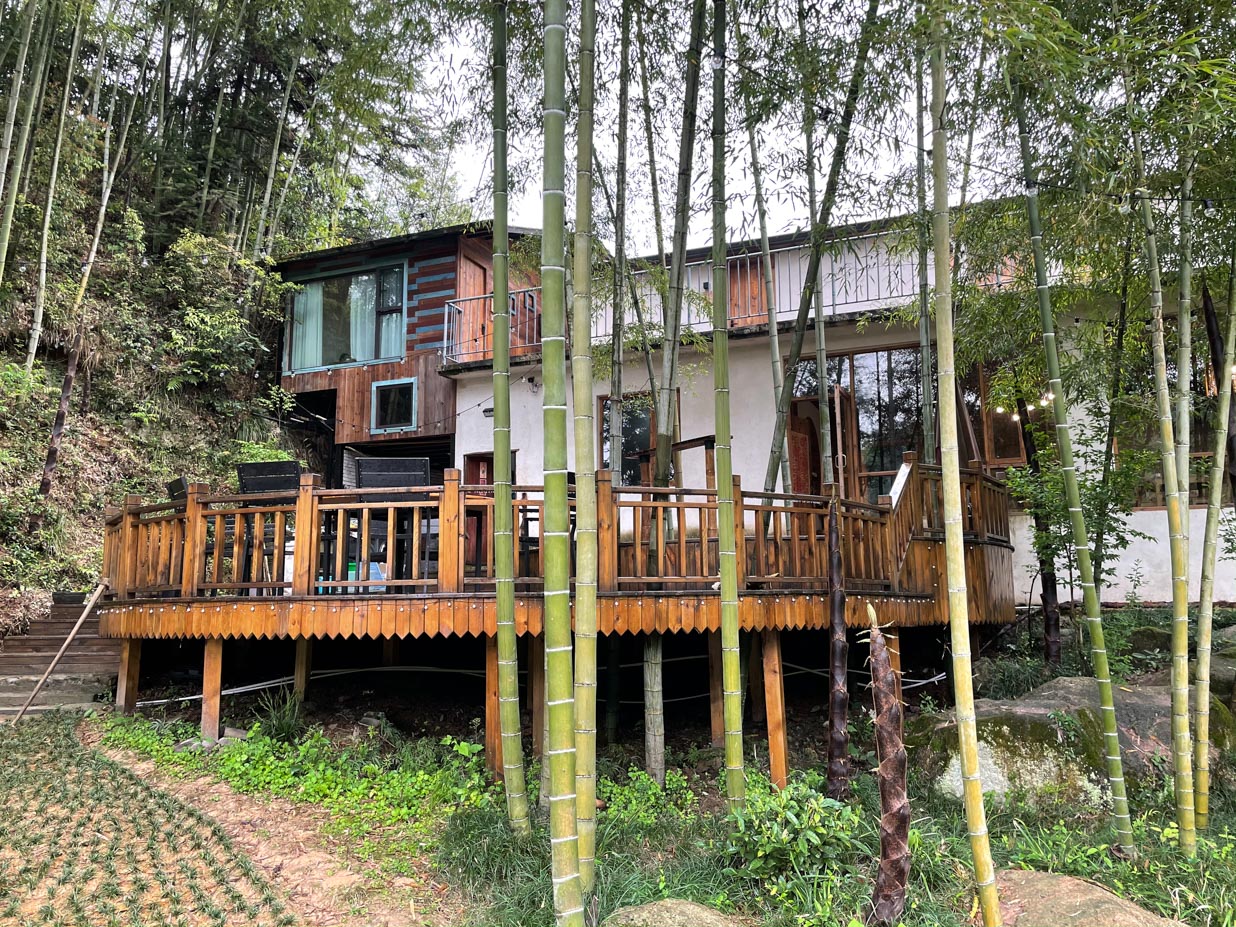 The main guesthouse, with outdoor terrace.

The rooms are nice – neither in the realm of budget-friendly B&Bs nor luxury mountainside resorts. The interiors are simple, tastefully designed and outfitted for urbanites who expect air conditioning, heating and strong water pressure during their showers. Those Kohler shower heads are streaming in water from the surrounding springs, though, which is certainly a step up from city life. 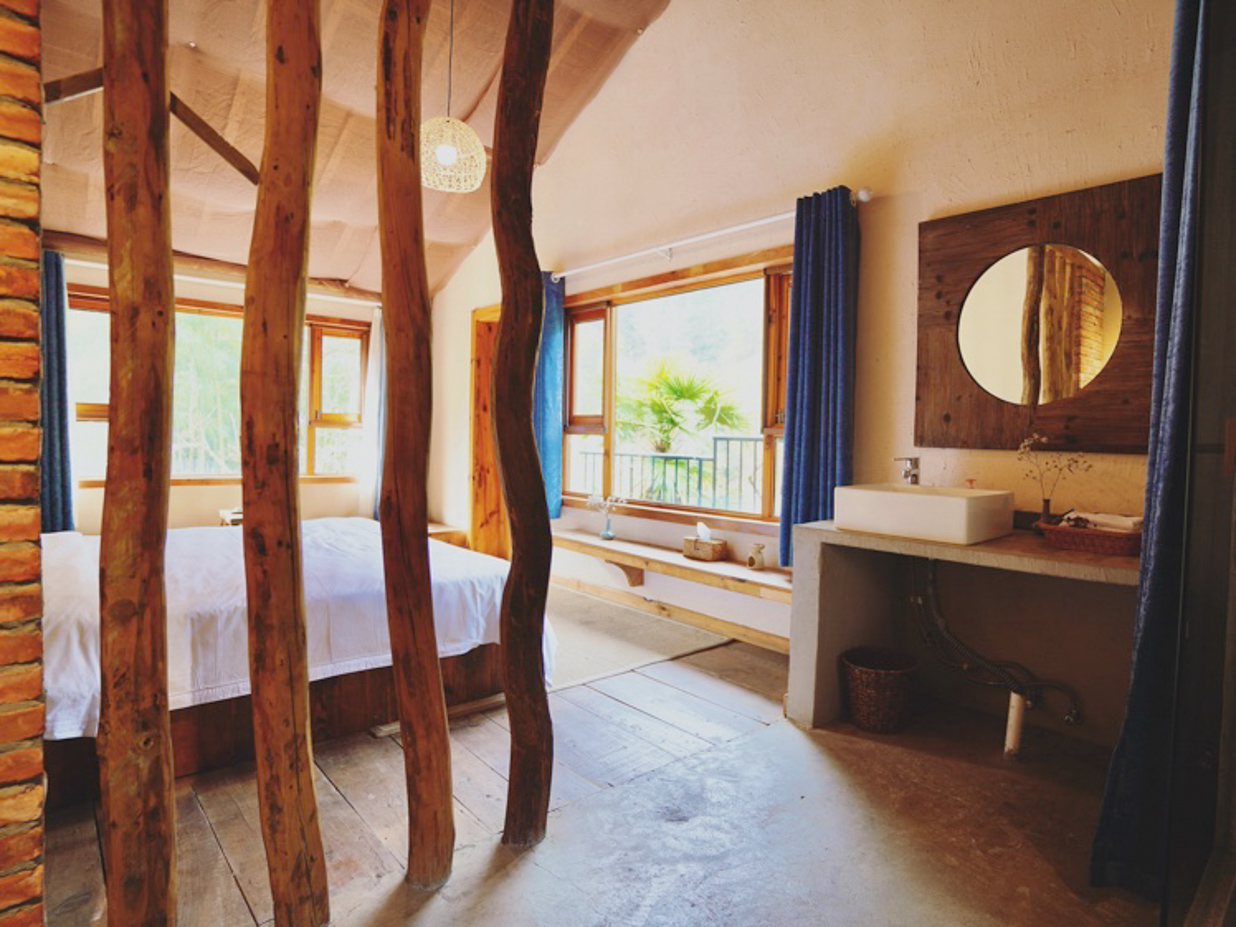 The interior of ‘Les Etoiles’ (The Stars). Image courtesy of Fais Un Voeu.

There are slight differences in the layout and design of every room. Some have balconies, some are lofts. Each has a name that’s themed on the widely adored French fable Le Petit Prince – a cute flourish that takes on more meaning once you get to know Lea and Louis a bit more.

Most of the activities that they offer are family-oriented and kid-friendly, particularly the on-site ones: paddle boating, swimming, checking out the grounds and surrounding forests, building campfires, crafting birdhouses or making pizza together. 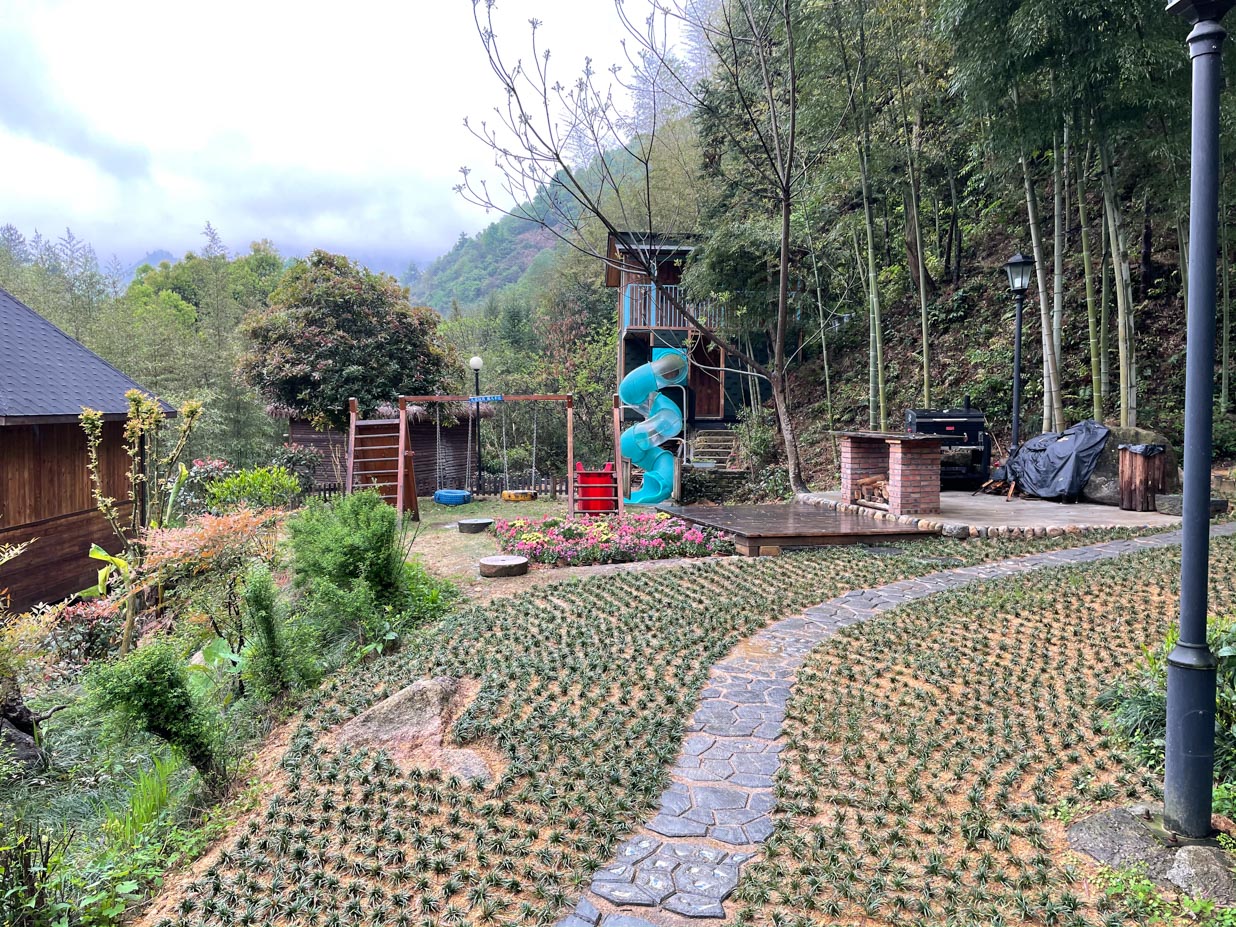 There’s an outdoor grill for group barbecues, where Lea and Louis demonstrated the simple pleasure of a grilled banana with melted chocolate. Louis and a guest trekking, talking.

The Chaffards also take guests on guided hikes. There are many trails in the area, so they’ll start by gauging your interests to see if you lean towards canyoning and waterfalls, exploring local flora and fauna or something more vigorous. Louis, a self-proclaimed "moss geek", is fascinated by the biodiversity of the area and enjoys pointing out what he sees along the way.

There’s also an abandoned village nearby, where flowers and forest vines have taken over the traditional stone houses that have been left behind. The homes still have some memorabilia left behind by their previous tenants, like government-issued calendars dating back some decades, or a poster of a Baywatch babe. 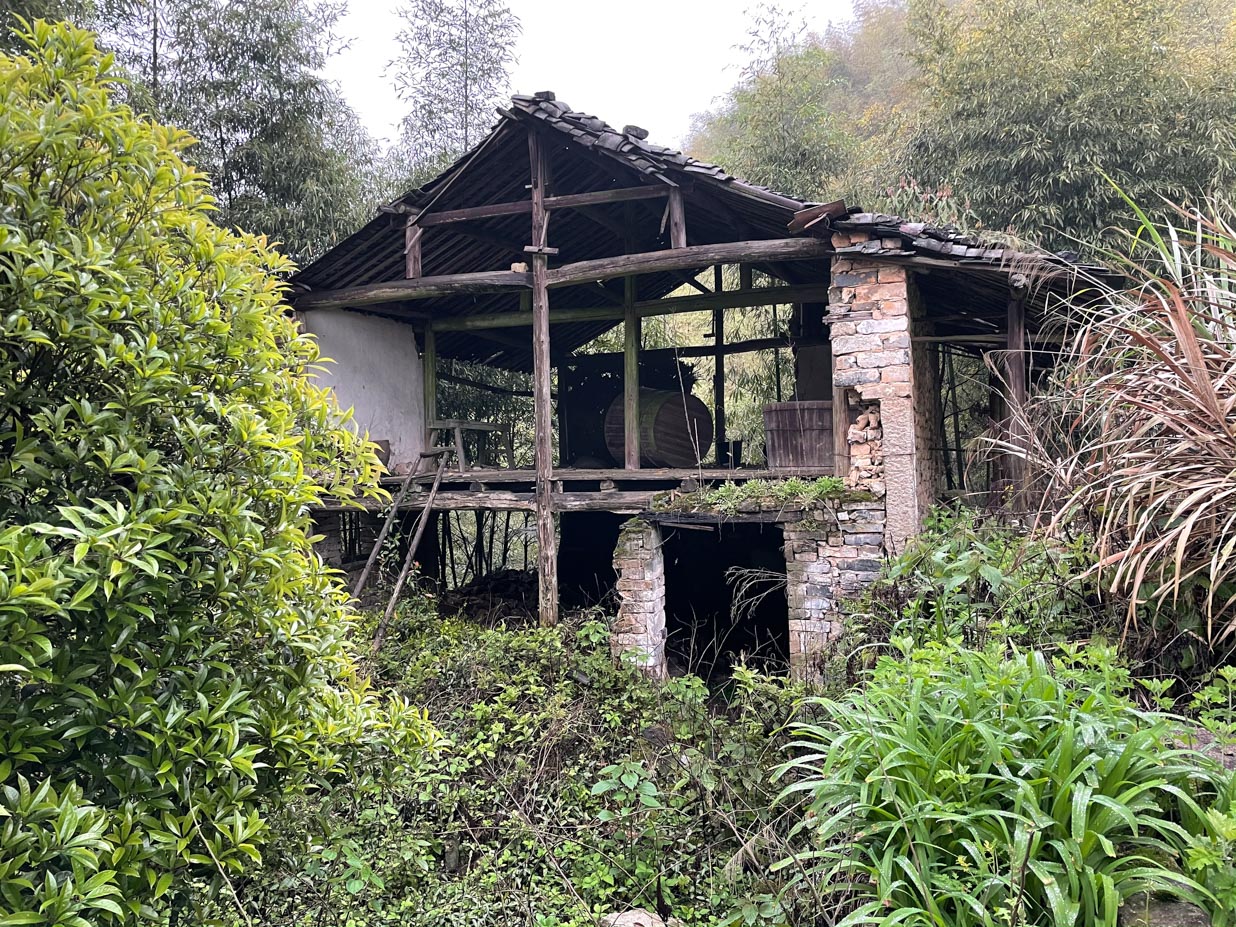 Some of the abandoned homes look truly creepy from the inside, so here’s a non-creepy shot of one from the outside. 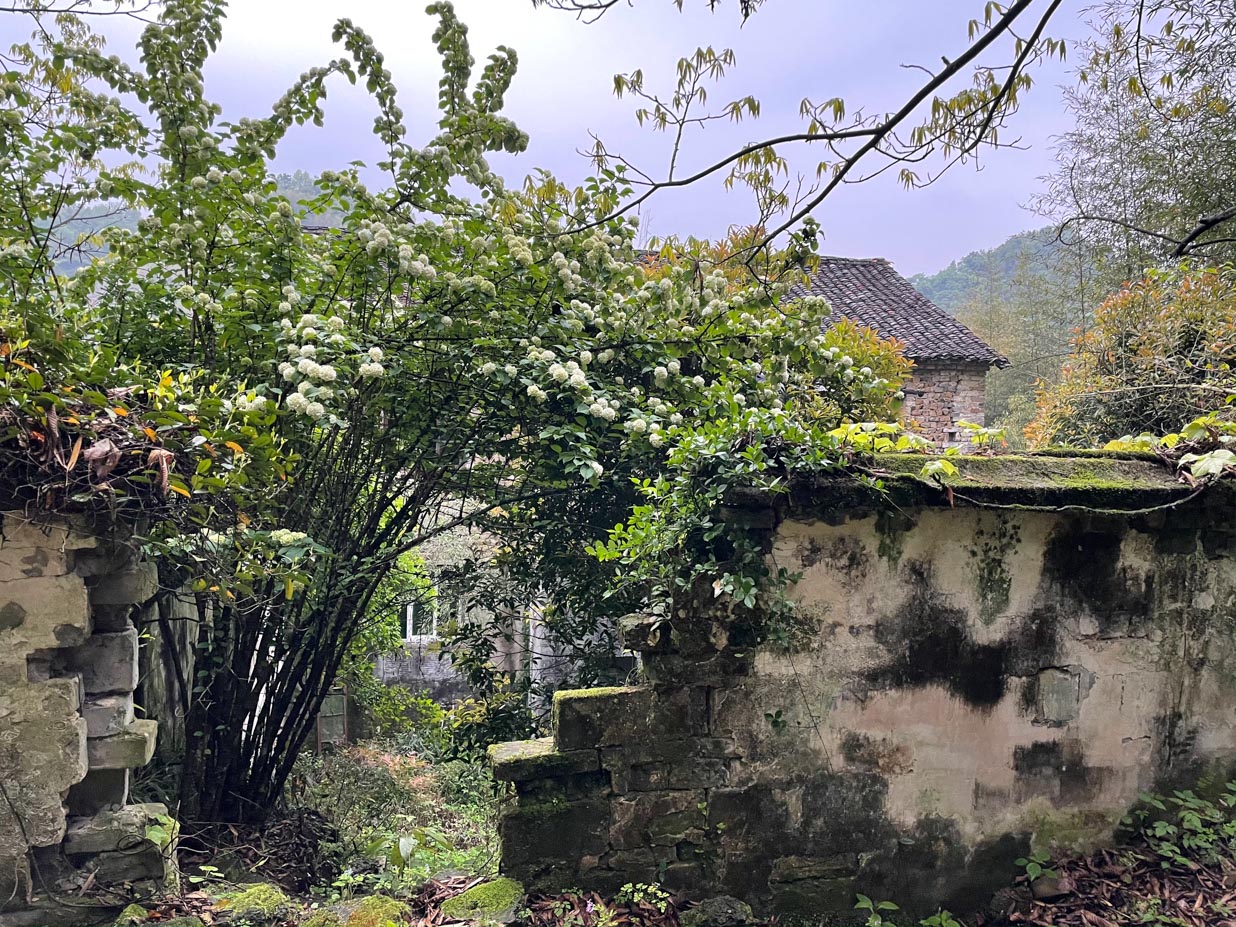 For a still-functioning village, you can visit Heqiao Ancient Town, where an aging population is living out their best octogenarian lives amidst a composite of ancient buildings, retro Chinese storefronts and attempts from uh, upper management, to attract tourists with shiny new public toilets and some truly lame anime mascots. 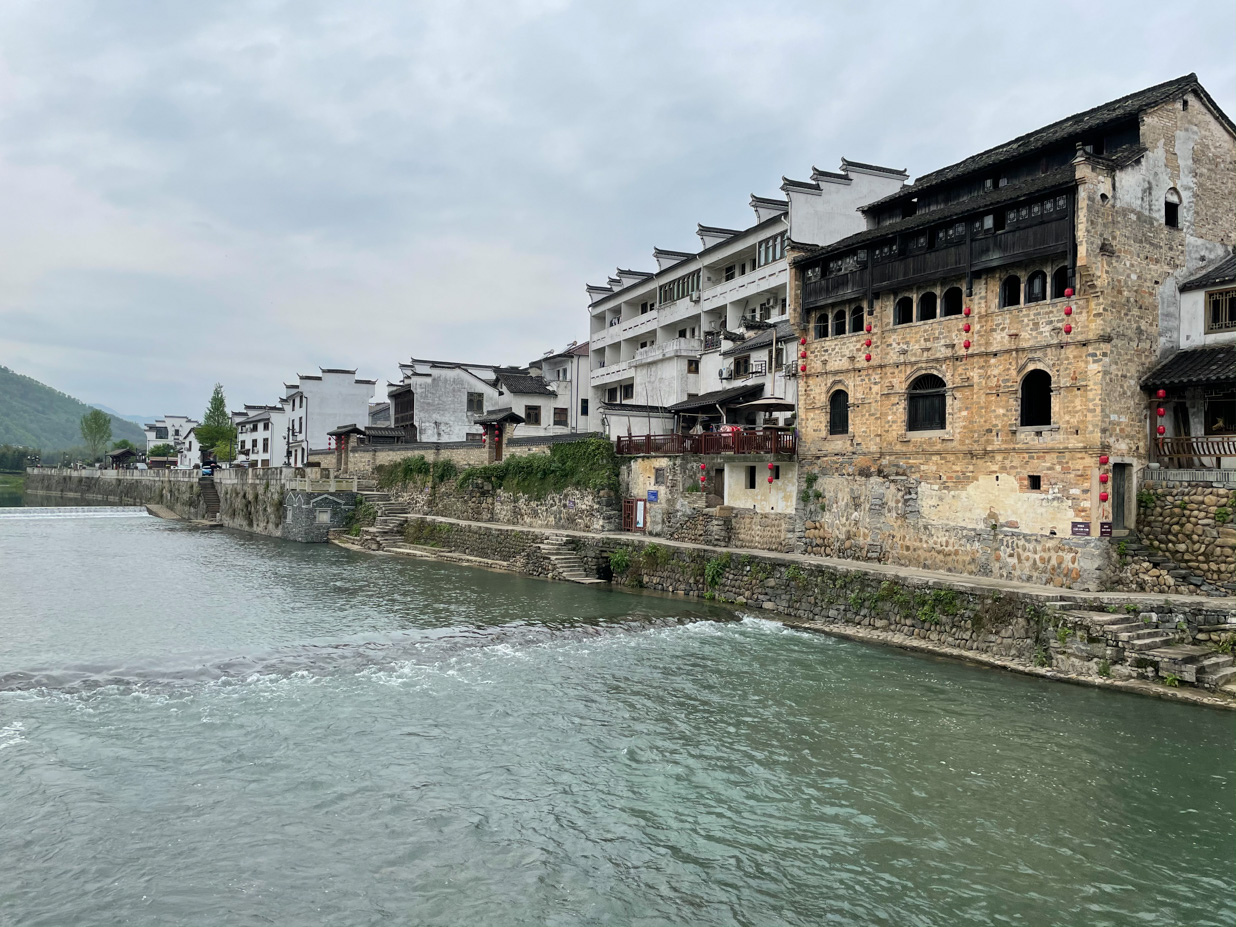 Heqiao Ancient Town. The building on the far right once functioned as an apothecary long, long ago. 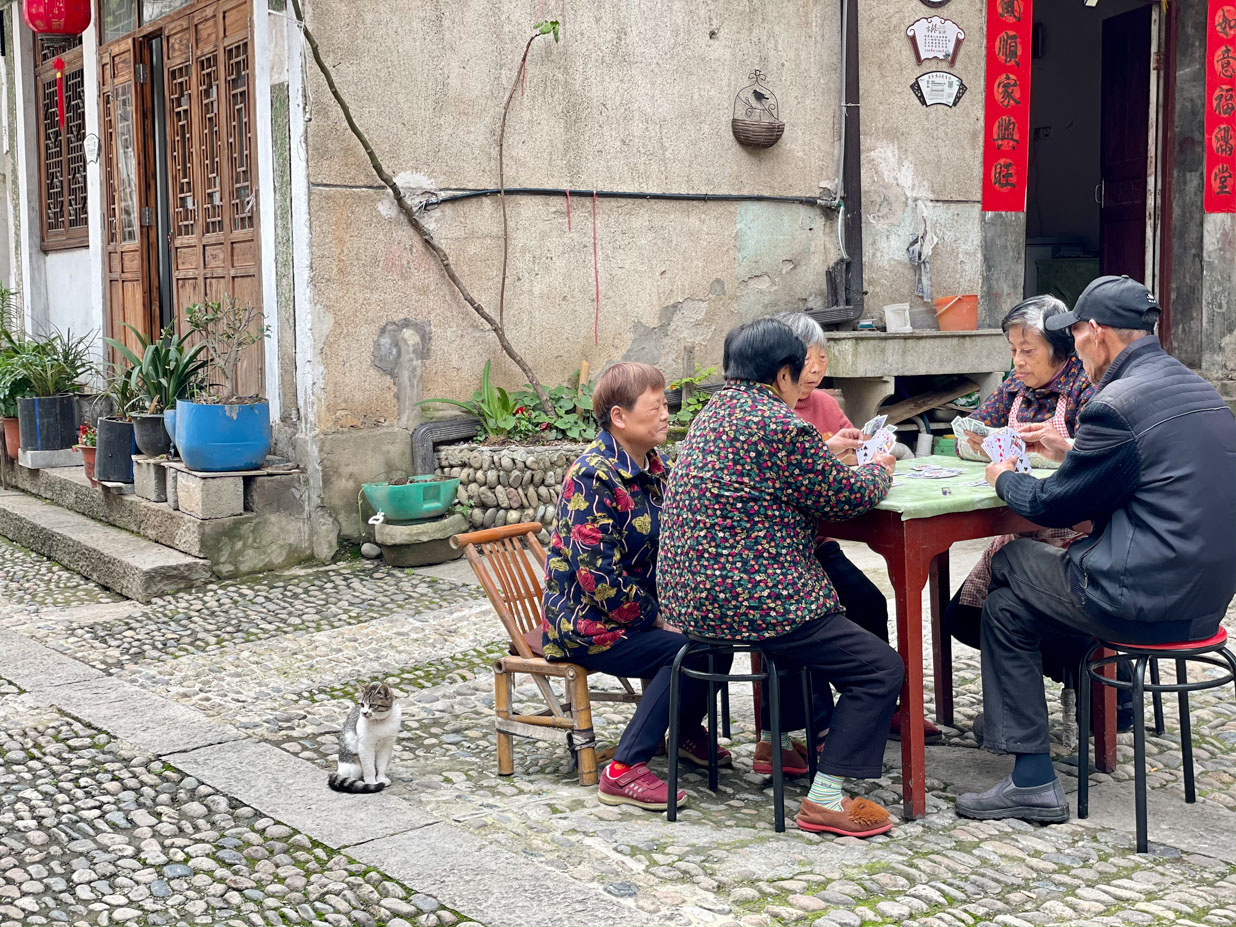 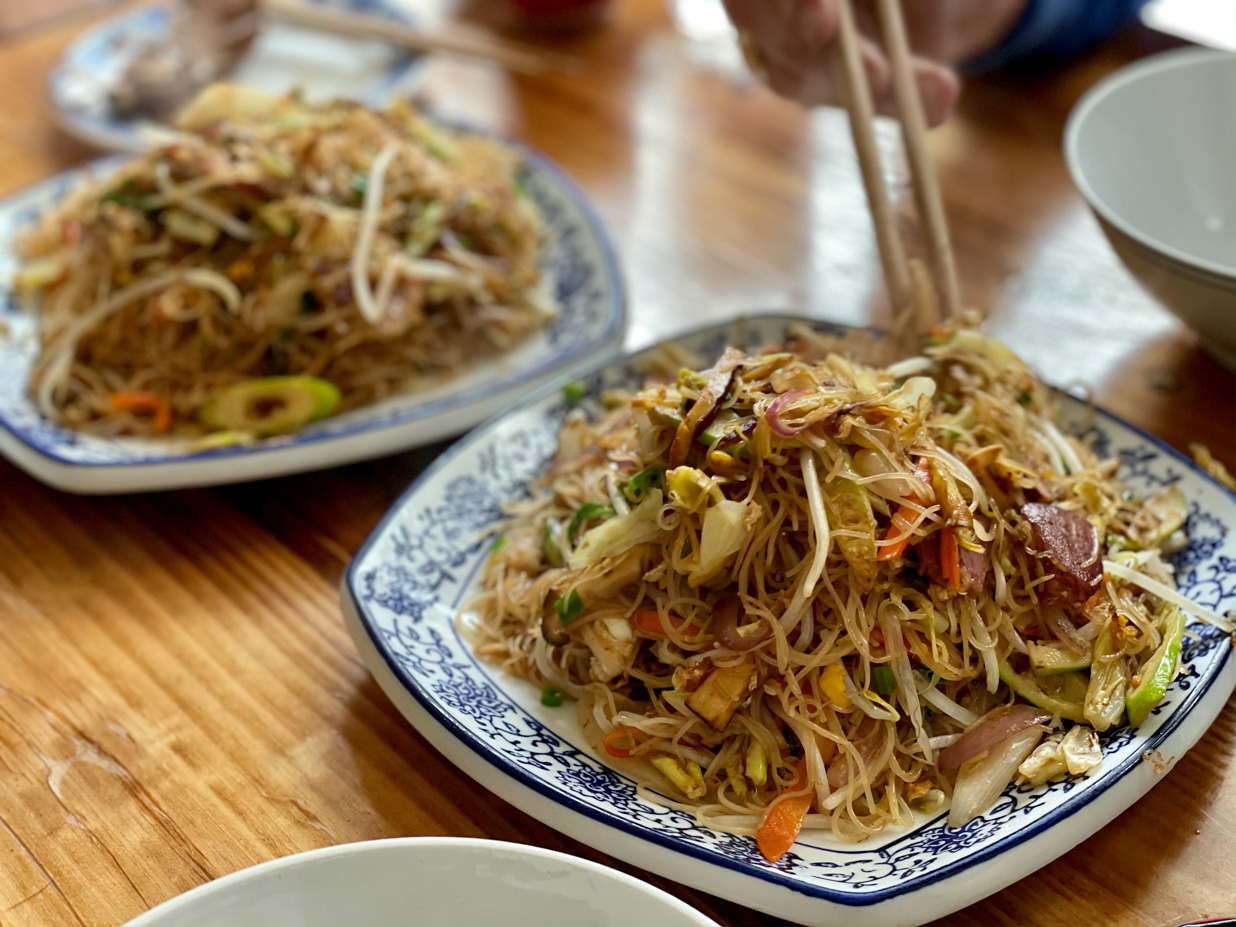 According to Lea, mifen is a specialty of the old town. We had it with homemade chili sauce for 12rmb a plate. It was excellent. 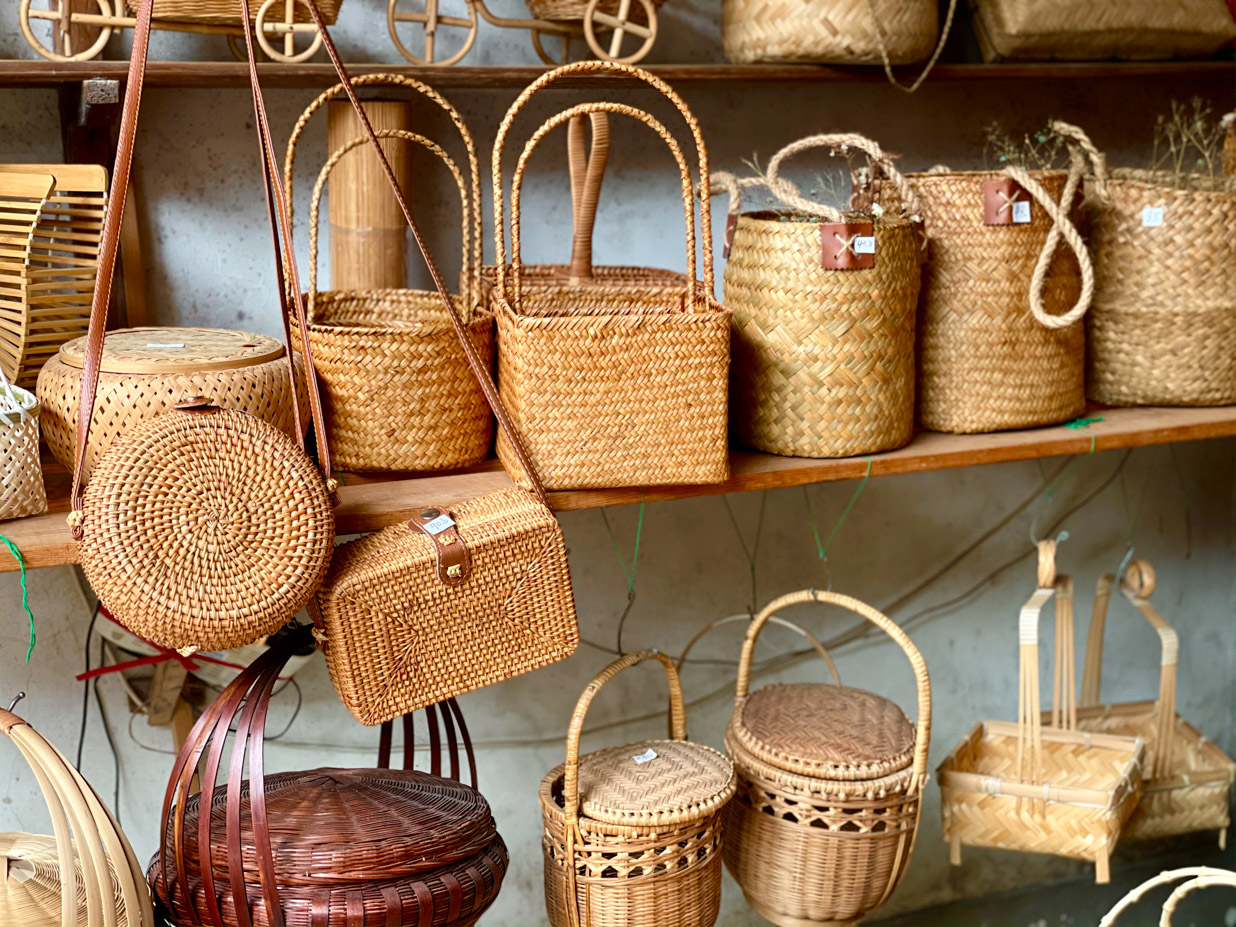 Some residents also sell artisanal handicrafts like wood-carved bathtubs and woven baskets. The baskets shown here are priced between 60-90rmb.

Rooms at Fais Un Voeu range from 780rmb to 1380rmb per night. Most of them accommodate two people, though some are suitable for three to four. To avoid waste they don’t stock any one-time use items such as slippers, shower caps, toothbrushes or toothpaste, so guests should bring their own. 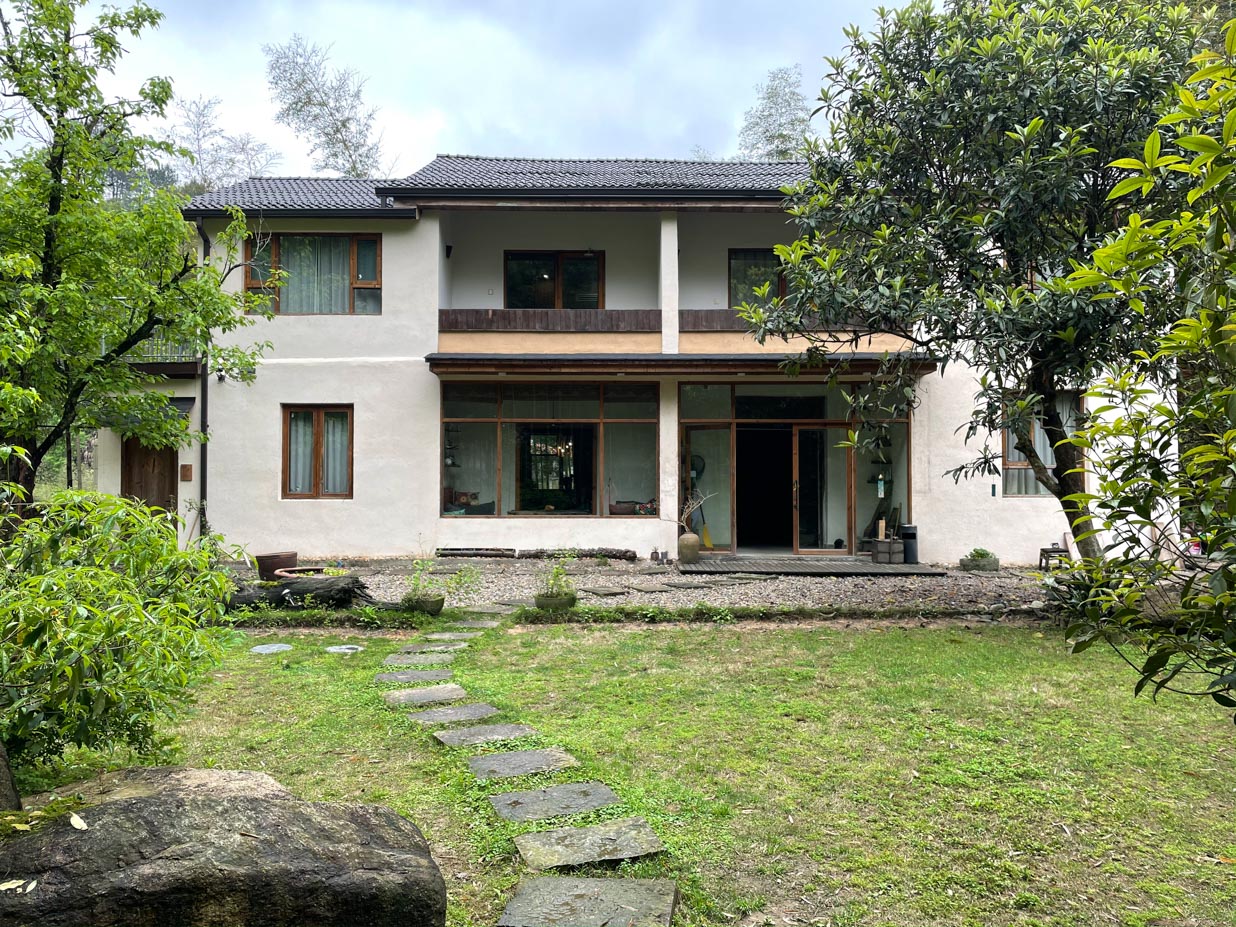 Main guest lodge from the front.

This is more of a personalized guesthouse experience than it is a resort, so if it’s a pampering holiday that you’re after, it’s best to look elsewhere. You would need to have a role in making the most out of it – talking to the hosts to plan out what you’d like to do, chatting with the other guests, or going out to explore on your own.

As for food, breakfast for two is included. It usually involves a simple spread of French bread or croissants with butter and jam served with coffee, tea and juice, and other items. Any additional breakfast sets are 38rmb per person. 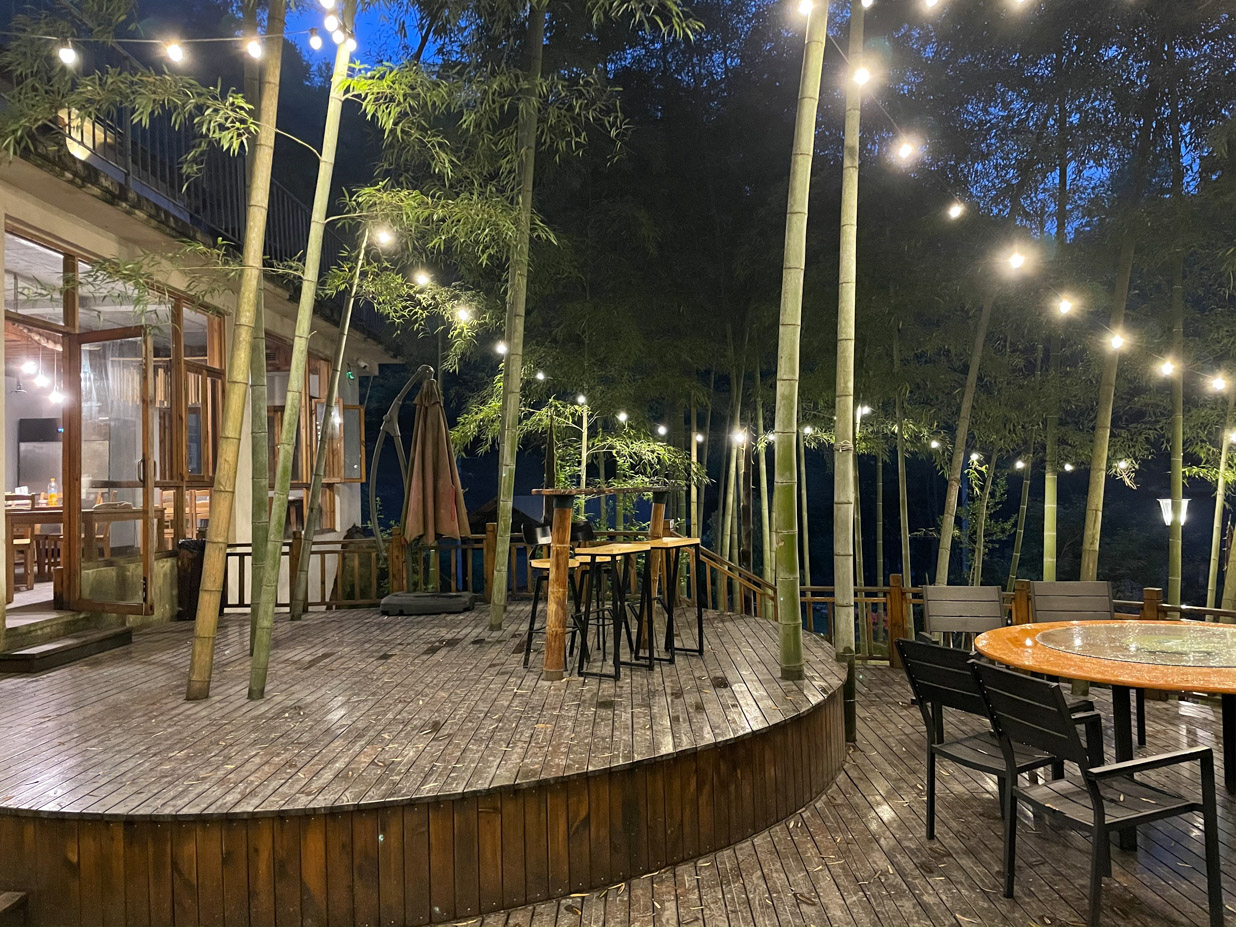 For lunch and dinner, they can arrange to have an ayi come and prepare homemade meals for 100rmb per adult and 50rmb per child. Fresh bamboo is used in many dishes. That’s because bamboo grows everywhere here. If left to grow to maturation, bamboo groves aggressively take over other natural vegetation of the area and threaten its natural biodiversity. 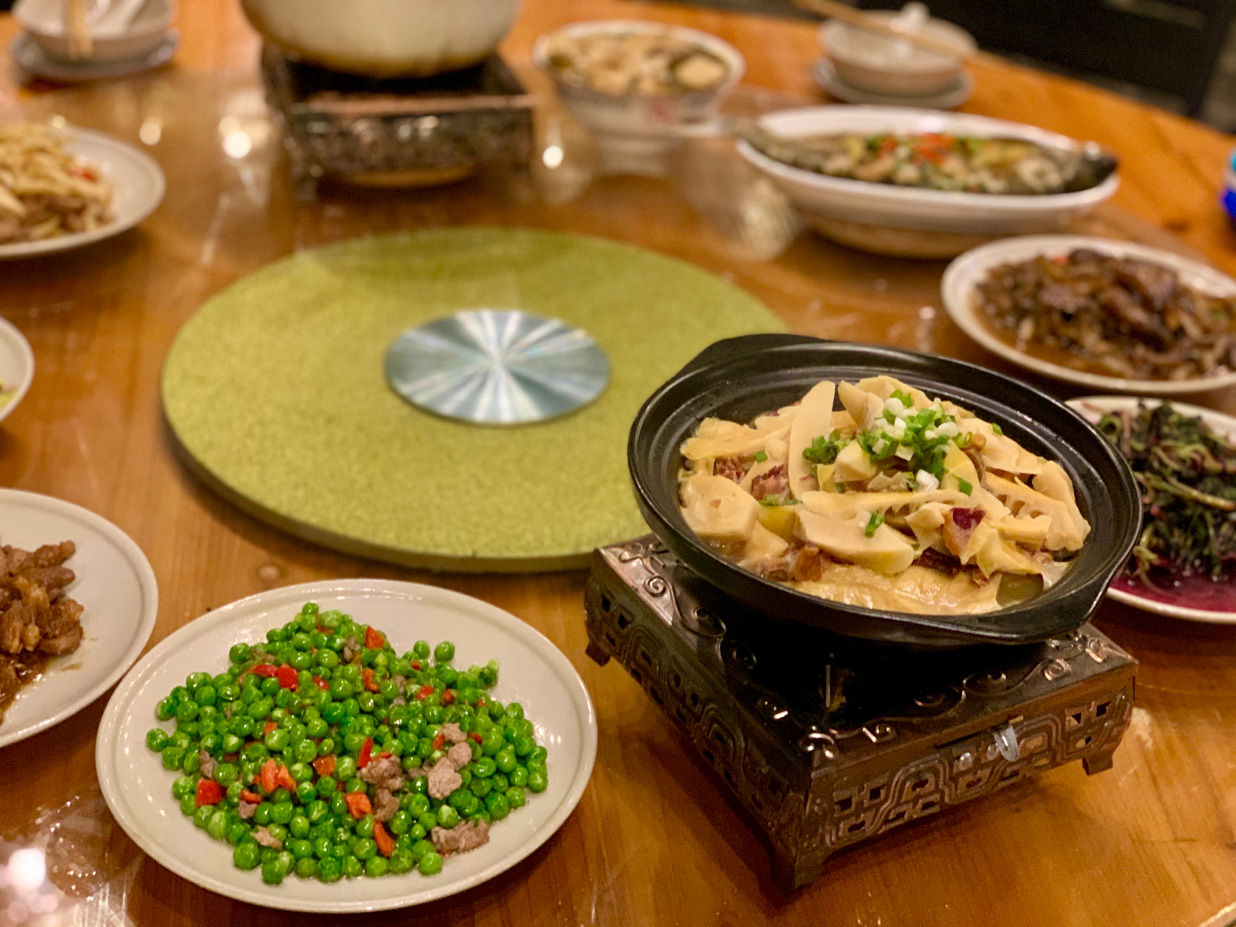 Traditional Lin’an food is rooted in Hangzhou cuisine, with some added influence from its Anhui neighbors and an even greater emphasis on incorporating wild-caught or foraged ingredients.

So like their own backyard Baobabs, Louis and Lea frequently cut the bamboo plants while they're still young, resulting in delicious dishes that see the still-tender shoots stir-fried with slices of garlic-marinated pork, simmered in homemade chicken broth or stewed with savory Jinhua ham.

They’ll also fire up the grill for those who want barbecue. The cost for that is 250rmb per person (or 125rmb per child), and it comes with Angus beef, pork, one seafood item and accompanying side dishes. Since we’ve circled back to the whole Le Petit Prince theme, here’s a little refresher on some of the story’s main messages for anyone who might like one:

The innate curiosity of children that compels them to explore — awesome!

Breaking free from these impositions and resetting our priorities to what matters (like people we love and pursuit of personal passions) … I … I need a tissue. And a drink. 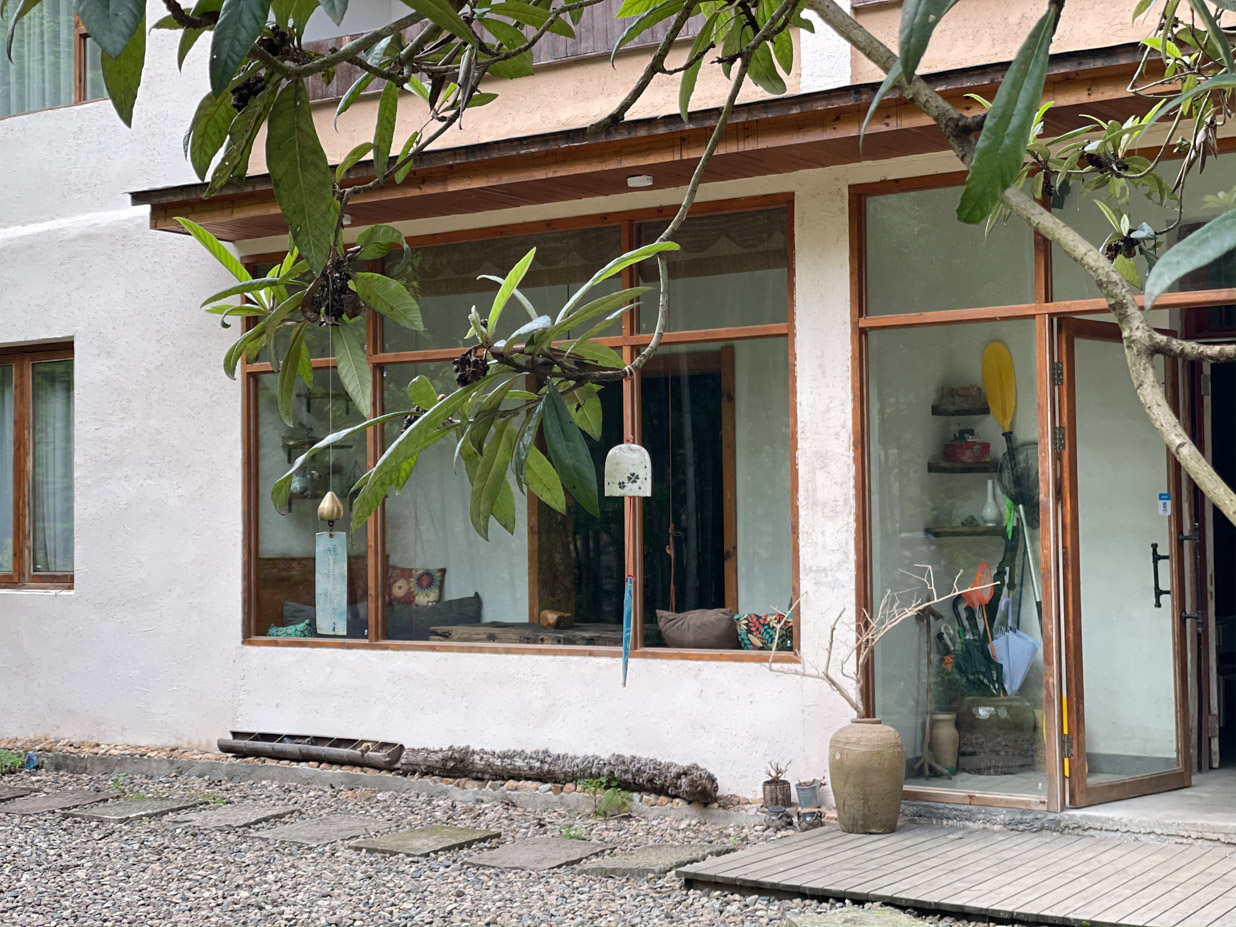 Lea and Louis ask any children who visit Fais Un Voeu to make a wish (any wish counts, except for wishing for more wishes) and take one of these bells from their “Wish Tree” out front as a memento of their visit, and of what they wished for.

To get there without a car, it's best to take the train to Qiandaohu (AKA Qiandao Lake, or further anglicized as Thousand Island Lake) railway station. It's a 2-hour ride from Shanghai Hongqiao Station, and a ticket ranges between 120rmb to 145rmb depending on the departure time.

From Qiandaohu Station, you’ll need to take a car to Fais Un Voeu. Louis and Lea can arrange for a driver to pick you up, or you can call one yourself through Didi upon arriving. That leg of the trip takes about 1.5 hours and costs between 250-300rmb one way.

The booking platform that Fais Un Voeu uses is currently only in Chinese, but the interface is pretty self-explanatory. Alternatively, SmartTicket is offering a weekday package deal that starts at 1,090rmb for two nights.