Here Are The Numbers On Shanghai's Crazy House Prices

We all know Shanghai house prices are high. But just how high? How does that compare to other expensive cities, like New York and San Francisco? And how do people afford those prices when salaries are relatively low? Thirsty for answers, I set out to answer these questions by digging for data, using some simple math and doing a bit of analysis.

My first stop was Anjuke, a Chinese housing agency with a research arm and public stats. I needed some baseline data, so I scooped up the average sales price for each district in Shanghai. In China, housing prices are given per square meter. Here they are as of August 2019 for new properties. 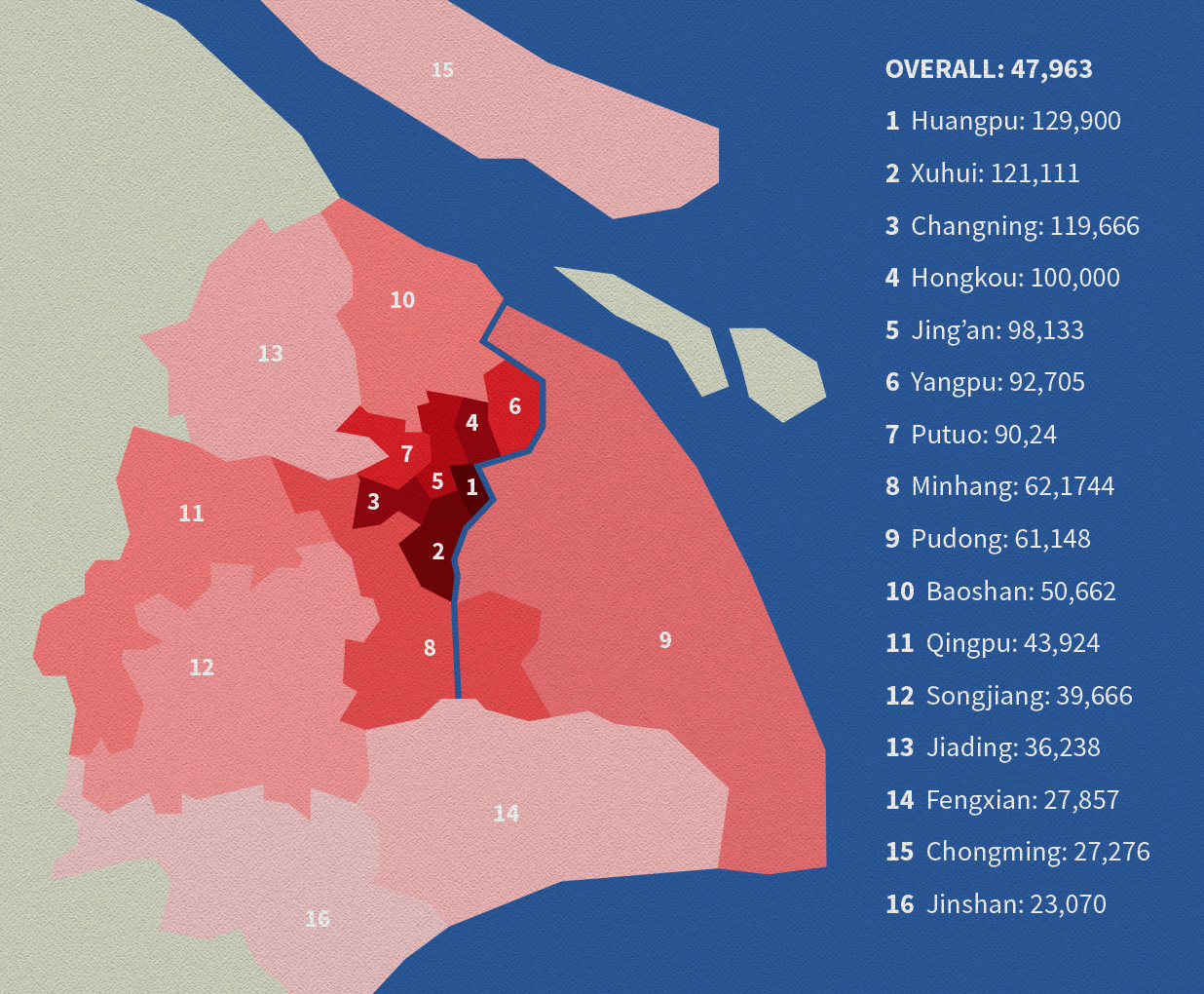 The price-to-rent ratio compares how much a house costs to buy versus how much it costs to rent.

I ran the numbers for Shanghai overall and for Jing’an specifically, based on information I got from this Anjuke page which tracks average rents. I set the parameters to a two-bedroom apartment and then calculated the average house price for a 100 square meter apartment, which is about average for a two-bedroom.

Here are the numbers:

Another way to look at the final number (81 and 109) is as how many years it would take to pay off the mortgage (assuming the average rent), before interest. That means if the landlord was relying on rent alone, it would take 81-109 years to pay off the property, depending on what district it was in.

Just for fun, I plugged the price for the Jing’an apartment into a mortgage calculator. I set it to 30-year terms and an interest rate of 5%, which is about average for first-home buyers in Shanghai these days. Down-payment at 30%, which is the law. That would result in a monthly payment of 37,159rmb. Renting that apartment for just 15,000rmb is starting to look much better all of a sudden, huh?

But Your Numbers Aren’t Realistic

This is a fair argument. A 100 square meter apartment in Jing’an will go for a lot more than 7,484rmb a month. Let’s double that and call it 15,000rmb. How do the numbers work out then? The price-to-rent ratio would be 54.52 — still higher than any city in the US. Or London (33.87). And in fact property agency CBRE ranked Shanghai as the third most expensive housing market in the world in its Global Living 2019 report, after Hong Kong and Singapore, noting that house prices grew by 11.2% in the previous year. One year. 11%.

How Can People Afford This When Salaries Aren’t At San Francisco Levels?

This is starting to tread on sensitive ground usually reserved for sociologists and government think tanks, but it’s no secret. In fact, it’s why local governments have been involved in building massive amounts of affordable housing (this is a loaded term) in the past decade. House prices are a social issue.

But just to compare. For this, I used Numbeo, which gave me a nifty chart comparing London and Shanghai.

The key to look at here is the Price to Income Ratio. What this shows is that the average house would take the average worker 41 years to pay off in Shanghai versus 21 years in London.

But there’s a catch. Most economists and analysts in China agree that the price to income ratio is not useful in China, because incomes are often underestimated and families all pitch in to help cover the cost of homes for the child or children.

Instead, what do they suggest to look at instead? The price to rent ratio. And we’ve already covered that.

Check Your Own Apartment Building's Sale Price and Price Ratio

Want to play along at home and see what the price to rent ratio of your apartment is? You'll need a little Chinese but go here, and enter your address or building's name into the search bar. Click the red button and it will take you to a page showing all of the apartments publicly listed for sale in your neighborhood and their asking prices. Then, using the formula above, plug your rent in, pick an asking price and plug that in, and you've got your own personal formula for just how overpriced your apartment may or may not be.

What's This All Mean?

House prices in Shanghai are more expensive than just about anywhere in the world in absolute terms, outside of Hong Kong and Singapore, and that's not even taking into account that the average worker in Shanghai does not make an equivalent salary to someone in her position in New York, San Francisco or London.

People are snapping up houses in Shanghai left and right, despite the high entry cost. Why?

There are a number of reasons, from people who are originally from other cities buying to help them get a Shanghai hukou, to investors who are not worried about mismatched rental prices. Why not? Because house prices are rising so fast that they will probably just sell in a few years and reap the profit. (In industry speak, capital appreciation is so fast that they are not worried about low rental yields.) In their case, property is an investment first, and a home second.

Without getting too deep, investment options in China are more limited than they are in some other countries, and so money naturally flows into housing. There's a lot more at play than just buying yourself a home to live in.

Meanwhile, average house prices in Suzhou are still under 20,000rmb per square meter and it’s just 30 minutes away on the high-speed rail. Time to move to Garden City!

(Or look for a better deal in Shanghai! See our full Housing listings here.)

TAGS
(Service Tag) From Our Archives Articles - Best Of (Featured)