These Companies are Turning Buildings into Co-Living Apartments

Co-living is the next big buzzword in the residential real estate market in Shanghai. It’s full of promise, it’s going to change how we interact with our neighbors and it’s going to happen soon. In fact, it’s already here.

After more than a week of diving into the world of co-living, we have a preliminary answer: it’s too soon to say exactly. Big real estate companies and smaller landlords are in the process of defining what co-living means, how it differs from situations like dormitories and who it’s meant for.

It’s a new thing. It could be really cool. It could also be less than really cool. You can move in tomorrow at a few properties in Shanghai and decide for yourself.

We’ve been to several properties this month, from the high-end and well-defined, which we’ll talk about, to some truly depressing setups in dingy buildings that don’t even deserve to be called hostels, which we’ll skip.

It’s kind of an exciting time, if you’re in the real estate and housing market — and everyone who rents an apartment in Shanghai is.

Why Is This Happening Now?

The government has made a push in the last few years to create more rental housing. Rental units serve young professionals who are moving to the big cities but can’t afford the high price of home ownership, according to real estate firm JLL. The government wants these smart people to move to cities but is concerned there might not be enough affordable rental housing for them in the traditional market — first landlords, second landlords — so the people in charge are pushing for more.

In policy terms, this began around 2016 with a new type of real estate designation that allows State Owned Enterprises to own and operate whole buildings for rental housing called purpose-built rentals. Other changes include financial incentives, requirements for purpose-built rentals on large development projects, and making it easier to rezone commercial property as residential.

That, in turn, has attracted all kinds of companies into the rental market from international, established real estate companies like Capitaland (via Lyf by Ascott) to heavily invested startup companies like Cohost (two properties now but 20 more planned because of “infinite demand”, CEO Todd Gill told us) and then a raft of smaller landlords just chancing it.

The Brands and What They Are Like: Cohost, Ascott, MINI Living

Some brands have a better defined take on what co-living is than others, with common themes being to promote socializing among residents, to attract young professionals and to cater to short-term renters.

They offer a place where you could live with friends, socialize in common areas, and invite people over for a party — a pipe dream for most young urban dwellers in Shanghai where it’s common to live with parents or share a six-person apartment with strangers. 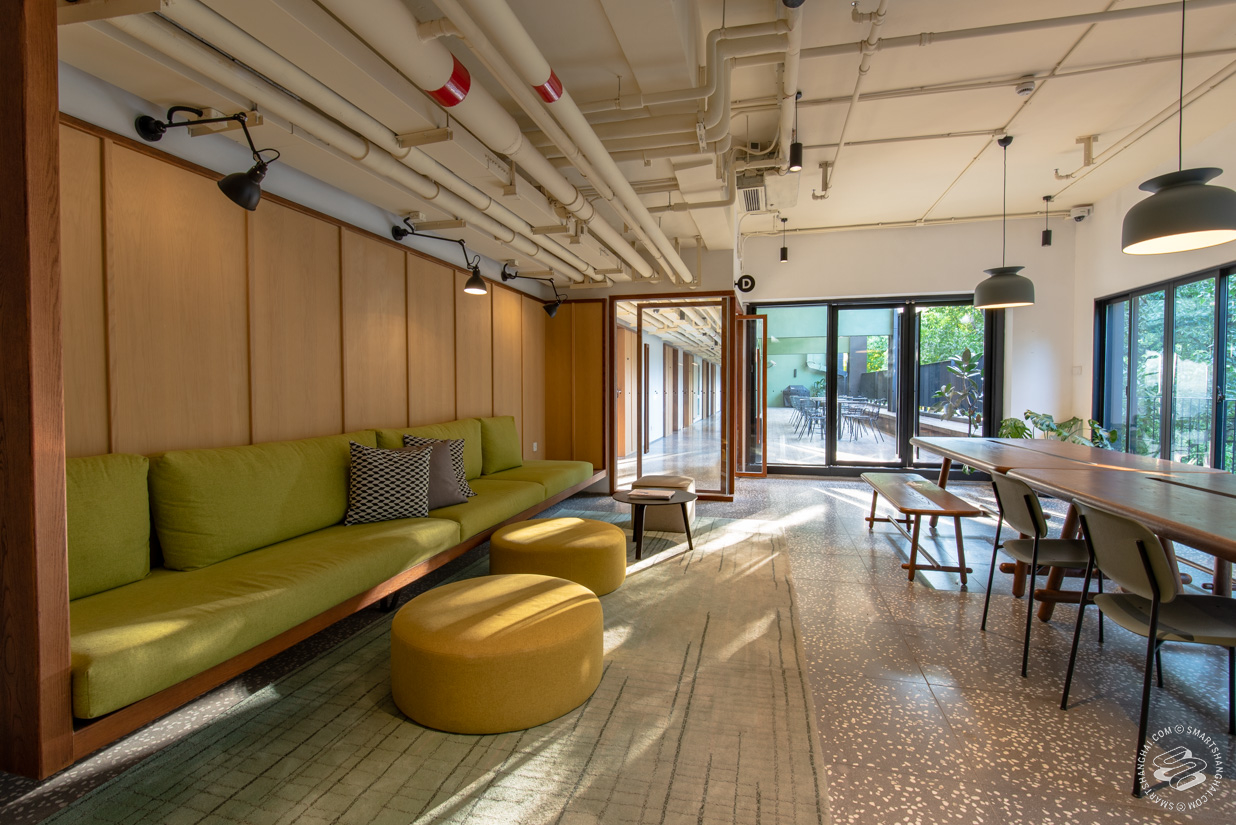 Cohost West Bund is Insta-ready. The shared laundry room is millennial pink and there is free coffee (and Goose Island beers in the fridge for sale), and it feels like a very well-kept hostel/hotel, with its open kitchen, dining, recreation room, pool, gym, weekly cleaning service and front desk staff there to help with SIM cards and tourist recommendations and the like.

Cohost’s goal is community, achieved through weekly events typically with multinational brand partners. CEO Todd Gill told us he sees a need for more affordable, ready to move in, short-term housing for traveling businesspeople, as well as social focused, high-quality rentals in a city where house parties are not very welcomed by neighbors. 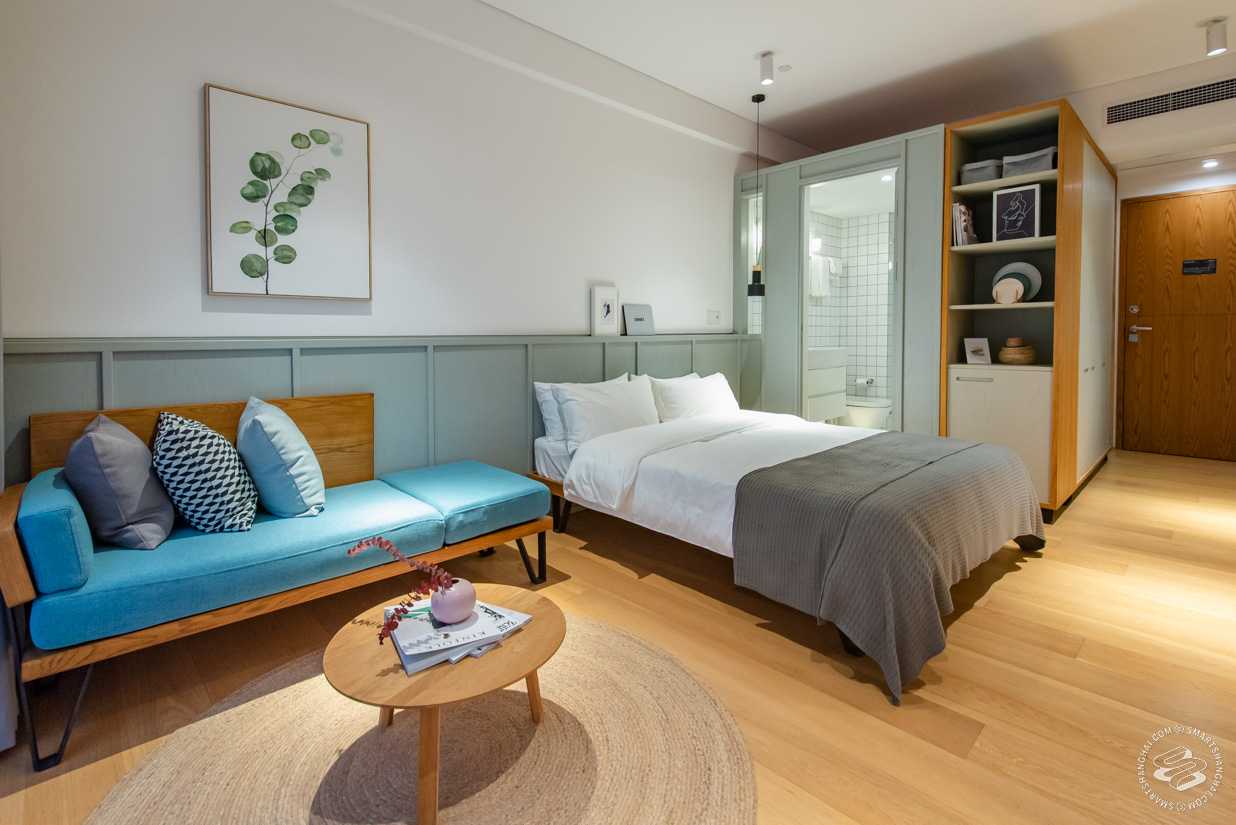 Interestingly, while Gill says the usual renter is a creative young professional (aren’t we all!) making 15-30k a month, residents have ranged from a family of four to 80-year-old grandmas. Seventy percent of the residents are long-term renters. Singapore’s Ascott is a major player in the serviced apartment market, which caters to businesspeople, short-term renters who want something homier and less expensive than a traditional hotel, people who don’t wanna deal with individual landlords, and people who don’t need to have residence in a certain district or neighborhood in order to get their kids into school (this is mostly for parents of kids in international schools). The traveling businessman was up until recently a large market in Shanghai, with serviced apartments like Ascott filling their need for shorter, flexible rental contracts, and a kitchen making it homier than a hotel.

There are nine Ascott group properties in Shanghai, including two Ascott Residences one on Huaihai Lu (the building where Highline is) and one on Hengshan Lu, tucked behind the church.

But even Ascott sees the potential in co-living and plans to launch its Lyf brand in Shanghai in the next few years. Launched in 2019, and “run by millenials, for millenials”, the brand already plans to roll out five properties in China: Shanghai’s Zhangjiang, Midtown Hangzhou and Xi’an Dayanta in 2021; Hongqiao in 2022; and Beijing in 2024.

In Singapore, communal areas include a co-working zone that can be used for workshops or events, a laundromat with foosball, a social kitchen, and a gym with a human-sized hamster wheel. Shared kitchen and living area at MINI. Photo by MINI.

MINI Living is the first venture into real estate from the designers of the MINI Cooper car, in collaboration with Nova, a real estate company that operates the Base brand of traditional office space and residential serviced apartments. Shanghai was chosen as the first city for MINI Living in the world. The project has been teased since 2017, but the five-building former paint factory in Jing’an proved difficult to salvage, and construction and business delays have yet to produce a finished project.

Their goal is making space for social interaction. “You don’t live in the room, you live in the whole building,” Bart Kuijpers, project manager for design and development, told us.

The design of the complex is meant to make traditional barriers i.e. doors, more porous with rotating walls that open up a space, windows into your neighbors’ room that can lifted and closed on two sides, and windows out to the halls. The next-level openness is shared kitchen and living rooms, then semi-public shared rooftops, a café, co-working, office space and a bar run by Flask, plus retail shops in the first-floor courtyard including the planned second location of Egg. The design is meant to gradually shift from public to private. One-bedroom at MINI. Photo by MINI.

The apartments themselves are 15sqm to 25 sqm pods (though bigger ones up to 55sqm will be available), with a kitchen and living room shared among 12 people (bathrooms are private).

Kuijpers sees high-rise apartments as lonely and MINI aims to maximize human interaction. In the sharing spirit, there will be MINI Cooper share cars, for those with Chinese driver’s licenses. The 1515 International Student Apartments serves the Tongji and Fudan University communities. Each room has its own bathroom, with shared kitchen, laundry and outdoor patio space. The apartments are more appealing than a typical Chinese on-campus dorm for those who don’t want to share bedrooms and bathrooms and want more privacy. The 24/7 front desk service speaks English and can help with basic Chinese services like setting up WeChat Pay, police registration and receiving deliveries. The management doesn’t consider its student apartments to be co-living, even if there is a lot of opportunity for socializing in the communal patio and kitchen. The appeal of private rooms and bathrooms is the draw away from campus housing. If the main point of co-living is the easier ability to socialize, 1515 could plausibly meet the definition.