Hunting for Tomb Robbers at the Ju Qi Antique Market

Rooting around for gizmos, geegaws and grave goods.
By Songbei Zhang
2020-12-04 12:00:00
Photos: Angela Leung
"Offbeat" is a column about stuff to look at or do in Shanghai that's interesting or weird (relatively, of course), that doesn't fit anywhere else.
Hidden down the back of a flower market that also sells bazaar curios – linden necklaces, fighting crickets, clay toys to decorate a fish tank – is a three-story building with a big red sign reading "聚奇城"— the Ju Qi Antique Market. It has been at its current location for over a decade. I'm told that this is where you can find interesting, even inspiring, vintage souvenirs. 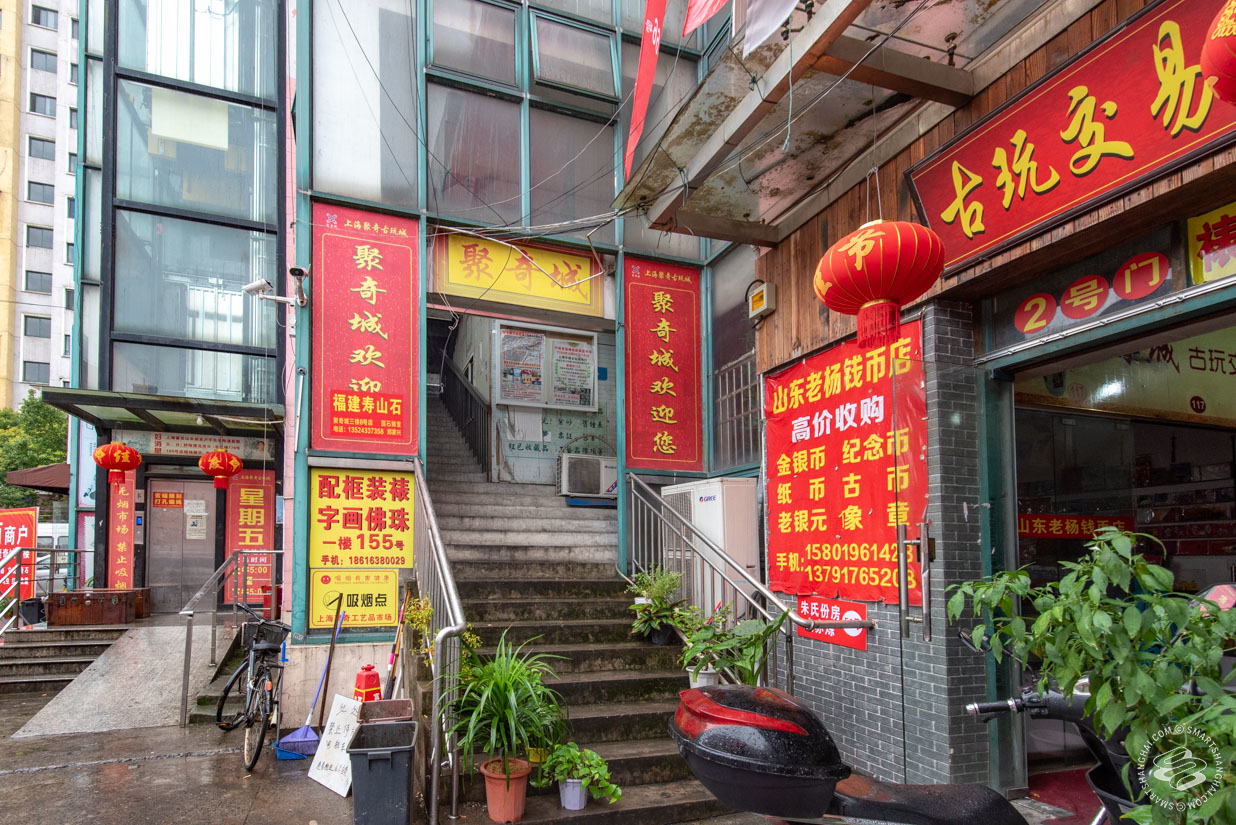 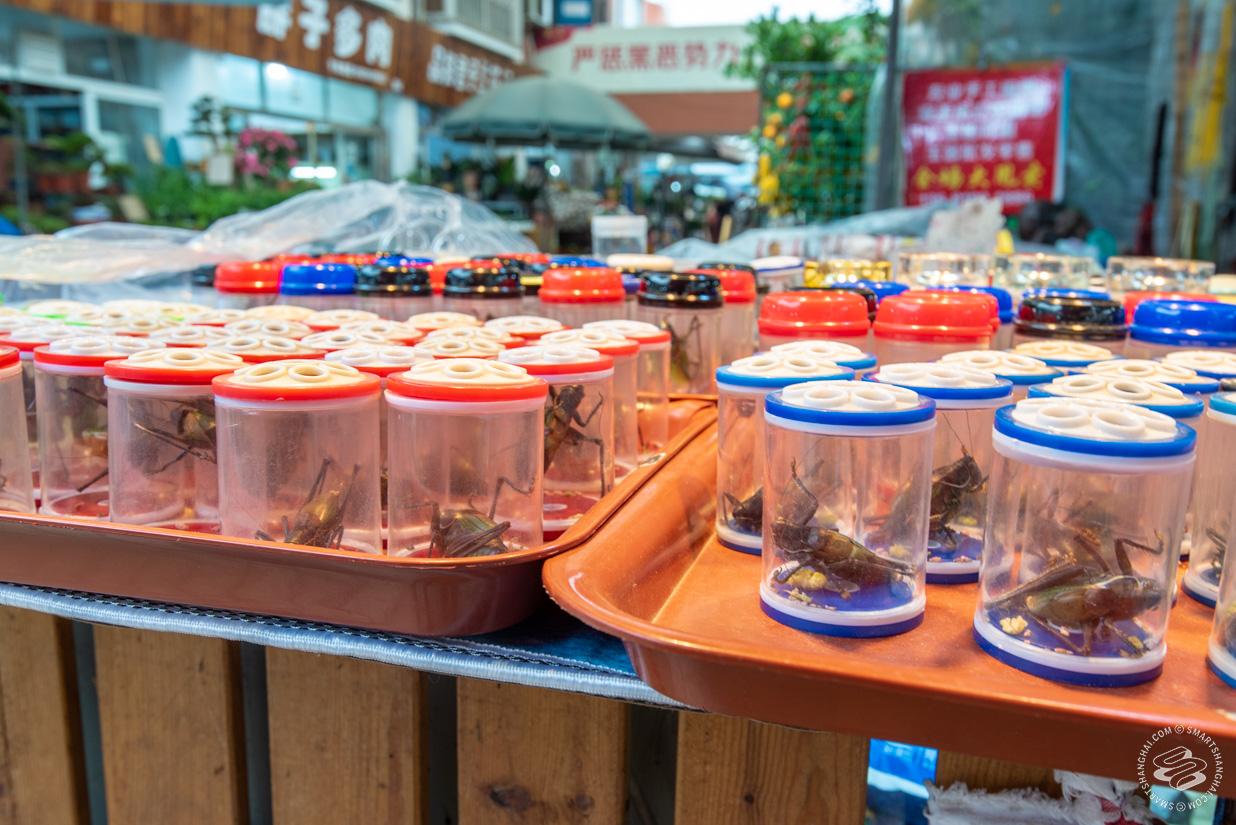 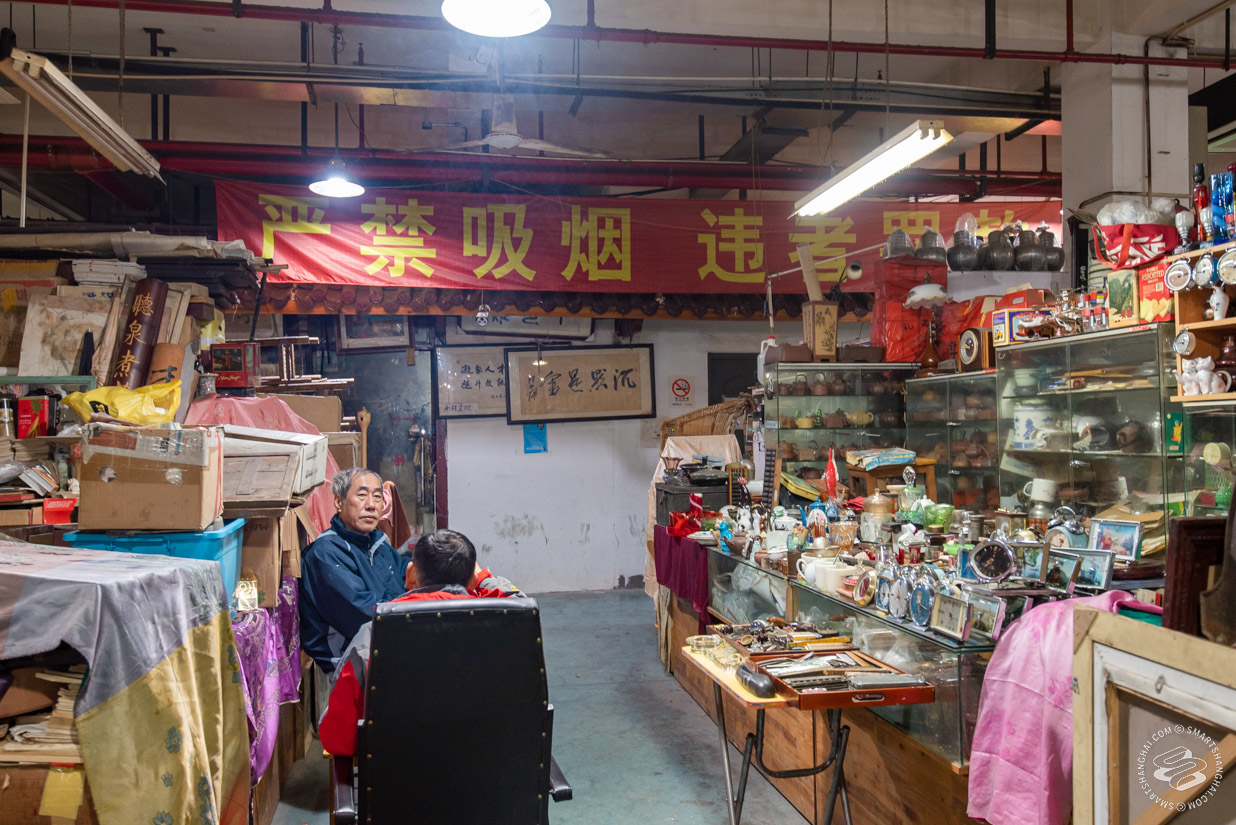 The air is damp, moldy, and stinks of old cigarettes. Dust rushes into my nostrils with every breath. The lights are dim, doing nothing to improve the shadiness of these narrow passages. Not an ideal place to be on a grey, drizzly day.

I like antique markets. This is not my first time inside an antique market that feels like a blackmarket trading zone, but Ju Qi Antique Market fills me with awe. Partly because of its size, but mainly because of the abundance of stuff sold here. Anything short of big-piece furniture that could loosely be categorized as "antique" is sold here. Most vendors sell jade, but they also sell everyday trinkets from the 80s and earlier. Sometimes way earlier. Big Mao portraits are stacked near framed Chinese paintings and calligraphy — impossible to know who painted them and when. 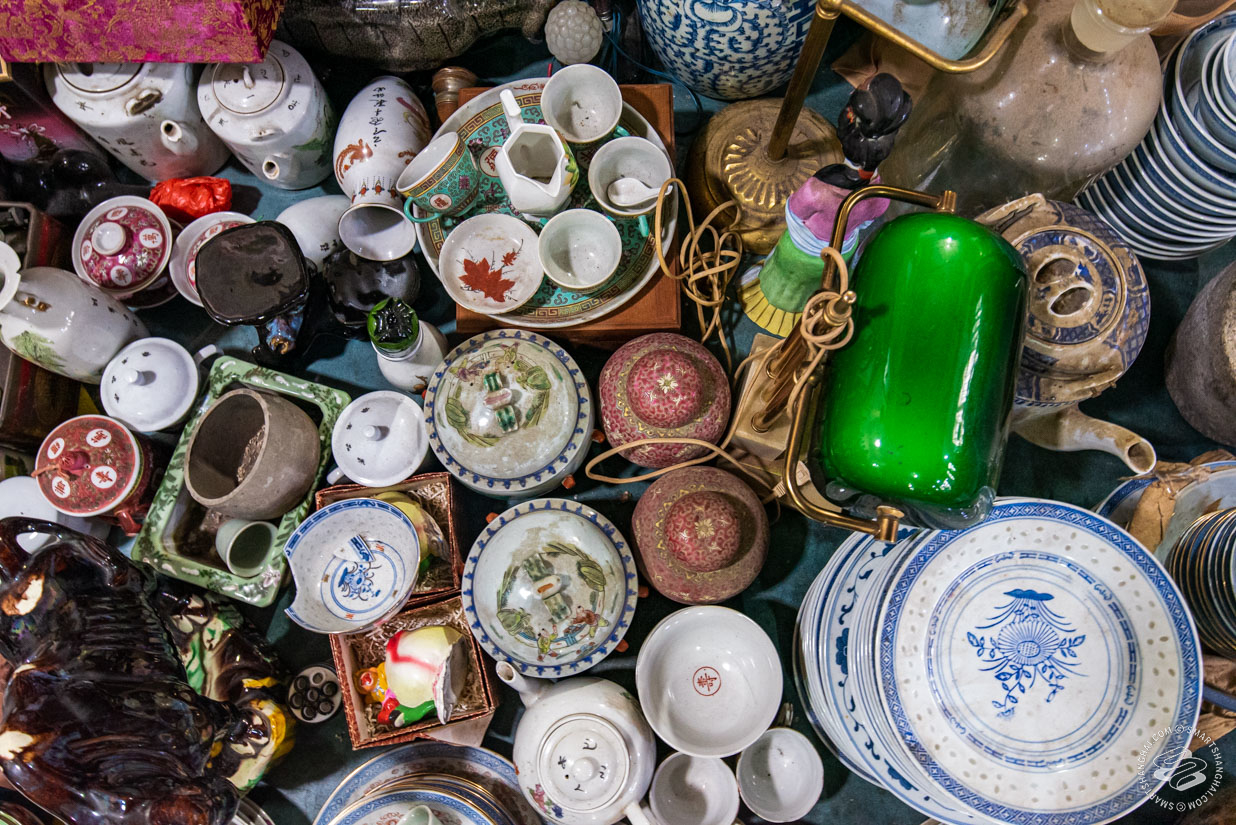 Tiny, unimpressive rocks displayed inside a grimy window are marked as "Neolithic." Inside the same window are several heavily oxidized statues that resemble Tang tri-color glazed ceramics. It's like the abandoned footlocker of history. I pick up a rough-looking ceramic bowl that resembles one I've seen at Japanese restaurants and am told by the store owner that it's from the Song Dynasty. Next to it is a magnifying lens with a grip made from antelope horn. The shop owner grins at me, amused by my raised eyebrows. 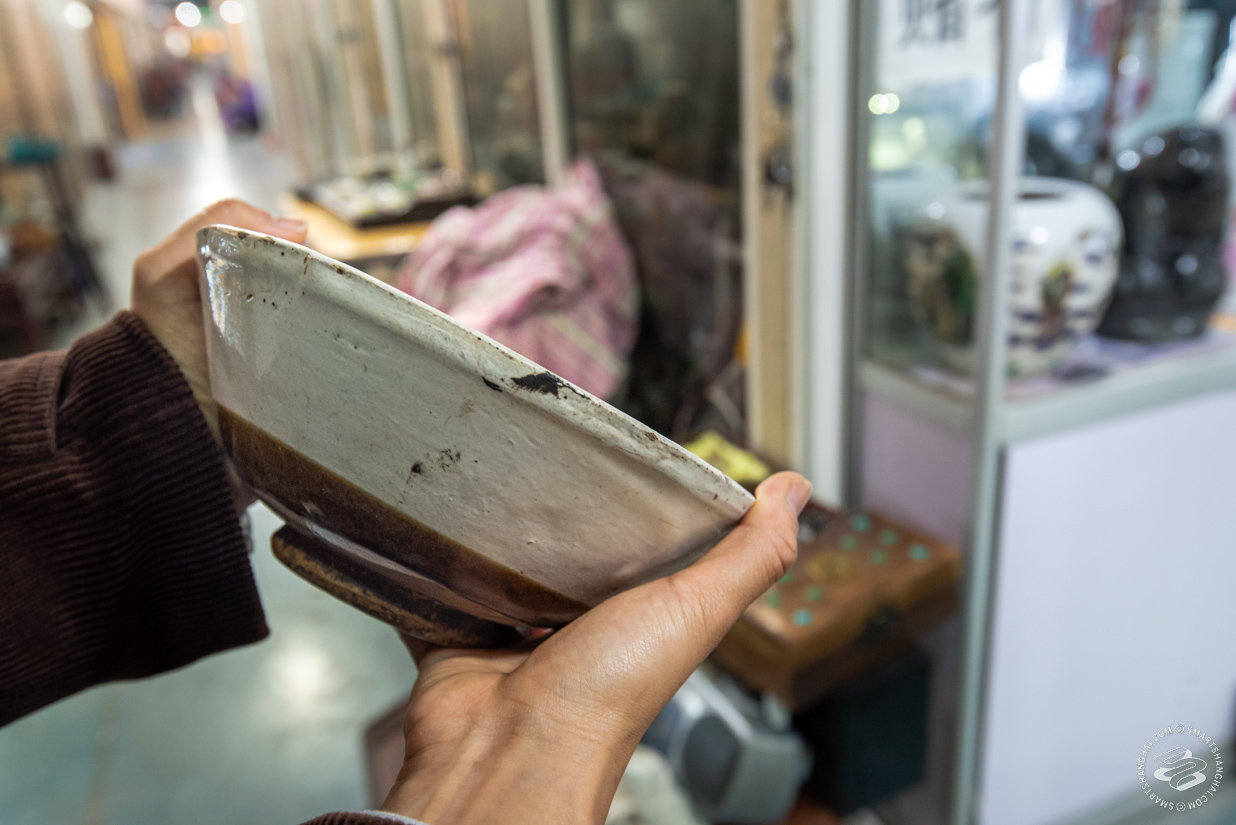 The majority of third floor storefronts are closed, or empty. There's a big space in the middle that stands vacant until the Friday flea market — highlight of the week. The entire place gets cramped, I'm told. But on a Thursday morning, vendors are the only people there. Most are garrulous, middle-aged men smoking heavily while drinking tea. 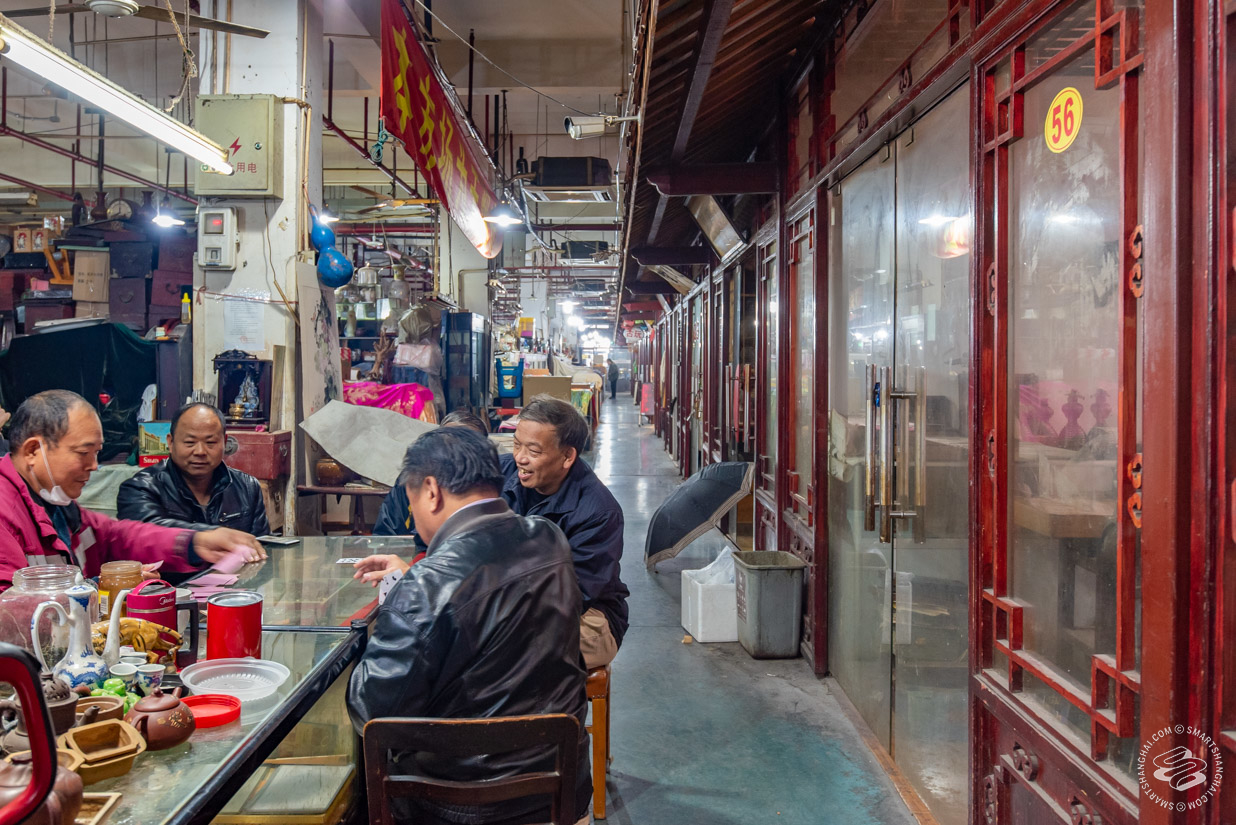 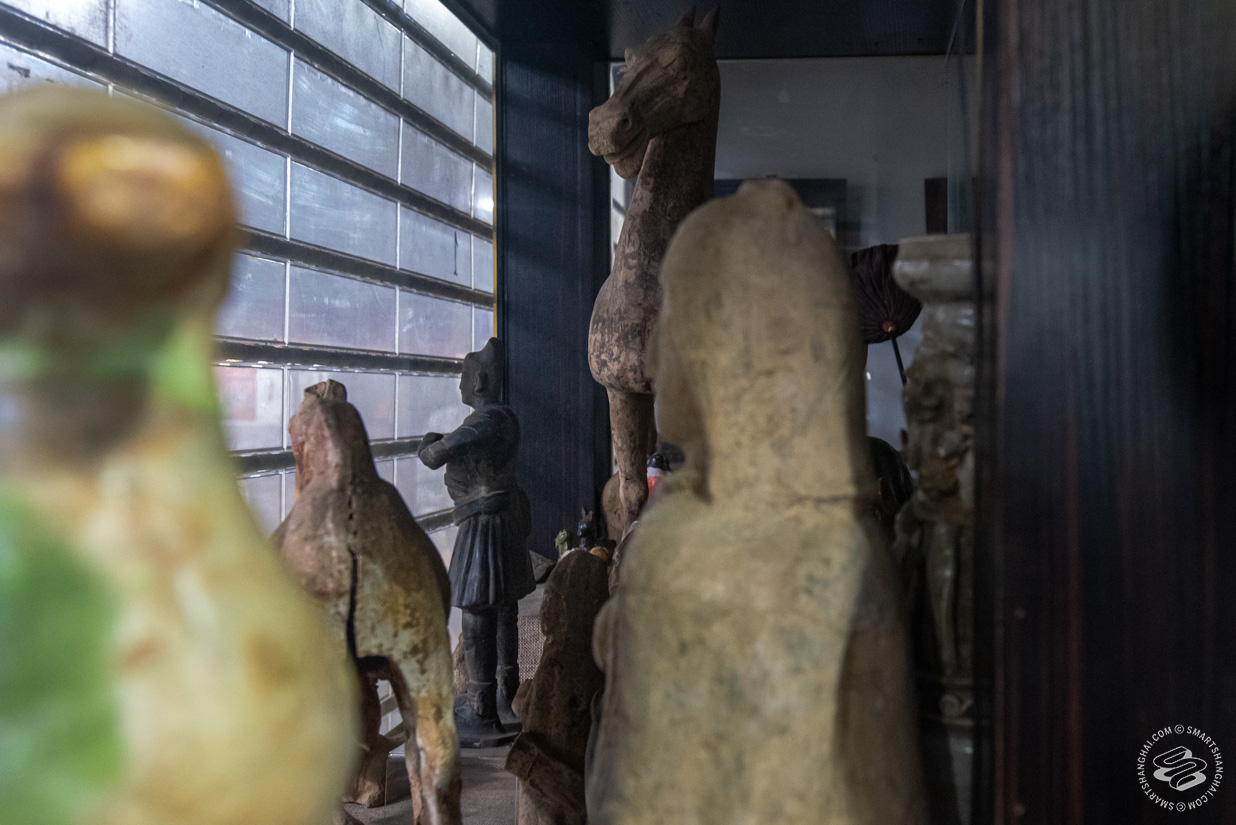 Most of their sales come from a fixed community of collectible-chasers. It’s hard to imagine that in 2020 Shanghai there’s still a place that survives off old contacts and word of mouth.

"I don’t even know how to use WeChat. How do I sell things online?" one owner from Anhui says. He has been running his jade shop for as long as this market has existed. I ask him whether the things sold here are "real" antiques. He shrugs: "I couldn't really say. Maybe not." 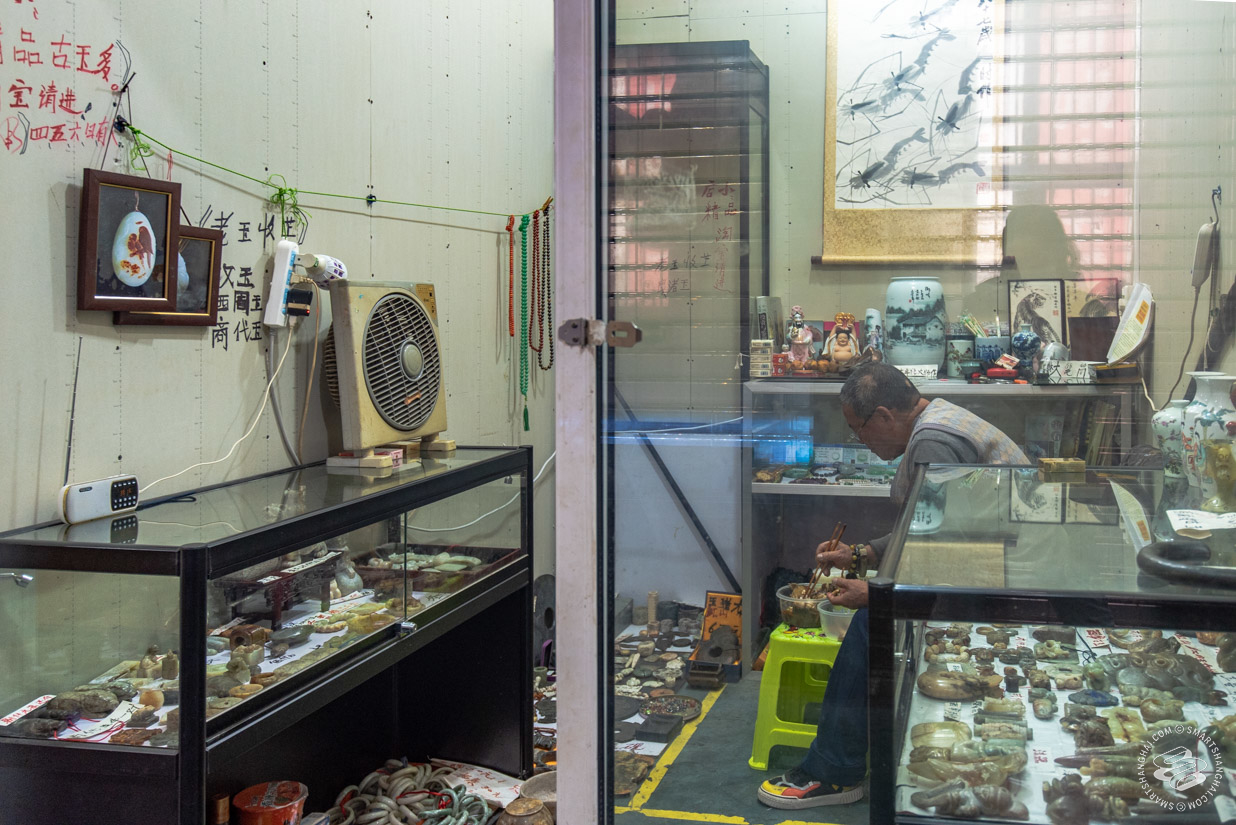 I'm told differently by another stall owner. He doesn't like me poking around. He speaks with a heavy Northern accent and an attitude: "you need to know what to look for, or you don't know if it's real." 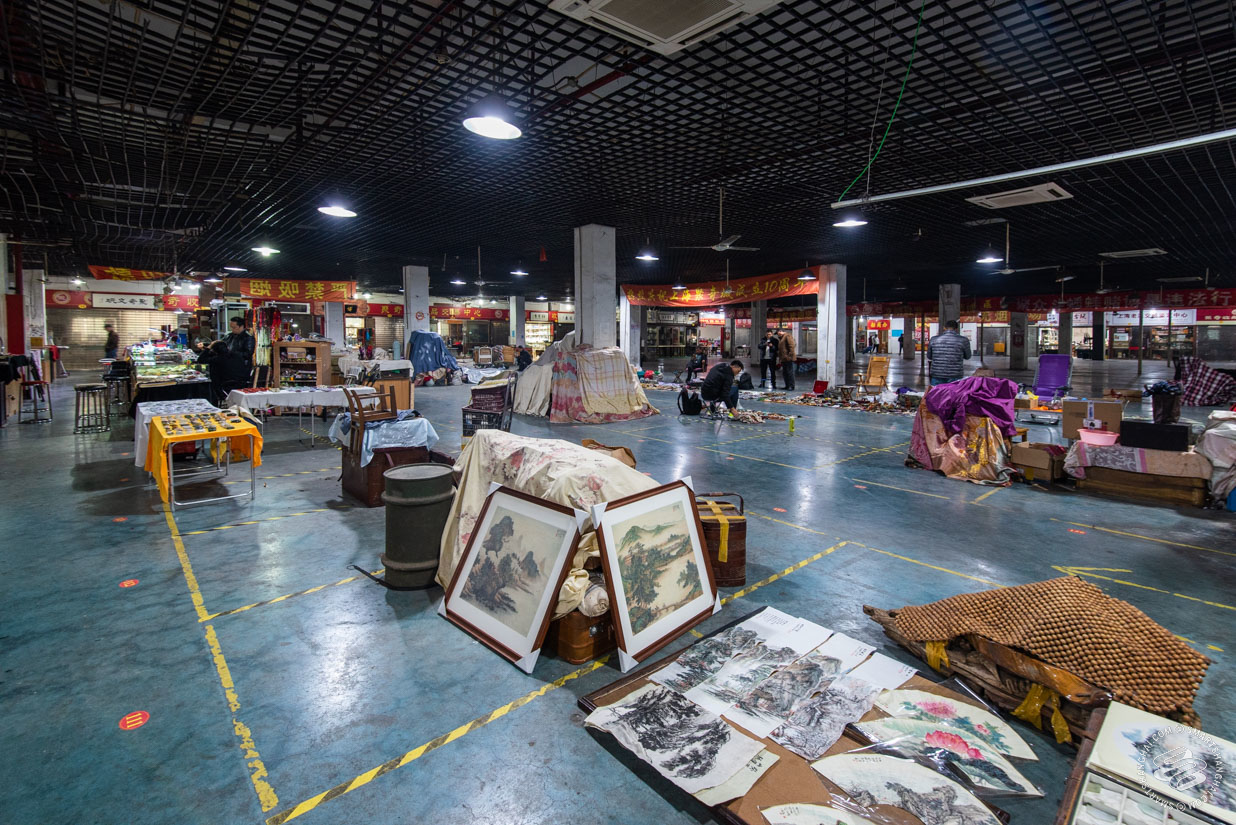 I ask him about a chubby incense burner painted black. He strikes the thing gently with his knuckle. It gives a crisp ring. "The burner is from the Qing Dynasty. It's at least 20,000 rmb. Feel free to take it to the National Museum of China and get it verified by a professional."

I wonder how many people would actually have a contact at the National Museum of China. I don't dare ask him whether it is legal to hold on to an antique which could technically be considered a "relic." But his confidence has planted a thought in me that maybe, just maybe, those dirty old statues on the third floor are, in fact, Tang Dynasty glazed ceramics. I'm reminded of a popular thriller called Tomb Robbery Journal (盗墓笔记) that was super popular a decade ago. The main characters in the story are maniacs and money-chasing adventurers who get into ancient Chinese tombs in search of rare treasures, which they sell to antique markets. Ju Qi feels like that. I can't help the thought of meeting a real tomb raider flashing through my mind as I walk down the hallways, giving me goosebumps. Not likely. But a fun thought. 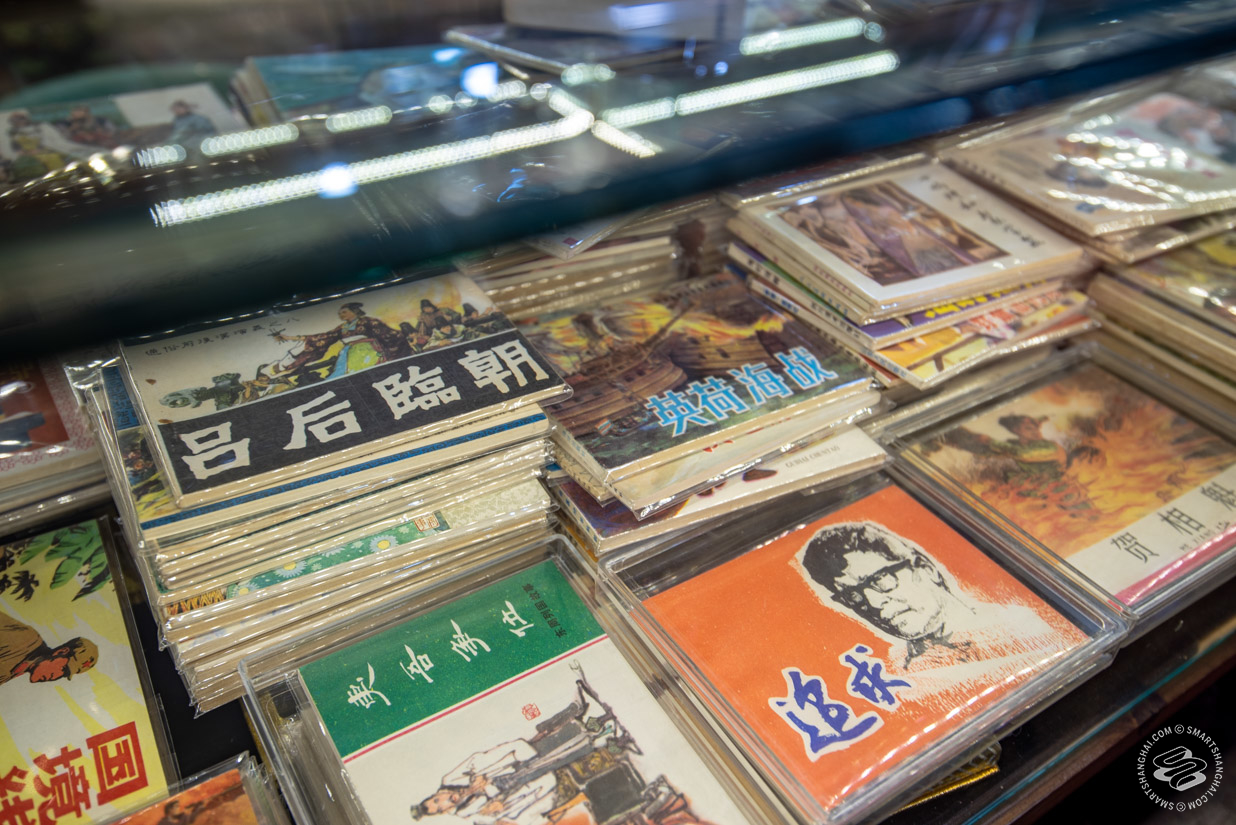 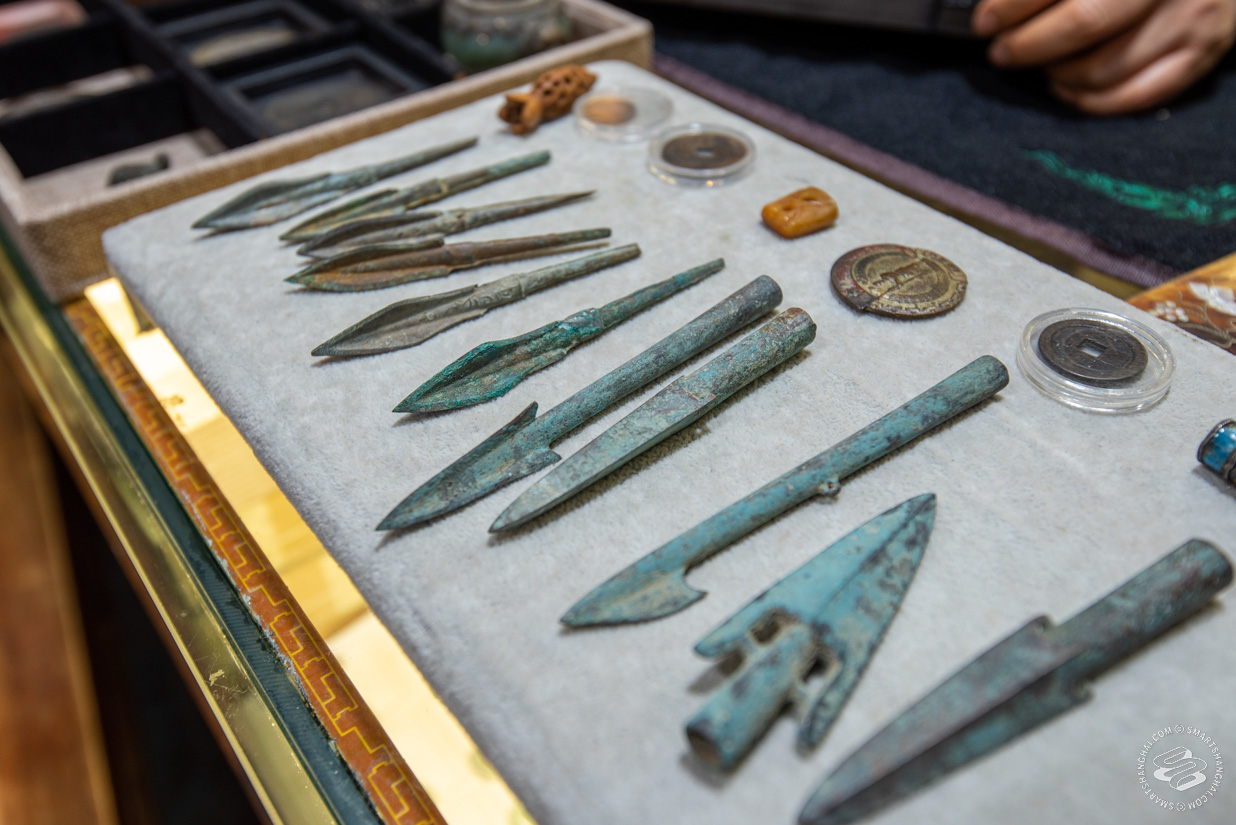 The shop keeper declines our request to take a picture of his incense burner. 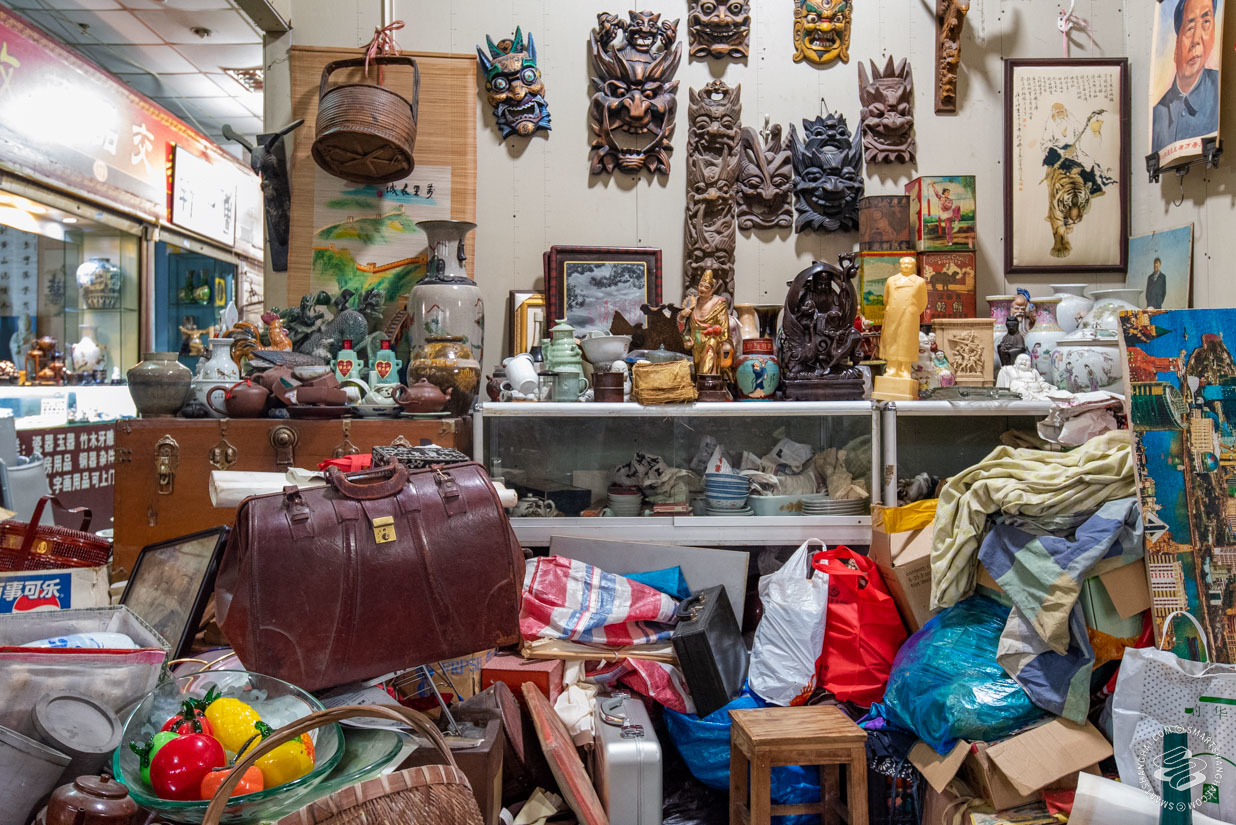 He doesn't seem to appreciate my curiosity. The market is for connoisseurs looking to spend money, not laymen seeking adventures.

I feel a little relieved to exit the market into the fresh air and daylight, but part of me can't wait to go back for the Friday flea market. 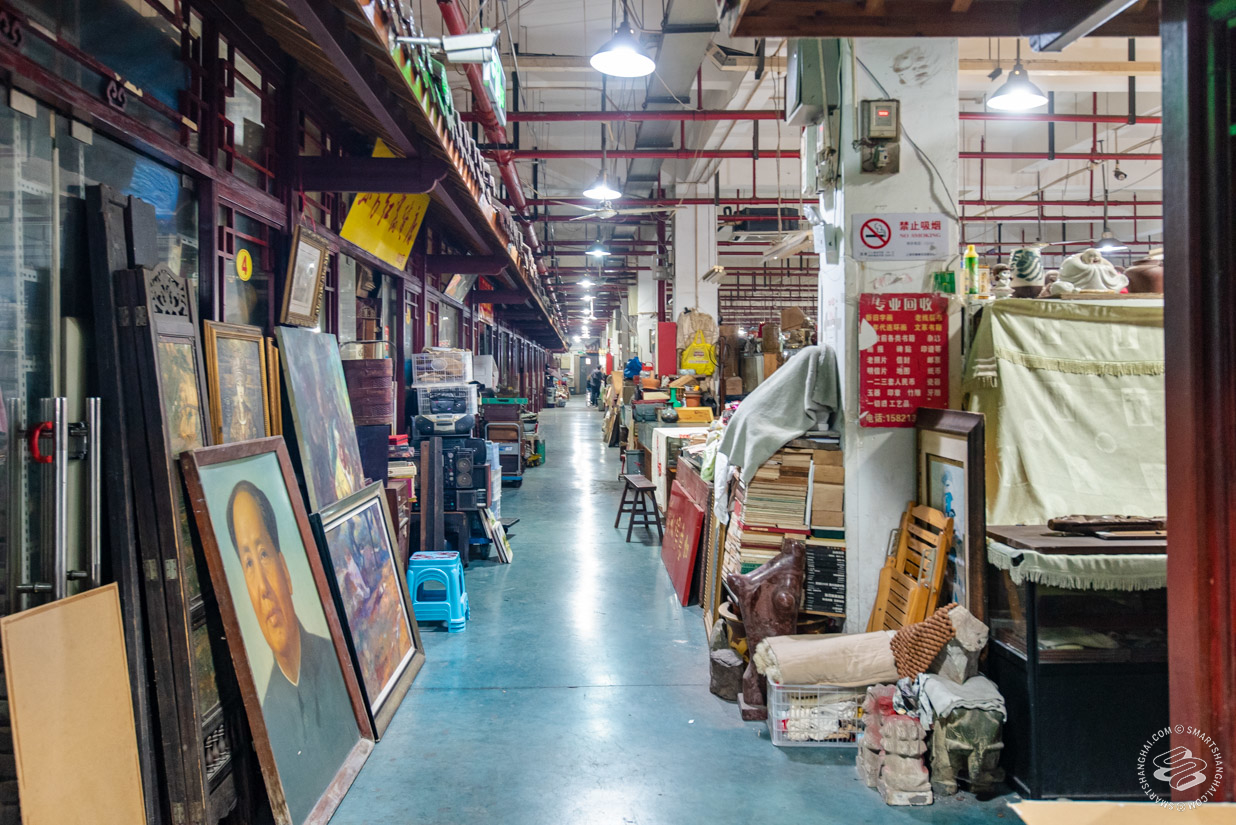