10 Places To Watch the Super Bowl in Shanghai

Beers? Check. Grub? Check. Big ass TV screens? Double-check.
By SmSh Feb 7, 2021 2021-02-07 Sports & Recreation
The Super Bowl is this Monday morning, with the kick-off starting at 7.30am here in Shanghai. Get excited to watch the Kansas City Chiefs and the Tampa Bay Buccaneers thrash it out for glory. If interested in watching the big game somewhere else besides home, well here is a list of bars and restaurants planning to host watch-parties.

Enjoy a breakfast buffet and free flow, beer, wine & sparkling wine as well as entertainment for the entire family. Get early bird tickets by January 15th for an additional discount! In the Kids Fun Zone, there will be plenty for the little ones too: Flag-football Games, Video Games Area, & Free Candy Goodie bag. 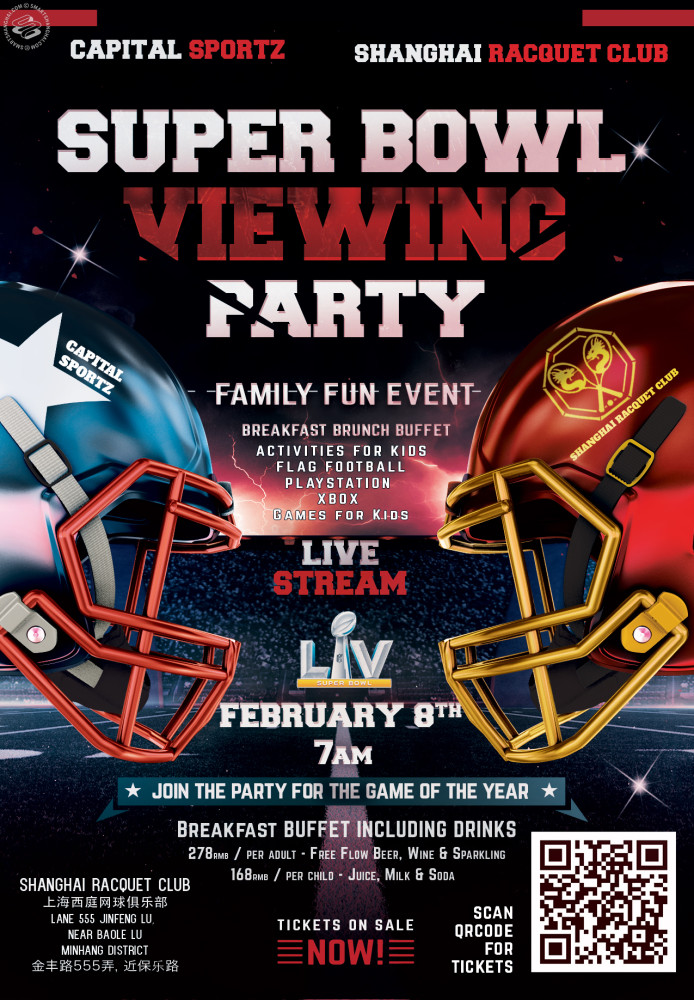 Monday morning football can be fun for the whole family. SRC is doing a breakfast buffet special for the Super Bowl, with free-flow Beer, Wine, Juice, Coffee, Tea and both House & Sparkling Wine. Doors to the event will open up at 7am, with the live broadcasting starting at 7.30am. There will be a Kid's Zone, where the little ones can enjoy playing flag-football, entertaining themselves in the video game room and snacking up on all of the sugary-goodness of a free candy goodie bag. Admission for adults is 278rmb and 168rmb for kids. If interested, make sure to scan the QR code on the flyer.

[SOLD OUT]
Bubba's is hosting a 50 person maximum capacity viewing party for this year's Super Bowl. So there's not a bad seat in the house. Entry price is 200rmb and includes breakfast, free flow drinks, and a chance to win cash and prizes! 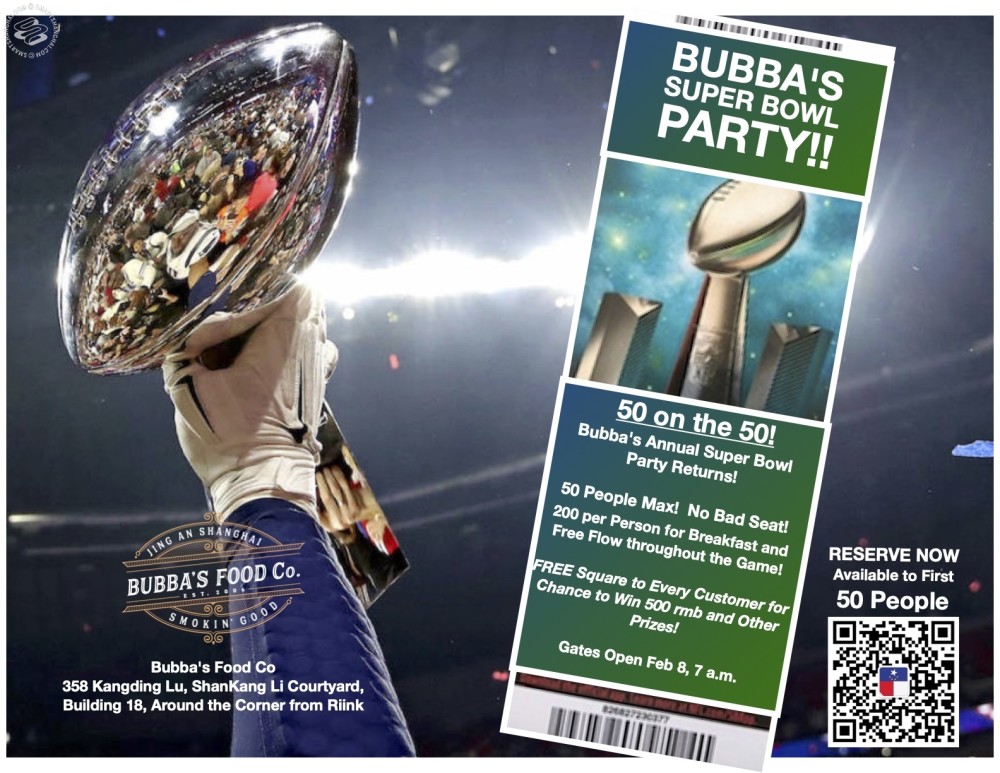 Get nice and tight inside Bubba's because they're squeezing a TOTAL of 50 guests at their venue – as they say, "not a bad seat in the house". Opening at 7am, there will be a breakfast buffet for everyone, as well as free-flow booze. There will be games where folks can win prizes and cash. NOW know this, entrance is 200rmb but as of last week, the venue has been booked out completely. Bloody shame about this, but who knows, maybe some poor person will miss their alarm and not turn up.

A full-buffet will be served at the event, with dishes such as chicken & waffles, cheeseburgers, buffalo wings and more. There are drinks deals as well: 45rmb Bloody Marry's, 40rmb Firestone Walker and 30rmb Cita Session Lager. Super Bowl Squares will also be played, where guests can purchase either 50rmb or 100rmb squares. Prizes of Rooster vouchers, hoodies and alcohol can be won. 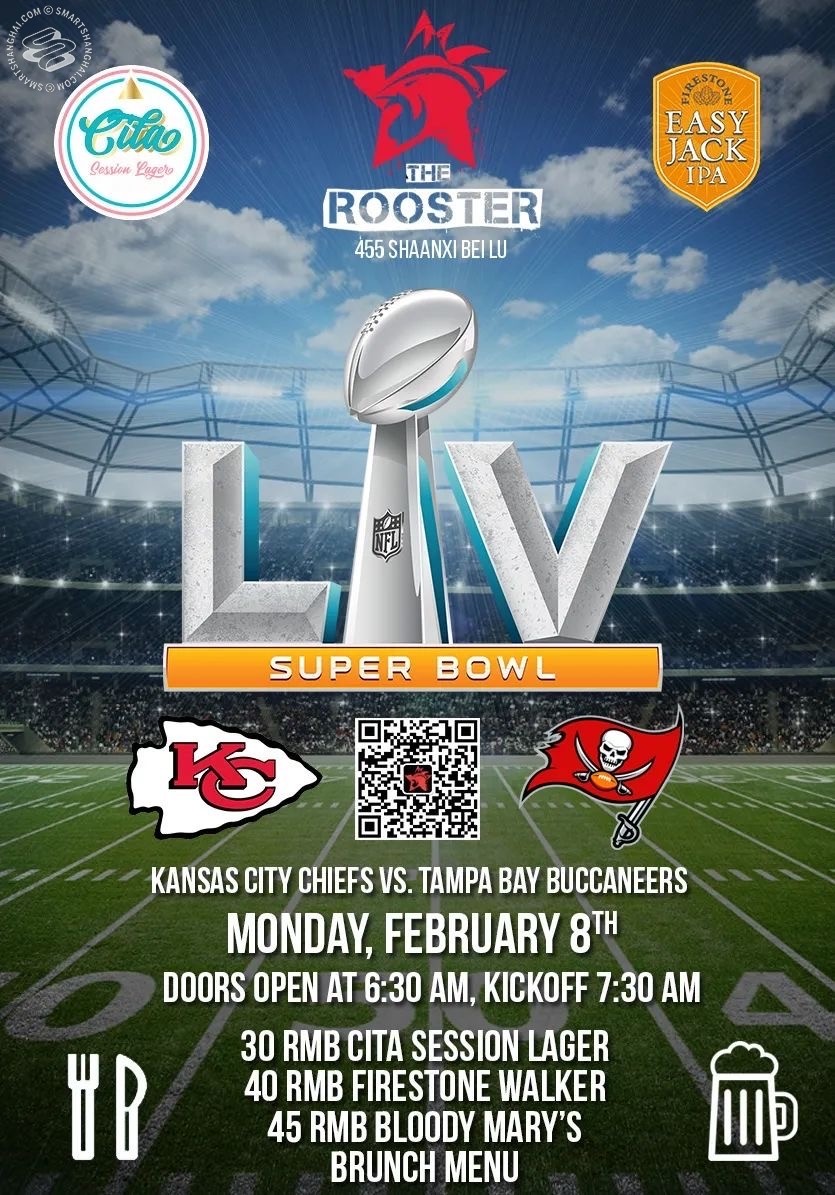 Never failing to stream the Super Bowl each year, the Rooster will open doors at 6.30am with the kick-off at 7.30am. They're also doing their drink classics: 45rmb Bloody Mary, 40rmb Firestone Walker and 30rmb Cita Session Lager. A full-brunch menu will be up as well, featuring classics like Fried Chicken & Waffles, Cheeseburgers, Buffalo Wings and more – the lunch set will be offered at 7am. The Rooster is also doing Football Squares, which is this 'bingo-esque' game (give it a Google if you want to know more). The place get's packed fast, so reserve a spot as early as possible.

THE BREW in Pudong is doing a buffet watch party for the Super Bowl. There will be a GIANT LED screen to watch the live game. The price for adults is 258rmb, while kids are 129rmb. The admission will come with a breakfast buffet, as well as unlimited soft drinks, beer, house wine and mimosas. Live out in Pudong? Well, don't worry because THE BREW at The Kerry Hotel is doing a brunch alongside the Super Bowl watch-party. Doors at the venue will open up at 7am, with the kick-off starting at 7.30am. There will be a buffet breakfast, featuring cereal stations, egg bars, all-you-can-eat noods' – enough to stuff a face. Wash down food with unlimited drinks: sodas, beers, house wines and mimosas. Admission for adults is 258rmb and 129rmb for kids.

[UPDATE]
If planning on purchasing tickets at the door, understand that there will be a limit of 50 tickets sold. Come as early as possible.

Cages is doing Super Bowl, and are featuring their breakfast buffet. Drinks won't be included in the deal. There is a pre-sale deal that can be purchased on their WeChat mini-program; scan the QR code for it. I 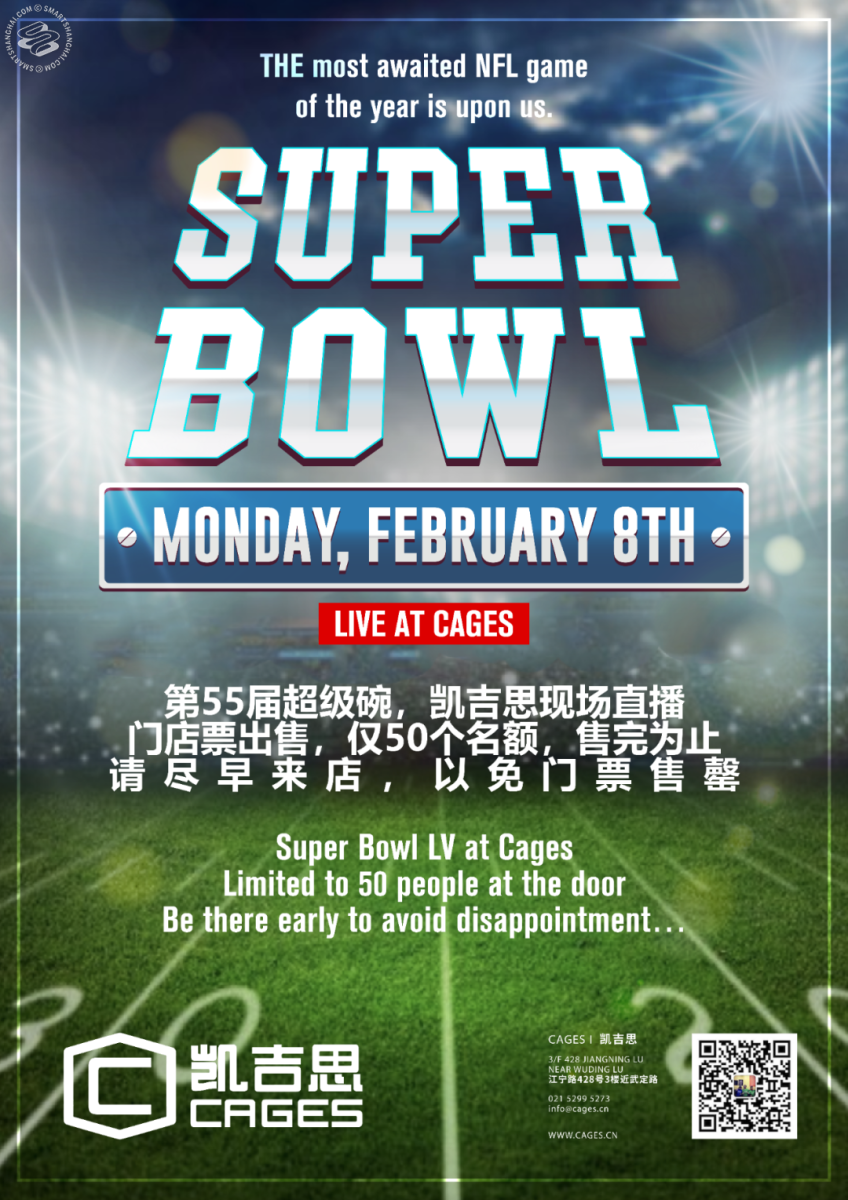 Massive open space, one humongous screen and towering plates of nachos, Cages always goes big when it comes to live sports events. The bar is doing a special breakfast buffet deal for all guests attending, with pre-sale tickets at 168rmb and at-the-door for 228rmb. The kick-off is at 7.30am. Know that there will be a limitation of 50 available tickets for patrons planning on purchasing at-the-door admission. It would be best to come as early as possible. Drinks won't be included with the admission deal, so people are going to need to buy their IPAs at the bar. But hey, at least the screen is big.

Come see the Super Bowl live at The Camel. There will be a breakfast menu for the event. If Cages sounds too big and Bubba's tight situation sounds a bit concerning, then maybe think about The Camel. The Xuhui bar will be the ideal place for anyone hoping to spectate the game in a simple non-stressful environment. This will also be the bar's first Super Bowl watch-party since last year's move. There will be a breakfast special deal for guests, to help fill that belly as the game plays on. Entrance is free, and the kick-off starts at 7.30am.

Super Bowl LV is live Monday morning. Come see the Kansas City Chiefs versus Tampa Bay Buccaneers. The Shed will be taking reservations, and doors open at 6am. The breakfast menu is available and there is no cover charge. The Australian pub chain is crossing cultures with America and will be streaming the Super Bowl match at both their venues: the Hongmei Lu location and Shaanxi Bei Lu location. Doors will open as early as 6am, with the kick-off starting at 7.30am. If folks are eager for seating, best to call in – the pubs will be accepting reservations. The weekend breakfast menu will be offered, so fans of the "Shed Big Breakfast" can get excited. There is no cover charge.

On February 8, Big Bamboo will be presenting the 2021 Super Bowl LV Live, between Patrick Mahomes' Kansas City Chiefs and Tom Brady's Tampa Bay Buccaneers. The game will be played in Tampa, Florida, at Raymond James Stadium, marking the first time a team will play the championship game in its home stadium. The old school Shanghai sports bar chain is hosting Super Bowl watch-parties at both it's Hongqiao and Jinqiao branches. The kick-off does start at 7.30am, and BB's brand new brunch menu will be offered all morning. Expect dishes such as Breakfast Burritos for 88rmb and Steak & Eggs for 138rmb. There is no cover charge for attending.