We Finally Got to Ride in Didi's Driverless Car

I think the emergency driver was as nervous as I was, but it was hard to say if it was because a mini-typhoon had just dumped on us, or because we were in a two-ton vehicle cruising down a public road at 50kmh and he didn't have his hands on the wheel.

We were out at an auto expo park in Jiading, an hour from downtown, because we'd finally gotten a chance to try out the new Didi driverless car. With a billion dollars sprinkled on the project by Apple and another half a billion from Japanese investor SoftBank, there's a lot of confidence that this is the Next Big Thing™ in transportation. 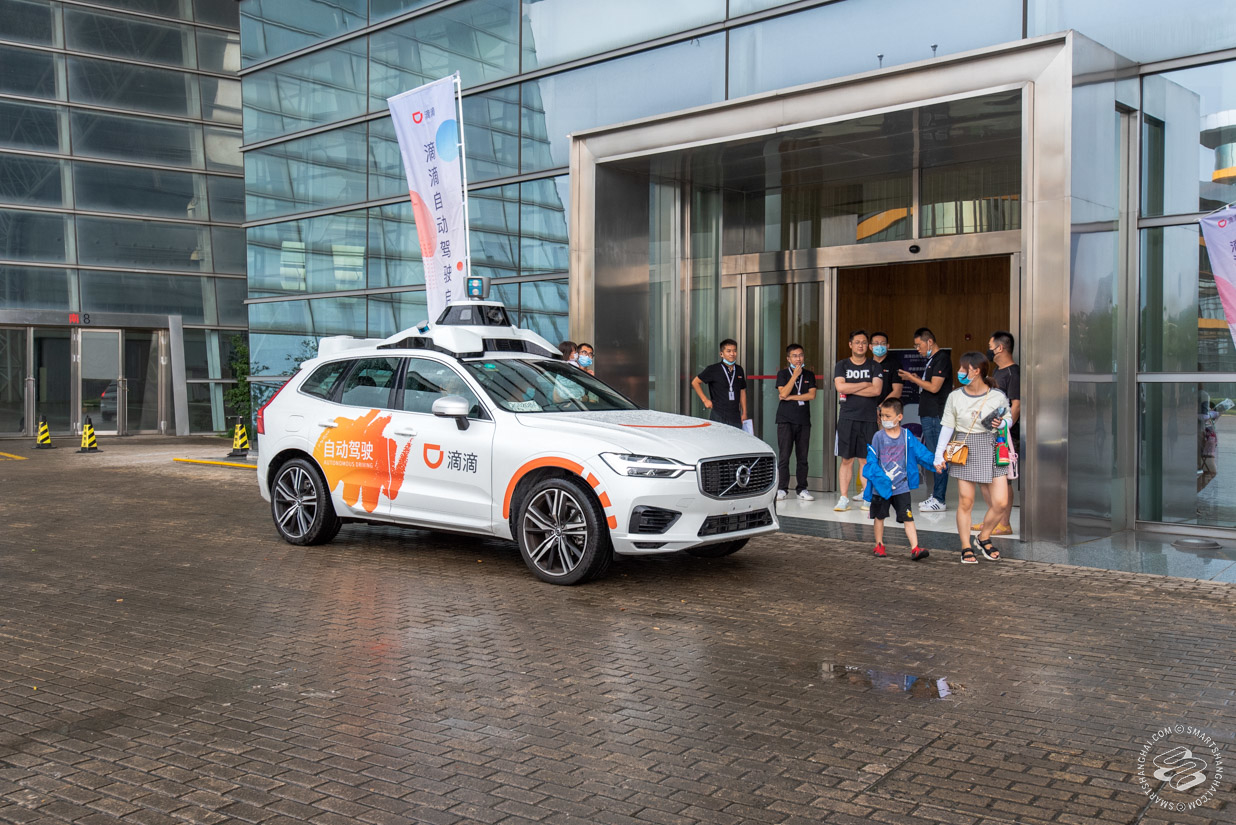 Didi say autonomous vehicles will provide more and better service in areas that are under-served, which is exactly what you would say if you were raising a legion of robot taxis to seize the roads. 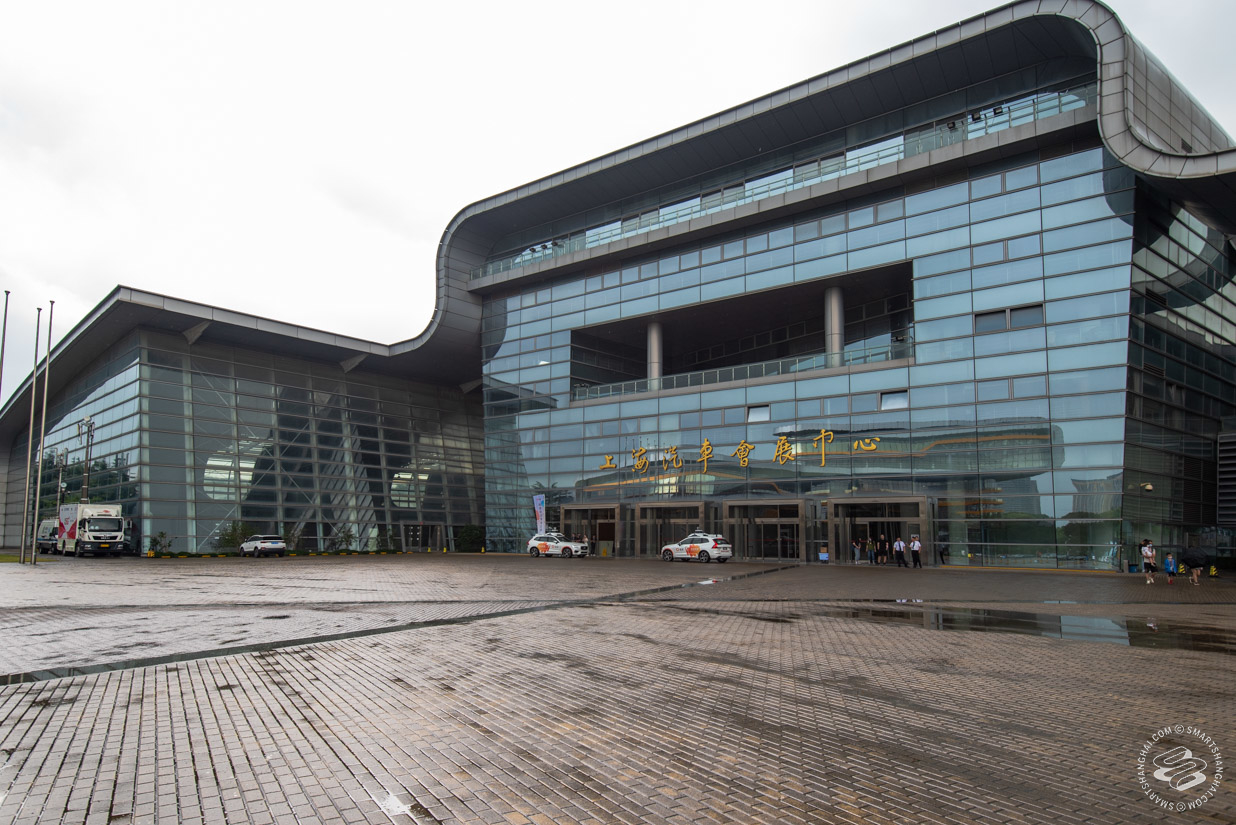 Back in June, Didi opened the program to public testing in Shanghai. Didi users could sign up using their app, pick a date and head out to the testing districts for a ten-fifteen minute test-drive (with emergency back-up driver). Unfortunately, our attempts to sign up were met with silence for over a month, as we lamented a couple weeks ago. But that article did result in a colleague (bless them) reaching out to us with a PR contact at Didi, who arranged a special trial. Media privilege. 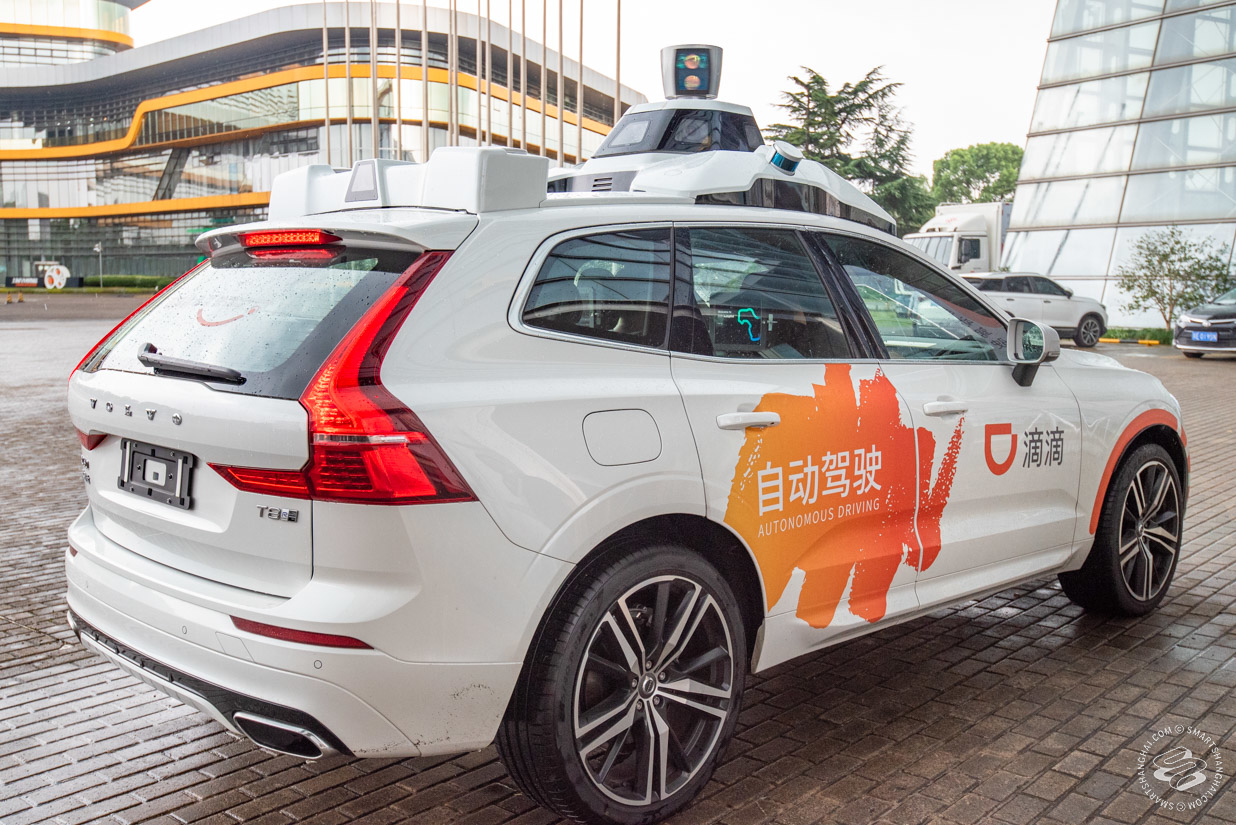 The car that pulls up in front of the expo building is a Volvo — safe, reliable Volvo — sporting a sci-fi contraption on the roof. It looks like it has gone through some design iterations since 2019: a little less DJI-drone-perched-on-the-roof and more like the superstructure on the Enterprise. The sleek unit houses 360-degree sensors and a spinning radar on the top that creates a 3D map of the car's surroundings as it drives. 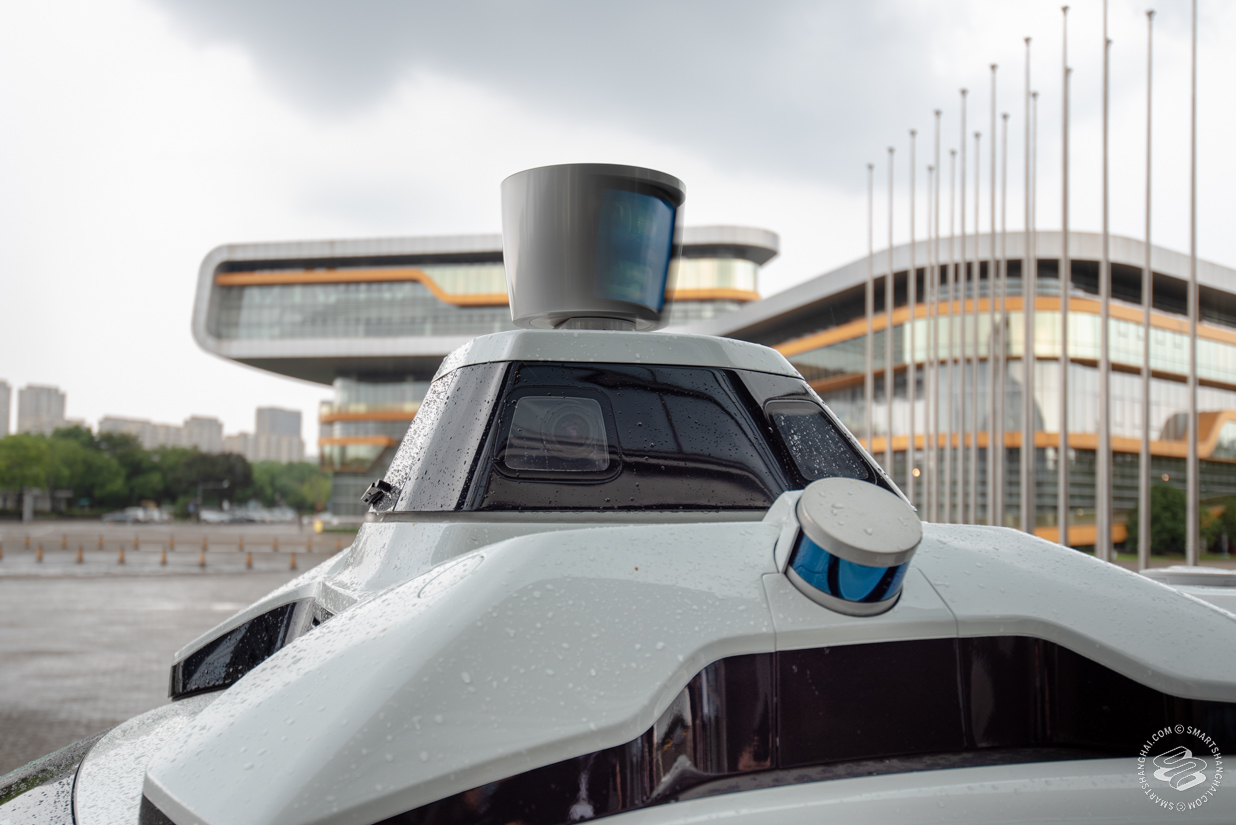 When the service goes live (whenever that is), you'll be able to order the autonomous car from a tab on Didi just like any other car. You get in the back, scan a QR code, and take off. 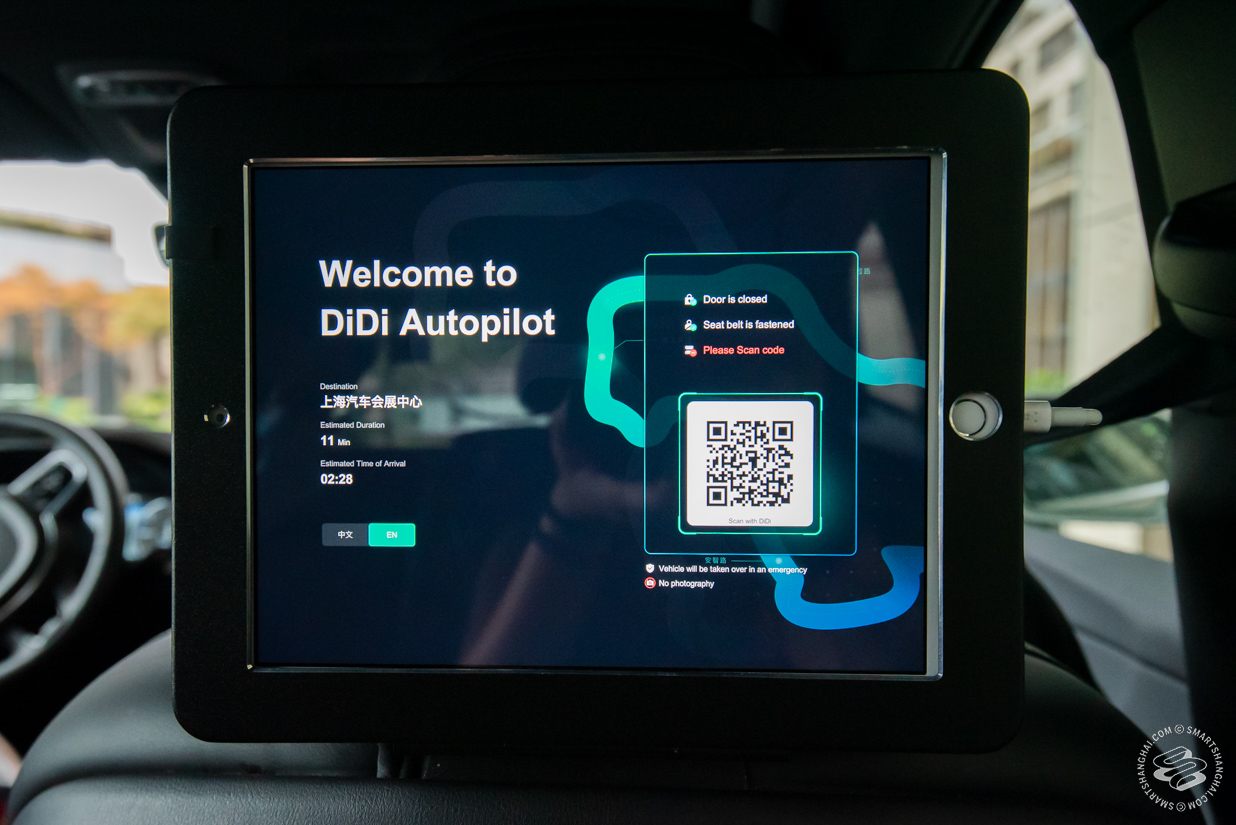 There are three buttons on the console by your feet, "Stop," "Go," and "SOS," which do... essentially what you'd expect them to. 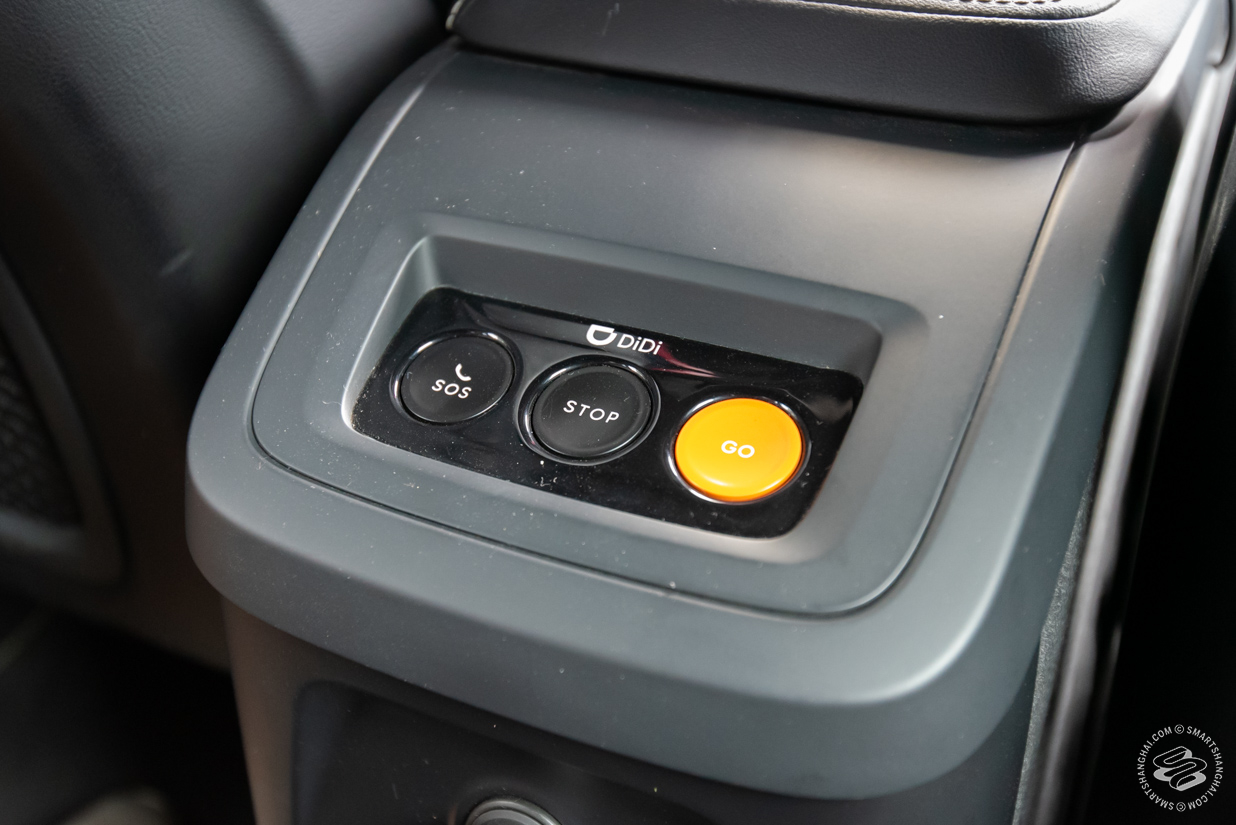 They're not operational yet. For now, we have an emergency driver that has his hands juuuust barely touching the wheel the whole way through, in case he needs to step in (called a "disengagement" in the parlance). Even when the cars hit public roads, we can probably expect the emergency drivers to stick around for a long time. 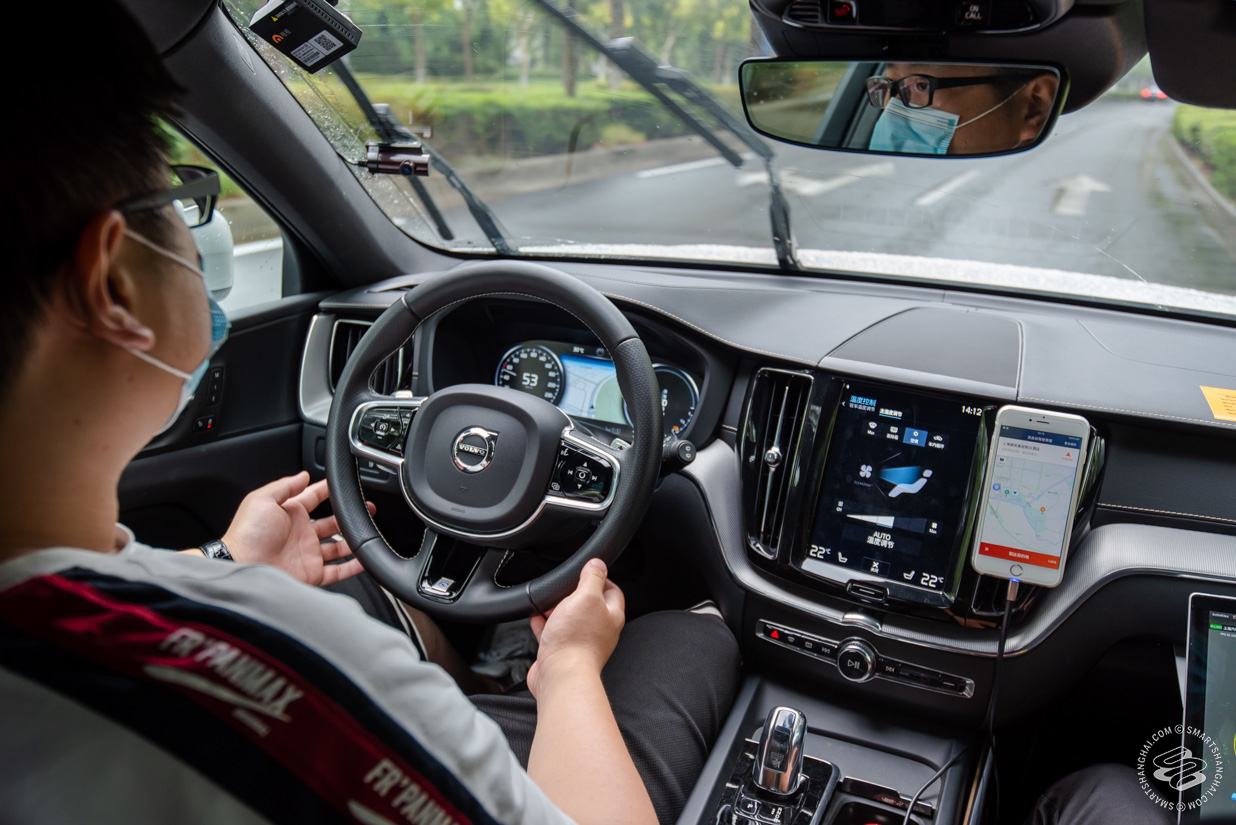 I kept my eye on his hands for most of the ride, mostly to make sure that this wasn't some sort of elaborate scam or magic trick. I'll be honest, watching his wrists twitch periodically made me a little uncomfortable. He may just have been very diligent, but he did not have the bearing of someone who, having done several of these test drives already, felt he could just lean back and let the car take care of itself.

I'm not projecting. I was totally calm and relaxed about putting my life in the hands of programmers I've never met and who will not care when I die. 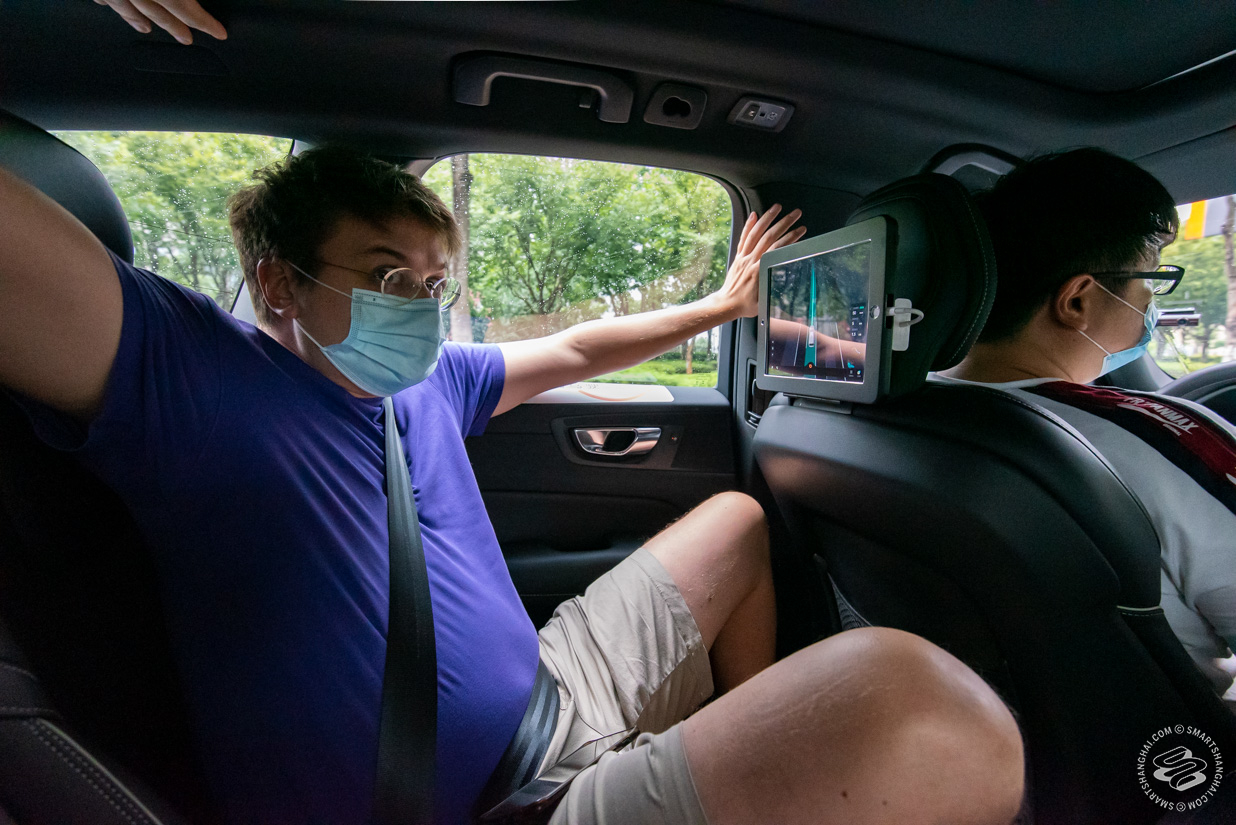 Making me feel a little more comfortable was the guide in the passenger seat (are they all passenger seats?) who would calmly explain things like "the car is slowing because it has detected a pedestrian crossing". That was nice of him, but Didi driverless cars already have silky voice recordings that'll relay the same information automatically in either English or Chinese. 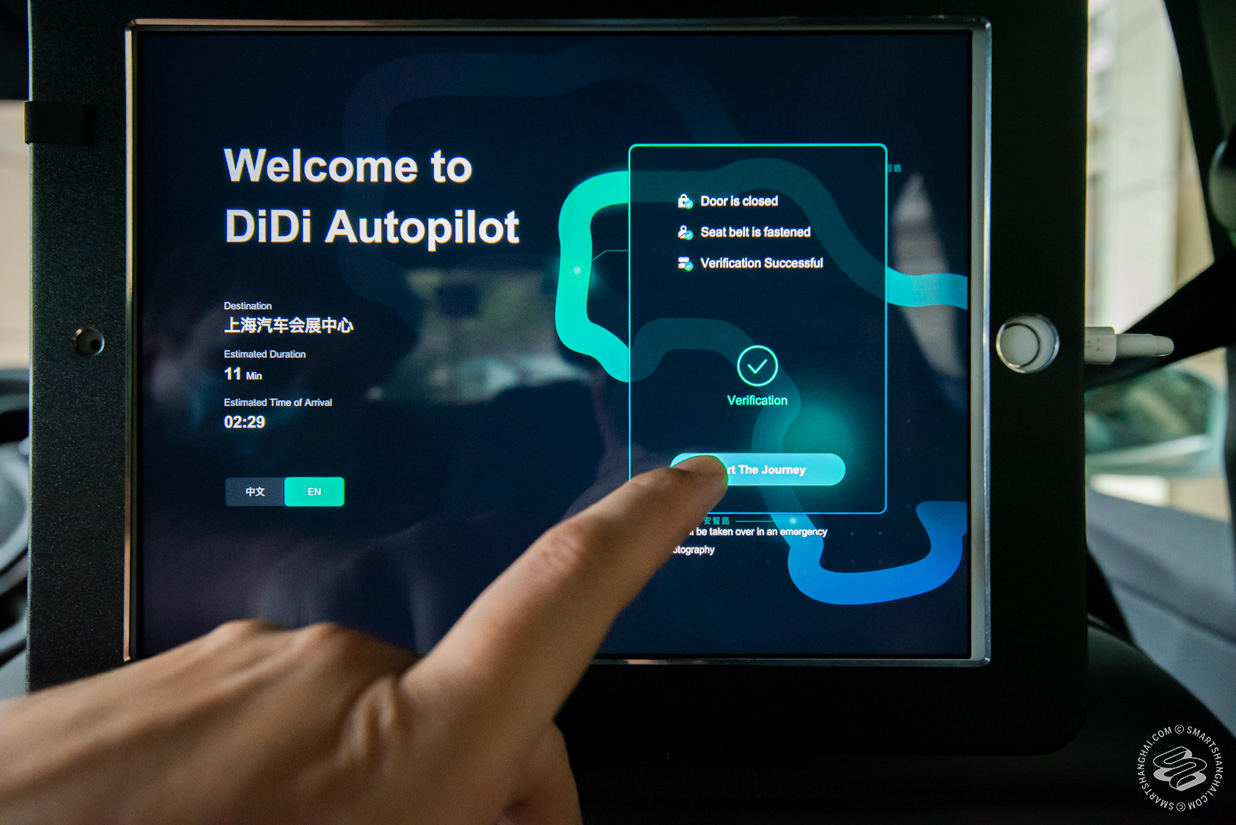 I suspect the passenger was there more to handle any glitches in the Matrix from his laptop. Peeking over his shoulder, I could see what looked like the view from the car's radar. It was fascinating to see our surroundings appear as blue dots and instantly be classified as vehicles, pedestrians or obstacles. 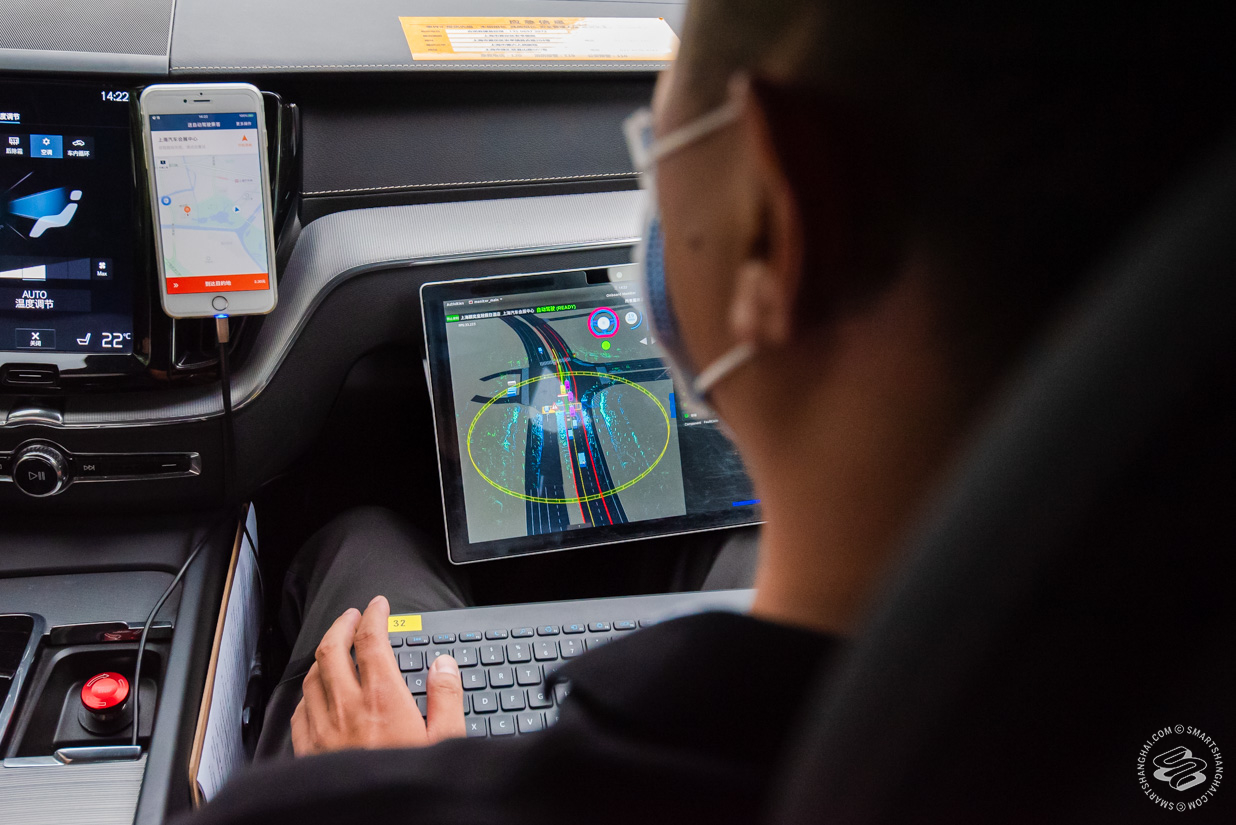 There's a similar read-out on the back of the seat in front of you, which will presumably be there when this debuts for regular drivers, which lays out the car's path and its surroundings. You even have the option to change the view from more top-down to forward-facing, like it's a video game. 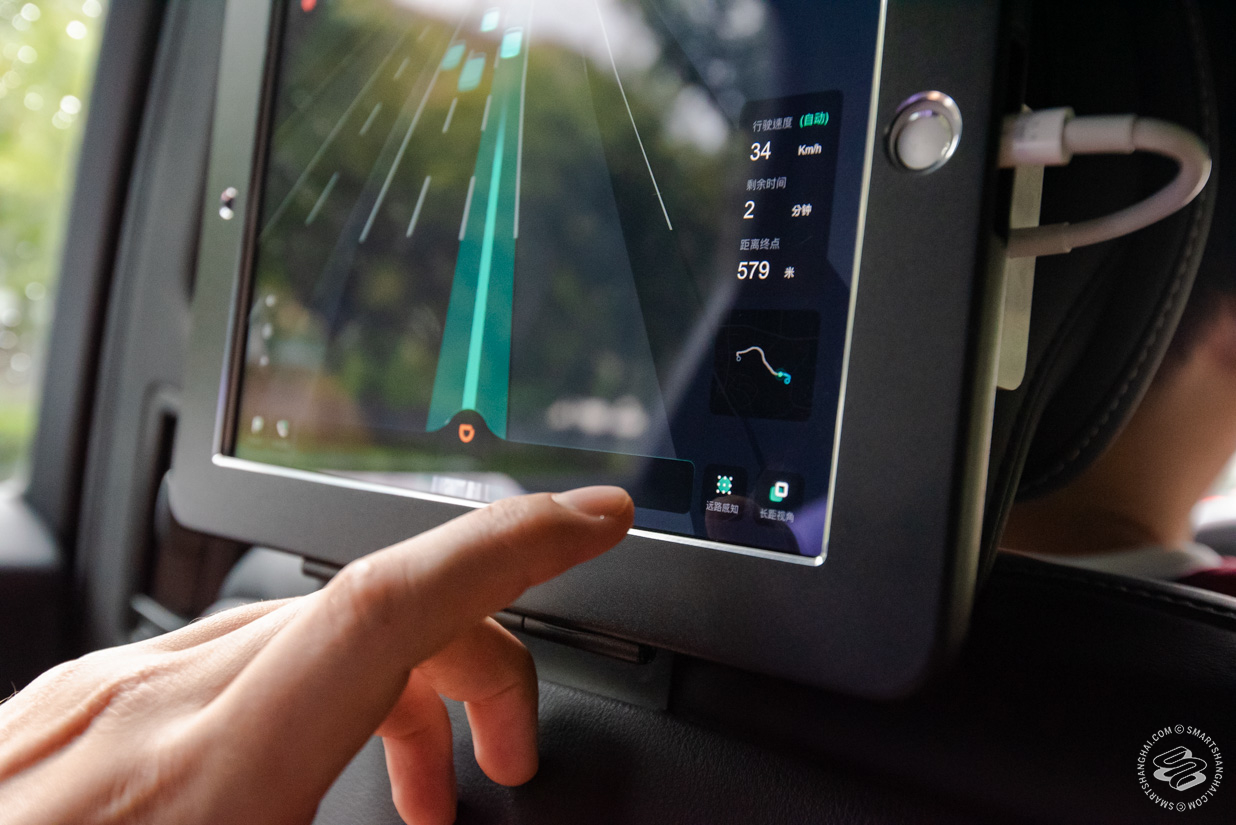 So how does it drive? Serenely. Cautiously. It keeps to a strict 50km/h (which still feels harrowingly fast when it's a robot driving), stops at least a full car length behind the vehicle in front of it and makes parabolic U-turns with the steady, consistent velocity of a graphing calculator. At one point, the car wouldn't go at a green light until a large truck that was straying a little into our lane on the right had gotten a length ahead. 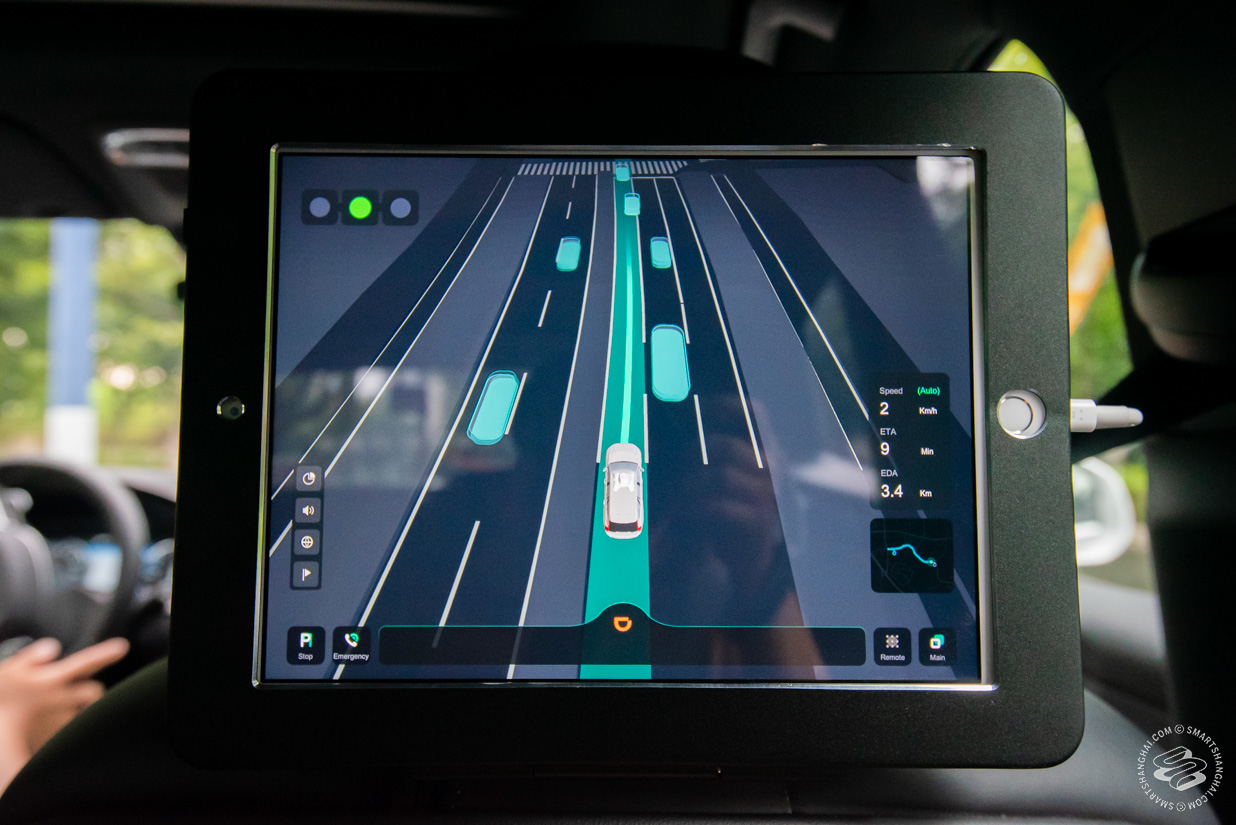 Another time, it braked suddenly when it detected a pedestrian standing at a bus-stop; a human driver would've been able to see from his posture and the fact he was looking at the bus several meters behind us that he wasn't planning to step out into the street, but it's good to see that "playing it safe" is built into the program. 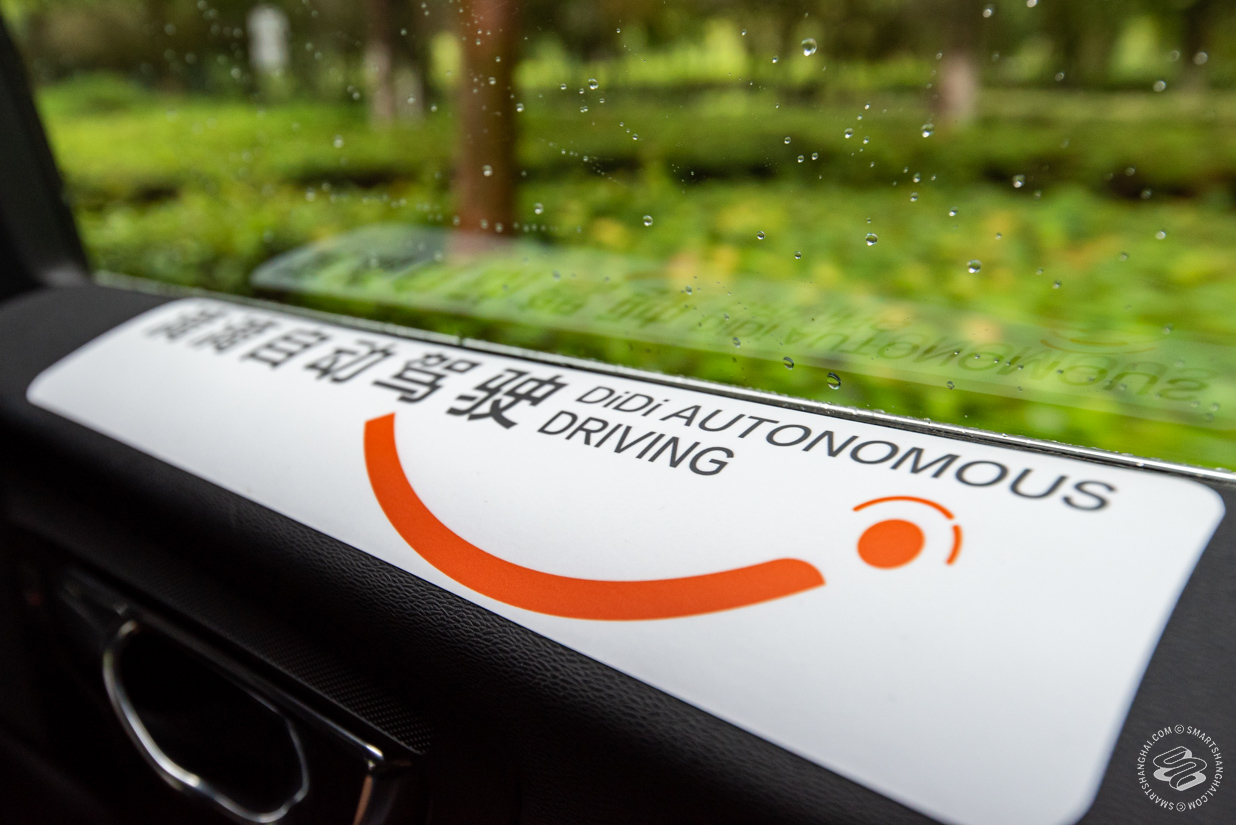 After a fifteen minute ride around the area, we pulled back into the lot under the control of the flesh-and-blood emergency driver ("there are a lot of families wandering around," we were told, which is a good sentiment but also a little unsettling if you think about it). At the end, you leave a star-rating, just as you would with a normal ride. I don't know what'll happen to cars that get bad ratings. Blade Runners, probably. Naturally, I gave it five stars. Building up that goodwill with our new robotic overlords, but also because after the trepidation died down, it was incredibly rad to be sitting in a car that drives itself.

It drives itself! What a time to be alive! 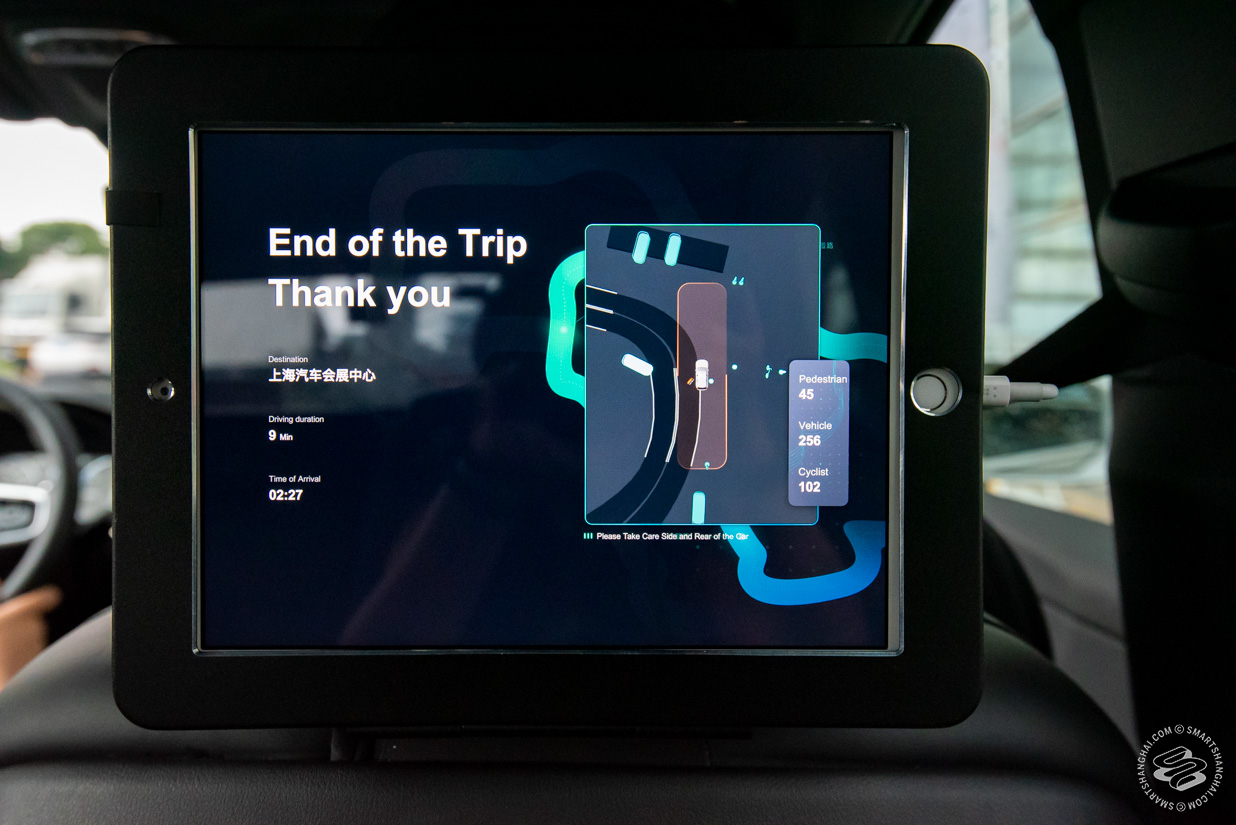 The Future of Driverless Cars

At the moment, Didi has 100 vehicles being tested worldwide. We saw maybe five or six while we were up in Jiading. Most of the ones we saw were Volvos, but a Lincoln pulled in as we were leaving. It's unclear when they'll be rolling up to a sidewalk anywhere near you, though. There are a mass of technological, financial and regulatory obstacles in the way. COVID probably really helped, too.

Didi has previously announced that they had plans to have cars on the roads roads in Beijing, Shanghai and Shenzhen in 2020 and testing overseas by 2021 — according to their website, they've acquired public road testing licenses in California — but for now, it seems like they're operating these test drives for beta users in Jiading. 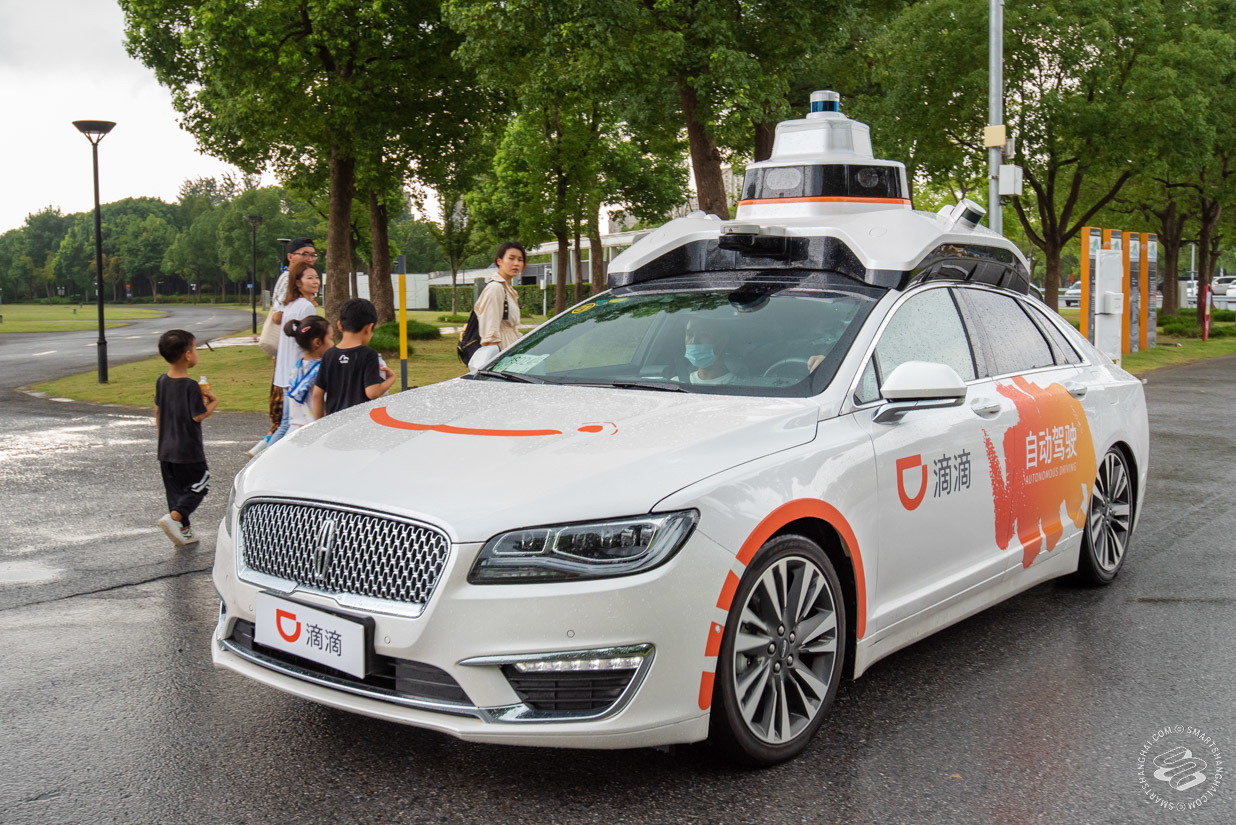 Still, barring anything really dramatic, it seems inevitable that driverless cars are going to be a part of Shanghai's future. You could try signing up for a test run yourself, but don't get your hopes up; there's apparently something like 50,000 people waiting in line, and they don't accept walk-ins at the auto expo. 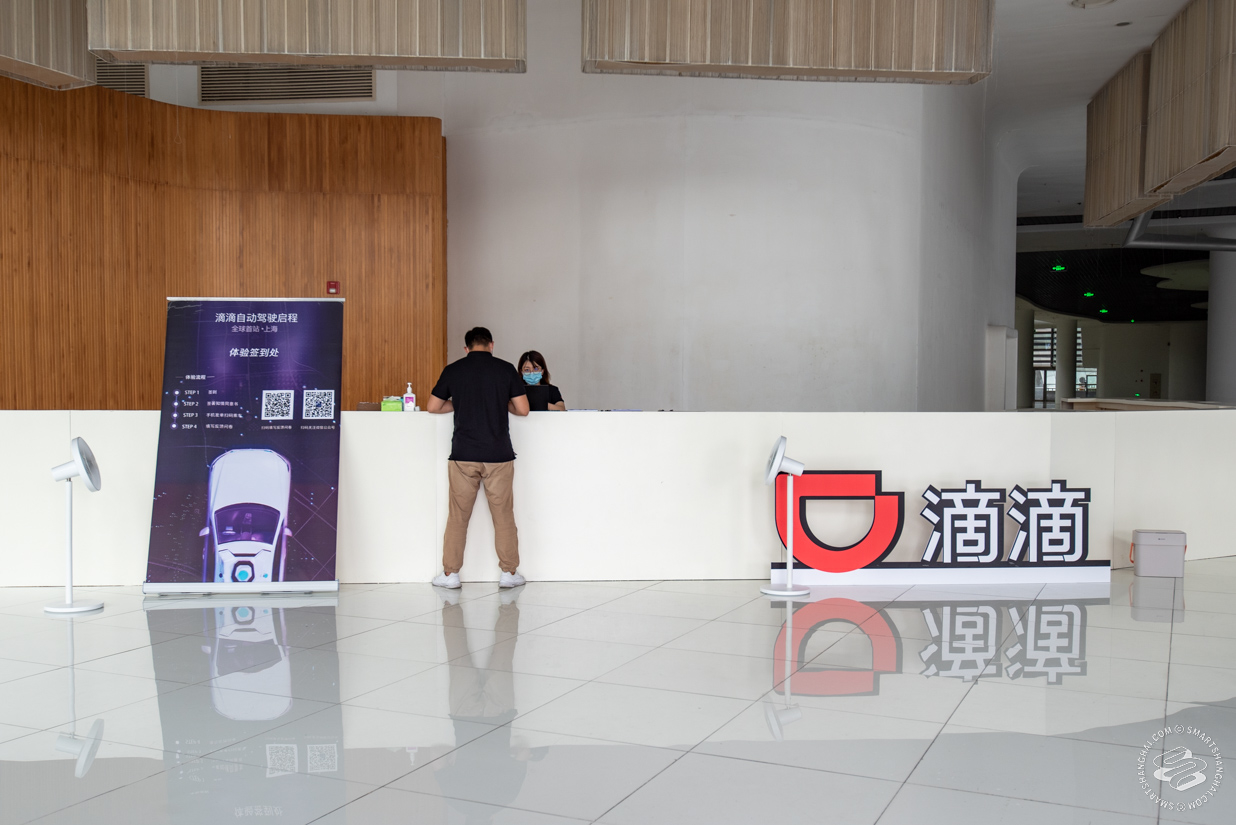 Didi says they want a million of these cars on the road by 2030, and even that seems ambitious. It will be a long while before we see autonomous Didi cars cruising around downtown, and even longer without an emergency driver. As cool as the experience was — and it was very, very cool — we're going to need to collect a lot more data before a machine can confidently navigate Changle Lu during rush hour. 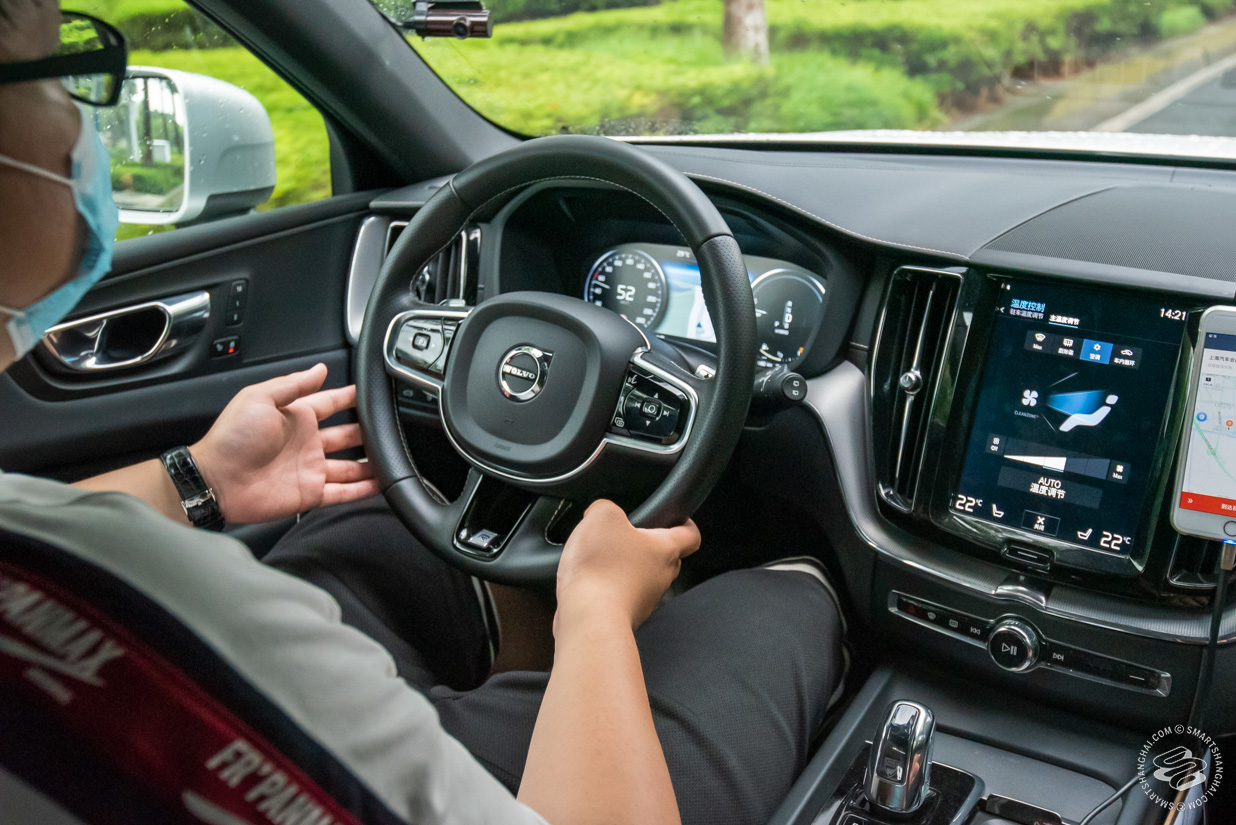