Time to start thinking about the holidays.
By Christopher St Cavish
2020-09-04 14:30:00
October holidays are less than a month away, and if you haven't planned anything, or you haven't thought of anything, we've got six ideas for different kinds of trips.

FOR HIKING AND NICE HOTELS 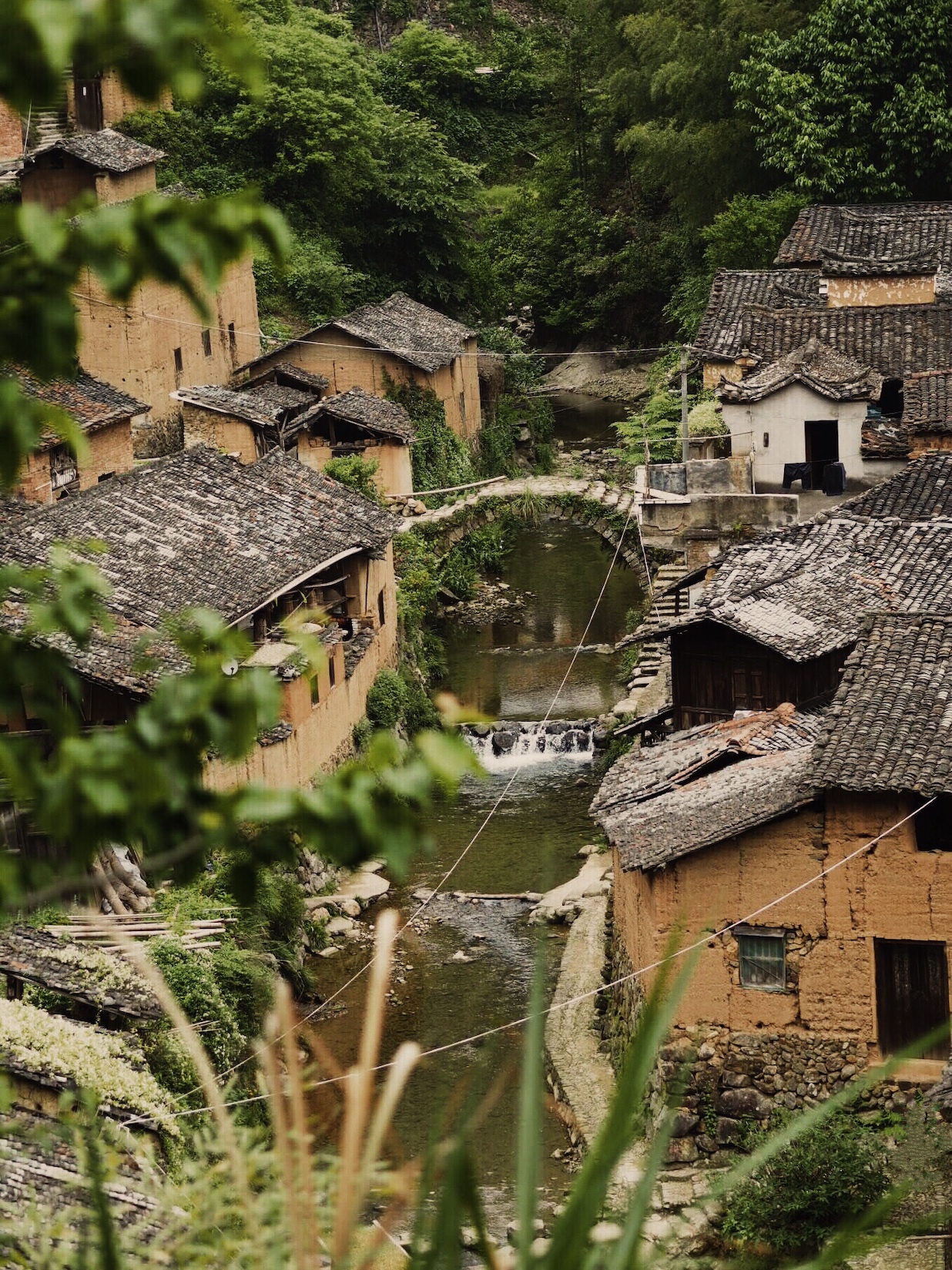 Lishui is the most natural county in Zhejiang province, which is saying a lot. The county is at the very bottom of Zhejiang, bordering Fujian, where the mountains start to get big. It’s the least developed, in terms of economy, and the government is now promoting it as a natural tourism destination.

That means small villages, hiking, chicken soup and the country life. That’s the backdrop to Tao Ye (桃野), a boutique hotel that opened in 2020 in Songzhuang, a 600-person village that’s 600 years old. The same people who designed naked Castle in Moganshan did this 15-room hotel. Once you get there, there’s not a ton to do — you’ll need to entertain yourself with hikes, walks, reading, that kind of thing. 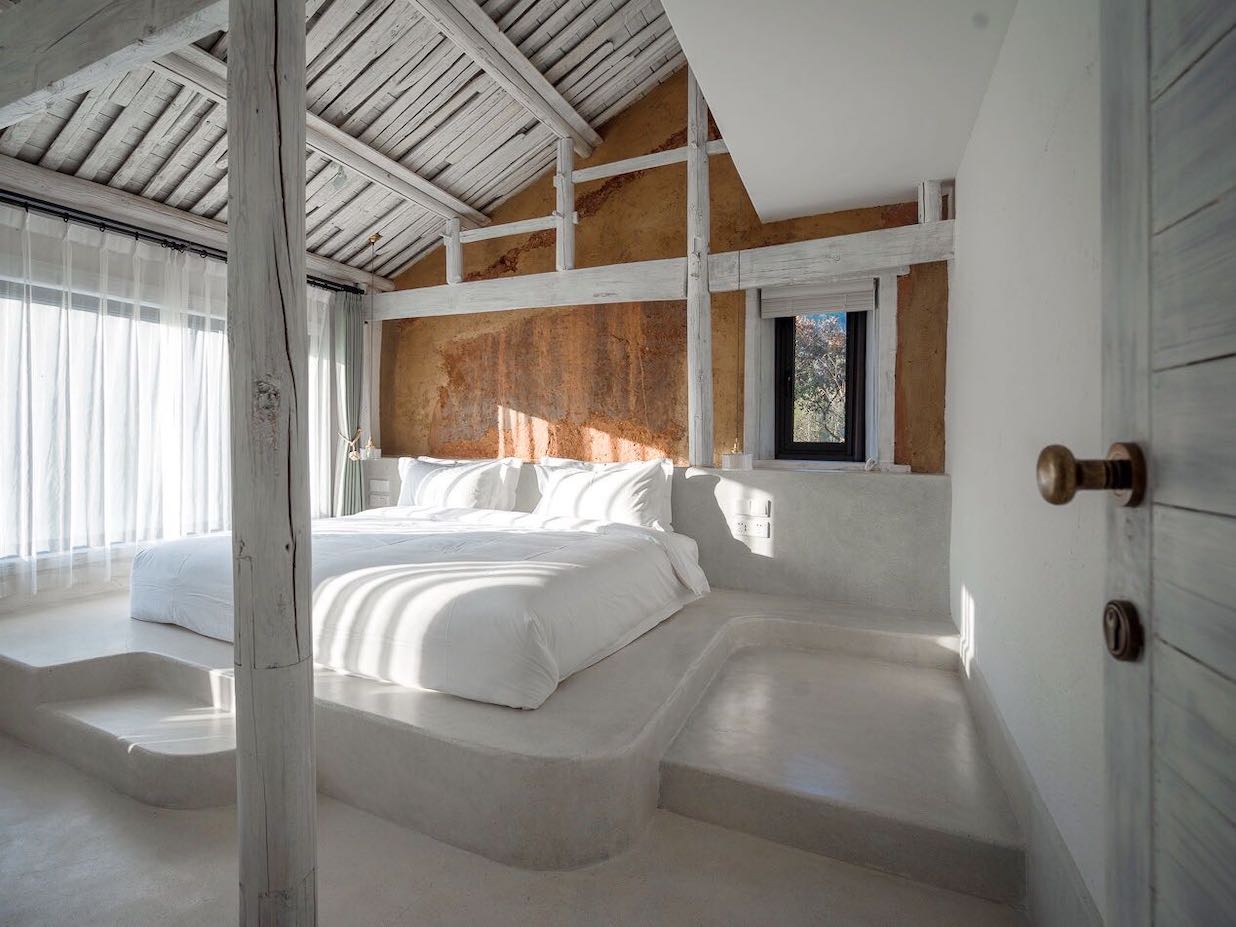 A room at Tao Ye

The owner isn’t from Lishui — she used to work in a qipao studio on Anfu Lu — but fell in love with the place in 2017 after visiting ten villages there. When she went, it was peach season and she was surprised to see how good the peaches were and how cheap the villagers sold them. She decided to help them sell their peaches online and in that first year, sold ten thousand pounds of peaches for a better price than the villagers were getting before. That was her key to the village — everyone liked her after that. It’s also the reason the first character in the hotel’s name is “peach”. 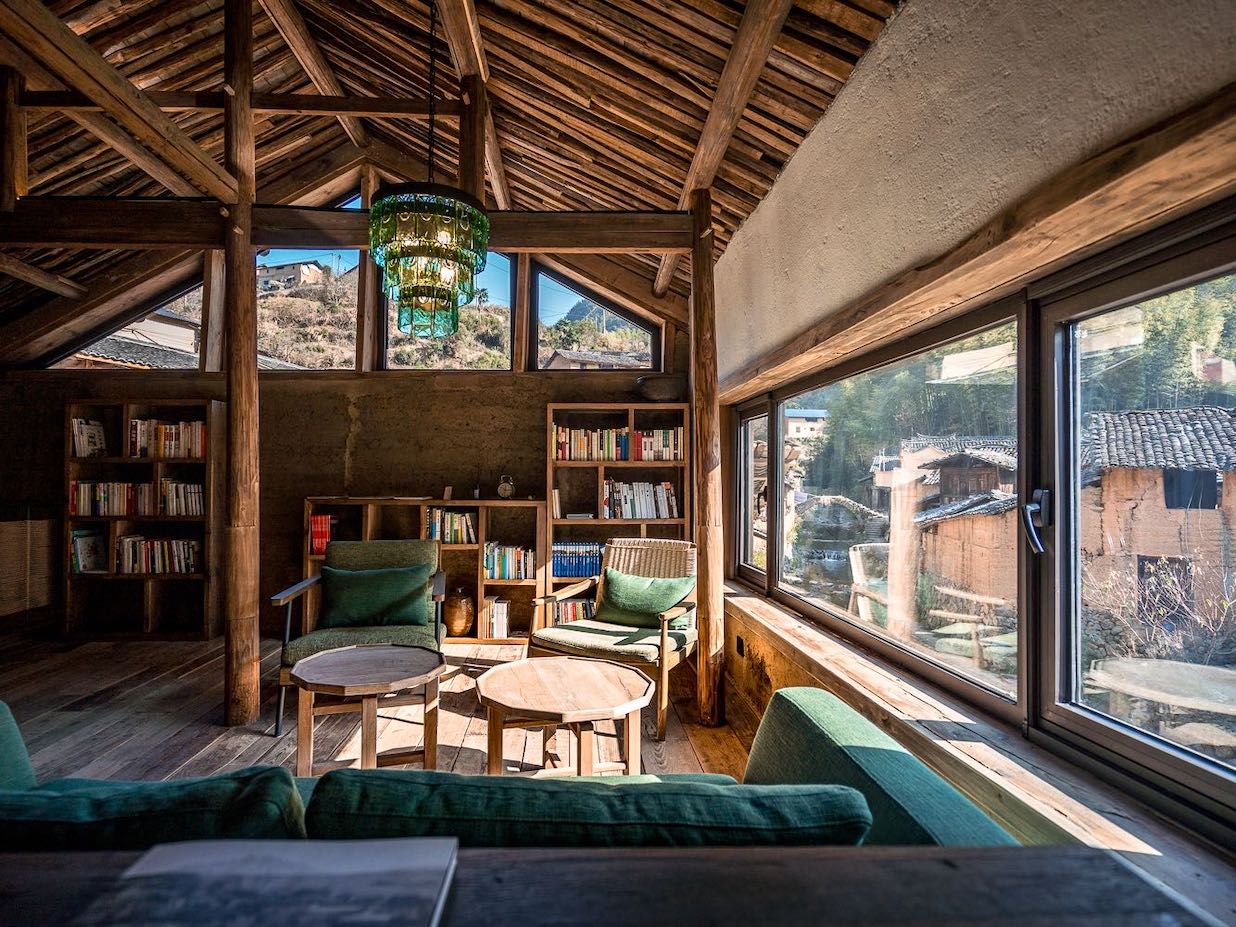 Tao Ye is about four hours from Shanghai, including the 2.5 hour high-speed train from Hongqiao Station to Lishui and then a 90-minute car ride from there (about 275rmb in a Didi). Contact Tao Ye directly to book: 139 1636 9679 or taoyesongyang on WeChat. 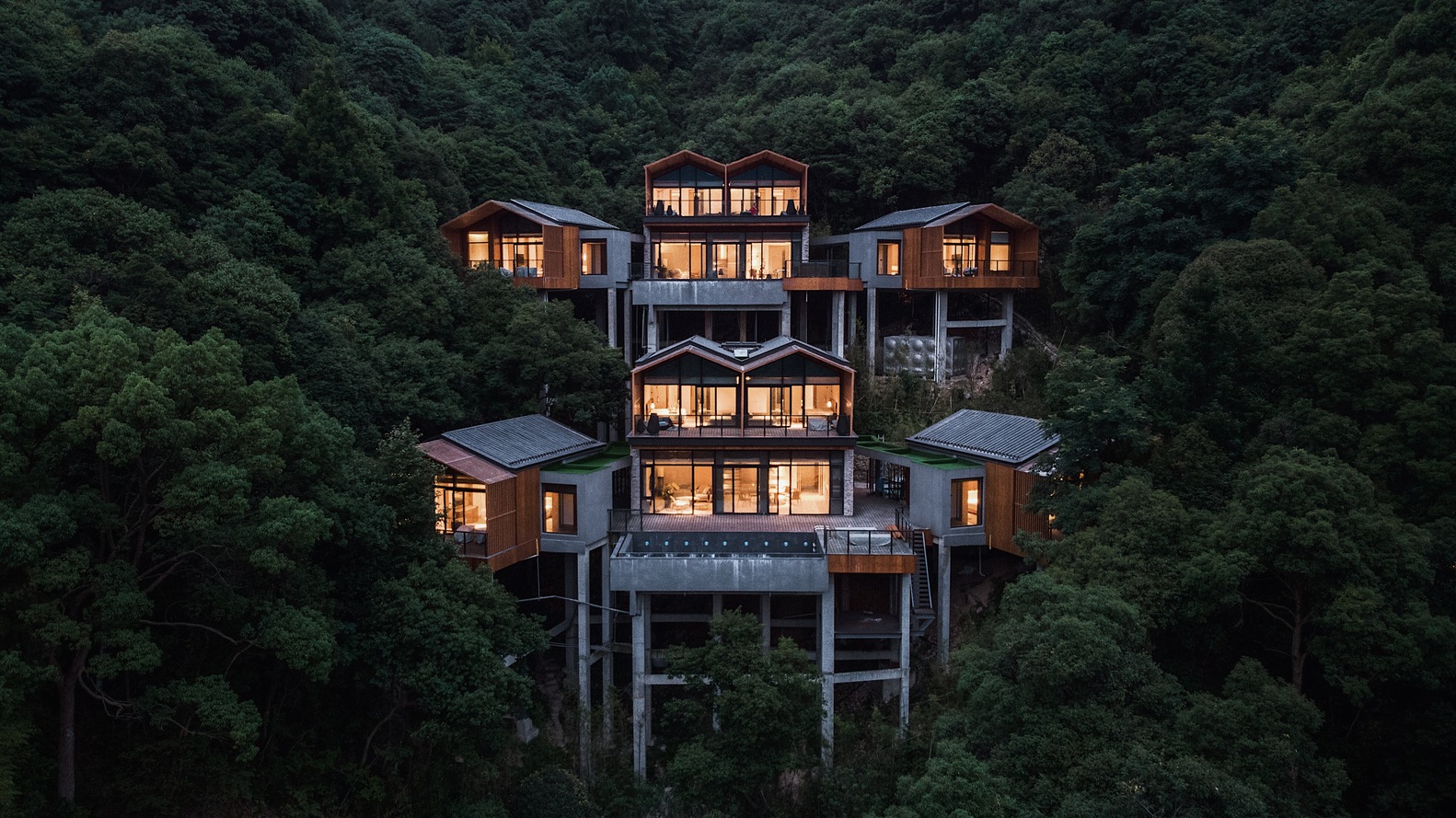 Presidential suite at The Chedi

Ninghai is the best county in Zhejiang for hiking. We have hammered this home time and again. But it’s also famous for its hot springs, which is what drew luxury hotel brand The Chedi (宁海安岚酒店) to open a resort in the mountains in 2019.

The 100 rooms are spread out over the large property, with many of them tucked into the bamboo forest. That seems to be both a plus — quiet, seclusion — and a minus — walking a good distance to the breakfast buffet in the morning. The general consensus on the online booking sites is that the hotel has great facilities but the service and maintenance might be a little lacking for the price of the rooms, which start above 4,000rmb a night on Ctrip. 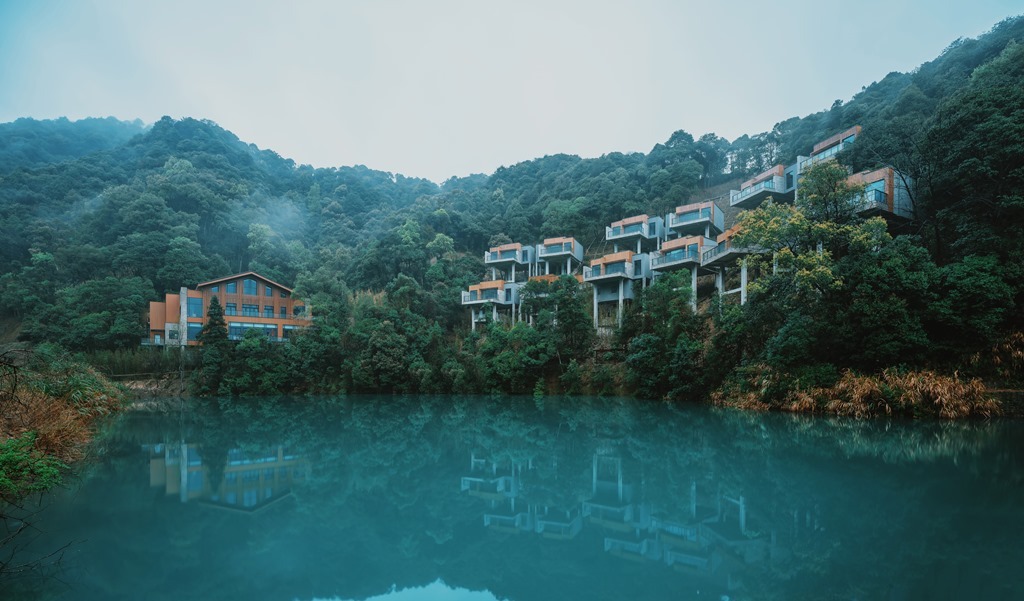 Still, if you want a luxury hotel to use as a base for hiking through the national trail network, this seems to be the only option.

If you’re ok with something that’s not five-star, there’s the Shi’eryi Hot Spring Villa (宁海拾貳忆温泉山居) and the Nanyi Hotspring Villa (宁海南苑温泉山庄) nearby.

There are 14 trains a day from Shanghai Hongqiao to Ninghai, which take as little as two hours and fifteen minutes, depending on what time you leave.

FOR CULTURE AND NOODLES 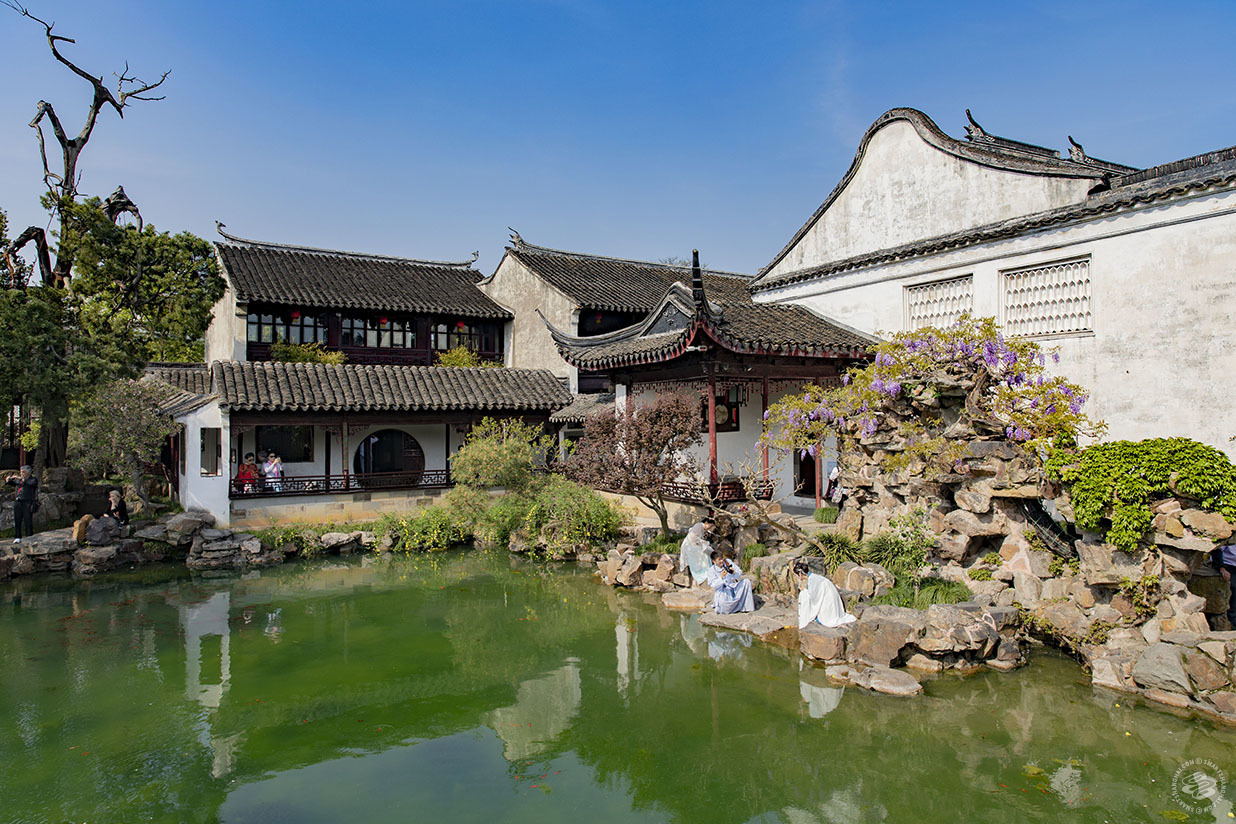 Garden of the Master of the Nets

2020 has been the year of Suzhou for me, with trips almost once a month to check out new hotels, old hotels, old museums, new (to me) restaurants, old noodle favorites and verifiably ancient gardens.

Every time I visit, I like the place more and I find new and interesting people to talk to and interesting and new places to see. It helps that my travels are led by my stomach, and my stomach is strongly attracted to noodles, and Suzhou is my favorite place to eat noodles in East China. I’ve written about it a lot. Too much maybe? But padding around a garden or soaking up I.M. Pei’s architecture at the Suzhou Museum certainly beats another boring day at home on the couch, drugged up on Netflix. 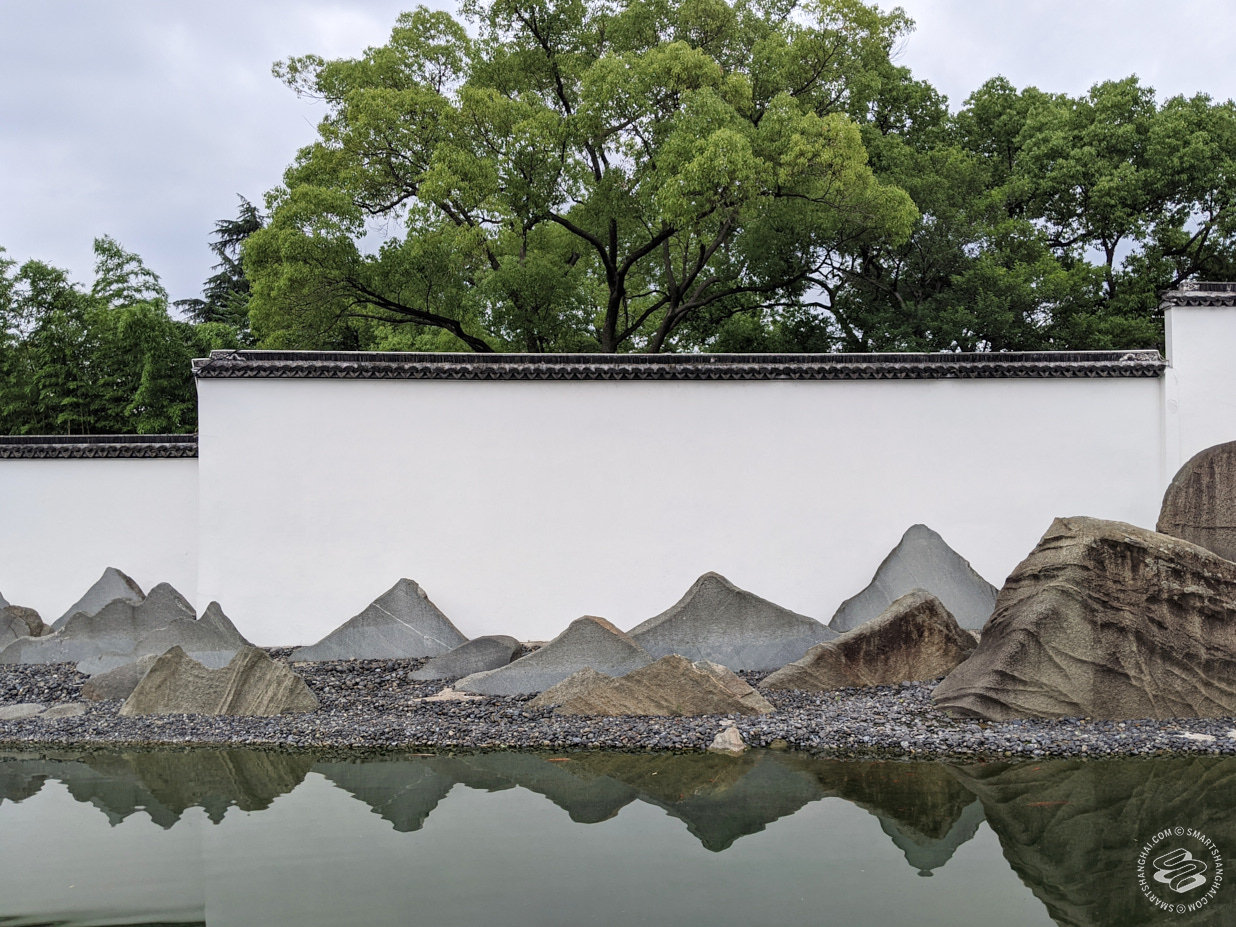 There are more than 200 trains a day from Shanghai to Suzhou, some as quick as 23 minutes from Hongqiao Station. 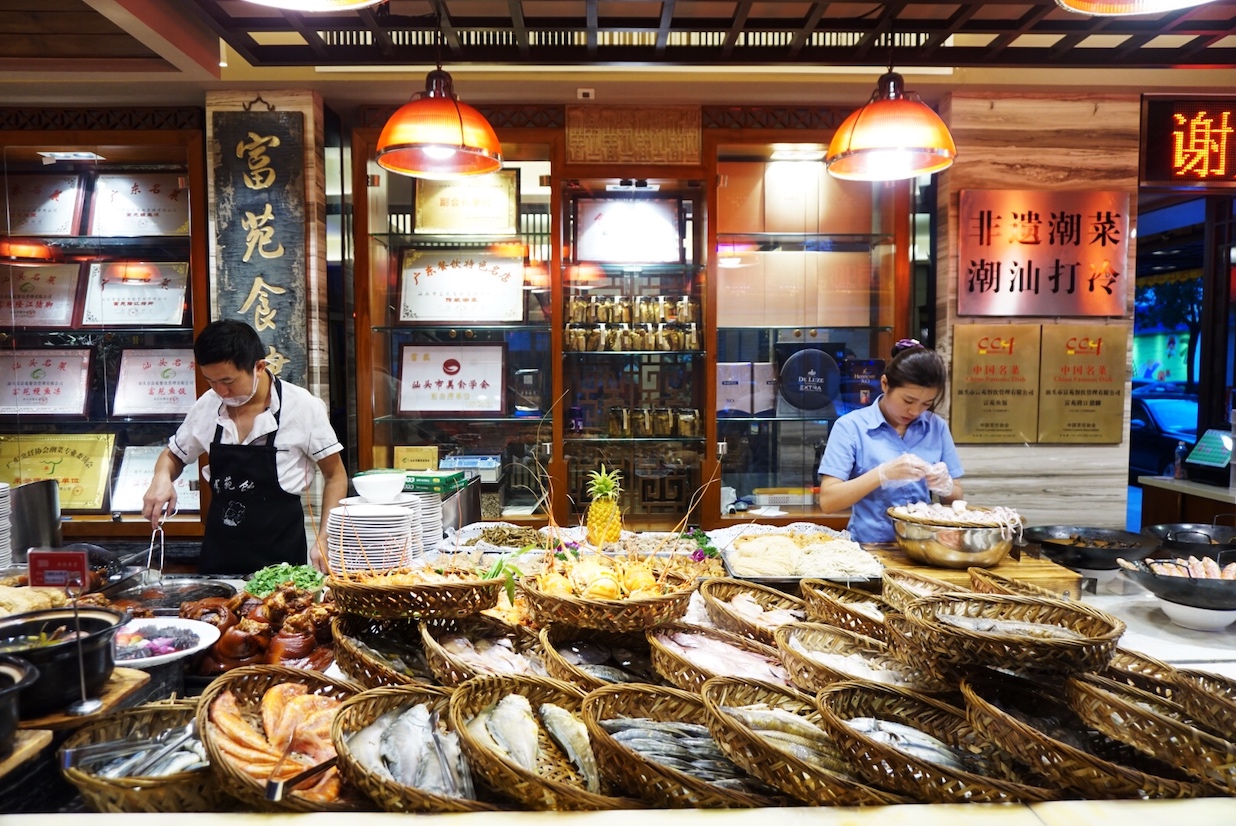 This part of Guangdong, famous for food (where isn’t in Guangdong, really), has been on my bucket list for more than a decade. I still haven’t been, so I turned to two Cantonese friends who have visited recently: Ms. P and Jun of Brut Eatery and Ms. P’s Burnt Basque Cheesecake. 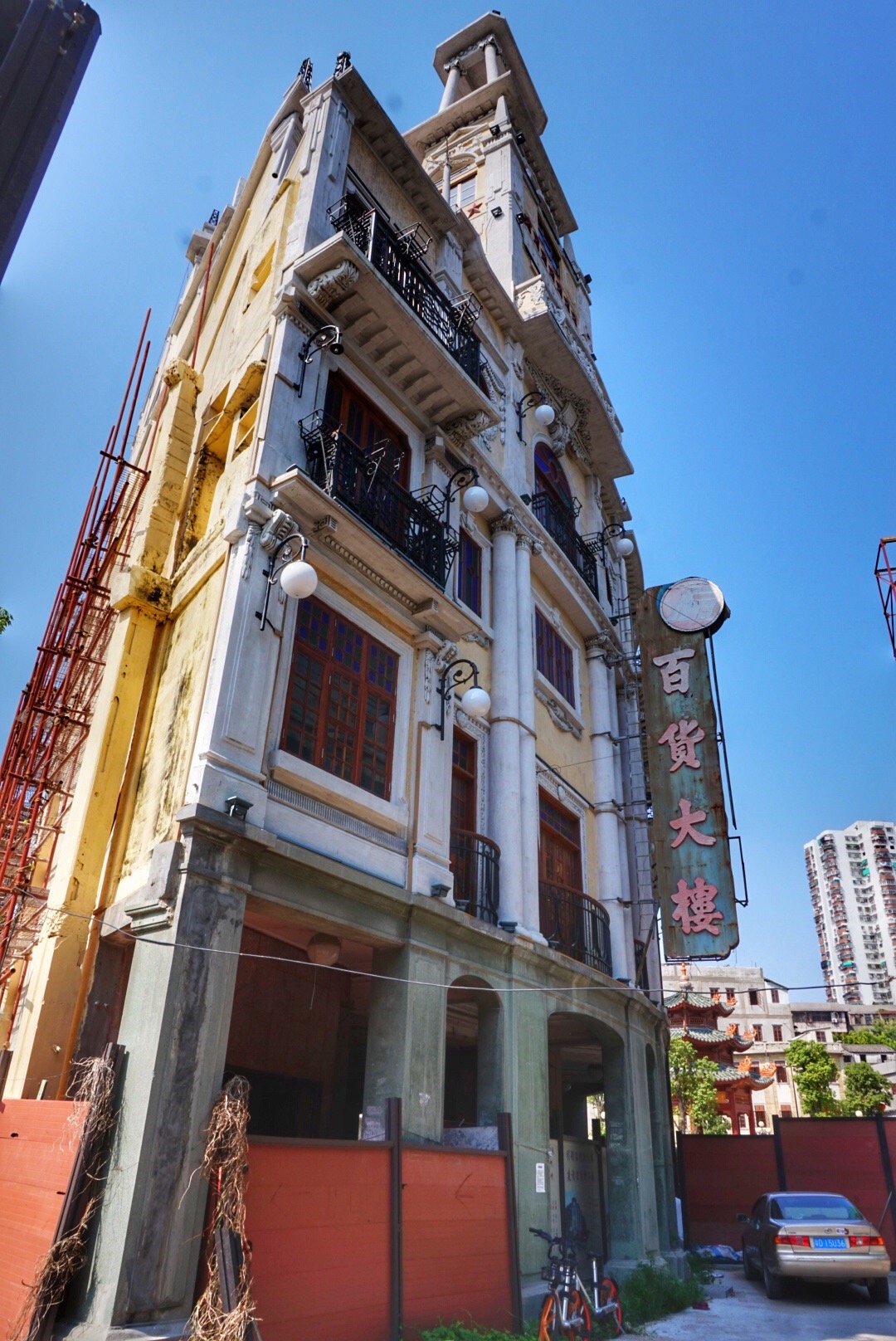 “Shantou, a city still building its first metro line, is small enough to maintain its charm and character. There’s not much in the way of tourist attractions, except for its food, which is more than enough for us.

People here love beef. This is the region that the famous Chaoshan-style beef hotpot comes from. It’s also known for its beef noodle soup, which is almost identical to Vietnamese pho. 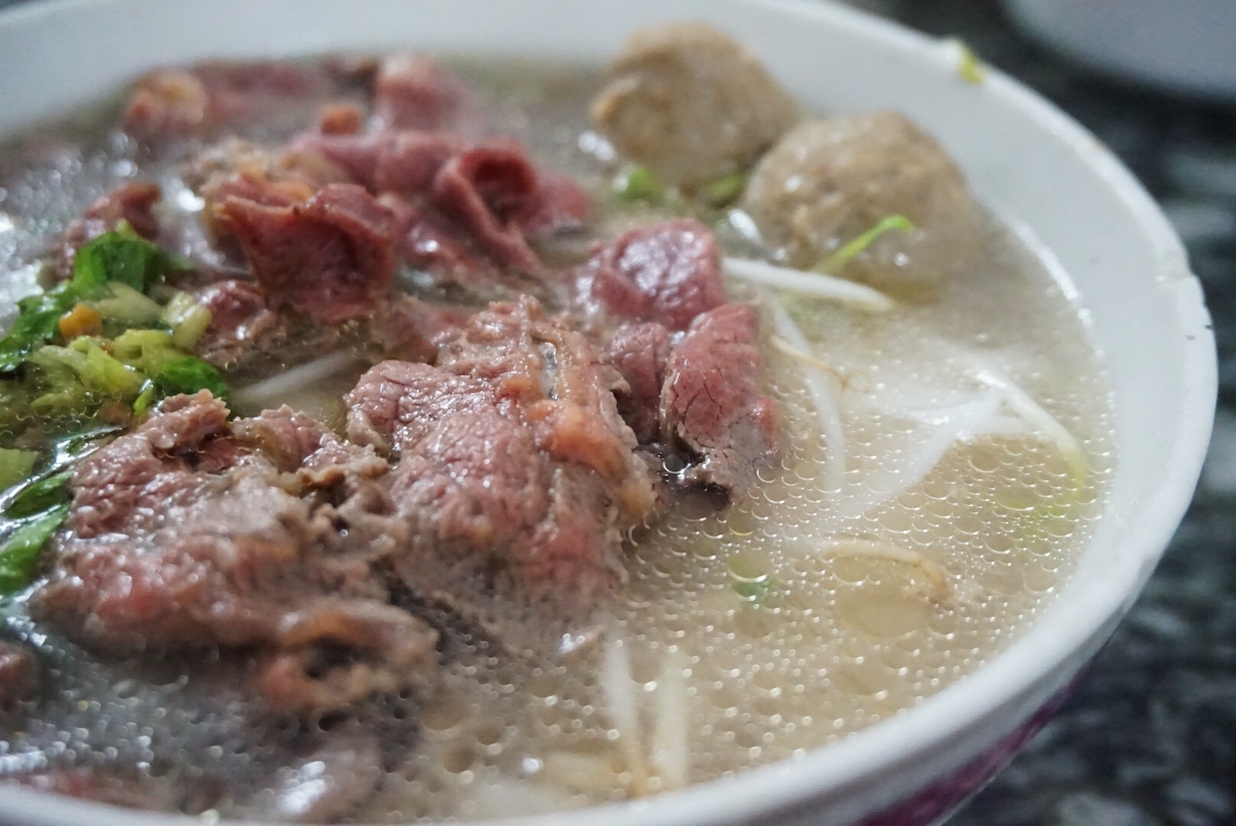 Handmade beef balls are a specialty, sometimes still made by a row of shirtless men pounding a huge piece of meat into mush with two metal poles, though the handmade variety is less common.

Rice noodles, called guotiao here, are also super popular, both in noodle soup and stir-fried. In Chenghai, a neighboring district a 30-minute drive from “downtown”, they layer the noodles like a lasagna and deep-fry them, a method you rarely see elsewhere. Even the changfen, the steamed rice noodle popular all over Guangdong and the world, is heartier here, loaded with meat and vegetables and seasoned with fried garlic and pork lard. 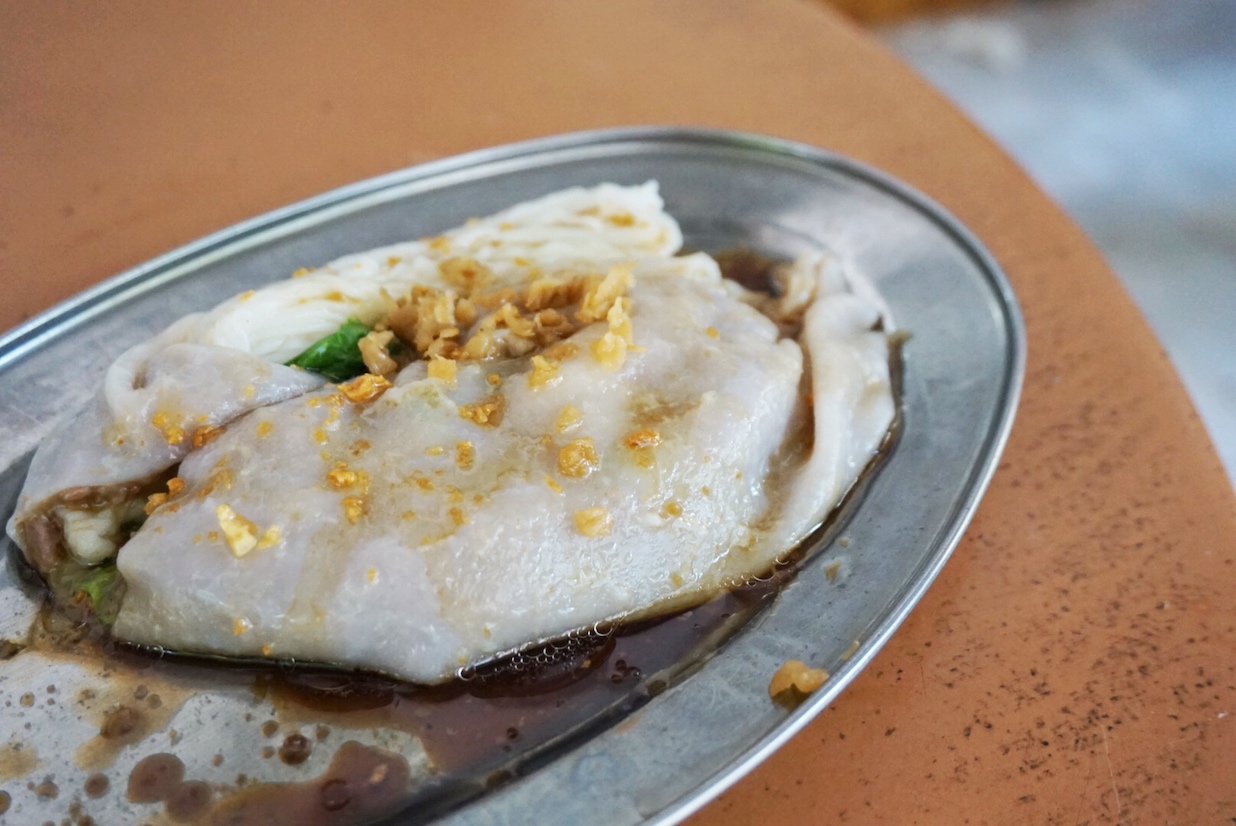 Seafood is also big here, since Shantou is next to the sea. A local specialty is wine-marinated raw crab. Think of it as the ceviche of the East. Seafood is eaten very simply, in its purest form, just steamed or boiled (called yufan, or literally fish rice) with a sauce of fermented soy beans for dipping. Most fish is pre-cooked and served room temperature, always with a bowl of congee. 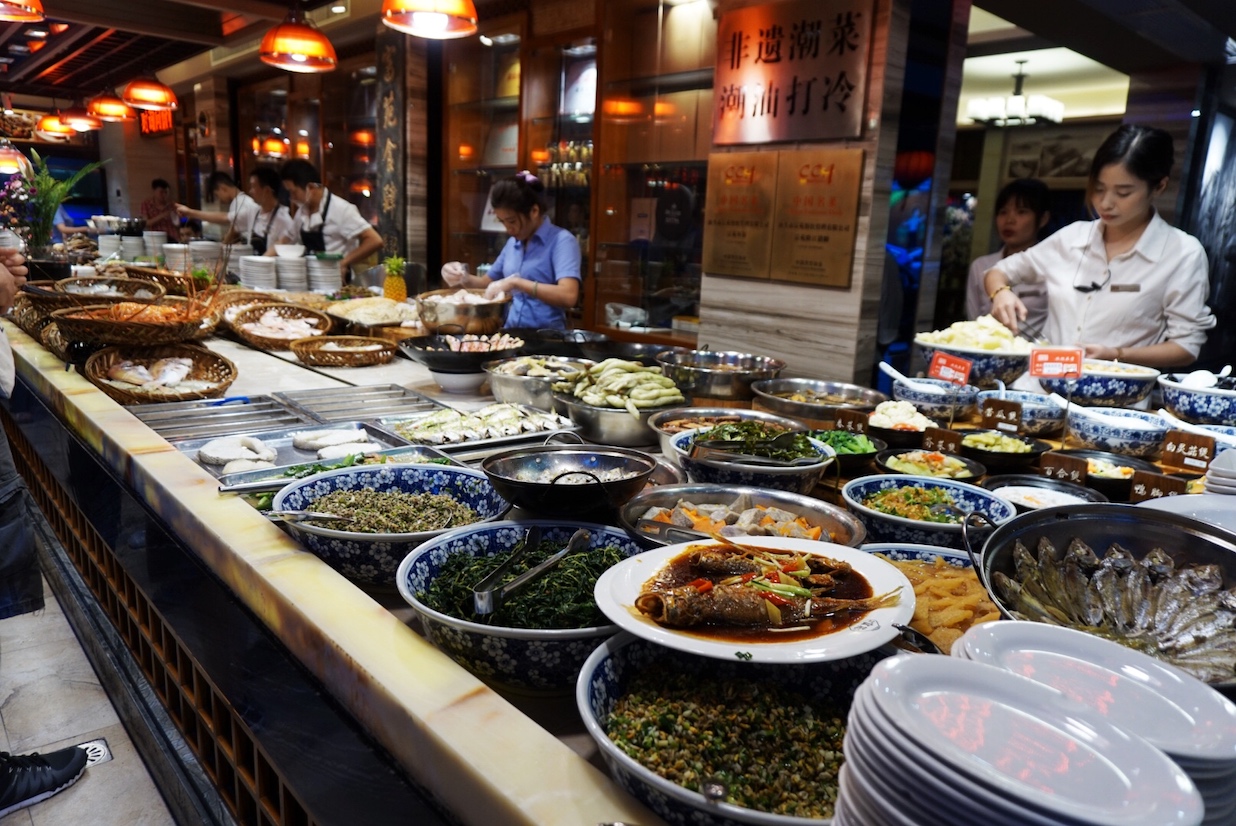 And that’s not even close to everything. There’s goose, oyster omelets, desserts, tea, late night food stalls that don’t even open until 9pm…” 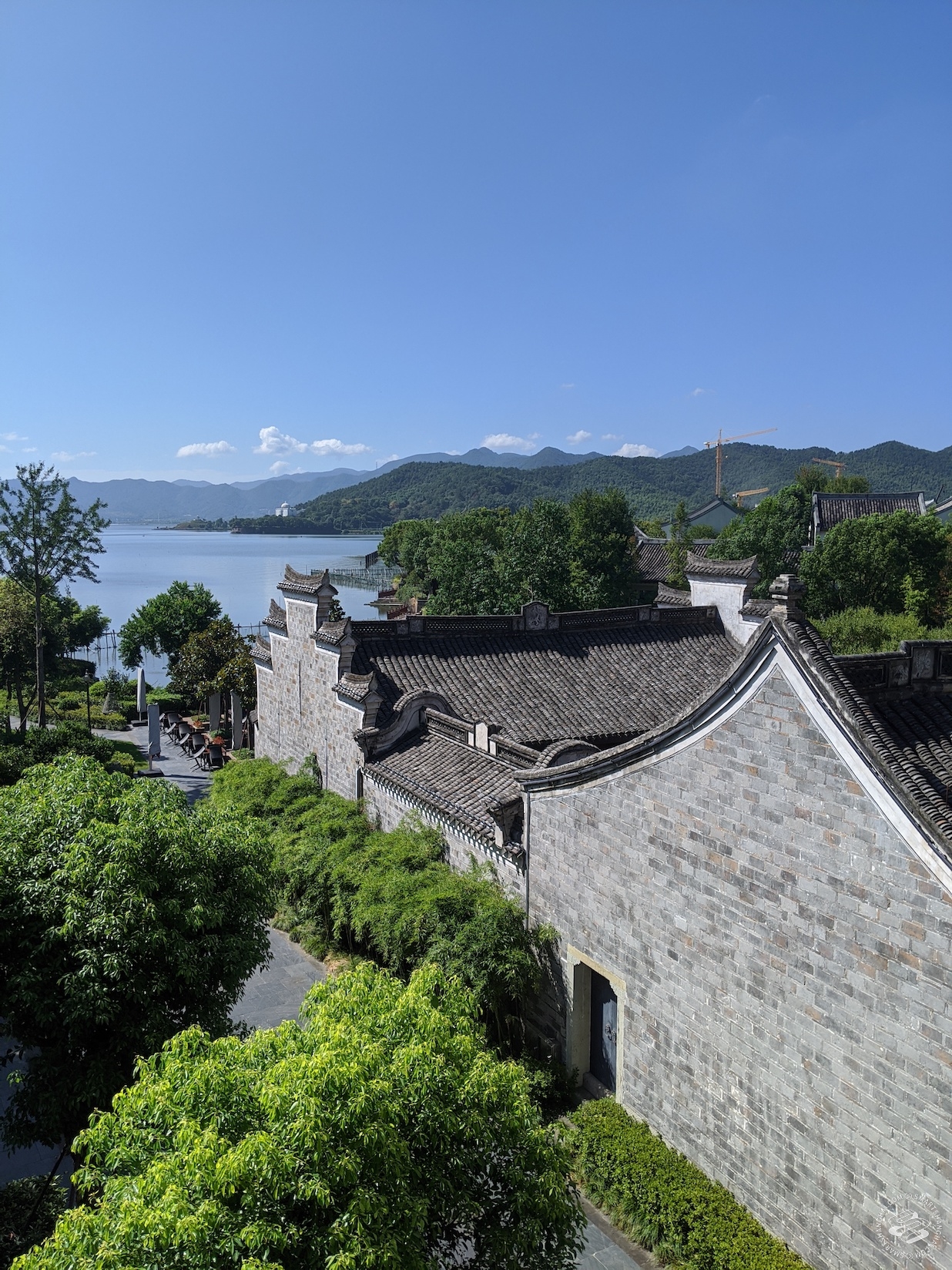 Morning on the lake from a Park Hyatt Lakeview Suite

The weekends I’ve not been in Suzhou this year, I’ve probably been in Ningbo. Not the downtown, mind you, which I have yet to embrace, but the resort area of Dongqian Lake. There are two excellent hotels out there (at least) that I keep returning to: the Hilton, which is more family-friendly, and the Park Hyatt Ningbo, which is more for a couples getaway. 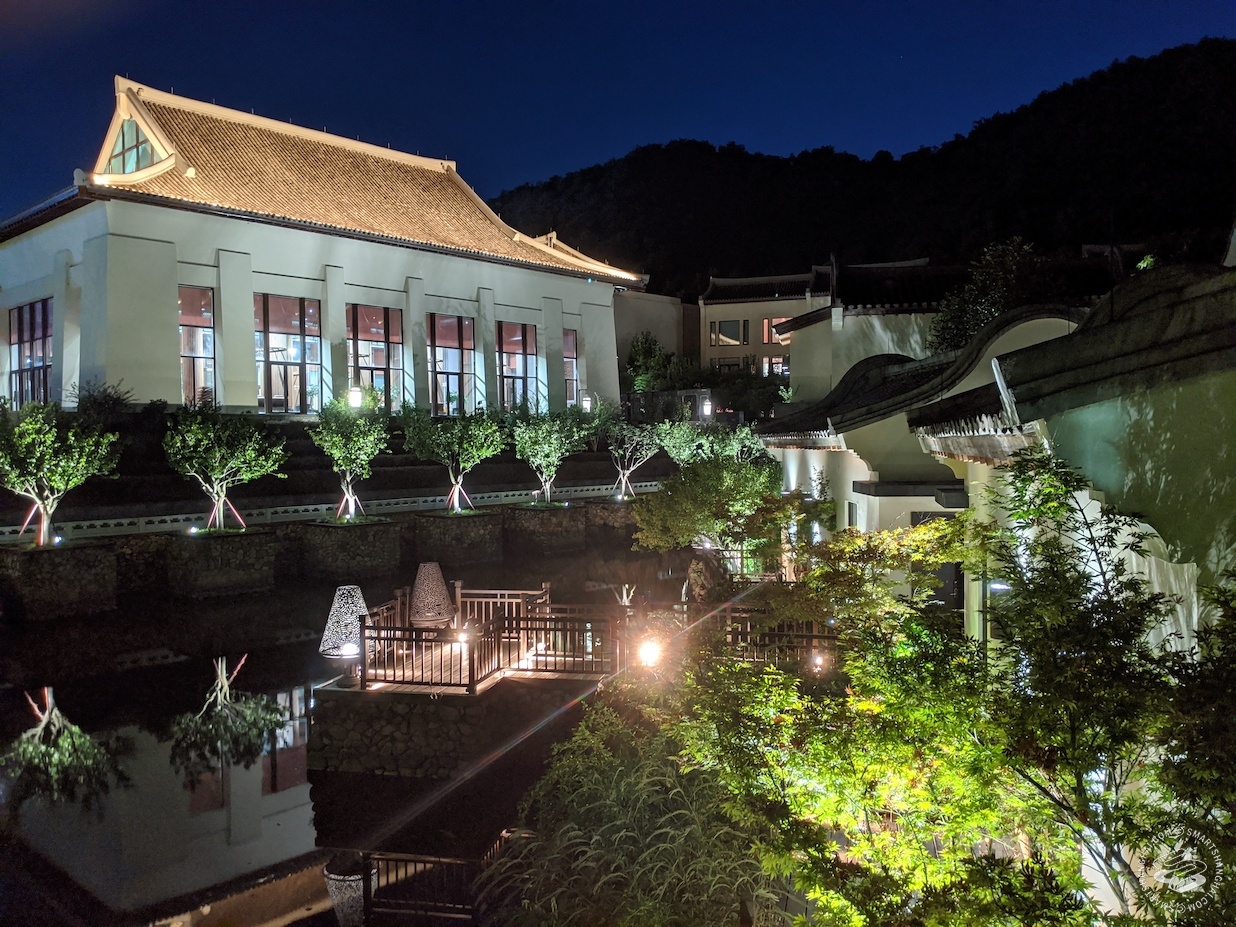 The Park Hyatt Ningbo at night

Both have excellent Chinese restaurants — the Park Hyatt’s Seafood House (钱湖渔港) is the best restaurant in all of Ningbo, according to Dianping, being the only one with two diamonds. I’ve eaten there three times now, and I agree. Fantastic place, as I’ve said before. Worth traveling for. But I’ve also branched out a little bit and went to the top of Fuquanshan (福泉山), a “mountain” that rises 500 meters above the lake and is covered in forest and tea terraces. From the very top, it’s possible to look down the slopes and see the container ships plying the muddy waters of the East China Sea. This is one mountain you don’t climb, per se; you stop in at the visitor center at its base, and get a ticket for the 20-minute shuttle that runs to the Dragon’s Pool, a small pond surrounded by tea bushes with a pretty lovely tea-house perfect for killing a few hours in beautiful surrounds. 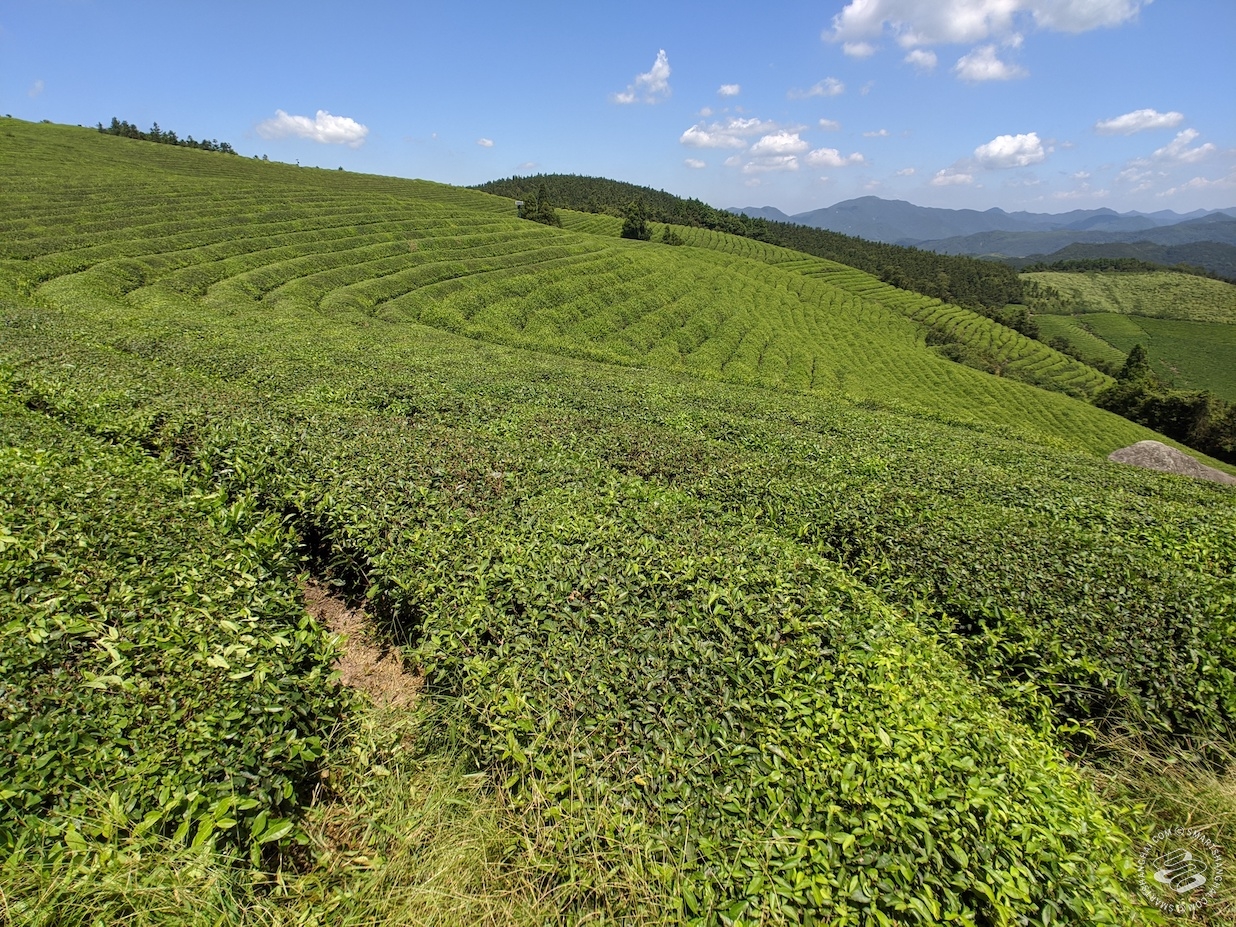 A tiny, tiny part of the tea terraces

Then there’s Xiao Putuo (小普陀), a causeway that juts out into the lake and ends with a statue of the Goddess of Mercy built over the water and a temple complex open to visitors. Again, the best part is a quiet tea-house right on the edge of the lake about halfway down the causeway where you might overpay for a cup of leaves but, in exchange, get a great perch to take in the scenery for a couple hours.

There are more than fifty trains a day from Shanghai to Ningbo. The fastest will get you there in 99 minutes. From the Ningbo station, it’s about 30 minutes and less than 100rmb in a Didi to the hotels on the lake. 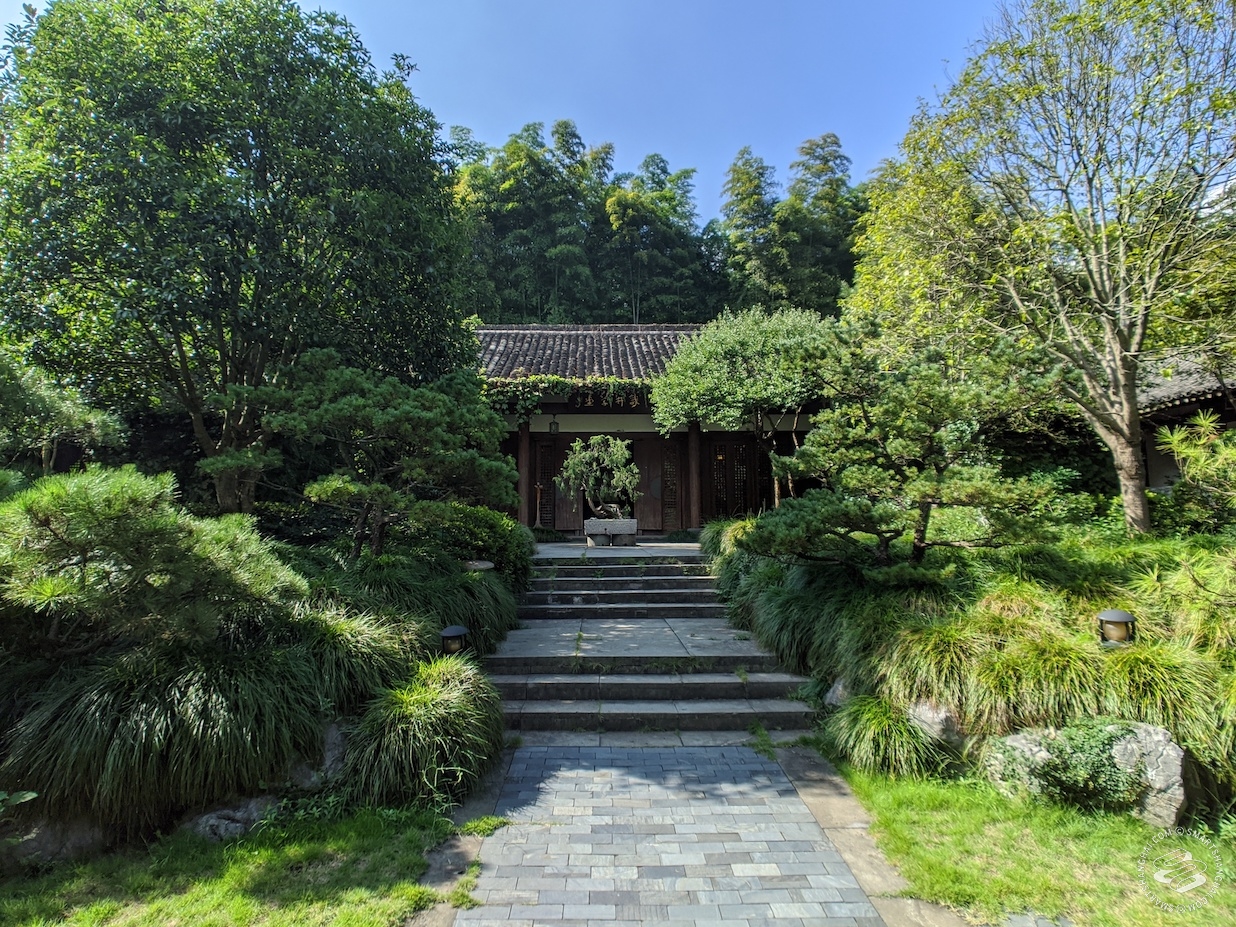 There’s a million things to do in Hangzhou — hey, you can go see one of only two Cirque du Soleil shows in the world that are still operating, we sell tickets — but Hangzhou is great for eating.

Dragon Well Manor, the famous garden restaurant in the Longjing tea fields, is absolutely fanatical about seasonality and sourcing. Since they opened in 2004, they have worked with more than 15,000 small-hold farmers; today, their current roster of suppliers stands at about 6,000. They have six full-time sourcing staff who spend their days buying small quantities of produce from farmers across Zhejiang and beyond. There is a guy whose whole job is to buy three-year old ducks for the restaurant’s famous steamed duck soup, which is made without water — the small quantity of “soup” is actually the condensed water vapor that forms after four hours of steaming. 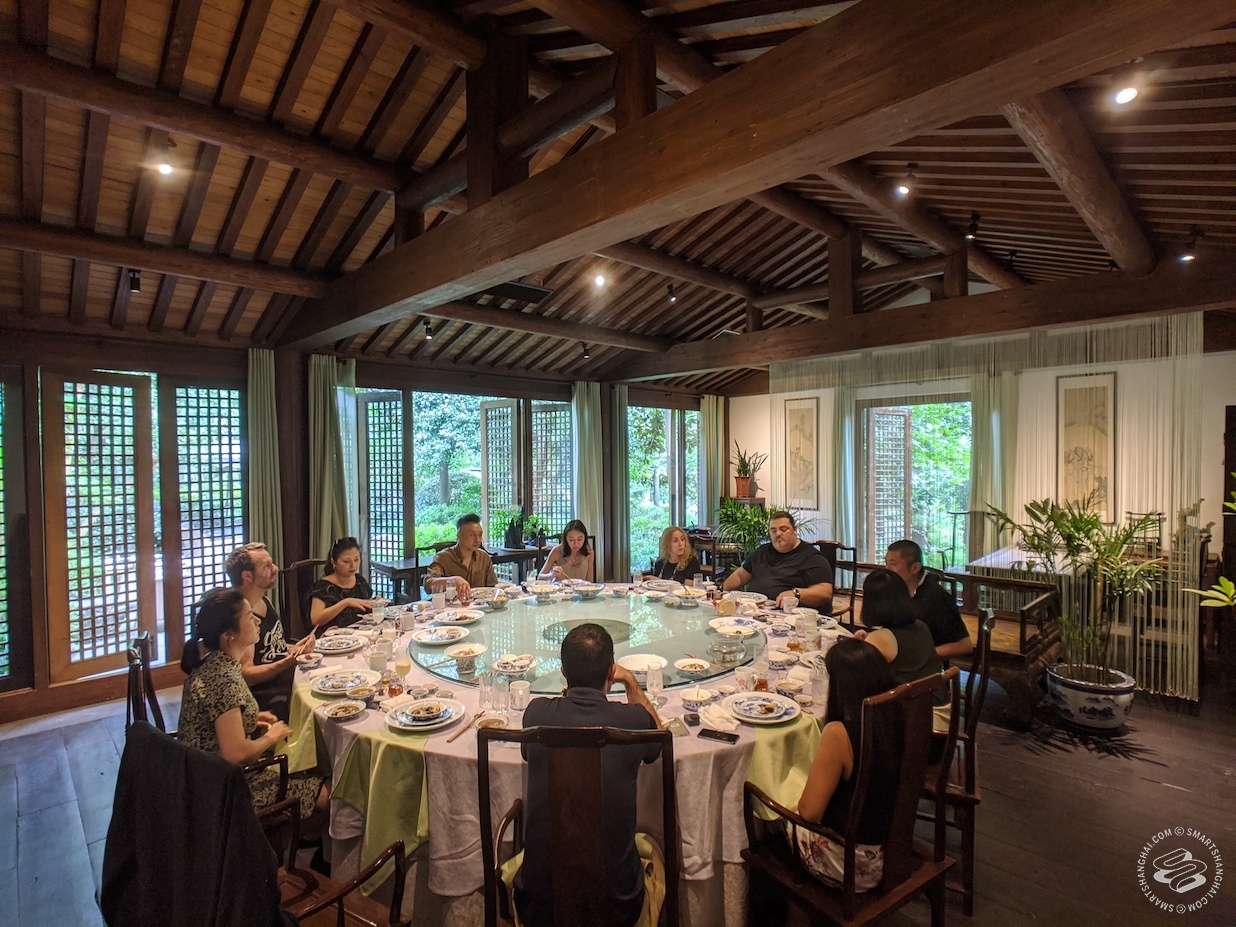 Shanghai chefs at lunch with A Dai

Food here is glorified countryside cooking. The owner A Dai says he doesn’t really care about presentation; he cares about the taste and sourcing behind his ingredients much more. Don’t expect fireworks or dry ice here. Instead, come for lunch when the garden is at its best in the sun, and be prepared for a lesson in eastern Chinese agriculture. 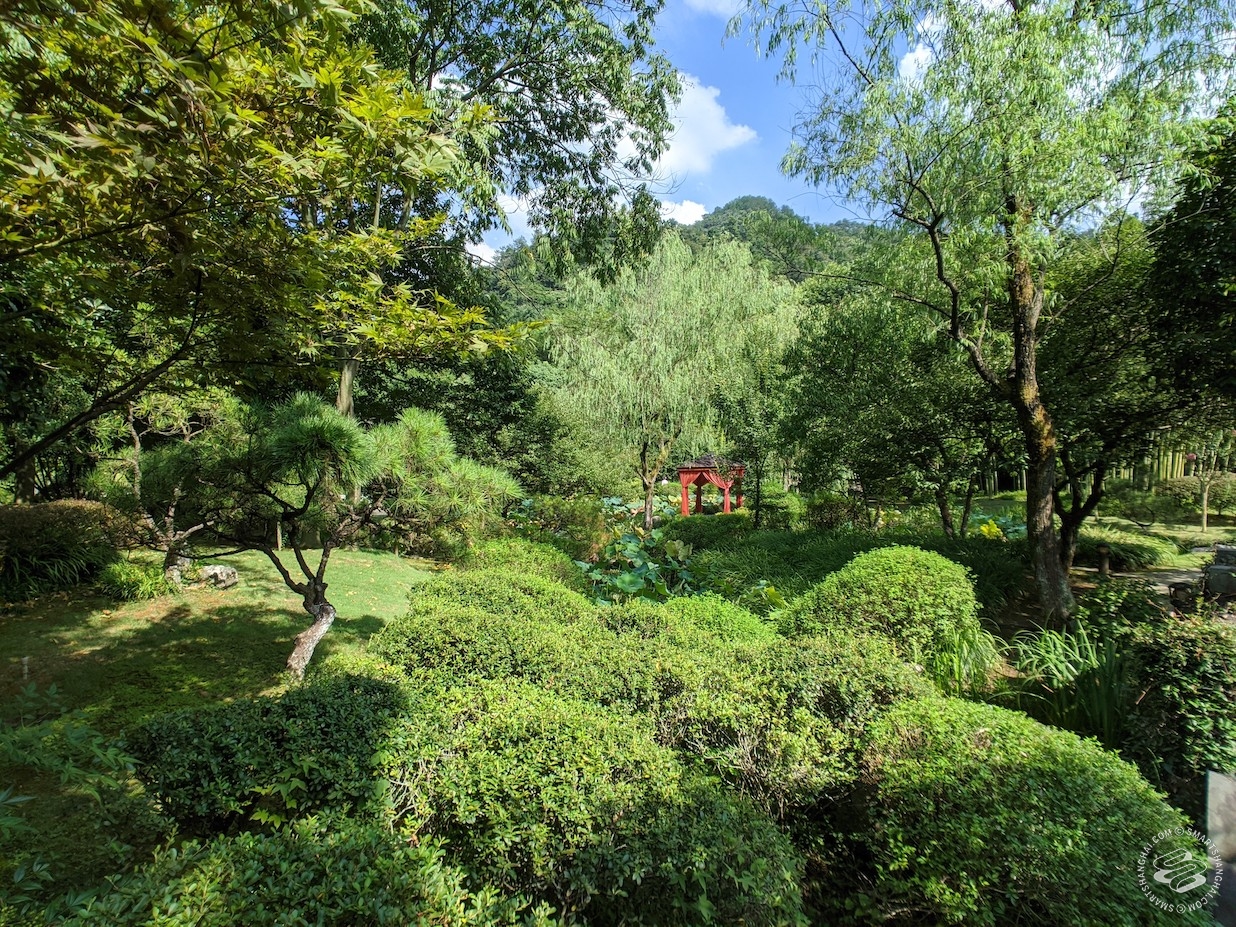 The gardens of Dragon Well Manor

The Hangzhou Four Seasons’ Jin Sha is almost the opposite. Here you'll find some Hangzhou and greater Jiangnan dishes but also things that have little to do with the region liked preserved blue lobster or a braised pork trotter with morel mushrooms (from their seasonal Yunnan mushroom menu). 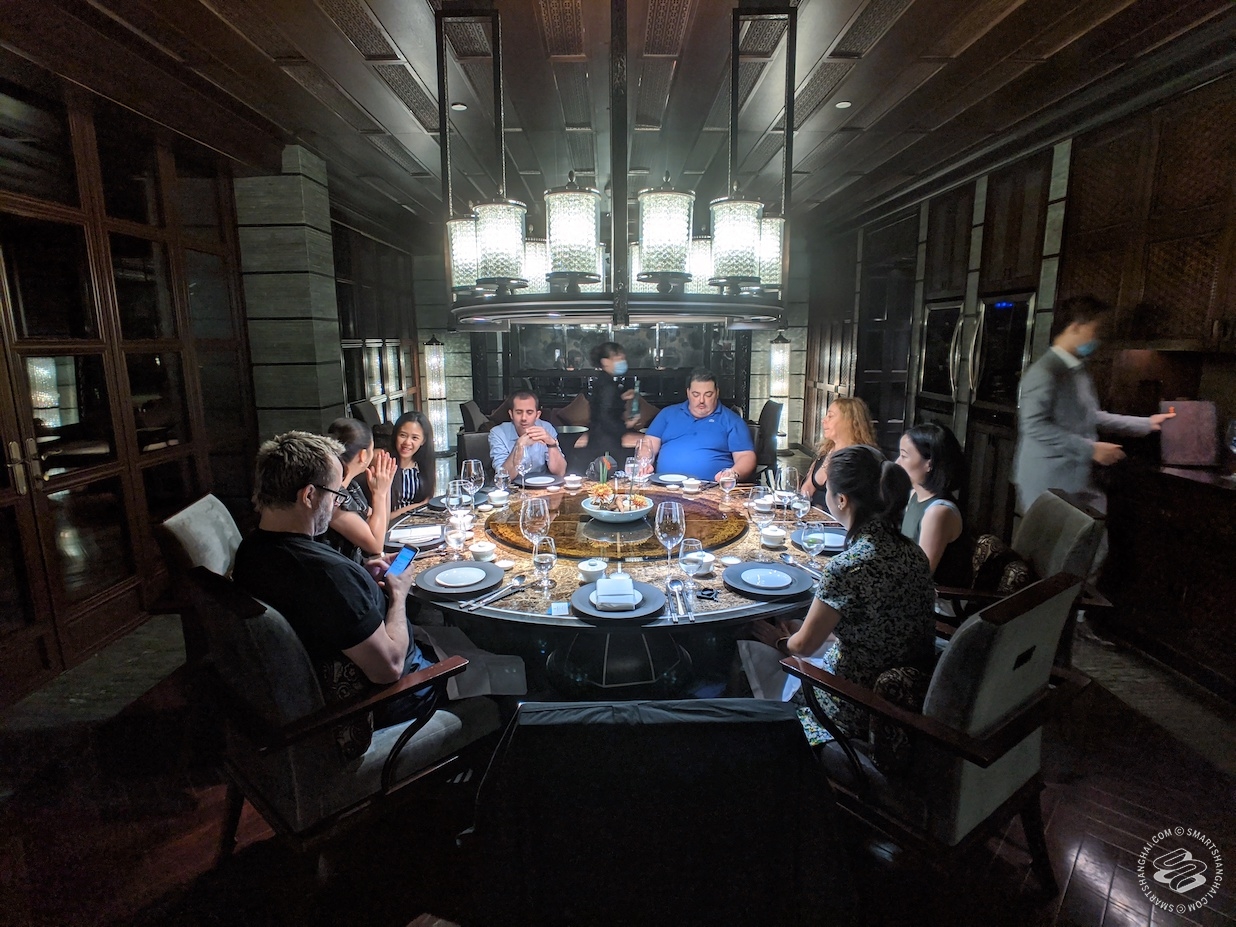 This restaurant is super popular among the foodie set, and chef Wang Yong seems poised to become a very well-known chef in Chinese food circles. There’s a lot of hype around him and around Jin Sha. If you are into Chinese fine dining and don’t mind spending 1,000rmb or more to indulge that hobby, maybe use the October holiday to cross Jin Sha off your list.

There are almost 200 trains a day from Shanghai to Hangzhou, with some of them doing the trip in just 45 minutes. If you’re going directly to lunch or dinner, a nice Didi from the train station to Dragon Well Manor will cost about 80rmb and take 45 minutes; for Jin Sha, expect about 70rmb and 40 minutes.