Shanghai Has Hundreds of Vegetarian Restaurants But Only One Like This

After a shaky start several years ago, Fu He Hui has really hit its stride.
By Christopher St Cavish - Photos: Brandon McGhee Aug 3, 2020 2020-08-03 Dining
The mushroom soil turned me off. It was a trend back in 2015 in the global fine dining world to make crumbled black or dark brown food and call it “soil”. At Fu He Hui, back in those far-off days, chef Tony Lu took it one step further by “planting” dried, candied mushrooms in the soil and calling it dessert. It looked like a dead houseplant, withered and decaying. Tasted like one too.

It represented, to me, a lack of creativity (just borrowing a global fine dining trend, which was a bit stale, even then) and a lapse in the chef’s judgement (fibrous, candied shrooms), and it left a strong impression. I can’t remember any of the other eight courses from my meal five years ago but the memory of the sweet, dried mushrooms was enough to keep me from going back for years, even after the restaurant won a Michelin star in 2017. 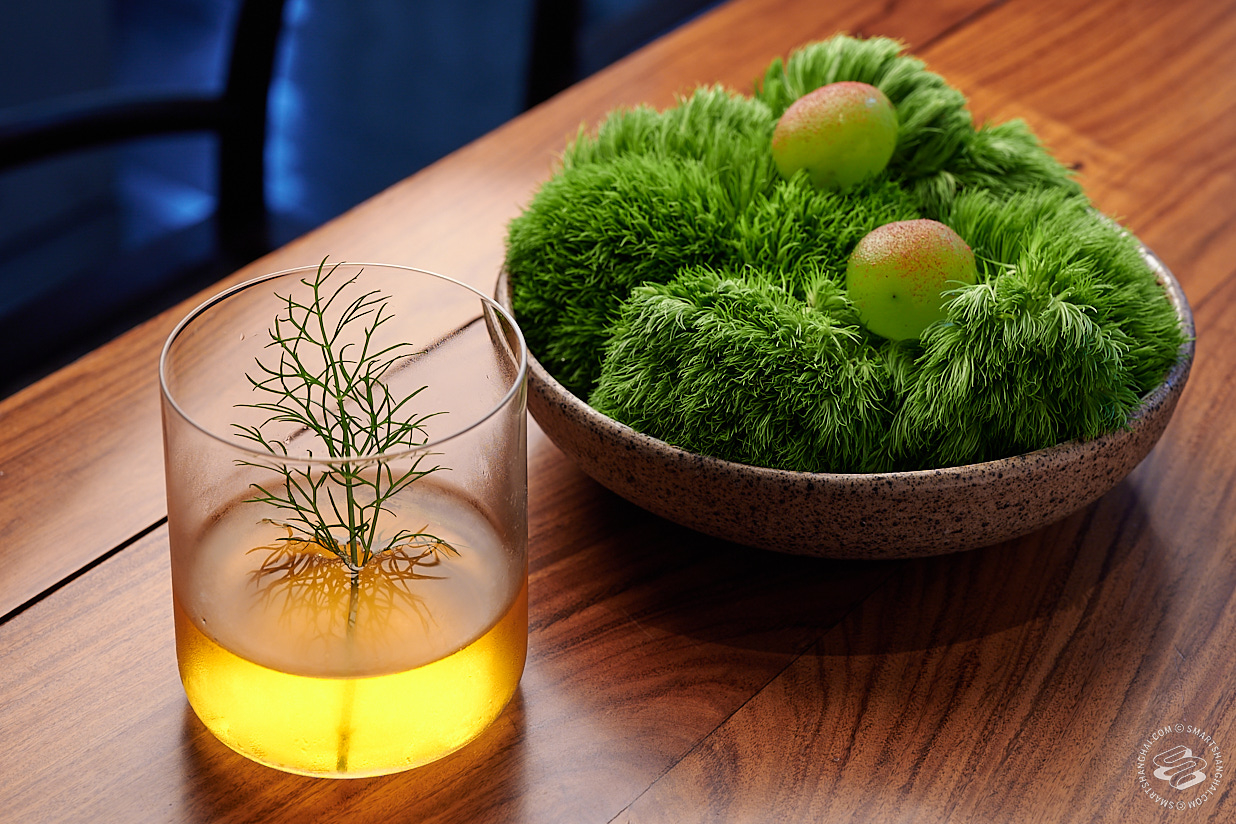 That was my mistake. In the intervening years, Fu He Hui has re-invested their energy and made significant improvements across the board. The restaurant started as a passion project by Fang Yuan, the owner of the Fu family of Shanghainese villa restaurants. Fang was a Buddhist who couldn’t find vegetarian food that wasn’t closely associated with religion and temple cooking, and wanted to create a place that would offer a pure vegetarian experience, light on the Buddhist overtones and apart from the mock-meat school of cooking. (Read about how this played out in the interior design here.) 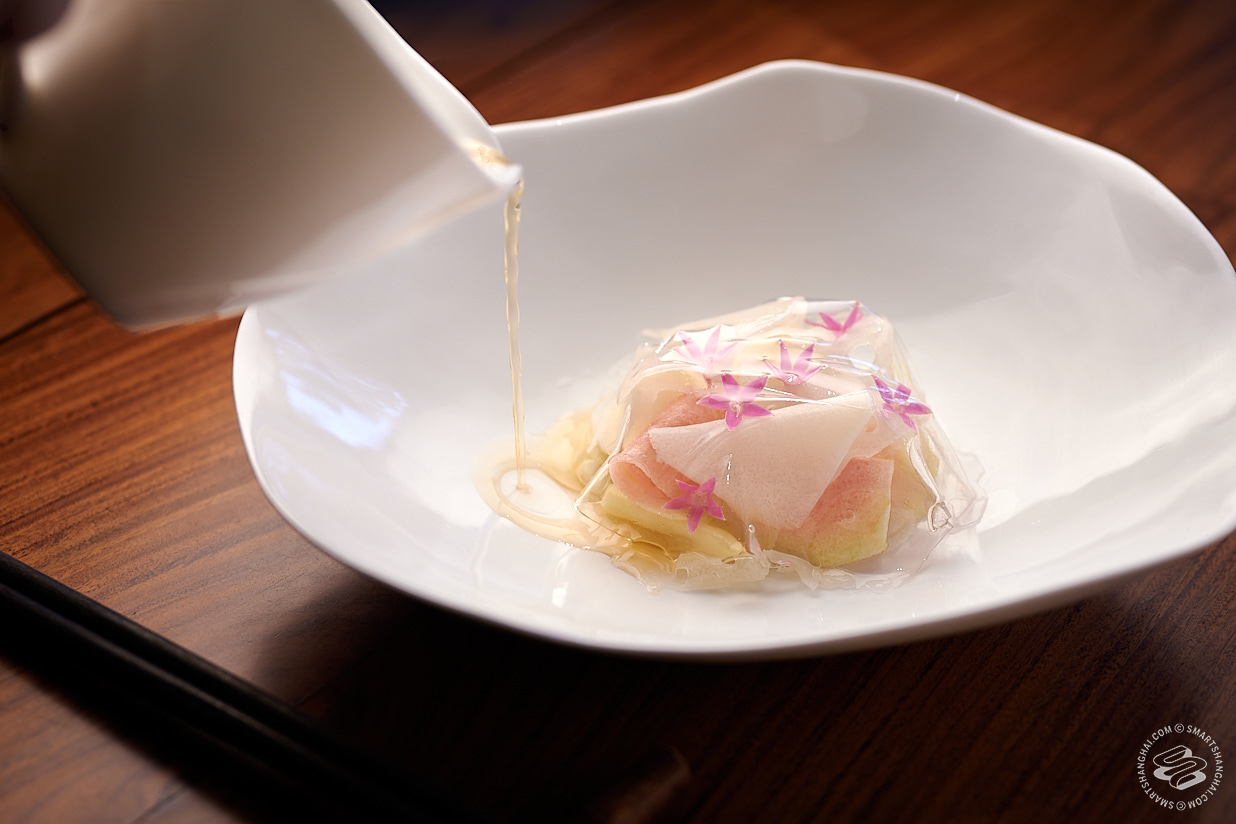 A visiting journalist wanted to try it last fall and invited me; I wanted to give it another chance. What I found was a newly invigorated kitchen, no longer copying the clichés of western fine dining, cooking extraordinary, seasonal food that felt both new and distinctly Chinese. I resolved to come back in summer, when the menu would change dramatically.

Last week, that is exactly what I did. The restaurant had just introduced the summer menu and so on a weekday night, I went anonymously with a friend for dinner. (The pictures were taken during a separate photo shoot so the restaurant wouldn’t try to do anything special for me.) 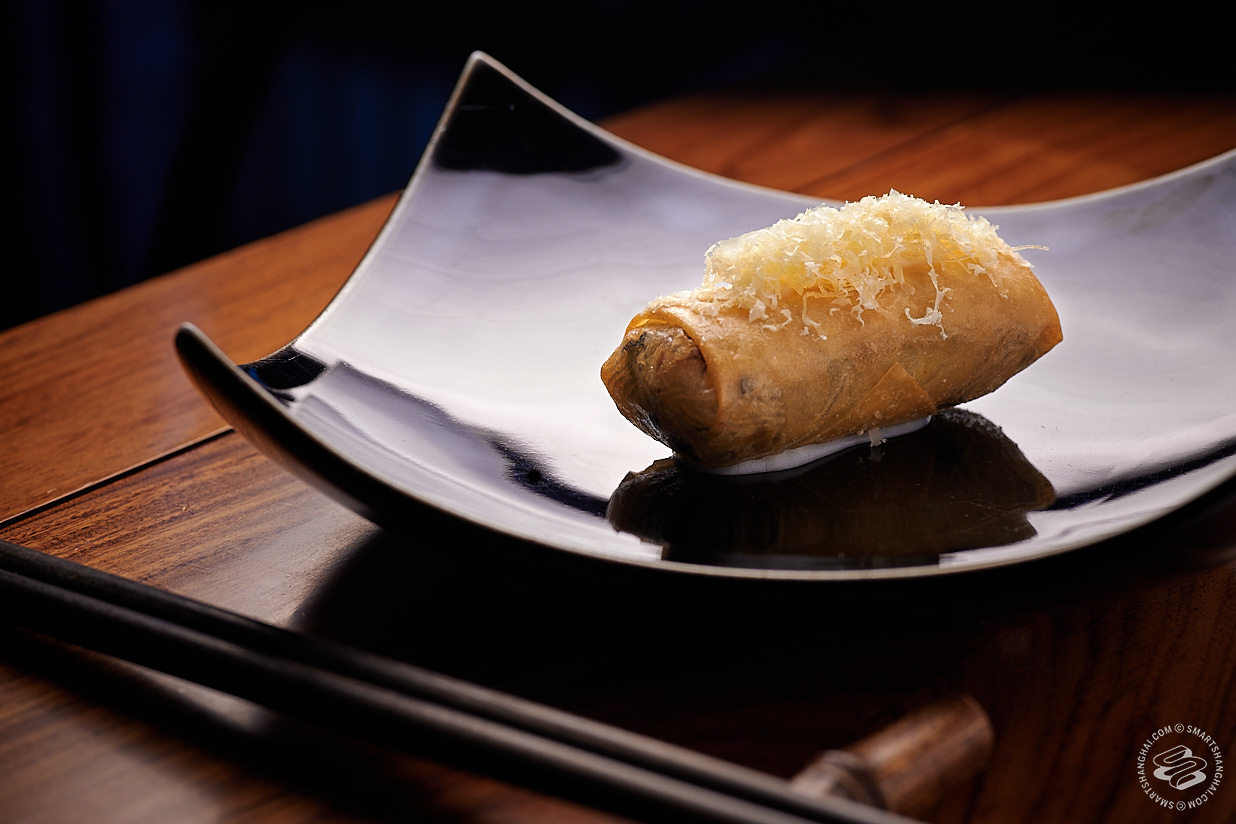 Again, I found a combination of meticulous sourcing (nearly every course is introduced by describing the produce, why it’s special and where it’s from); accomplished kitchen technique; the occasional high concept (a dish of morel mushrooms meant to evoke the karst landscape of Guilin); and a gorgeous tea pairing, which they introduced a few years back, I’m told, and has become one of their signatures. 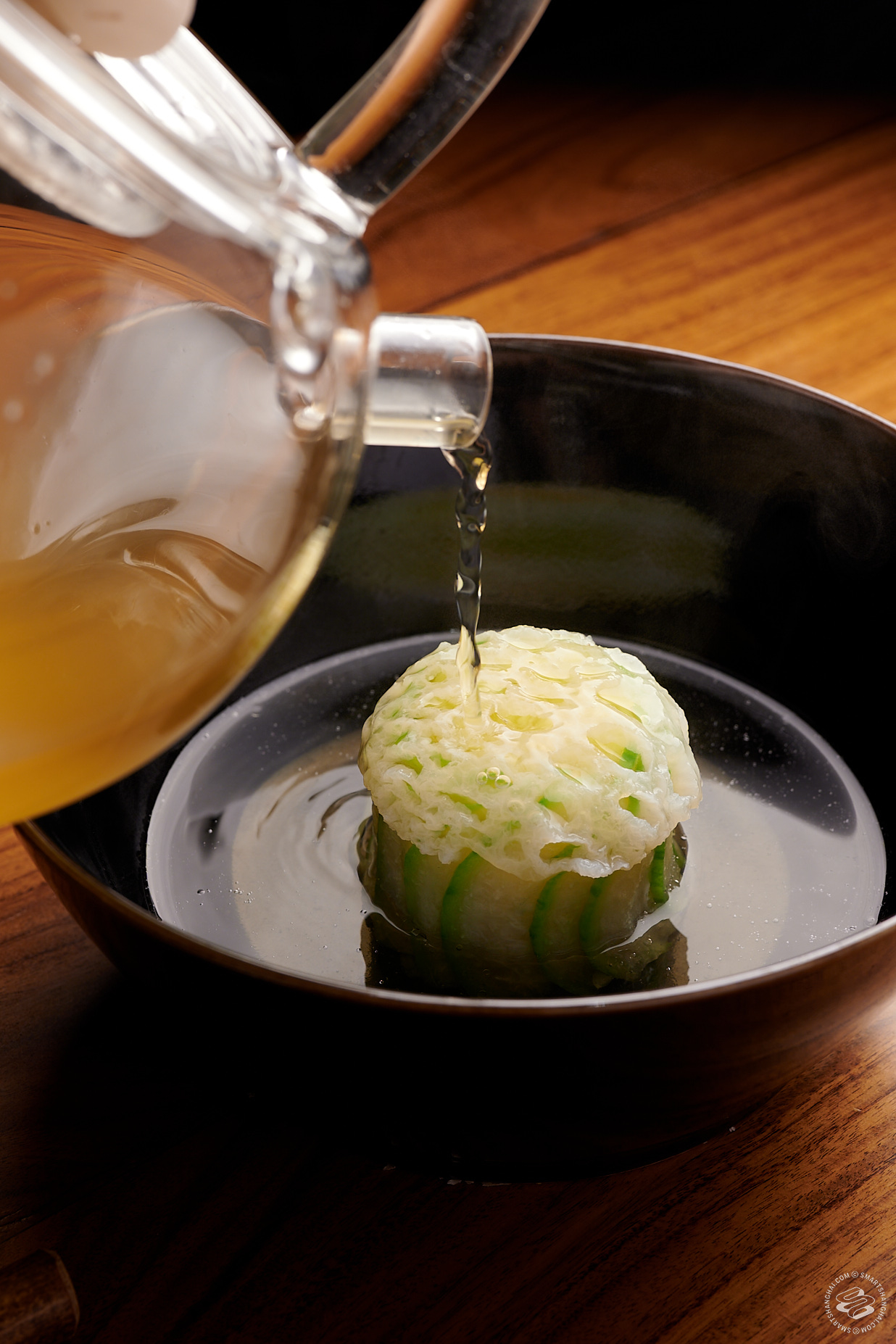 The menu is light — super light — feather light — in flavor and feel; there is little to really sink your teeth into, apart from a lychee that’s been fried and glazed and smacks of a big, meaty morsel of sweet-and-sour pork, until you get to the end. 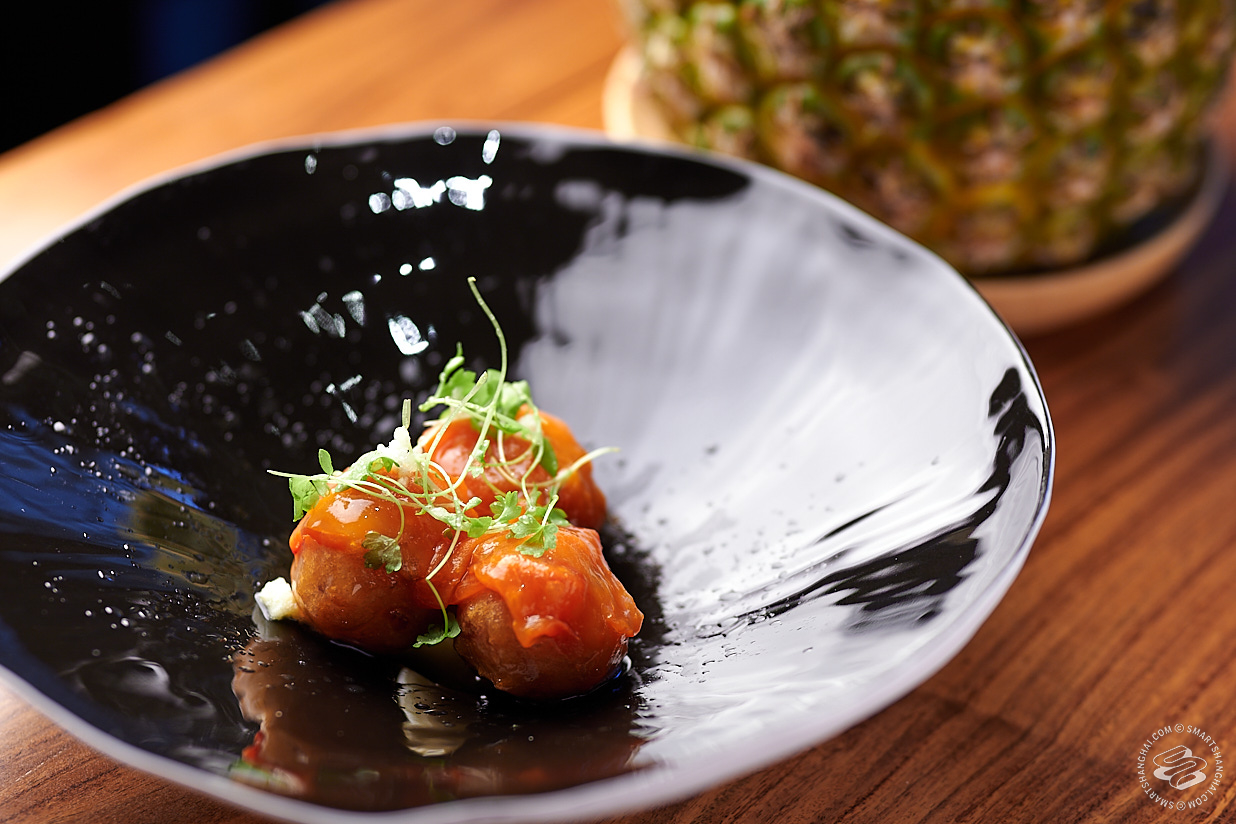 That’s when the staff offers a couple off-menu items to help, I think, fill you up, in a kind of nice admission that, hey, everything has been beautiful and delicate and dainty before, but now would you like some food? 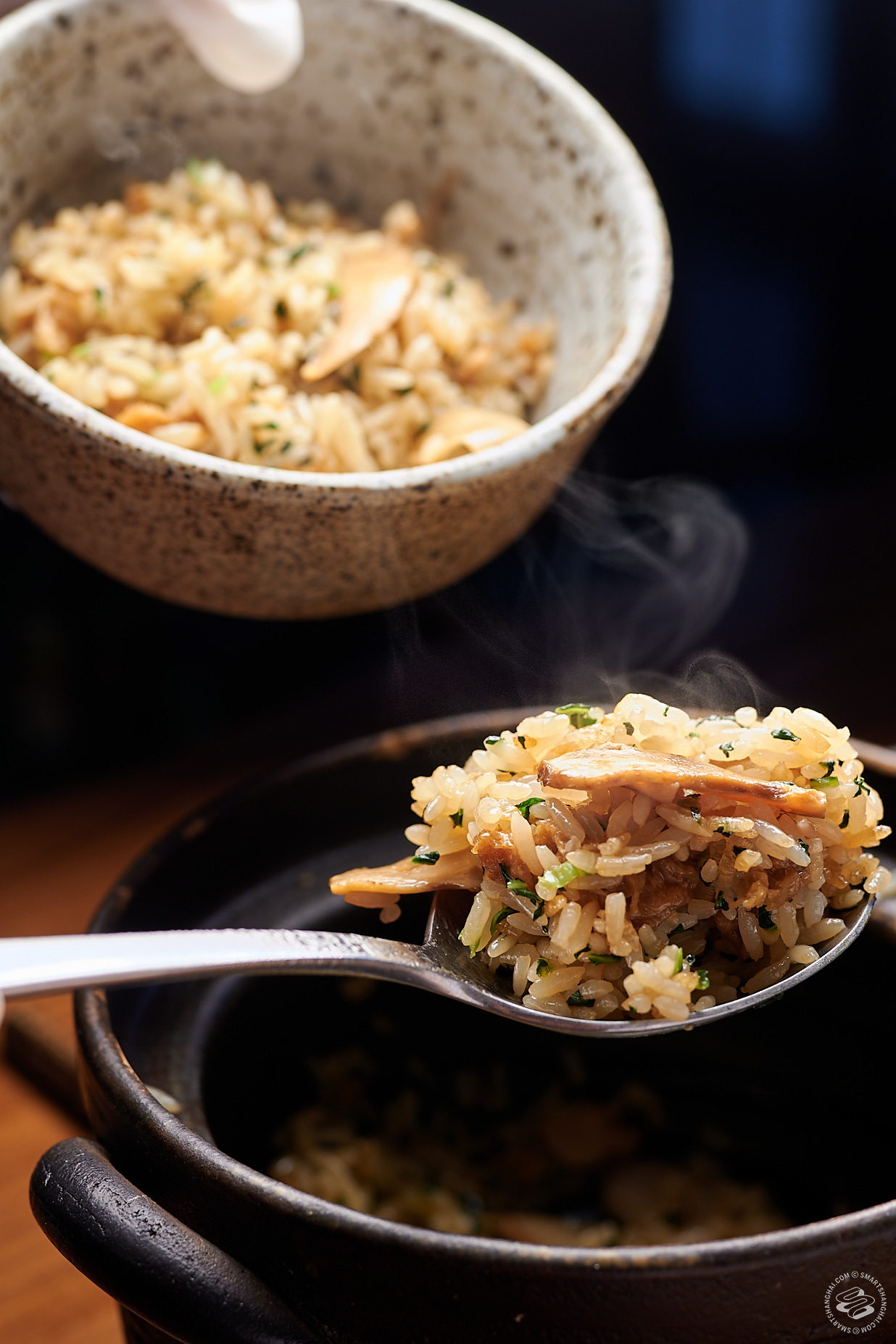 I went for the mapo tofu, an additional 188rmb, made rich with big chunks of Yunnan porcini and matsutake mushrooms, with a crunchy stone-pot rice full of even more mushrooms. Silky, spicy, meaty-without-meat — it was fantastic.

There are a few caveats. 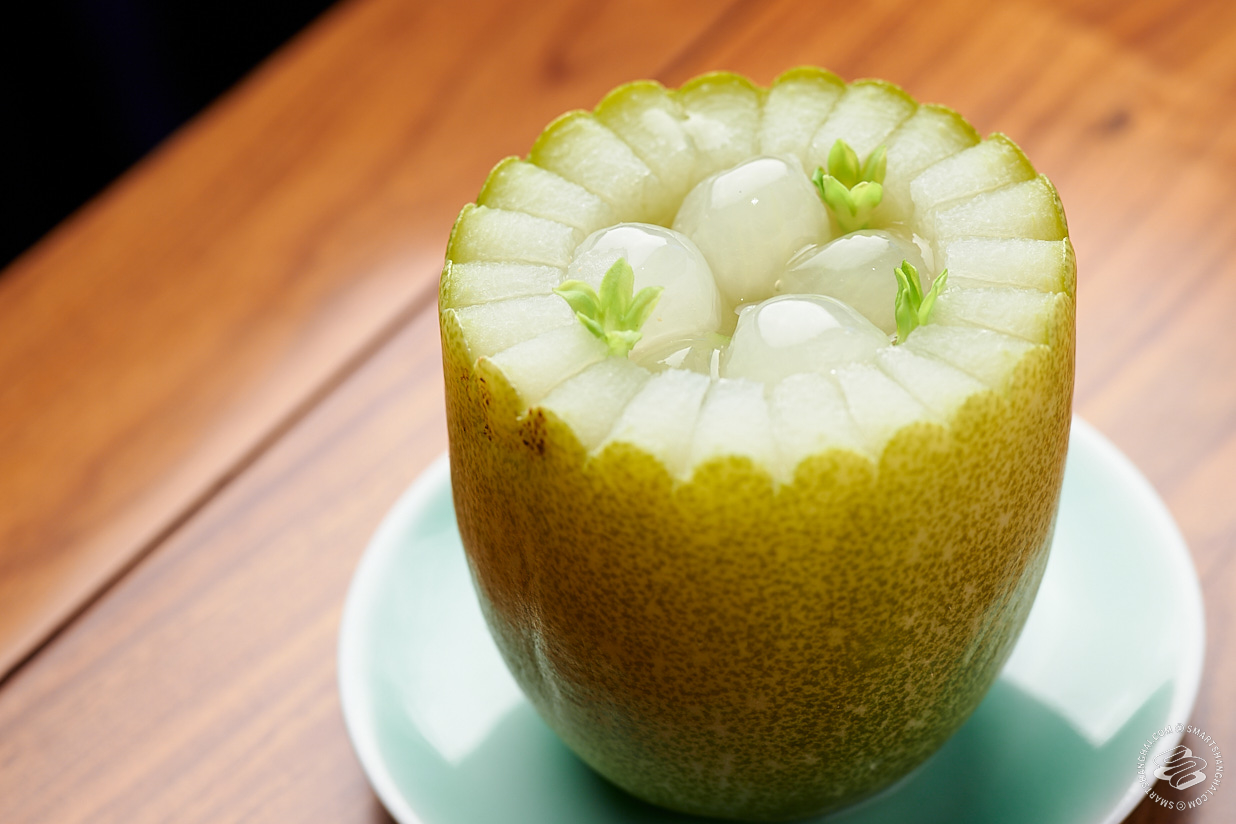 We did the whole thing in Chinese — my friend is a native speaker, and I’m not bad with esoteric food vocabulary — and even then many of the explanations left us stumped. If you don’t know that ganbajun is a highly prized and very expensive type of mushroom in Yunnan that is rarely appreciated out of the province, and has a strong, earthy taste, for example, the spring roll filled with glass noodles and chopped ganbajun will still be delicious but you’ll be missing a key component of why this is on the summer menu and what you’re meant to appreciate about it — ganbajun is a summer mushroom. 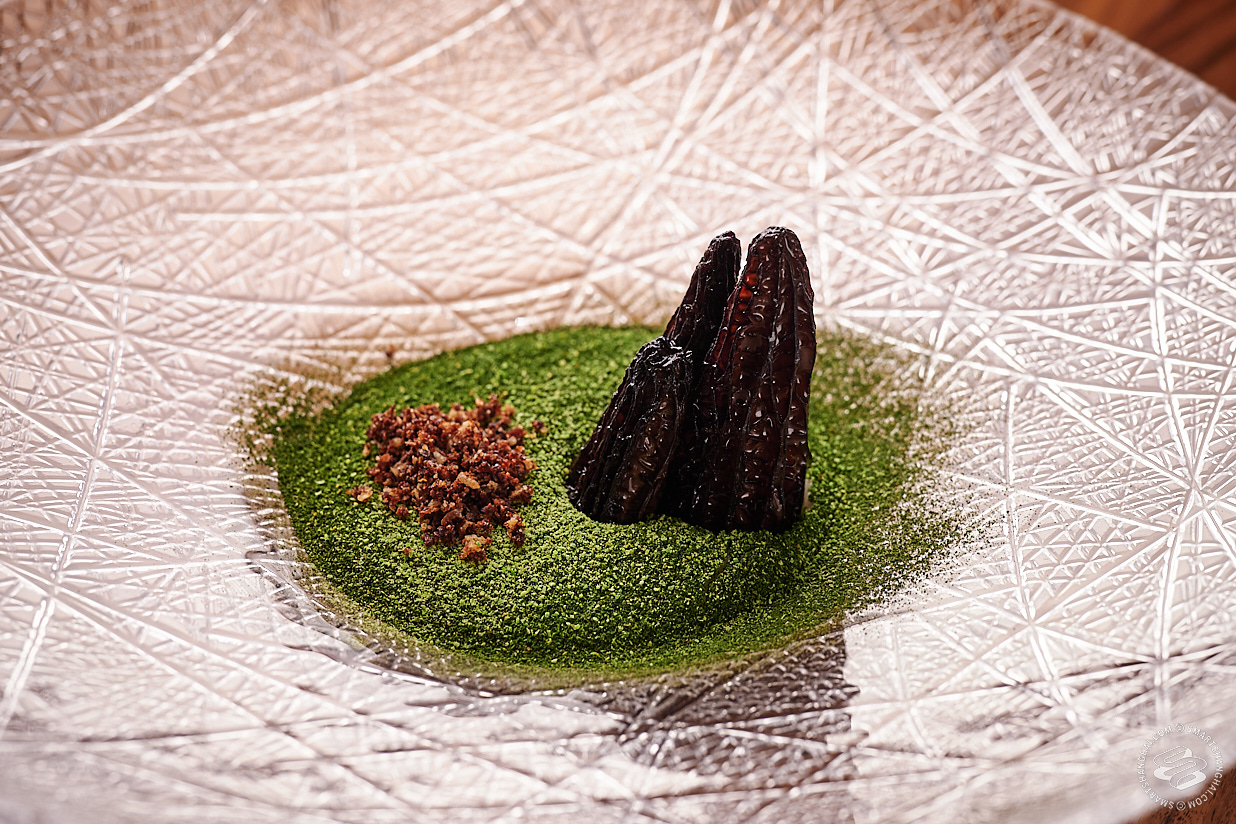 I’m not sure there is anything to be done about this, except to keep asking the servers, who are very knowledgeable, for more explanation. How this might go in English, I have no idea. It’s already difficult to explain and understand in Chinese — I can’t imagine it’s going to be any easier through translation. The menu does provide names of many ingredients but little in the way of context or explanation. 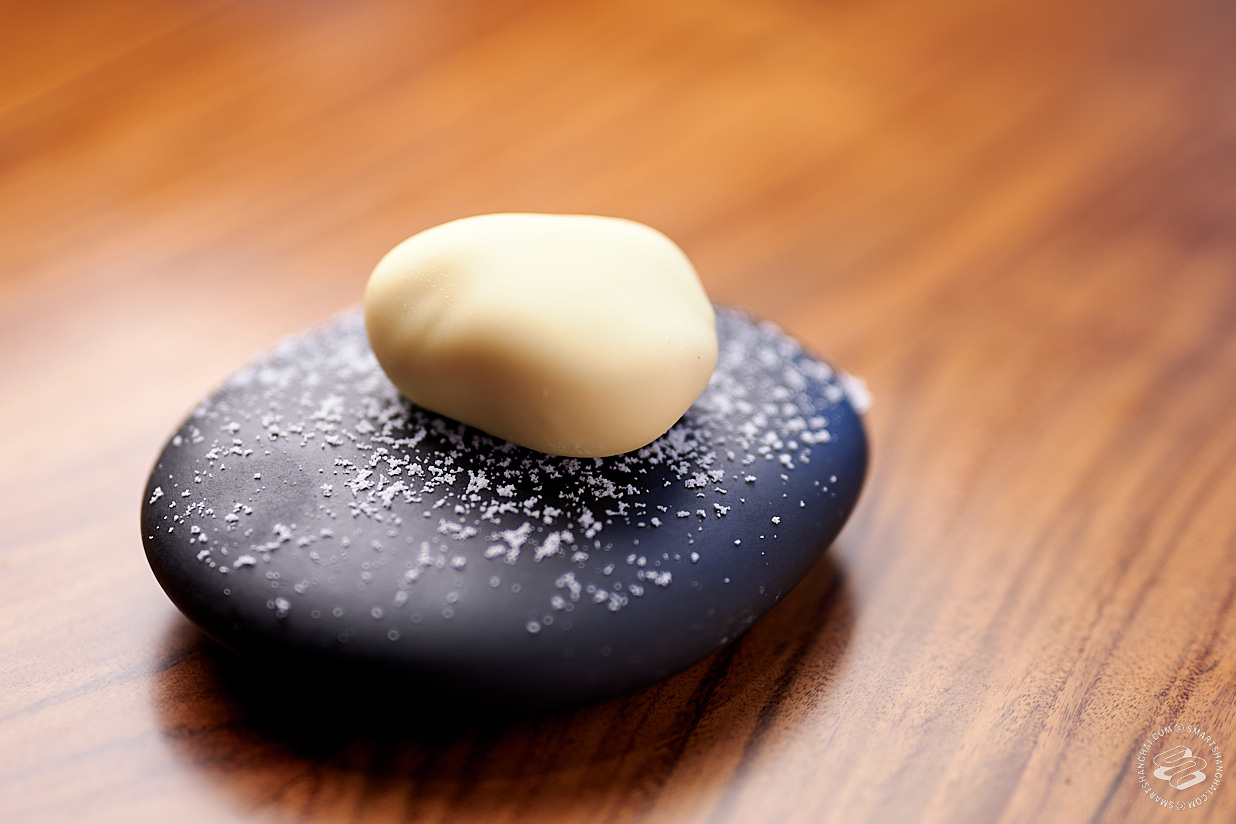 The tea pairing is 288rmb and it’s a must. It doesn’t come with every course, but it’s worth it alone for the drama and beauty of the fresh lotus flower whose upright leaves fall one by one, like choreography. It is, to me, indescribably beautiful, peaceful and poetic. 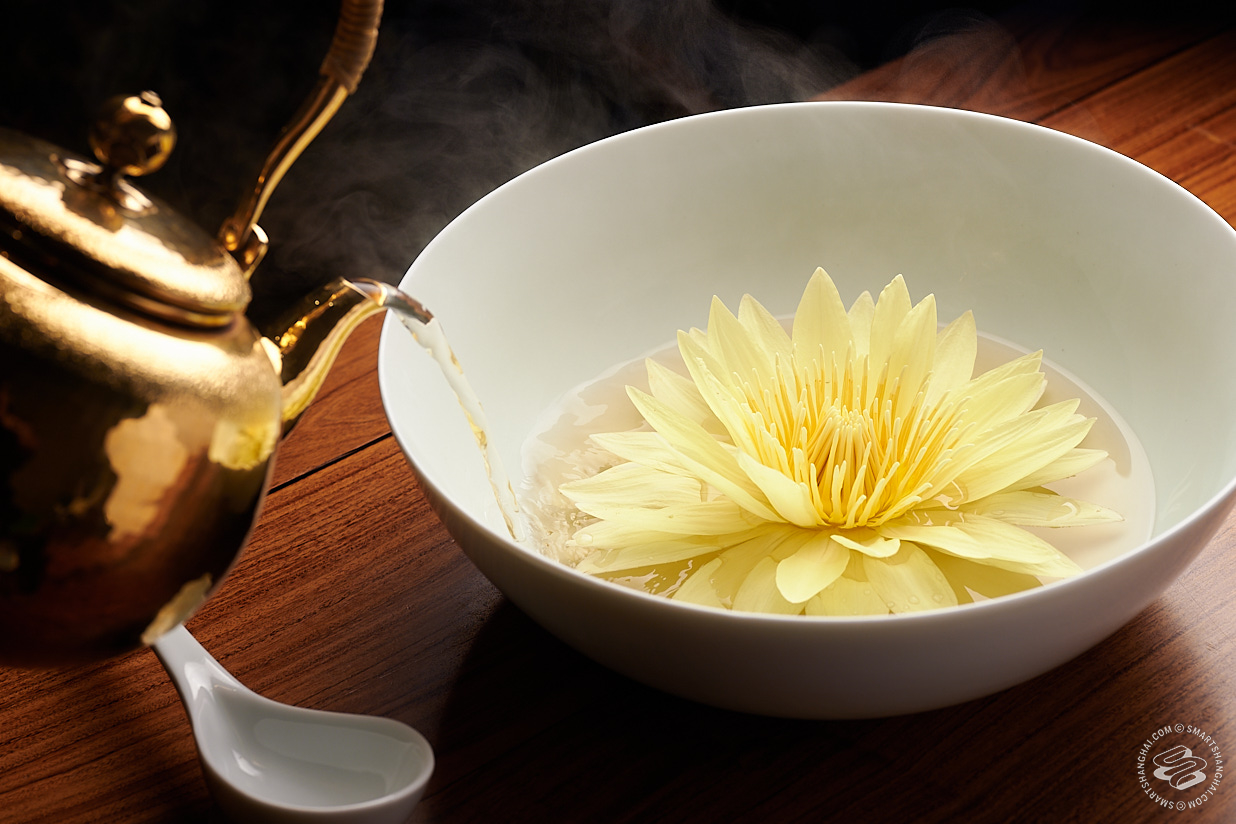 If you’re okay with light flavors, you will enjoy Fu He Hui’s summer menu. It is delicate. It is quiet. The flavors are whispers. If you go expecting big, bold flavors, you will be disappointed. Set your expectations appropriately. 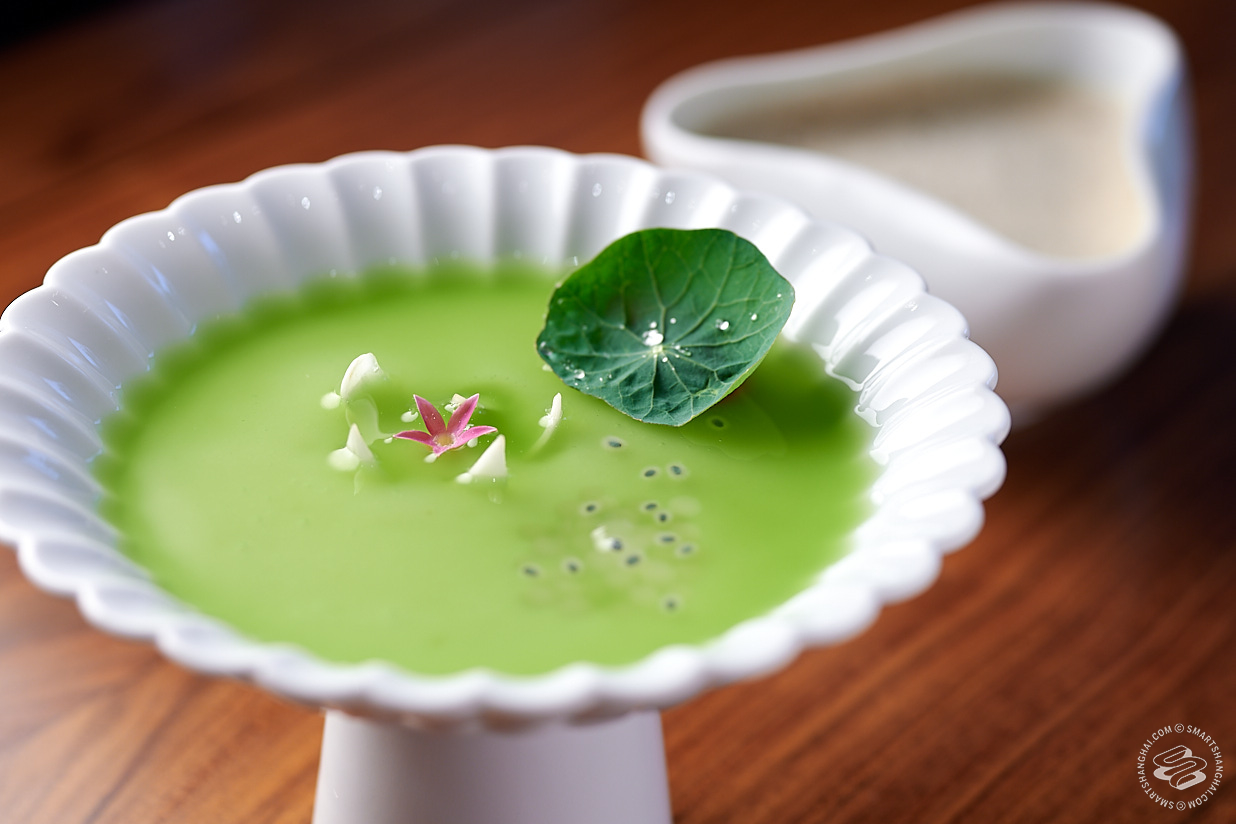 The tasting menu is 888rmb, though there is no service fee or additional tax. This seemed high to me until I realized that was the same price I paid back in 2015; it has not gone up since the restaurant opened. 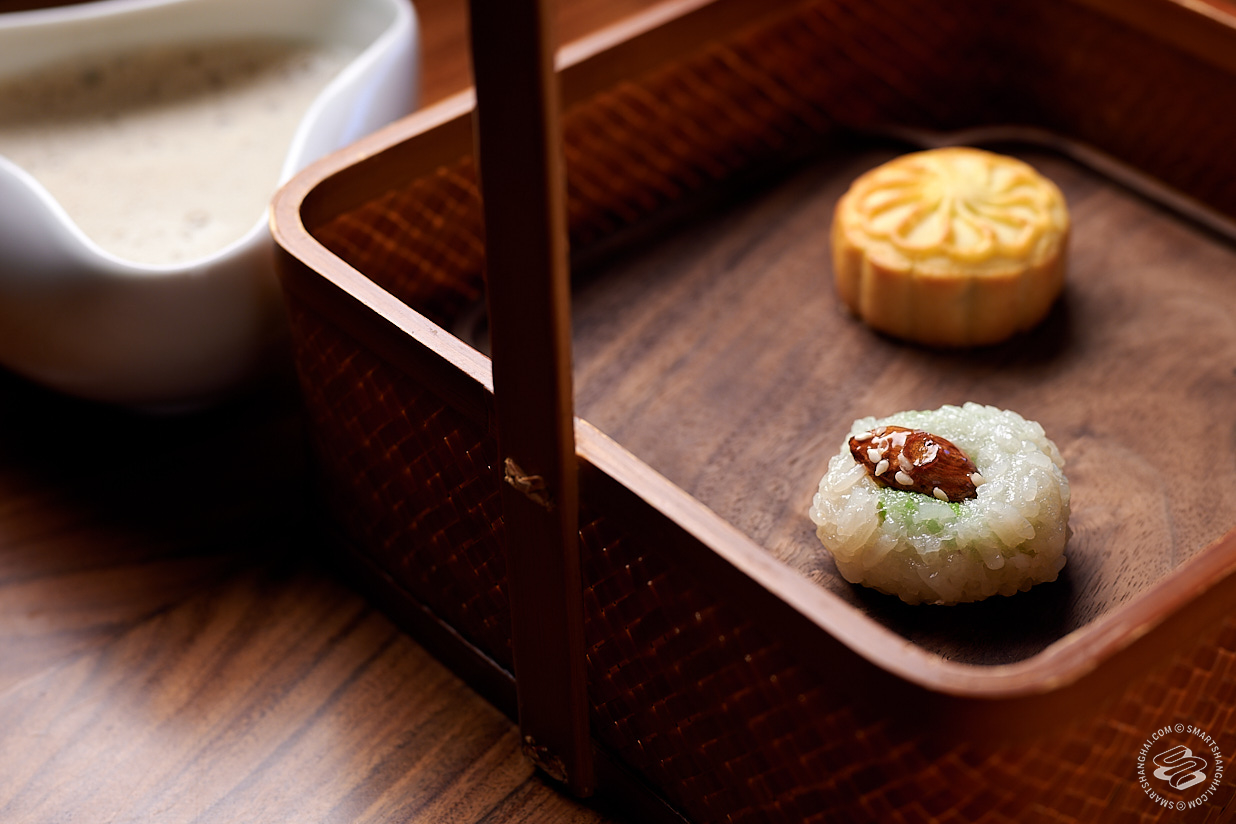 I’d consider myself a convert after my last two meals. What chef Tony Lu and his team at the restaurant have achieved is a singular experience, a cohesive and unique approach to vegetarian cooking that exploits some of the best regional produce China has to offer (and it has a lot). It makes sense. It makes you think a bit. And it’s delicious.

***
Browse all vegetarian and vegan restaurants in Shanghai here