[On the Radar] Oriental Springs

Oriental Spring is Shanghai's first "hot springs" that doesn't require you to travel hours outside of town.
By Beth Roulston
2020-11-06 12:00:00
Photos: Angela Leung
On The Radar: On the Radar is a SmartShanghai column profiling new restaurants, bars, and other new places you might like to know about. Sometimes we stumble across these venues and sometimes... we are invited. As such, these are our first impressions and not a formal review. 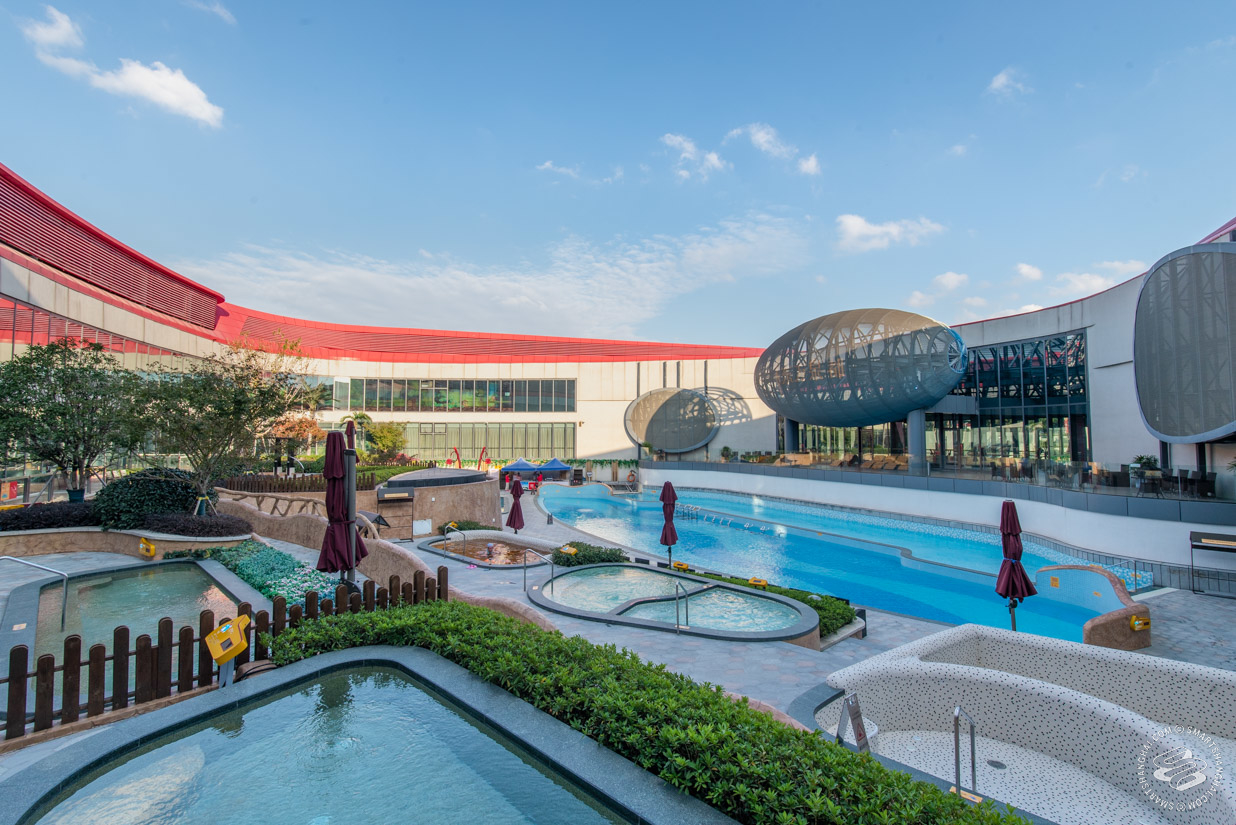 What it is: Around a decade ago, a group of investors were planning to build a golf course in Jiangsu. They started construction but were halted by water. Hot water. Hot water that wouldn’t stop flowing. A natural hot spring.

They considered building a spa and resort on the site but decided Shanghai would be a better location, so they looked around for a while for a suitable facility and found… a defunct luxury car exhibition center for luxury cars on Wuzhong Lu. Done! 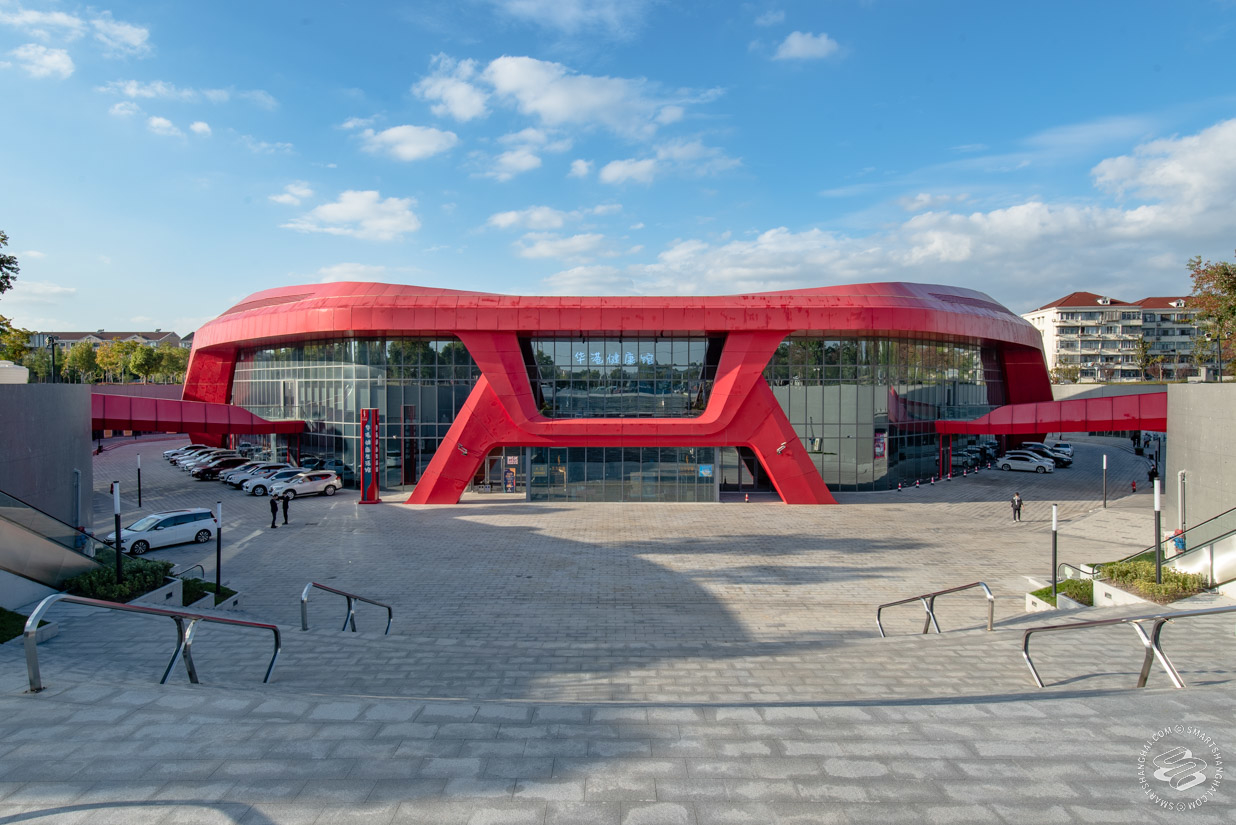 Fast-forward to winter 2019 and the 15,000 square meter Oriental Spring sporting 15 different heated (and chilled) pools opened for business and then closed (COVID). It re-opened in early summer of 2020. 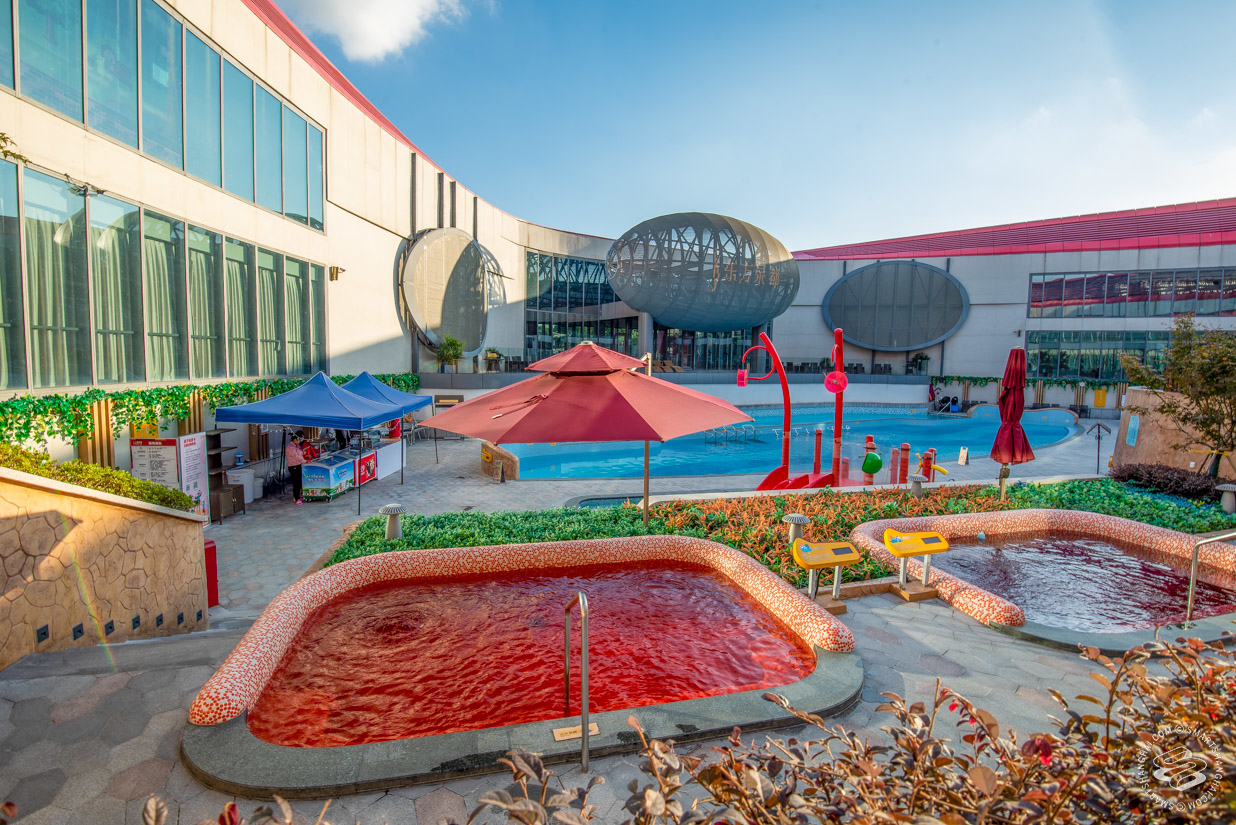 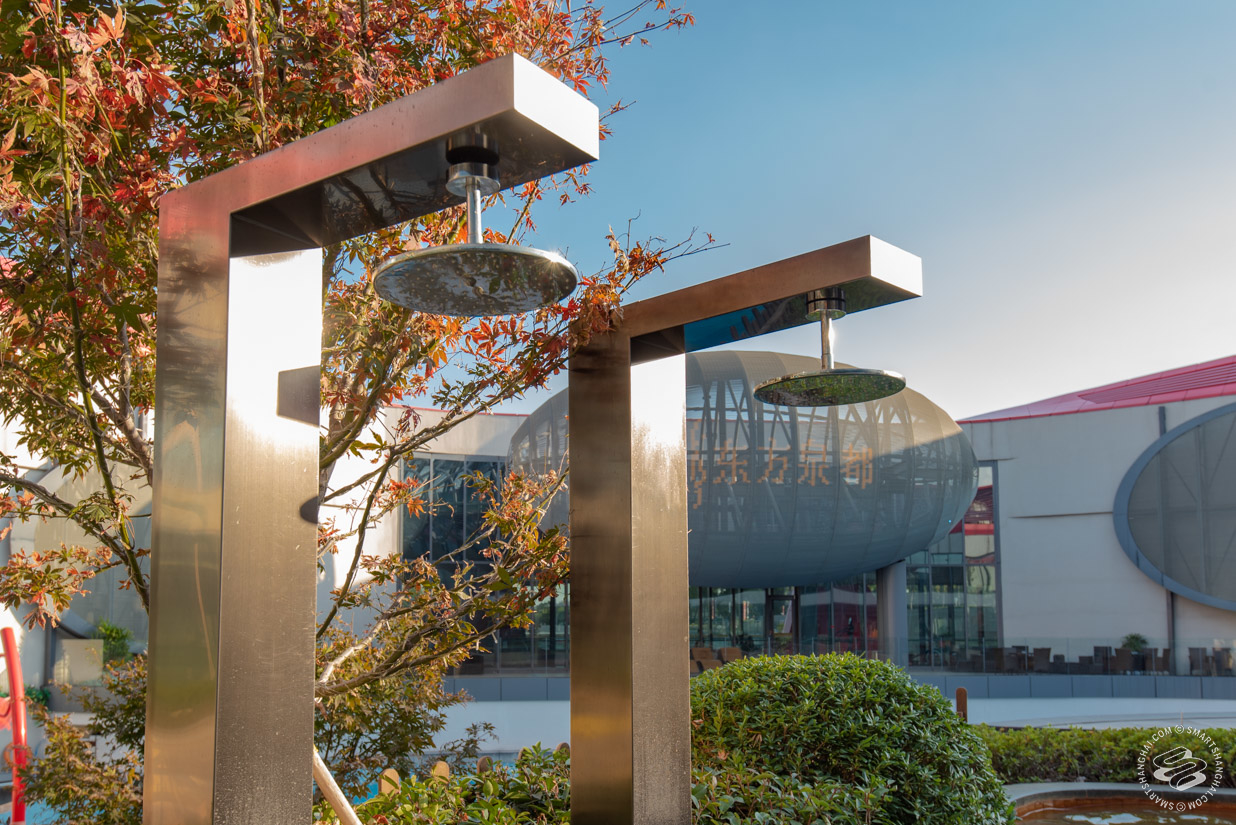 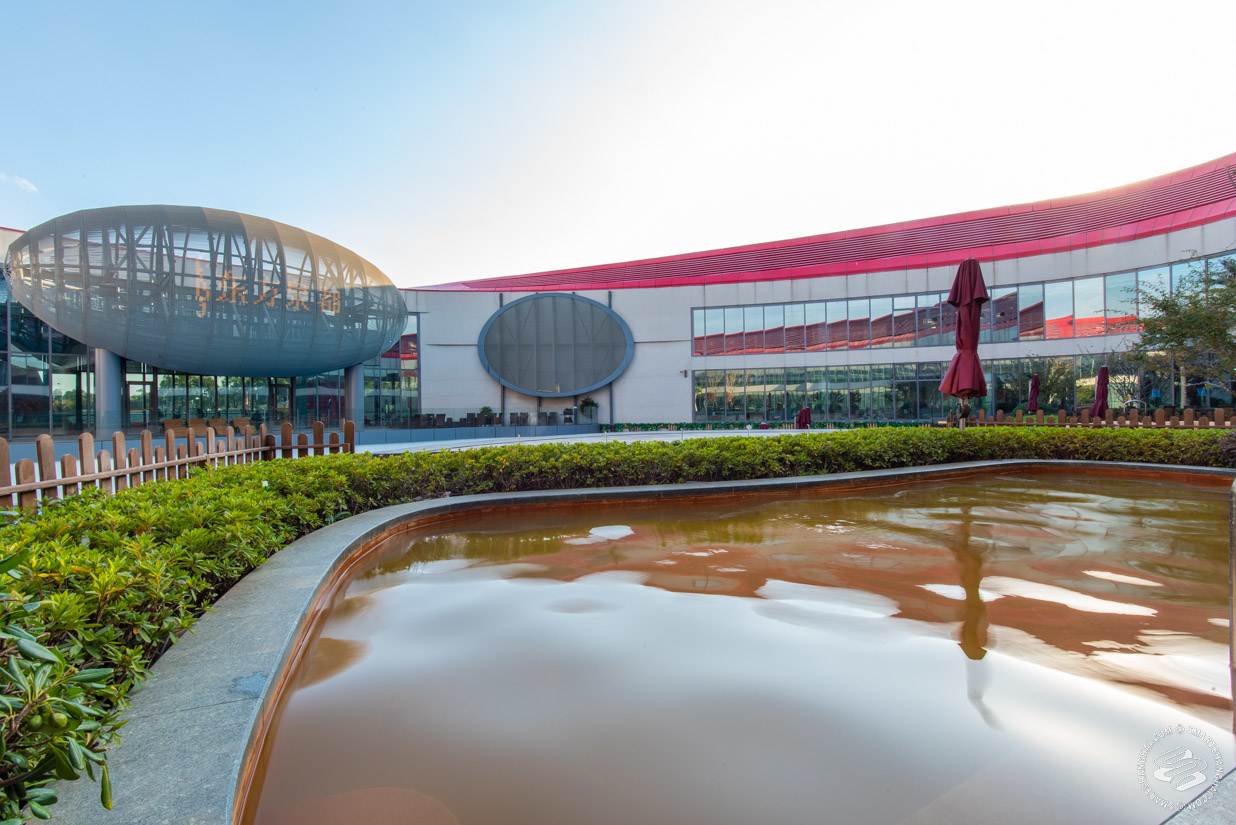 Here, they are tinted, scented, flavored, whatever’d with herbs, spices, and beverage components from rosemary and rose to green tea, red wine, and coffee. There’s also a rusty, bubbling dinosaur pit called the Golden Pool. Some are even just regular spring water. 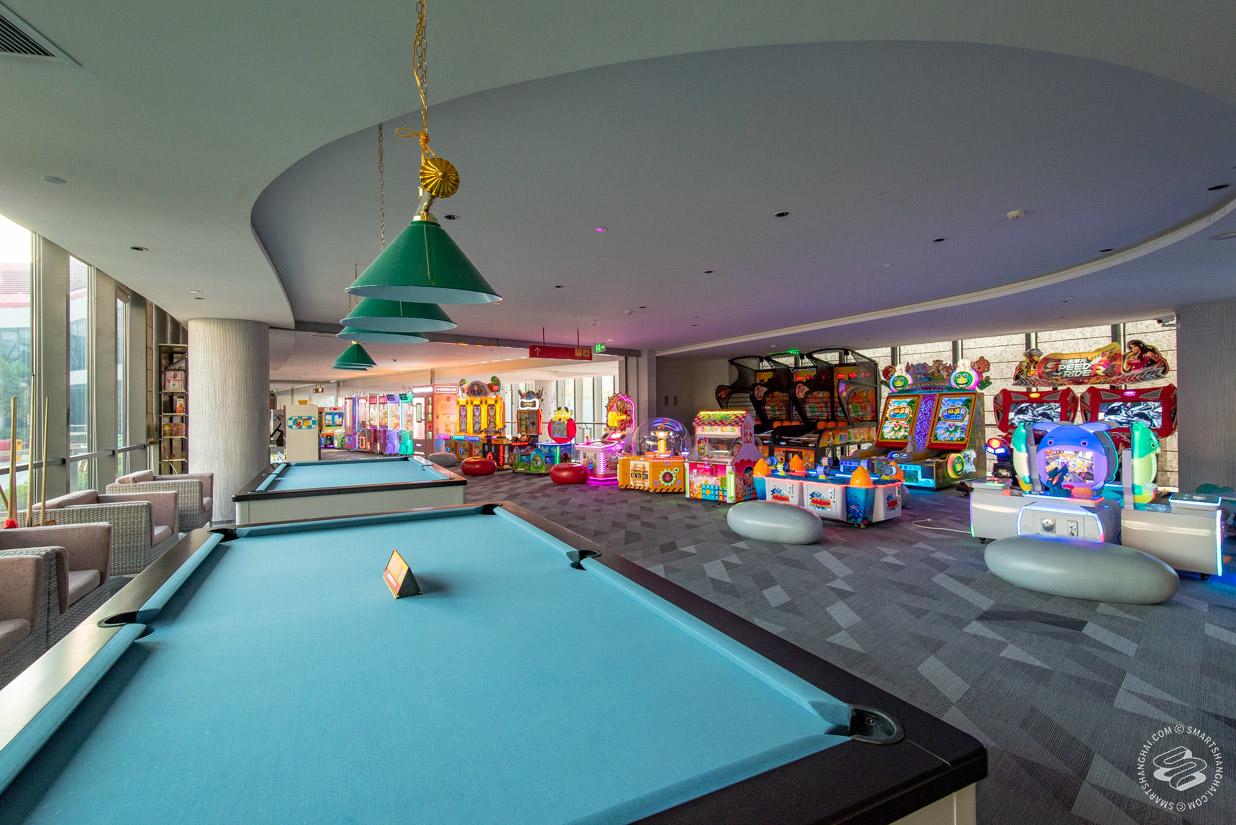 Inside, there’s a coffee stand serving Starbucks, an arcade, massage chairs (10rmb for 10 minutes, can’t go wrong), a relaxation and reading area, a kiddie play area, and five indoor saunas of varying temperatures — one has beds made from hot stones, which is a lot comfier than it sounds. There’s also a full-on massage parlor on the second floor and a restaurant on the third (though no alcohol available). 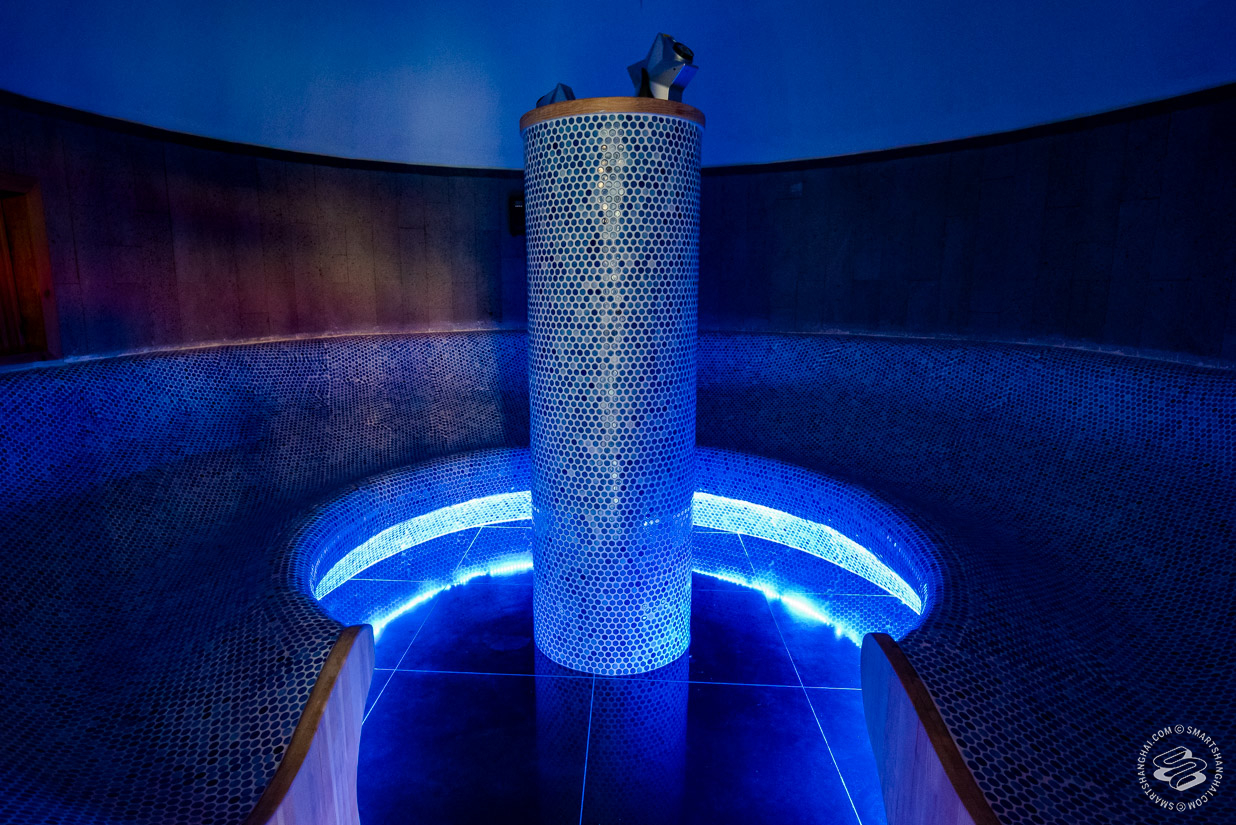 First Impressions: I’m a big fan of spas. They promote liberation, self-care, and enforced R&R. I like them more for Zen relaxation than as a group activity after a day of boozing, but that’s just me. I'm aware there is another way. 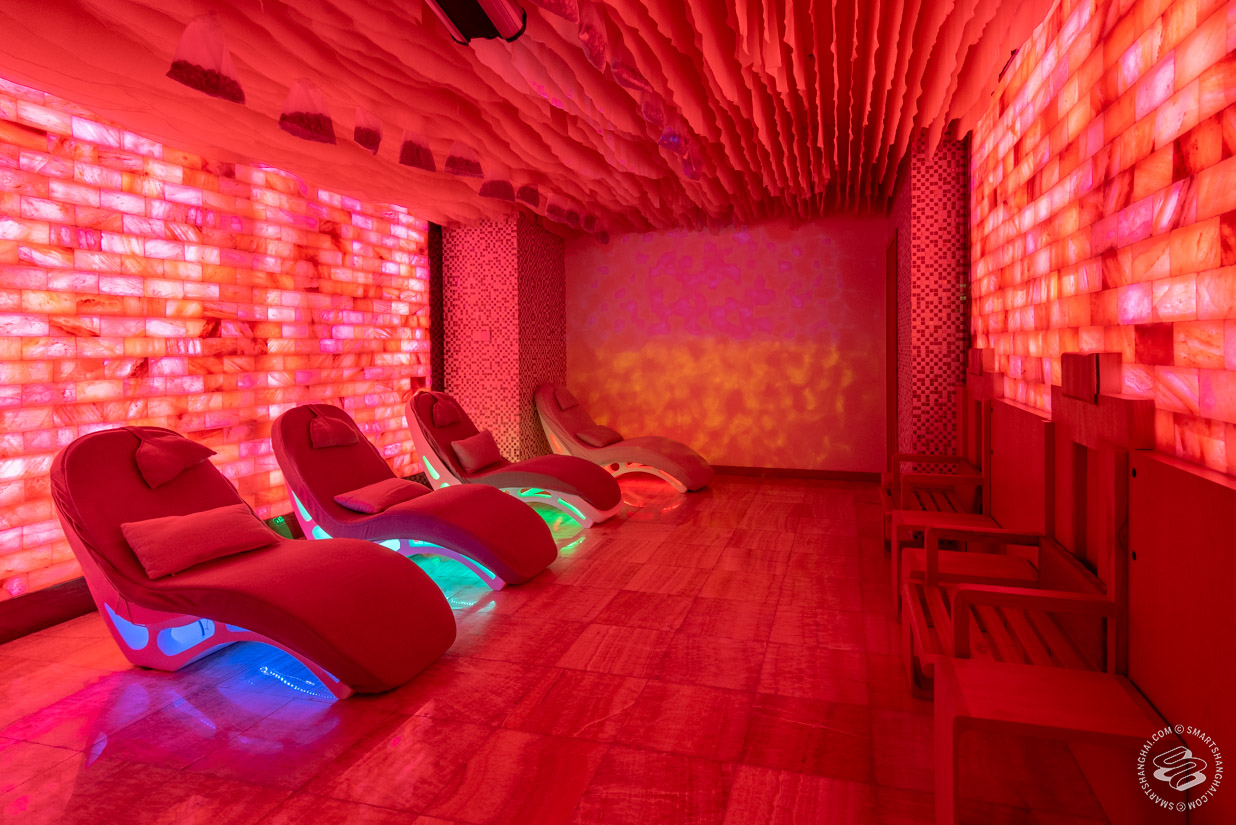 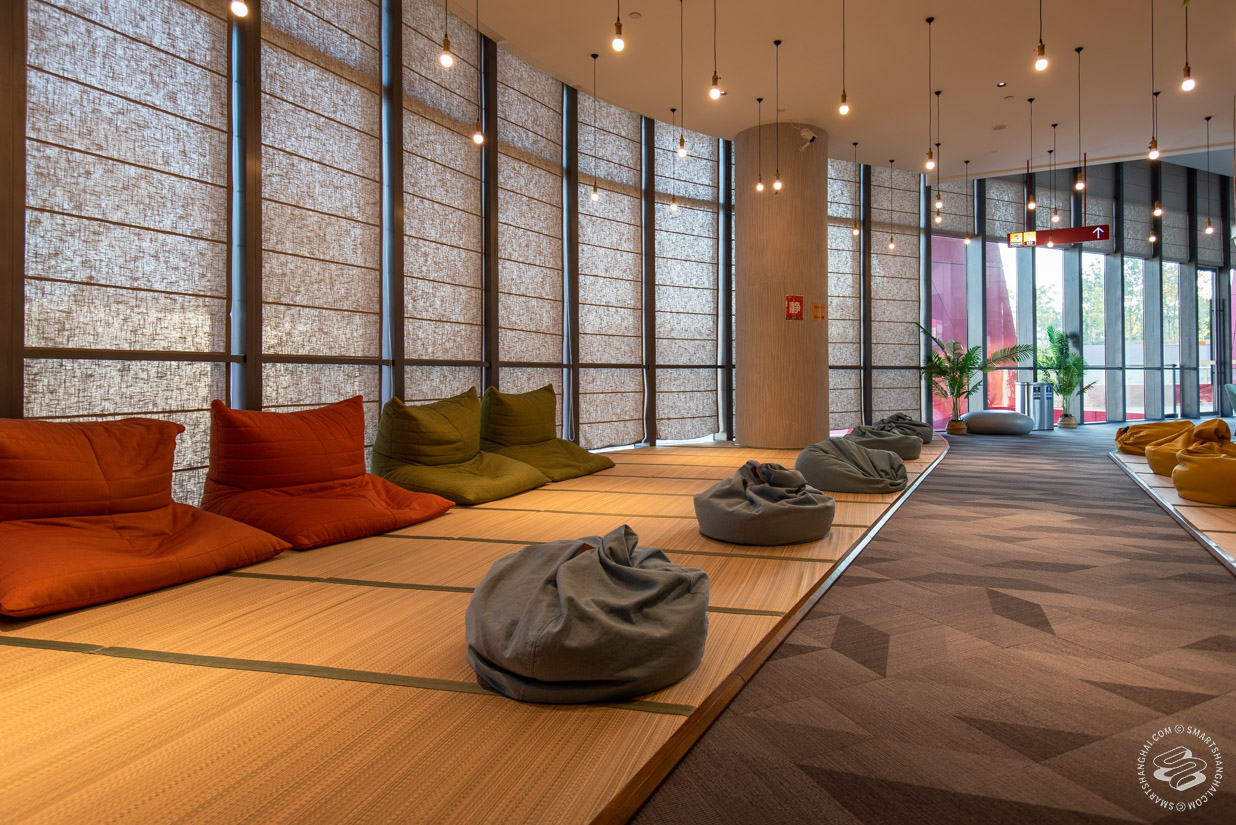 Inside, Oriental Spring is similar to other Korean or Japanese-style spas. Bathe, scrub, shower, eat, chill, leave. The only exception here is that you don’t bathe in the nude in segregated areas, but all together, with clothes, in the public area. Neat!

The combination hot (41.8°C) and cold (11.8°C) pools are great — shuttling back and forth is a rush, giving you that full-body tingle. 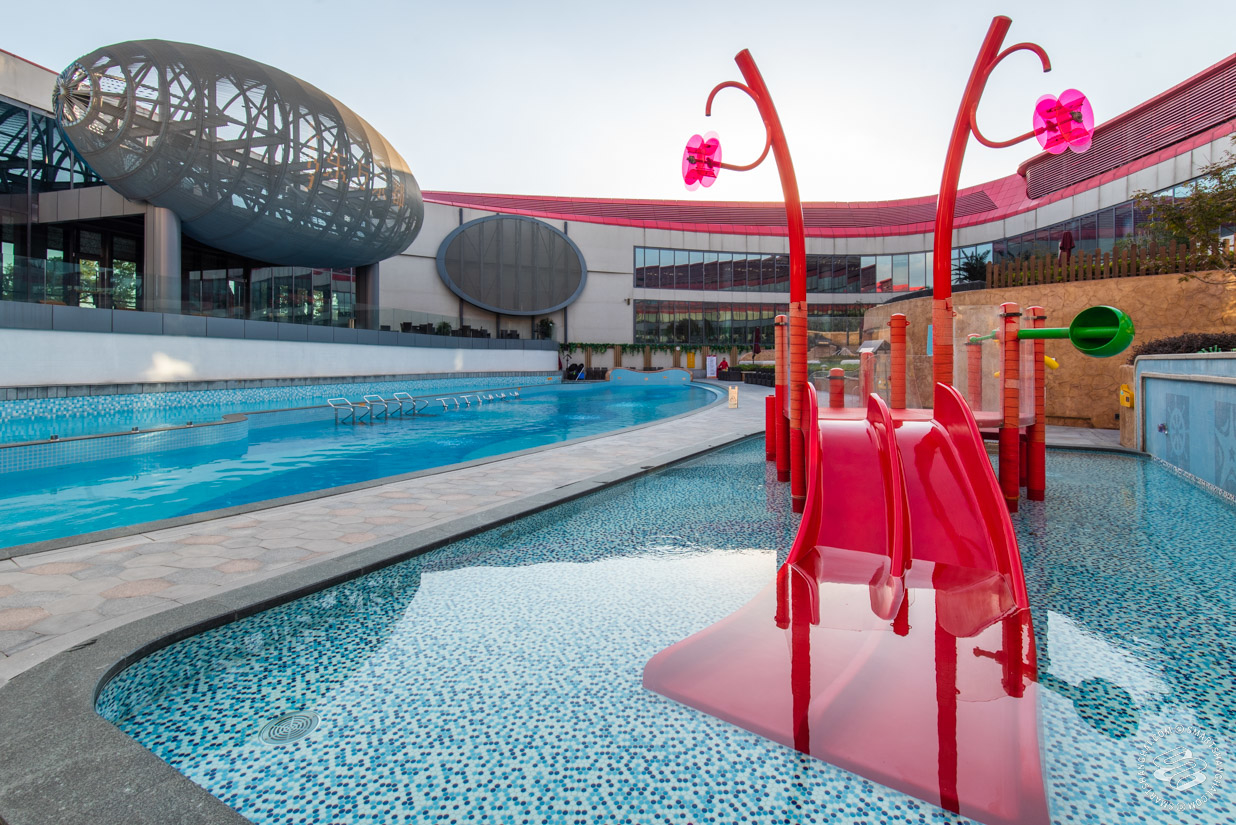 But still, this place is probably best for kids and families. The public area looks a little like a water park. There are water toys and a paddling pool, plus a pool bar with soft drinks and ice cream. On Halloween, it was a full-on foam party with music cranked way too loud. If you were to compare Oriental Spring to other bathhouses purely on the basis of value for money, it’s not bad for under 100rmb on SmartTicket.

But as an adult, you notice things. Most of the staff seem disinterested and stressed. The setup is stuck between fun family resort and luxurious relaxation palace. The “VIP areas” were either closed or strewn with garbage. 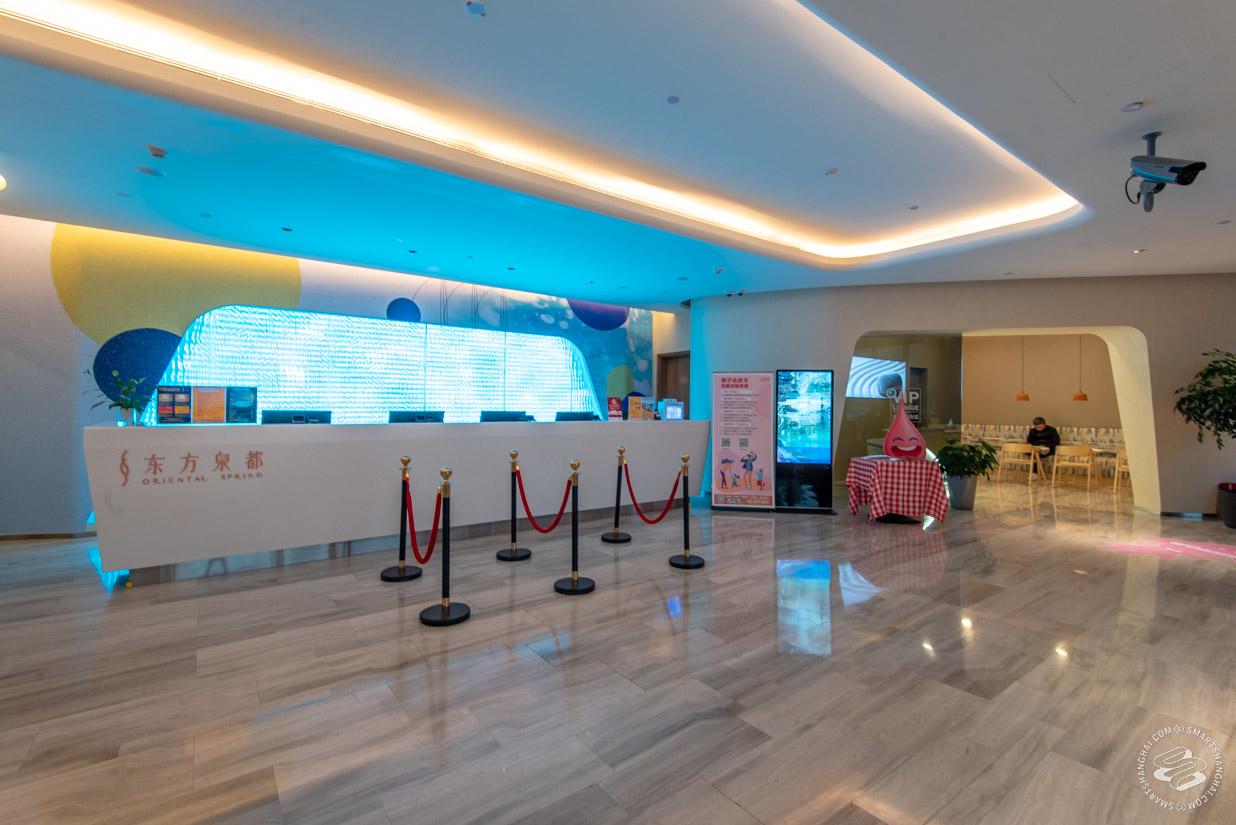 It could take a few pages out of other bathhouse books.

Take Lian Quan Da Jianghu (涟泉大江户). It defines itself clearly as a Japanese-style bathhouse, and nails it on the décor, ambiance, pajamas, and Japanese-style teacup-shaped baths you awkwardly sit in with your legs hanging off the side.

Or take the grandfather of bathhouses in Shanghai, the Korean-style joint New Star. It has loads of entertainment on top of its gender-separated hot baths, outdoor public pools, and indoor saunas — not to mention a walk-in freezer looking, cold sauna thing. It also has great food. For less than 100rmb you can get a cold beer and a Korean dish. Oriental Spring's buffet, on the other hand, is disappointing: limp spring rolls and noodle dishes straight from a three-star hotel spread.

Overall, the facilities are cool. I want to go back in a few months to lay in the hot pools while looking up at the night sky (the spa stays open until midnight).

For more on bathhouses and spas in the city, visit our Health & Wellness Directory.

Ed's note: A previous version of this article claimed that the building was previously owned or used by Ferrari. This appears to be incorrect. We apologize for the mistake.