Mental health is a major, global issue. But the vast majority of editorial coverage on mental health focuses on the western approach of medication meant to treat chemical imbalances, deficiencies or other specific irregularities.

What about Traditional Chinese Medicine?

Mental health has been an issue in this country — like it has in every country — for much longer than modern psychiatry has been around. Certainly, the country's deep and rich tradition of medicine has addressed this before, no?

Well, of course it has. The traditional theories for treating mental health issues come from the Huang Di Nei Jing (黄帝内经), a classic book of medical knowledge that's thousands of years old. It's also the basis for TCM for many other conditions.

Chinese doctors were developing treatments for mental health more than two thousand years ago, during the Han dynasty. Then about a thousand years ago, the first standardized clinical practices appeared and were refined over the Ming and Qing dynasties.

Fast forward to the 1950s, when the first generation of anti-psychotic drugs came out, and Chinese doctors began to adopt a blended approach (中西医结合) before the advent of clinical psychiatry in China in the 1990s. That's where we are today.

But what if you're interested in the traditional treatments? We sought out several practitioners who treat the most common mental health issues — depression and anxiety. (There have also been studies on TCM treatment for more severe illnesses like schizophrenia, but the effect of the treatment has deemed inconclusive.)

TCM is not suitable for people in crisis. If you or someone you know is suicidal, psychotic or otherwise in an acute state of mental distress, call the police (110), call the Shanghai Mental Health Center (6438 7250), take them to a hospital emergency room or call support hotline Lifeline (4008-211-215) for further resources.

TCM is controversial enough on its own. Its use in mental health situations may be even more controversial. This article does not judge its effectiveness but is only intended to be an introduction to an alternative view of mental health, as practiced in China. 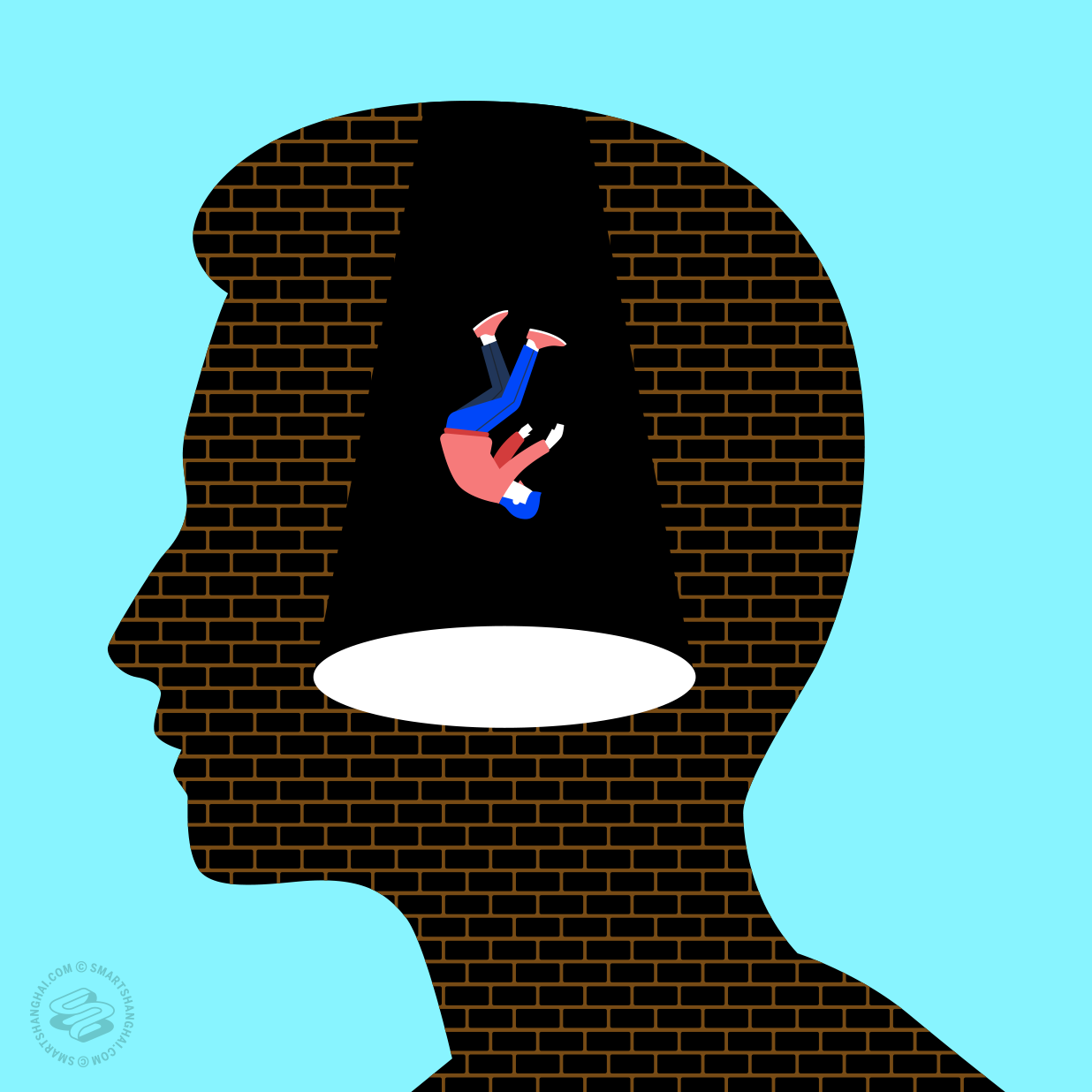 The Fundamental Difference with the TCM Approach

"In TCM, the mind is not seen as a separate part of the body ‘machine'," Dr. Bruce Xu, from integrated health and wellness center the Clinic, told me. "In TCM, they are interconnected." In western medicine, changes in brain and hormone levels are seen as the cause of the issue, like depression or anxiety, and modern anti-depressants and such work directly on the brain and its hormone secretion functions. But according to Xu, "the chemical changes are a symptom, not a cause."

Symptom of what? An imbalance between the body's "jing" (精) — the energy — its qi (气), and the shen (神), the spirit or mind. Changing any one of these changes the others, affecting the entire system. According to Dr. Xu, this is the philosophy underlying the TCM approach to mental health.

The generic term used to describe this sort of disorder is "an illness of the mind", also known as an illness of the shen (shenzhibing, 神志病). The symptoms are often broadly categorized as yu zheng (郁症), which could be translated as depression but is actually wider than that.

So what's causing depression or anxiety in this philosophy then?

Underneath that category, there are two factors: your energy (qi, 气) and your blood (xue, 血). In TCM, many major health conditions come down to disorders of imbalances of the energy and the blood.

Depression, for example, is described in TCM as a blockage of the energy (qizhi, 气滞) and a stagnation of the blood (xueyu, 血瘀). How? Well, "blood" refers not just to the red liquid in our arteries and veins, but all of the nutrients that flow throughout our body. When they don't circulate well, and the body is not receiving enough nutrients and sustenance, it begins to affect the mind.

This could be caused by a sudden loss of blood, malnutrition, poor sleep or not enough rest — all states that are then described as a weakness of the blood (xu, 虚) or a lack of energy (jing, 精).

"Postpartum depression is a severe xu condition," says Dr Doris Rathgeber, founder of TCM clinic Body and Soul. "So is burn-out. Too much work, too much stress."

Diet is one treatment for these conditions. Dr Zhong Yingyang, founder of TCM clinic Xi He Tang, described a condition with a young female patient suffering from mild depression. After a consultation, Zhong found she was not eating enough carbohydrates. Changing her diet improved her mood.

Bruce Xu, of the Clinic, attributes most chronic psychosomatic problems to "blocked or irregular qi (qijibuchang, 气机不畅)". By this theory, improper organ function, from poor qi flow, leads to physical and mental symptoms; particularly poor organ functions give rise to severe emotions, which may then develop into various mental disorders. And vice versa — strong emotions can impact the organs.

Eh? How does this work?

So, without getting too heavy or too deep, TCM categorizes the Five Wills (五志), which are common and strong emotions: anger, ecstasy, grief, worry and fear.

The five organs each corresponds to one of these wills. The liver is associated with and most impacted by anger, the spleen by worrying, the heart by ecstasy, the lungs by grief and the kidneys by fear.

"These terms don't suggest your literal liver or heart — the term means the organ's function," says Dr Li Yin, TCM doctor at Jiahui International Hospital. "It's not just the chemical changes in the brain."

Say you are experiencing sadness. Your mental state changes, which impacts your lungs. This change impacts your qi. And the impact on your qi throws the whole system out of balance. That's the theory.

Right, right, but how does TCM actually diagnose and treat mental health issues? 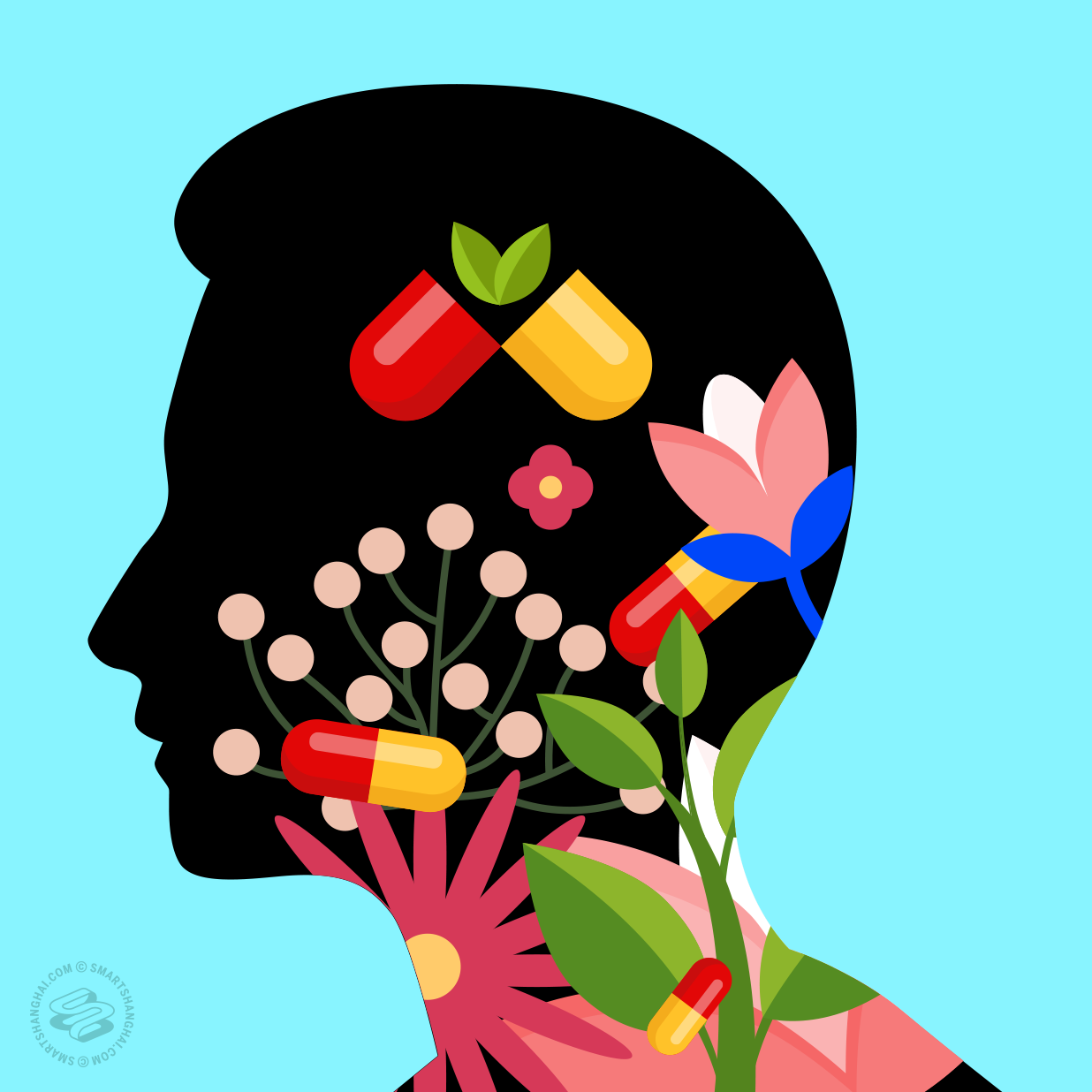 Same as always with TCM, there are four methods for diagnosis: observation; auscultation and olfaction; interrogation; and feeling and palpating the pulse. By doing this, even for mental health, doctors are looking at your physical body, the quality of your qi and blood, and the functioning of your organs.

No checking the boxes on a questionnaire that asks you to rate your feelings on "a scale of 1 to 10".

However, be prepared to tell it all. Your appetite, your food preferences, your sleep pattern, your bowel movements, the color of your poop and menstruation, your relationship with family and loved ones, your career, your sex life. All! Everything! Possibly more!

The interrogation diagnosis may feel like talk therapy. And it is. But TCM doesn't call it psychological counseling or separate the talking from the diagnosis. The doctors try to see the inter-relatedness of the symptoms, not the symptoms alone.

According to Dr Zhong, "the adjustment is for the whole system, through the qi and the blood, to restore your state of being to balance."

How do they do that?

The herbs don't directly affect the brain but are meant to repair and balance the functions of your organs. This is how TCM adjusts the qi.

And then there's acupuncture. The theory here is that the impulses from the needles will go through the meridians, and then affect the brain's activities, telling it to calm down and relax. This method also adjusts the qi.

Interestingly, neither herbs nor acupuncture are the most important treatment, according to Dr. Rathgeber. TCM's primary adjustment is to your lifestyle, not your organs, qi, or blood.

"Western medicine or TCM medicine, even the doctor, none of that is the ‘master key' to treating mental health," says Dr. Xu. "The real master key is in the body of the patient. It's the body's self-healing mechanism. If a person is not eating well or is not sleeping, how could they feel happy?"

Dr. Zhong goes further and says that "to recover from depression, a person must exercise so that the qi and the blood are not stagnant."

Exercise, diet, sleep... if you've ever visited a western psychiatrist, you'll have heard the same advice. Apart from the herbs, acupuncture and theoretical approach, sounds like the TCM prescription is roughly the same.

Should I Transition to a TCM Approach?

If you're having an acute situation or have a chronic condition, western medicine might be best.

"When a person is already suicidal, you can't tell them to get some herbs and wait it out. Acute State Management is different from Chronic State Management," says Dr Xu.

"A transition into a TCM-only approach has to be a step-by-step process," says Dr Li. "Acupuncture is used to supplement the medication. It's safer; it has no side effects."

But then there's a vital question: are you going to use meds for the rest of your life? This is where the limitations of western medicine start to show.

"It's not worthwhile to take away the drugs and let the person suffer, just to transition to a TCM approach," says Dr Rathgeber. "But quite often the doctors themselves would forget that after six months, a year or at most two years, they need to take the patients off of medication. The withdrawal is often neglected."

So one area where TCM might find common ground with the western approach is in the recovery and withdrawal process. According to all of the doctors I spoke with, none of them found any conflict between using western medicine and TCM at the same time. "A good doctor should be familiar with both," says Dr Zhong. 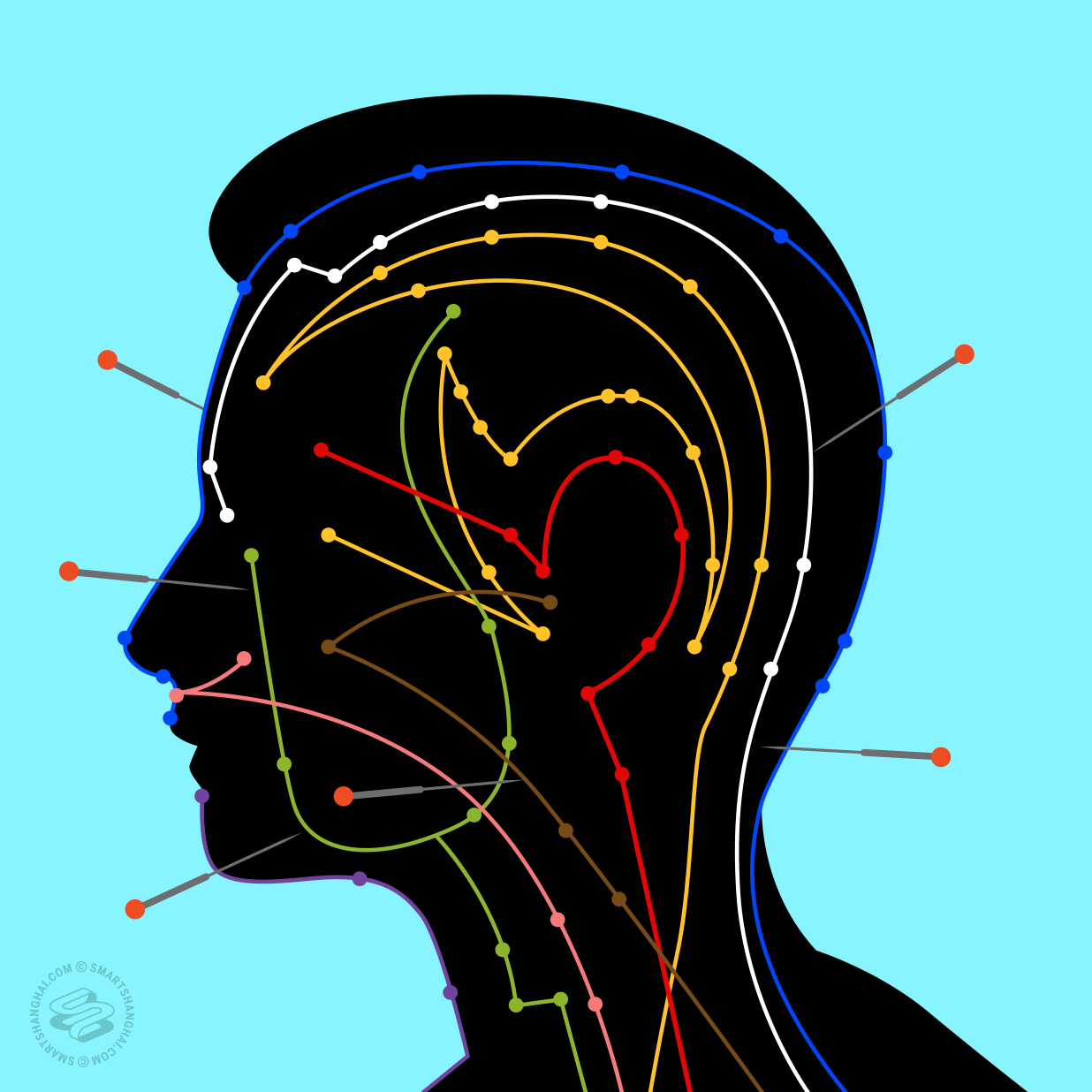 So Where Can I Go?

For English-speaking TCM doctors, there are several options.

the Clinic, a facility that focuses on integrated medical services as well as regular well-being programs. TCM is an essential part of their methodology. This is where Dr Bruce Xu practices.

Body and Soul, run by Dr Doris Rathgeber, who came to Shanghai nearly 30 years ago and has studied TCM for decades. Many of her patients are expats.

Xi He Tang, a reputable clinic in Pudong, is the base for Dr Zhong Yingyang. Born into a Hong Kong family, he grew up in the Netherlands, went to school in Germany, and studied TCM at Shanghai University of Traditional Chinese Medicine.

Columbia Clinic has a TCM department and offers medical consultation as well as tui na and acupuncture.

If your Chinese is up to it, or if you trust a Chinese speaker enough to help you translate some of life's more intimate details, there are several reputable, public TCM hospitals where the doctors are highly experienced from seeing so many patients every day and should be familiar with a blended TCM and western medicine approach.

Shuguang Hospital, affiliated with the Shanghai University of TCM, is a comprehensive medical facility. It was founded in 1902 and became a TCM hospital in 1954.

Longhua Hospital, founded in 1960, is another hospital affiliated with the Shanghai University of TCM, and also serves as an academic medical facility that does clinical research and training.

Shanghai Municipal Hospital of TCM is a nationally accredited hospital that focuses on TCM clinical practice and research.