The Big Guide to Clear Aligners: Where to Fix Your Smile Invisibly in Shanghai

A moment of silence for your teen braces.
By Abbie Leung
2020-09-14 13:00:00
Look, some of us have wonky teeth. And while we’re all about embracing flaws and generally being above shallow physical features, it’s fine to admit that having misaligned teeth can make us feel self-conscious sometimes. The good news is, it’s totally fixable and without the aid of train tracks — you could get that straighter smile so covertly that hardly anyone would even notice.

There are several brands of clear aligners out there, but the most popular one on the market right now is Invisalign. The brand is basically synonymous with the concept, like Kleenex, and it's slowly becoming the most popular teeth aligning treatment for adults. They're becoming so popular that it feels you couldn’t swing a cat in a Shanghai coffee shop without smacking at least five people wearing these cheat-your-way-to-a-Hollywood-smile makers.

What are clear aligner treatments, and how do they work?

The science behind clear aligners follows the same idea as braces: transparent shells or "aligner trays" fitted over your teeth gradually push them into a new position, causing cellular and bone changes that reset the teeth into a new position. The specific aligner tray materials vary by manufacturer but are mostly made from plastic polymers, created from putty impressions or digital 3D scans of your teeth. In Chinese, it’s known as 隐形矫正 or 隐形牙套.

During your initial visit, an orthodontist checks to see if clear aligners are right for you and then gives you a price estimate for the whole plan. Once you’ve recovered from the sticker shock — it's very expensive — a personalized treatment plan is plotted out and you can actually see a digital preview of the final result.

The treatment uses a series of aligners, switched out in increments every 10 to 15 days. The exact number of aligners you'll need and the length of time it would take depends on how crooked that smile is. Judging by statements online, it can take anywhere from three months if the correction is minor and you wore braces as a kid, to two+ years for more complicated situations. Don’t go in expecting a miracle overnight. In fact, according to Dr. Tanya Sun, a dentist at Jiahui Health, clear aligner treatment might require additional orthodontic techniques, such as attachments, interarch elastics, and "Interproximal Reduction (IPR) Stripping of Teeth" which sounds awful but just involves strategically removing some enamel.

According to the people we spoke to who have aligners, yes, they hurt at first, but it generally goes away after a few days.

The cool part of clear aligners (other than being “invisible”) is that they’re removable, so you can eat meals and brush your teeth as normal. For anyone who had braces and remembers getting stuff stuck in those bad boys, this is a big win. According to Dr. Sun, there's also less soft tissue irritation and requires fewer and shorter appointments (plus less emergency visits to fix a busted wire). However, being removable means that it’s your responsibility to wear your aligners as prescribed. Each aligner needs to be worn for three weeks for 20 hours a day to reach maximum effectiveness — but this recommendation may defer from dentist to dentist. If you forget to put them back in after brushing or leave them on a restaurant table (it happens), that’s on you. 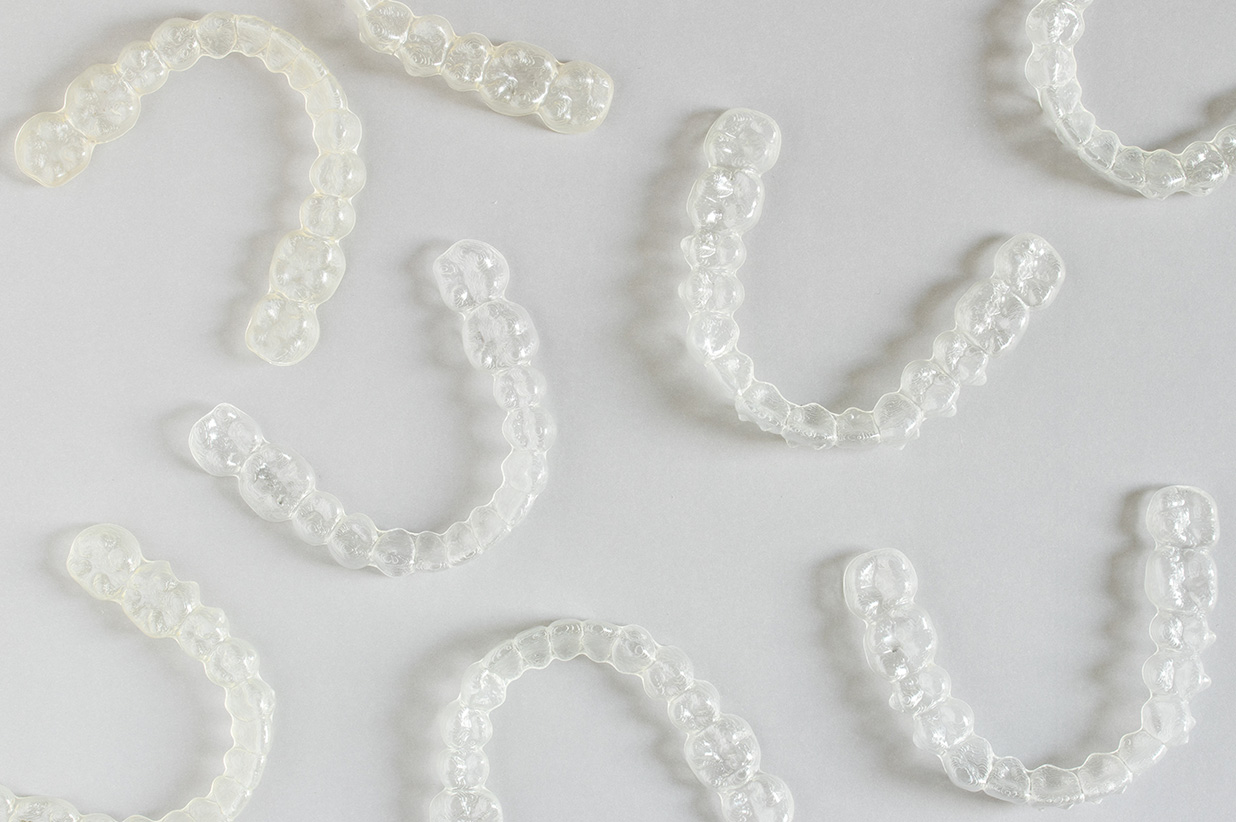 Who can get clear aligner treatments?

The general baseline requirement is that you have lost all your baby teeth — in dental jargon that's called "full permanent dentition" — and a fully developed mouth and jaw. This puts the minimum age at roughly 13. There are clear aligner options for teens and children but braces still seem to be the default option for younger age groups. It's also safe during pregnancy.

Clear aligners appear to be effective in treating a variety of cases from mildly to moderately misaligned teeth, like crowded teeth, overbites, underbites, open bites, and gaps between teeth, but they are better at correcting simpler issues. If your teeth are severely rotated or misaligned, or if you need orthodontic surgery before starting treatment, braces might be the way to go.

Important note: Any online guide (even one as good as this!) is not a replacement for a professional medical opinion. Consult a dentist or orthodontist about which teeth aligning treatments works for you before investing five figures in a decision.

What Brands Are Out There?

Invisalign (隐适美正畸)is the most widely known brand, and most dental clinics and hospitals in Shanghai offer Invisalign for their clear aligner treatments. But its near-monopoly status also means that it’s the most expensive option– the full package typically costs 50,000rmb.

Angelalign (时代天使) is offered at some private dental clinics and most public hospitals and understood to be the local version of Invisalign. Expect to pay somewhere between 20,000-30,000rmb

Both EasySmile (君笑) and xixilab are local brands that have set up their own clinics in Shanghai and both cost under 20,000rmb.

It’s worth noting that these brand clinics are set up specifically for their own products, meaning it’s likely they won’t be able to provide unbiased recommendations regarding your treatment. Both promise that treatment will be done within 16 months… we’re gonna go out on a limb here and assume that means they only accept patients with mild misalignments.

A quick browse on the good ol’ Interwebs gives a whole bunch of other names: SmileDirectClub, Candid Co, Byte, SnapCorrect… the list goes on way too long for this article. These brands ship your putty impression kits and aligner trays directly to you with no orthodontist intervention. That seems more wallet-friendly and convenient, but the American Association of Orthodontists has warned people against using them, and even filed legal complaints against SmileDirectClub.

Brands generally have marginal differences — what really matters is getting a professional opinion, as they will be plotting your teeth movement plan and making sure your current health conditions and needs are being taken care of.