Unravelling the History and Music of Shanghai Band Hogchoker

Know the story of this fellowship of rockers and their newest album, before they take the stage at Yuyintang.
By Mark Andrews
2021-02-26 12:00:00
Photos: Brandon McGhee
Okay, let's address the blatantly obvious elephant in the room. Hogchocker isn’t a thing that badly behaved deviants get up to. It’s a small ugly flatfish found in North America, as well as the name of a band here in Shanghai. The story goes that the band's original drummer had reeled in one of these on a trip with his Dad. For whatever reason, he loved the name, and for years he wanted to name a band after the fish. The bandmates hated the moniker, but they indulged him for their first gig, and ooops... the name stuck. Hogchoker will play at Yuyintang on Friday (Feb 26), launching their new album 'Roll Up for the Crazy Sound of Hogchoker'. Depending on what albums you would consider to count, this is either the band’s second or eighth studio album. Thanks to the generous help of COVID, this album has become a global collaboration. Associates from across the world have teamed up with the band, including singers from Jamaica and an Argentinian opera singer (more on this soon). We sat down with these gentlemen (they're genuinely nice guys, just look at those faces) to ask about their new album. 'Roll Up for the Crazy Sound of Hogchoker' is an irreverent, but ultimately light-hearted, genre-bending world-journey across social issues. It began when singer/saxophonist Simon Jackson and then guitarist JP tangoed into Bueno Aires for the 2020 Chinese New Year holiday... and got stuck there. “JP was engaged to someone from Argentina and traveled there to get married. My sister-in-law is married to a guy from Buenos Aires. So the two of us went together to visit and had arranged to do a series of shows,” Simon says.

A few of these gigs were set in Villa Gesell, a coastal resort. “They didn’t pay us much, but they give us free food and every day there would be this guy who came in from swimming in the sea and would start singing some amazing opera while he showered. My kids would go to the door and mime like they were singing it,” says Simon. The two gentlemen got talking, and it turned out the amazing arias and overtures were coming from Ernesto ‘Russo’ Bauer. Although not from Villa Gesell, Russo - an opera singer trained in Milan and well known for signing at the funeral of the former president (now First Gentleman of Argentina) Nestor Kirchner - was a local celebrity as he holidayed there every year. They started jamming together and he sang some verses on a salsa song Simon was working on.

As COVID got worse, and flights across the world were getting canceled, Simon, his family and JP got stranded in Buenos Aires. With a sudden endowment of time on their hands, Simon and JP reached out to Russo. “Although he only sings opera, he has a broad interest in music genres. From the start, he was open to trying something way outside his normal repertoire,” explains Simon. Meeting Russo again, the two had recorded the chorus to what would become the eighth track ‘Hands In The Air’ in Russo’s apartment. This was the beginning of the international cooperation. Hogchoker has its origins in the remains of Shanghai punk rock outfit XXYY and Scotland’s Torpedo Buoy – a multi-national indie group. Since forming in about 2015, the group has gone through many line-ups, with award-winning poet Simon the only steady member throughout the years. COVID had forced another line-up change as both JP and the former drummer were unable to get back to China. The new album is both an ode to the old and a welcoming of the new, with tracks from both former and current members. 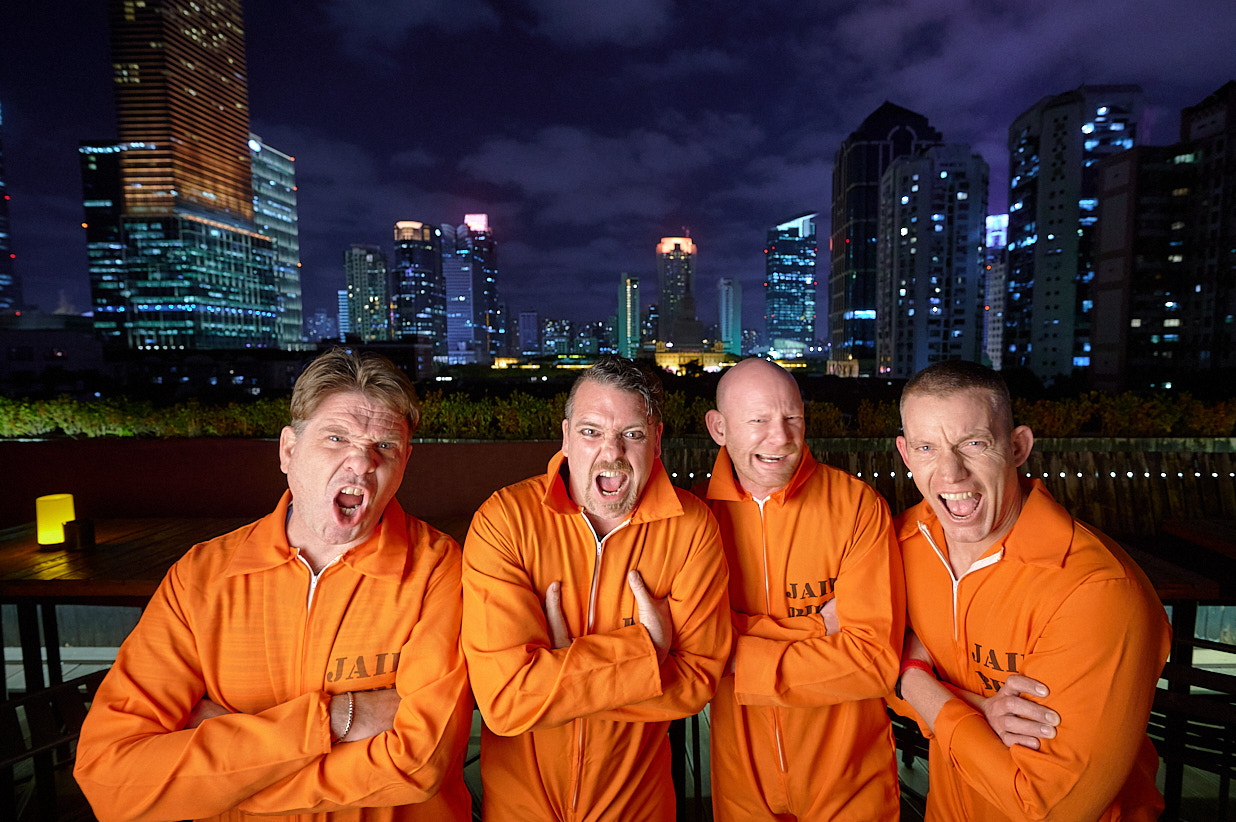 “It’s all quite new. I'm the second-longest band member to be in the group, about a year and a half. This is our honeymoon album. We’re getting to the stage where we know each other better and are playing tighter,” says bassist Tom Brody.

Although Simon writes the lyrics and the basics of all the music, each member puts his own interpretation in order to create a more complex sound.

Simon states, “I do think it’s the best line-up we’ve ever had. We’ve got guys who are brilliant with their instruments and understand a wide range of music. They are also good at interpreting my ideas, adding to them and making them better. Plus, they are all really hot-looking guys who you need to come and see." The group’s first album ‘Living in the Future’ made the Guinness Book of Records thanks to being recorded and released in seven different versions - each a different genre with a different line-up. There would have been three more versions, but Simon had his laptop stolen. (It contained the only recording of certain tracks).

After getting Russo involved in the recording, Simon decided to maybe further expand the global-breadth for the new album.

The vocalist reached out to three big-name Jamaican singers, Horace Andy (Massive Attack), Max Romeo (The Upsetters) and Big Youth to collaborate on some of the more Ska and Reggae-based tracks. All three are still producing and have released albums in the last two years, but due to COVID, they have been unable to tour. These artists were pretty keen on working with an unknown act from Shanghai.

“All three have a big sense of social justice and a lot of our songs are about social justice – I think that’s what attracted them to working with us,” explains Simon.

Long-distance communication had proved a problem. The trio originally thought they were talking to a big record label, rather than a bunch of teachers. The name had also proved some difficulty (as you can imagine).

“I contacted them saying, ‘We’re just doing the final mixing and we really would like your contribution, is there a problem?’” says Simon. There was a very big problem. Like most people, the trio had never heard of a hogchoker fish and thought the name must have something to do with pigs. “They came back ‘You’re named after swine, we have a big problem. Our faith is an Old Testament religion and swine is very unclean.’”

“This is where the origin story of our name comes in handy,” chuckles Simon. He explained to them everything, and in the coolest way, they sent back a text message “fish good.” It was on. The new album contains twelve songs, all of which have a strong message. ‘Roll Up’ takes inspiration from the hijacking of religion to control people. The idea for ‘Steal the Skies’ comes from how companies were bottling fresh oxygen and selling it in the heavily polluted Tokyo. “It is about how everything can become privatized and how endless capitalism tries to monetize everything. It was originally written from the perspective of apes in the jungle seeing humans come in and warning each other to 'be careful my furry brothers and sisters',” elaborates Simon. ‘Hey! Snow White’ is about how fairy tales reinforce a male-dominated society and is a woman’s response of asserting her right to her own sexuality. It is one of five songs featuring singing from former Chinese female lead - and sometimes collaborator - Lu Siyan. Hogchoker, along with Siyan, will play most of the tracks live on Friday when the album will also be available on all platforms.


Hogchocker will be at Yuyintang on February 26, 8.30pm. Entrance is 60rmb per person. For more details, click HERE. Interested in seeing live music on stage? Know that SmartShanghai has a Life Music Directory Page.