GGGGG: Here's All the Info on 5G Plans, Prices and How to Switch Carriers

It's time to upgrade!
By Lynn Yen
2020-10-29 15:00:00
The future, the myth, the anticipation: 5G! It's here, and now it's really arrived because Apple's iPhone 12, which supports 5G, is out! So we rounded up the options for 5G plans and collected a couple phones from other brands (gasp!) if you don't want to shell out for an iPhone.

5G stands for "fifth generation" wireless technology. The crazy fast download speeds (up to multiple Gbits per second) that are typically associated with 5G actually use a specific type of 5G, known as mmWave 5G, where the radio waves are mere millimeters in length. The other types of 5G are low frequency band (less than 1GHz) and mid-frequency band (1-6GHz). China's rollout of 5G is in the mid-band but just because it’s in the middle doesn't mean it's not a good option.

The high band mmWave (over 24GHz) is super-fast, but only works as far as a block and can be foiled by pesky trees, walls and rain drops. The short wave just can't make it through. So, the goldilocks mid-band is faster and has broader coverage, and it's what China currently has anyway.

How Fast Are We Talking?

We talked to a tech guy in Shanghai — a programmer — who has been using 5G on his Samsung Galaxy S10 since early 2020. He told us the 5G is worth it and noticeably faster than 4G. His coverage on China Unicom is good downtown and the subway is ok too.

So, we asked him to do a speed test using the Speedtest app by Ookla. In Jing'an, he had a clean 500Mbit per second download speed, and 66.7Mbit per second upload speed. 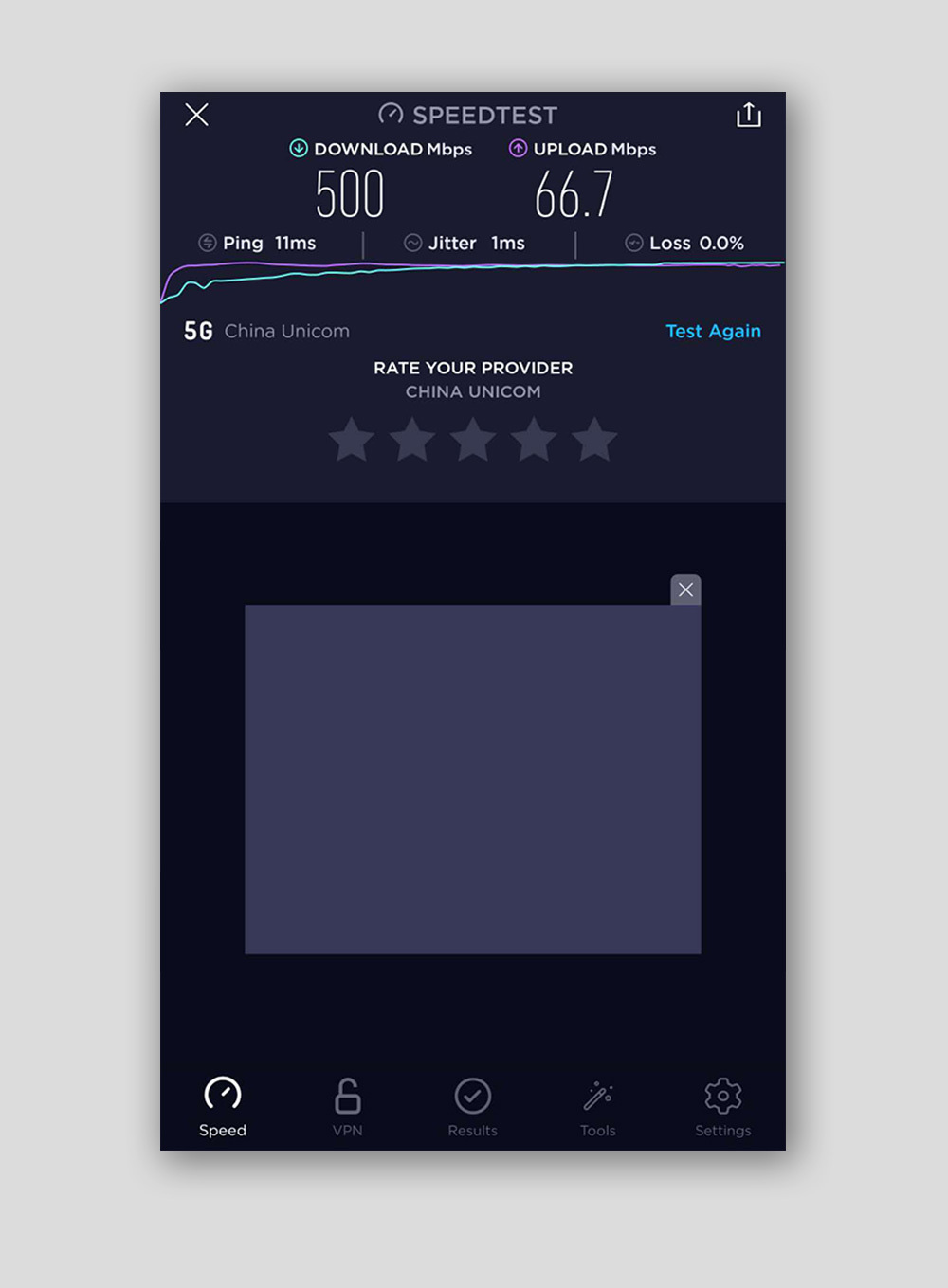 Compare that with an iPhone X on China Mobile's 4G we tested about three kilometers away: it had a 14Mbit per second download speed, and 2.93Mbit per second upload speed. So yeah, big improvements.

Keep in mind, the 5G speeds won't make any difference if you spend most of your time on wifi instead of cellular data, and if you're accessing foreign sites through channels that cap traffic speed.

According to the Apple and Huawei store representatives we talked to, "central Shanghai" — an area defined as a roughly 100km radius from People's Square — is completely covered by mid-band 5G. In fact, the city has set itself a goal to cover the entire city, including all metro stations, by the time the Import Expo happens in early November. That would make Shanghai China's third city after Beijing and Shenzhen to be completely covered by mid-band 5G.

First off, you need a phone that supports 5G, and unless you recently bought a new model, your current phone probably doesn’t have that capability. Good excuse to upgrade to that iPhone 12, right? Right! Scroll down for a few suggestions for phones that support 5G.

Once you’ve got the phone, you just need to visit a carrier and have them switch your service package.

Before, if you wanted to keep your existing phone number that your whole life (bank account, WeChat) is attached to, you would need to stick with your same carrier. That seems to have changed at some point: according to a sales representative at China Mobile, you can switch to different carriers and keep your same phone number without any requirements or fees. Hooray!

China's big three carriers now all offer reasonably priced 5G plans around 130rmb per month, although the speed of 5G is split into tiers. The fastest 5G will be pricier, naturally.

Once you pick the data, you'll need to pay for voice minutes. Or you can go for the preset plan:

Or just go for their most popular plan:

The price: 129rmb
So yeah. They are basically all the same. For the typical user, 30 gigs a month is more than enough — too much even? — but it’s the minimum you can buy on 5G data and voice package plans.

Note: foreign passport holders are not eligible to sign up for multi-year contracts meaning you can't lock yourself into a specific carrier in exchange for a cheaper phone. Those with Chinese ID cards should ask about available packages that will help save you some money.

The 12 has two lenses (12 Pro has three) and the new magnetic MagSafe back that facilitates wireless charging. Read a review here.

Released in March 2020, the three-lens phone is known for a good battery life, measured at 13 hours.

Launched in February 2020, the Mi10 has been well-reviewed for a good screen for videos and gaming.

The 10X, released in June 2020, is an all-around decent phone for a pretty attractive price.

Triple camera with good 30X zoom and reverse wireless charging which lets your phone charge other devices. The S20 was highly reviewed when it came out in early 2020.