The Newbie's Essential Guide to Skateboarding in Shanghai

Where to flip, trick, grind and dip in the concrete jungle.
By Anthony Gates
2020-09-16 12:00:00
Photos: Angela Leung
Essential Guides: Getting down into the essentials of what you need to know about Dining, Nightlife, Sports, Activities and more in Shanghai.

Skateboarding. It's been a part of that new Shanghai spirit since like the late 80s. It's been getting harder and harder, but anyone with a board and a set of wheels can find a skatepark or stretch of concrete to suit their tastes, if they know where to look. We met with avid members of the city's skating community (let's call them Bill, Winston and Mat) to pick out some of the best spots to go skating around town, and where to get some new duds or a board when yours is all worn out.

You probably already know about SMP. It was the biggest skatepark in the world when it opened up in 2005, but 15 years on… let's say time has not been kind. The ground is chipped in places. Wear pads if you're going here or you might knock a tooth out. The park's also just outside of Baoshan, so it's a bit of a trip to get there. Here are some others you might not know about. 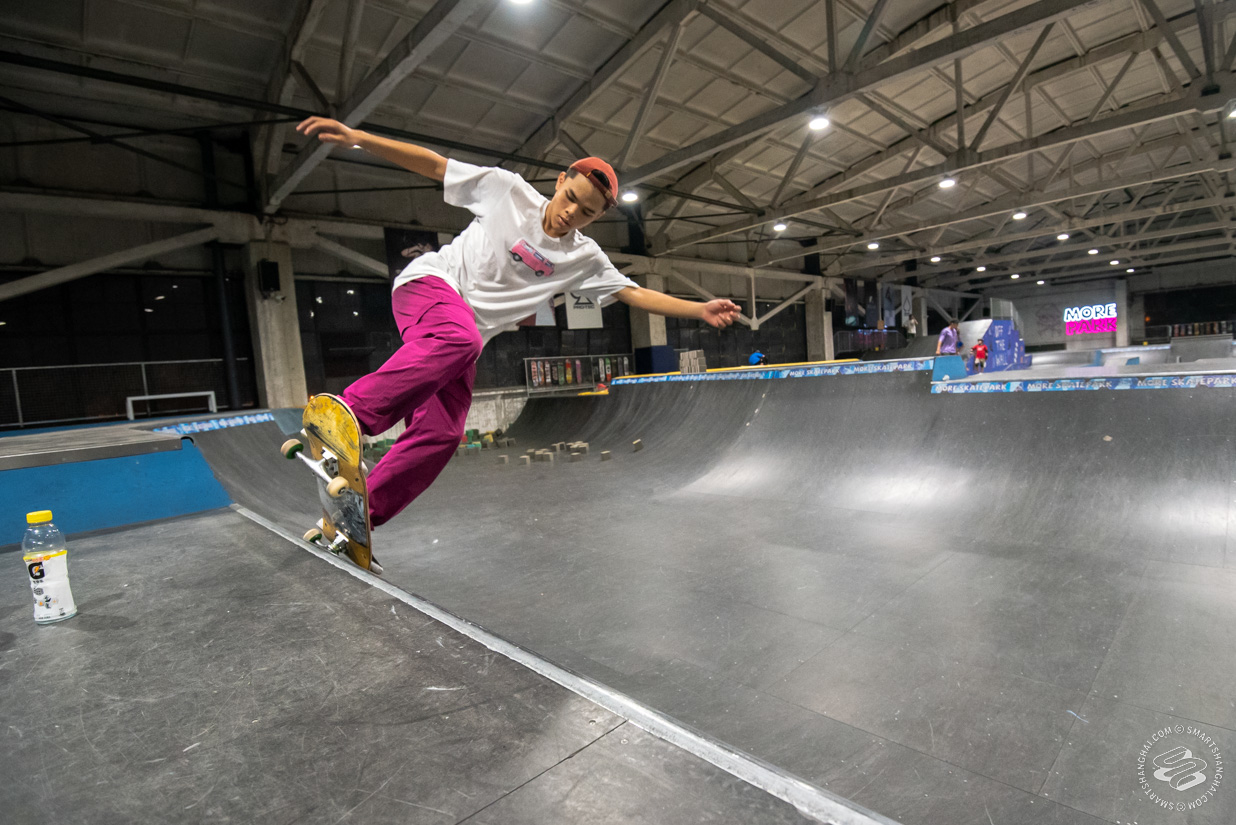 More Skatepark is a massive indoor skatepark, great for all skaters. It’s got everything: pools, halfpipes, vert ramps, grind rails, a bunch of stuff. For kids needing lessons, teachers and classes are available. There is an entry fee: weekdays are 98rmb but on weekends it rises to 168rmb. Binjiang Green Space on West Bund contains a public skatepark, open to anyone. Head down in the afternoons to avoid the large crowds and baking in the sun. For those of you out near Changning, Gubei and Xujing, you've (finally) got a skatepark near you. The Linkong Skateboard Park, right next to Suzhou creek on Linhong Lu, is an outdoor skatepark packed with ramps and rails. Whenever the weather is good, hop on over and skate (free entrance too!). 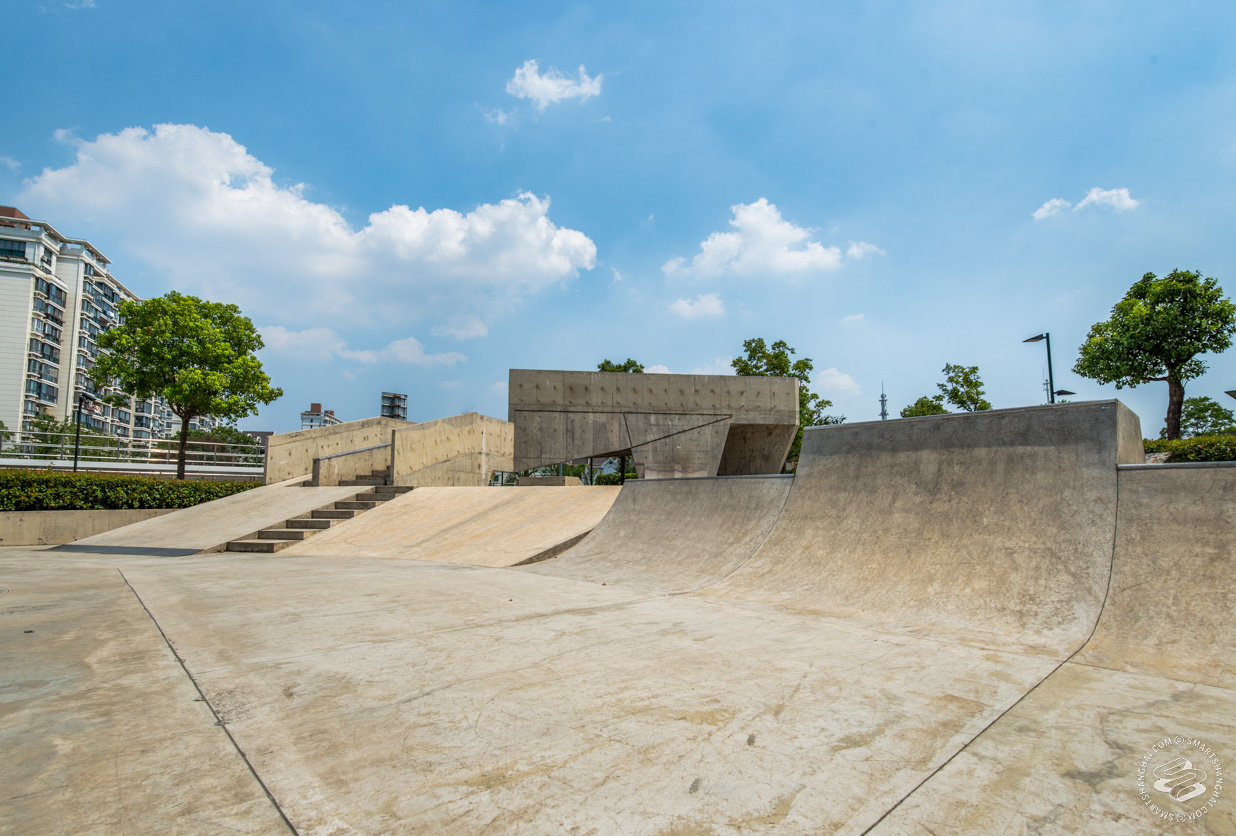 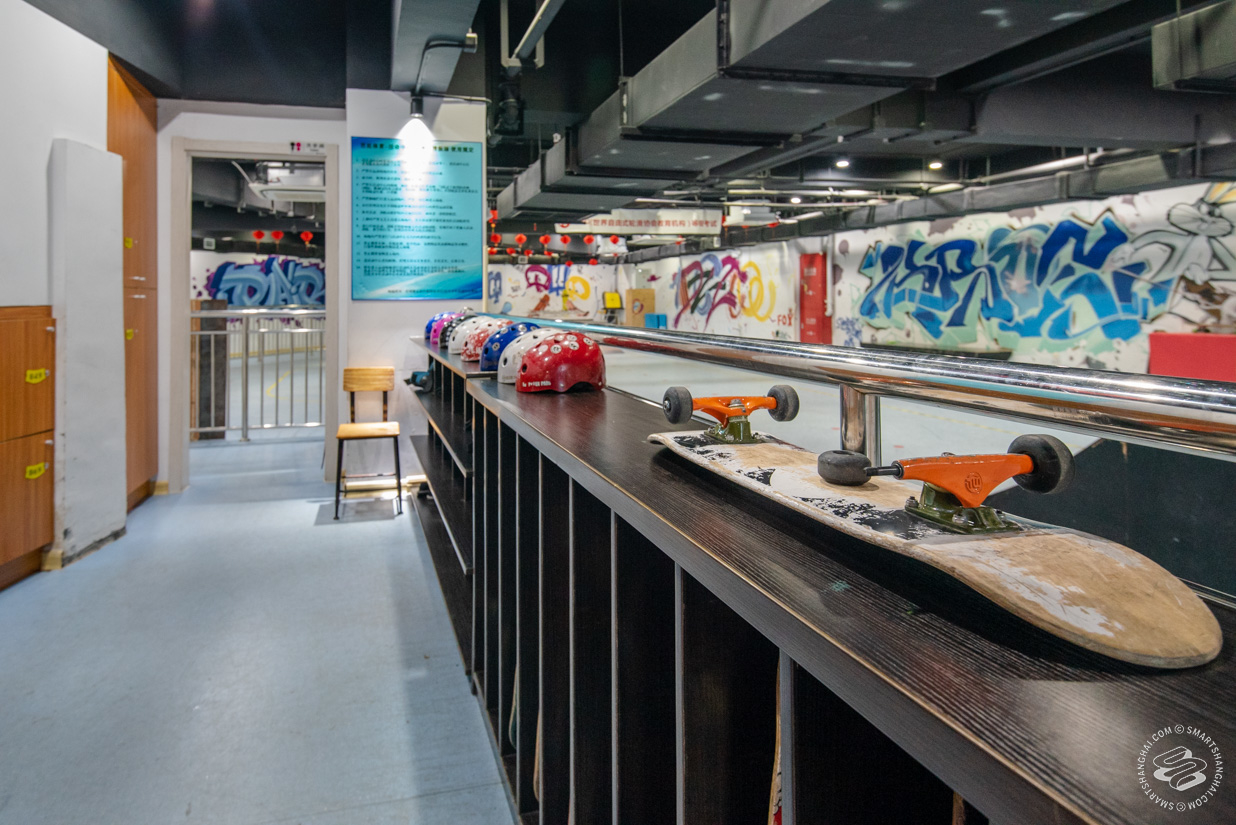 Below the Sports and Fitness Center is ICONX indoor skatepark. This one's great for kids, there is plenty of space for beginners to get started, and nothing tough enough to get hurt on (no massive half-pipe here, concerned parents). They're only open for reservations now, so make sure to call ahead. They also have a location in Pudong. 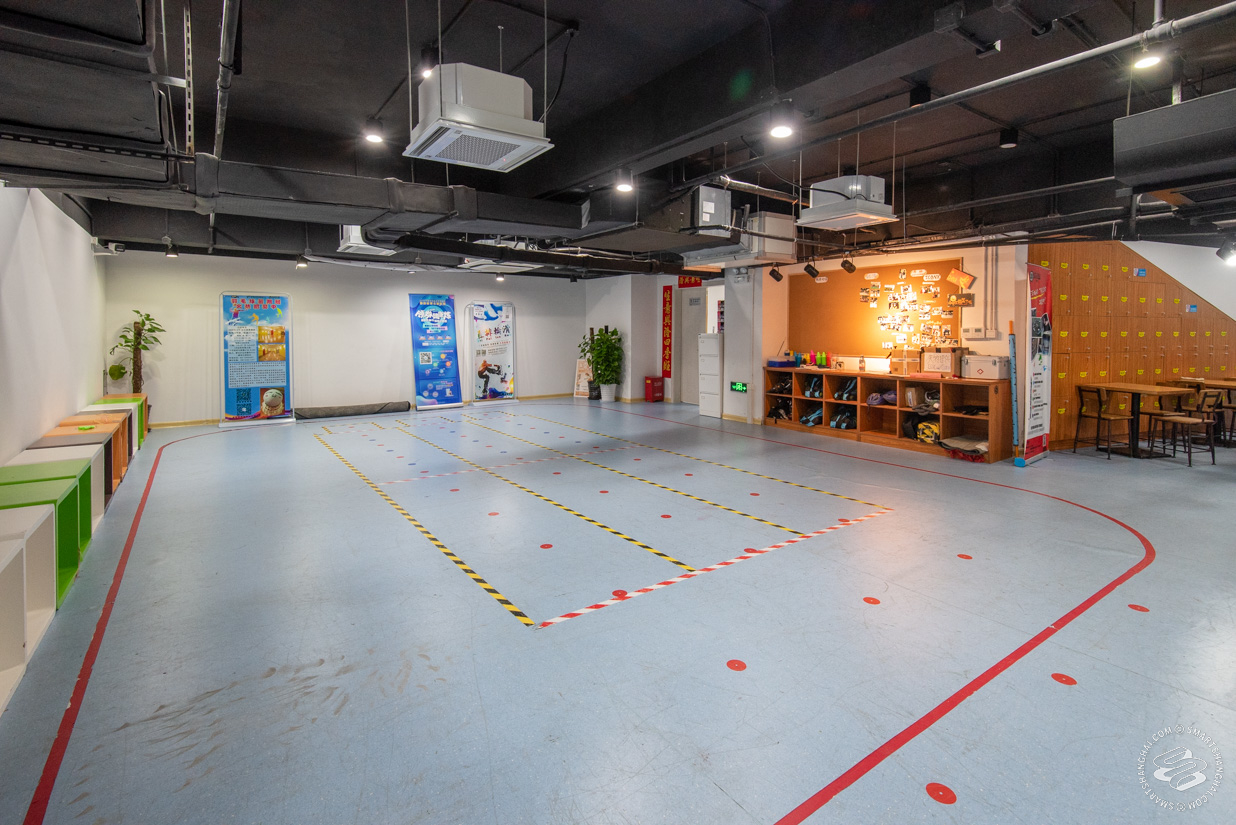 It's getting harder and harder. The most high-profile casualty is undoubtedly LP (Love Park) just south of Shanghai Concert Hall, which used to be the heart of skate culture in Shanghai for a long while but got aggressively redeveloped about four years ago. Shanghai Center used to be a skate-friendly spot too, but has since erected signs, barricades and a bunch of security guards. Skaters are having to go further and further out to find spots to skate, but they do still exist! A note on skating in public: you're not owed the right to grind whatever you like. Problems with authority is baked into skate culture, but — just some general Shanghai advice — don't mess with security. If there is security lurking nearby, check if it's alright to skate. If security asks you to leave, then leave. You absolutely don't want the authorities to get involved. 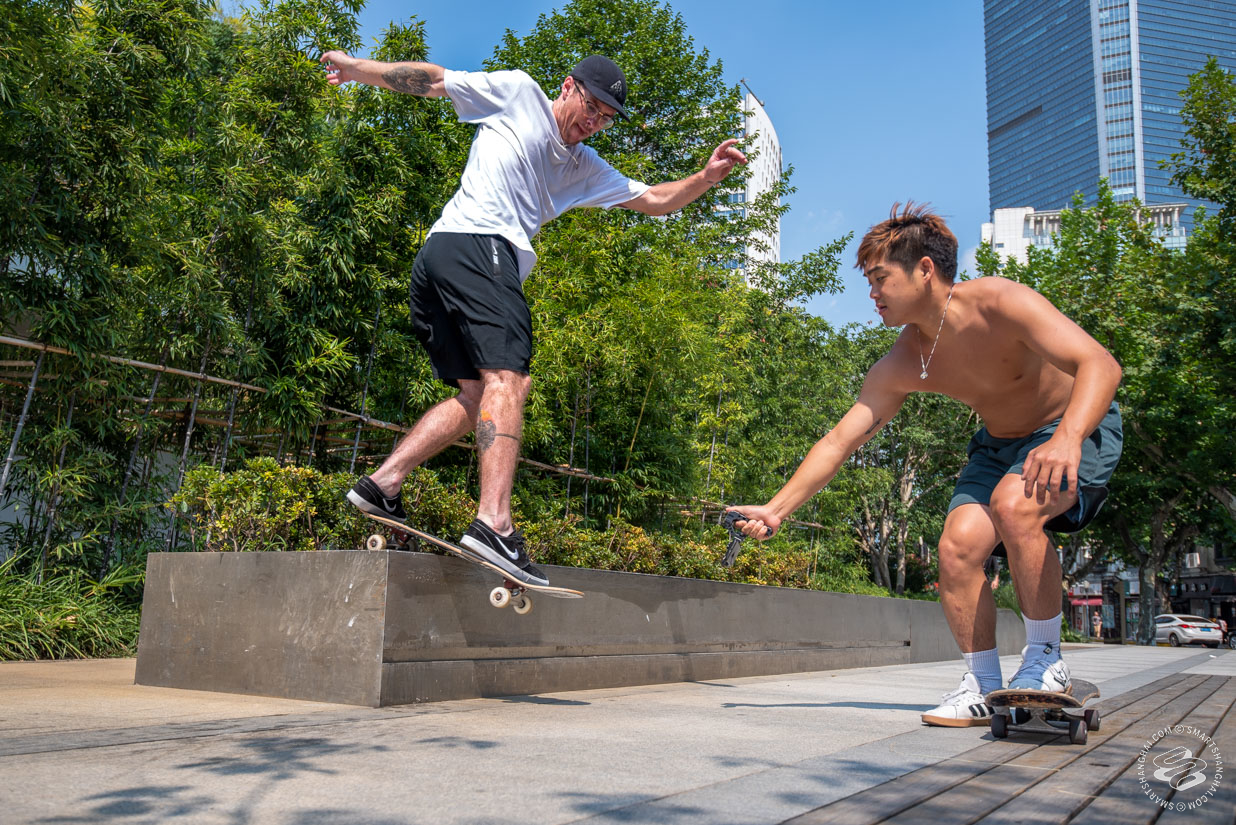 In between the bustle of Najing Xi Lu is the cutest littlest park named Nangjing West Road Greenland. Next to all this greenery is a designed seating area, where the seating has conveniently been shaped in ramps. Acute angles and metal frames, these improvised ramps are great for grabbing air and grinds. Not for novice skaters, though: people still walk on the pedestrian road. 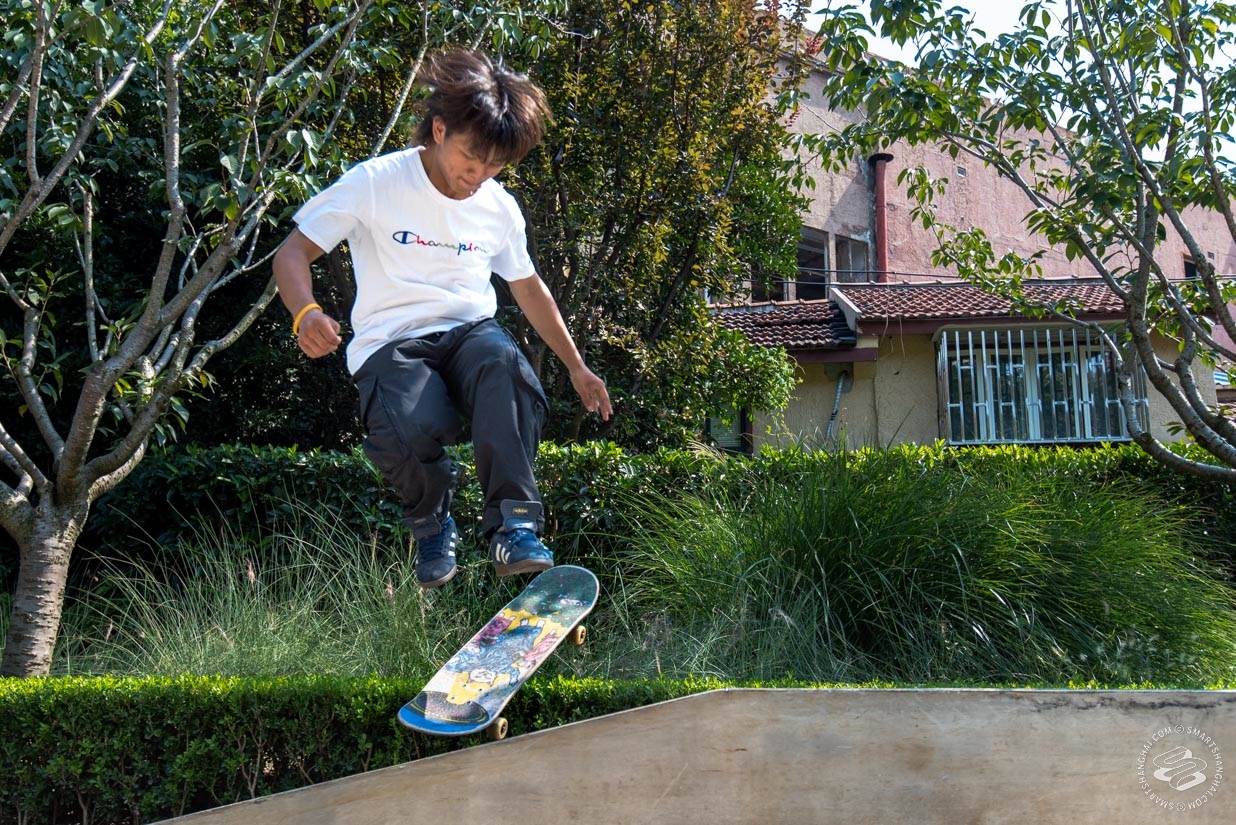 Near the Science Technology Museum is an open area that's a common meet-up spot for skaters. For new skaters to Shanghai, this might be a good place to meet others in the community. Best time to go is around 3pm on the weekends, when everyone is usually out and about.

Binjiang Green Space might have its own skatepark, but it's also riddled with go-to spots for skating. You won't have a hard time finding them, just try outside the Long Museum. Open space, downhills, flat ground, benches, it’s good for a skate.

The Nike Store on Huaihai Zhong Lu has a flat open space nearby, ideal for skating. Keep in mind, Huaihai Zhong Lu is a shopping district, so during open hours, hundreds to thousands of people will be walking around. Go in the late evening, when there's barely anyone around.

You need a board (maybe it's your first one, or maybe your old one broke) and some new sneakers to go with it. Where do you go?

There's a great board shop called Avenue & Son, located on Guangfu Lu. These guys are Shanghai-founded and owned, and even have their own merch line. Boardhead is another brand that was started by dudes from Shenzhen. Both of these brands have localised supply-chains, so if there are any issues with the products purchased, you can send them back to the manufacturers for repairs and replacements.

Spot Skate on Changle Lu is a basement store filled with decks, sneaks’, clothing, skate wax, a bunch of stuff, and all of local and international origins. Some of the staff speak English, but don’t sweat, they are some of the friendliest people you could meet. If you've ever walked down Changle Lu, you've definitely passed the brother and sister stores of Vans and Flystreatewear. Vans obviously offers their classically designed sneaks, while Fly stocks a more esoteric collection. You can design and build your brand-new skateboard from the diverse supply of decks, trucks, bearings, wheels and grip tape. Get an in-store coffee as your board is being built. How Much Will A Board Cost Me?

Skateboarding isn’t expensive, but it ain’t cheap either. Your biggest expense (apart from medical bills, knock on wood) will be your board. For a really top-quality skateboard (America-imported and strong deck durability), you are looking at spending around 1,500rmb. You're probably not going to need that if you're just starting out: you can find boards in the 900 to 1,000rmb range at Avenue & Sons.

Where Can I Watch Professionals Skate?

Now? YouTube. In other times, the obvious answer was X-Games. That’s massive. The competition has been in China for more than ten years, and this global championship brings the best of the best from all over the world to Shanghai. Or at least, it used to. This year's game was cancelled, and next year’s still remains TBD. 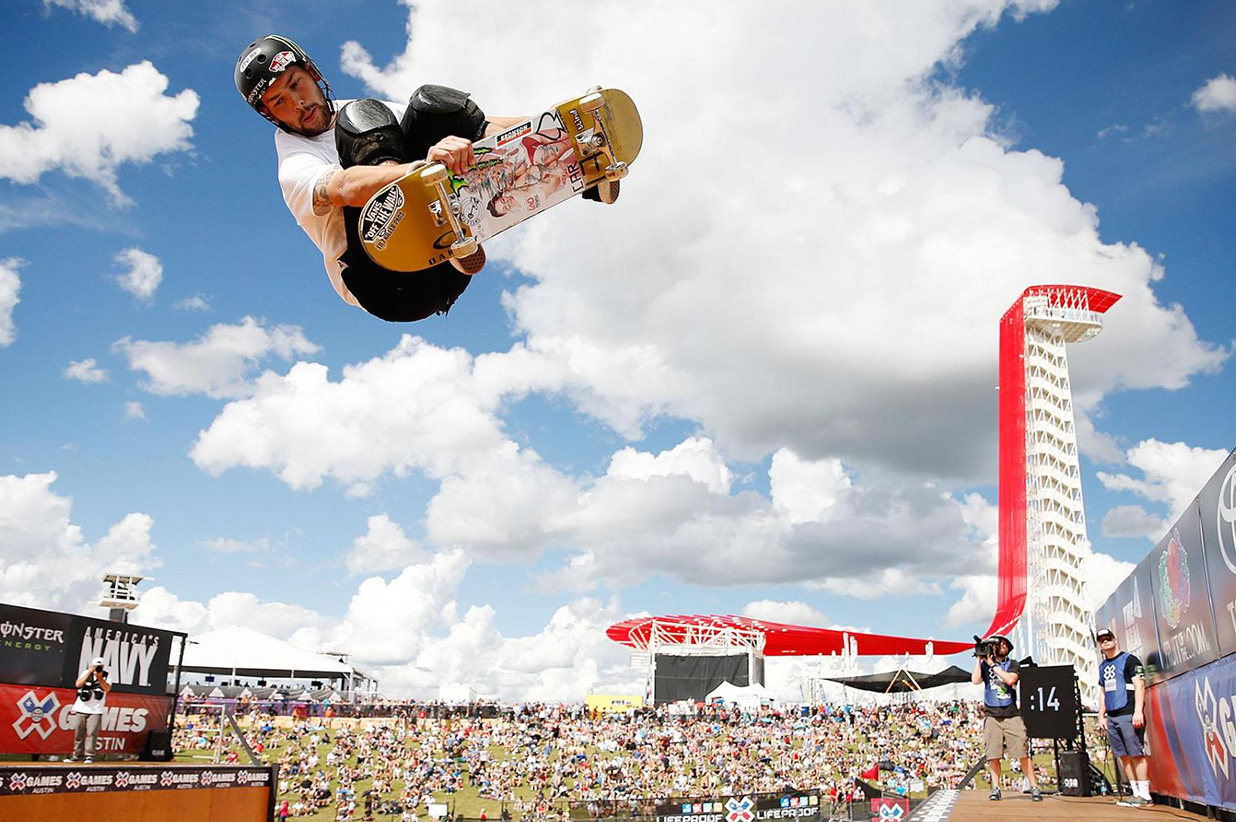 Vans also held the Park-series here in Shanghai, bringing out some of the hottest skaters in the world in order to compete. Japan’s very own Sakura Yosozumi came last year for the Woman’s Pro Series and earned first place. Keegan Palmer from Australia and Jordyn Barratt from the US also competed. Young and ambitious skaters came out to really compete. The next one hasn’t been scheduled yet either, due to, yeah, the pandemic. Fingers crossed 2021 will be a better year for it.

Meanwhile, plenty of time to practice. 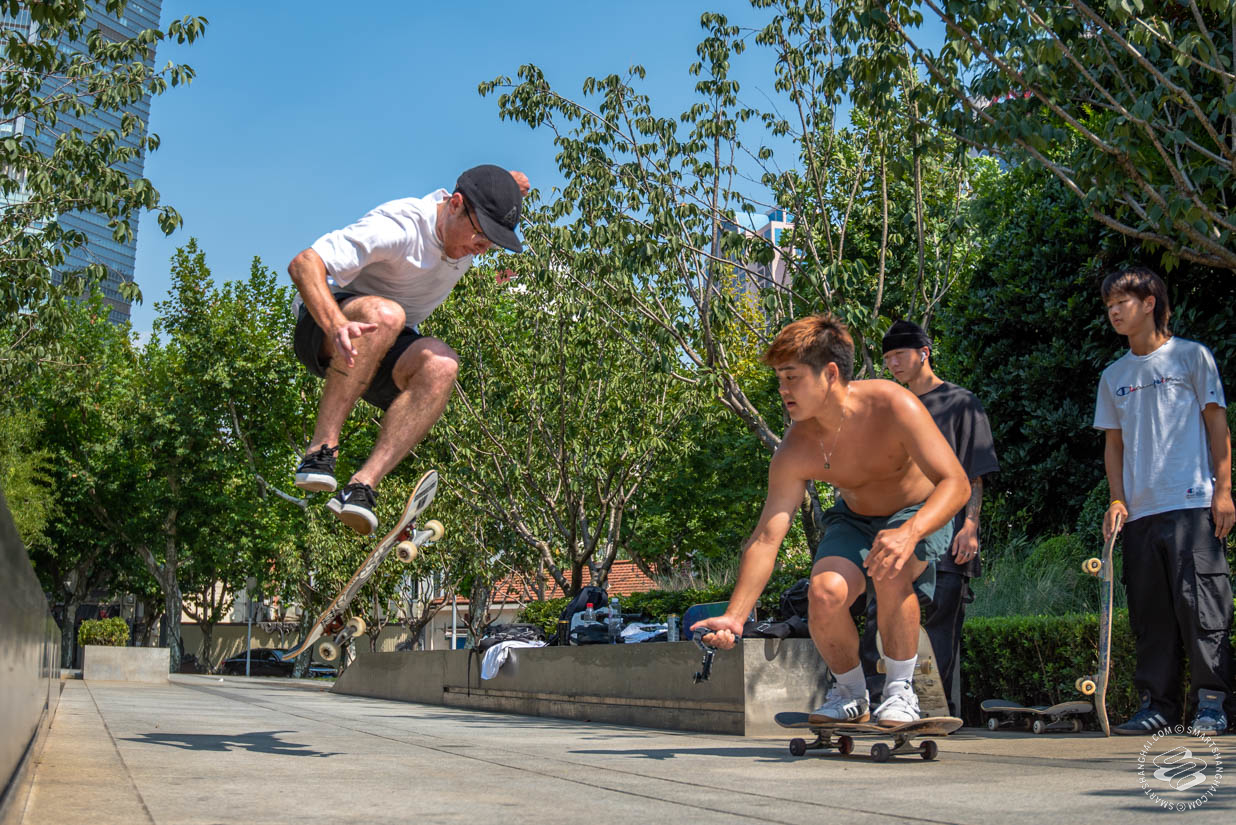 Looking for more skate stuff? Check out the Skateboarding section in our venue directory.