My name is Zhi Xiang (智祥). I am from Yuyao in Zhejiang. I am 52 years old, and I came to Shanghai in 1987 to study at The Buddhist Academy of Shanghai. It was my first time visiting Shanghai, and I was staying at the Jade Buddha Temple; that’s where the academy was. It was my first year as a monk. We had to give up our family name, and my teacher gave me my monastic name, Zhi Xiang.

When I was little, everyone around me had faith in Buddhism. People from my hometown had a long tradition, and I grew up with the rituals they practiced. My mother was Buddhist. Our family wasn’t vegetarian, but my mom would do things like killing fish before she scaled them, so the fish wouldn’t suffer. These things influenced me. When my grandmother passed away in 1987, a guy working at Shanghai Buddhism Association was in my village. I asked him a bunch of questions about Buddhism; I had always been interested. He thought I was very passionate, so he asked me if I would want to become a monk. And I said, yes, definitely. I didn’t even think about getting a job, a wife or a house. I had no other ambition. I only wanted to become a monk. That guy wrote me a reference letter to the Buddhist Academy of Shanghai. I was 19 years old.

I came to Bao’en Temple (报恩古寺) in 2006, after going through my studies in the Buddhist academy. The temple was short-staffed and I wanted to get out of the hustle and bustle of the city. I came, and I stayed. 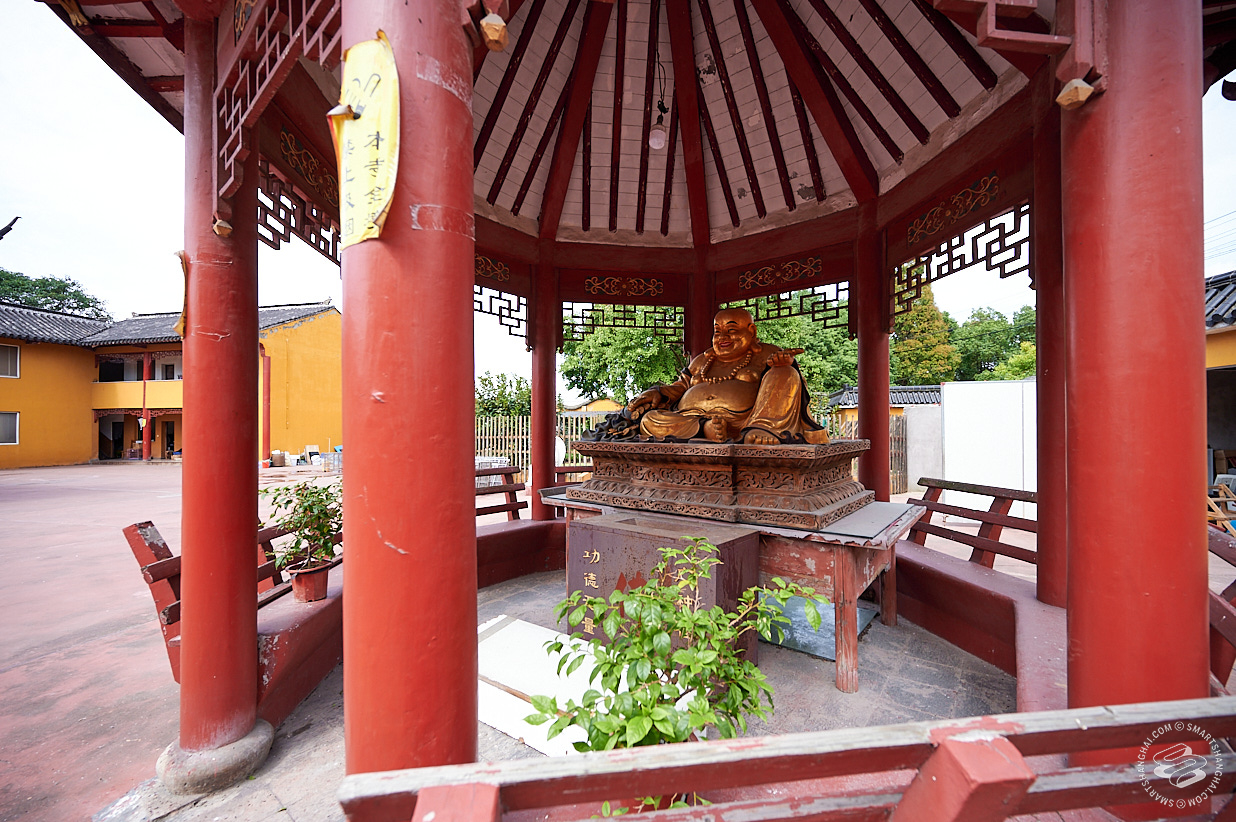 I started to save stray animals in 1993. I was in a car on the highway and I saw a cat that had been hit by a car. It all started there. The cat wasn’t dead, but it was badly hurt. It was crawling to the curb with two paws. I still remember this scene clearly.

After that, I began to notice so many animals that had been hit by cars. I brought plastic bags with me and buried the dead animals. If the animals had survived, I paid to sterilize them and then set them free afterwards. Eventually, I just started driving around with no other purpose than hoping to find animals that needed help.

I think, subconsciously, I have always been hoping to rescue more animals. I also did it differently. I always took them to the vet to sterilize them so they won’t breed more stray animals. I've been doing it for more than 20 years, but I didn't spread the word until just recently. I don't like getting attention from the crowd. I don't like promoting myself, unless it's for rescuing animals. It's different. I need help from the media. We need supplies.

I didn’t accept a donation until January 15, 2017. Until then, when people wanted to make a donation, I said no, the animals don’t need money, they just need food to eat — you can help by donating supplies. I was keeping the animals in Bao’en Temple. At one point, I had dogs, cats, chickens, ducks, geese and a peacock. But the temple was too small. 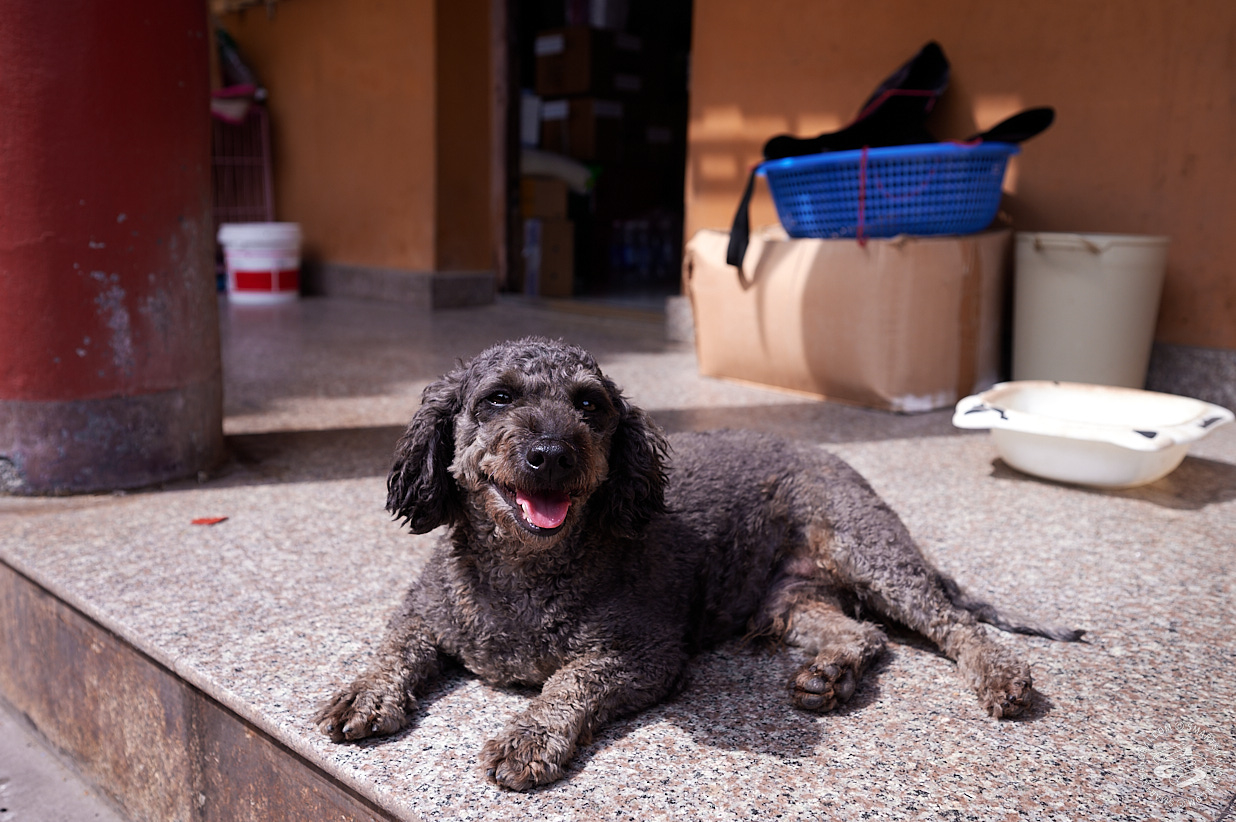 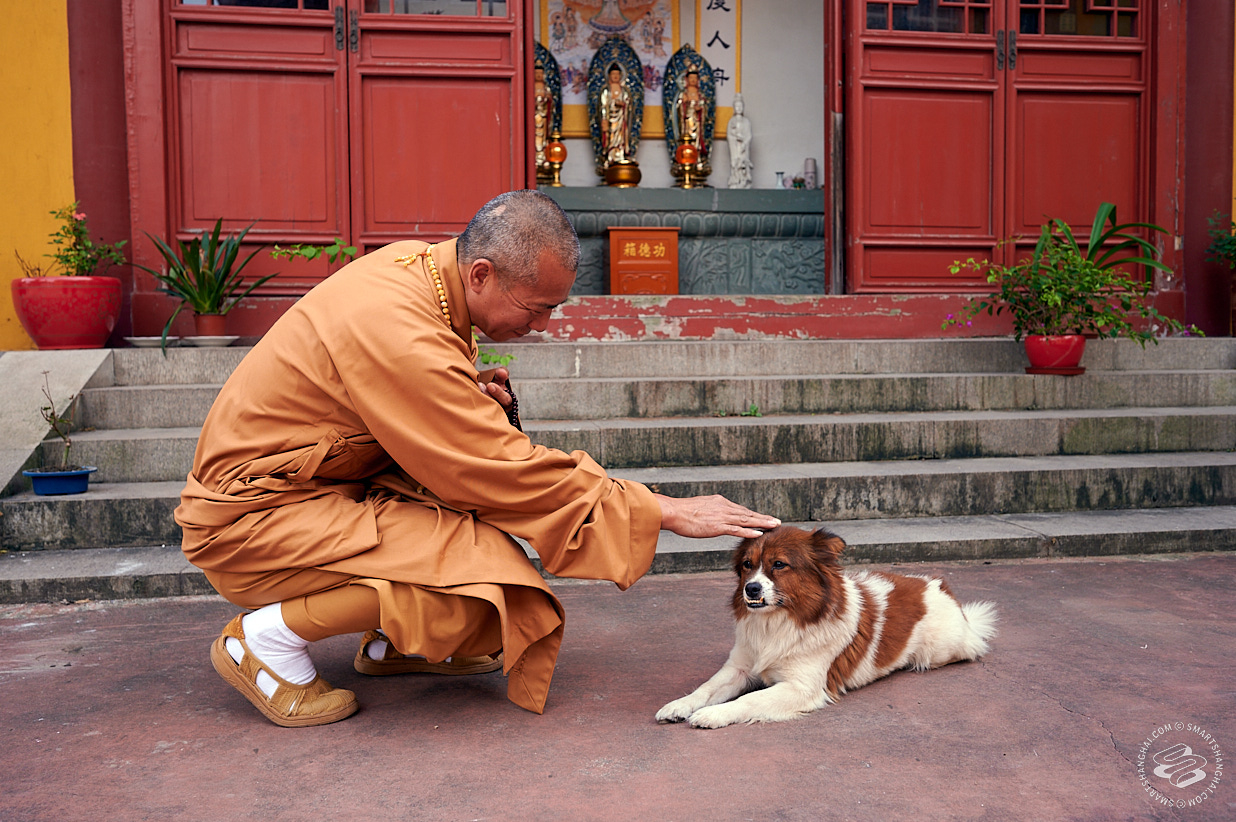 My dream was to run a bigger shelter in rural Ningbo. I wanted to grow fruit trees in an orchard and have the dog feces fertilize the trees. I had borrowed 1.3 million rmb to pay for a 35-year lease on a huge orchard but it didn’t work out. People with malicious intentions painted an exaggerated picture to the people in charge of that area, and I had to walk away from the project.

So in 2019, I rented this shelter in Dagang, Pudong, where they would let me keep animals. It’s 9,000 square meters; rent is about 1,570,000rmb a month. I have seven people working there. We go through one ton of dog food every day. There are about 5,000 dogs and it costs three rmb to feed a dog for a day. You do the math, you figure out how much it costs. 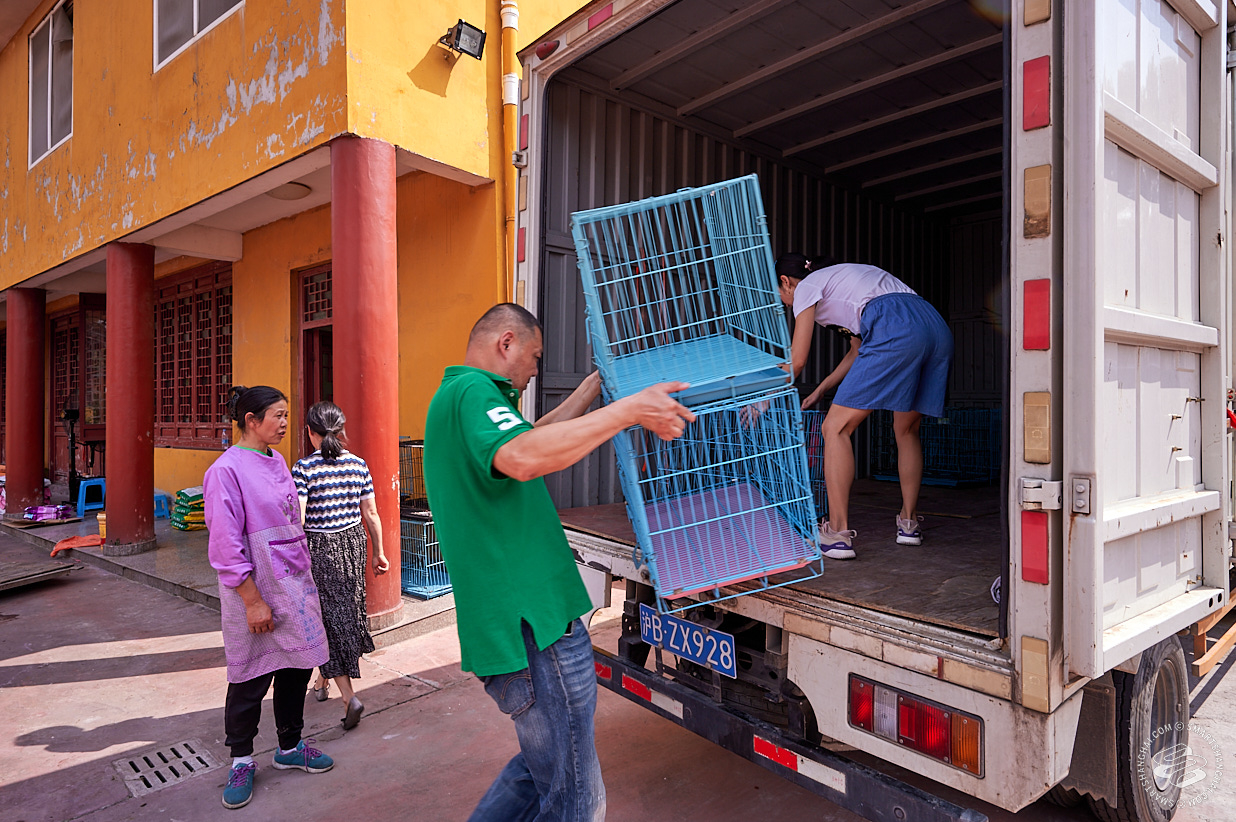 I never worry about people questioning my credibility. Years ago, I rescued a dog that was blind in both eyes, named Xiang Xiang. I didn’t have any money to pay for a vet but one of the donors of Bao’en Temple offered to help out. I asked her to take Xiang Xiang to any vet clinic she wanted to. I didn’t want to point her to any place I know about, so I won’t be accused of taking kickbacks.

Over decades, I’ve identified all the possible loopholes and I’ve figured out how to avoid them. Volunteers run the finances for the shelter, and you can trace every expense.

There are other monks and staff helping with the logistics of the temple, and occasionally I go out and attend gatherings. I mainly do animal rescue now. The other monks in the temple are fine with it. Saving lives is a natural thing to do as a monk, and it has always been part of my faith. It has nothing to do with the difficulties I face. If it cost some money to save a life, fine, I will take it. For me, money is only valuable if spent with meaning. 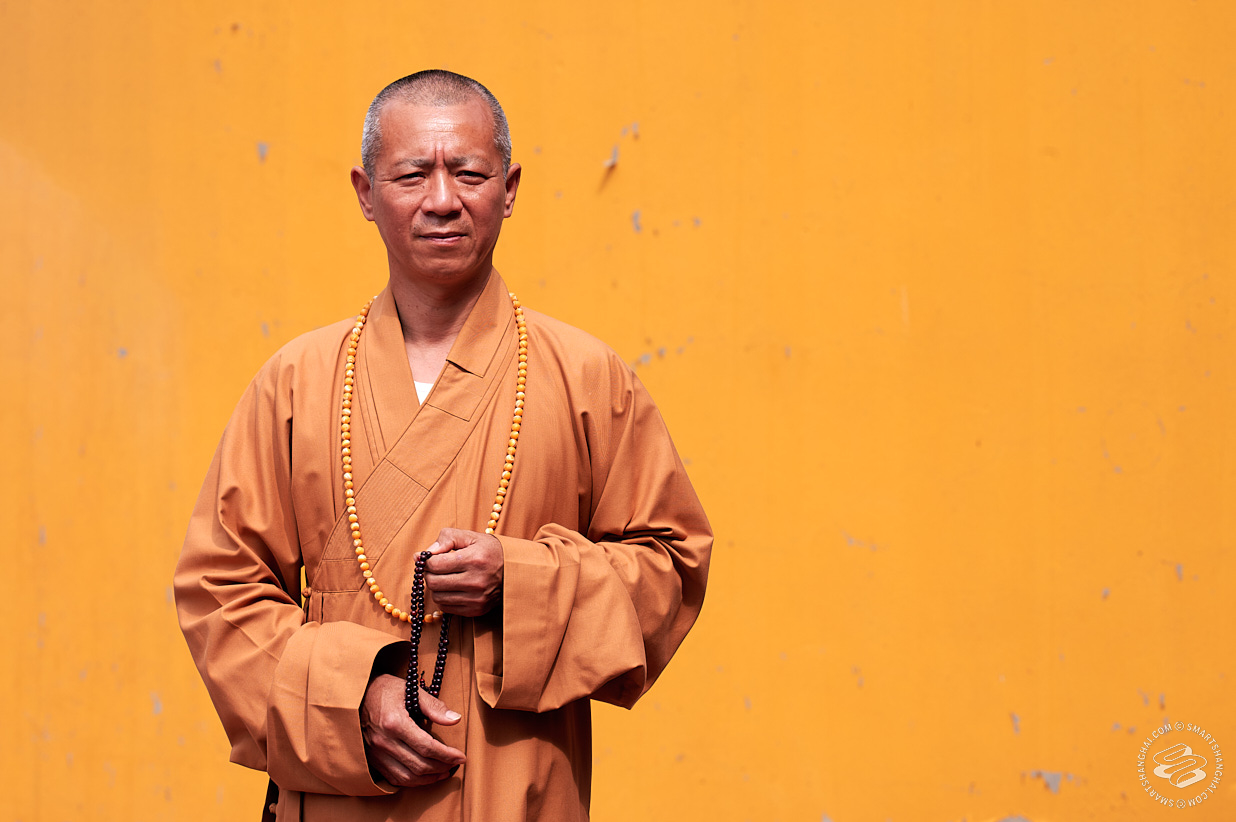 Zhi Xiang’s shelter is named Hu Sheng Yuan (护生园) and accepts volunteers and donations. Their organization also connects rescued animals with adopters overseas. They are currently looking for international travelers to take animals abroad, too. If you wish to volunteer, become a foster, or make a contribution, contact Zhi Xiang directly through his cellphone / WeChat: 13916598040, or volunteer worker Guo Zi through WeChat: ryandesign2005.

SmartShanghai has not reviewed Hu Sheng Yuan’s finances and does not make any guarantees about the veracity of Zhi Xiang’s claims, apart from spending a harrowing day with him in Fengxian at the public shelter. For what it’s worth, he has been covered extensively in Chinese media.