A Haipai History of Eating

Shanghai City History Museum exhibition peeks down the lanes of Shanghainese cuisine's origins.
By Lisa Movius
2021-03-22 12:00:00
Photos: Angela Leung
In some parts of Shanghai you can still hear their songs, the ditties of the street peddlers who used to supply the city’s denizens with door-to-door conveniences and curiosities, from books to tobacco to, of course, comestibles. These days, it’s mostly recyclers who ply the streets, and our sustenance-on-demand comes decidedly prosaically. (Though imagine if our waimai brothers did sing for our suppers?) 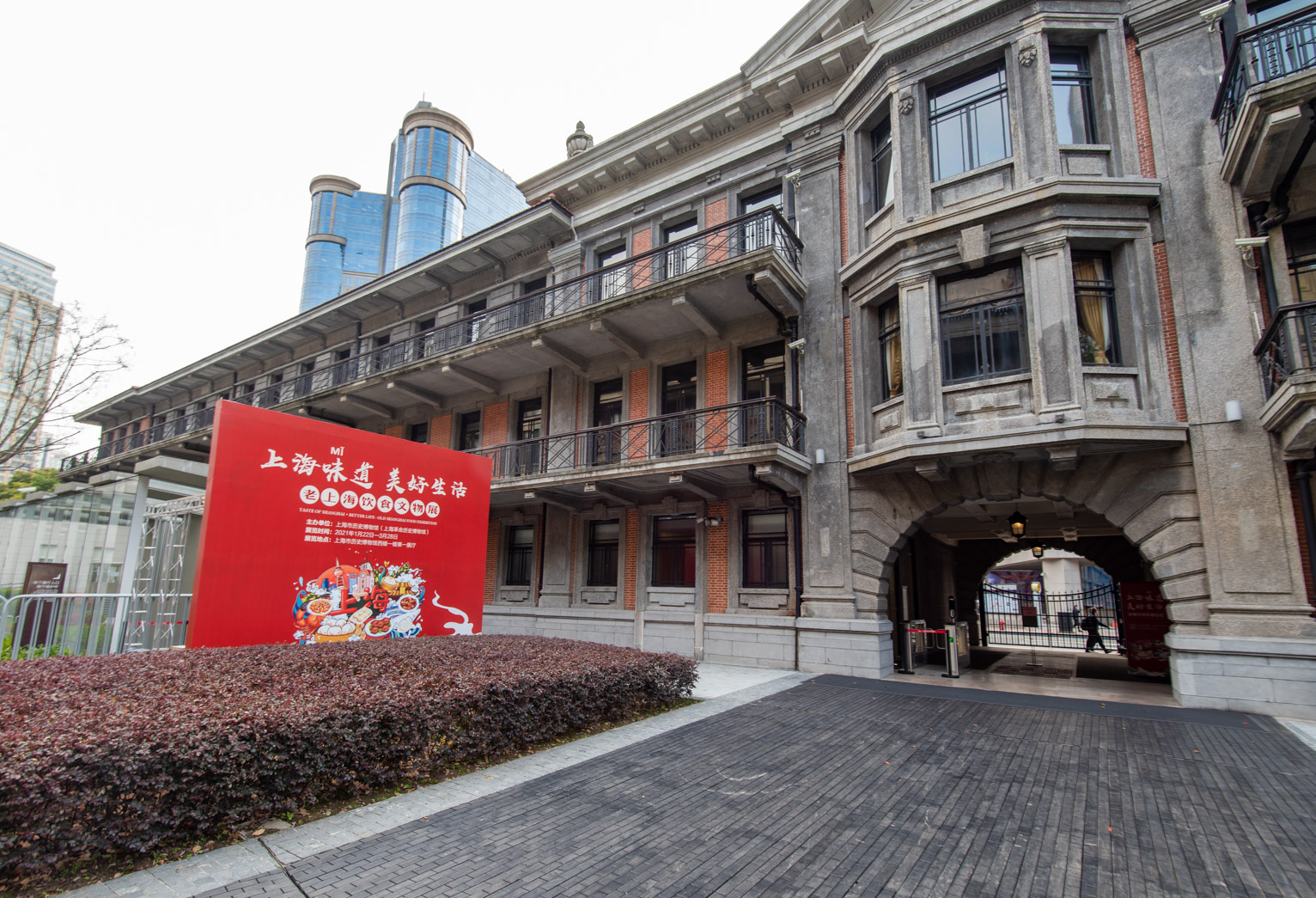 A recording of a traditional street food peddlers’ song rings out over the entrance of Taste of Shanghai – Better Life: Old Shanghai Food Exhibition, a temporary exhibition (until March 28) at the Shanghai City History Museum. The tune sets the tone for a jaunt down memory lane about how Shanghainese cuisine and culinary traditions developed over the past two centuries, centered around lane life and street snacks throughout. Move over, xiaolongbao: the Four Big Kings (Si Da Jin Gang) of the Shanghai breakfast are flatcakes, youtiao, sticky rice and soy milk. Lane entrances would have a little shop, a table or two for neighborhood gossip during the carb load; and a few neighborhoods still do. 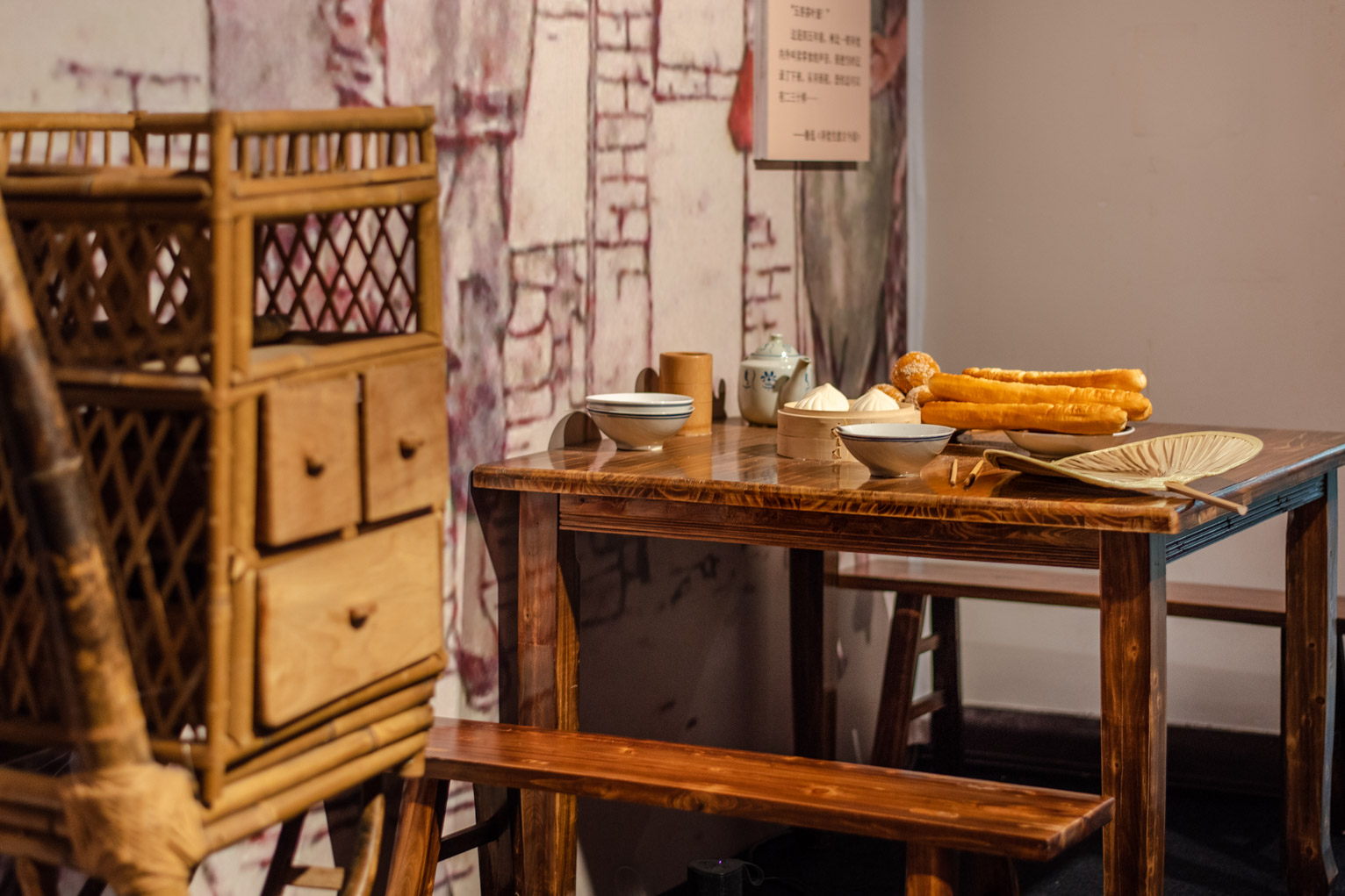 A display of early agricultural licenses and home pastry molds leads into the beginnings of Shanghainese food as we now know it. By the early 20th Century, Shanghai was moving into the modern world of branded marketing, with food no exception. Famous processed foods started being mass-produced and marketed, often with eye-popping packaging, like M.P. San & Co Biscuits, Ningbonese-owned food shop Lao Ruifengmao, and Meilin Worcestershire Sauce – one of many Shanghainese classics adapted from its international population. 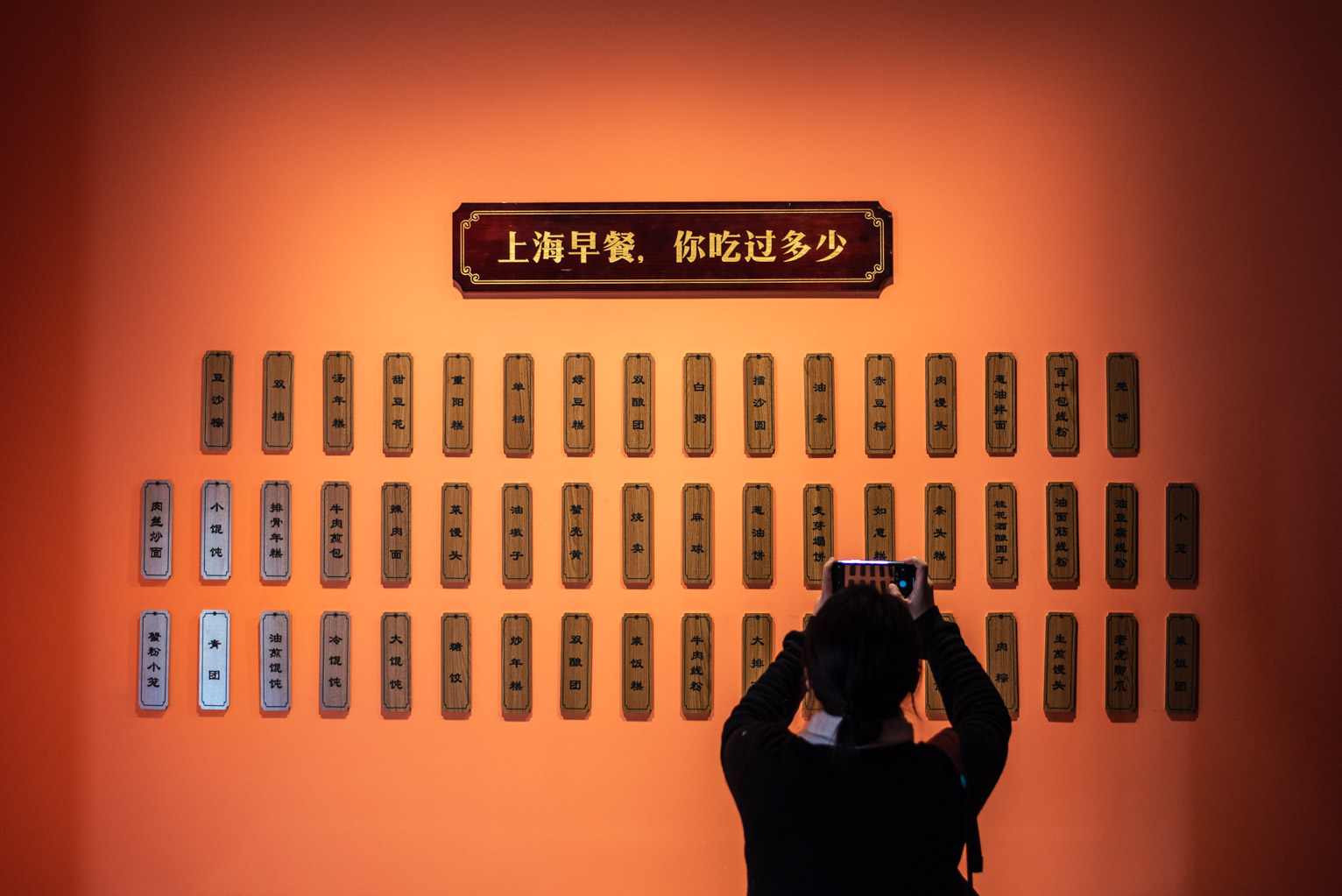 Today, order a zhazhupai 炸猪排 – pork cutlet that is breaded like schnitzel or battered and fried, perhaps served with niangao or sticky rice cakes for extra dietary decadence – and it will come with the locally-brewed Worcestershire still found in any self-respecting Shanghainese kitchen. Schnitzel, borscht, butter, coffee, cream puffs, omelets abound in Shanghainese food, and some of their origins are presented on a wall of texts plus drawings and dramatically unappealing plastic food, probably sourced from an intern’s Taobao bender. Though the visually weakest part of an otherwise sumptuous exhibition, and one of the few parts without English translations, this historical deep dive is among the more interesting sections, along with a similarly simple presentation of the basics of benbangcai, Shanghainese home style cooking. With primary derivations from nearby Zhejiang, Jiangsu and Anhui Provinces but pulling from all over China as well as the world, home-style Shanghainese is known for its sweetness as well as seasonal ingredients from the Yangtze Delta area. Easy to miss is an item about how Shanghai’s longest-running newspaper, 'Shen Pao', 80 years ago for four years or 173 issues published a weekly menu column of two meat, two vegetable dishes daily for a family of eight. A few of the menus are reproduced for perusal, but like many of the one-offs, it leaves one wishing for a deeper dive. 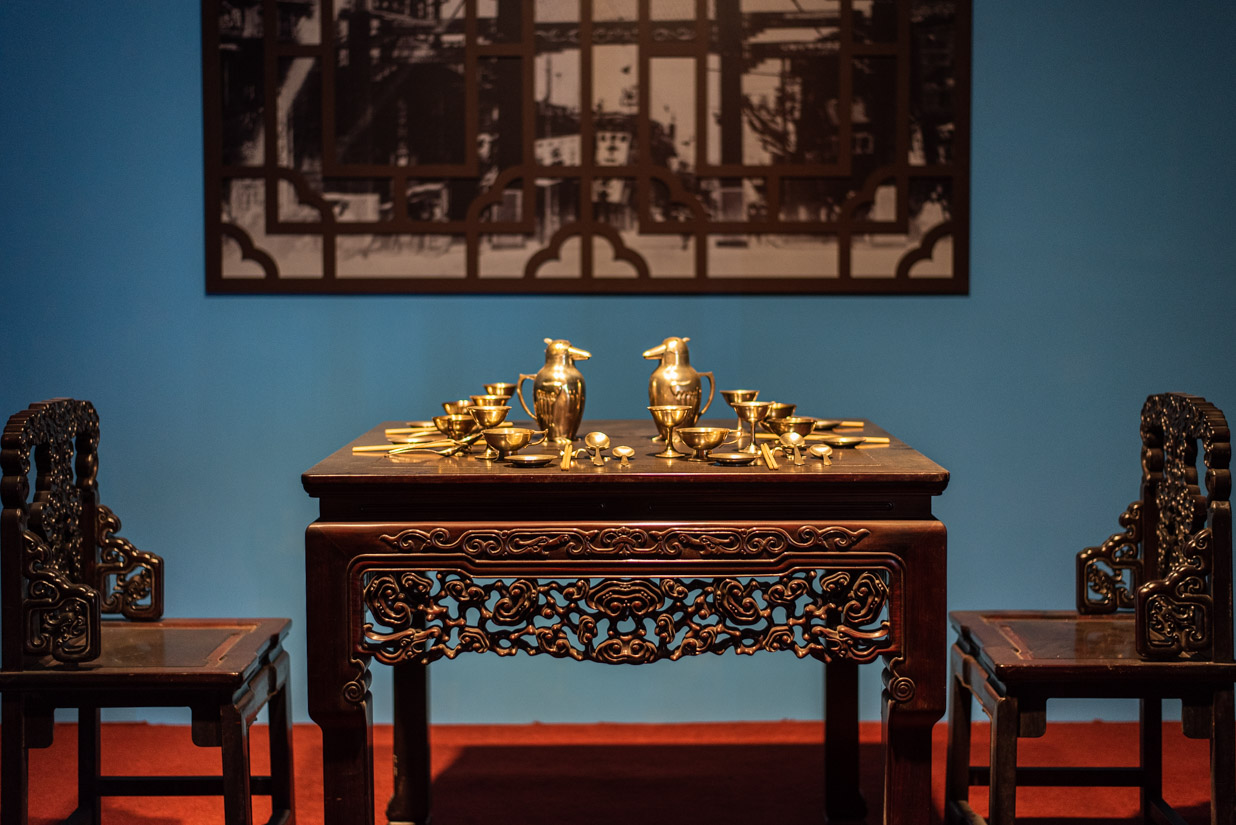 There are many such toe dips into the Worcestershire sauce, like the random quotes from Lu Xun smattered on the walls. A native of Zhejiang city Shaoxing, origin of huangjiu and stinky tofu among other delicacies that heavily (literally) influence Shanghainese food, Lu’s stories set in grogshops render some of the clearest depictions of eating culture of yore. However, we get not that impact but rather snippets of quotes. 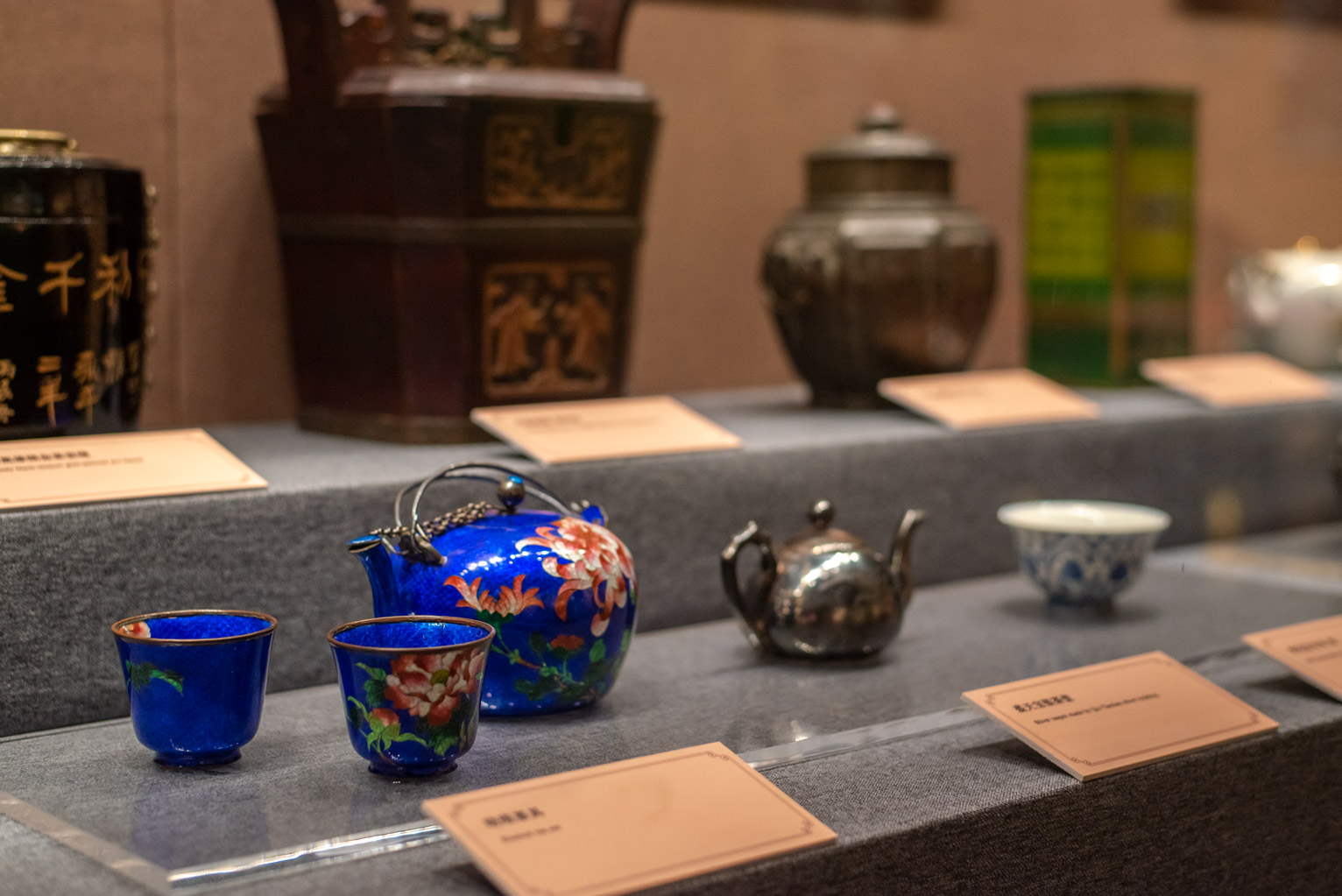 One imagines the collection of the history museum was plumbed enthusiastically for this show, and understandably grazing the greatest hits rather than presenting an elaborate meal. An ornate silverware set from the Hongyunlou Restaurant allows a photogenic recreation of its banquet table setting. Old silver and porcelain and a 1936 menu from the Park Hotel join a White Horse Whiskey mug – probably a forgotten brand rather than from the Jewish quarter café, but one can imagine. There is also a philatelist’s delight of 20th-century ration coupons, and coins some stamped in English, such as “Half Loaf – Hankow”. 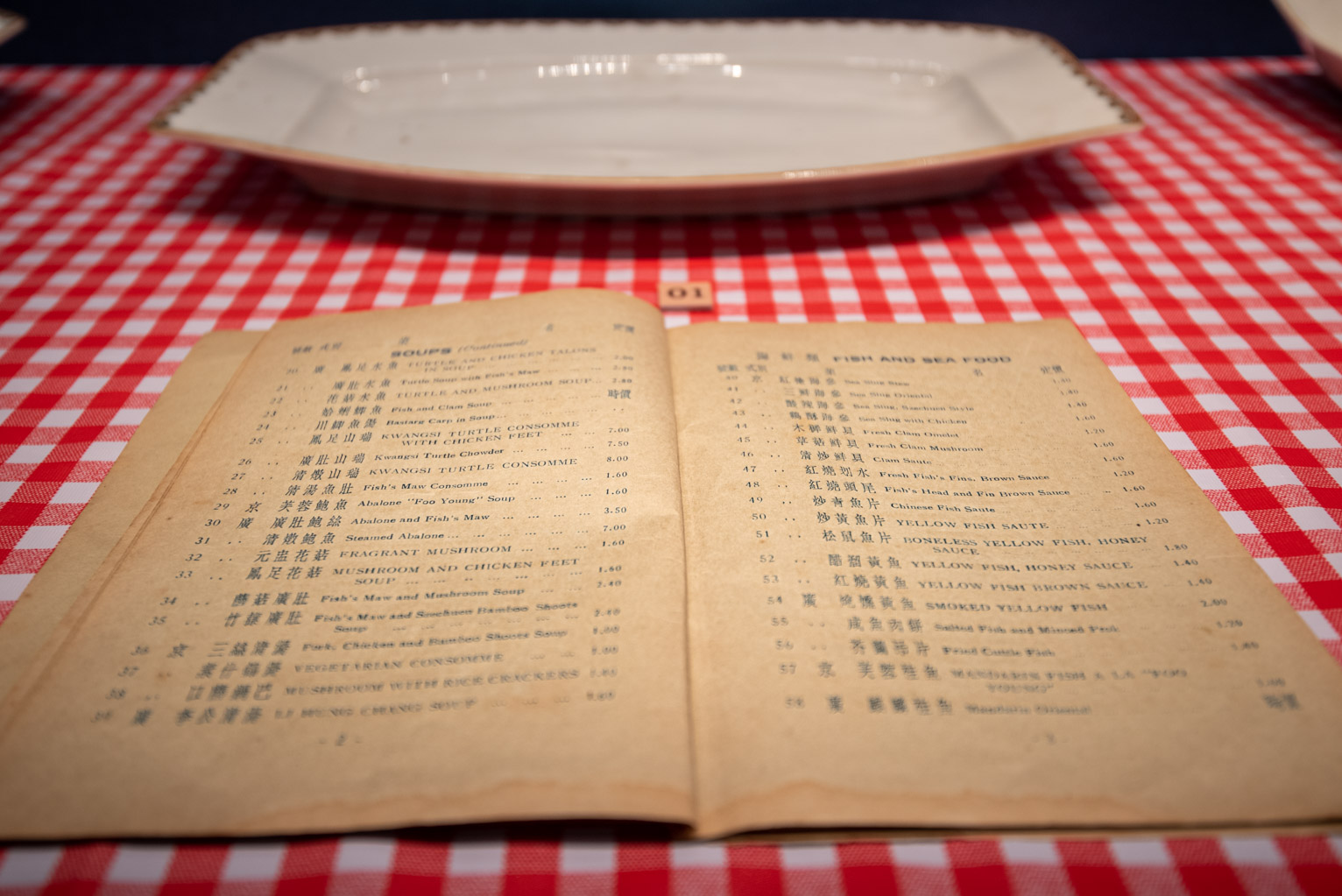 A recreation of the family dining table style popular in the 1970s and 1980s adds to the cheerful nostalgia factor, leading into another of an old school Shanghai-style café, with the red checkered cloth and bright cakes that are such part and parcel of the tradition here. Photos of old cafes join an itemization of Shanghai cafes in the 1930s and ‘40s. Teahouse culture also gets a rendition, along with the introduction of the dairy industry to Shanghai, a hint at the jockeying of beverage culture that continues to this day. 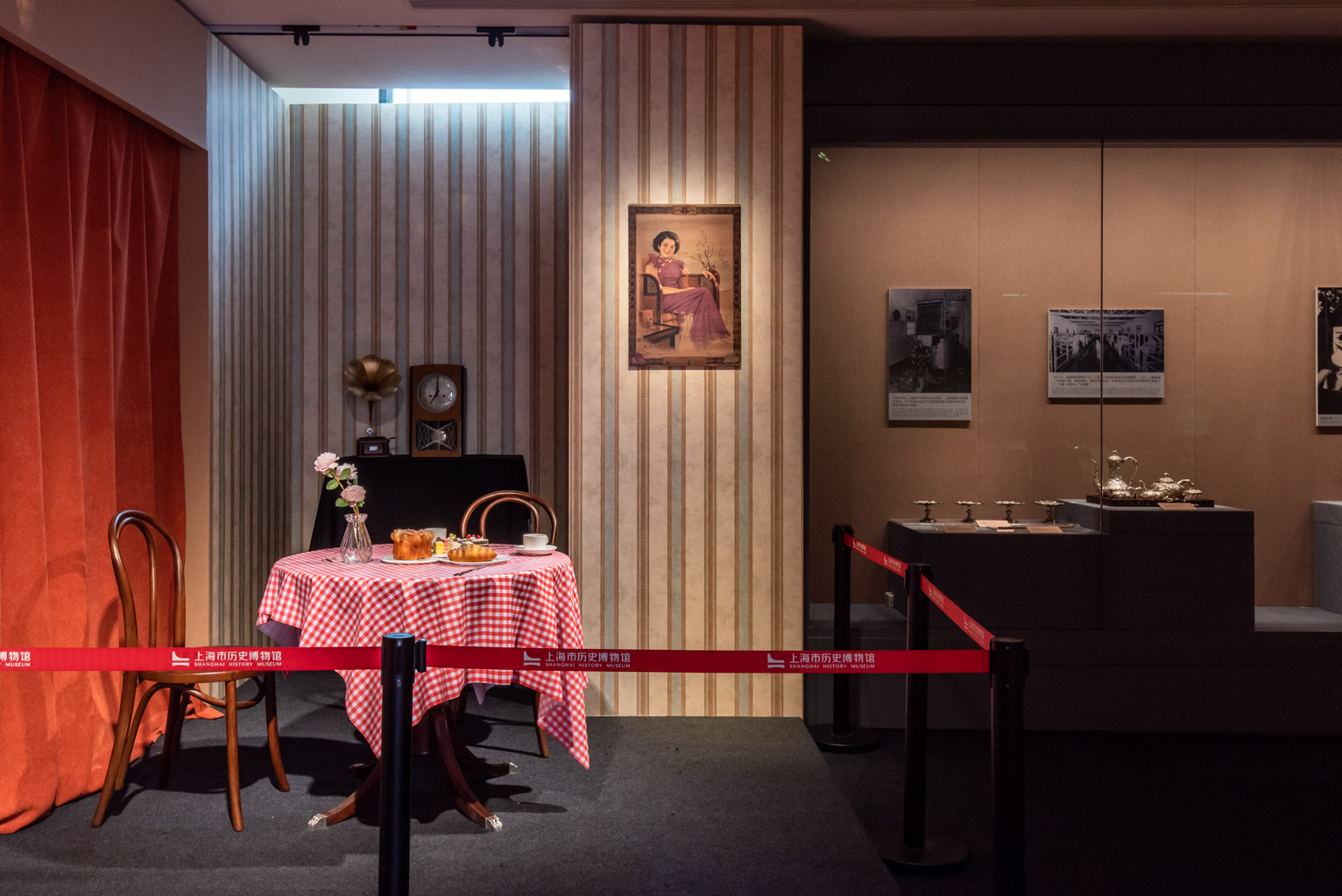 The show wraps with a cute six-minute video of street scenes and dapper “lao kele” or “old color” well-dressed old Shanghainese men enjoying their coffees. Next to it, the inevitable selfie spot with various foods, none of them Shanghai cuisine relevant and probably another intern Taobao-ing, printed on enormous pillows to pose with. Like any good sampler that leaves one hungry for more, Taste of Shanghai might set visitors salivating for the real things, which are never far off. A block west of the museum on Nanjing Zhong Xi Lu is Deda, a traditional Shanghainese-style Western fusion restaurant. Originally opened in 1897 in Hongkou, its most famous more simple and charming original location (from 1949) on Sichuan Bei Lu by Nanjing Dong Lu met the wrecking ball a few years back, this spot leans elegantly into the nostalgia factor, serving your schnitzel and borscht and coffee with only a bit of a tourist markup. A block east, the Park Hotel still sells its Western-inspired butter cookies from its “deli” on the Huanghe Lu side, with a constant queue for people wanting them fresh from the oven. (They are also packaged and sold widely around town now.) 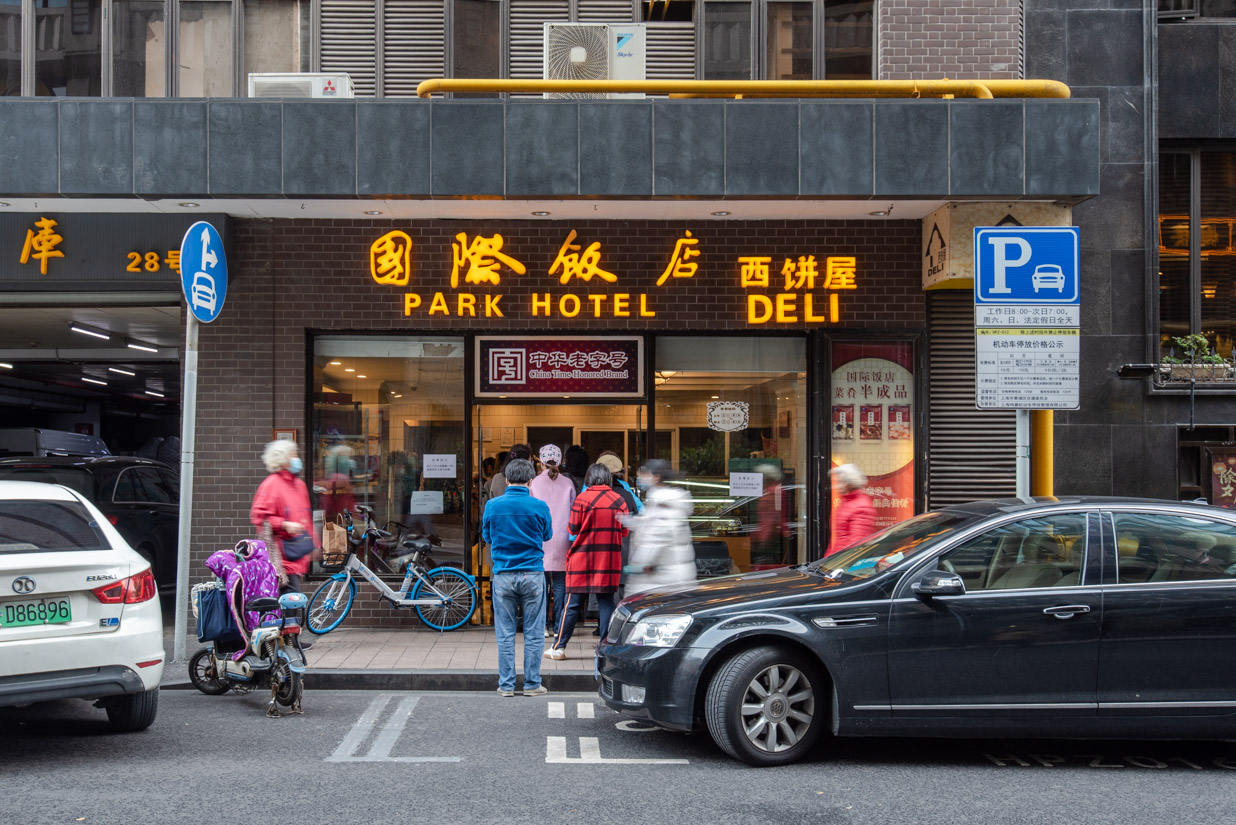 Past the Park, the vernacular architecture of the 90 is alive on Huanghe Lu, if the street food it was once famed for is less so. Its most celebrated originals Jia Jia and Yang’s remain, but with both now corporate chains with outlets plopped into every mall, their streetside magic is dimmed. More authentic Shanghai benbangcai and street snacks can be found south of the museum down Huangpi and Weihai Lu, such as at traditional dianxin shop Dong Tai Xiang, at Chongqing Bei Lu and Dagu Lu. Hundred Year Shops have become a brand in Shanghai, and all around town there are newer or less new locations of restaurants peddling the Shanghainese classics. Try De Xing Guan on Guangdong Lu or New Richards on Guangyuan Lu. Or just search on your waimai app and sing over your schnitzel.

Interested in learning more about the world, or at least the history of Shanghai? Click here for SmartShanghai's Museums Directory.