Visiting Virtual Versailles: The Screen-Based Journey Through Time (to 1682, or 2019)

Rendition of historic palace is a hors d'oeuvre not an entrée for the travel starved.
By Lisa Movius
2021-03-03 12:00:00
Photos: Angela Leung
The full spirit of Virtually Versailles – Infinite Imagination, an interactive show in the lower basement of Xintiandi Style Mall, was best exemplified by a certain older Shanghainese gentleman at the preview on February 27. Toting, for reasons only known to him, a practical little wheelie suitcase, he cut through the crowds of selfie-snappers with airportesque efficiency. 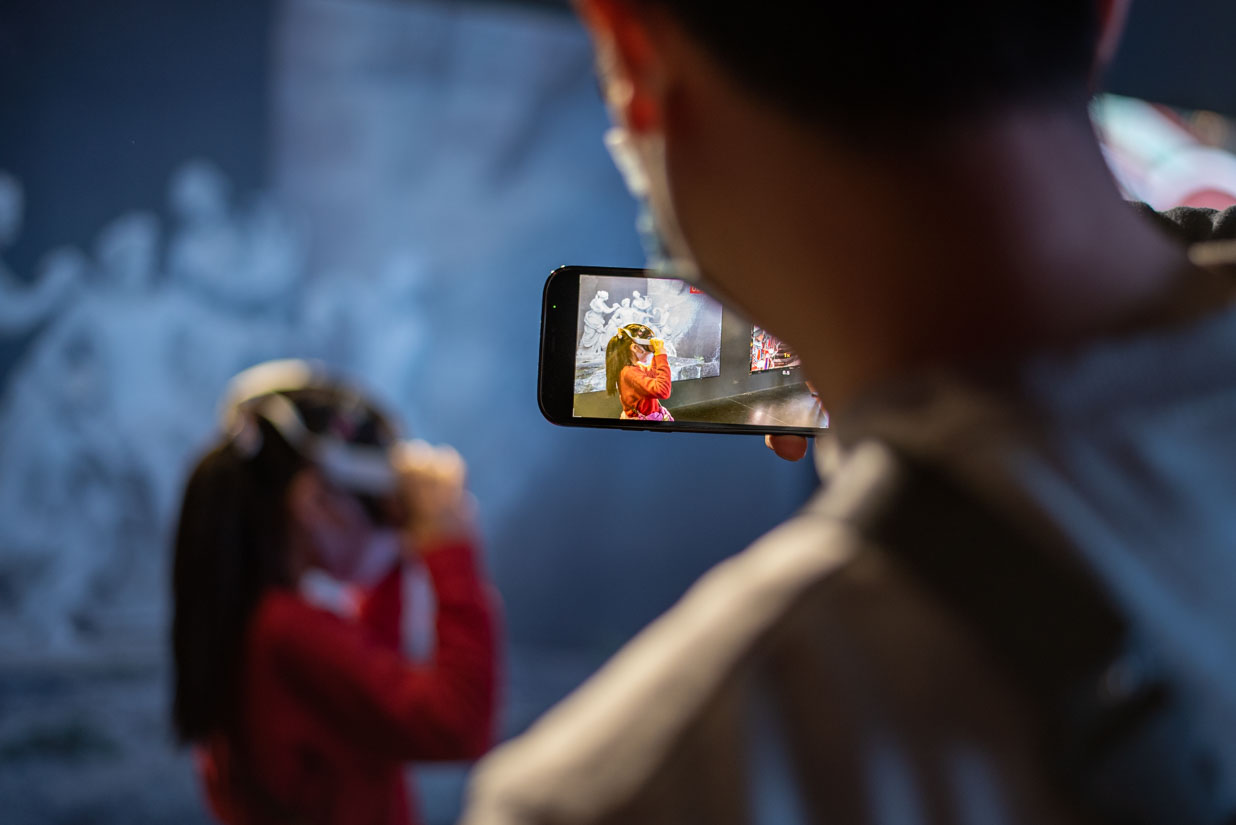 Digitized dreamscapes are, for many of us, the best facsimile of global travel available these days. While it would take an extra dose of imagination to find Virtually Versailles truly transformative, it has its charms. Projects like this previously had a certain marketing and edutainment cache; now, when the real venues are unattainable to travelers and often closed even to local audiences, they provide a certain watered-down substitute. 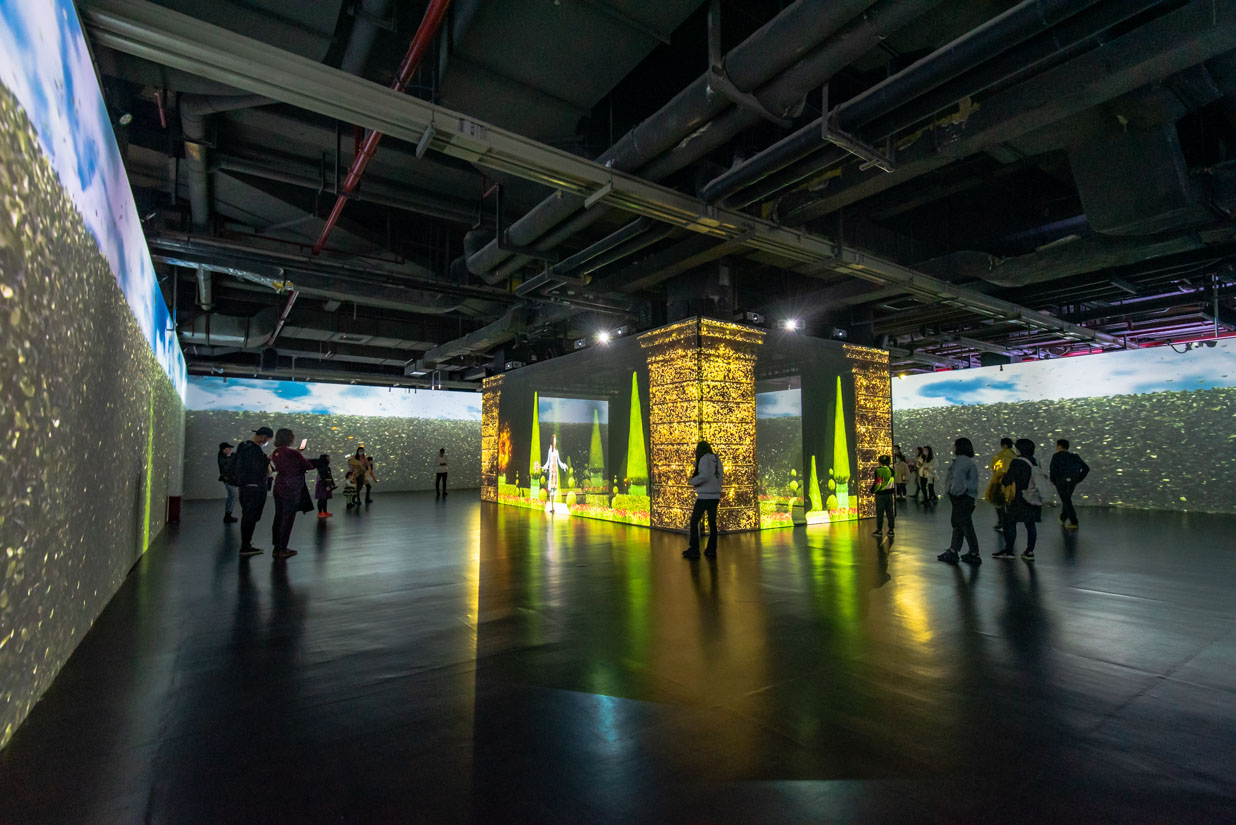 Virtually Versailles actually predates our current Covid times: it debuted in November 2018 in Singapore, where it ran for five weeks at the Ion Orchid Mall. This Shanghai installment of Virtually Versailles runs until May 10, followed by tours to seven other mainland cities, and its 2,500square meters spreads over 12 sections. More is not more: the beautiful presentations and historical insights are interspersed with the gimmicky and the awkward, like a mirrored hallway infused with an overpowering chemical lavender infusion. 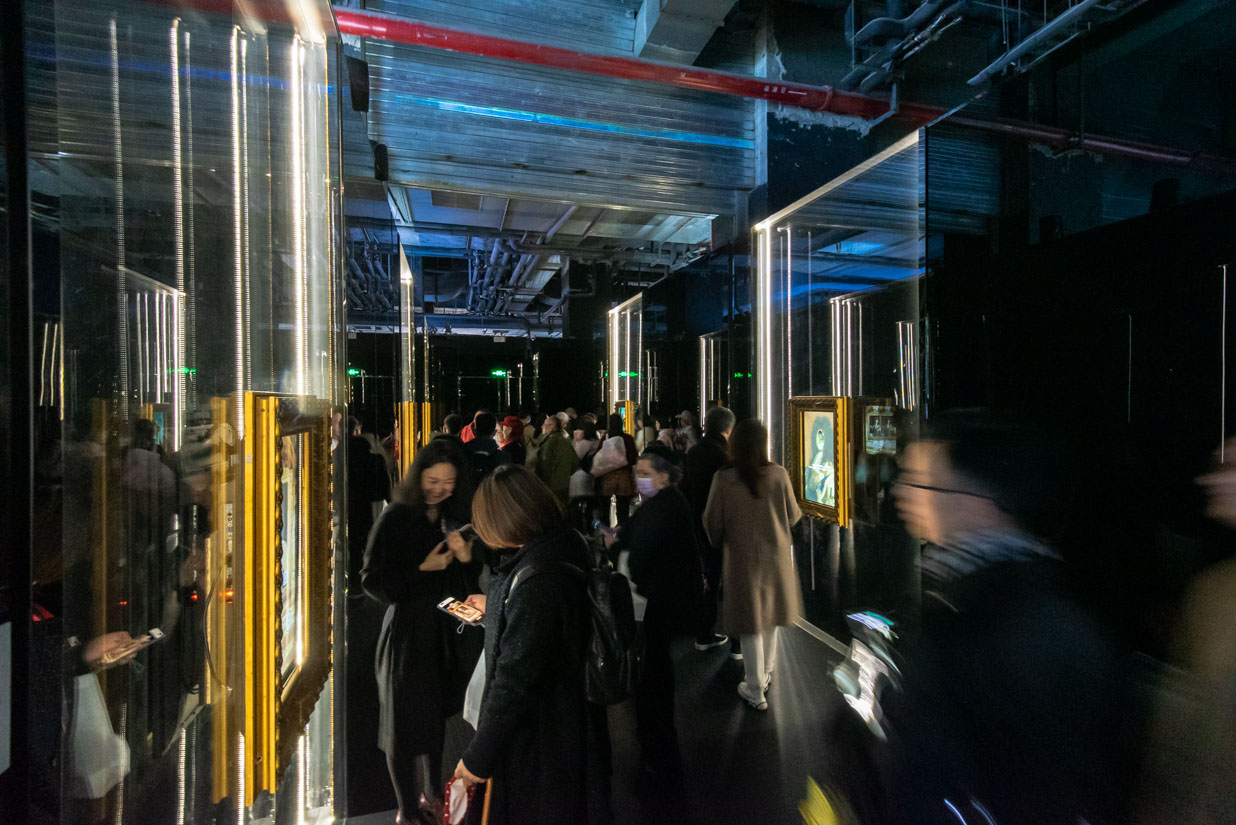 This edition is backed by the Palace Museum and National Estate of Versailles itself, along with local culture industry company SR Culture & Arts and dairy brand Guangming, with support from several other partners including Xintiandi and Google Arts & Culture.

History Through the Reflecting Pond Versailles and its glamorously doomed denizens occupy a lot of space in the public imagination as well as Western popular culture, but rarely going deeper than the glitz and the gore. While Virtually Versailles provides a solid basic introduction, the exhibition opts for style over substance. 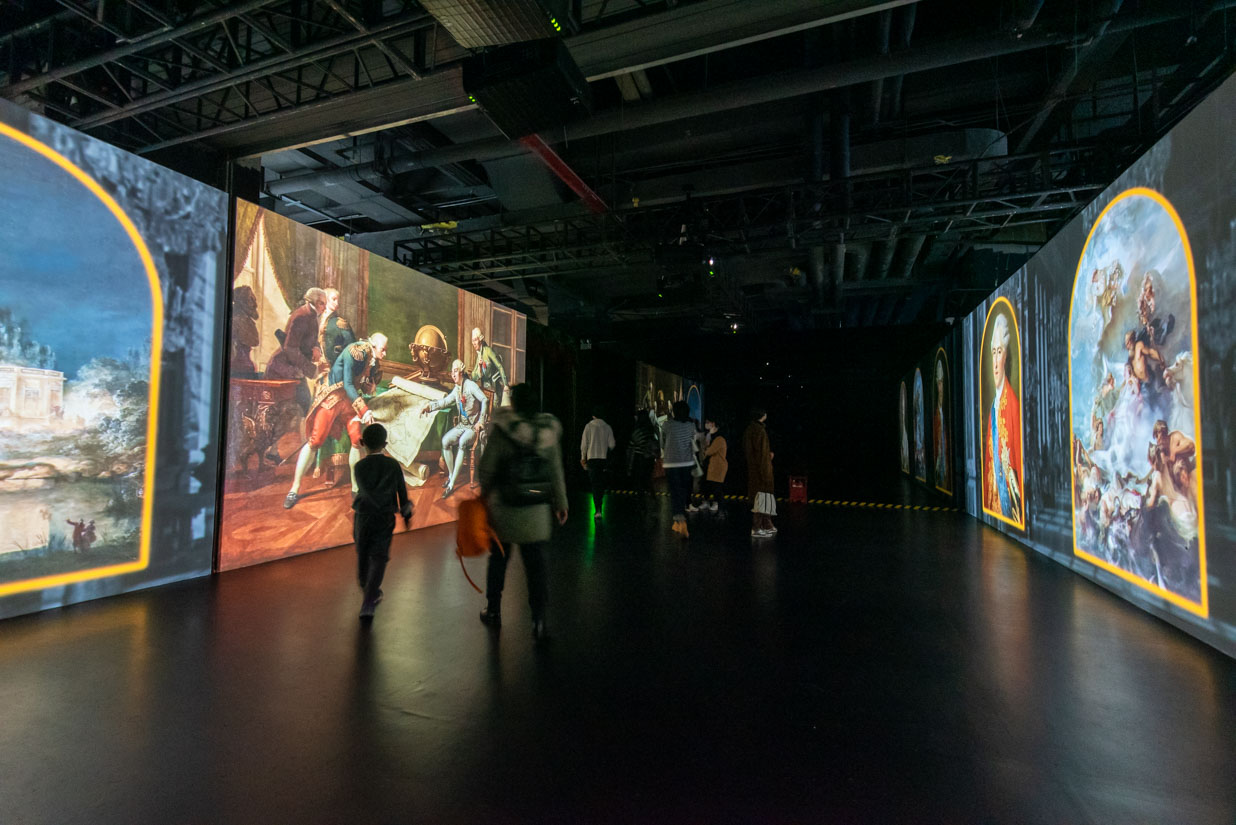 You will not hear about how the place in its heyday reeked of excrement and upwards of 10,000 bathing adverse if perfumed bodies – not chemical lavender. The deeply tragic, bizarrely cosseted life of Marie Antoinette, long before her violent end, gets no space. Nor does the wonderfully weird, nerdy side of her shy lock-obsessed (the door kind, not the watery kind) husband, Louis XVI – who his family labeled as an “ungainly” “dimwit”. His great-great-grandfather Louis XIV is presented in full Sun King mythos, with a clever (or creepy) digital exhumation of his purported voice, imagined from his health records and letters, wafting over the entrance. 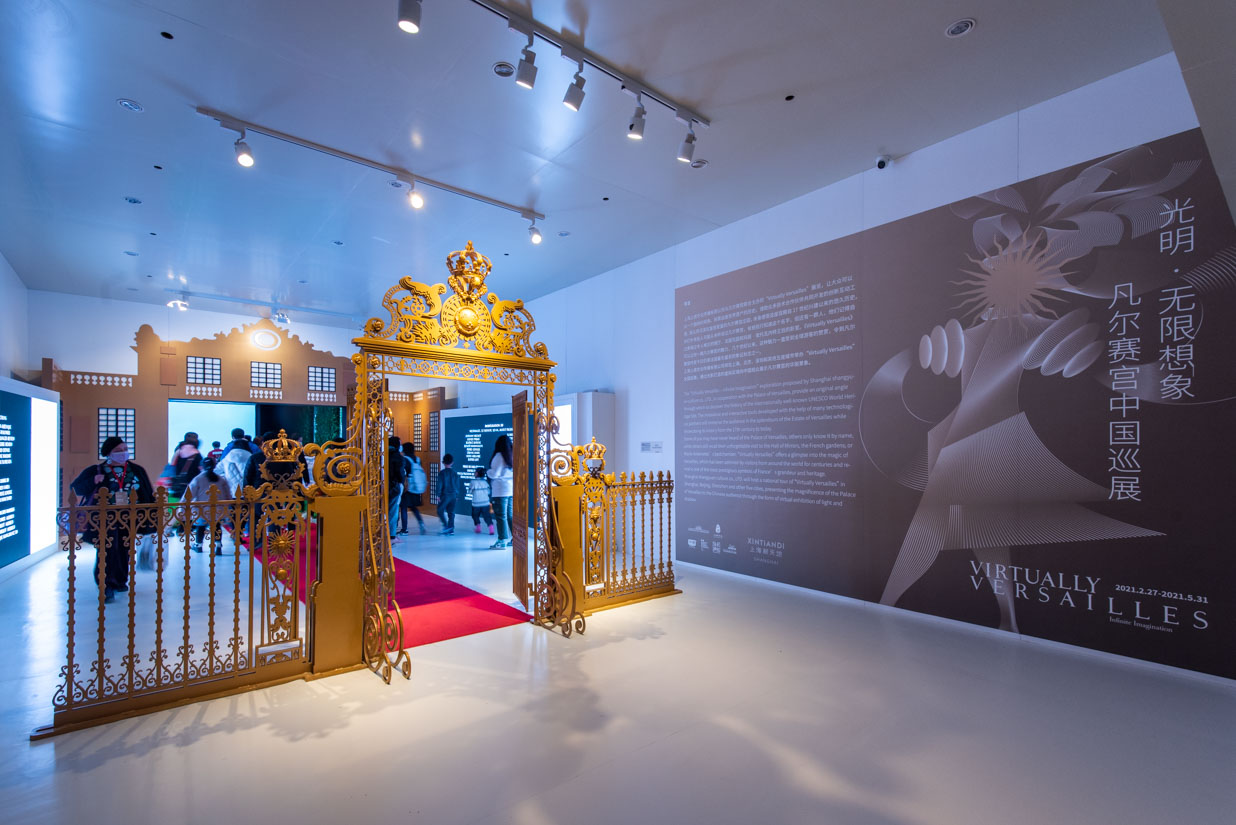 The video tour and subsequent texts present a basic history that is rather less personal and more PG13, expanding mostly on the architectural history of the palace. Built between 1623 and 1624 by Louis XIII, and expanded in 1631, it became the primary court residence under Louis XIV from 1682, followed by waves of expansion and disuse until the French Revolution of 1793. 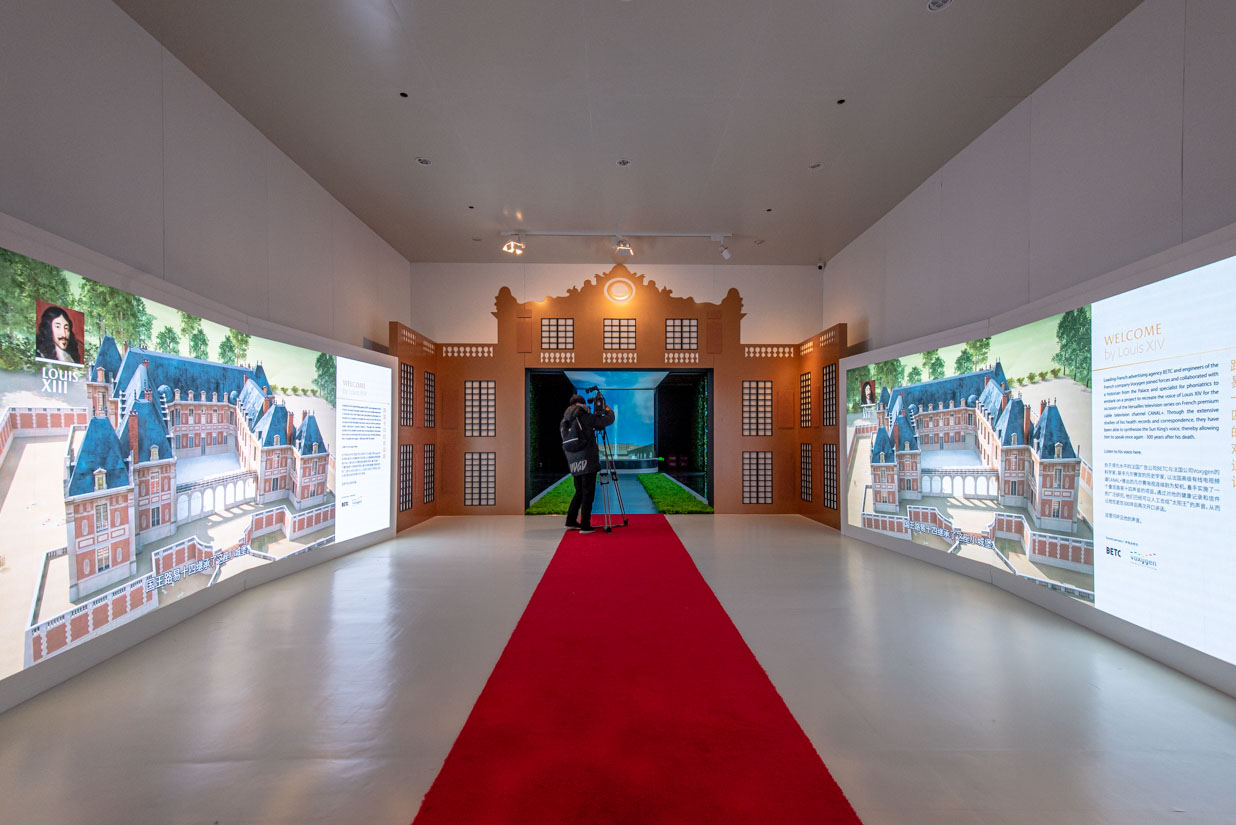 Versailles opened as a museum in 1837, providing a public monument to French culture and history during a period of national schism. After the signing of the Treaty of Versailles in 1919, ending the First World War, the royal residence again fell into disrepair until later in the 20th Century, when efforts began to restore the buildings and recover the furniture and other valuables looted during the revolution. The second room offering of three stationary bicycles in front of large screens touring through the palace grounds proved a charmingly popular mixture of low and high tech. 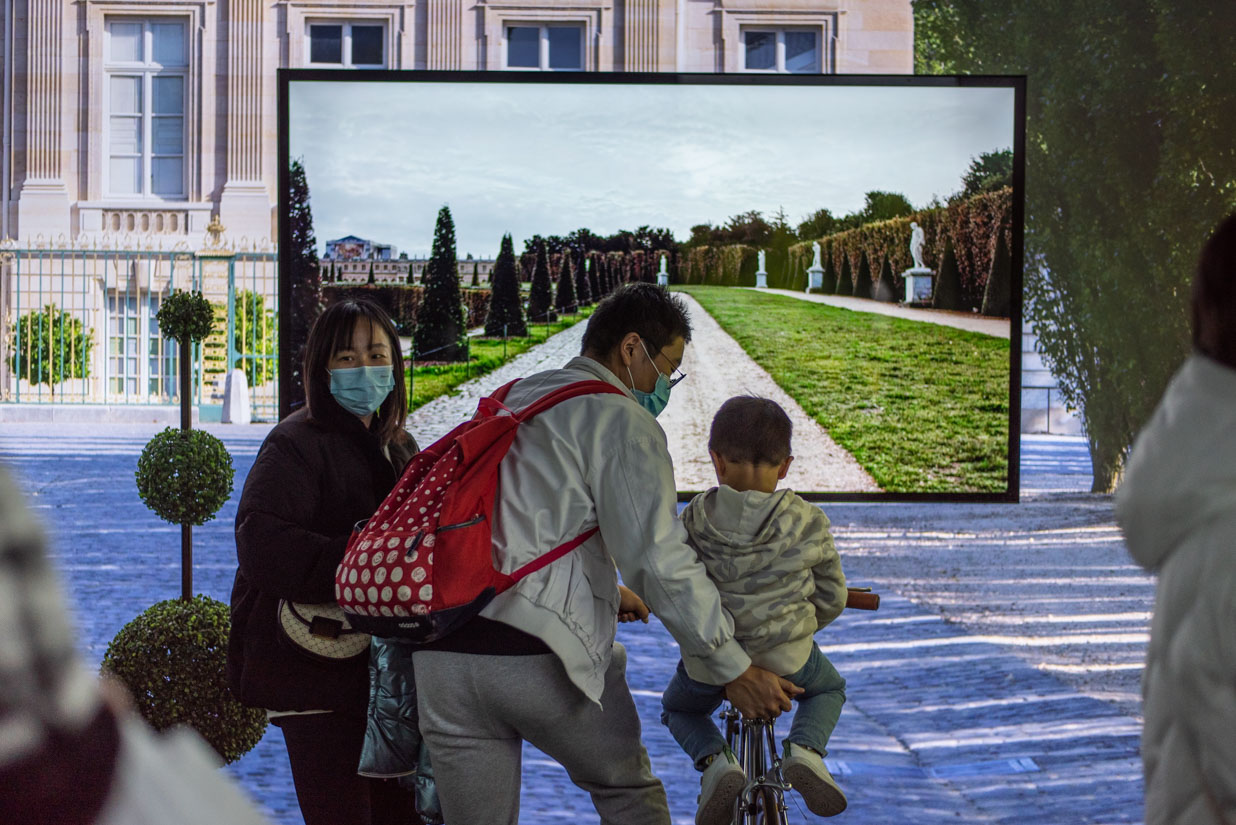 The following two sections of art-o-tainment gone awry: screens where visitors can superimpose their face onto court portraits, and wall videos of famous paintings tweely animated. If this is what it takes to bring art history to the masses, then maybe the masses do not need art history. 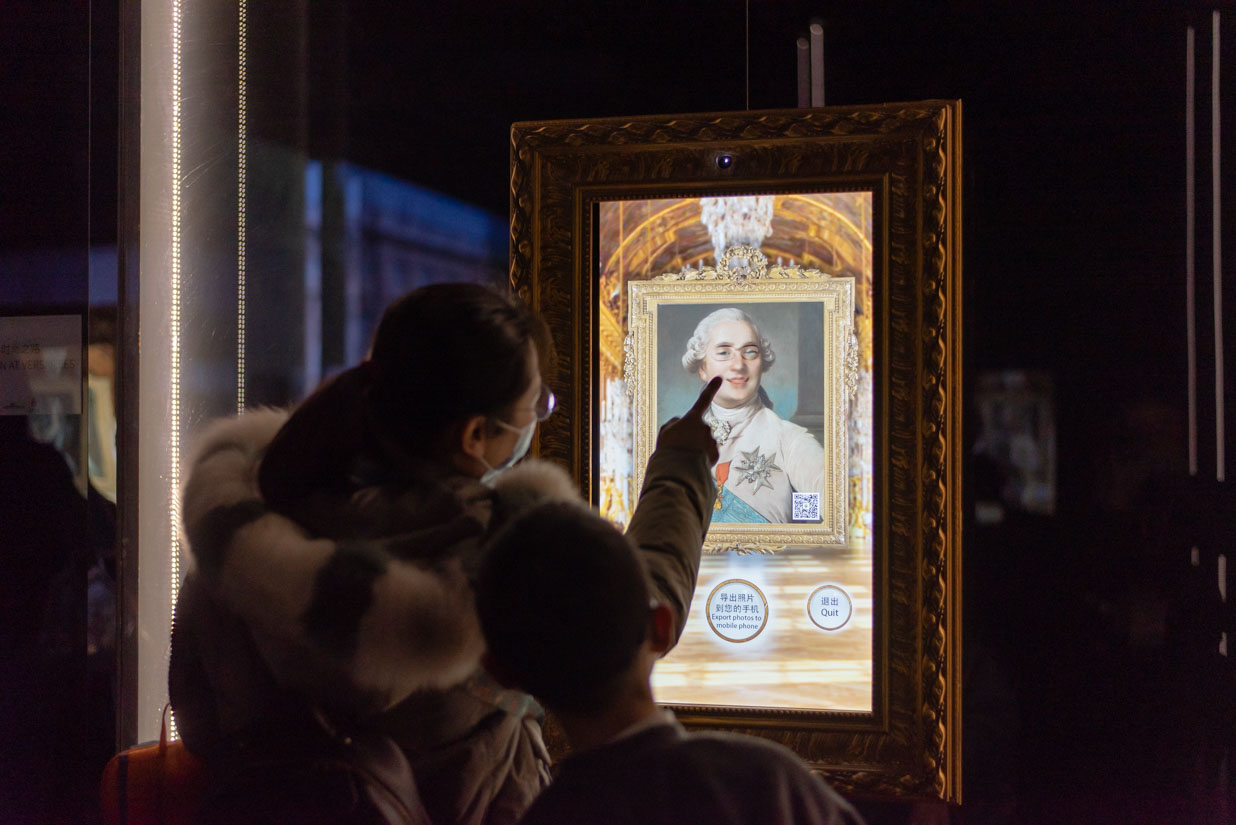 Hasten cringingly to Virtually Versailles’ real highlight: a tiny box of a room where the walls and ceilings are covered in video screens recreating the palace’s main chambers, such as the King’s Chamber, the Hall of Mirrors and the Royal Opera House. The presentation is the closest thing to immersion besides the two VR goggles offered later (without the queues). 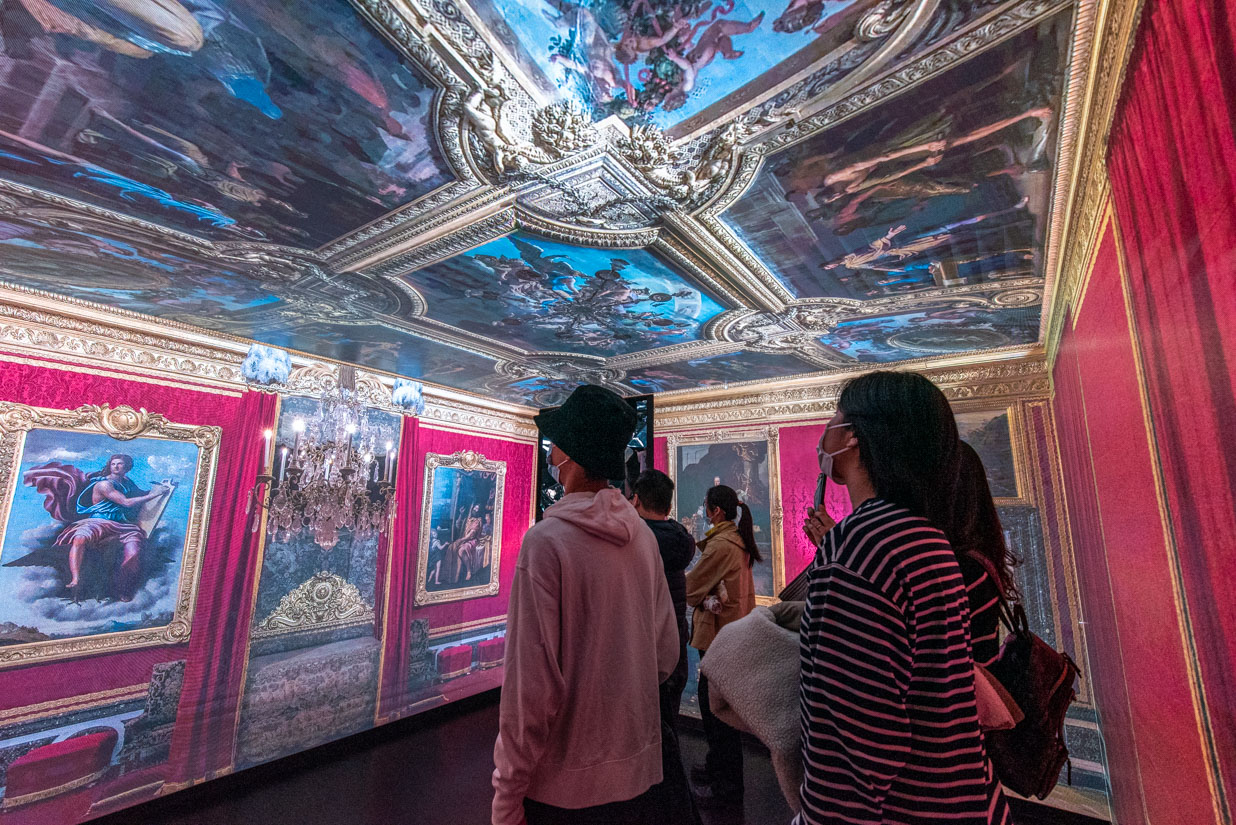 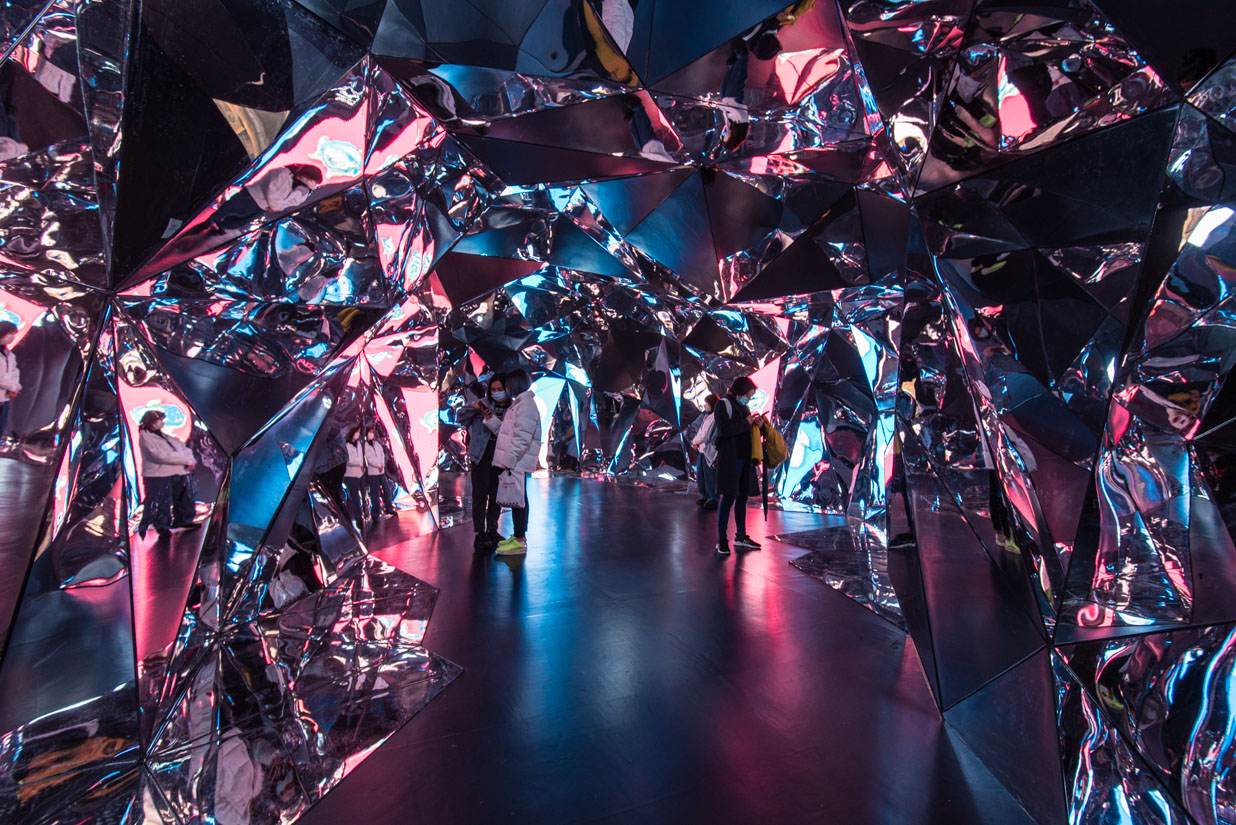 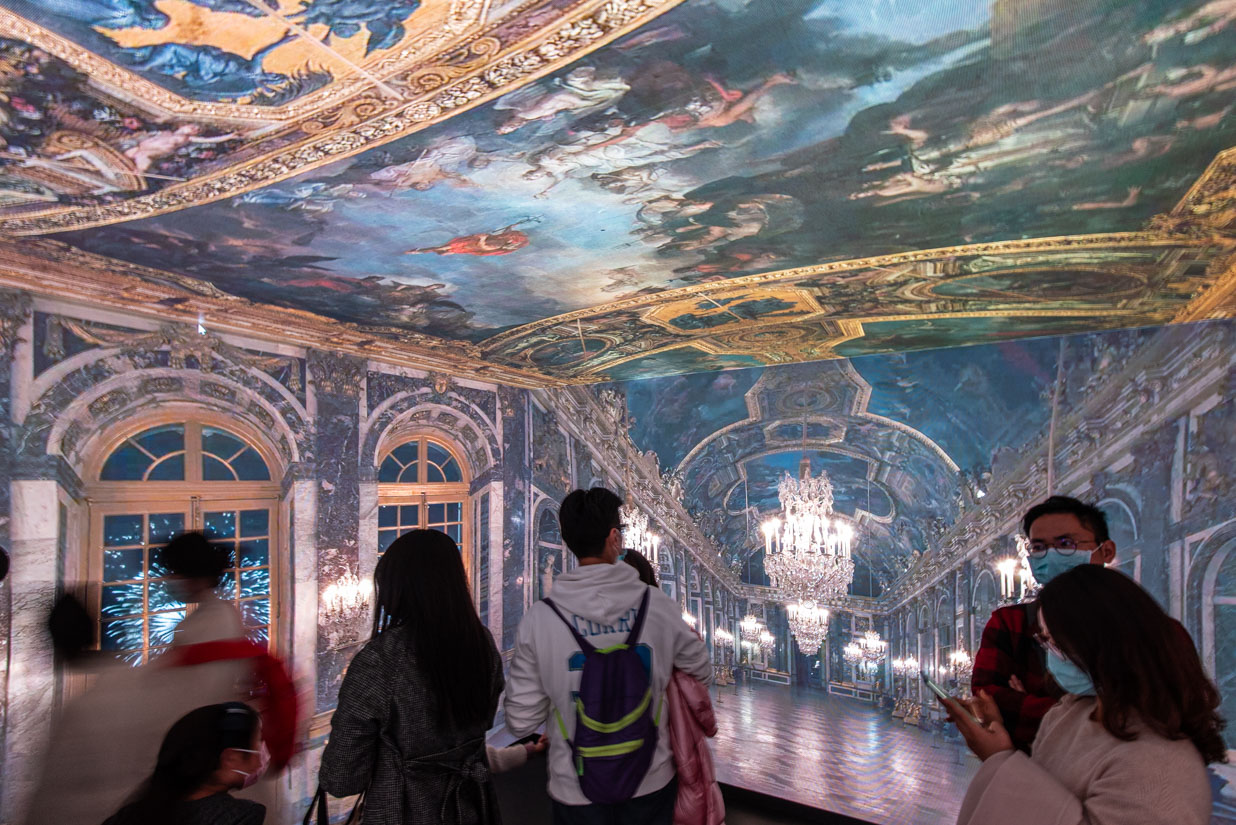 Hustle then through that weird lavender hallway into a huge room with even more wrap-around LEDs, plus another large box of screens in the middle, playing a garish holographic dance and light show. Materials claim it embodies the spirit of Versailles. Such enormous screens cost millions, and the waste of such funds and a chance to showcase real dance, art or history is perhaps truly evocative of how excess prompts backlash. 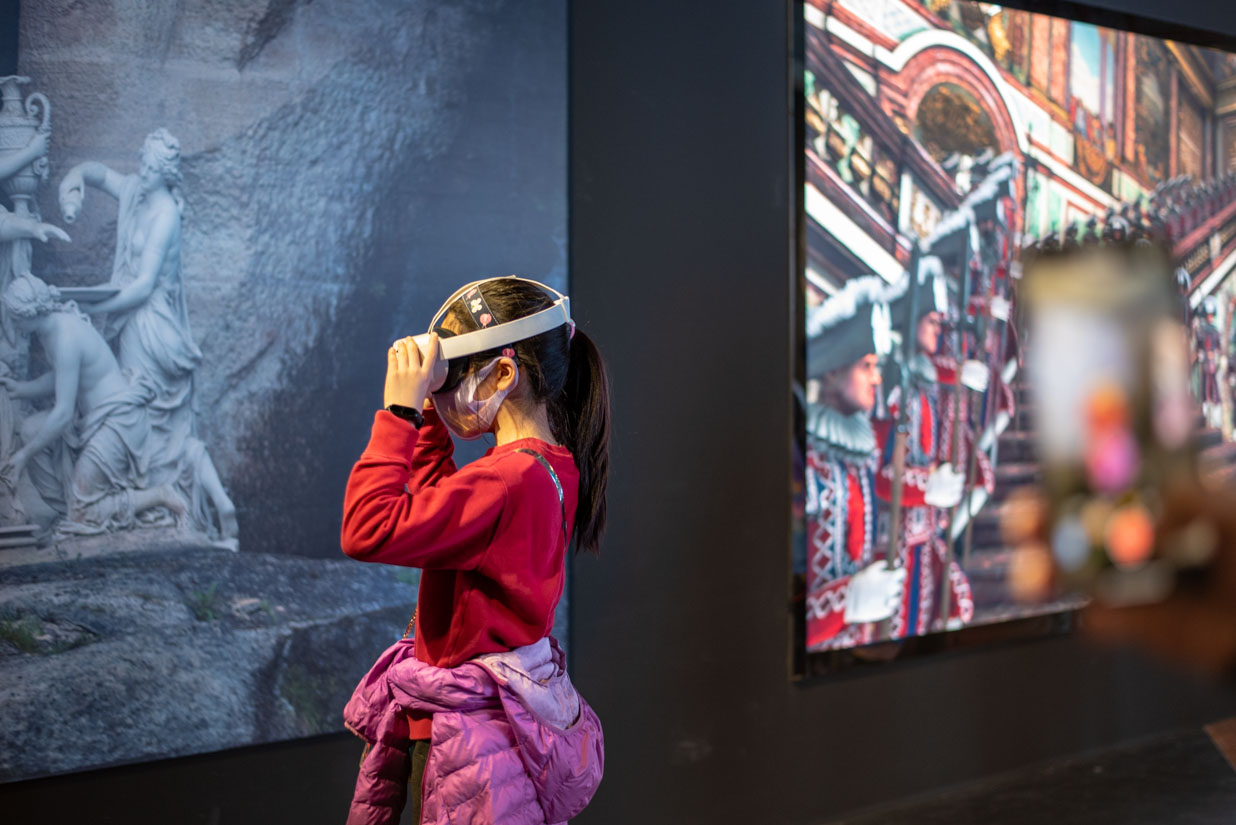 GoogleArts’ VR contribution fills the penultimate room, and apart from the spectacle of people falling over in the goggles, the contents are shown on backdrop videos. This tour is also available online. 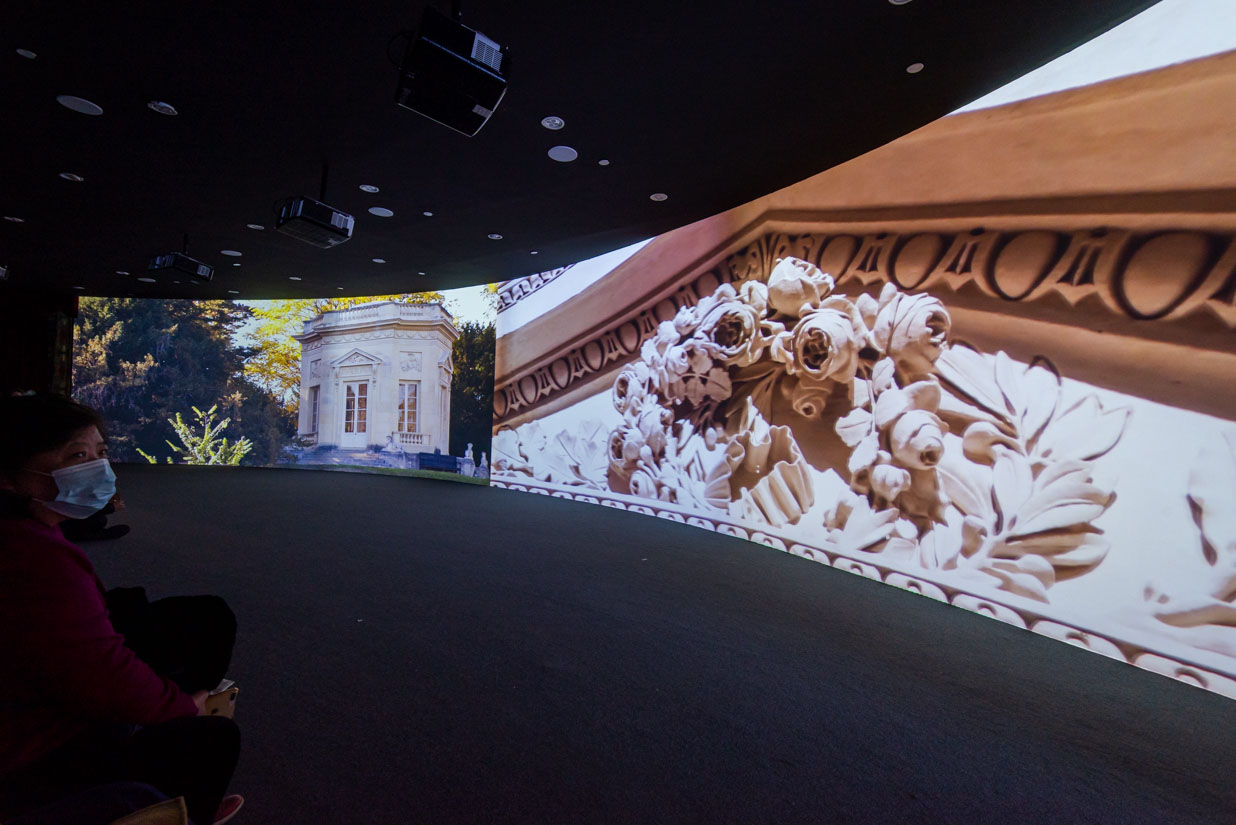 The final section returns to older tech, with a 16-meter, 180˚ curving screen showing a panoramic trip through Versailles and its gardens, with frequent zooms onto statues, treasures and architectural details. This is the place to linger, reflect and catch your breath – only to have it taken away again by the straightforward views of a spectacular place. 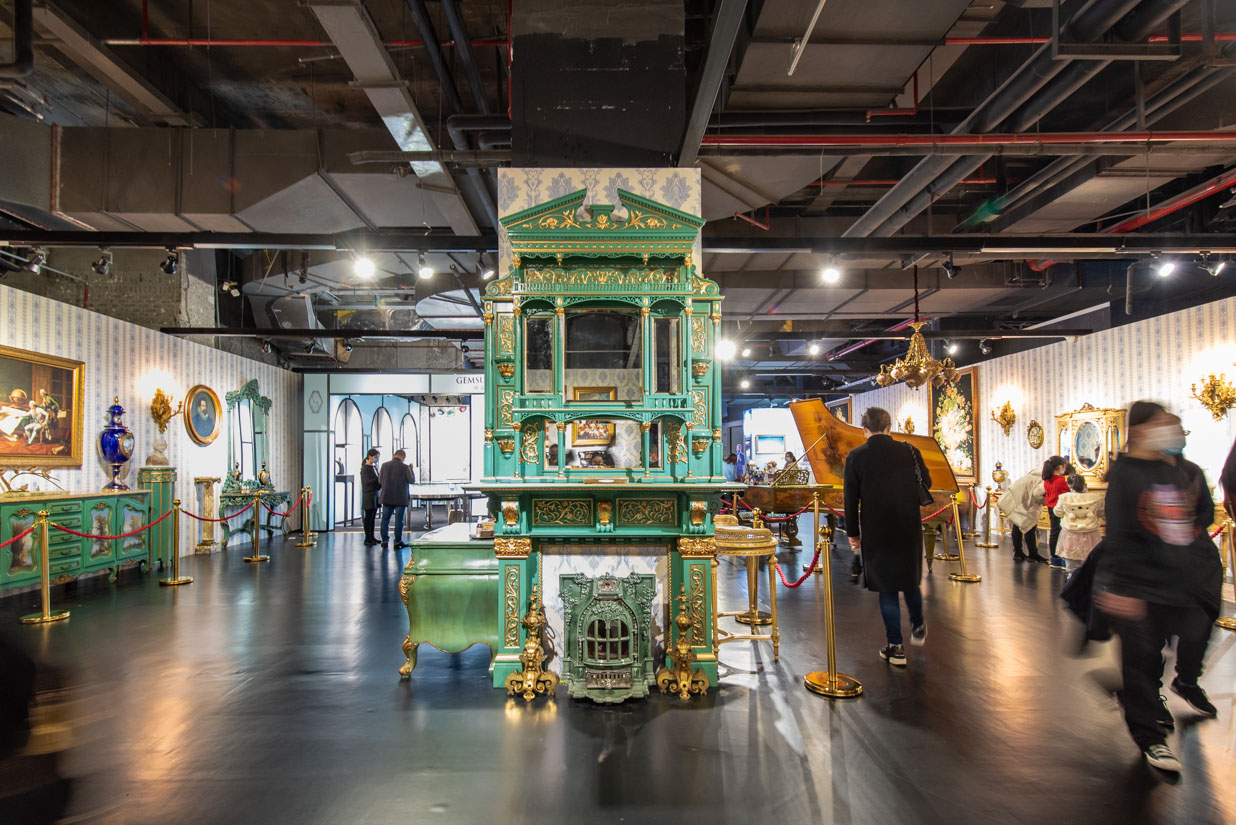 What do you get when you mix a dairy brand and a French palace? Possibly the world’s weirdest exit gift shop. The official exhibition is left through a cacophonous cavern of reproduction furniture, for selfies and possibly for sale, popups selling leather bags, perplexingly terrible folksy sculptures, and a Guangming milk kiosk. 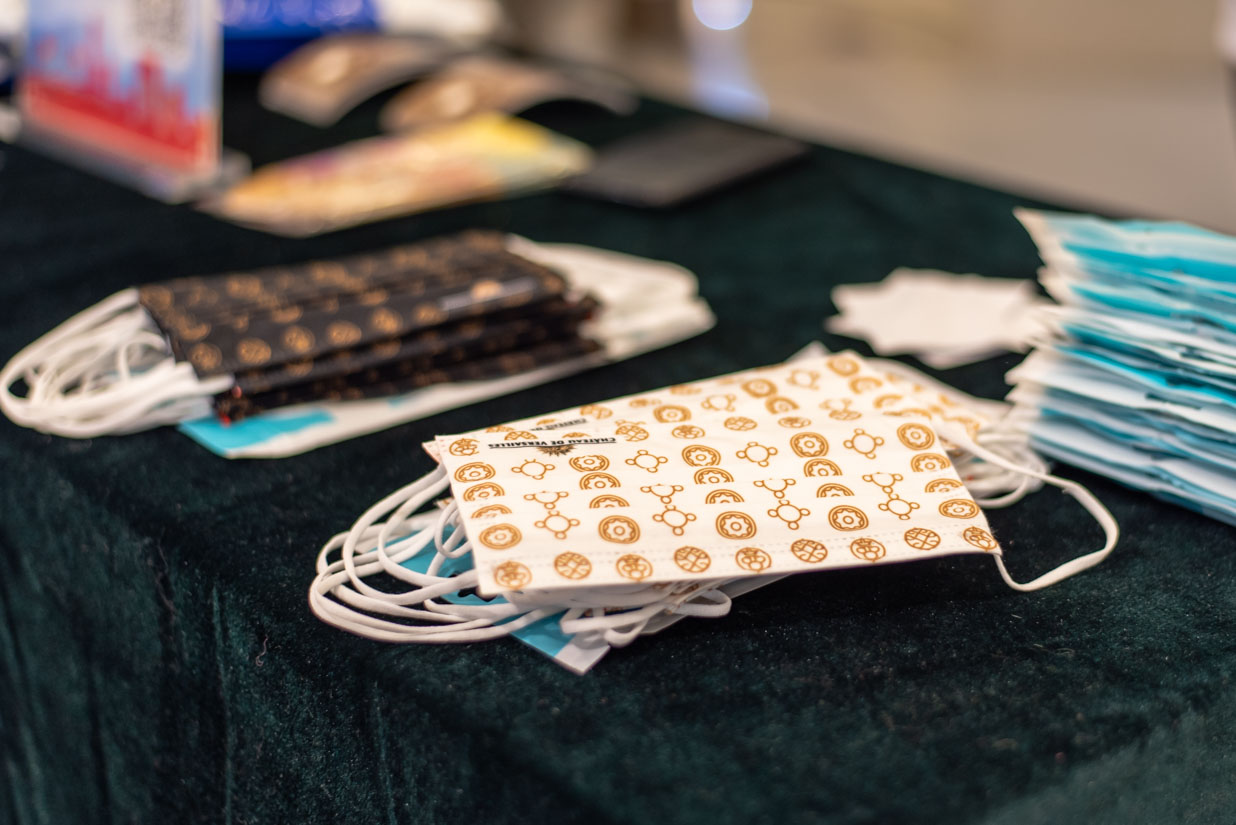 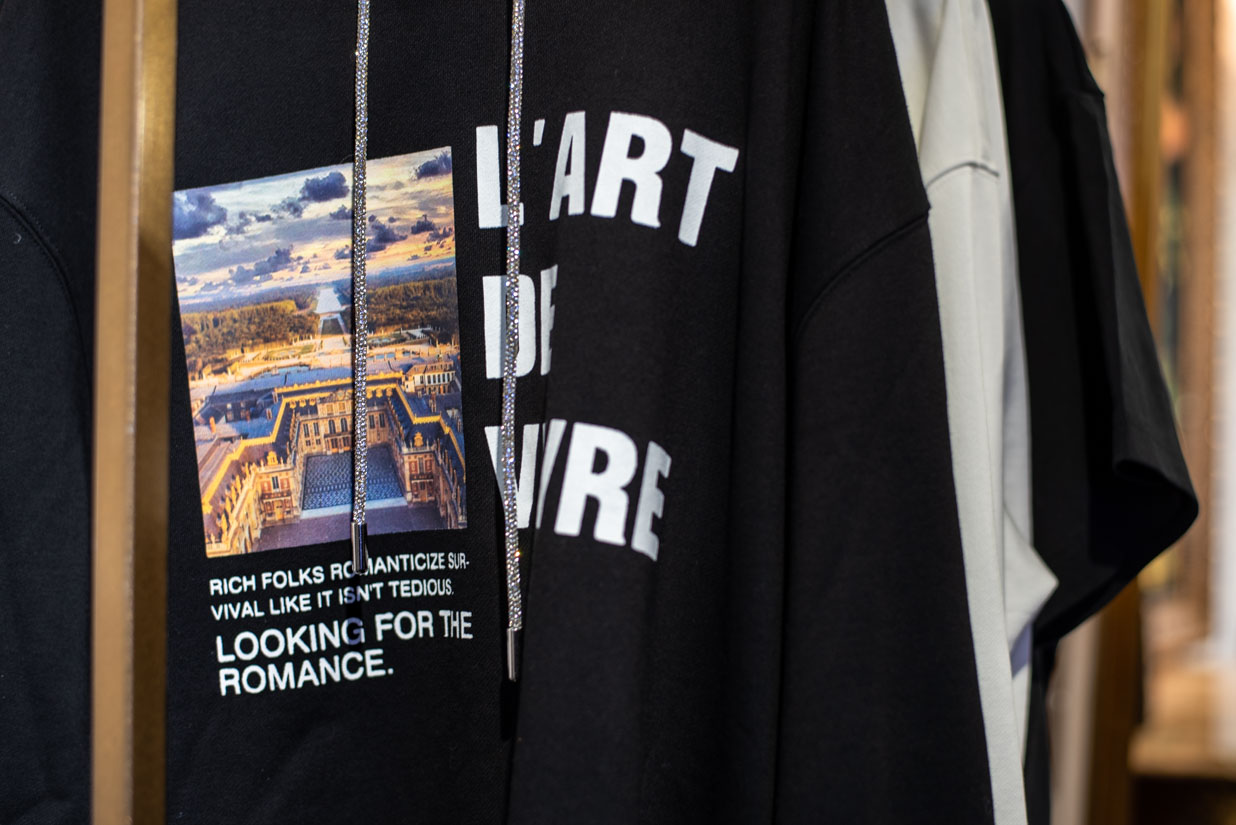 As experiences go, Virtually Versailles will keep you looking for “the romance”. This is one for distracting hyper children, or a conversation-avoidant second date. Most of the simple documentation that provide its strongest parts can be viewed online, absent the crowds and the 150rmb ticket price. Still, the big screens and immersive rooms definitely add a little magic – and a basic primer to spark further curiosity in casual visitors. With Versailles itself, except for the external parks, closed over Covid for the foreseeable future, at least a glimmer of its glamour is available in Shanghai

Seeking to cultivate your mind with art and culture? Then check out what showcases are currently running on our Exhibition Listing.