Signs of the Times

A whole lot of history repeating in Draft of History at Bibliotheca Zi-ka-wei.
By Lisa Movius
2021-03-31 12:00:00
Photos: Angela Leung
In our era of pandemics and reality star presidents, the sensation of living through history in the making is rendered an acute nerve’s edge. How today’s traumas and triumphs settle into tomorrow’s givens is explored at an exhibition of historic periodicals now at the Xujiahui Library, or Bibliotheca Zi-ka-wei (until 9 April). 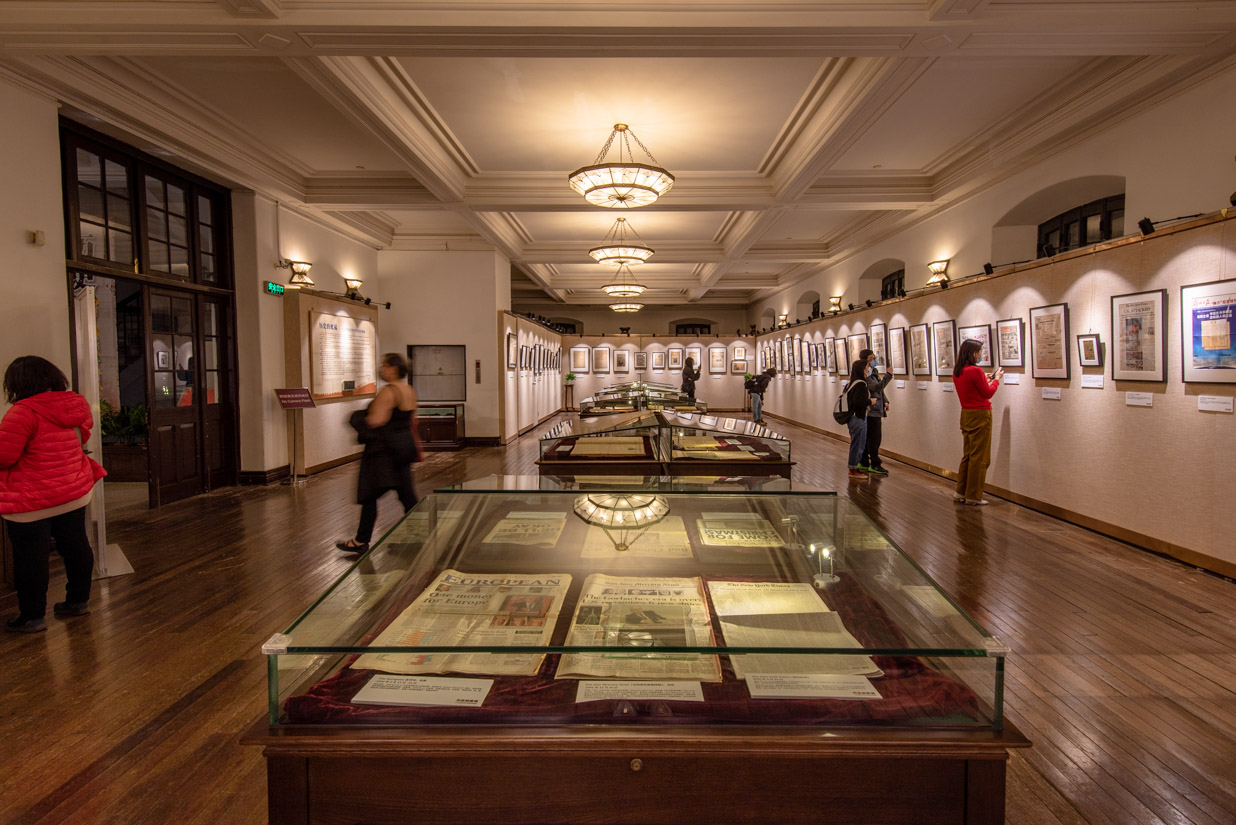 The Draft of History: Exhibition of Rare Newspapers Since the 17th Century presents 91 print publications from China and around the world, from The Spectator in 1726 to modern-day, such as the New York Times’ front page last year with the names of America’s first 100,000 Covid casualties. 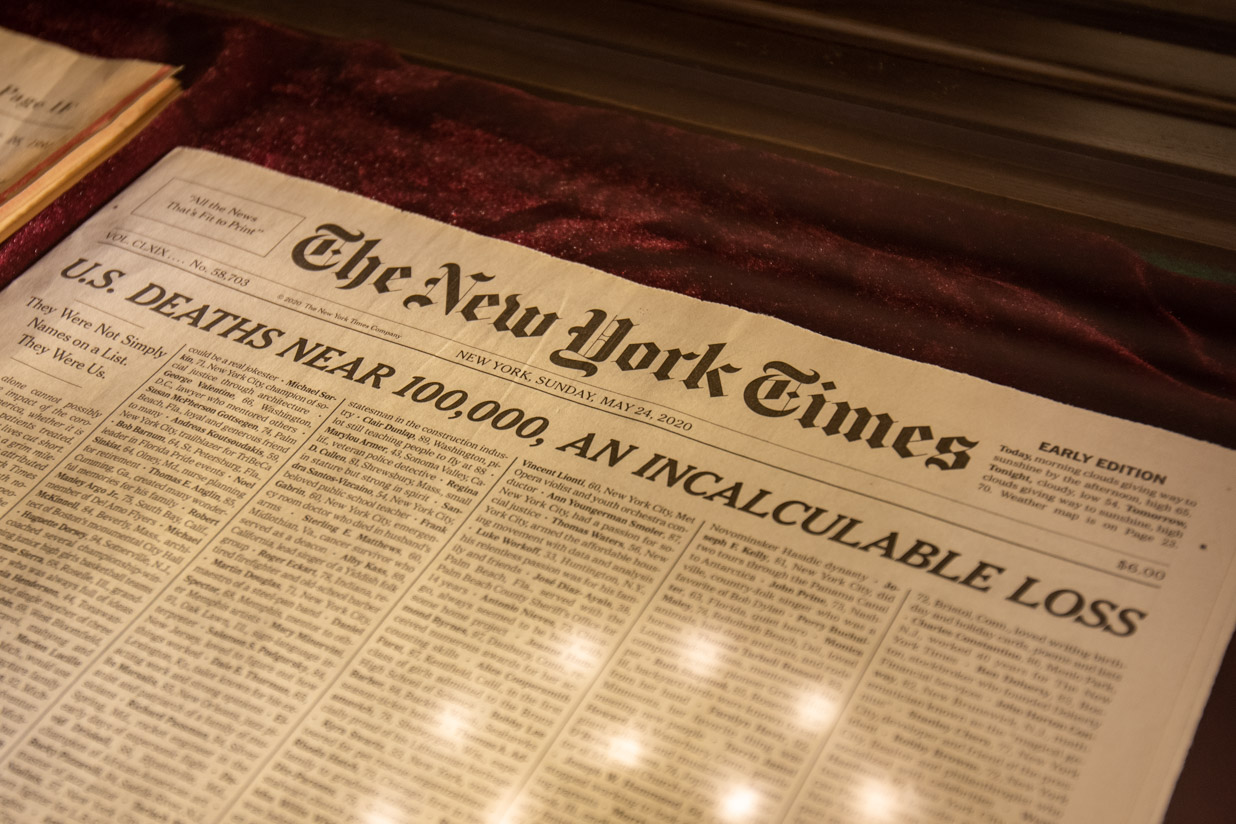 About a tenth of the items are from the Shanghai Library, with the rest drawn from the expansive collection of Fudan University Journalism School professor Zhang Lifen.

"With the Internet, we can easily overlook the special content of print papers, such as their role in civilization and the rise of compulsory education. It takes time for young people to understand the rise of type settings and how history gets written,” says Zhang. “People need education to appreciate and preserve history and knowledge, even in an era of e-readers. It is important to find new ways for future historians. Print in the 15th Century was the Internet of today: this is not Year Zero, and print is not dead. We need to understand the evolution of human society, that history does not come to a halt, but is rather a river.” 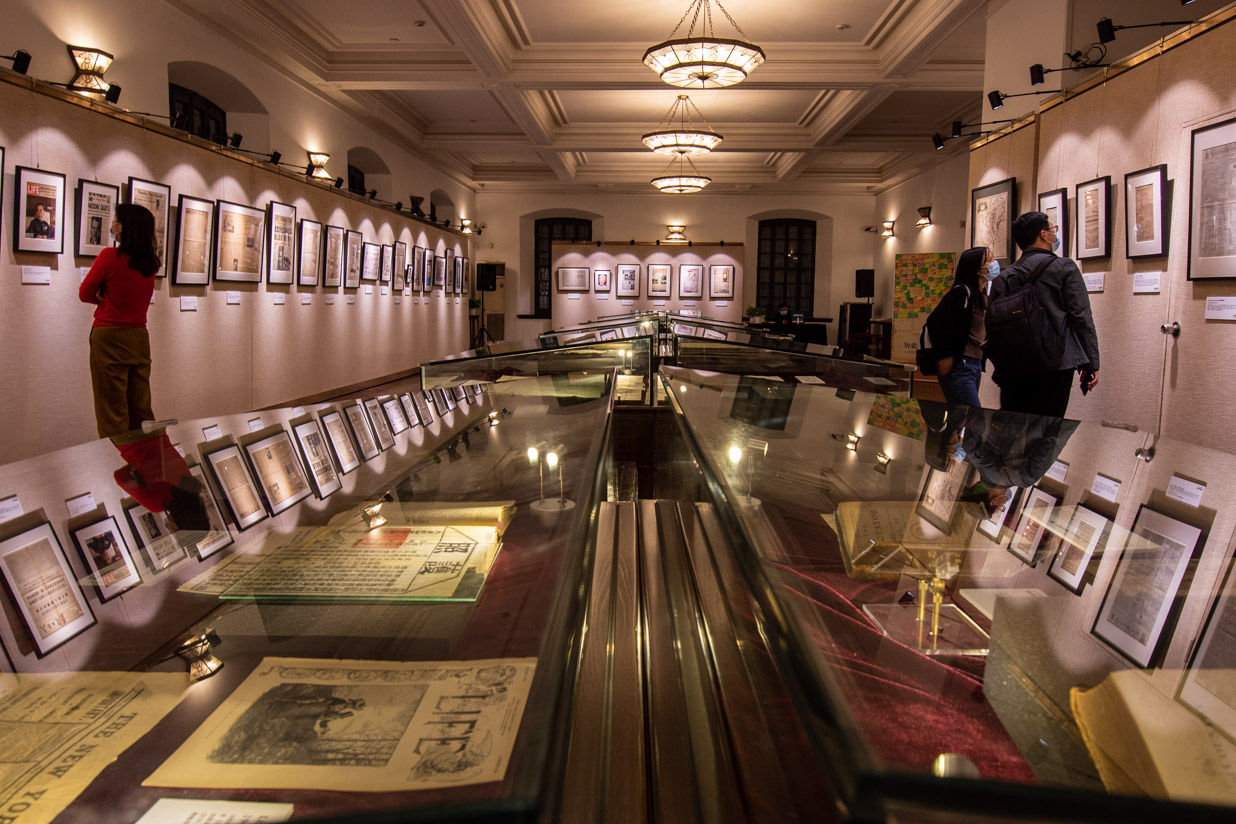 Filling a ground floor hall of the Bibliotheca, itself an evocative relic from 1847, the exhibition unfolds both chronologically and thematically. It broadly covers four areas: the emergence of modern print media, depictions of China in Western media, the development of media in China, and historic moments from the assassination of Lincoln to 9-11 to a recalled Newsweek cover celebrating Hillary Clinton as America’s first female president. 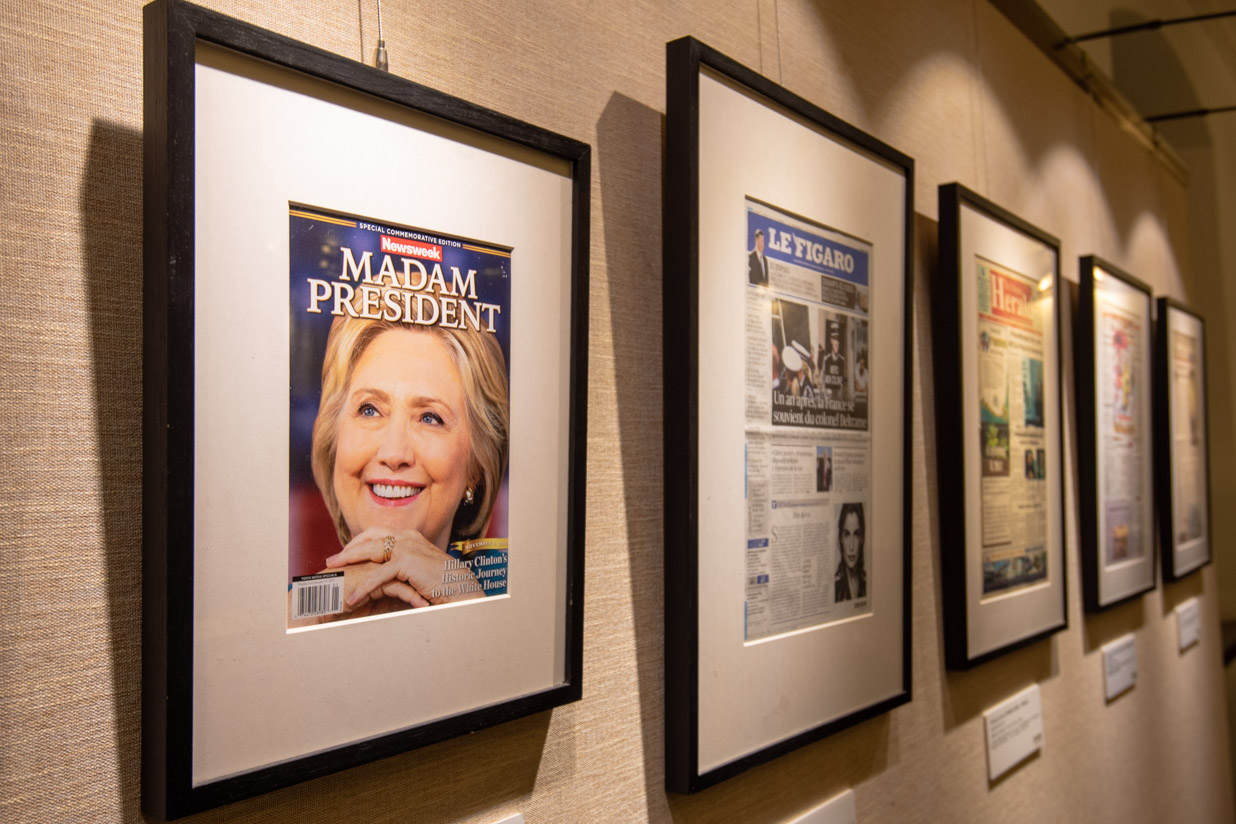 The historical highlights even include a cover of Rodong Sinmun from when Kim Jong-un ascended to the North Korean presidency. “Even for journalists, North Korean papers are hard to get,” says Zhang. He asked friends traveling to Pyongyang to report on Kim’s rise to snag him something. “I wanted a mint condition paper announcing it.” While his friends did not succeed, “I received one as a gift from Korean Communist Party Headquarters, wrapped in a paper covered in Party slogans. I was impressed at the extreme care they put into the wrapping.” 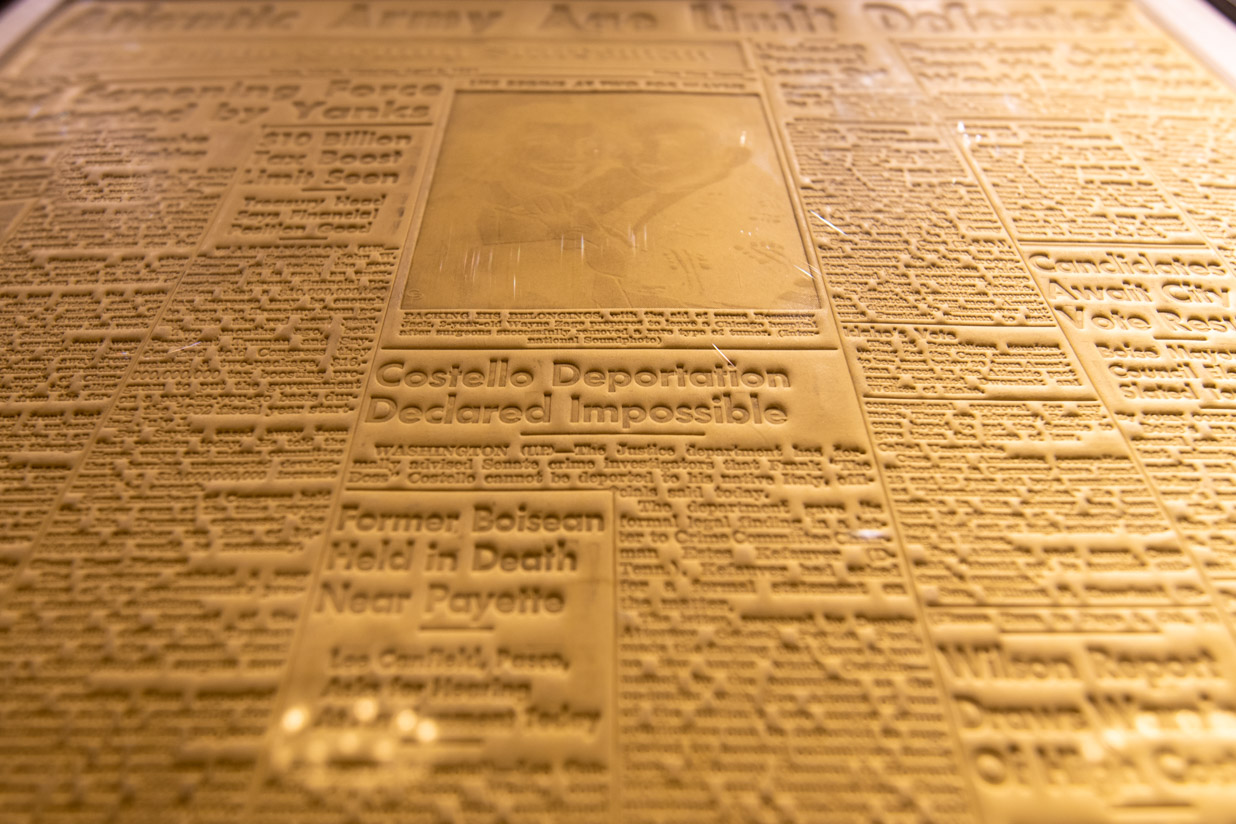 Zhang started collecting newspapers while working on his PhD in the United Kingdom in the late 1980s, amassing UK papers reporting big international news. His criterion is the combination of major publications reporting major news, and he now has “in the region of” 400 items. Along with his own travels, he has friends send him different countries’ papers. 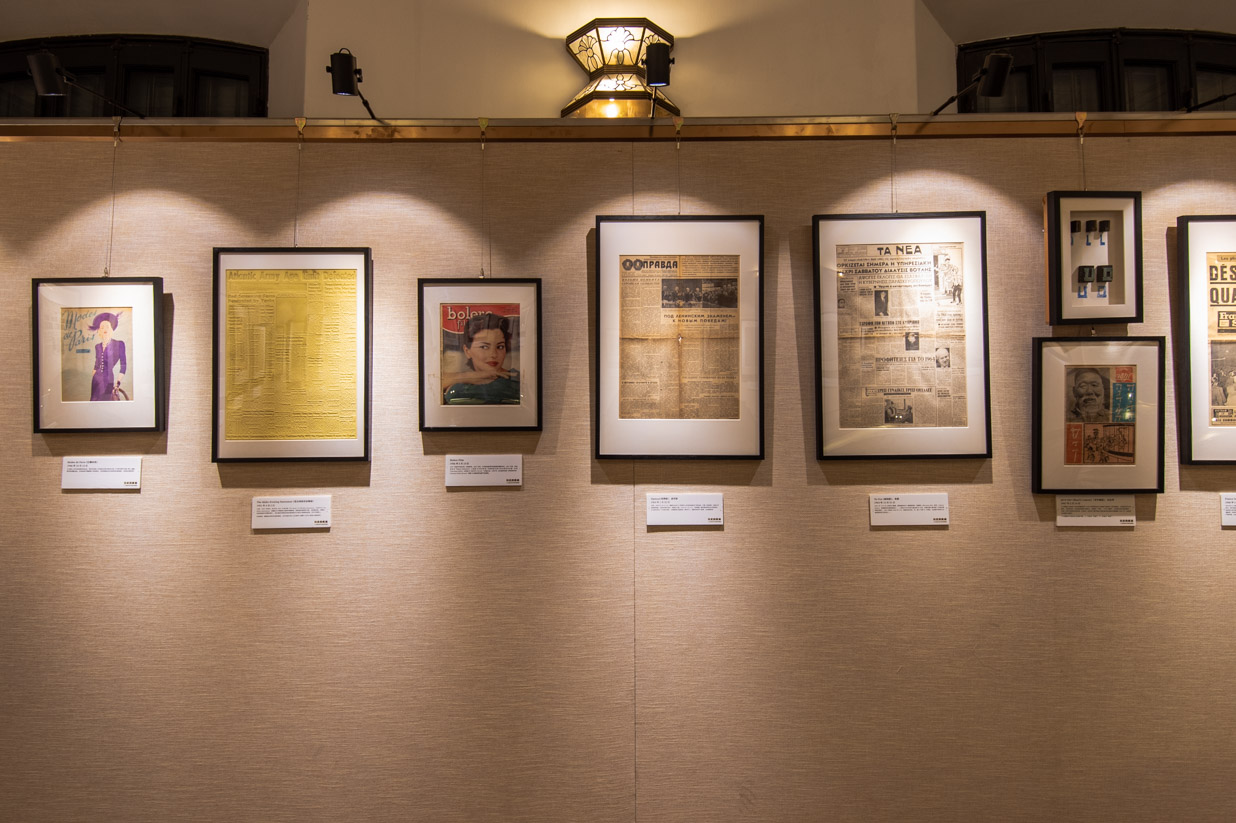 For antique papers, “I have to search various auctions and antique bookstores. There are not many auctions focusing on newspapers, so I have to be nosey, to find information about collections going up for auction.” He also pursues more prosaic routes, for example snagging the Lincoln assassination cover from Ebay last year. Zhang’s collection is largely kept at the Fudan Journalism School, some displayed in the library and public spaces, and more at the school’s archive. “Older papers have a lot of linen and cotton in them, so are easy to preserve,” Zhang says. It is the contemporary periodicals, with their cheaper materials, that are more challenging to maintain. 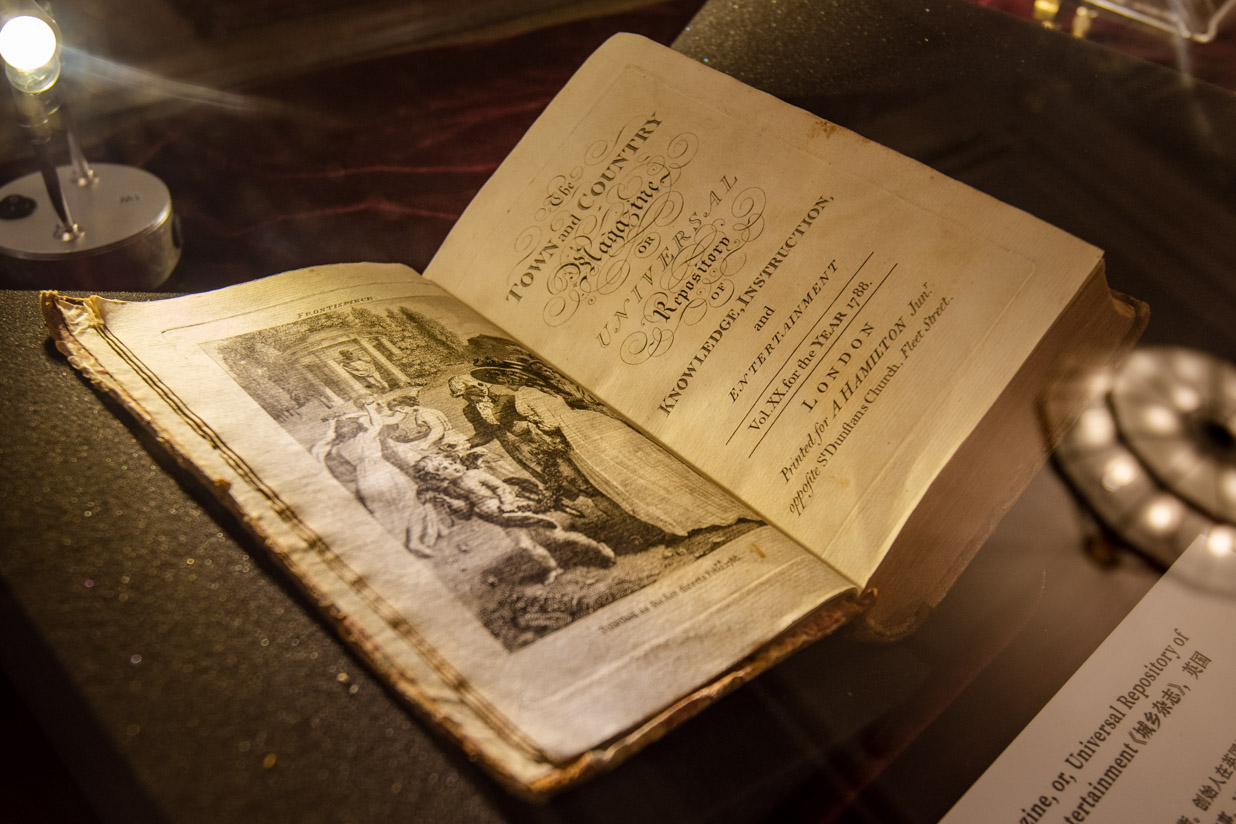 After the Shanghai show closes, he is planning to tour the collection to Beijing and Guizhou and perhaps elsewhere, probably showing at libraries and universities. “Wherever it goes next, I want to get local organizers to contribute something from local media to the mix.” In Shanghai, the items from the Shanghai Library, which is the parent of the Bibliotheca Zi-ka-wei, include early city periodicals from the Jewish and British communities here. The archives of the long-running British institution North China Daily News are flipped to the pages from 26 May 1949, when the city passed to control of the People’s Army: details of the shift pair on the front page with global news plus local minutiae like the robbery of a Polish gentleman right down to his new pair of shoes. 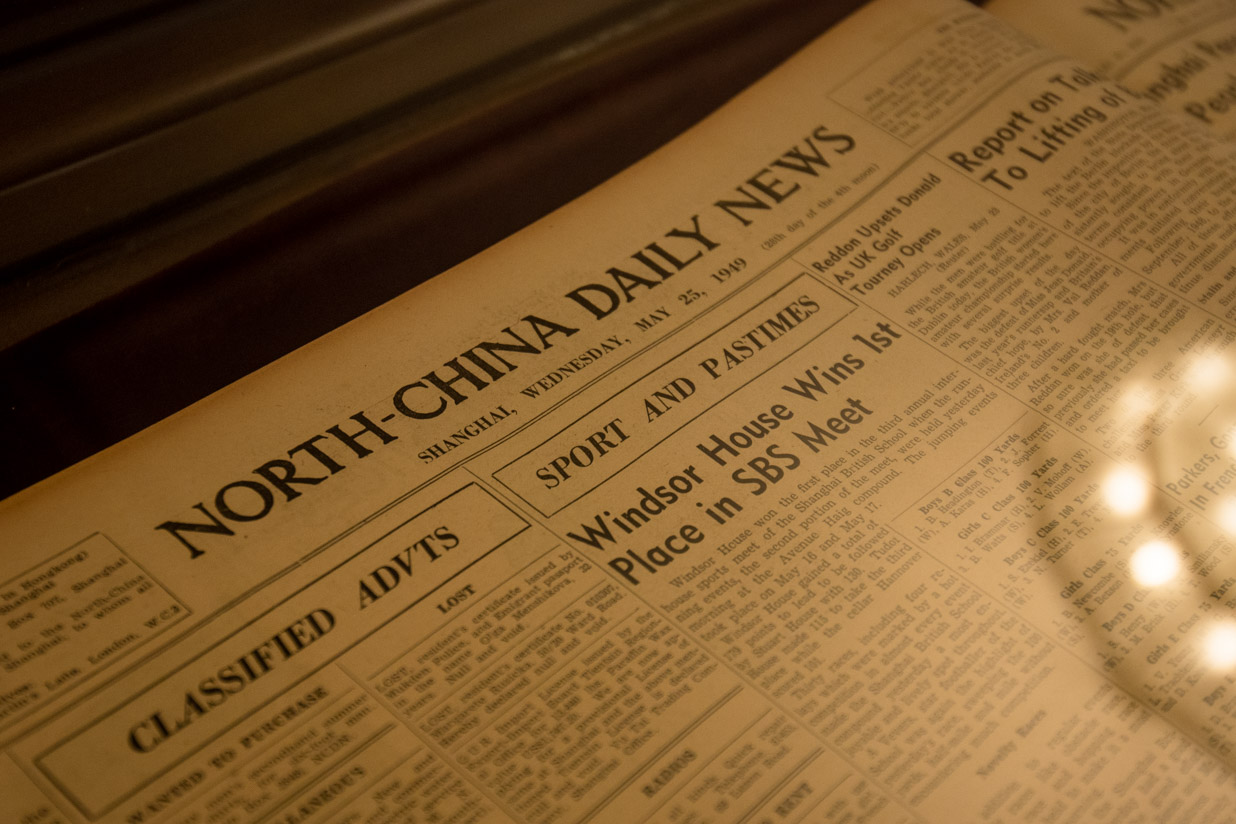 One could happily spend hours reading the broadsheets, often most interesting for their down folds. The 1965 Philadelphia Inquirer on the death of Winston Churchill also presents a prim story headed, “Designers Hem, Haw Over Shorter Skirts.” 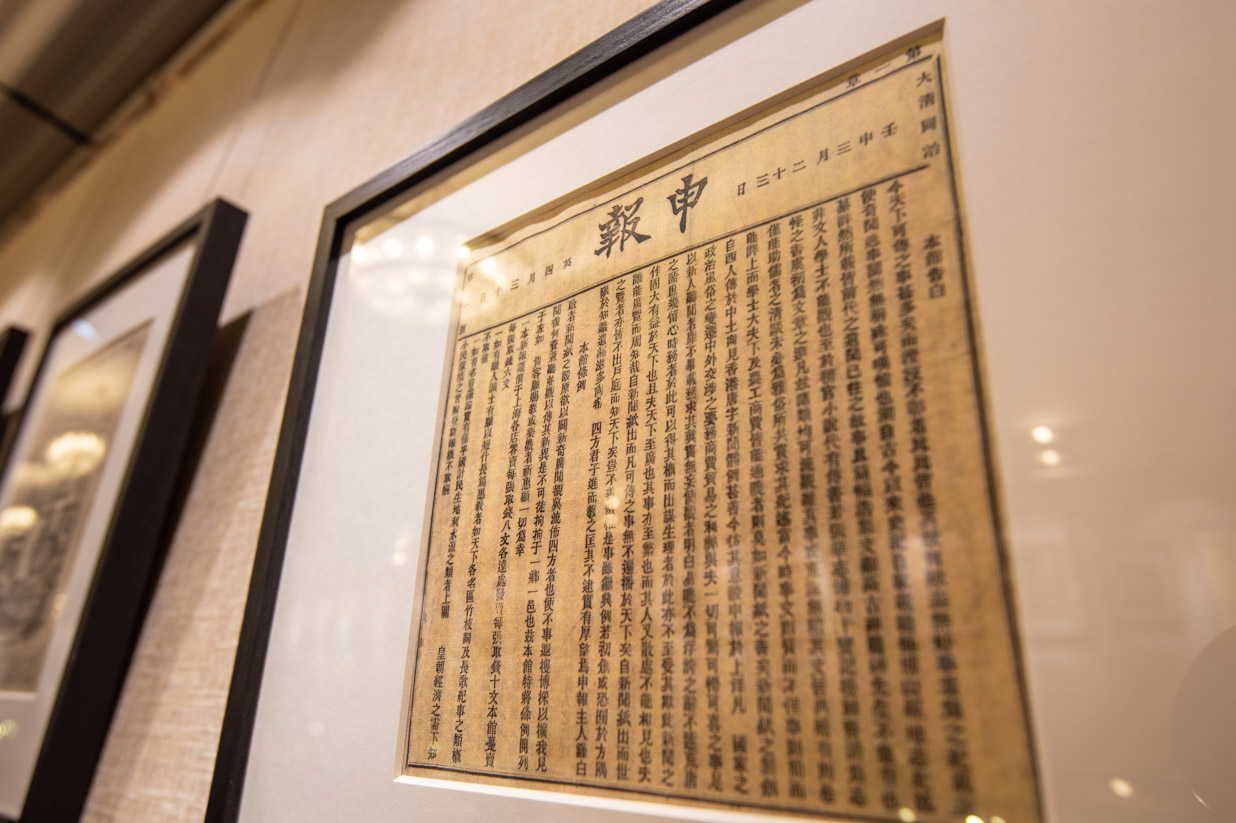 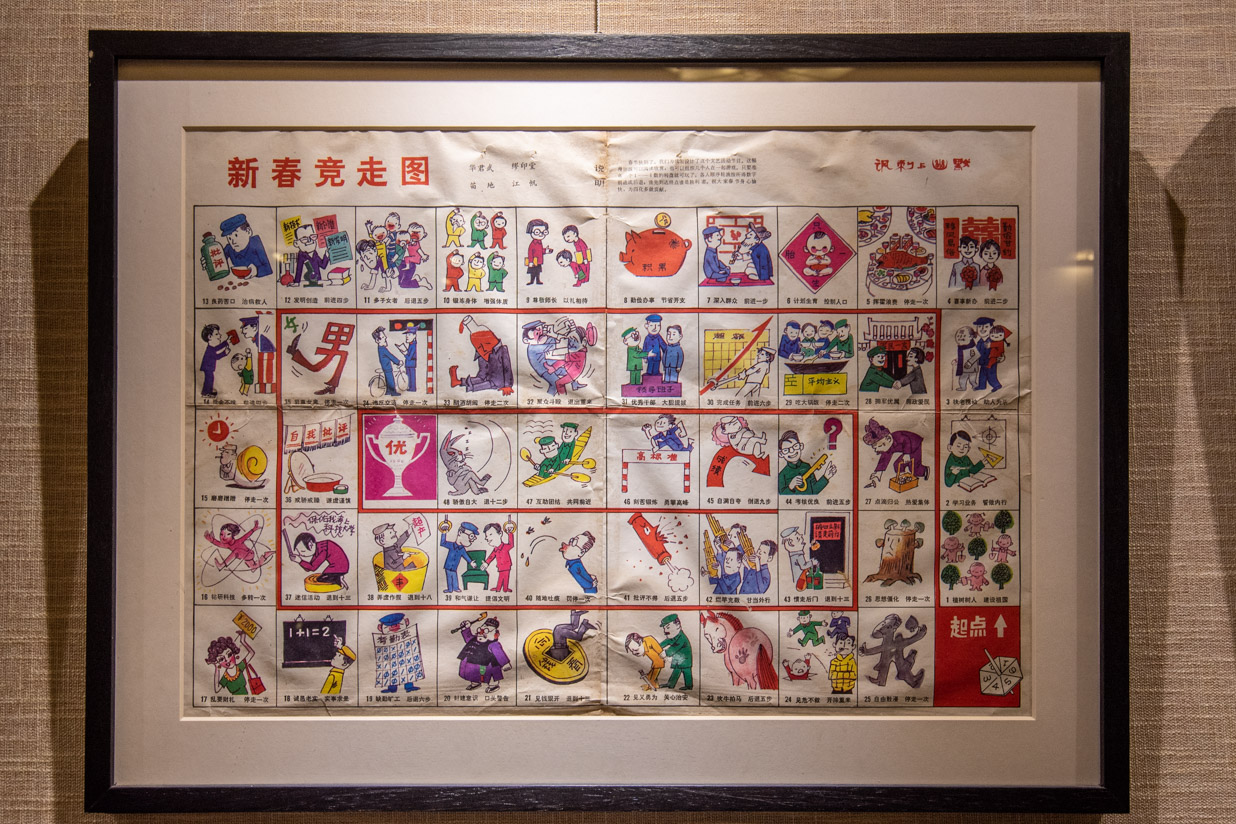 Particularly fascinating is a cartoon from a 1979 People’s Daily supplement, a little board game titled “New Year Walking Chart”. One of the first political cartoons after the Cultural Revolution, it depicts mores and challenges to public behavior, many of which still bedevil today. Points are awarded for working hard or giving up a seat on public transit, and detracted for spitting, sycophancy, superstition, selfishness and sexism. 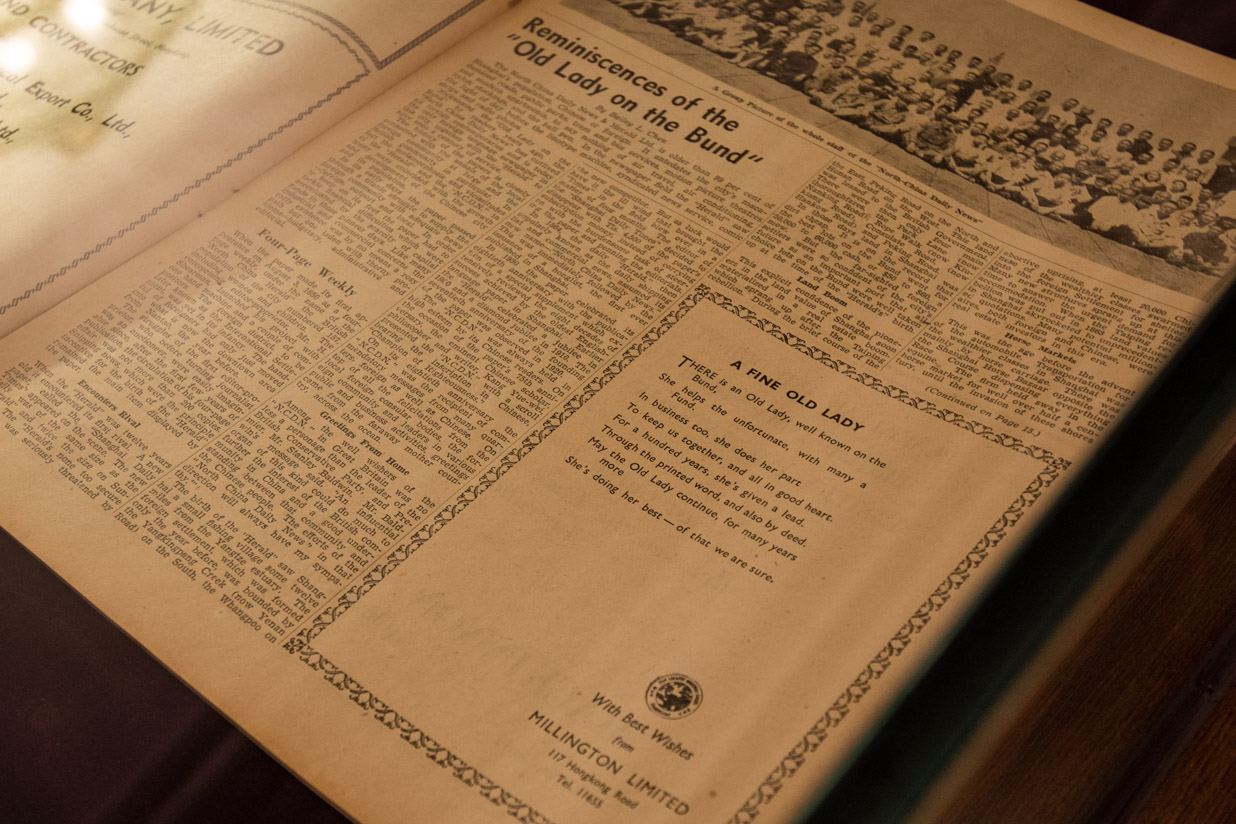 Zhang Lifen specializes in British journalism and the history of modern journalism, but is at Fudan is currently teaching investigative and in-depth journalism, along with analyses of journalistic classics particularly in English. 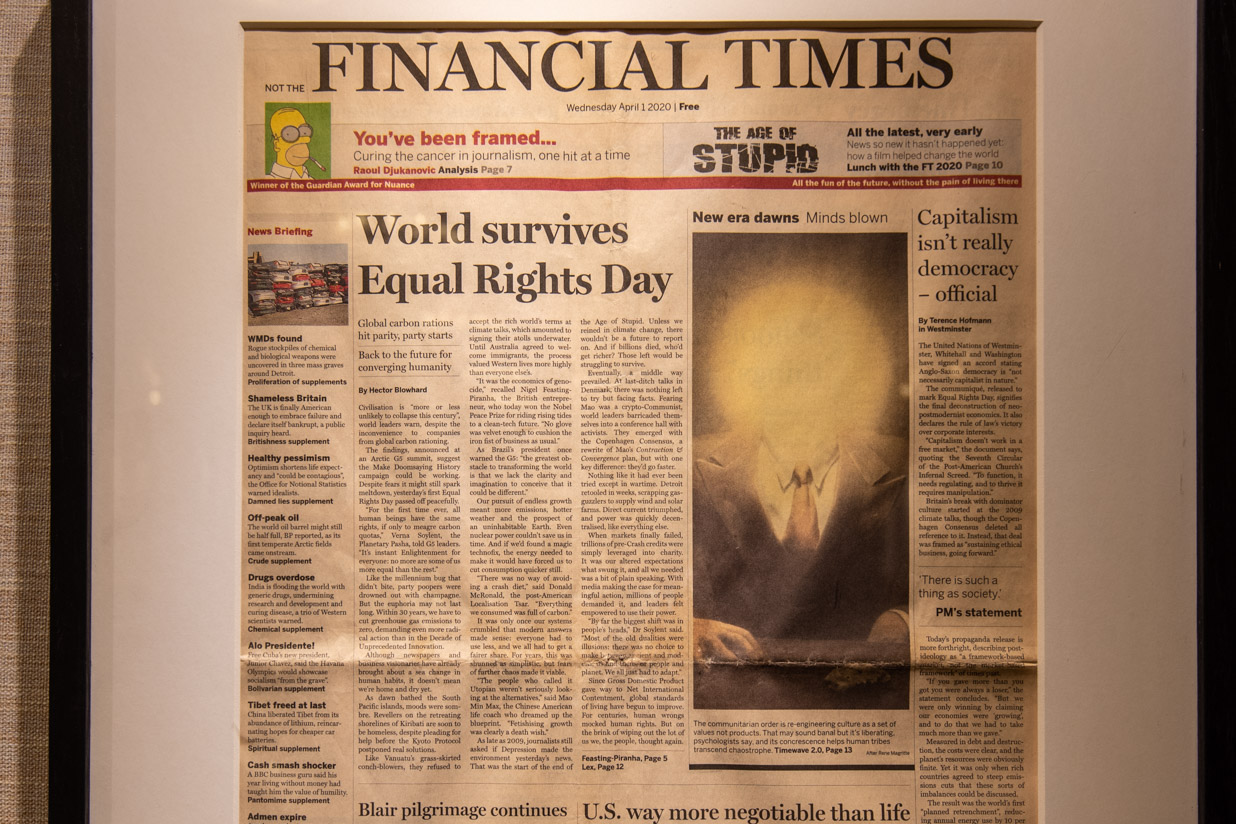 “I look at how journalism evolved, as genre and narrative,” Zhang describes. “Technology all ties back to history, and is a part of it. The original philosophy of journalism should be retained. Some of the best reporting is still by institutions launched in the Nineteenth Century, even if they are not still on paper. Their philosophy about obligation and self-regulation are all still alive today.”

Zhang Lifen will give a tour of the exhibition with the Shanghai Foreign Correspondents Club at 2pm on 3 April, open to nonmembers for 50rmb. Otherwise, the exhibition runs Tuesdays to Saturdays until 9 April. Click here to purchase tickets for the tour.