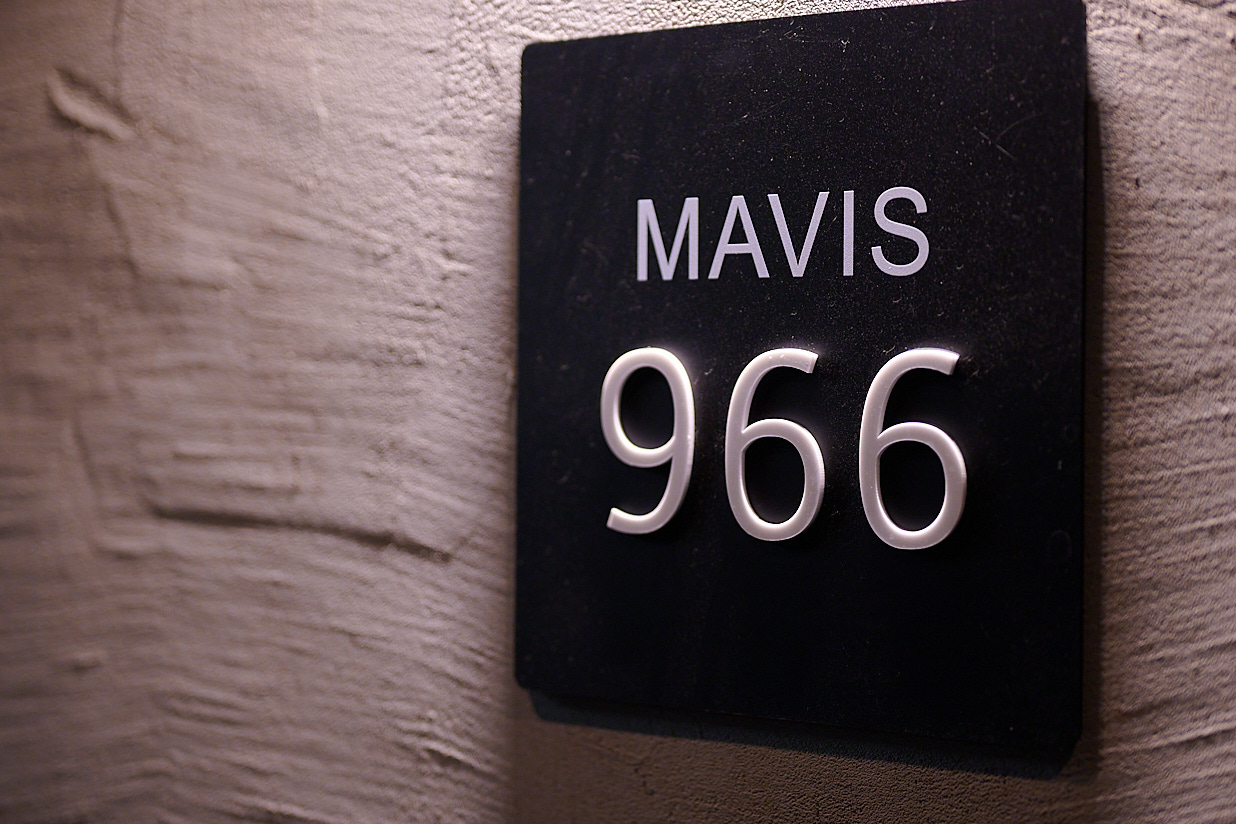 What is it: Mavis 966 is part of a Shanghai trend of contemporary bistros. No gimmicks, no culinary in-jokes, no deconstructions or re-imaginings, just straightforward classic French and British food, with the occasional subtle twist. 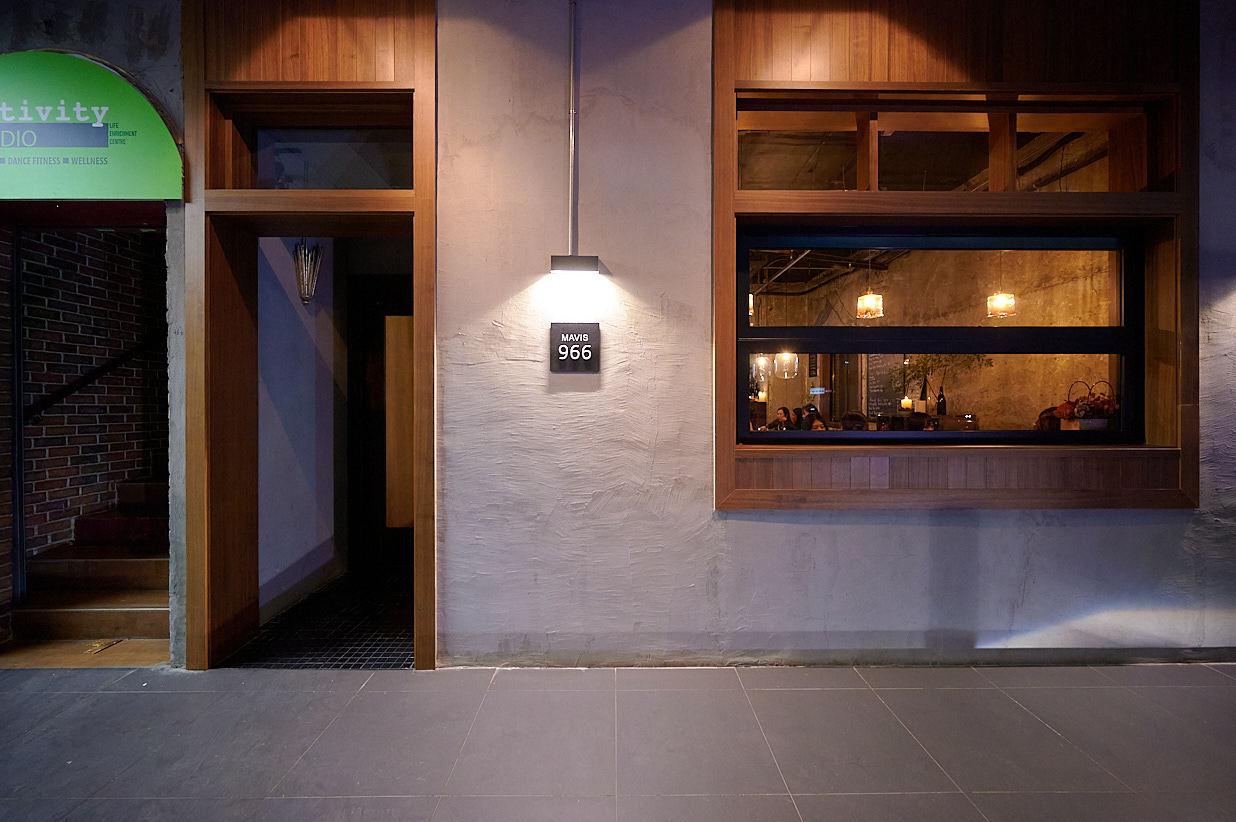 Area: Where Wuding and Jiaozhou meet. Mavis 966 stands where the very forgettable Tribeca used to be. Its closest neighbors are the awkwardly punned PHO TO SHOP by Cyclo, Bites and Brews, Barbarian, and Alimentari. 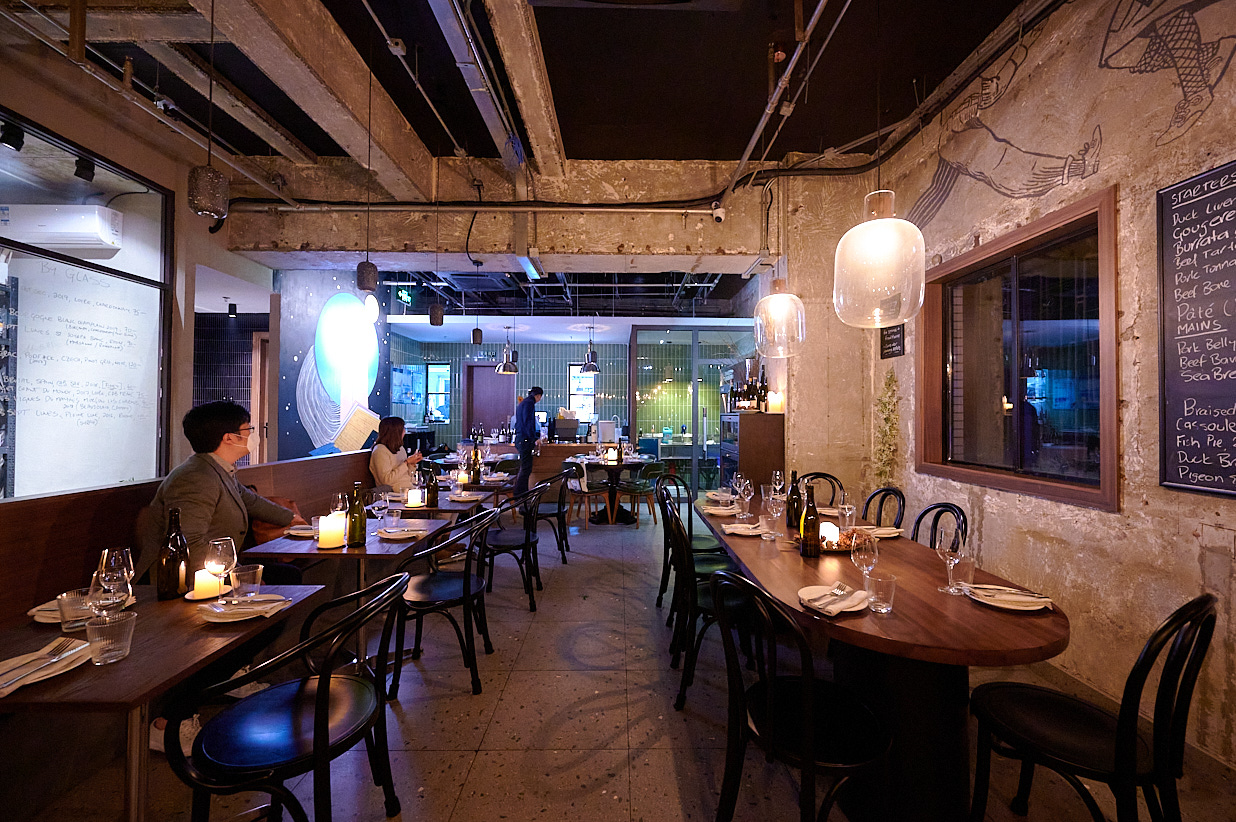 Atmosphere: I've recently seen a lot of slick little bistros like this open up. Most of them, Mavis included, follow similar broad strokes — walls stripped down to concrete complete with nail holes and pneumatic chisel gashes, naked tabletops, and a glass closet where they store the wine. It's spare and small, yet somehow feels warm and intimate. 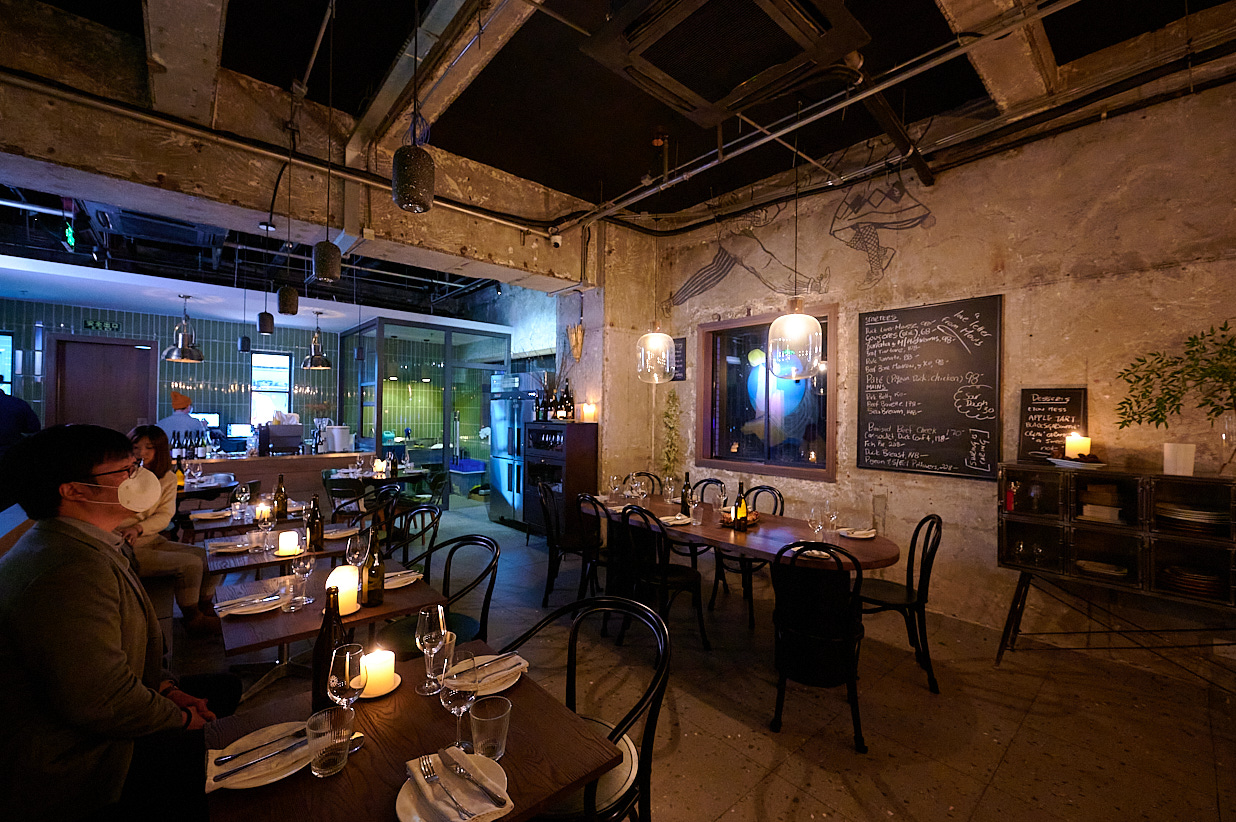 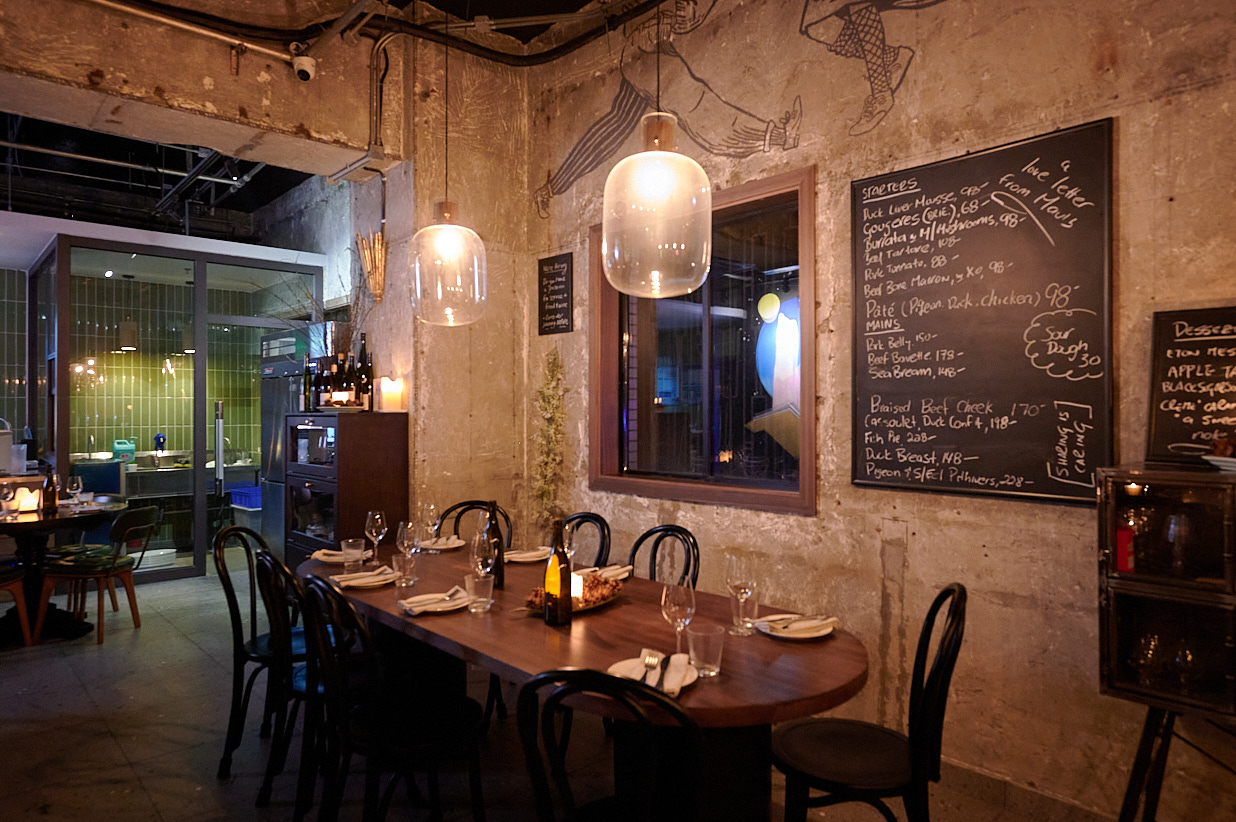 Dishes to Try: Food here is classic without being stodgy. It's the kind of stuff that is supposed to be scrawled on a single blackboard visible to the entire dining room. I see terrines everywhere now. One of these days, I'm going to get tired of ordering them. I'm glad I wasn't on the night I went here.

Theirs is cobblestoned with hunks of foie gras, chicken and duck. It's finished off with a splash of truffle oil and served with a side of sauce gribiche, which is kind of like a thin mayonnaise made with hard-boiled eggs with chunks of pickles and fresh herbs. 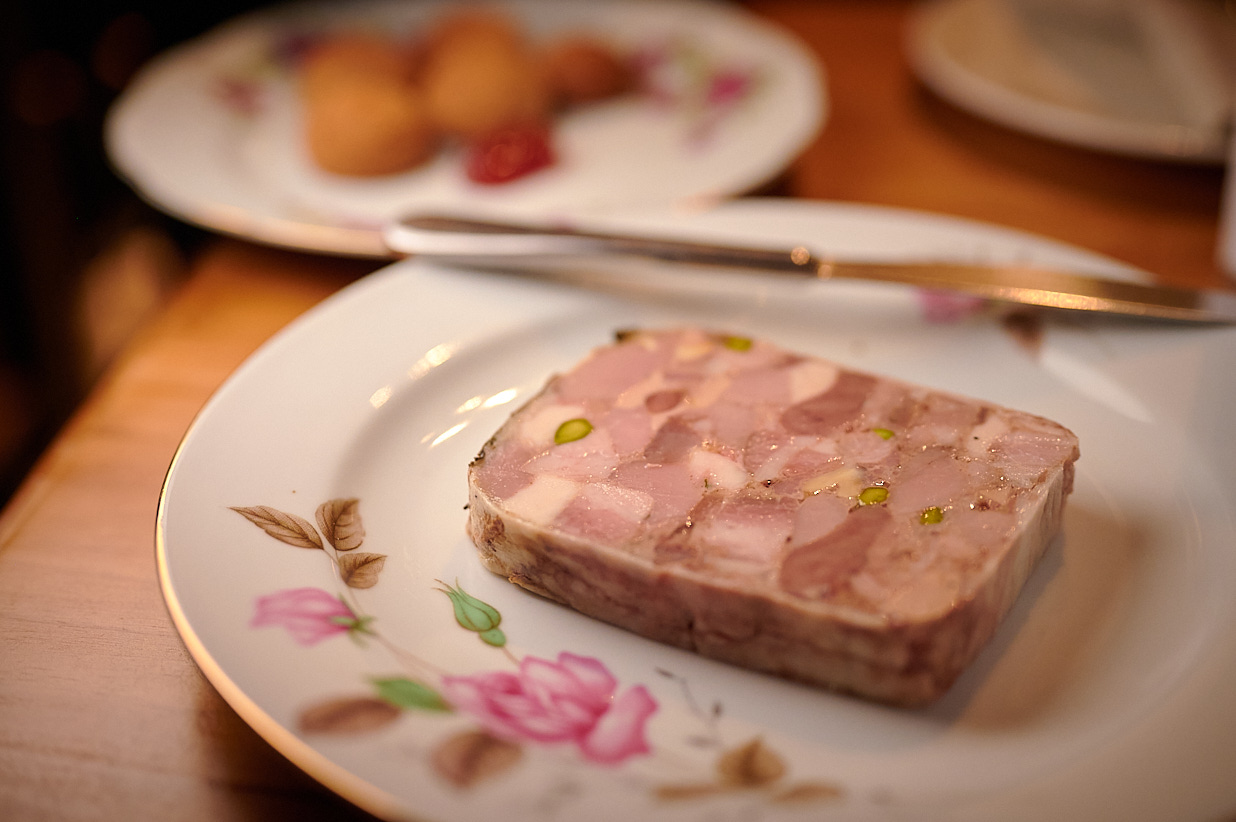 Their gougeres are worth ordering as well. It's pretty hard to not like golden brown, airy little puffs filled with gooey globs of melted brie. 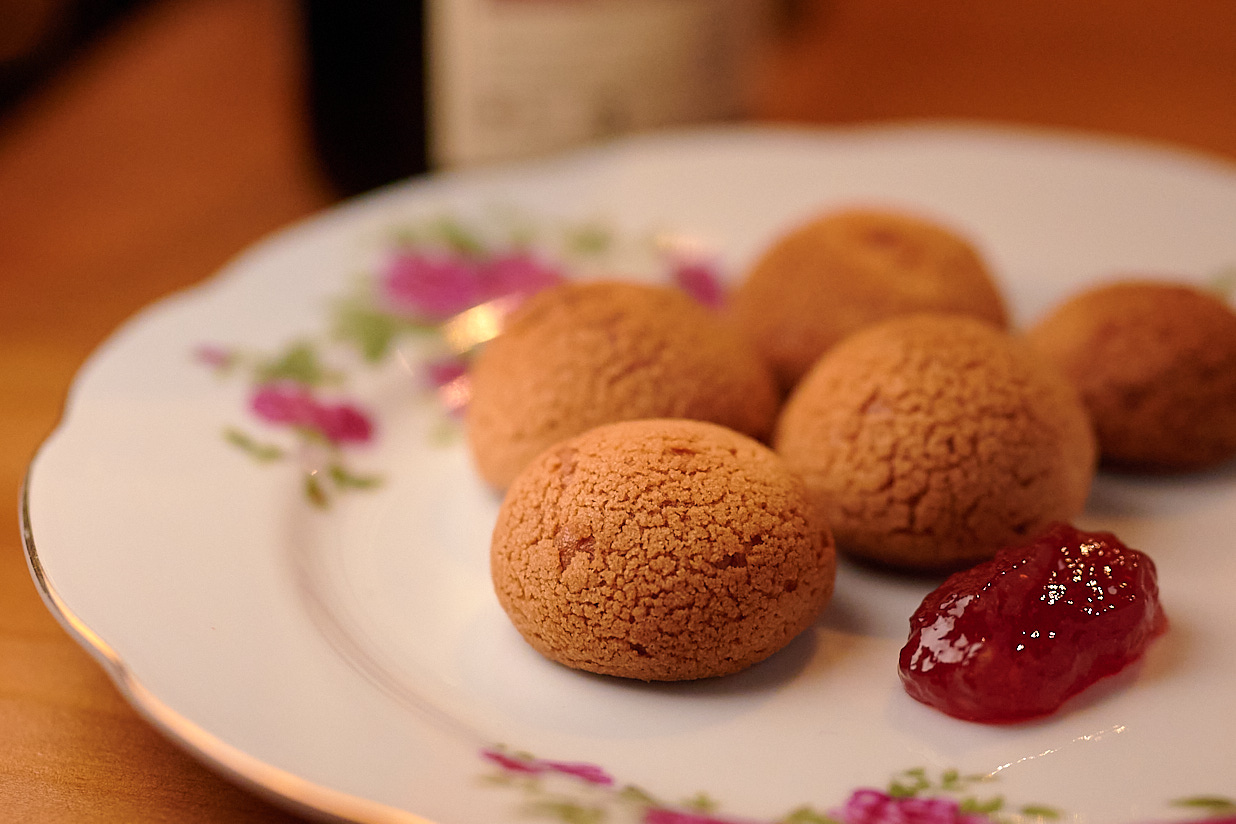 They do bone roasted bone marrow, but so do the other two restaurants I've written about in the past few weeks, and I'm running out of new ways to describe it. They top it with XO sauce. Let's move on.

Mains are hearty, heavy and largely carnivorous. They do a nice bavette, or skirt steak. It gets a perfect sear and a simple presentation alongside sautéed mushrooms and a simple jus. 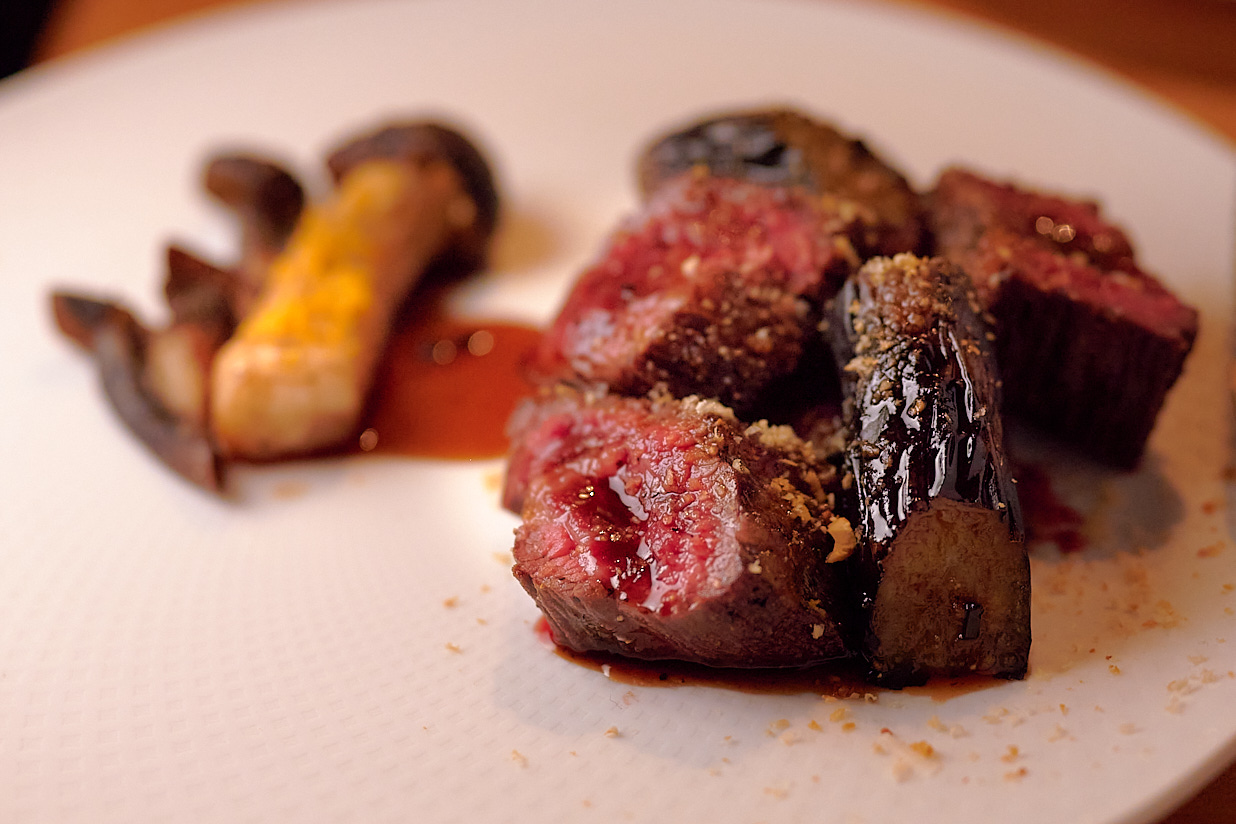 Every restaurant has that one dish that they hope will be a social media darling. At Mavis, that dish is the pigeon pithivier. A flaky puff pastry encases a mince of pigeon breast and some offal bits. This, in turn, surrounds slices of foie gras, pigeon breast, and eel layered like Neapolitan ice cream. It is delicious. The addition of eel may raise an eyebrow or two, but it works. My only nitpicking criticism: lose the pistachios. You put nuts in a dish like this for texture, for crunch. Baking them in pigeon mince just turns them to mush. They add nothing. 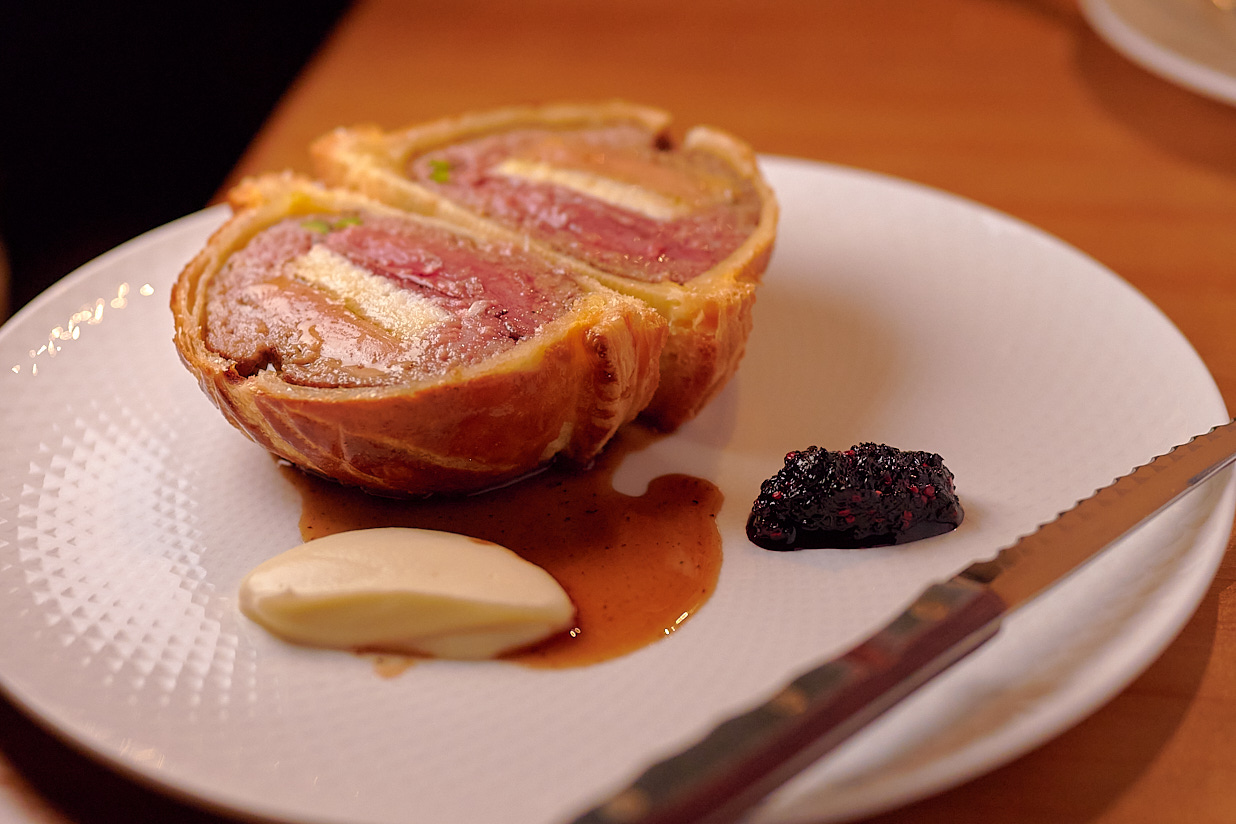 For dessert, go for the Eton mess. After a meal this rich, its tangy passionfruit cream with dollops of meringue will be a welcome palate cleanser. 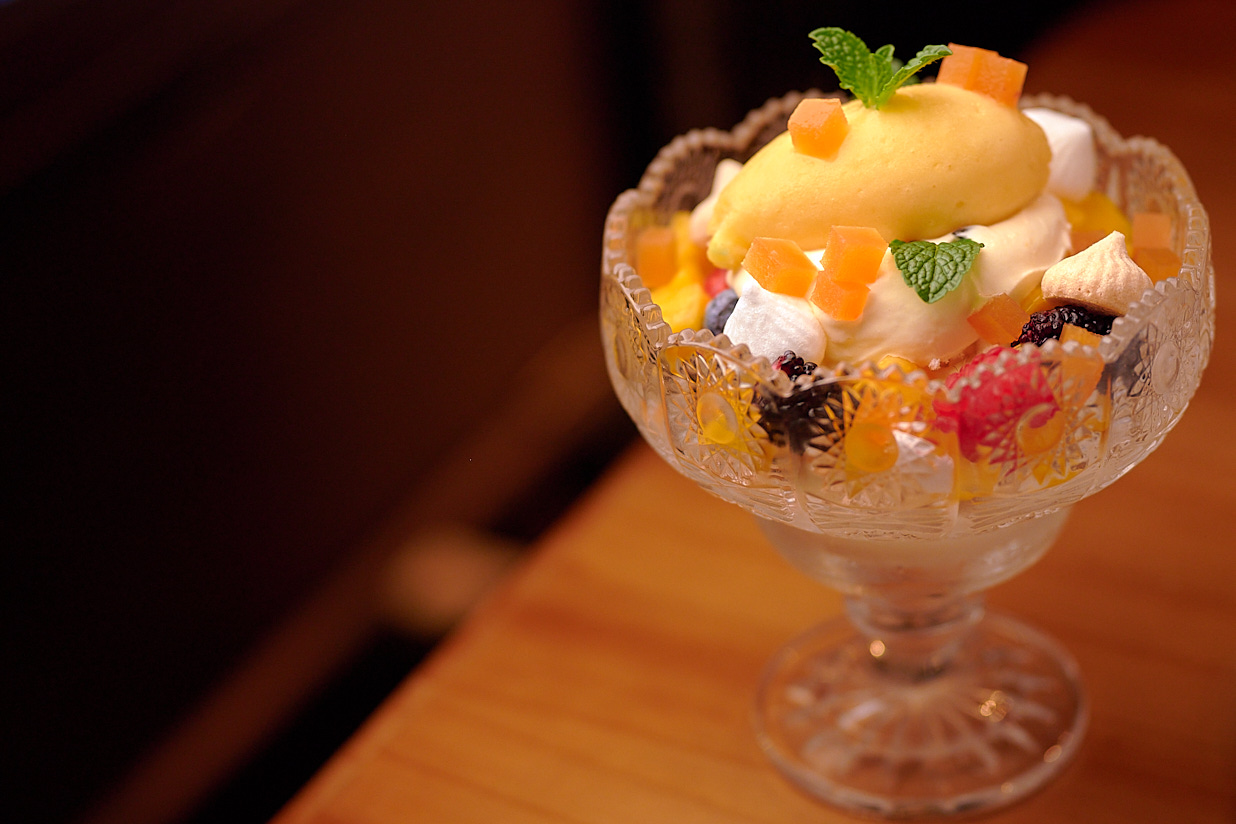 One more thing. I've dined here twice. I've tried to dine here three times, and I've encountered a couple of lapses in service that warrant a mention. On my first visit, we asked about the fish pie. Our server explained that it is "a pie made with fish".

I asked, "You mean like an English-style fish pie? What kind of fish is in it?"

Long story short: she did not mean "like a sample". This was one of the two most expensive items on the menu. I didn't want to "try it" until I knew what I was ordering. The proprietor eventually came over and explained what it was. We ordered it. It was unremarkable. Hey, it happens sometimes. We can't win them all.

Anecdote Number Two: I had booked a table for two at 7pm on a Saturday earlier in the week, rightly assuming that the place fills up on the weekends. That Saturday afternoon, I received a phone call from Mavis and was told that my table was no longer available at the time I wanted. I wasn't given a very clear explanation, nor was I given an apology. I have worked in restaurants before. Sometimes, the employee who takes the booking doesn't have all the information they need. Maybe they don't know that there is a buy-out of the entire restaurant that night or something. Perhaps there is an error in the reservation book. Mistakes happen. I get it. But receiving this news the day of without so much as an apology? Come on, guys.

The point to both of these anecdotes is this: Train your employees! The staff at a restaurant in this price range should know the menu, and they should know how to talk to customers. 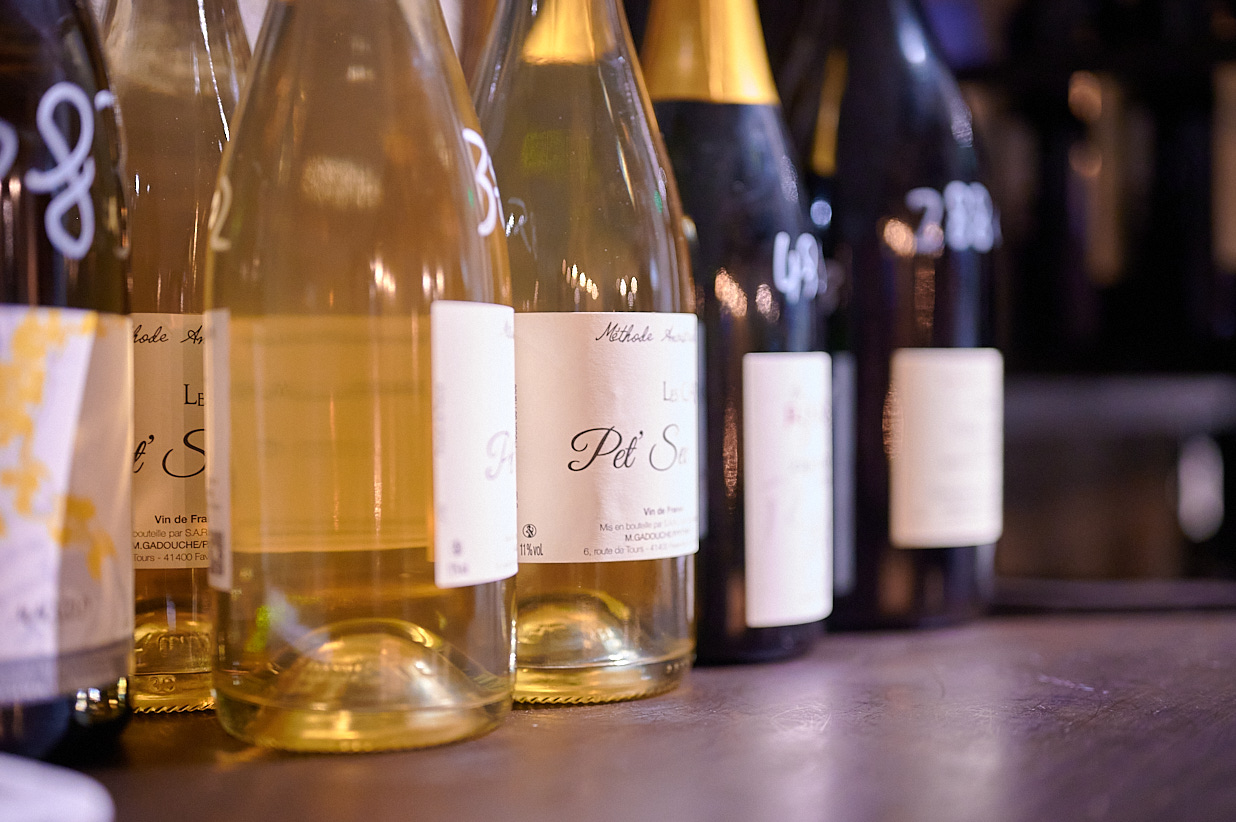 Damage: Plan on spending at least 300rmb per person here, and that's before you factor in the wine. Starters range from 68rmb for those gougeres to 98rmb for that terrine and then up to 108rmb for a beef tartare that we didn't order. That bavette is 178rmb, but you can spend as much as 228rmb for the pigeon pithivier (worth it) or that fish pie (not worth it). Wines are 70 to 120rmb per glass and top out north of 1000 by the bottle.

Who's Going: Mortal enemy food bloggers, apparently. On our visit, we overheard one of the servers saying about two other guests, "Be sure not to seat these two bloggers next to each other. They can't stand each other." True story.