How much does a live koala cost? If some media are to be believed, live koalas and wolf cubs sold for 70rmb per jin at Wuhan’s Huanan Seafood Market, the probable start of the global coronavirus outbreak. Newspapers from The South China Morning Post to The Guardian cited a single signboard from the market claiming absurdly low prices for wildly exotic animals, including koalas, wolf pups and hedgehogs. The idea that one might find a live koala or a wolf pup (gray wolves are endangered in China) for the price of a bottle of wine is not believable. Just how does one eat a hedgehog (18rmb) anyway? 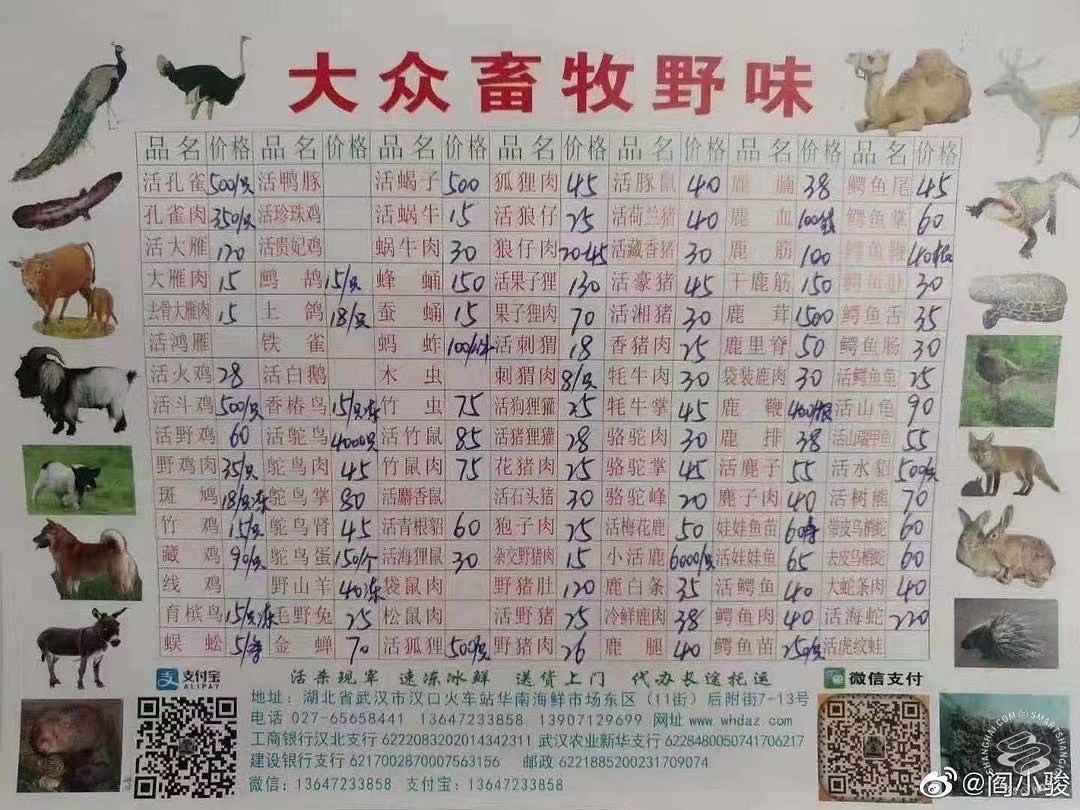 Nevermind the believability. This is classic Orientalism, painting China’s food habits as outrageously exotic and craven. Old problem. The relevant one is that in doing so this time, as media outlets cover the coronavirus, some journalists are mixing up wet markets and wildlife markets. But most wet markets are not wildlife markets and confusing the two is dangerous.

Wet markets are a cornerstone of China’s food distribution system, and have benefits for society both tangible and intangible, from improved nutrition for children to stronger interpersonal relationships. So-called for their open-air origins, where the ground was hosed down throughout the day, they are the traditional backbone to China’s food supply system.

In an aesthetic sense, they are an antidote to the sterile, plastic-wrapped world of the supermarkets that have tried unsuccessfully to replace them. In the early 2000’s, China implemented a policy called nong gai chao or Replacing Wet Markets with Supermarkets, in a bid to “upgrade” cities and “modernize” wet markets. After a couple of years, and a boom in the number of supermarkets from both foreign companies like Carrefour and local ones like Lianhua, customers stuck by their wet markets for most fresh food and used supermarkets for supplemental shopping and dry goods. Far from being replaced by supermarkets, wet markets have made improvements in sanitation and hygiene and are still thriving. In Shanghai alone, there were nearly 1,000 as of 2019. After a several-month renovation, my daily wet market on Wulumuqi Lu reopened last month with terrazzo floors and plate-glass windows. It is not the norm; it is a model. 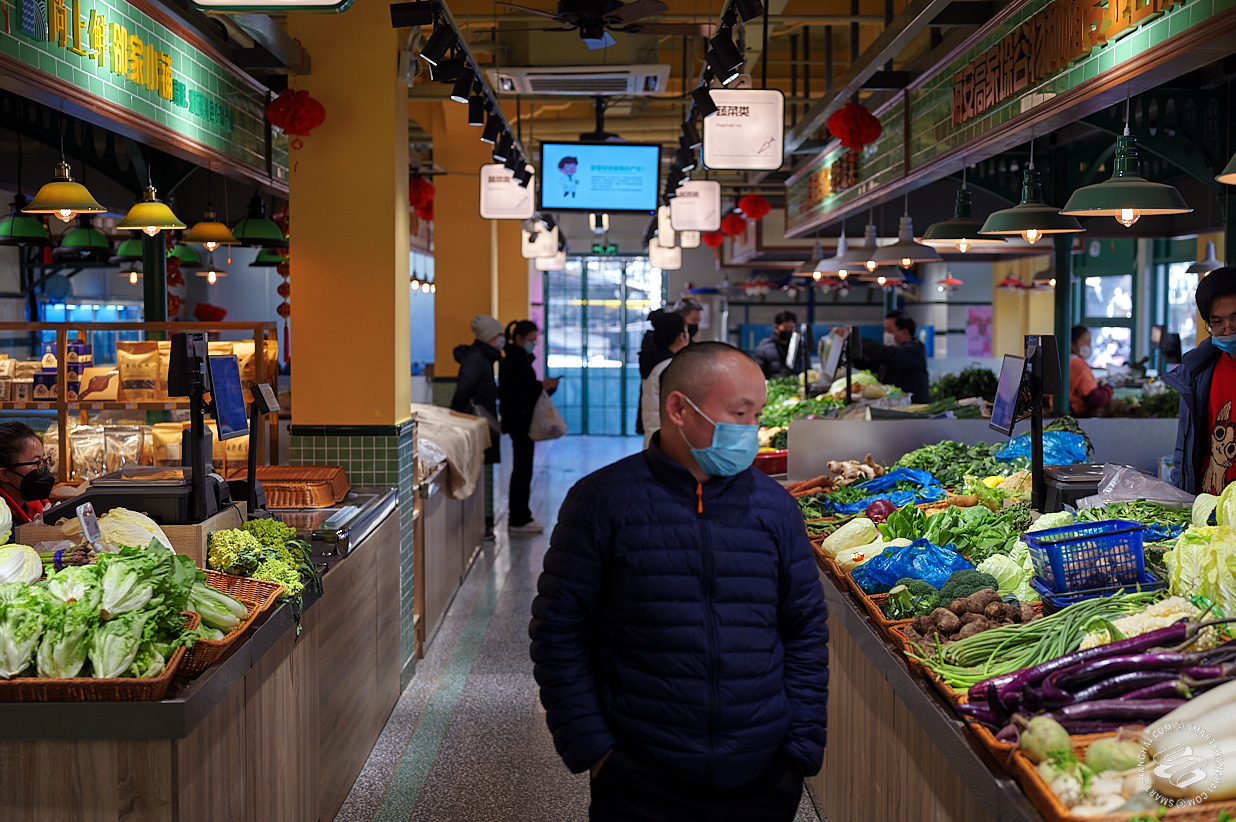 On a social level, wet markets are important as a way to pass down cultural food knowledge. Stallholders often make recommendations for which vegetables traditionally go together and how to cook them. They pass on knowledge about which vegetables are in season, coming into season or going out of season soon. When they are not being torn down, they foster long-term relationships between customers and stallholders, creating a personal bond hard to find in a supermarket.

And their business model often results in lower prices. While both supermarkets and wet markets in China often buy from the same wholesale markets, supermarkets generally bring in their vegetables the evening before they go on sale, to clean, weigh and package; wet market vendors, who are individual small business owners, start their day at 4am with a trip to the wholesale market before a 6am start at the wet market, and spend their day pruning and freshening vegetables as they sell. The result is that stallholders’ vegetables and produce look fresher, and their reduced overhead (supermarkets incur high labor, rent and stocking fees) translates into lower prices. 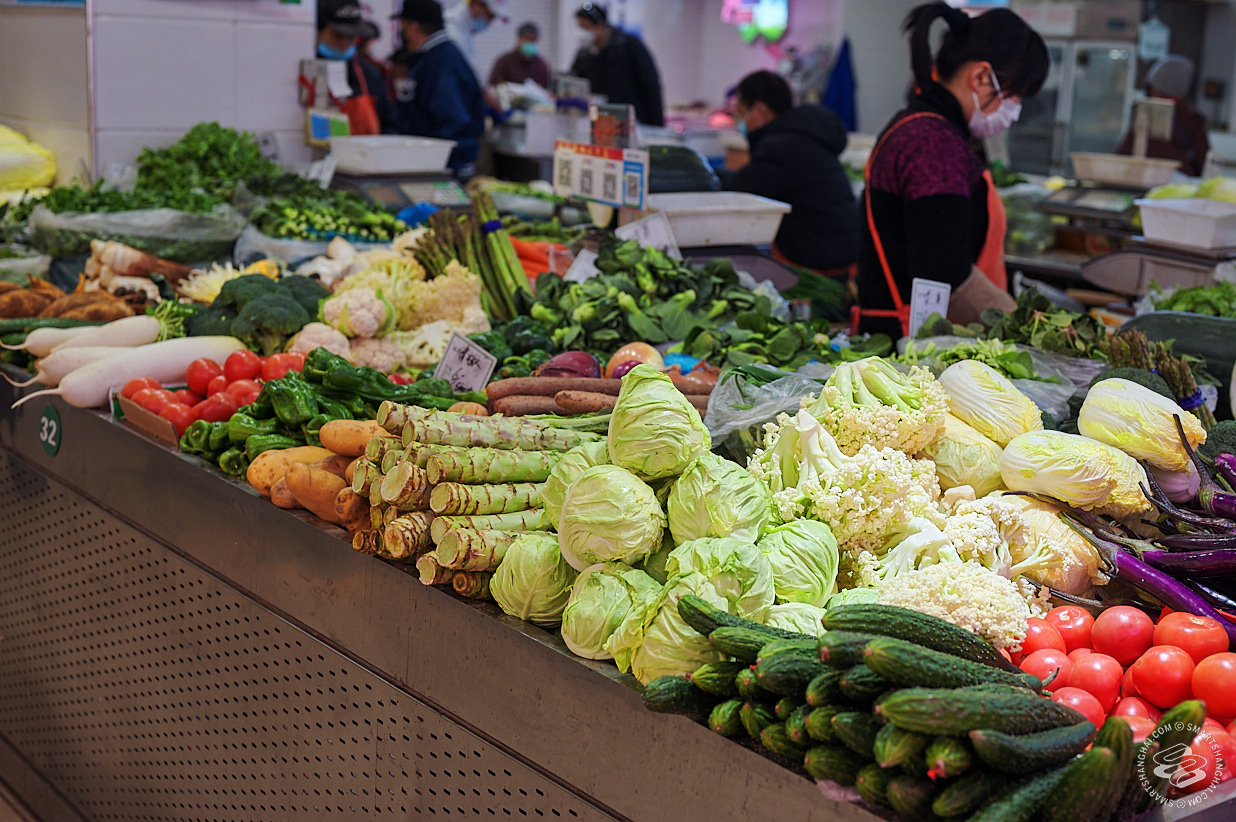 The Mingyan wet market at Yanqing Lu and Donghu Lu

On a broader level, having wet markets available is good for the health of the neighborhood children, particularly of low-income families. According to a 2012 study based on the longitudinal China Health and Nutrition Survey (CHNS) data, the density of wet markets in China positively predicted children’s nutritional intake. The study found that when families have access to wet markets, the children eat less manufactured supermarket food, which has higher amounts of added salt and sugar. The markets also provide one of a limited number of avenues for rural migrants to make a relatively high income and move up the social ladder.

The issue, according to numerous op-ed articles, is when wildlife is introduced into this system. Rightly, critics note that bringing stressed animals of different species, who are all shedding different diseases, into close proximity and without any supervision, is, let’s say, not good for hygiene. At worst, it may provide the breeding ground for COVID-19, SARS and the Avian Flu.

While the attention-grabbing koala and wolf cub price list touted in the media is likely exaggerated, the general point remains true: many parts of China have a taste for exotic meat. In my 15 years in this country, I’ve been offered camel hump at a major Chinese chain, muntjac at a secret wild game restaurant in Pudong and legal peacock in Yunnan, have watched a bamboo rat butchered and cooked by a popular online chef, and seen a crocodile, mouth tied shut, hidden under a bench at a downtown Shanghai seafood market. Snake is more than a delicacy; by one count, Shanghai has more than 800 shops serving water snakes, king snakes and more. 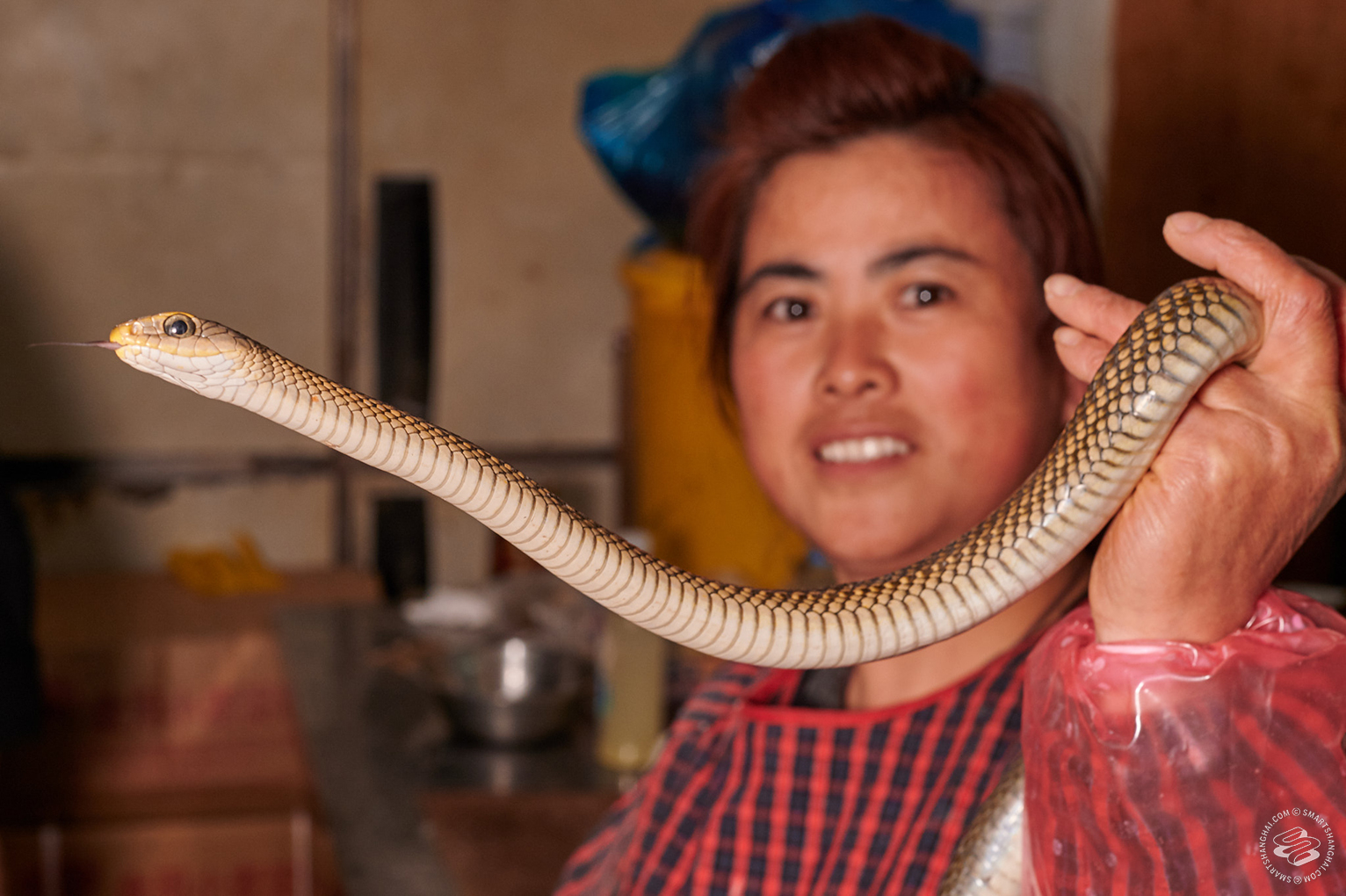 Fatty's Snake Shop: one of Shanghai's most well-loved snake restaurants

And yet, a taste for the exotic is not the problem. Where I’m from, in south Florida, people now hunt backyards in search of iguanas for the dinner table; restaurants serve BBQ alligator ribs; and it’s possible to order overnight delivery of muskrat, bobcat and rattlesnake on the internet.

Instead, it’s China’s unwillingness to own up to its obsession with exotic meat. This is rooted in beliefs in homology extending back to The Yellow Emperor’s Inner Classics, which codified the medicinal philosophy more than 2,000 years ago (eat a penis, boost your penis); the idea that eating exotics confers wealth and status on the buyer; and the belief that certain wild animal parts have therapeutic effects (pangolin meat relieving rheumatism, for example). This lack of reckoning coupled with weak legal controls pushes the sale of even the less exotic meats such as venison and pheasant into an unregulated and unsupervised gray area.

According to the United Nations, gray areas in the wildlife trade, which mix legal and illegal species, as the Huanan market stall did, can be more dangerous than black markets. In black markets, everyone knows it's illegal. In gray markets, law-abiding consumers can confuse availability for legality.

It’s in that gray area that disease breeds, animal cruelty can thrive and wild animals are smuggled. An open and frank discussion about the eating habits, free from the stigma of eating exotic meats, would go a long way towards the eventual necessity of a regulated system from farm to abattoir, to bring these meats out of gray market and into the 21st century. Reform and streamlining of the control and management of wet markets, which often mix public and private ownership to chaotic effect, is also necessary. In the absence of unified management, hygiene and regulation can fall through the cracks, leading to illegal wildlife trading.

But let’s talk about this as a wildlife regulation problem, not a wet market problem. Not that long ago, chickens in China's wet markets were sold live, killed on the spot. Avian Flu and the subsequent elimination of live chickens from wet markets on a national-scale is proof that the country has the regulatory power and ability to execute urgent health policy when it needs to. Exotic meat does not need to be regulated out of existence, as a pending bill in China's legislature promises, but needs a more nuanced and comprehensive approach. A blanket ban will only push it underground. Education, regulation, a supervised farm network for exotic animals and explicitly legal channels for consumers would go a long way towards wiping out the gray market.

China’s wet markets are now more vital and needed than ever, for its eaters, its children and the fraying social fabric of a country grappling with the world’s largest wave of urbanization.

If the trend of supermarkets in the West takes root in China, they too will begin selling more processed foods than produce, high in calories, salt and sugar. Wet markets sell ingredients. 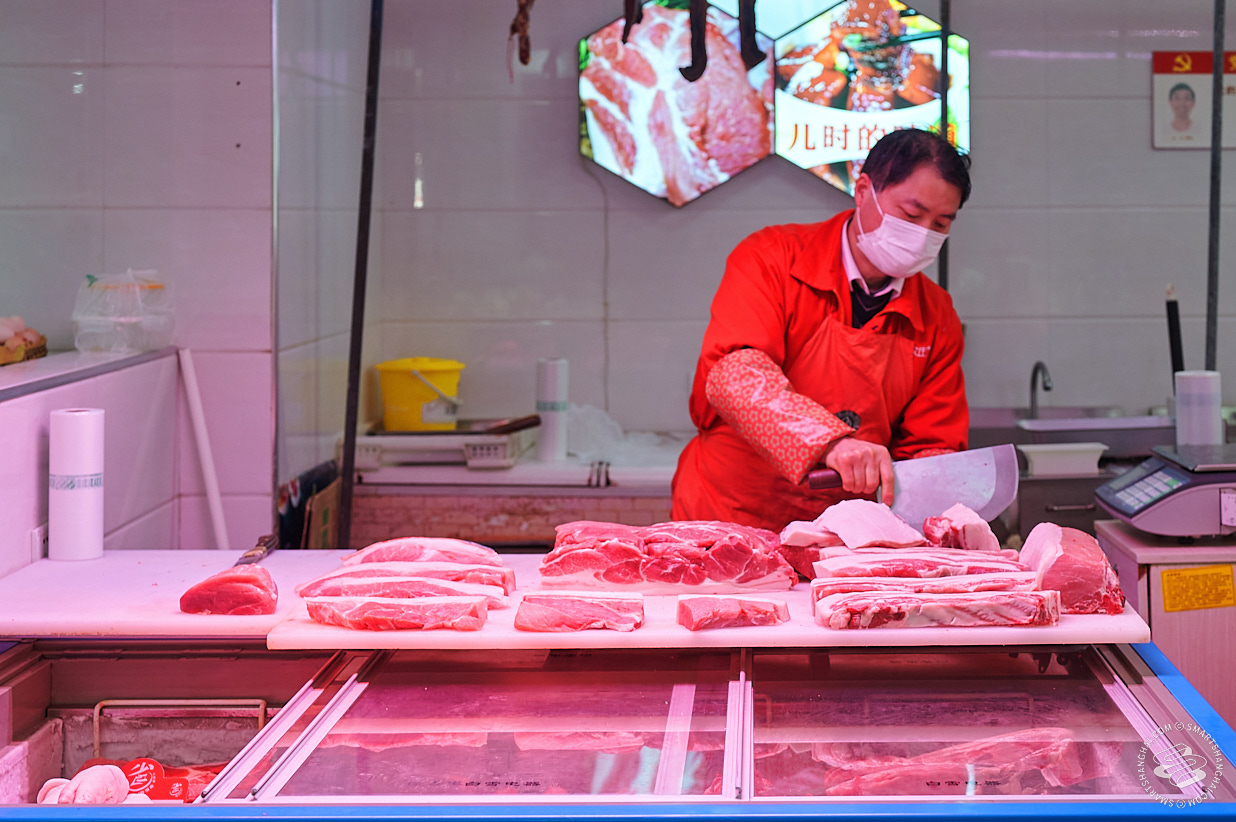 This is especially important as a second wave of modern supermarkets is now cropping up across China. Alibaba has launched a successful chain of online/offline hybrid supermarkets under the Hema brand, while JD.com has done the same with its 7Fresh brand. Right now, China’s supermarket industry remains highly fragmented and regional, with no major national brand dominating like those in America and the UK. But eventually there will be market consolidation, and with that, a further streamlining of China’s food supply: produce optimized for transportability, not flavor, a higher proportion of high-salt and high-fat prepared food, a diminished range of seasonal and delicate produce and the further loss of food knowledge transmitted where people buy their food.

Wet markets are a reserve of diversity in an age of consolidation and streamlining and a hedge against the supermarketization of China’s food. It’s possible to buy many things in China’s wet markets. A live koala need not be one of them.