The World of Milk Tea is Vast, Full of Money and Delicious. Start Here.

Milk tea is — like all of Shanghai — changing very fast. “Bubble tea” is old news. Dairy powder is gone. Even cheese tea is not cutting-edge anymore. And there are BILLIONS of rmb in investment flooding the industry — three billion in investment just since 2018. Last year, the milk tea market was estimated at 50 billion rmb. Everyone is racing to be next the wanghong and come up with a new idea in tea no one has seen before. The big chains are just trying to stay relevant.

What’s that mean for you, the afternoon milk tea drinker? More choice. Choice like never before. Options for milk tea beginners and milk tea gurus.

So we wrote this guide, with the help of ka men (咖门), a group of Chinese writers who write only about coffee and milk tea. The beginning of the guide is for milk tea novices. If you’re an advanced drinker looking for new shops, scroll to the end.

No-calorie sugar: Most often called ling ka tang (零卡糖). Not every shop has it.
Stevia: Tian ju tang (甜菊糖). A calorie-free sweetener made from stevia leaves. Only at Heytea.
Less sugar: Shao tang (少糖). About 70% of the regular amount of sugar.
Half sugar : Ban tang (半糖). 50% of the regular amount of sugar.
Cheese tea: Tea drink made with nai gai (奶盖) — or “milk cover ”

These are the tea shops that have won the most investment, and that Big Money Tea really thinks are going to (or already do) dominate the industry. 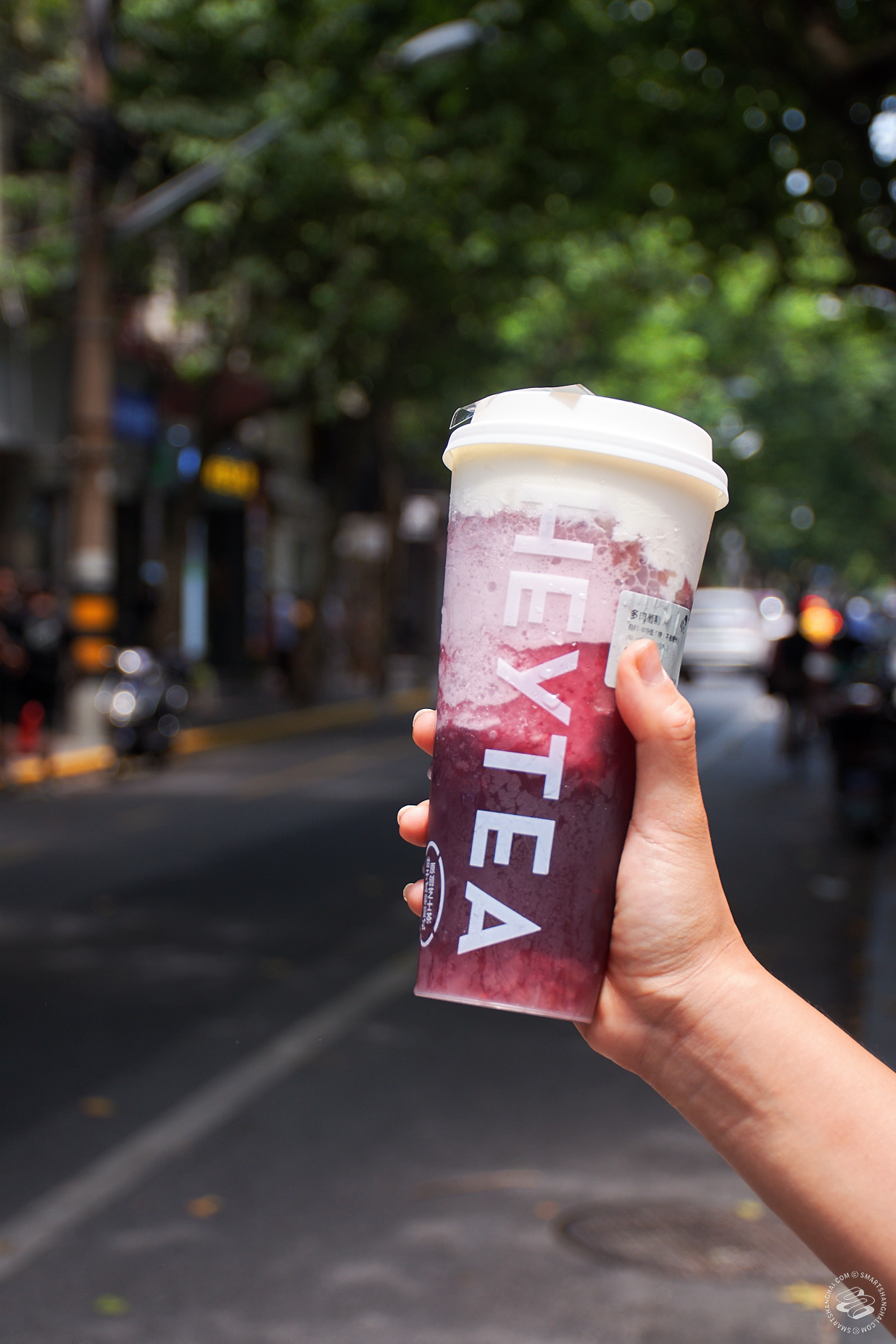 The story: Founded in 2012 by 29-year-old Nie Yunchen (who’s now on the Forbes China 30 Under 30 list) in Guangdong province. Originally named “ROYALTEA”, they changed their name to Heytea (喜茶, Xi Cha) because of all the copycats. It’s the hottest chain in China right now. You can’t even go to the store like a normal person — you have to order like an hour ahead of time and then go pick it up.

When it first opened in Shanghai, the lines at the People’s Square store were at least three hours long. Now there are more than 80 in Shanghai, and more than 500 across China. They are not a franchise; they directly manage every store.

The investment: One hundred million rmb in 2016 from IDG Capital and a private investor, and then another 400 million rmb later.

Heytea built their reputation on Cheezo Tea, the “cheese tea” that drew international and condemnation (until people actually tried it and realized it’s delicious). The cheese is a thick layer of foamy, creamy and slightly salty cheese — more like cheesecake foam than a gouda —floating on top of freshly brewed whole-leaf tea from Heytea’s own farm. Then they started a second trend: combining tea drinks with fresh, seasonal fruits.

The Very Grape Cheezo is a very photogenic purple and cream color, made with fresh grape puree. For an extra one rmb, you can replace the sugar with stevia. 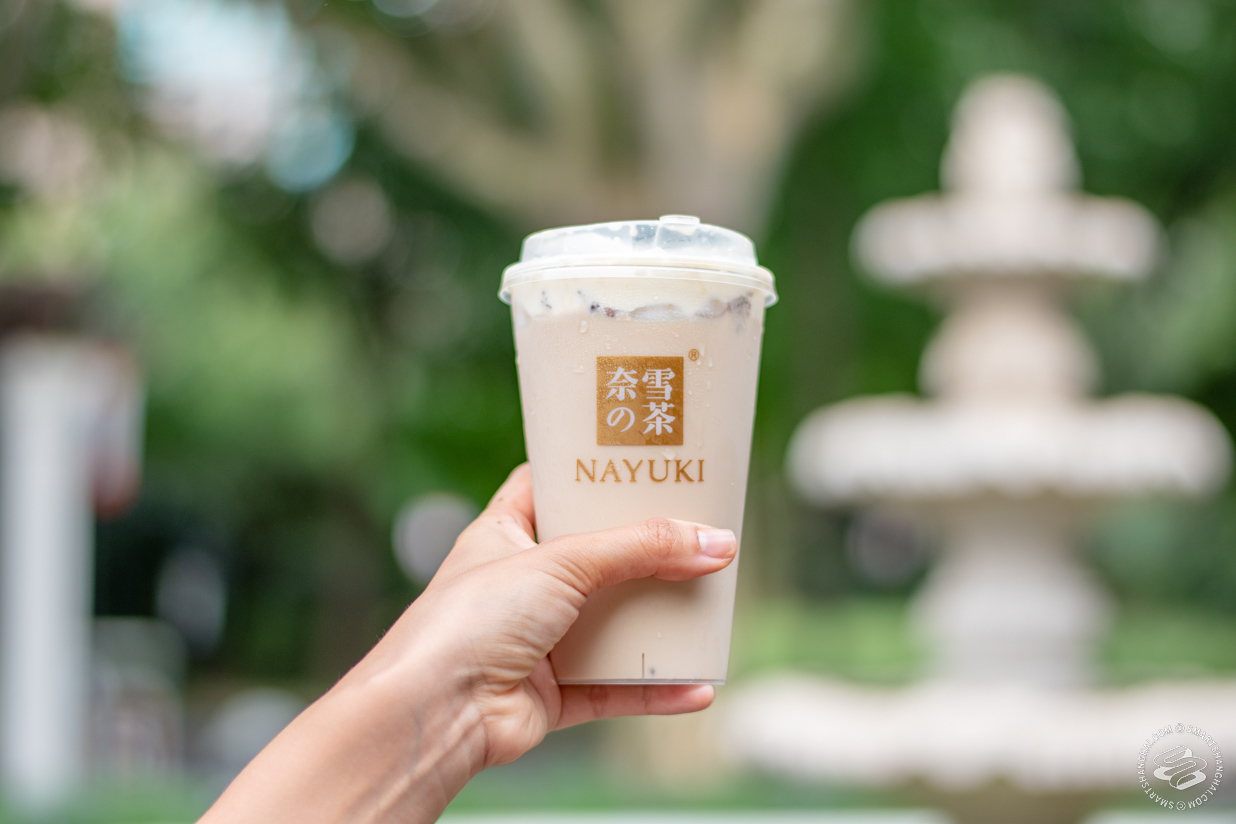 The story: Nayuki’s Tea (奈雪の茶) started in Shenzhen in 2016 and now has 350+ locations in China. Like Heytea, all the stores are directly managed (no franchises). It caters to female customers, with a plastic cup specifically designed to be taller, slimmer and easier to hold. Even the little plastic plug on the top is in the shape of a heart. They specialize in tea drinks made with fresh fruit and have a sideline in bakery products. Oh, and a bar: they opened BlaBlaBar in Shanghai in early 2020.

Comes with a layer of extra creamy and slightly salty cheese foam. Even better than Heytea’s famous Cheezo. Ask for the calorie-free sugar. The oolong tea is strong and smoky, cutting right through the milk. 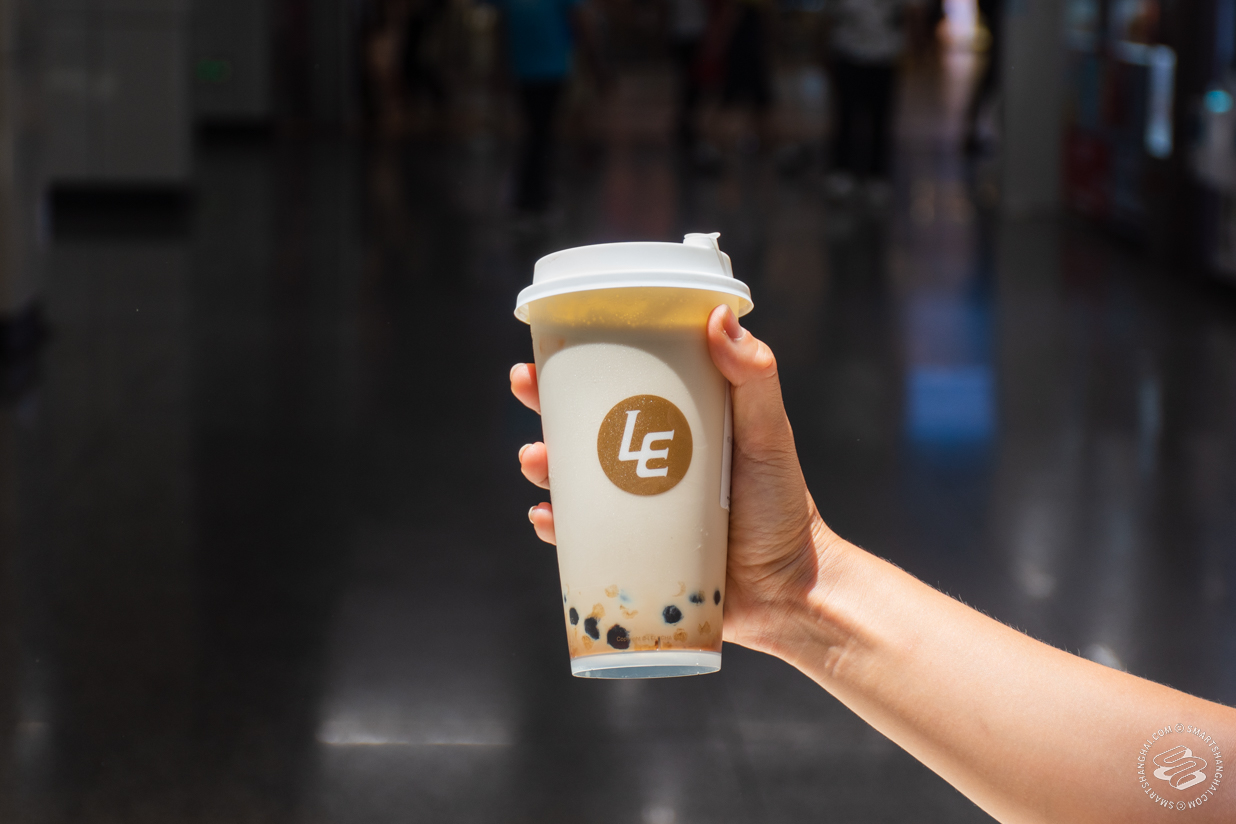 The story: Lelecha’s first store opened in 2016 near Fudan University. They followed Nayuki’s Tea in doing bakery products as well, and now have their own line just for brioche toast. They are best-known for starting the “Dirty” tea and “Dirty” bread trend, where the tea or bread is absolutely filthy with cocoa powder.

The investment: In 2019, they received several hundred million rmb worth of funding from several investors.

Expect a half-hour wait time for the drink. This place gets a crazy amount of delivery orders as well. Lelecha uses fresh milk and you can taste it. Especially delicious with the brown sugar tapioca pearls at the bottom of the drink.

These chains aren’t new but have mostly stood the test of time. They are very nostalgic for a generation of young Shanghainese, who grew up drinking these teas after school. 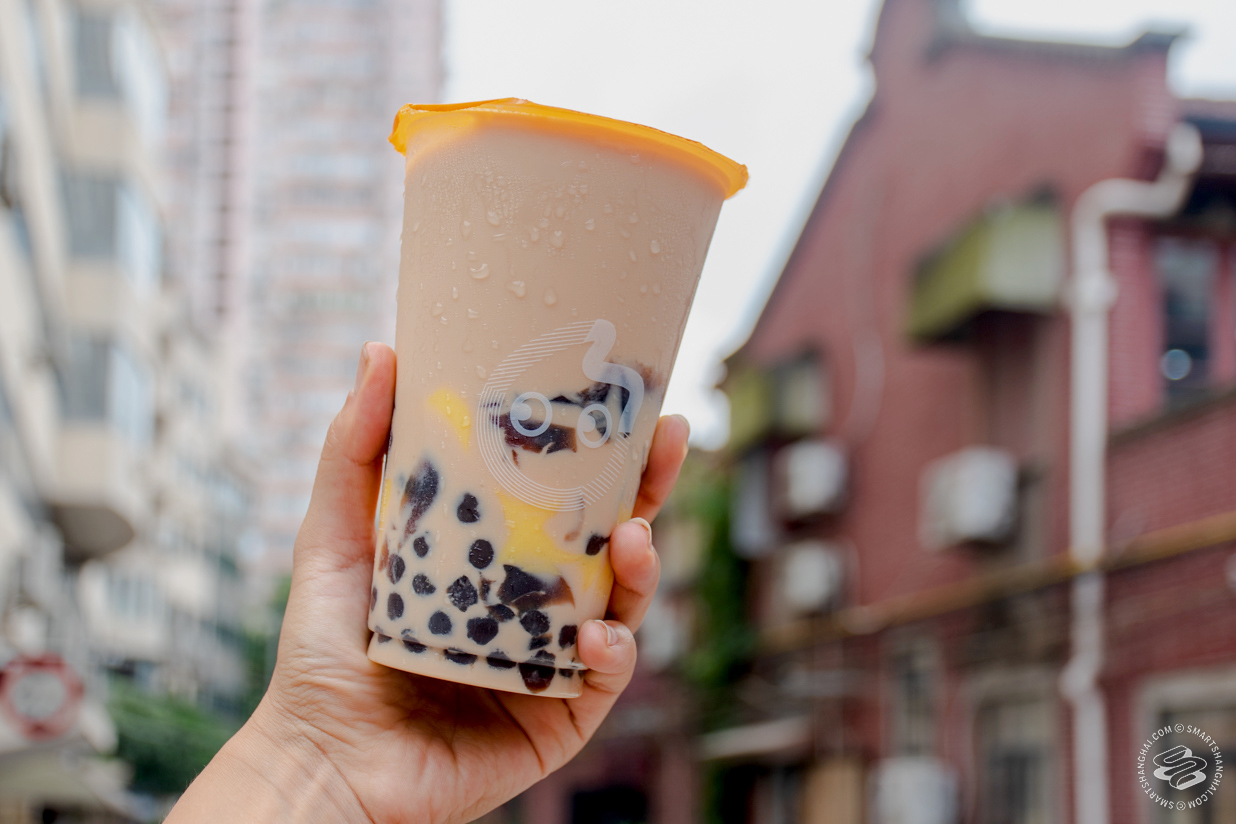 The story: A big franchise from Taiwan. They now have thousands of stores in almost every city in China. Too many to keep count. Several years ago they expanded into Southeast Asia, the US and Europe. Coco is one of the OGs that began using fresh milk instead of dairy powder. A couple of years ago, they added coffee.

Satisfaction at 11rmb. The cheap black tea is strong, the milk is creamy and there’s a lot of sugar. The three brothers in this drink are tapioca pearls, herbal jelly and milk pudding. Can’t go wrong. 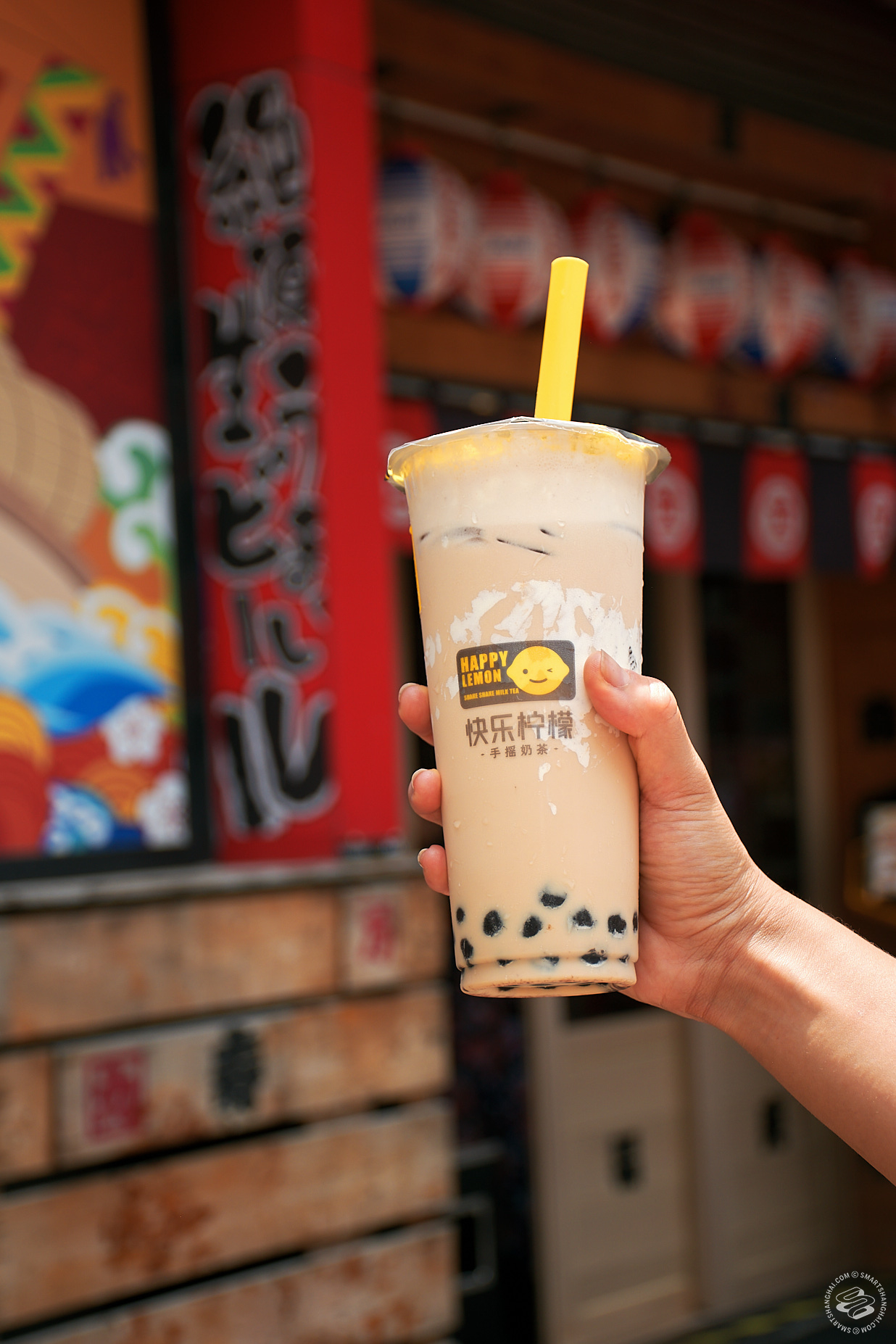 This old-school, Taiwanese-style franchise has been around for more than a decade. First-wave milk tea pioneer. Opened back in 2006 in Shanghai, Happy Lemon now has over 1,000 stores in China and beyond. Their signature is a hand-shaken iced tea with fresh lemon, hence the name.

The brand is most-known for its “baked milk tea (烤奶茶)” — broiled black tea and tapioca balls soaked in brown sugar syrup — but it’s no longer on the menu. Shame. There used to be more Happy Lemon stores around town but they have slowly died out in downtown Shanghai as newer, more versatile tea shops take over the market.

An old-fashioned bubble tea with a sugary whipped cream, plus tapioca pearls. It’s usually made with dairy powder, so tastes extra creamy. Upgrade to real milk for a softer flavor. 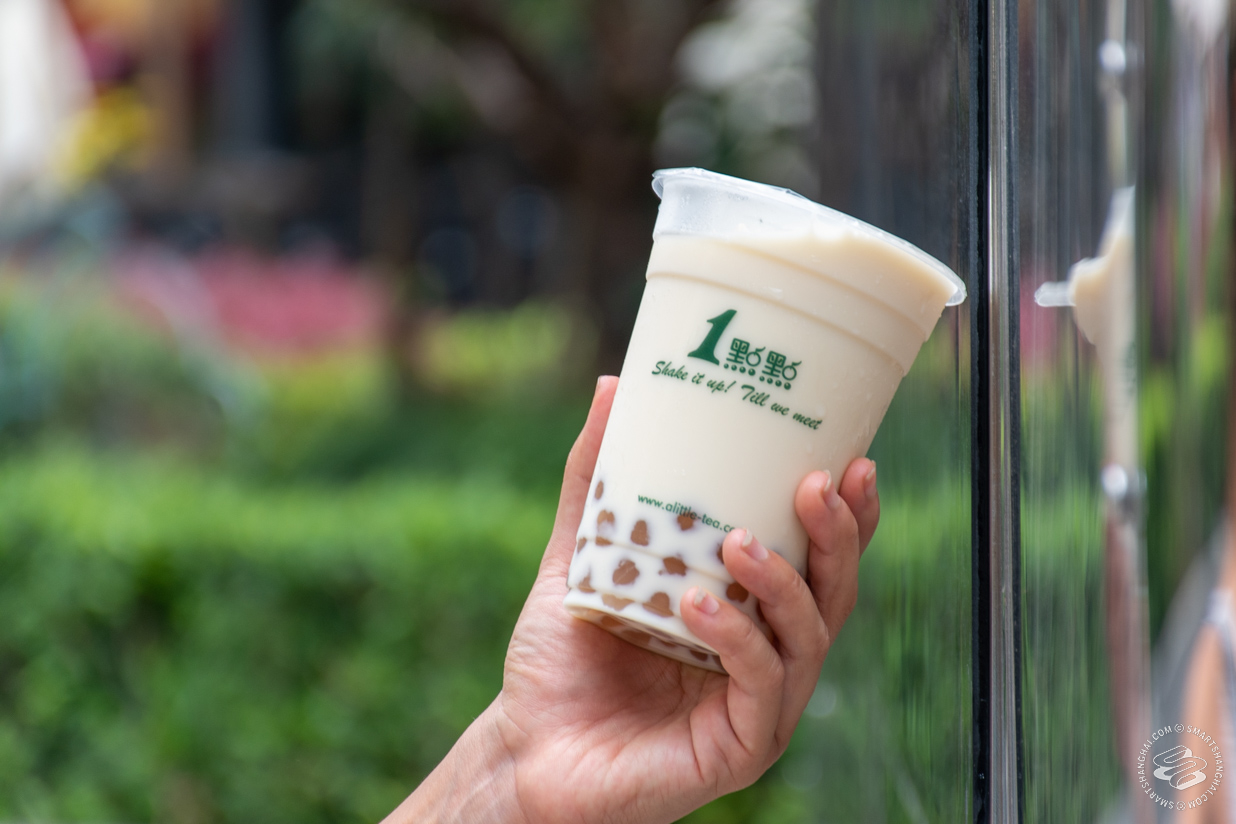 The story: Taiwanese brand founded in 1994 that came to Shanghai in 2010. It’s relatively new. They became crazy popular in 2016 or so when they opened up to franchisees. It’s cheap and delicious, plus they have lots of flavors; Yi Dian Dian is now almost a synonym for milk tea. Their tea is brewed with broken leaves but the quality is surprisingly good.

Simple and delicious. Ask for the tea latte (so that it’s mixed with real milk) and just minimal sugar. The Light Oolong is probably the best. Gentle, very flowery, just a little bit astringent.

For the tea and the photos of you having the tea. Places for the Moments. 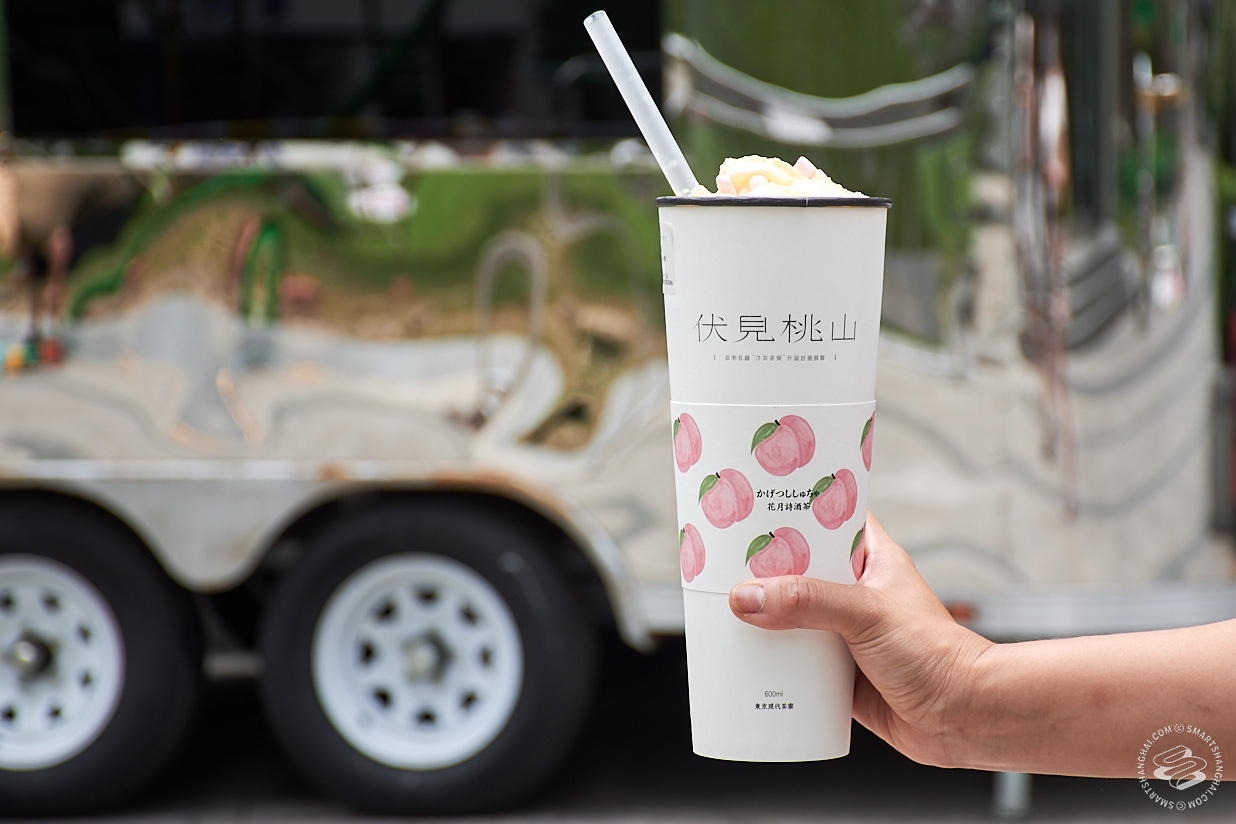 Fushimi Momoyama — “Peach Mountain” — are from Nanjing not Japan and were only founded in 2017. Their angle is the peach. The packaging and presentation of the drinks are both very cute and very pink. They also focus heavily on summer drinks with fresh peaches. They make a good White Peach Oolong (白桃乌龙) and a Jasmine Green (茉莉毛尖).

A monstrous 600ml cup with a big scoop of whipped cream, and several pinkish marshmallows. The appearance is deceptive but this is a seriously delicious tea base. Fresh, aromatic, with a strong peach flavor that doesn’t feel artificial at all. The story: The very uncommon Chinese character “厝 (cuo)” means “home” in the Taiwanese dialect. This chain franchise has a nostalgic interior design: wooden beams and fabric drapes make it feel like an old village house. They are known for Chinese-style ingredients like sesame, silk tofu and a whimsical blue-colored butterfly pea jelly.

It’s a light cup of milk tea. Not too milky, not too strong. The silk tofu floats in the middle of the drink but is more about texture than taste. The sesame taro balls are like small sweet dumplings. Both afternoon tea and snack. The story: Shanghainese brand first opened in 2013 near People’s Square. It re-branded in 2017 and then went viral. They’ve got an interesting expansion strategy — out of the 1,500+ Auntie Jenny (沪上阿姨) stores across the country, only two are in downtown Shanghai. They are known for making milk tea with cooked rice, grains and millet.

Take big sips with the straw to get the grain at the bottom of the cup. You can actually taste the black sticky rice and adzuki beans, which are cooked with no sugar. Goes well with the slightly sweetened milk tea. Super filling. The story: Chun Feng (椿风) make tea drinks with traditional Chinese herbs and medicine. They only started in 2019 but hit immediately as a healthy alternative, using ingredients like loquat, ginseng, bird’s nest, peach gum and black wolfberry. Their menu changes very often, in line with the seasons.

It’s not a milk tea, but a fruit smoothie. The brand does milk teas, but this icy peach drink made with black tea is one of their best. Mixed with ice cubes, peach puree and peach juice. The peach gum is chewy and bouncy. Light, healthy, looks great — the perfect summer drink.

For people with Ph.D’s in milk teas. The story: WeDrink (微醺) adds alcohol to tea drinks. Don’t expect a good, strong shot though. They make three types of tea drinks with spirits varying in strength: Chinese rice wine, flavored liqueur (Bailey’s or coconut rum), and spirits (baijiu and vodka). Some items on the menu are just a light cocktail, but some recipes made with tea are original and quite interesting. As far as we know, they were the first to do this.

It’s milk tea plus 30ml of Bailey’s. Weak, but creamy and sugary with a bit of coffee flavor. Get their coffee jelly — it’s free and and it’s the highlight of this otherwise regular drink. Better if you pay six rmb for another shot of alcohol. 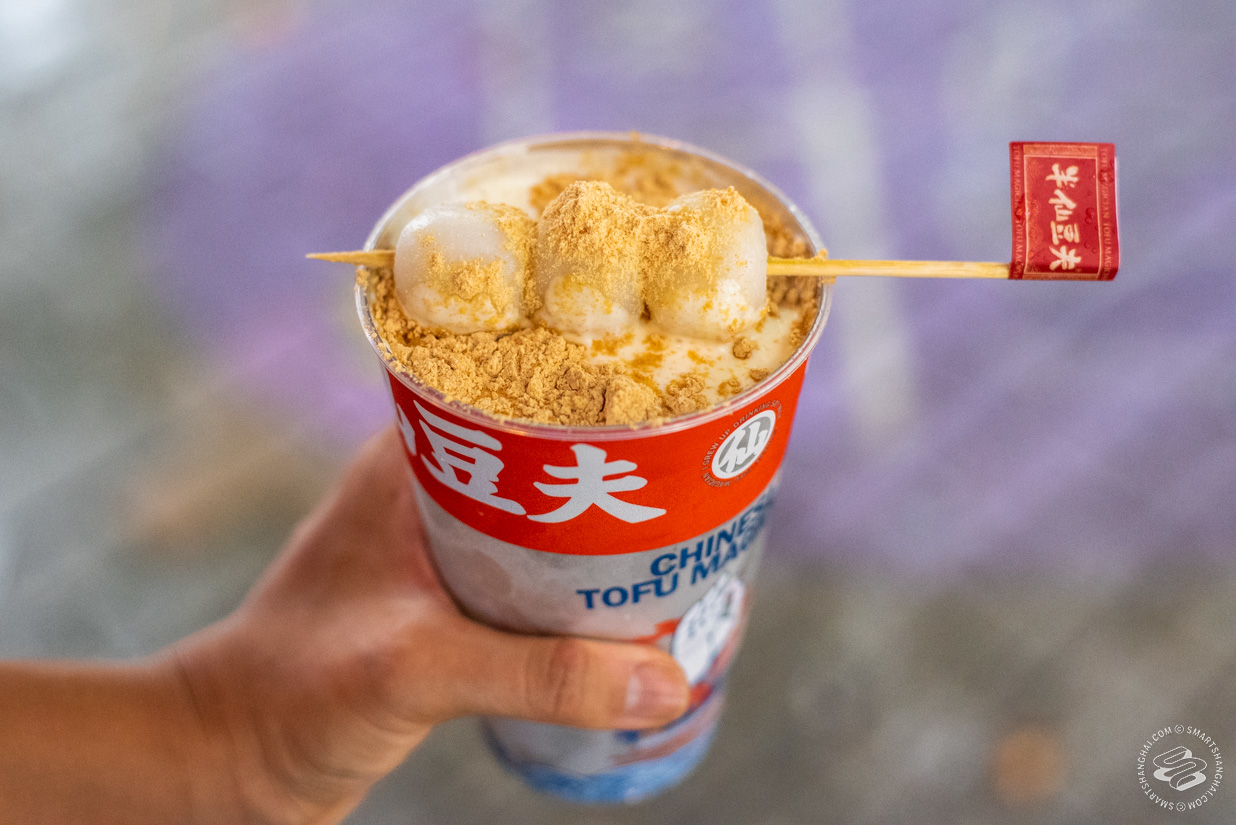 The story: Chinese Tofu Magician (半仙豆夫) is a chain from Changsha, Hunan. They specialize in soymilk-based tea drinks and Chinese-style dessert made with tofu. Very focused. Vegan-friendly. There’s also a soymilk ice cream. They started a trend with the soymilk, and now it seems like every shop in Shanghai is doing the same.

A drink and a bite. Chew the glutinous rice ball before you sip the drink. The soymilk is thick but needs some sugar — don't go sugar free here. An afternoon refresher, or a nice breakfast drink when served hot. 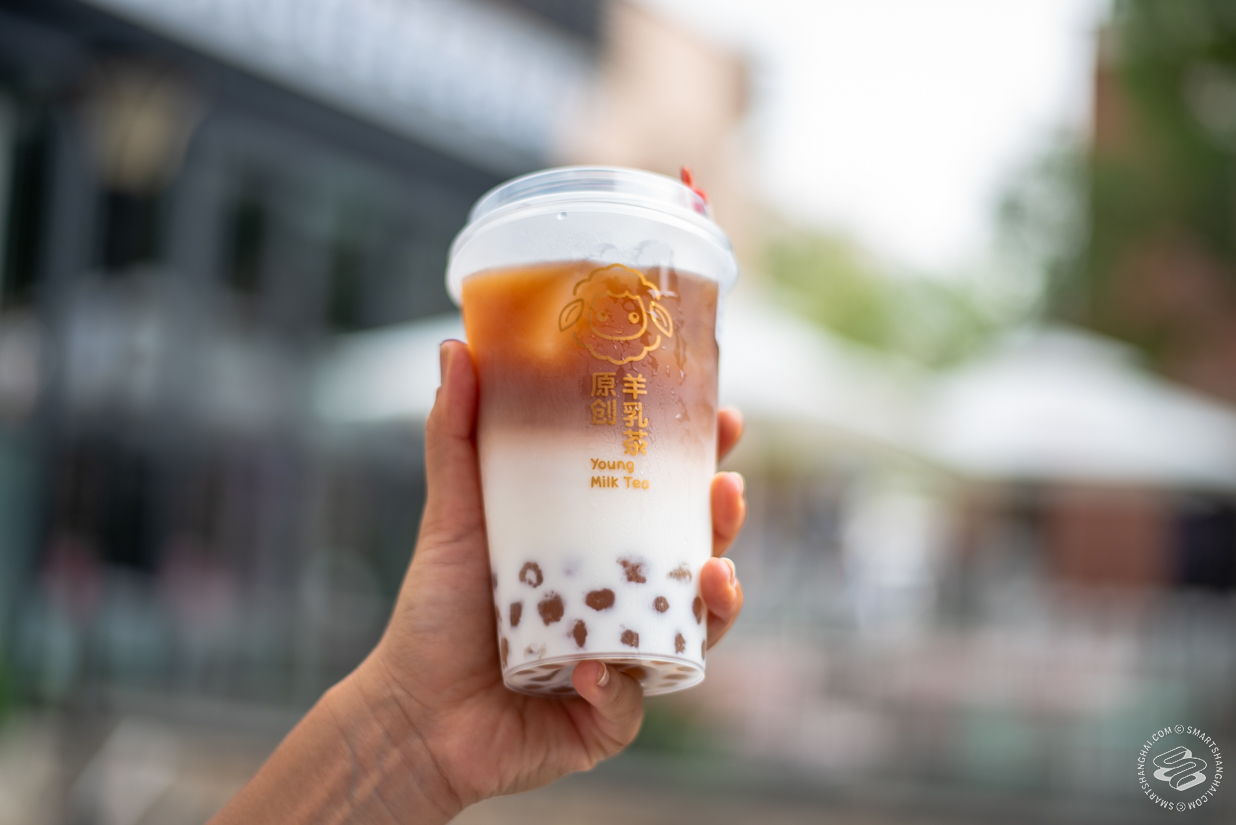 The story: Far, far away in Yangpu, but worth the trip down if you’re a fan of milk tea. Apart from a good selection of fruit tea and smoothies, TeaYeah (点叶) make their milk tea drinks with goat milk. Not seen this anywhere else. Will this tiny shop start an enormous line of copycats?

Ice cold pu'er is surprisingly good. The pasteurized goat milk is sweet, extra creamy and mild. They go very well together — this was outstanding and the most memorable of all the milk teas on this list.