We Toured Some of Shanghai's Most Popular Cantonese Dessert Shops

Four places to cool off with nut soups, tropical fruits and slippery jellies.
By Christopher St Cavish
2020-08-06 12:00:00
Photos: Brandon McGhee
China's best desserts are Cantonese. There, I said it. It's not controversial, right? Other regional cuisines might have a nice dessert dish or two, and I'm not knocking them, but only the Cantonese have a dessert culture. I think that's a settled argument.

I love them but I'm not an expert. Brian Tan is. The Malaysian pastry chef opened the city's first independent tongsui shop, Tang Pin, in 2011, a time when the dessert field was dominated by Hui Lau Shan and the like doing HK mango desserts and Xian Yu Xian doing Taiwanese taro desserts. Tang Pin focused strongly on durian and used Tan's background as a Western-style pastry chef to find new methods for classic desserts, before closing a few years back.

These days, he runs Gourmet Library in Xujiahui, a food-focused event space and private kitchen. I caught him on a slow weekday and enlisted his expertise for an afternoon tour of a few of Shanghai's more popular Cantonese tongsui shops. 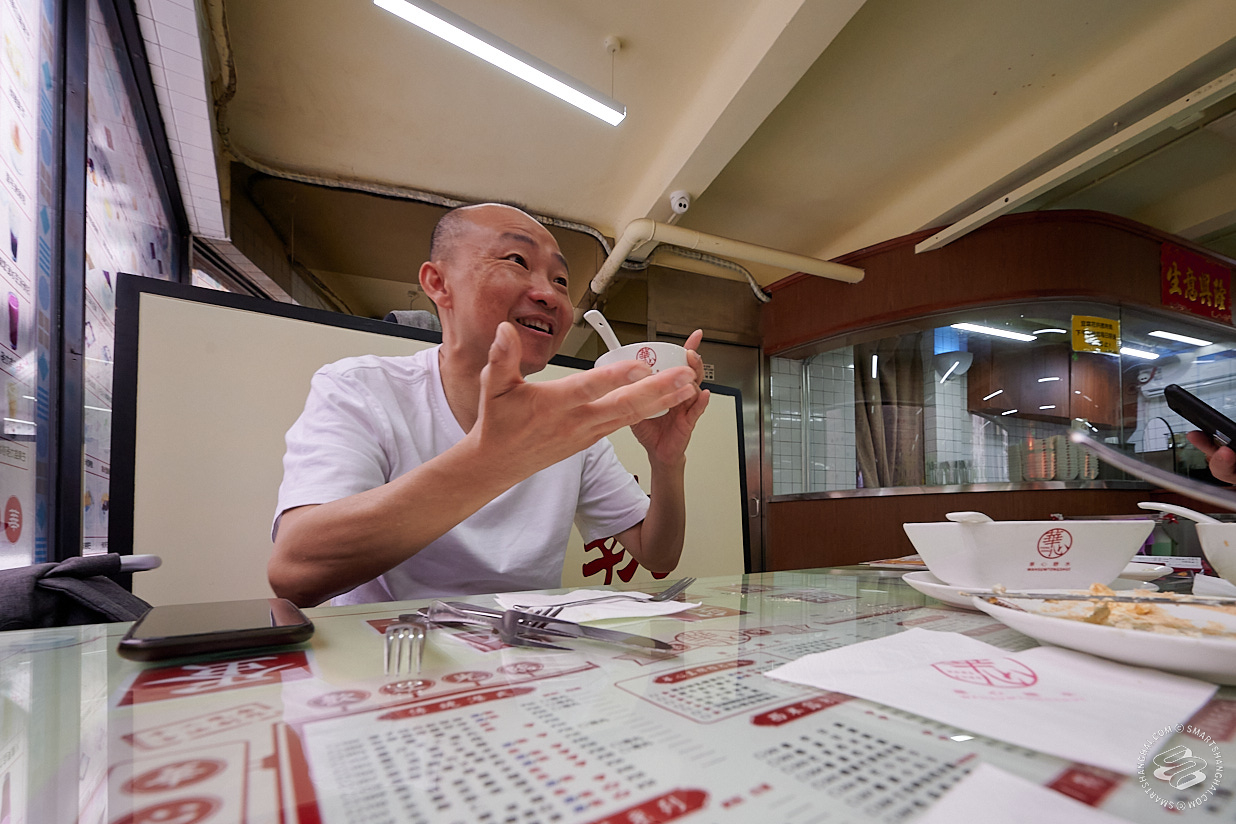 Wait, Wait, What is Tongsui?

糖水. Tangshui. "Sugar, water". The Cantonese pronunciation. As a general category, tongsui are meant to be refreshing soups you drink after dinner to help with digestion. They generally have medicinal roots. Some people say they were initially eaten by royalty, and then spread to the people around the Song dynasty. Others say they are from the Tang dynasty, when ice sellers added sugar to their ice. Who knows, really. Someone needs to tease out the history. I'm too busy eating tongsui to study it.

What you need to know now are that they are somewhere between a dessert and a refresher, depending on where in Guangdong and even Guangxi they come from. In Shunde, for example, they make more custards and things like that because Shunde has a dairy industry. In Chaozhou, where they produce sugar, they are sweeter. In Guangzhou, they are less sweet, more healthy. In Guangxi, where the famous turtle shell-jelly (guilin gao) comes from, they are quite natural. Huazhou, in southwestern Guangdong, is said to be the place for tongsui. Not been, wanna go.

The OG tongsui are pretty simple, made with beans or nuts or sweet potatoes. Things like that. Then somewhere in the last 50 (?, less?) years, someone introduced a mango to a tongsui and the tropical fruit explosion was born. The modern history says yangzhi ganlu, the mango, pomelo, coconut and sago dessert that's probably the most well-known tongsui, was only invented in the 1980s by a chef at Lei Garden. Now it's common to see mango, papaya and durian as the key players. 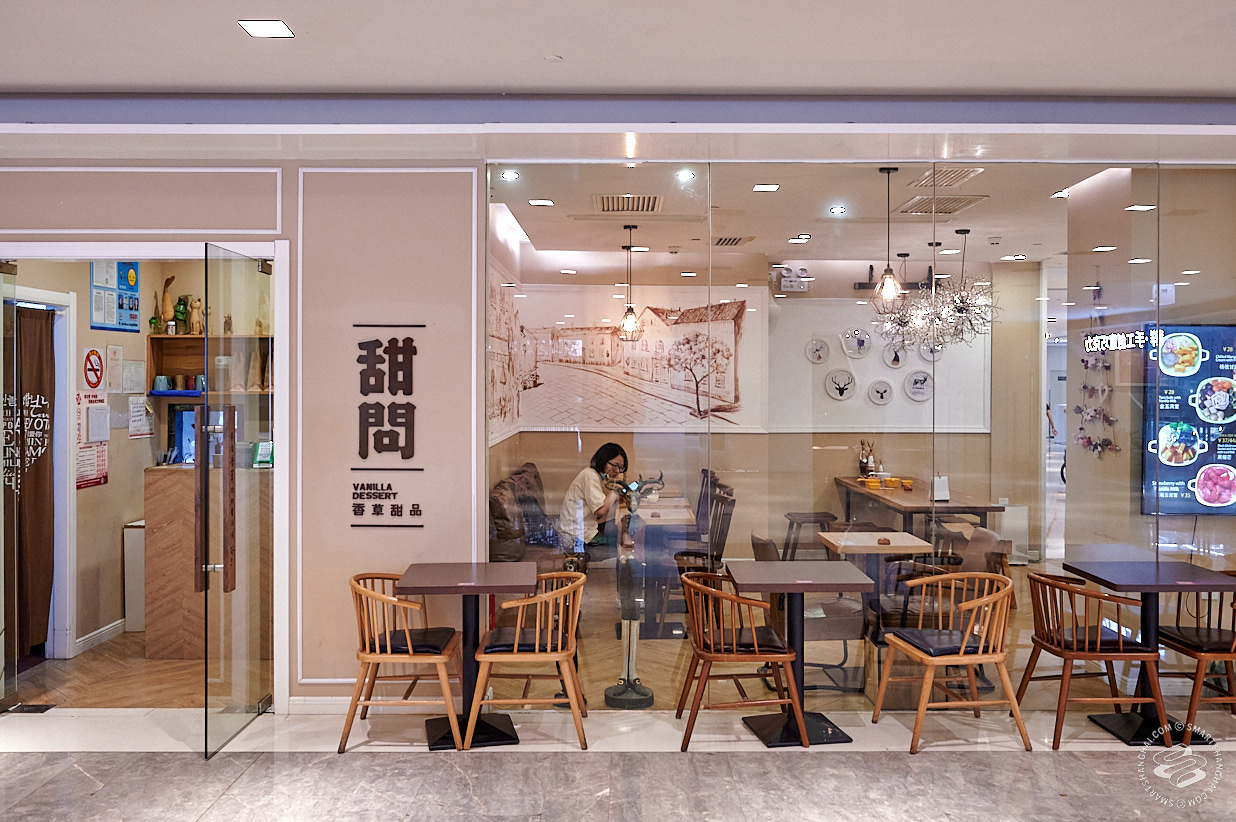 Tian Wen came recommended from a Hong Kong's friend's group chat of Cantonese foodies. We expected a lot and made it our first stop. The small chain (four locations in Shanghai) is about five years old, and focuses on vanilla-flavored desserts — there is a sign on the tables saying, "those small black things in your dessert are vanilla seeds" to head off freaked-out customers — and Cantonese classics. 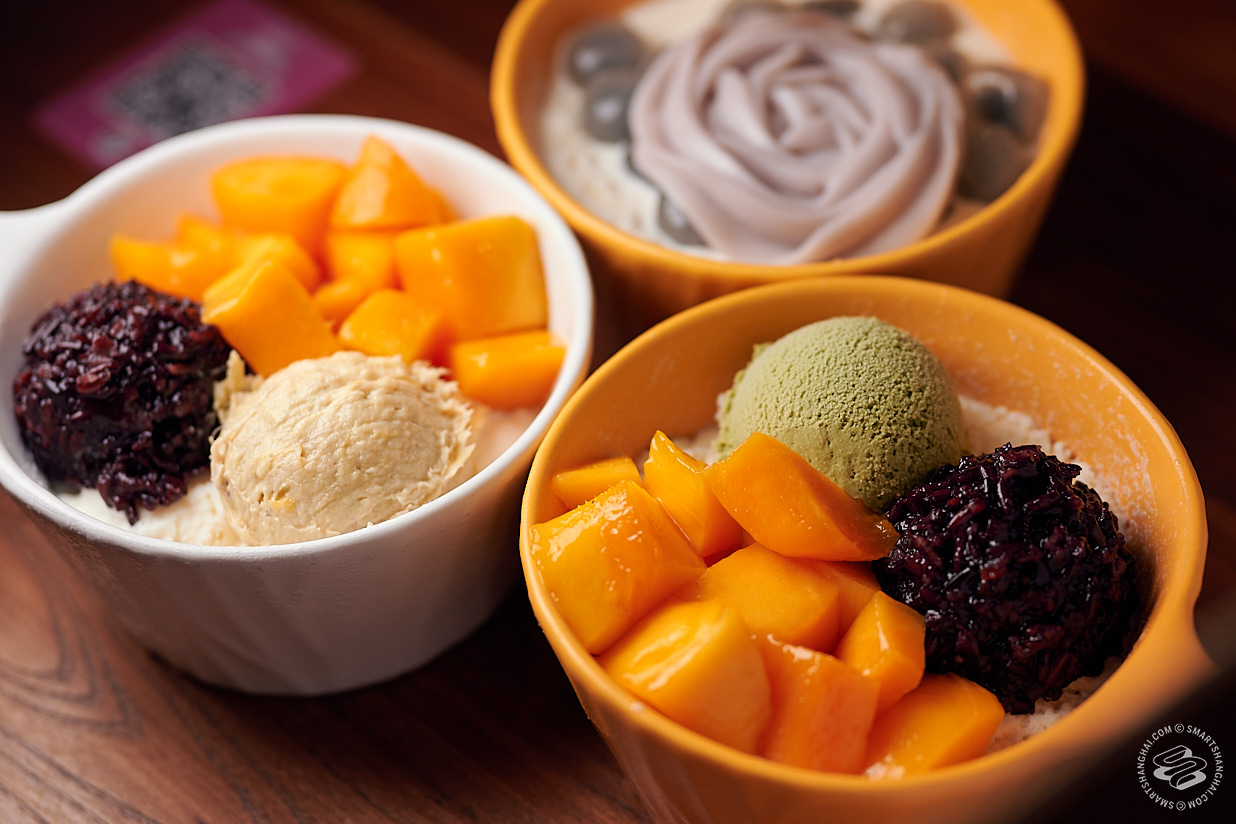 We went to the small corner shop inside the ailing Fuxing SOHO retail basement and ordered three desserts. One was a taro and glutinous black sesame dumpling thing in soup; and two were a little similar, with mango, black sticky rice, a base of a plain milk ice-type thing (like a blended bing sha), and then a scoop of something on top. We did green tea on one and durian on the second. Probably should have diversified.

It was nice that the durian had a choice of three different varieties — Malaysian D24, Thai Golden Pillow (金枕头) and the Malaysian Musang King, in order of escalating price — and the durian itself (Musang King of course) was creamy but pungent. The rest was underwhelming; Tian Wen turned out to be our least favorite of the shops, not least because of how depressing it is to eat dessert in a half-vacant basement mall with bad lighting. So we moved on. 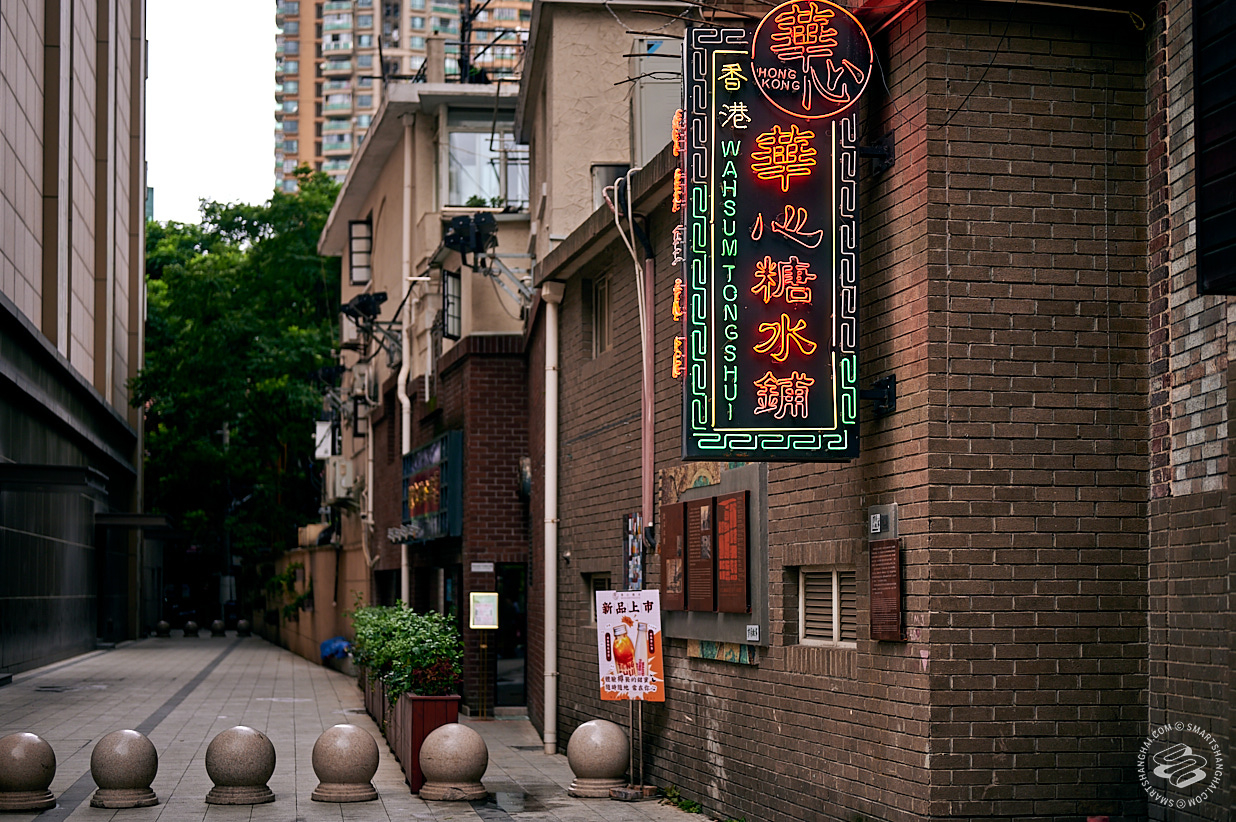 Wahsum is from Hong Kong and came to Shanghai in 2017. Like Tian Wen, they have several locations in the city. We went to the main shop, which is just off the main dessert intersection of Shanghai: Nanjing Xi Lu and Shimen Yi Lu. The Starbucks Reserve Roastery, with its Rocco Princi pastry and bakery is on one corner, Italian gelato brand Grom is on another, Chinese dim sum takeaway Wang Jia Sha is a few seconds away, and Wahsum is just across the street from THAT, in a sliver of a space on the side of an old heritage building. 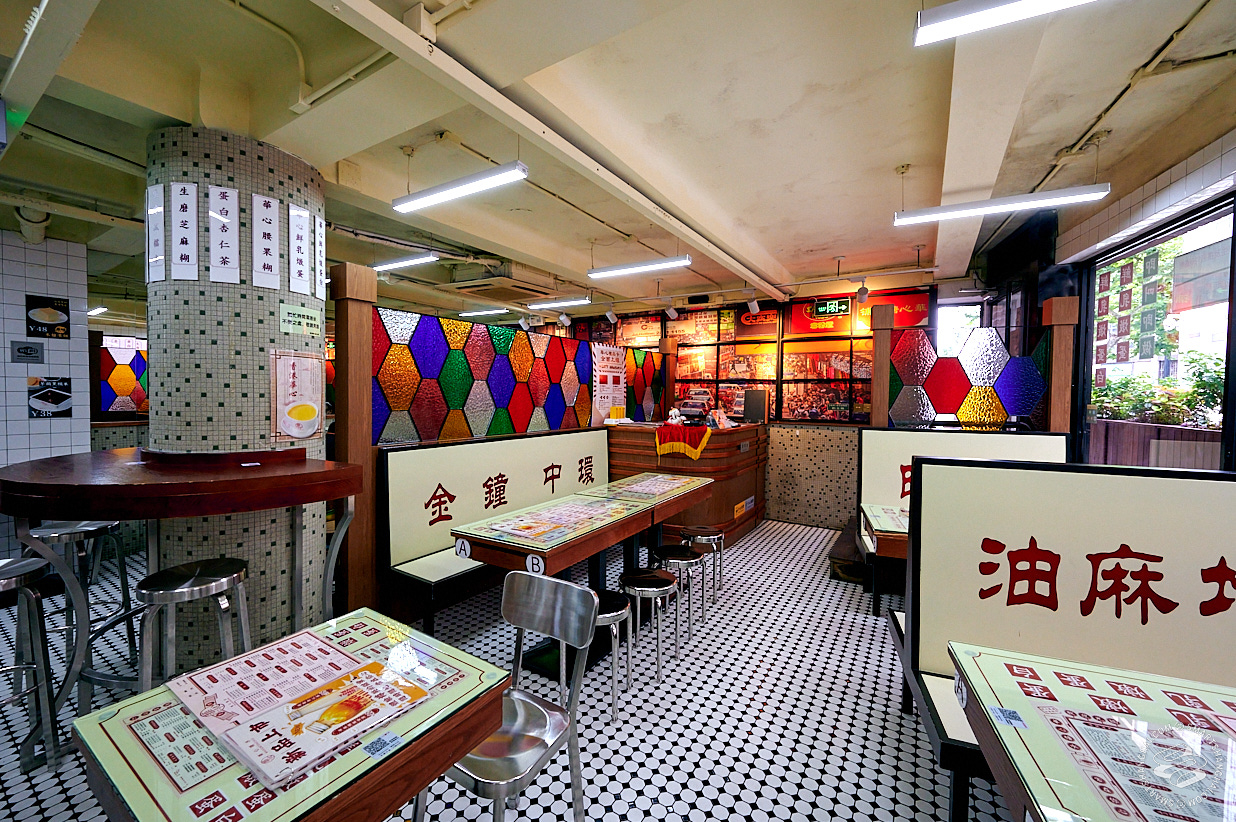 Their angle is on tradition; their best sellers are a frozen cake dusted with Horlick's powder and a milk-and-egg-white soup (鲜奶炖蛋白). Decor is meant to be "Hong Kong street" x cha canting x old school Hong Kong vibes. Every one we saw in the shop had the frozen Horlick's square on their table, so we ordered that. It's a classic soup made with boiled tofu skin and gingko nuts that Brian uses as a barometer for the quality of a tongsui shop, and a durian "cheung fen", durian rolled up in a "rice wrapper" that's actually made with gelatin these days, not the steamed rice sheet that the name implies. (Inside info from Brian there.) 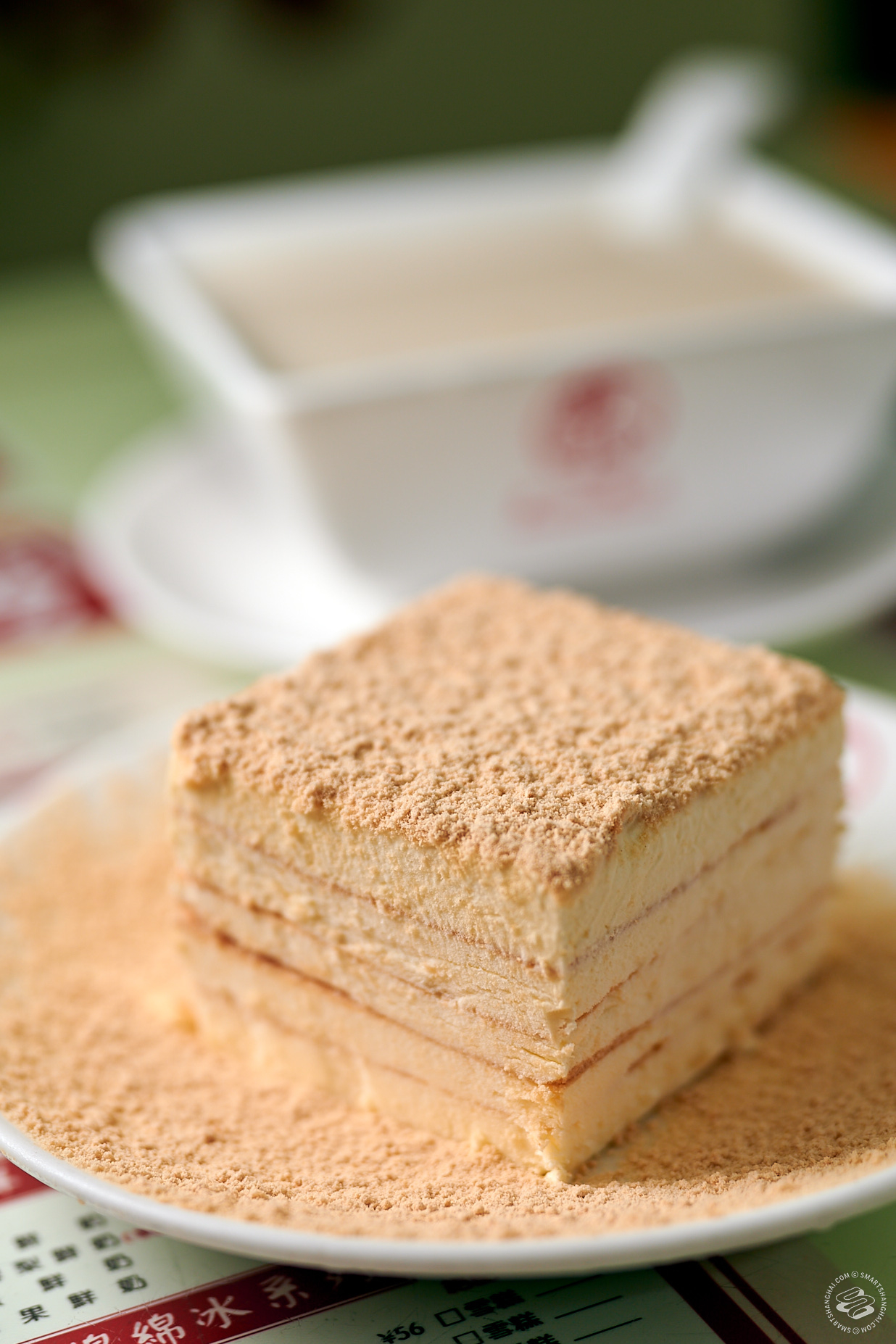 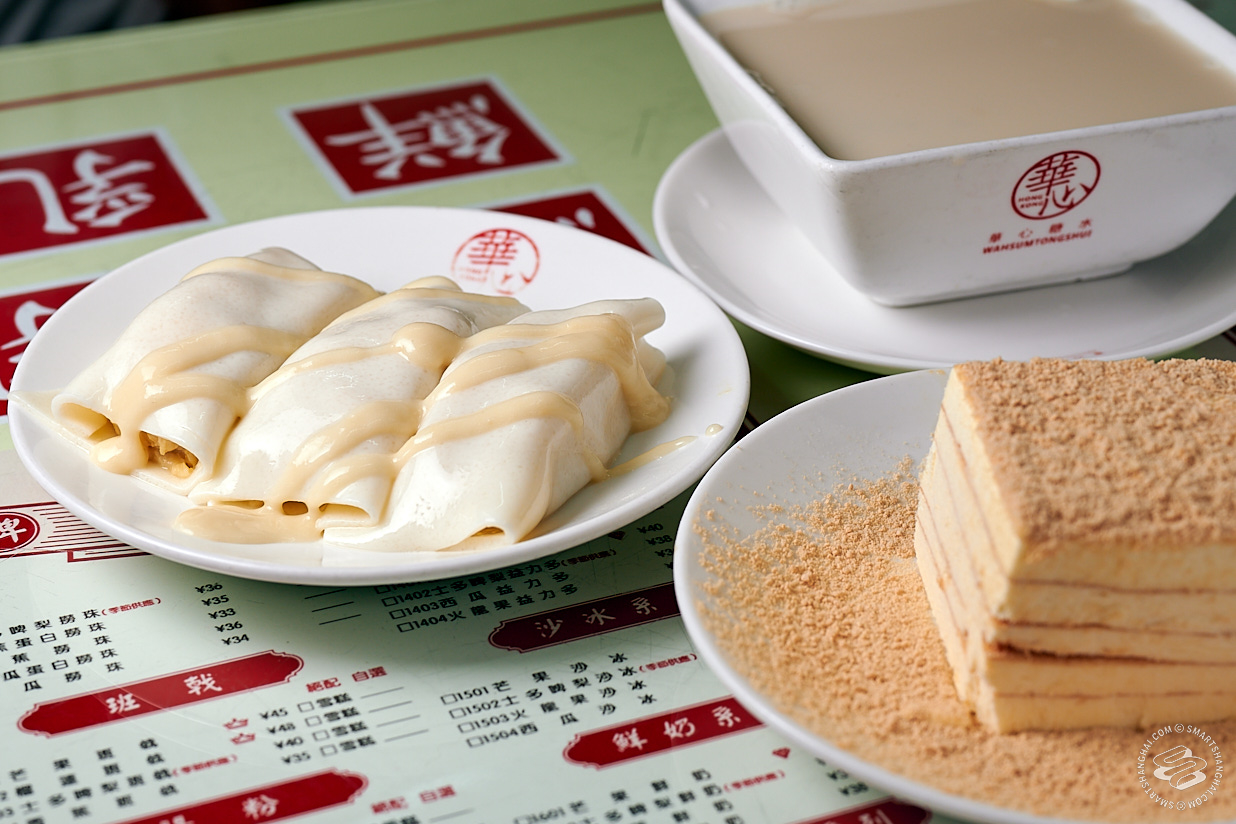 The soup didn't pass the chef test — the tofu skin was boiled until it had completely disappeared and the gingko nuts were either overcooked or broken to begin with when they should be whole. But the cheung fen was delicious, with a very tender skin and strong durian flavor, and the Horlick's frozen brick thing — actually a Hongkong-ified version of serradura, a Portugese dessert made popular in Macau — was unexpectedly (for someone who didn't grow up with this) delicious. The layers of frozen dairy sheared apart with the fork and the flavor was immediately nostalgic, like a malted milkshake that had been frozen solid. Don't need to be from HK to like this one. 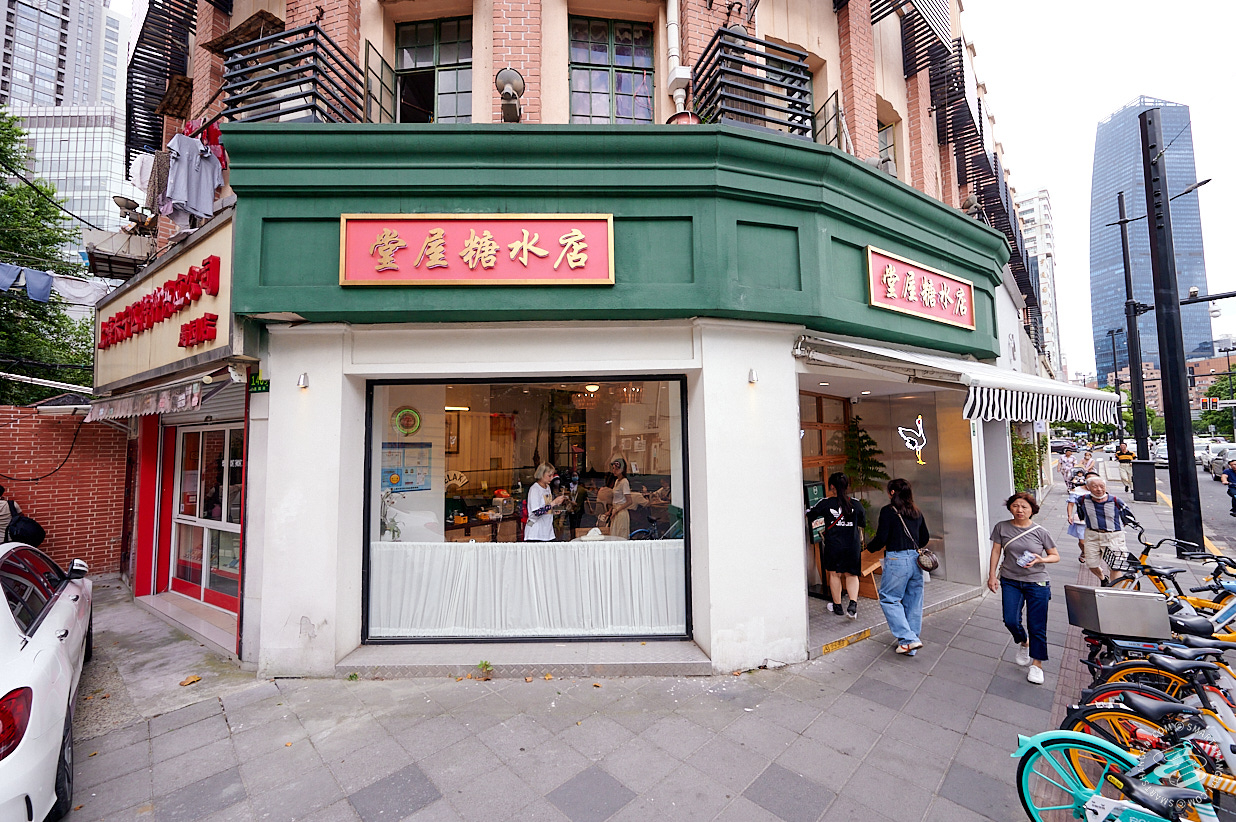 Tang Wu is the opposite of Wahsum in almost every way. They pay lip service to the classics but proudly modify them to suit their, and presumably their customers', tastes. The decor is way more sedate, almost tropical, with the retro tile, rattan chairs (near the window, at least) and ceiling fan. 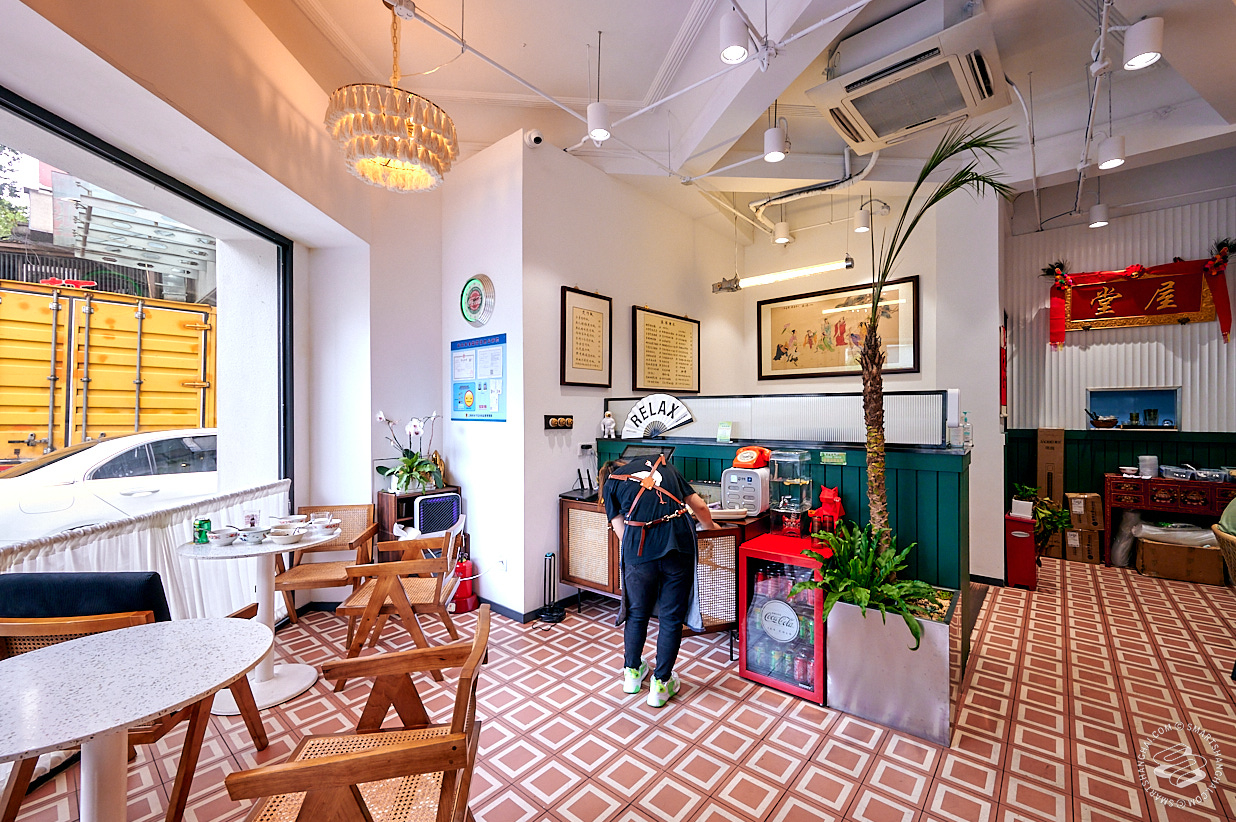 They opened in January 2019 in Pudong but recently moved to this prime corner spot on Yuyuan Lu. The Shanghainese owner likes mixing things up, taking ideas for Chinese desserts from different regions and fusing them together. You've got to be a chef or tongsui nerd to recognize it sometimes, but Tan pointed out the mish-mash to me in our favorite dessert (芋圆酒酿小风车冰粉): big slabs of a cool, clear jelly (bingfen from Sichuan); taro balls and peanuts (a Fujian or Taiwanese thing); and a big scoop of fermented rice (jiu niang, very Shanghainese). The result was delicious, not dissonant, and was the single best dessert on our tour — cooling, fresh, clean, funky, lightly alcoholic and acidic — and made heavy, over-sugared French cakes and pastries look clumsy and crude by comparison. 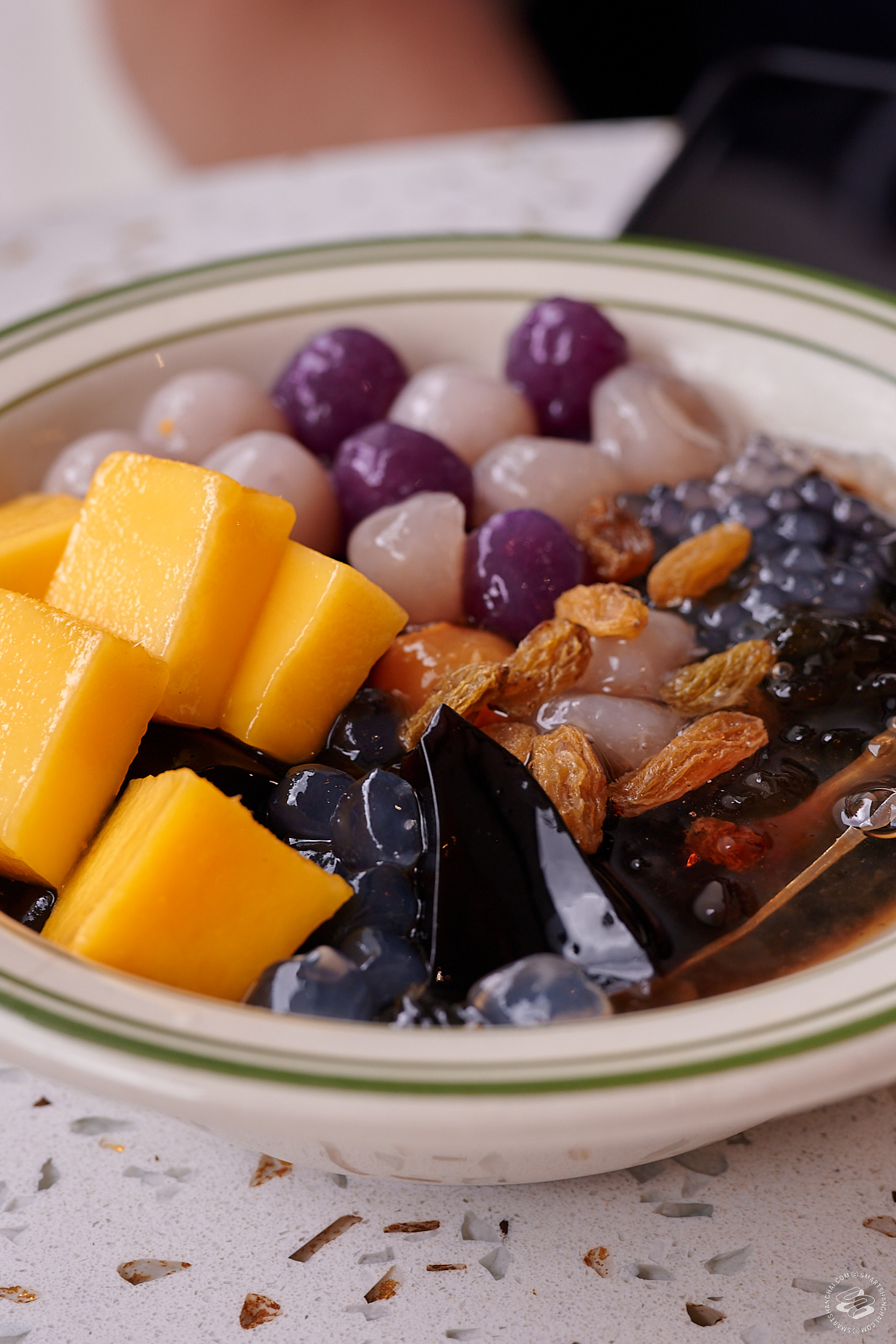 Also on the table were a cool soup made with taojiao, the sap of the peach tree, which doesn't have much peach flavor but, once rehydrated from its hard crystalline form, turns into a soft, cloudy texture thing; and a black herbal jelly with more taro, super sweet golden raisins, mango, tapioca pearls and almonds. Crunchy, soft, barely sweet except for the raisins. Great. 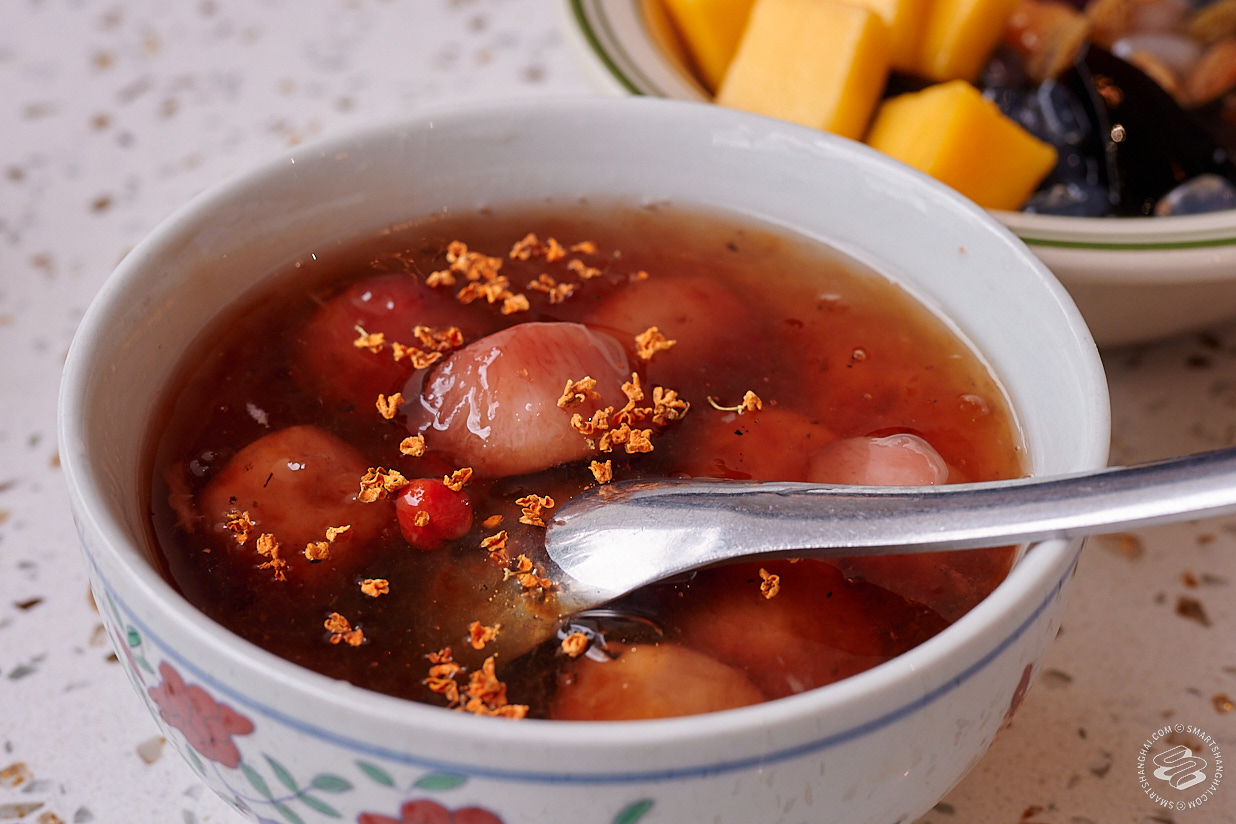 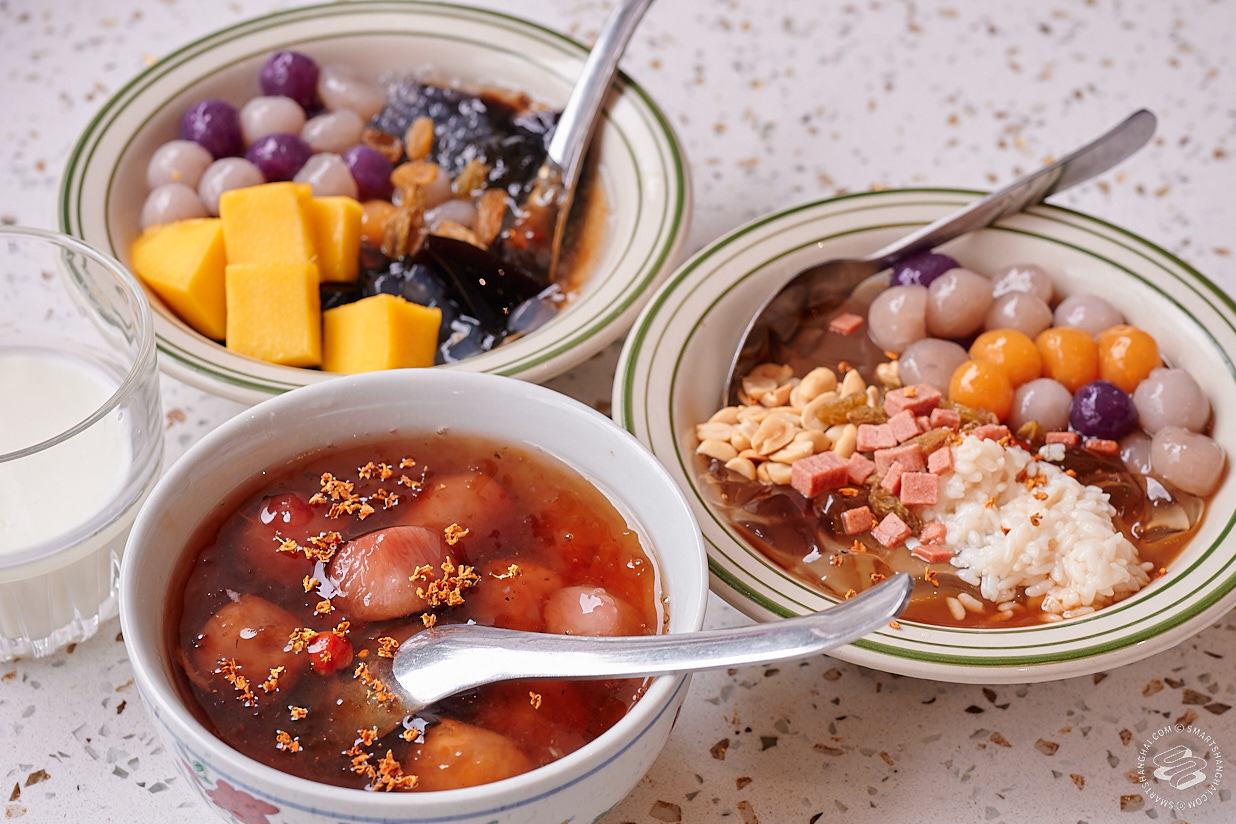 Tang Wu also does a brisk trade in Cantonese claypot rice, probably to smooth out the slow times of the day when people don't want dessert, but the rice is so cheap (starting from 22rmb) and the place is so cute that it's often packed. But! They are on Eleme.

No complaints about Tang Wu's desserts, which we agreed were the most interesting and delicious of the day, but I do wish everything had been colder. Lack of refrigeration space in a small kitchen, I guess. 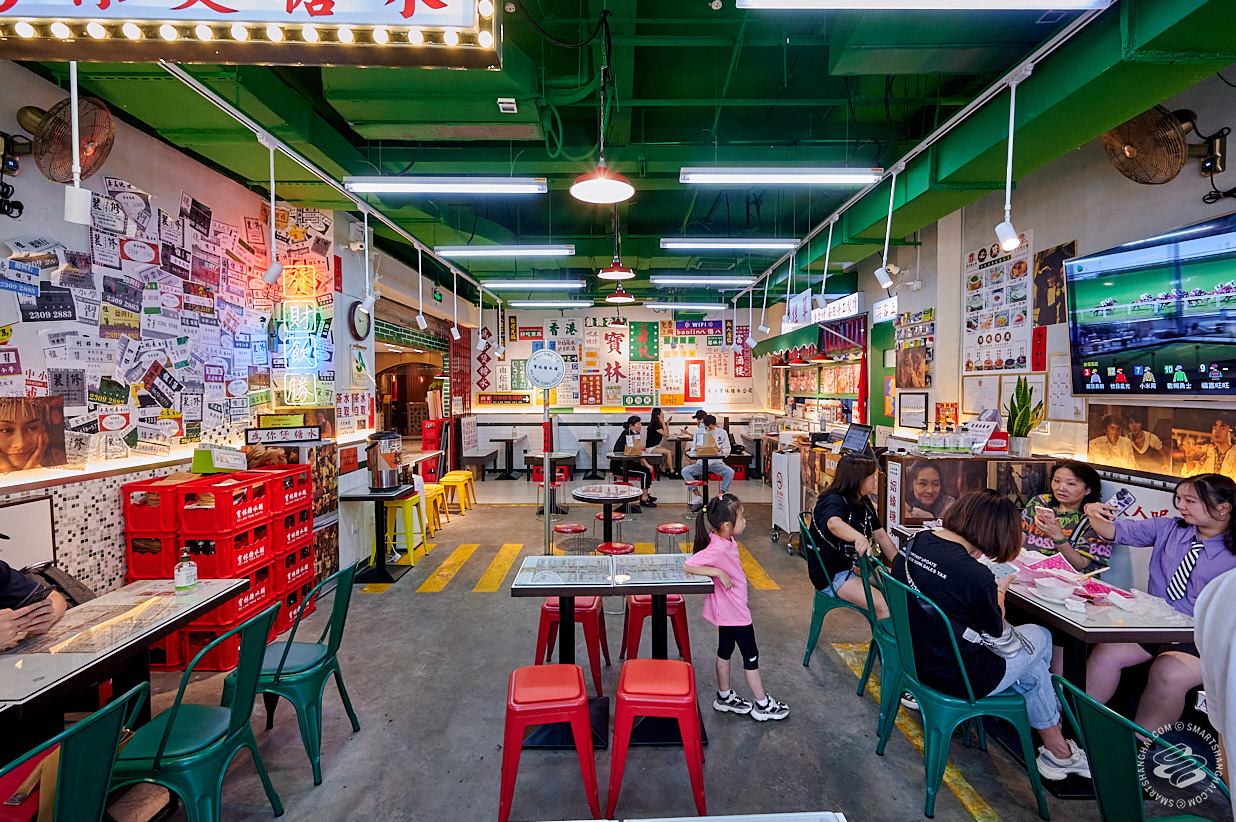 Our last stop brought us literally to the same block as the original Tang Pin in Xujiahui and a garish Hong Kong-style shop named Bao Lin. The brand first opened in May 2019 near Xintiandi and recently moved to this location, which is decked out in loud, noisy Hong Kong-street design. After the calm of Tang Wu, Bao Lin was a slap in the face. Wake up! Next stop, Mongkok! 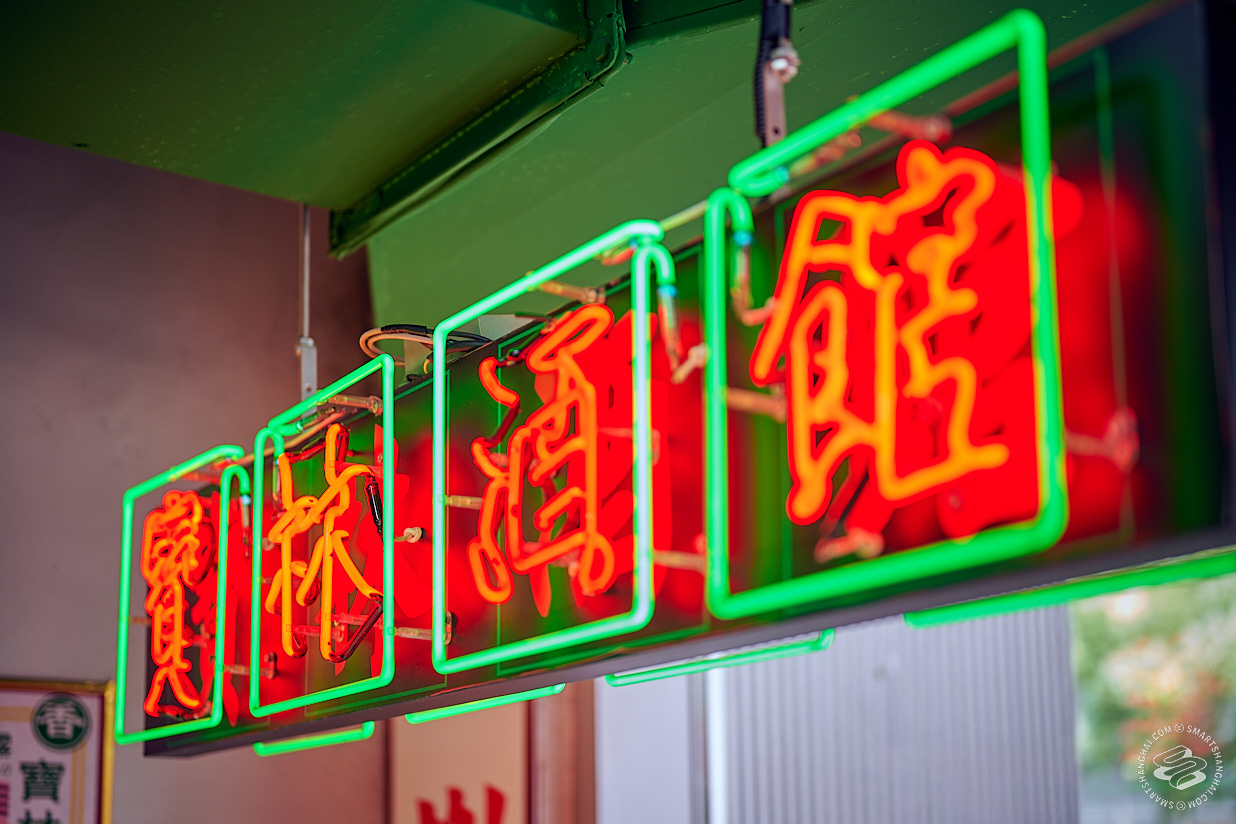 We tried three dishes — the classic yangzhi ganlu was sour and the almond soup too starchy — but we were mostly here for the shockingly green dessert, a puree of Iranian pistachios and lotus seeds, according to the owner. None of us, or the Cantonese friends I asked, had ever seen this one before; Bao Lin might be the first. Called "jade puree" in Chinese (寳林翡翠糊), what comes in the bowl looks more like saag paneer, the Indian spinach and cheese dish, or a thick thick pea soup. 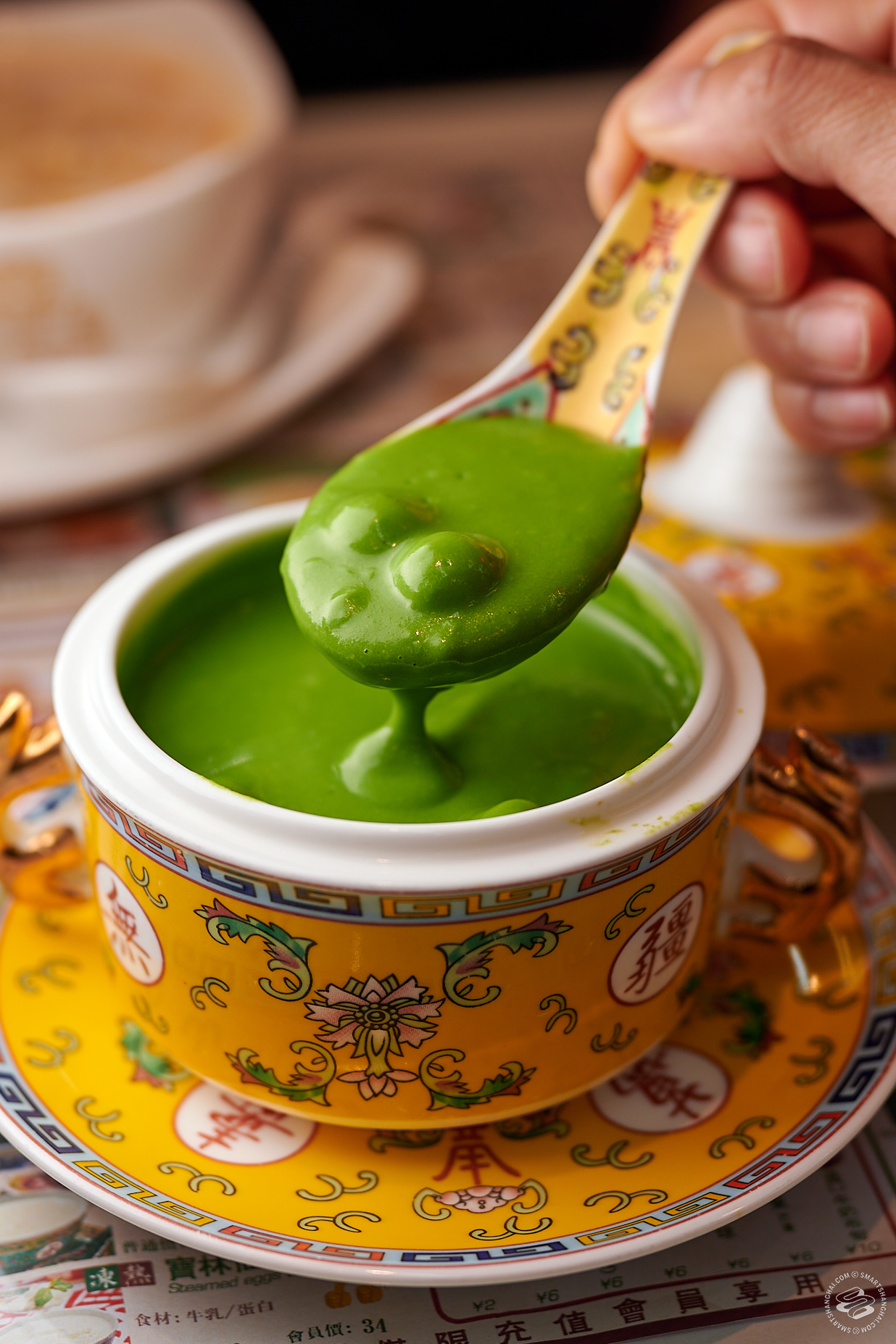 The first spoonful was good and fragrant, but the more we ate, the more we agreed they had been too conservative on the sugar. We asked for a little of their sugar syrup, which we blended in ourselves; it immediately mellowed out some of the pistachios' bitterness and improved the whole thing. Try it yourself and see.

Looking for more desserts? See all our listings for desserts right here.