Shanghai Grows China’s Best Peach. This is Its Fascinating History.

The end of the plum rain season is the prime time for Shanghai’s honey nectar peach. Its season is fleeting. Its flesh is delicate. Its symbolism — immortality, good luck — is deep-rooted in Chinese culture. If it’s not the world’s best peach (though there is a strong argument for it), then it is arguably the best in China. (Northerners prefer the sour yellow peach, which is best in August.) And it has a fascinating history. 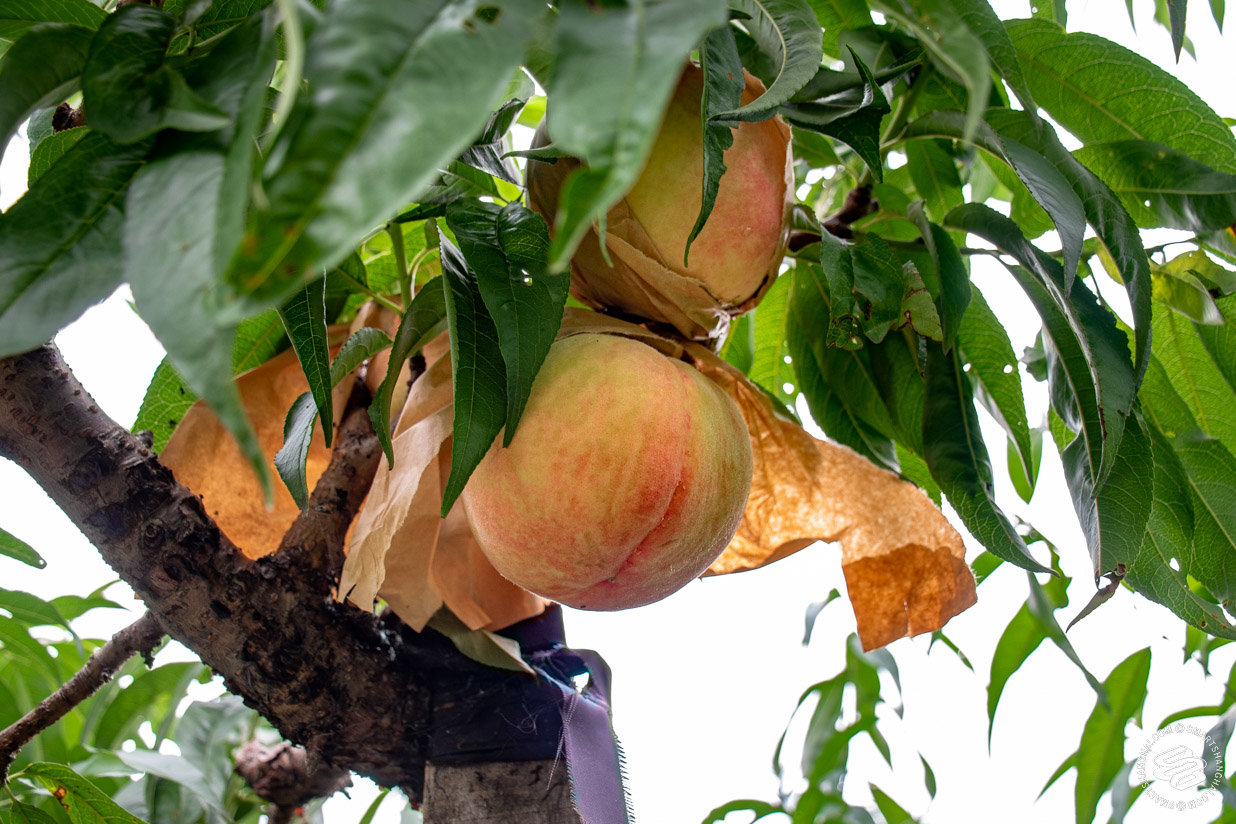 Shanghai’s shui mi tao (水蜜桃), which translates as the honey nectar peach, were first described in a Ming dynasty book recording the botany of the region (the 1621 Qunfangpu, 群芳谱) included the peaches from a government official’s garden. Gu Mingshi (顾名世) grew the peaches in his private Shanghai garden, the Dew Fragrance Garden (露香园) in what is today’s Huangpu district; there’s even a street, Luxiangyuan Lu, named after him though the garden is long gone. Today’s Luxiangyuan is, of course, dominated by the construction of a massive residential real estate project. Name: Aroma Garden. 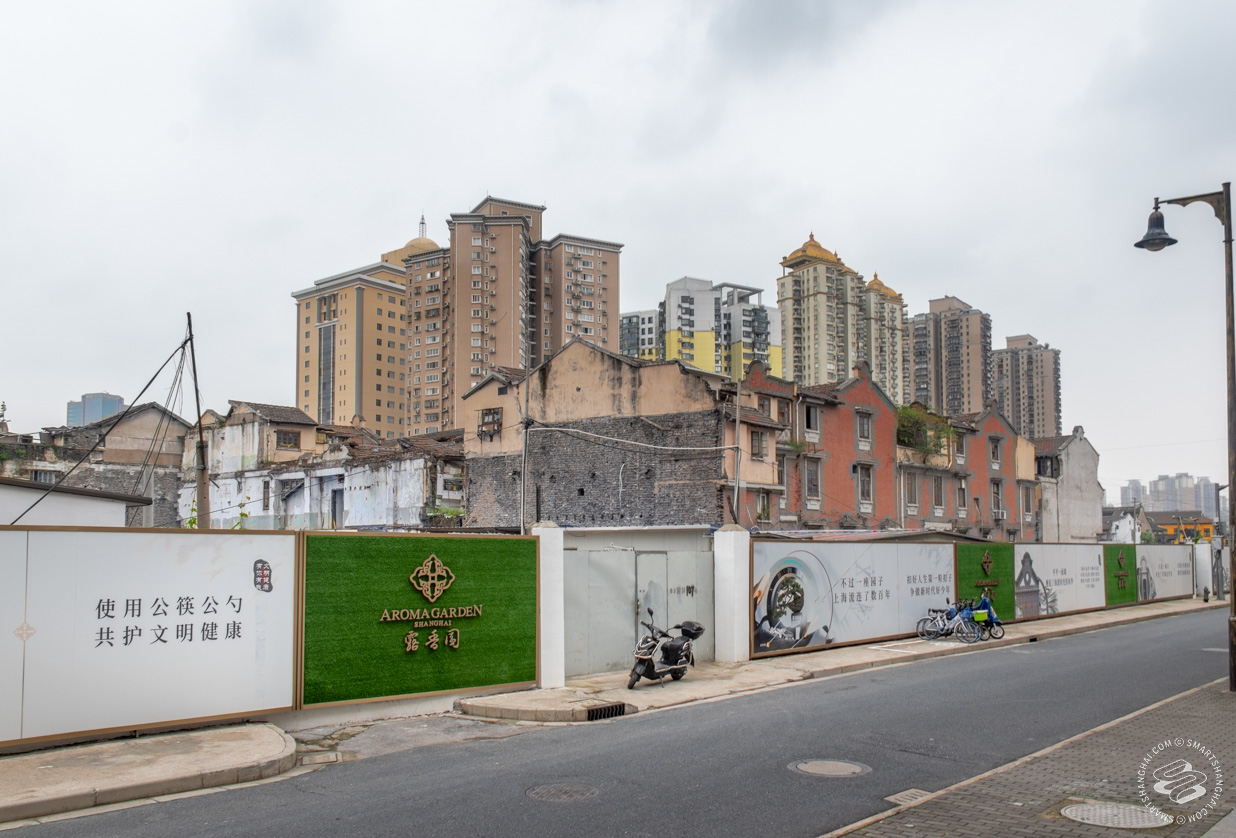 The peaches would outlast Gu’s family. After his death, and his eldest son’s death, the Dew Fragrance Garden fell into disrepair. The peaches lived on. Ancient horticulturist Wei Jietang (卫介堂) grew Gu’s peaches on his vegetable farm, which was around today’s Penglai Lu. The farm took its name, Huangni Qiang (黄泥墙), from the yellow mud wall that Wei built to protect the peach garden. Another private garden, Wu Yuan (吾园), also grew the peaches, near the intersection of today’s Wuyuan Jie (吾园街, not the Xuhui street) and Henan Nan Lu.

Fast forward to the 1800s, and already the urban growth of downtown began pushing agriculture, including peach orchards, to the outskirts: Longhua, the area near today’s Damuqiao Lu and the suburbs on the southern ends of the city. In 1847, Victorian botanist Robert Fortune (the guy who sent Chinese clippings to India, starting its tea industry), wrote this about the Shanghai peach.

“Amongst the more important of the acquisitions which I made in the vicinity of Shanghae [sic], I must not forget to mention a fine and large variety of peach, which comes into the markets there about the middle of August, and remains in perfection for about ten days. It is grown in the peach orchards, a few miles to the south of the city; and it is quite a usual thing to see peaches of this variety eleven inches in circumferences and twelve ounces in weight. This is, probably, what some writers call the Peking peach, about which such exaggerated stories have been told.”

Fortune liked them so much, he sent clippings back to Britain. I couldn’t find out if their descendants live on there, halfway around the world. Anyway, peach life continued on like normal for about a century, and then history intervened. The airfields around Longhua were not a good place to be in the China-Japan war, and in the frequent bombings of the area, much of the peach orchards were destroyed. The industry shifted to the city Wuxi, west of Shanghai on Lake Tai, and specifically its Yangshan area. 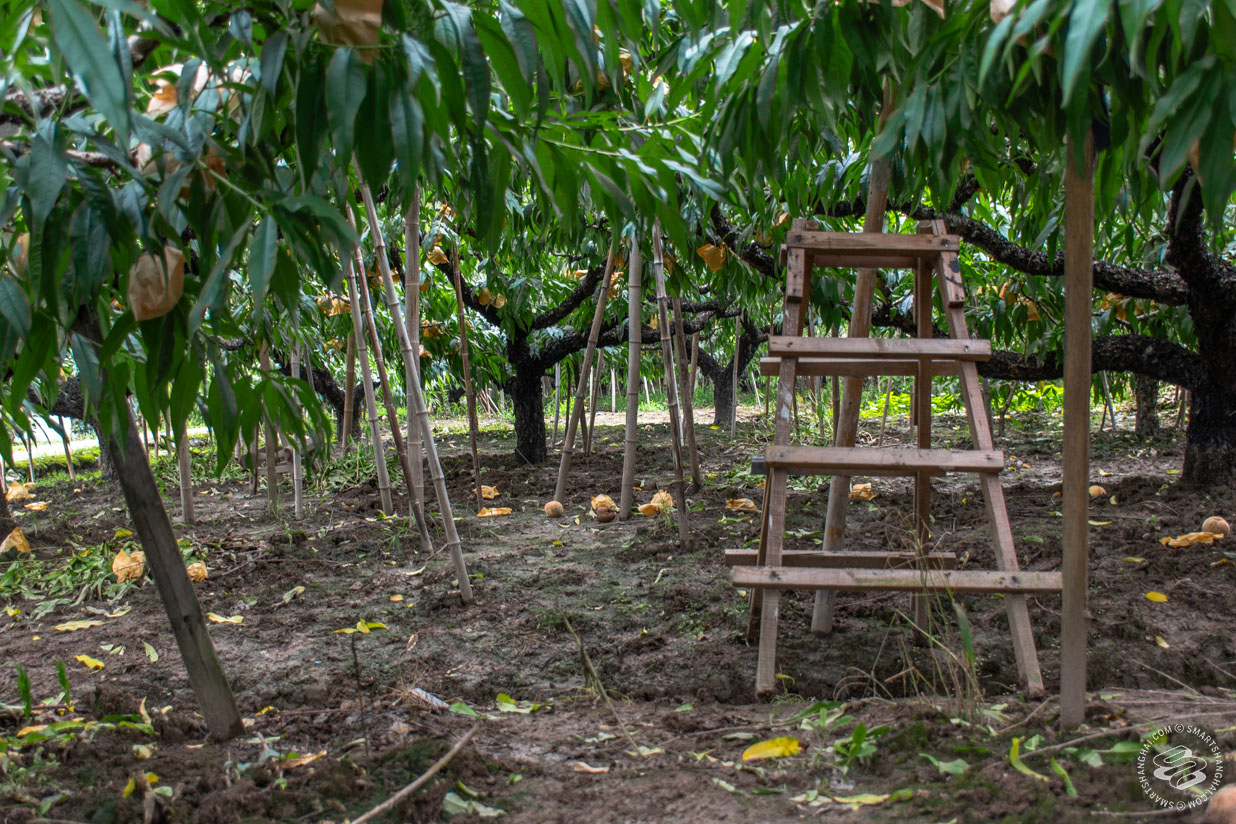 So I went peach picking in their memory. 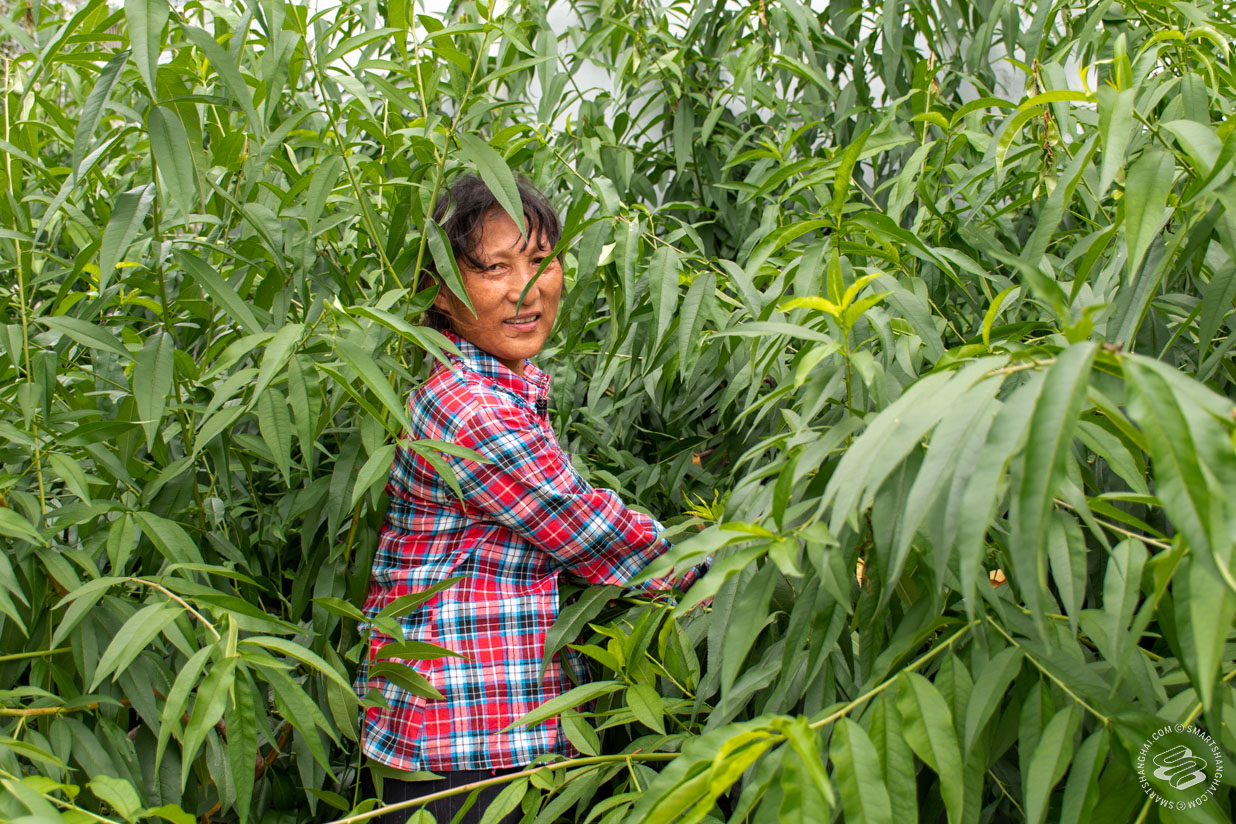 Tang Yinfang, in her late 50s, has been working in the peach orchards of Nanhui, an hour away from downtown Shanghai, since she was a teenager. Now she and her family run a small orchard open to the public called Little Mama, and a Taobao shop shipping honey nectar peaches across the country. 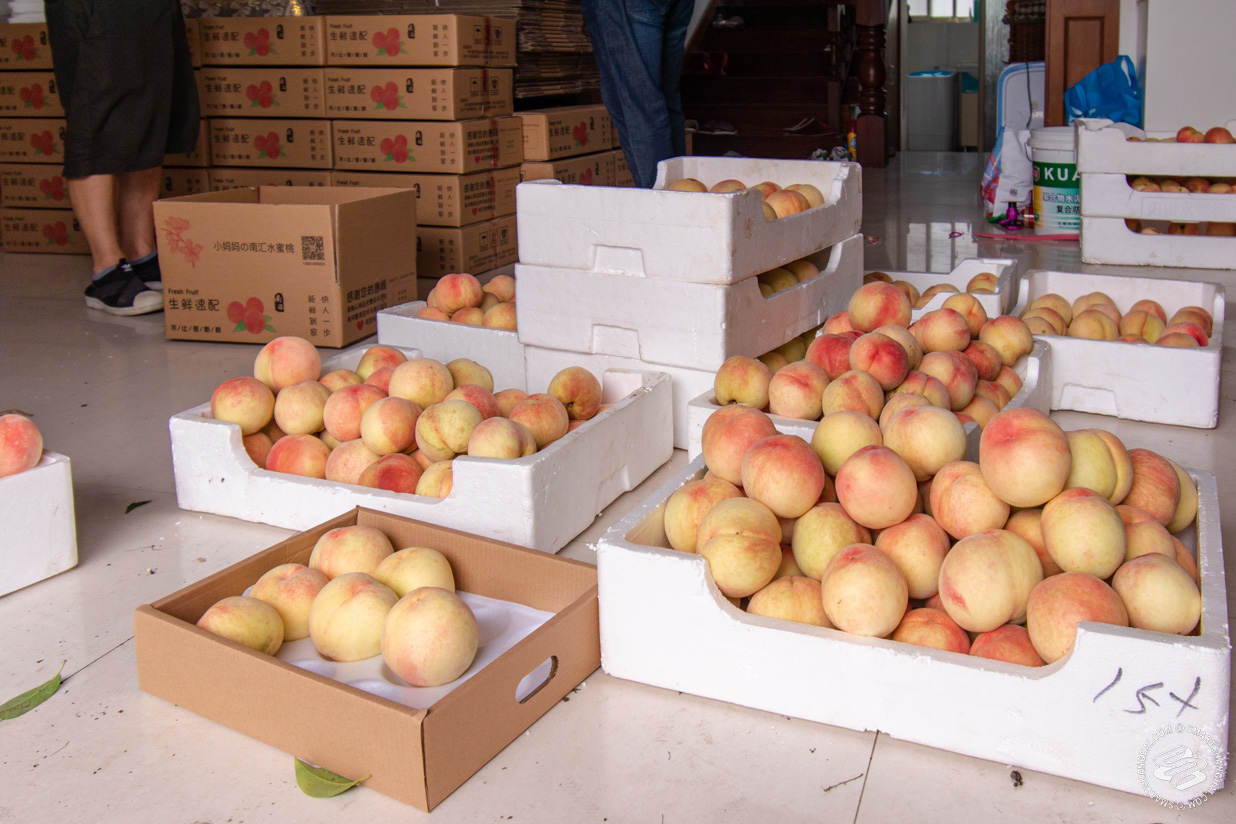 Like the Tang family, many villagers in Nanhui have depended on the peach for their livelihood since the area, in far-off Pudong, was developed for peach-growing in the 1960s. Today, more than 15 square kilometers (26,000 mu) of Nanhui are used for growing peaches, about the same size as Wuxi’s Yangshan area, which supposedly produces the “best peach on earth”.

We know, of course, that it was a Shanghai peach. 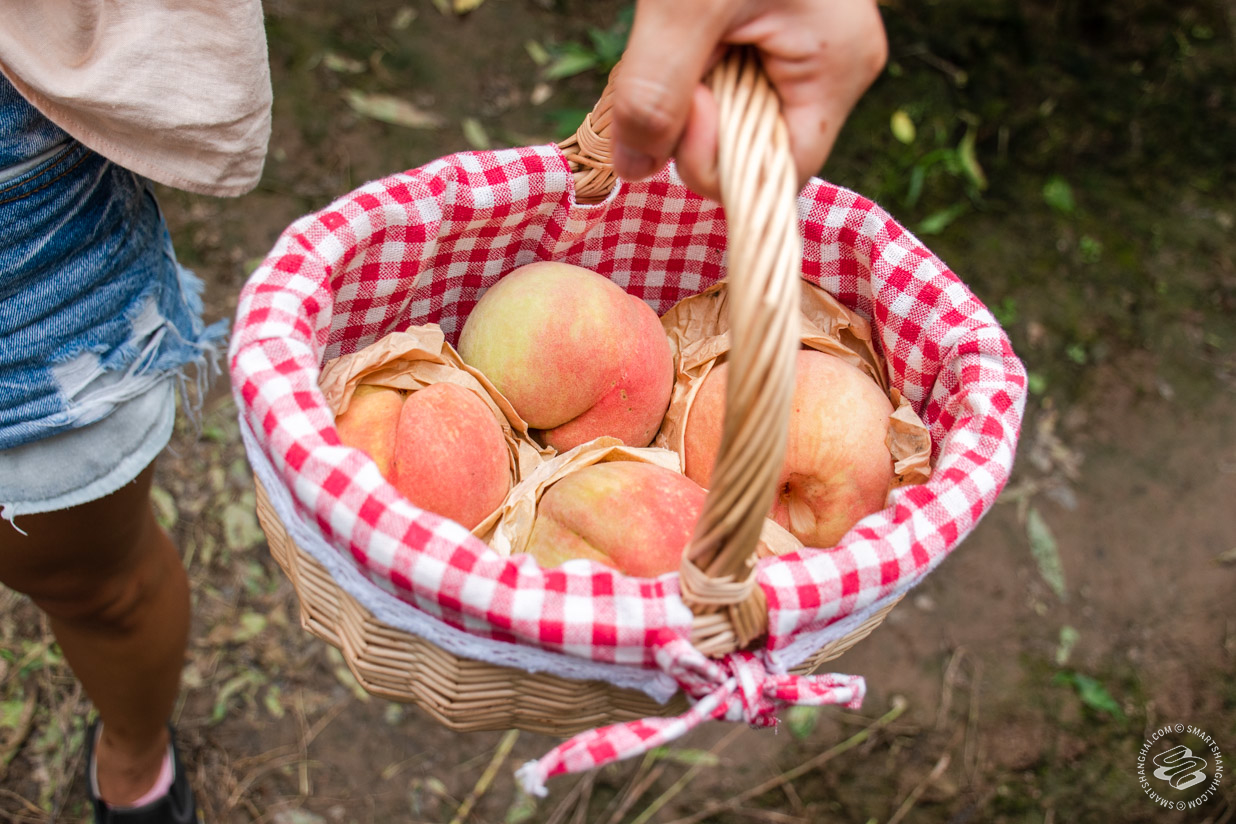 Tang and her family grow the New Phoenix Jade Dew varietal (新凤玉露), one of three types local to Nanhui. They ripen in mid to late July, ie., RIGHT NOW, and average 200 grams each. The skin of the ripe peaches peels off easily, and the juicy flesh is almost pasty from the high sugar content. The sweetness is soft, gentle, with just a little acidity. They are delicious. We ate two before even stepping out into the orchard.

When we did step out into the orchard, Tang’s son, Tang Kai, quickly dashed our fantasy of plucking ripe fruit off the branches and biting right into them. “Better not” he told us — they are too easy to bruise, and choosing the ripe ones isn’t as easy as it seems. For one, the peaches are all covered with paper bags to protect from insects, birds and strong wind. For two, you can’t squeeze them lest you damage the fruit. 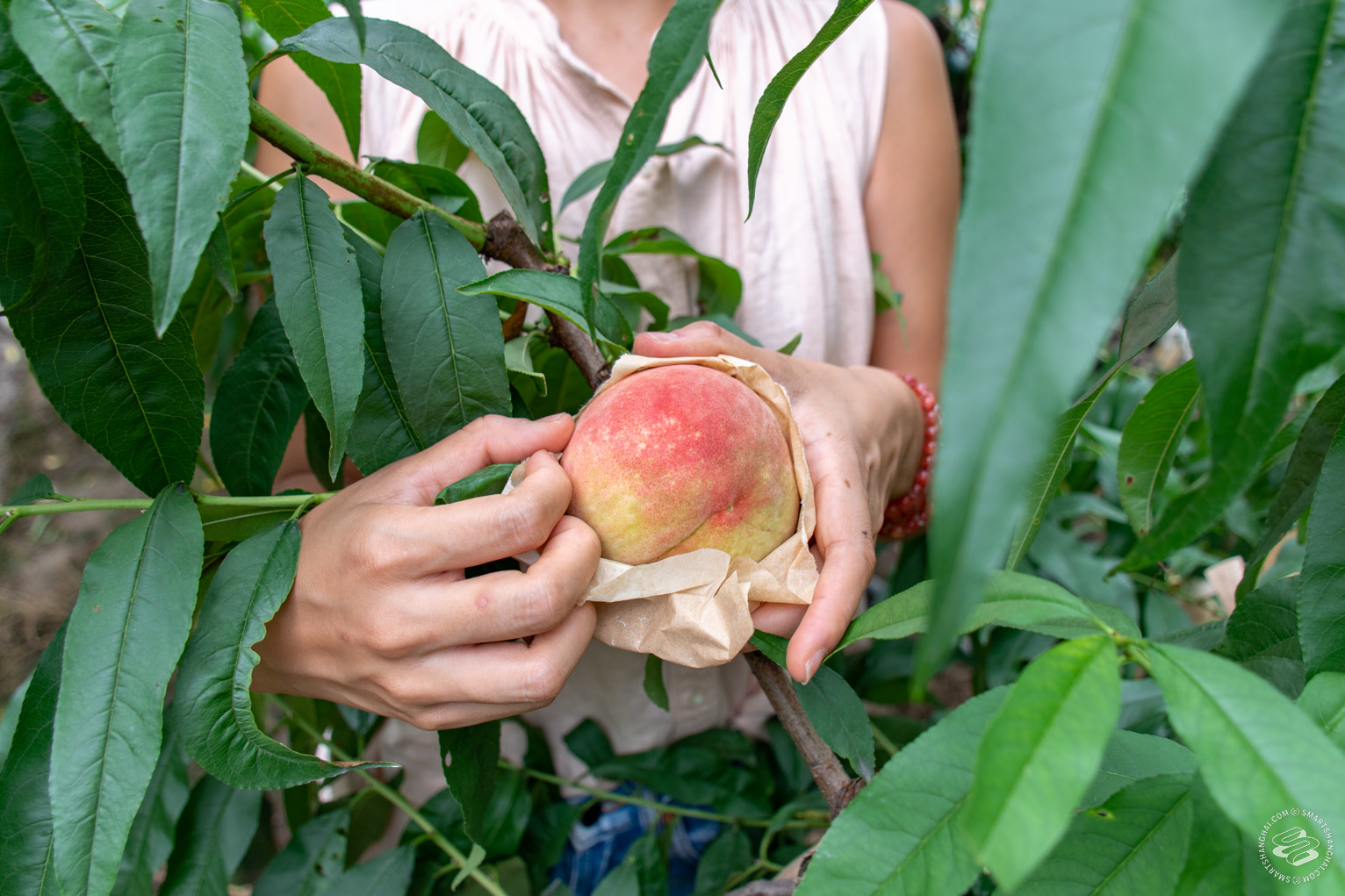 We picked three off the branch; Tang’s family chose the rest. Slightly deflated, we went back to the family’s house.

The grandfather and uncle live across the street and have set up a dining room for guests. We ate a quick bowl of rice cooked with long beans and pork. 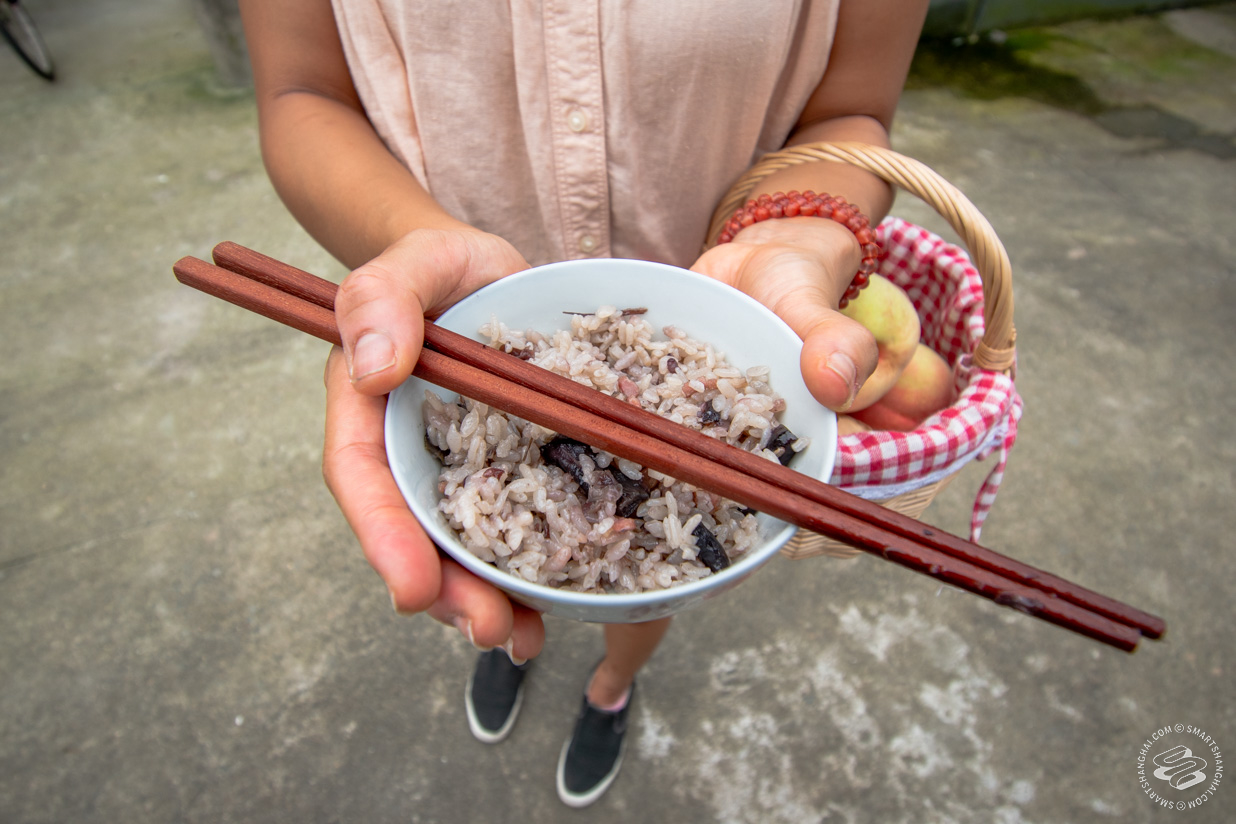 Wanting to make a half-day of it, we drove the five minutes to the Xinchang ancient town (新场古镇), a forgotten water town with well-preserved Qing dynasty architecture. The most exciting thing to happen here was director Ang Lee shooting a scene for Lust, Caution, some years ago but the only cameras around when we went were the grandmothers taking selfies. A thousand years ago, these were the salt fields of Huating. Today’s it’s a peaceful spot for residents and the occasional tourist. 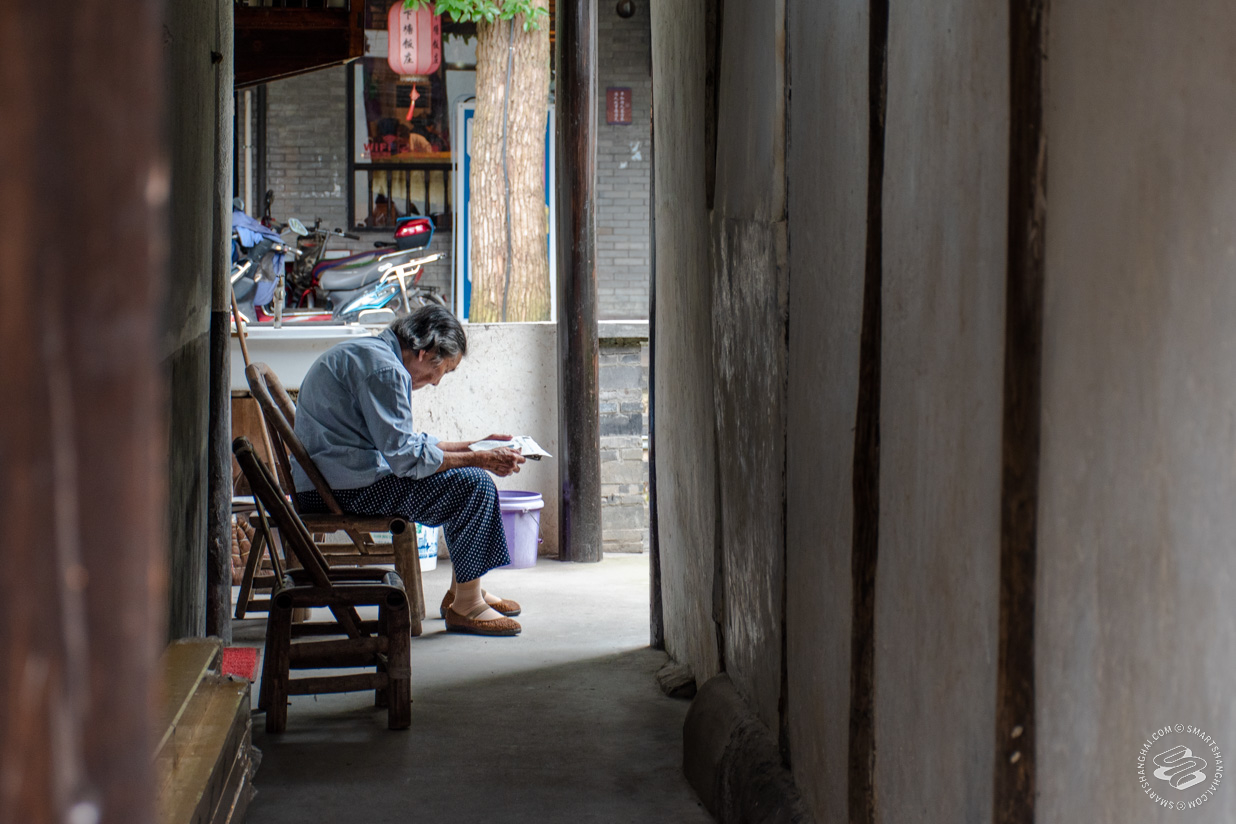 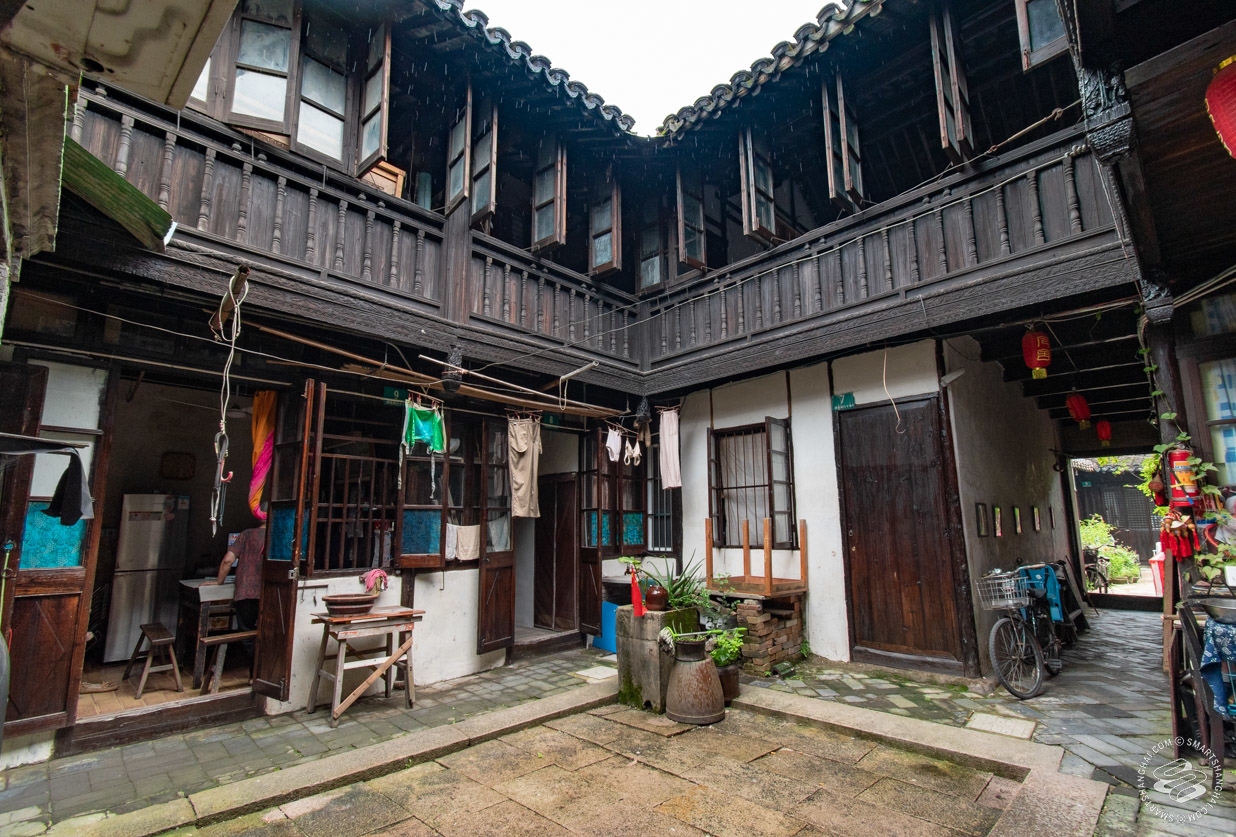 Back at the orchard, the honey nectar peaches hung heavily from the branches, squeezing in a last week of maturity. By next week, the prime season will be over, and then it will be time to get ready for the yellow peach harvest. They are good peaches, too. But they are no shui mi tao. 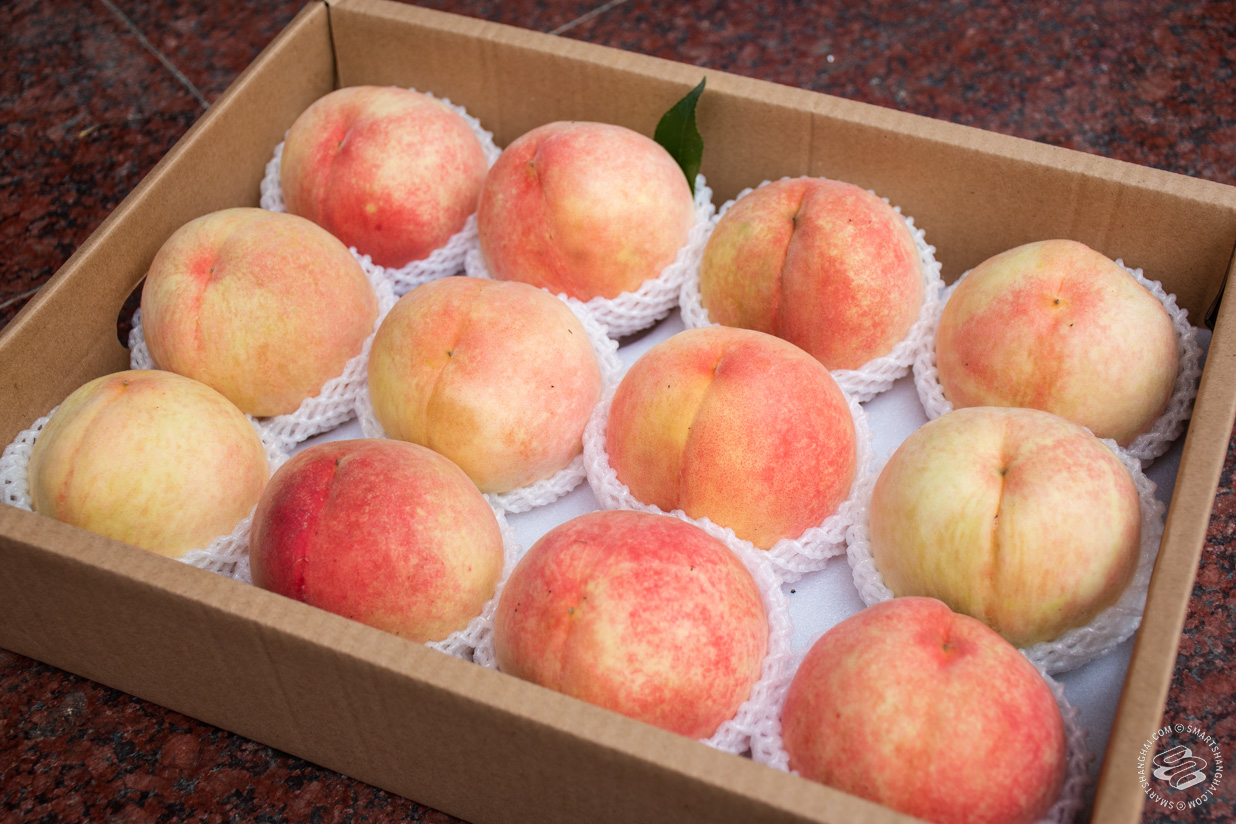 Little Mama Peach Orchard is just one of many peach-picking orchards in Nanhui, about an hour from downtown by car. Click here for more details on them. If you don't want to travel out to get them yourself, they also sell them on Taobao. Click here for that.