My name is Yang Peiming. I am the founder of the Propaganda Poster Art Centre, an official museum that displays the world's largest collection of China's Mao-era propaganda posters, from 1950 to the 1970s. They are all from my own private collection, which I have accumulated over many years. I probably have between 7,000 and 8,000 pieces now. 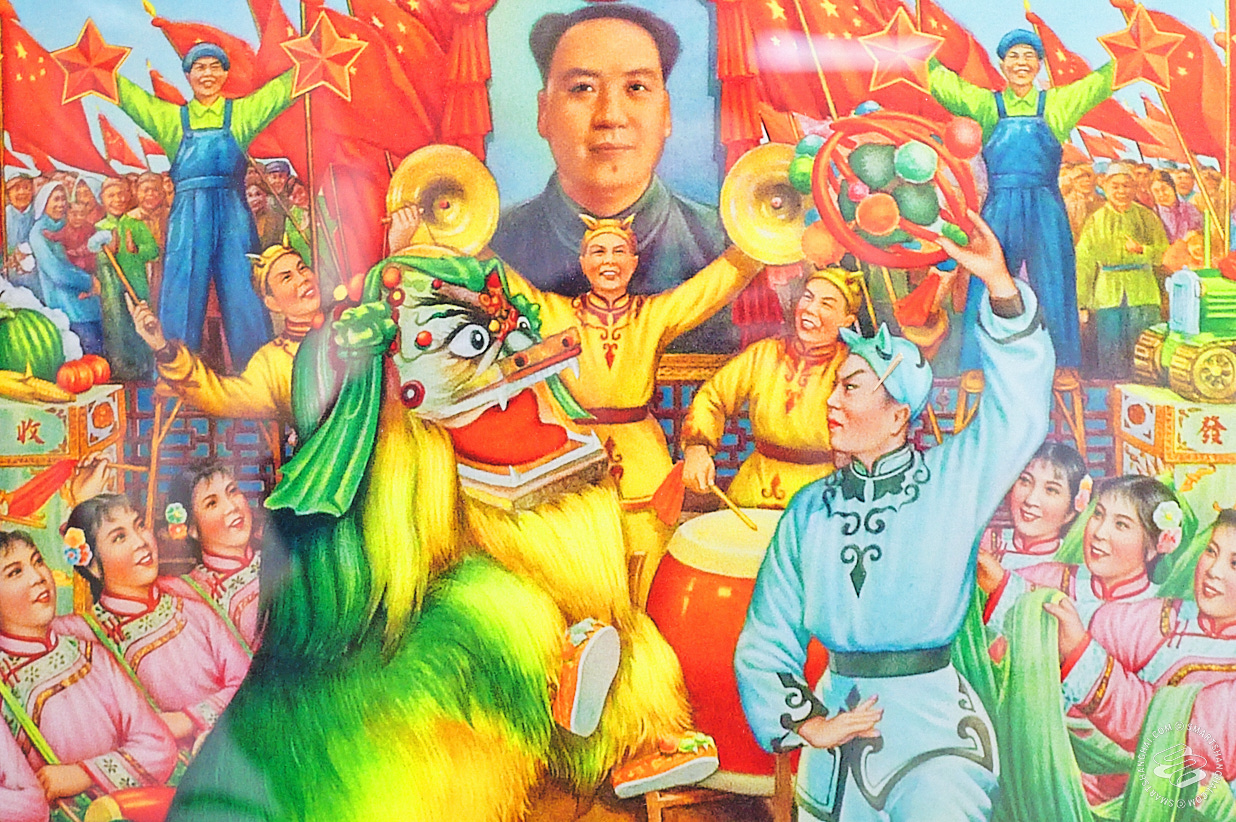 I have always enjoyed collecting things. In the case with these posters, I am also concerned with the need to preserve these important historical and cultural artifacts. From an art history perspective, people don't respect this kind of poster art. There aren't many other places to view artwork of this kind. The country's art historians don't promote it, either. They want to place focus on the classical calligraphy, the traditional landscape paintings. Now contemporary art also receives a lot of focus too, but that follows Western ideals so much. It's such a pity that these poster arts, from such a significant historical period, end up getting left out. 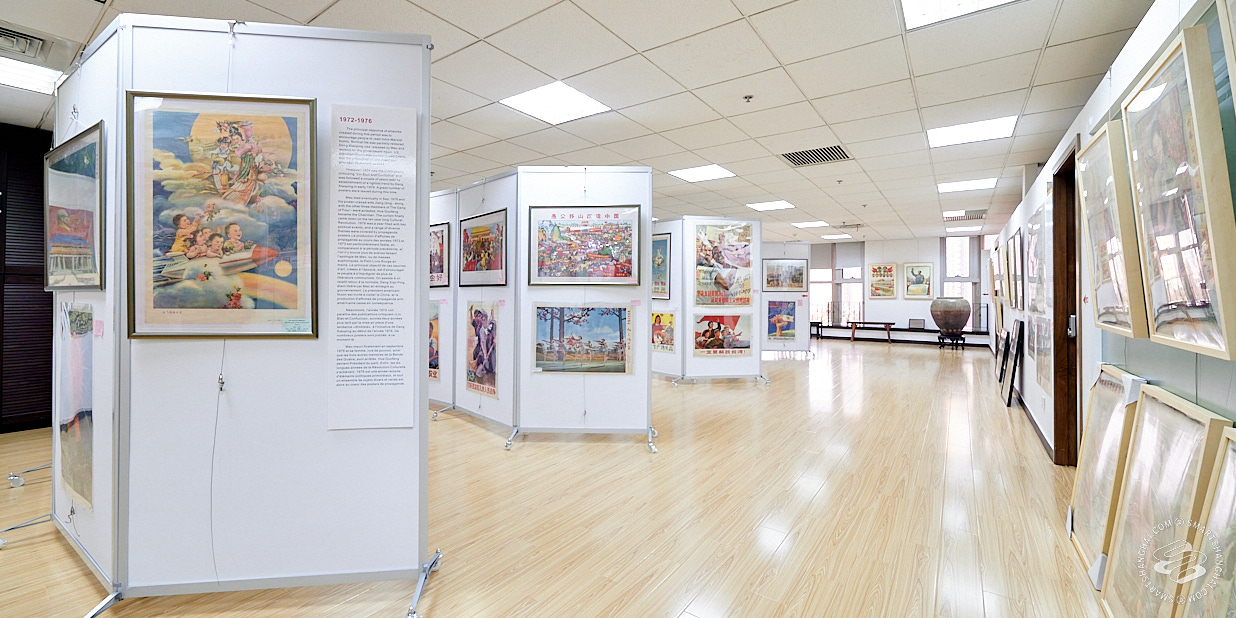 The political and art history elements aside, these posters represent the country's laobaixing [ordinary people / the common man] — it's the people's art. And the dazibao is like our graffiti art that we are able to preserve! [These "big character posters" were handwritten and plastered on walls to communicate ideas in a public forum.] It's not just about the political struggle. It's about the popular art itself. It was seen by so many millions upon millions of people. It was part of their daily life. 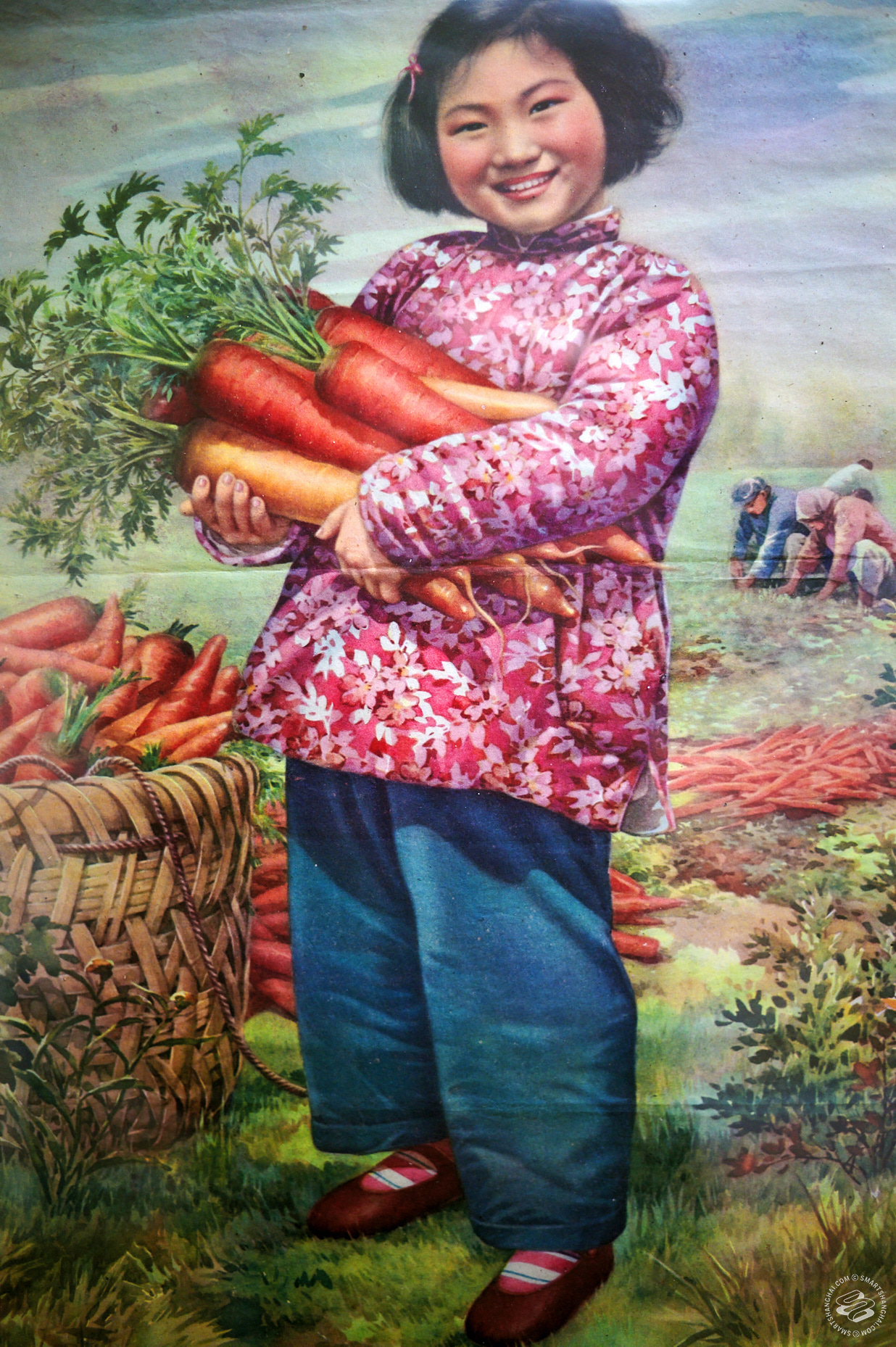 Some people today like to describe themselves as "native Shanghainese" — back then, this idea didn't exist. It was all just a bunch of small villages, with stones on the ground, and those of us who lived here came from all over the place. My great grandfather was from Hunan, and joined the Taiping Rebellion. He was in the navy, and he stopped in Suzhou. That's where my grandfather was born. Then the family moved to Shanghai for business, to find jobs, and I ended up being born here, in 1945.

We lived in the Old Town, which is the Laoximen area now. The first thing I liked collecting was stamps. My older brother went to middle school close to Fuxing Park, and back then this area had some Western influence, and some bourgeois hobbies like this existed there.

I would write letters overseas to exchange stamps with other collectors. That's how I originally started learning English. When I went to school at East China Normal University, I studied English. My father passed away early on, and no one guided me on what to do with my life. My mom said maybe being a teacher would be good, there's free meals. Then the social upheaval broke out.

During this time, I moved on from stamps and started collecting books. But after I graduated, I was assigned a job, far away from Shanghai, in Sichuan province. In the beginning, they wanted to send me to a village with no electricity. So I refused, because, no electricity? I want to read a book at night, after working 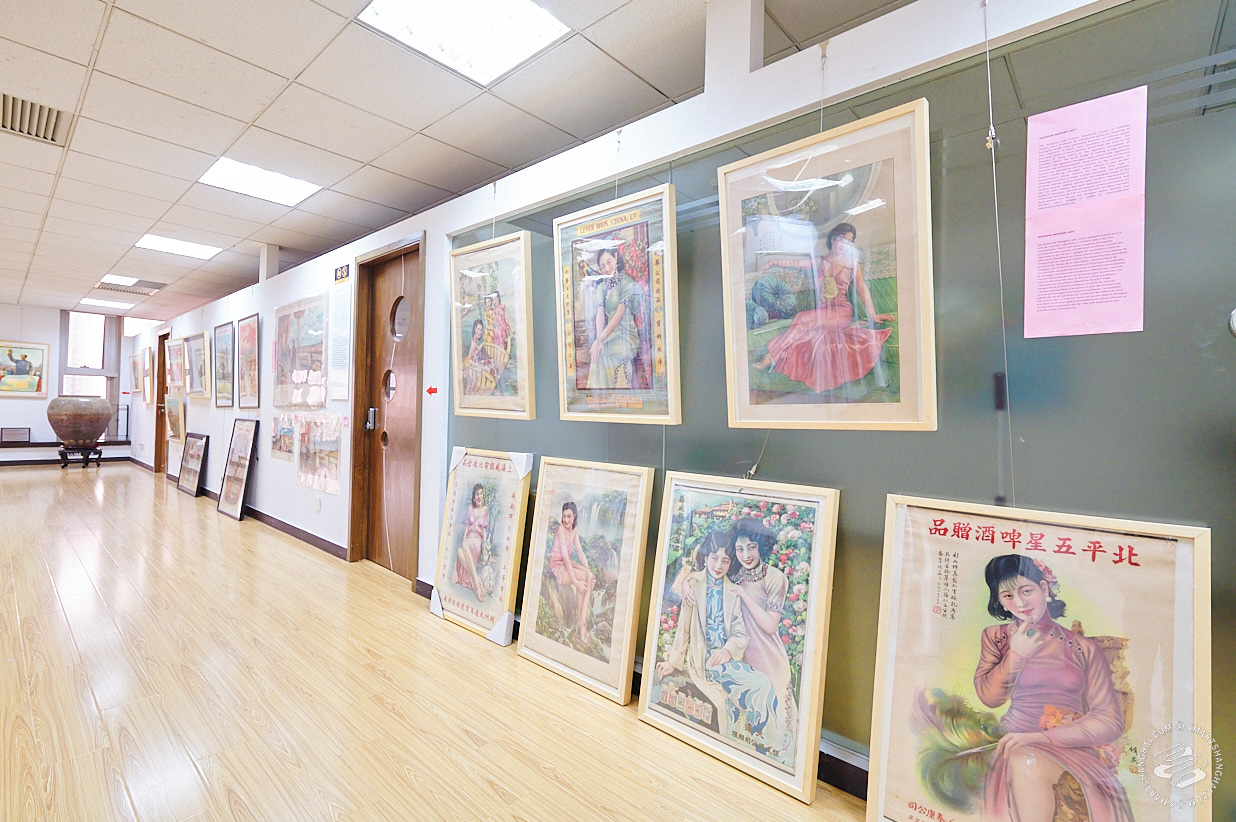 So I went to a nearby town, where eventually I found a job at a canning factory. They wanted me to check the boxes — the cans were meant for export, so they were in Russian and English. They didn't want to mix up the shipments in the notebooks. I worked in the packing workshop. At that time, it was much safer and happier to do such work because the teacher's work could be dangerous. Maybe you talk too much. 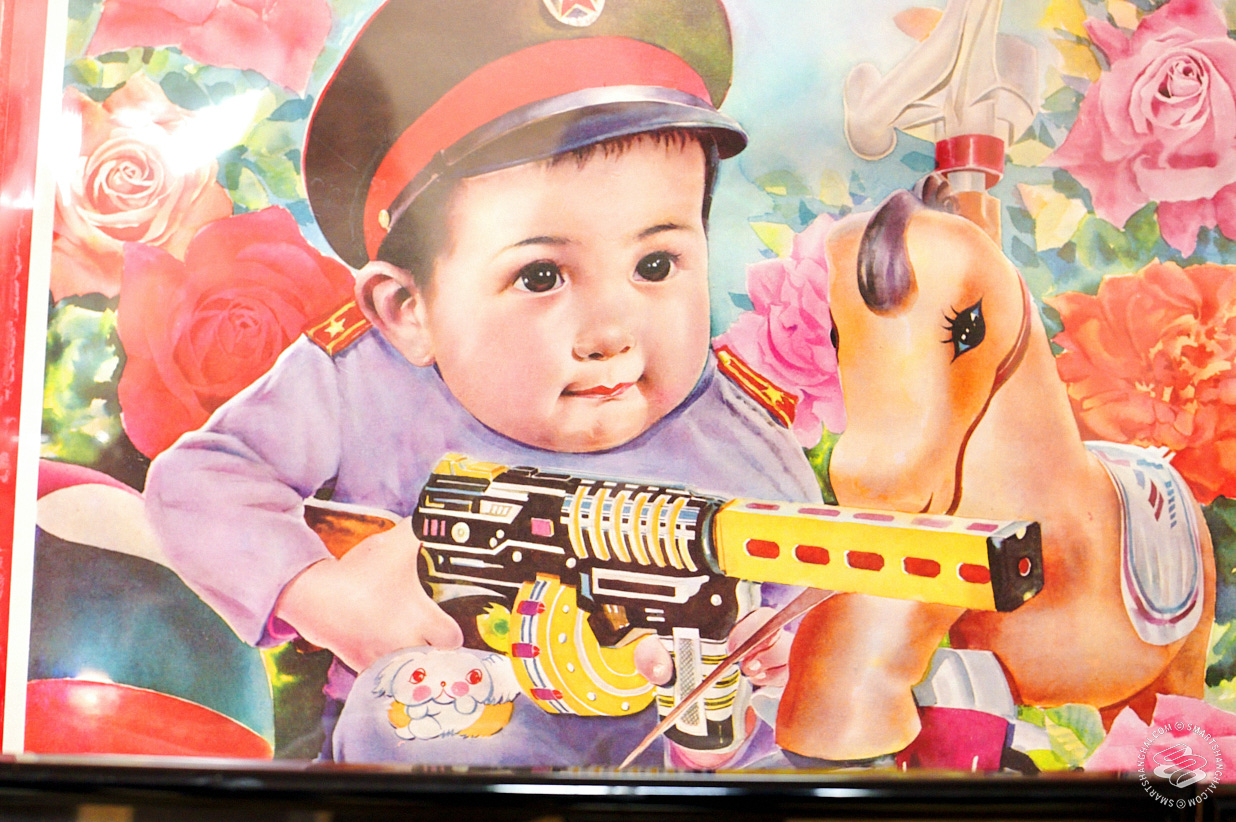 During those years, I often went around to used bookstores searching for books. But there were no books where I was living in Sichuan. Then I discovered a junk shop one day. It was filled with books left over from closed down schools. But the books were so expensive. I asked them, do you want cans? They did, so we made a deal: cans for books.

Back then, it was almost impossible to change your job. I was determined. I went to Wuxi and I knocked on the door of this travel agency, and I asked for a job. They told me no, no, you cannot change the job by yourself. You need your zhuzi [boss/master, often used sarcastically], your organization, to fix all the documents. It wasn't easy then — the only movement was from big city to small city, from East to West. Not the other direction. But I was lucky. I managed to convince the director at a travel agency to hire me. 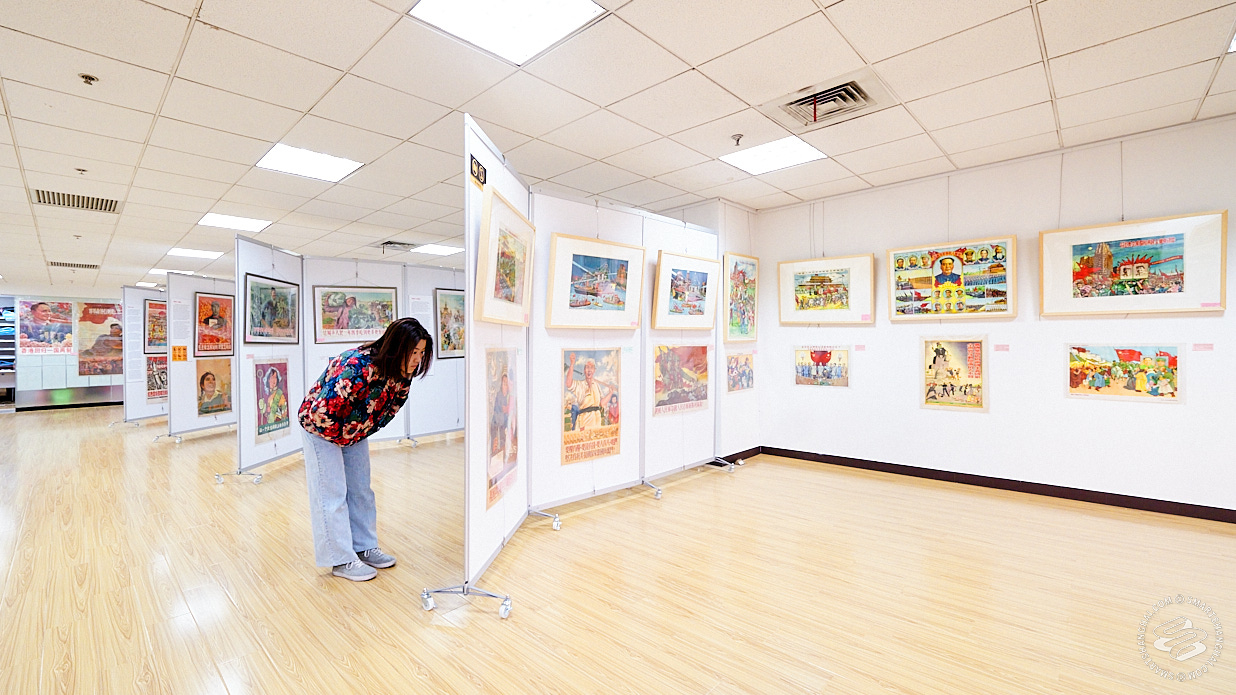 My job was mostly to take people to antique shops, to explain the culture and history of these items. I took Elizabeth Taylor around Wuxi to see antiques. Nobody in China knew who she was! I told them she was a big movie star from America.

I learned a lot about Chinese antiques during this time. Once I was in a secondhand shop and I saw a normal-looking pocket watch. I looked closely — it was from the Qianlong period! The price was 35rmb. And there was an accordion on the wall, also Qianlong period. Wow, how I wanted these. But my monthly salary then was 42rmb. I couldn't afford them. How would I eat? Now when I think about it, I think, ah! Today that watch would be worth two million rmb! Probably more.

Before 1966, the best place for collecting antiques, for collecting anything, was here in Shanghai. Afterwards all those items got taken and spread all over the place, all around the country, even overseas. But Shanghai people are very clever. They always find a way to do business.

I returned to Shanghai in 1971, and I was still looking for more English books. We had these secret book exchanges on the street. One was on Fuzhou Lu, which is still known as a book street. I remember we would be looking at books or antiques, and you'd hear "the chengguan are here!" and we'd all run off. The antique street moved so many times.

I had a copy of War and Peace, just the first volume, that I got from the junk shop in Sichuan. I wanted to trade it for a new English text. Someone had one — it was the Bible. I thought, "It's still a classic. And there's a lot of historical importance in the text," so I made the exchange. And I never could have imagined it, but this 1923 Oxford print edition, in the front, there were the brush strokes of a name, Qian Zhongshu. The number one, most famous Chinese scholar. It's priceless. 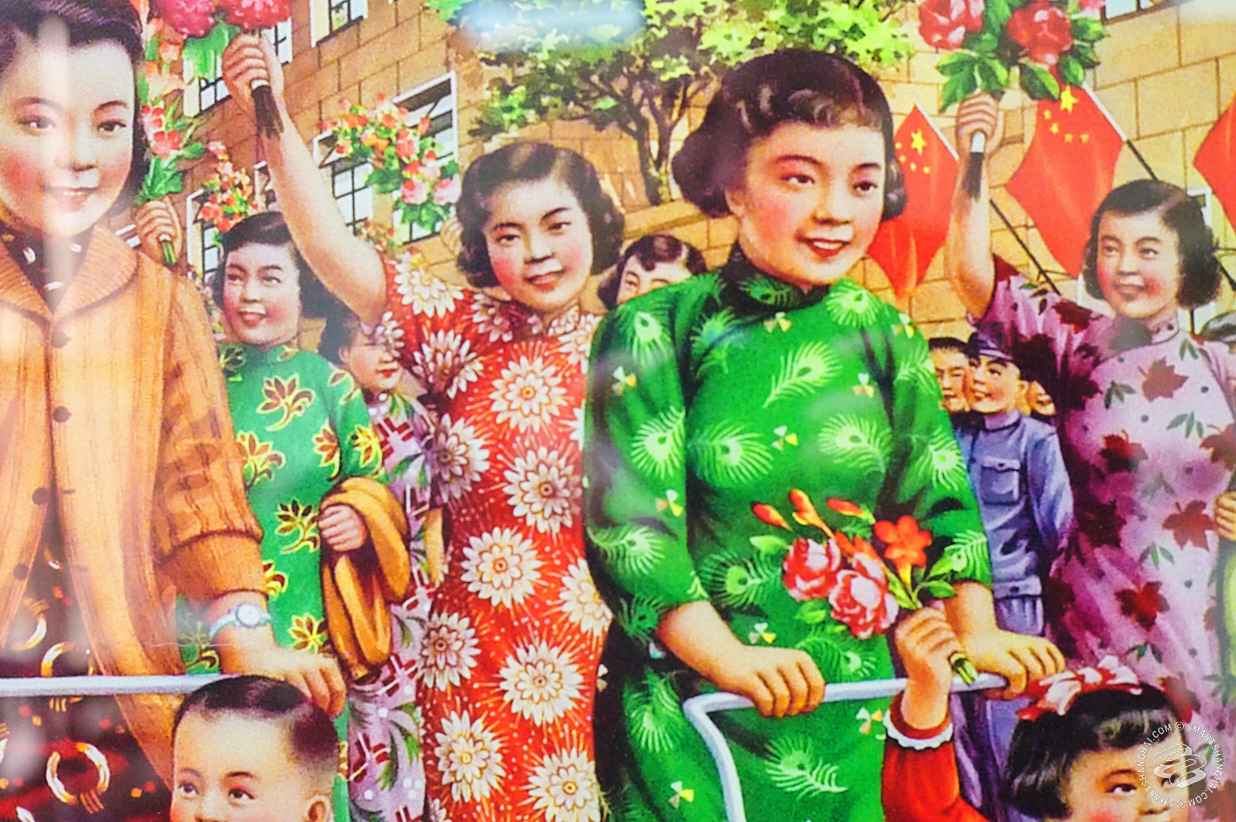 Most people my age are still talking about this time in our history. Of course we do, we like to talk about our young lives. It's still a very active topic. Daily life is not taboo. If you work for the government in an official capacity, or if you are casting criticisms on the topic, or on Chairman Mao, then yes, it's trickier. But in running my museum, I never had any complaints from anybody. My point is the art, my interest is the art, not to make criticism. Nobody ever came to check me, or ask me to change the pictures.

I had to move the Propaganda Poster Art Center to this office building late last year. Before, we were in the basement of an apartment on Huashan Lu. There was one Sunday when we had 200 visitors in one day. It made the neighbors unhappy. Also, the facility itself wasn't very suitable anymore, so here we are. I have over 300 pieces on display at this new place. I opened up an additional small room of posters here. 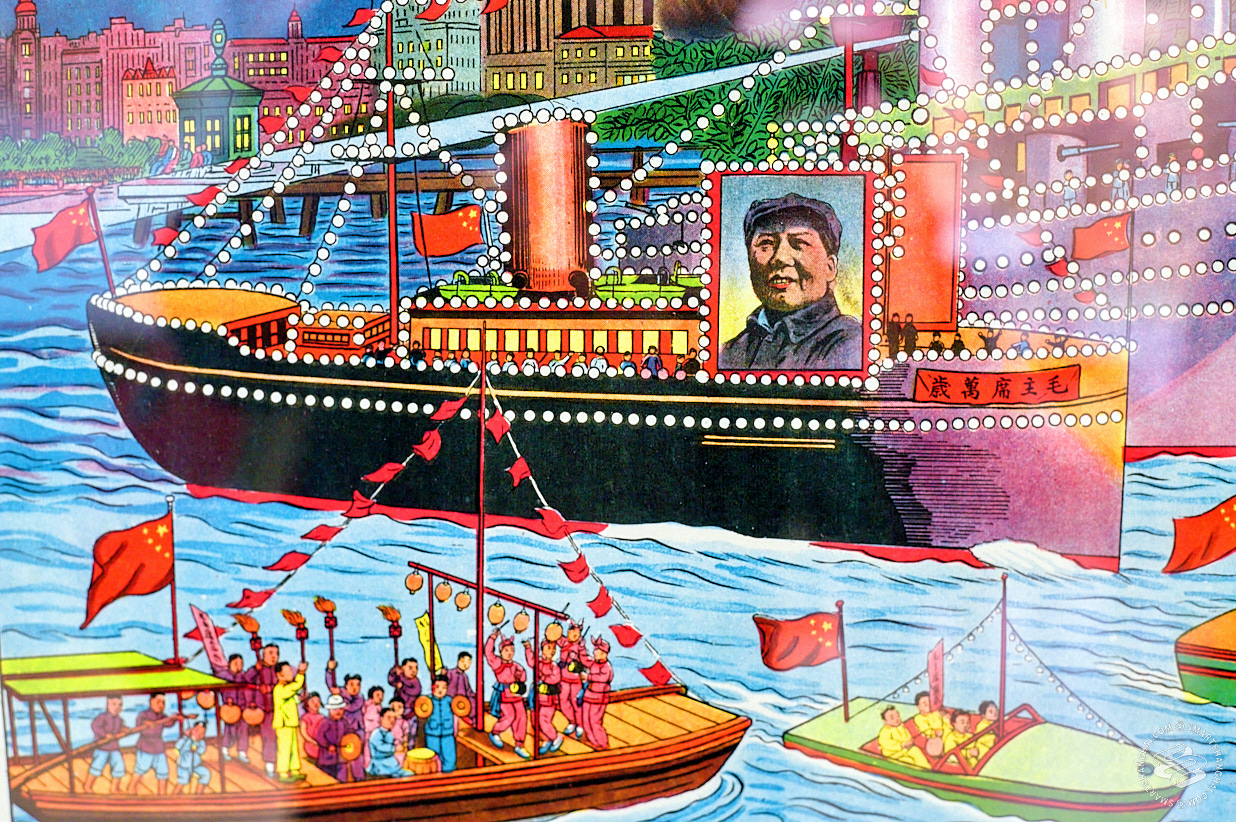 Before this year, we had somewhere between 20,000 to 30,000 visitors each year. Most of them are foreign visitors. I assume in the very beginning it was word-of-mouth among foreign visitors that got us started. This word "propaganda," it really has its advantages and disadvantages. It's hard to translate from the Chinese "xuan chuan". Propaganda is not a pretty word. When people hear it they think of being brainwashed. But, the things you see on TV, on Douyin, is this not brainwashing? On the other hand, hearing the word can also make you feel intrigued. 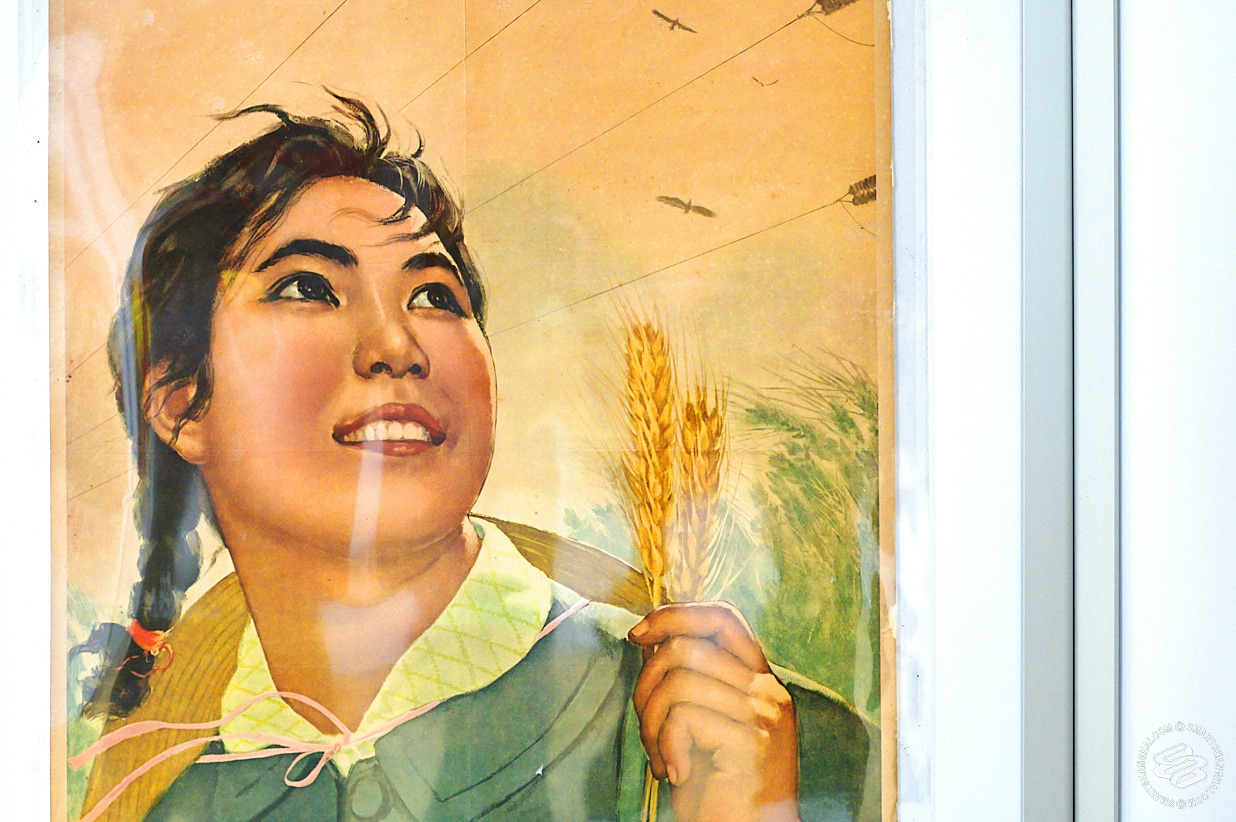 Chinese tend to have less interest, for several reasons, I think. Some young people who are interested in history and artwork come. But this kind of taste can take a couple of generations to cultivate. So many people now, they are more interested in traveling, in eating at nice restaurants. If we're talking about the older generations, well, they're more simple. You can't blame them. 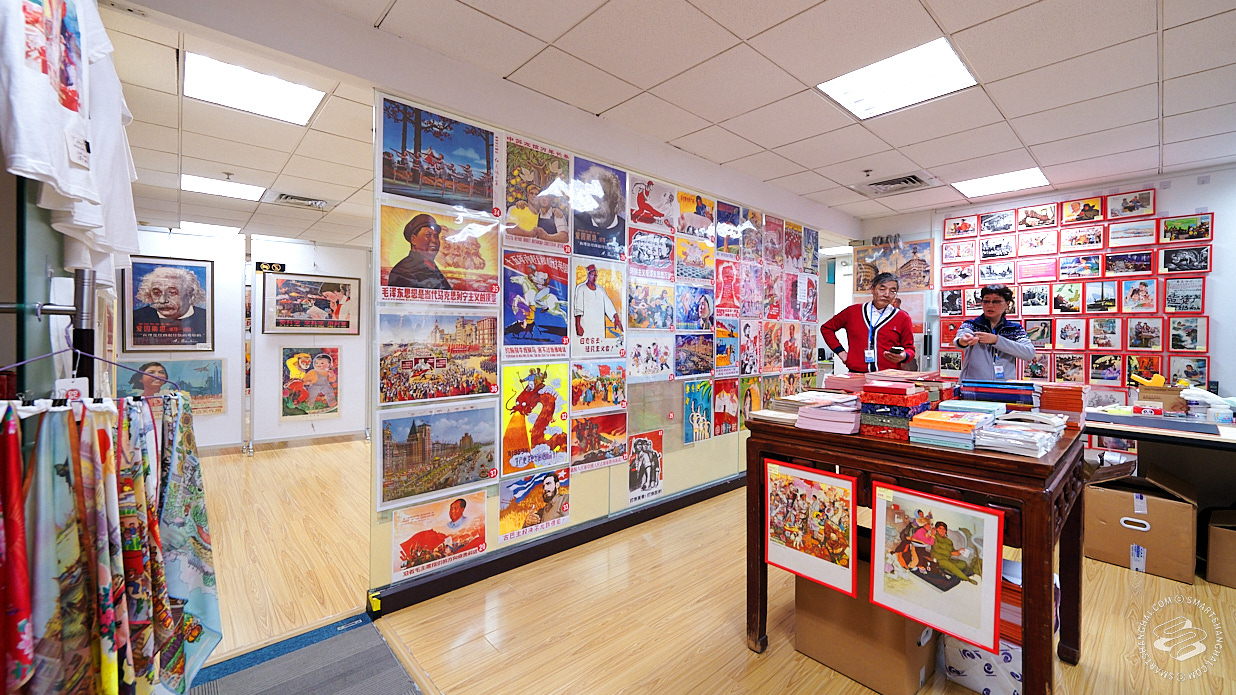 I have one basement storage room left at Huashan Road where I keep the other posters. Many of them are repeats, some of them aren't as impressive, either visually or historically, so there is not much point in showing them. I do have some 1960s pieces that I haven't shown yet — it's not time yet. Next year, for the 100 year mark of the founding of the Party, I have a series of Liberation New Year posters that I want to show.

I really enjoy the communication involved in talking about and sharing artwork. Last year I went to Harvard University to exhibit some of the posters from my collection. I also went to Stanford, Germany, Edinburgh, Canada, Hong Kong. 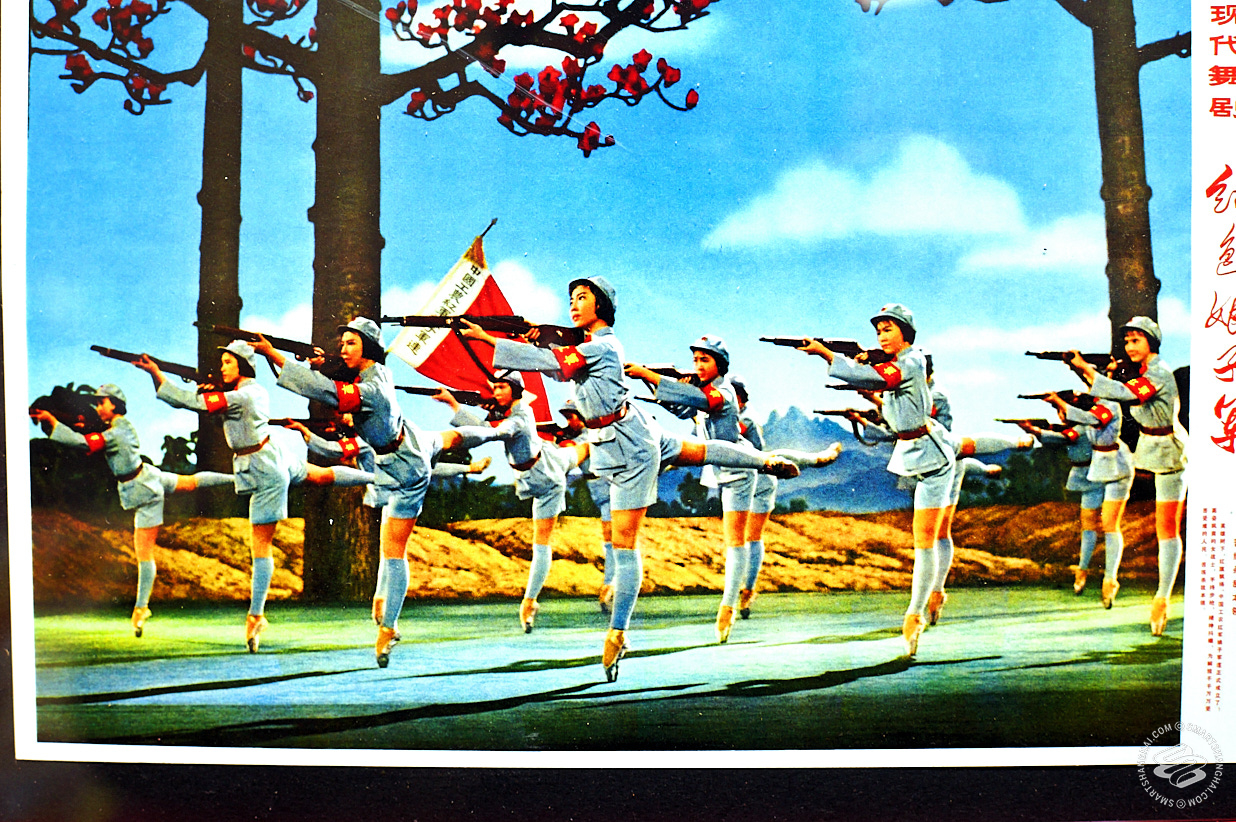 I'm here at the museum pretty much every day. I work at home in the morning, responding to emails. Then I'll usually come in after having lunch, and I stay longer on the weekends. I wrote the English text in the museum myself. It needs some updating. I still collect, too. What's the point of retirement? No, I like having something to do every day, especially something I built myself.

I'm not much of a social person. I was never very good at drinking, so maybe that has something to do with making friends. Sometimes I meet with collectors and friends who are also interested in art and history, and when I go out to eat, I definitely prefer Shanghainese food. A lot of Shanghai is so different now, but there are still some interesting places left.

The Shanghai Museum is a top museum, but for such a large city, the facility could be better. Imagine if you housed it in the HSBC Building on the Bund. Now that would be a world-class museum. 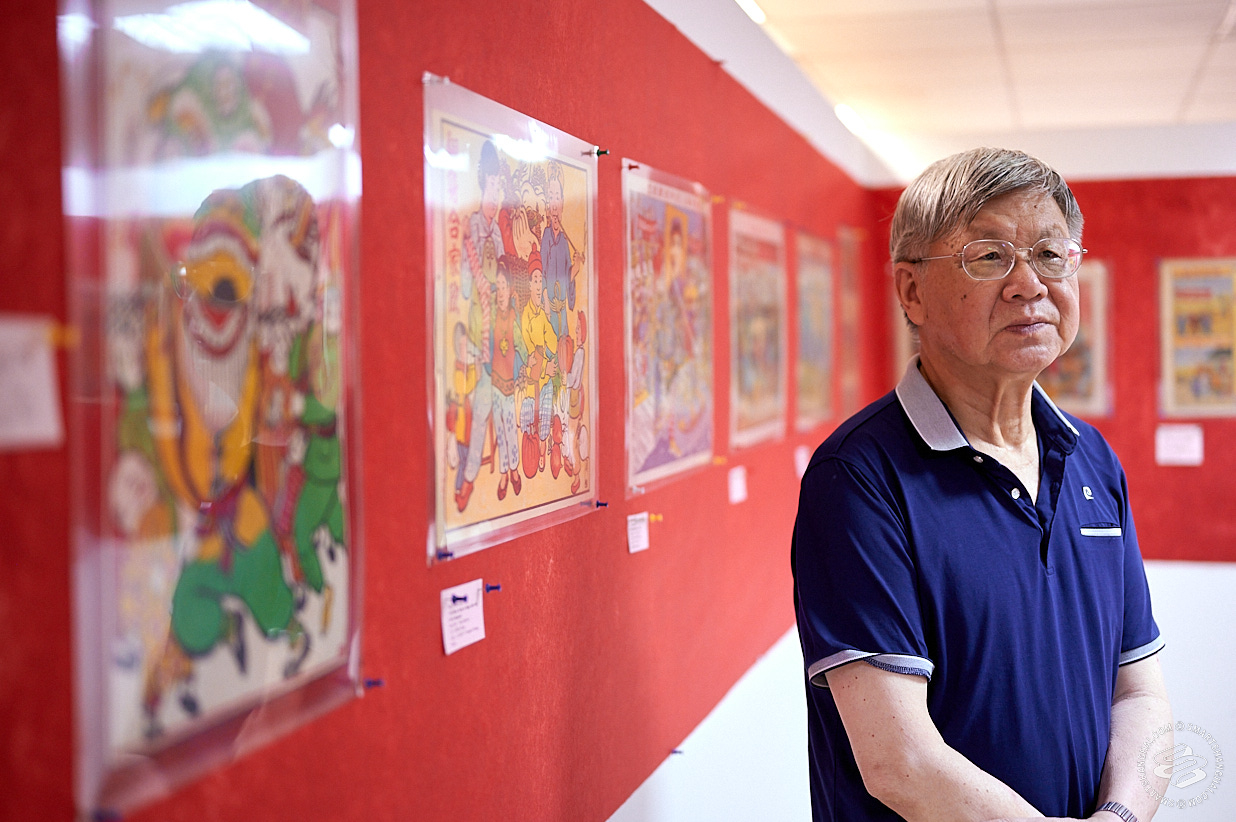