6 Very New Restaurant Openings To Get Excited About If you’ve been in the city a long old time you might remember the days before Hidden Thai was selling green curries faster than they can make them,  Coconut Paradise was a very popular Thai place, but especially popular with a rather touristy clientel. With less of those coming in, apparently Coconut Paradise's gorgeous European-style villa and lush garden on Fumin Lu have recently decided to share some of their prized real estate. Welcome PoZ, a French Bistro, wine-bar and boulangerie. They’ve taken the bottom floor of the villa and opened a small out-building in the garden where they will be doing French classics and selling bread from Lost Bakery which is owned by the same company. You'll be able to pick up fresh loafs and coffee from the small shop front they’ve built into the porch of the villa, and indulge in the wines and food in the garden space that they’ll be sharing with Coconut Paradise. Right now they are in soft opening but they will be fully operational come Friday. 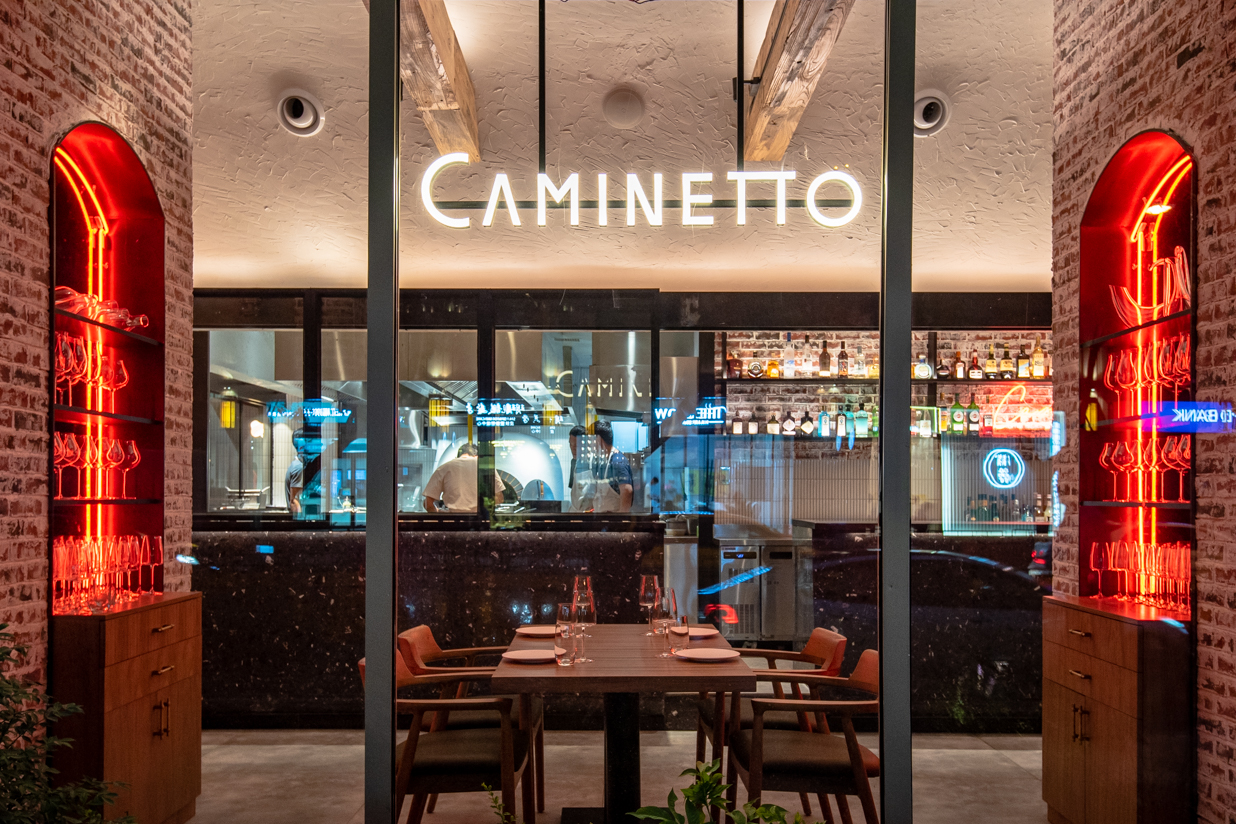 One of the higher end restaurants to open in that big new red building near Xintiandi, Caminetto is a concept by Kelvin Chai, former executive chef at Mercato who also had a hand in Shinpaku. Caminetto means ‘fire place’ in Italian and for a venue that’s essentially in a shopping mall they’ve done a decent job pulling off the warmth that the name implies. The interior of sturdy wooden beams and roughshod plastering, with a bit of warm neon glow and modern design work is a decent analogy for the food Chef Chai is serving from his open kitchen – rustic Italian with Shanghai-inspired flourishes. They make as much as they can in house, including some cheeses which you’ll find topping their menu of traditional wood-fired pizzas. Non-pizza dishes, like a jianbing inspired beef carpaccio, get a little more creative. They don’t have a finished menu yet and they aren’t open to the public, so you’ll want to wait a week or so before trying to get a table. 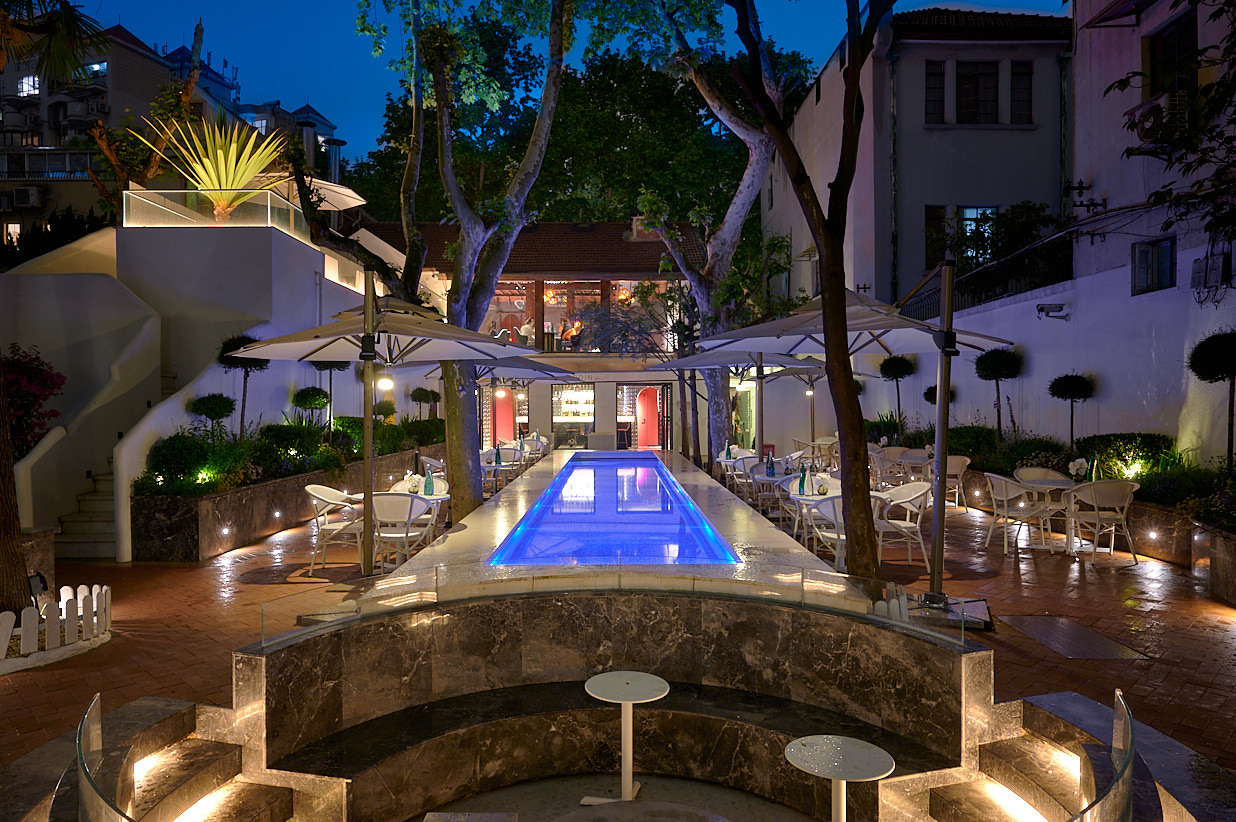 Probably the most swanky spot on the list, this fine-dining French restaurant opened up on Hunan Lu in the stunning mansion that used to be home to Lapis Thai and boutique hotel B’LaVii House. Inside the building is still much the same as it would have looked in its early years. Outside they’ve got a secluded garden with a long, Balinese-style pool. There seems to be controversy though. Le Jardin JR say they are legally entitled to operate under the name of Joël Robuchon, the late, great French chef and restaurateur. The group that operates L'Atelier de Joël Robuchon and other Robuchon venues around town says they aren’t. We’re not sure who’s in the right here but if you’re looking to spend into the four figures on degustation menus this wouldn’t be a bad setting to do it in. 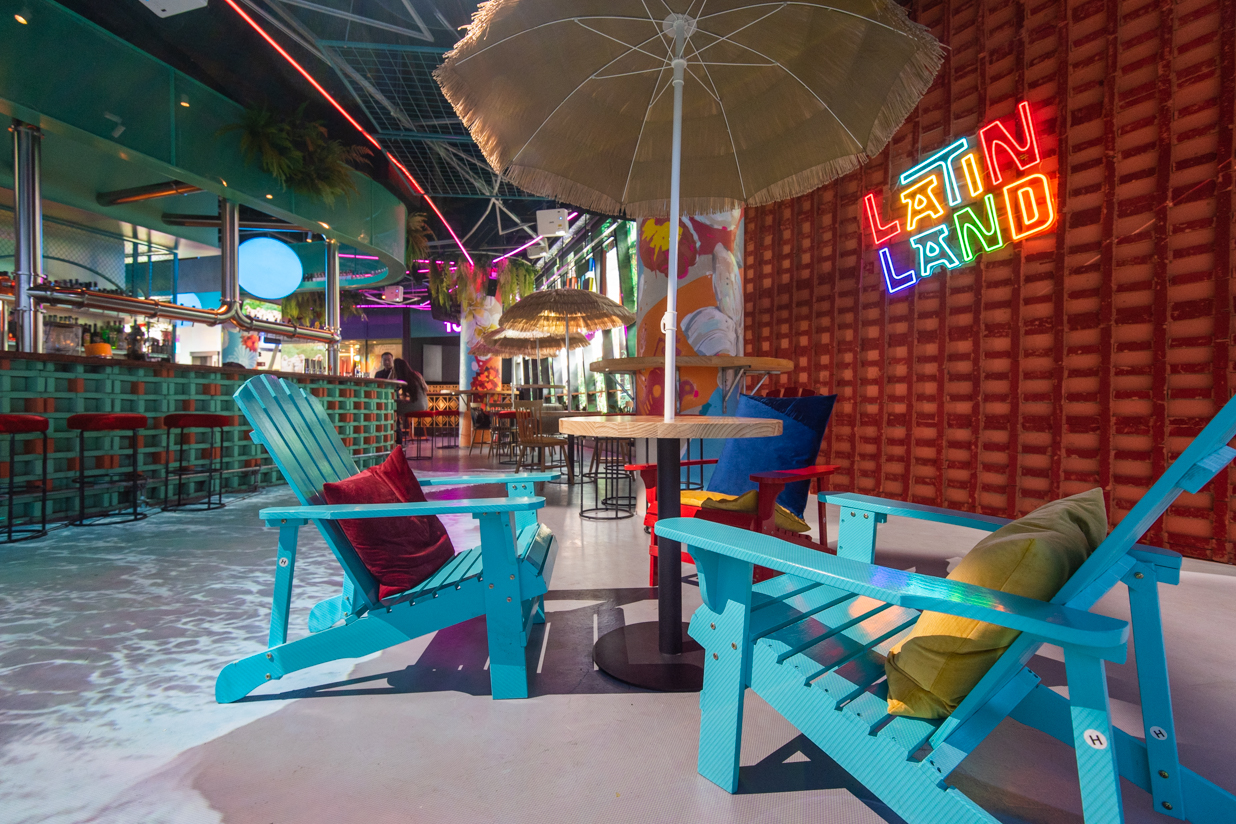 The team behind LatinLand festivals have partnered with Bourbon Group to open a venue in Wheelock Square, right above Shanghai Brew House and round the corner from KoR, in that space that used to be 10 Corso Como. They’re doing south American food lunch and dinner, and then clearing the tables away to turn the place into a club by night. The music will be – you guessed it – Latin. Décor-wise it gets beachy. They’ve got umbrellas, and some outdoor furniture painted in simple primary colors, and leafy plants hanging from the ceiling. The drinks are the sort of things you’d want to sip with waves lapping at your toes, which incidentally they also have. Not real ones though, they shoot them at the floor using a set of high-tech projectors, and for 2D waves they look pretty legit. Chef Hugo Rodriguez, who's linked to the Funkadeli group, and makes a mean bowl of ceviche, is in the kitchen with LatinLand Group's Head Chef Hugo Sazón. They’re currently only open for dinner so – noticing a theme here? – you’ll want to wait a week or so before you can go here for lunch, or a boogie. 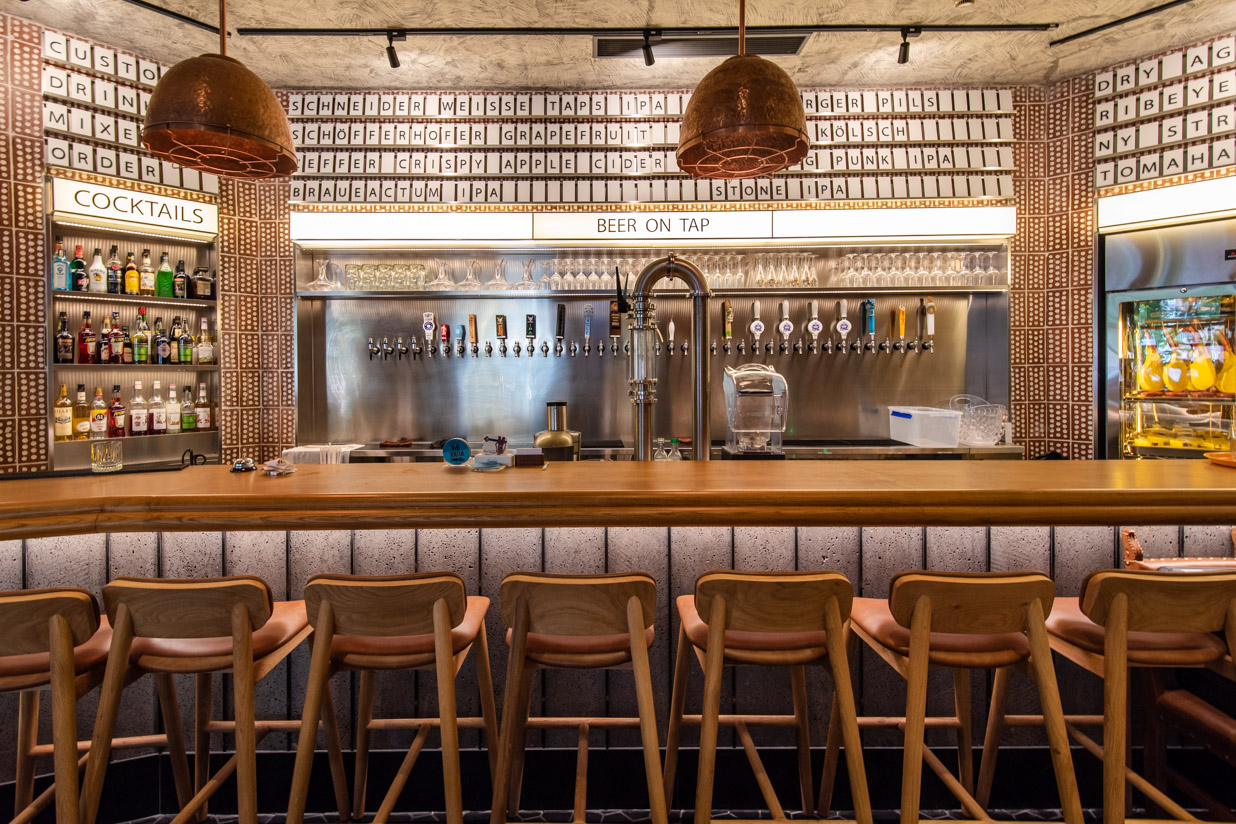 This German chain opened a second restaurant on Fumin Lu in the space that used to be World of Beer a month or so back. They serve a menu of slightly-elevated German fare that was consulted on by Chen Shi Qin a Shanghainese chef from a two-star Michelin restaurant in Italy. You’ll find all the usual German fare – except pork knuckle for some reason – and a fridge full of butter dry aged steaks that are probably the most exciting of Chen’s contributions. They’ve got a well curated wine selection and range of German and global beers wide enough to keep the spirits of the previous tenants happy. It’s big, with booth and table seating for nearly 160 people. If you enjoy drinking your beers al fresco then it might pique your interests to know they’ve got a nice terrace primely positioned for a bit of people watching on leafy Fumin Lu. 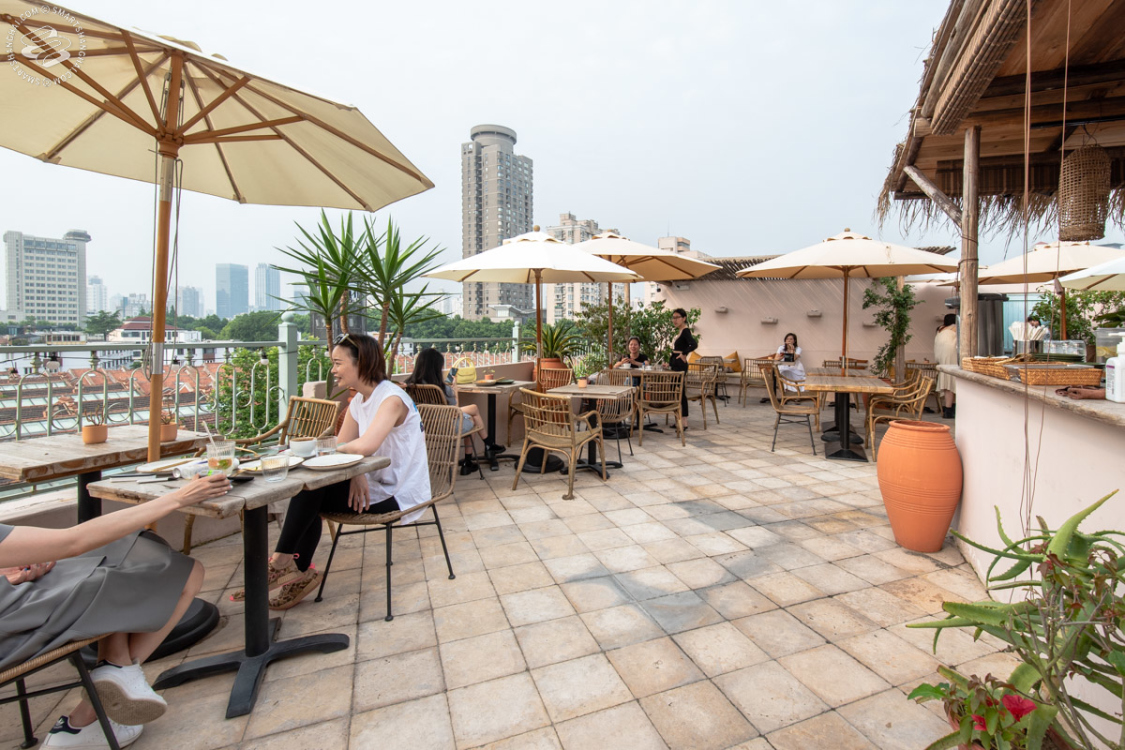 Moroccan-styled roof garden sitting atop BoboLEE Cake, which serves basic western dishes (steaks, Eggs Benedict, fake English Breakfast, etc) and alcoholic drinks. Outdoor seating is super competitive, so going early on a weekday earns a better chance of dining with a view in the sunshine. Alternatively, they do have some seats indoors. Professional cameras are banned on the terrace, but apparently this will never stop people from taking photos on their phone.