On The Radar: Blaz

A taste of the latest from the RAC team.
By Justin Fischer
2021-01-14 12:00:00
Photos: Brandon McGhee
On the Radar is a SmartShanghai column profiling new restaurants, bars, and other new places you might like to know about. Sometimes we stumble across these venues and sometimes... we are invited. As such, these are our first impressions and not a formal review.
What is it: By its own description, Blaz is a "canteen and wine bar". But the word "canteen" may conjure in some of your minds the industrial lunches served at your school or workplace. So, let's call it a bistro because that's basically what it is. This is the latest concept from restaurateur Simon Briens and the team behind RAC. It remains very much on brand: subtle twists on classic French and an eclectic selection of natural wines. But there are some key differences. No crepes, for instance, or anything else of the breakfast, lunch, or brunch persuasion. The doors here don't open until 6pm — strictly dinner and drinks. Area: 20 Donghu Lu, a villa that has been home to a changing roster of restaurants for nearly a decade and a half. El Willy dropped a pin on the map in 2007. It was soon followed by the likes of Sushi Oyama, Ochobo, Elefante, and more recently, Ekeko, Dao Jiang Hu, and Racines. Blaz has set up shop in the space formerly occupied by Ekeko. It's flanked by Cellar to Table. Upstairs is the upscale izakaya Hundo. Streetside, just outside the main gate, you'll find vegan eatery Duli, Shanghai Brewery, Liquid Laundry… I could keep going, but isn't that why we have listings on this site? 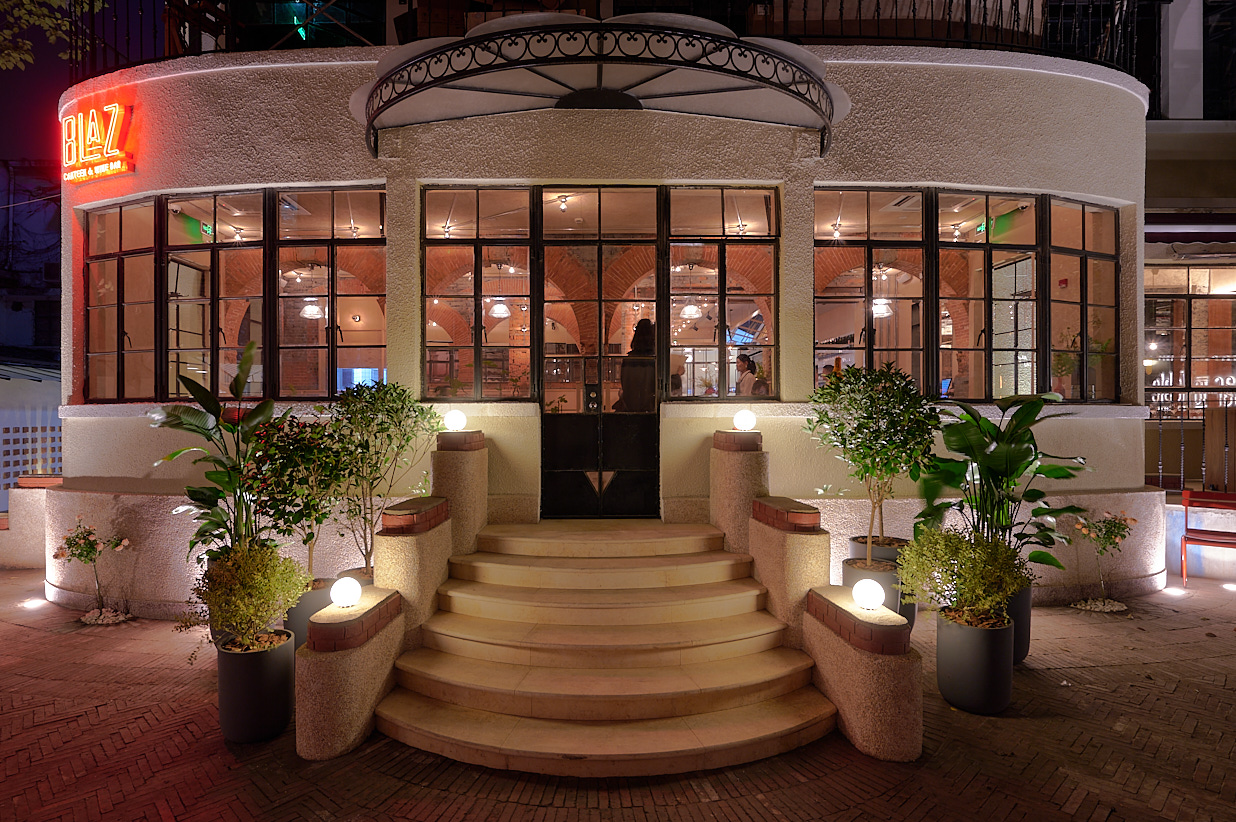 Atmosphere: Loud, lively, and full — all the things you'd want a place like this to be. People are coming here to celebrate birthdays, go on first dates, and, by and large, eat, drink, and be merry. Like RAC, shabby and chic intermingle gracefully in the decor. They break up the sparseness of buffed gray concrete floors with patches of rustic blue and white patterned tile. Just the right amount of weathered brick and electrical conduit remains exposed. The word "Blaz" is haphazardly scrawled about the place like a graffiti tag. 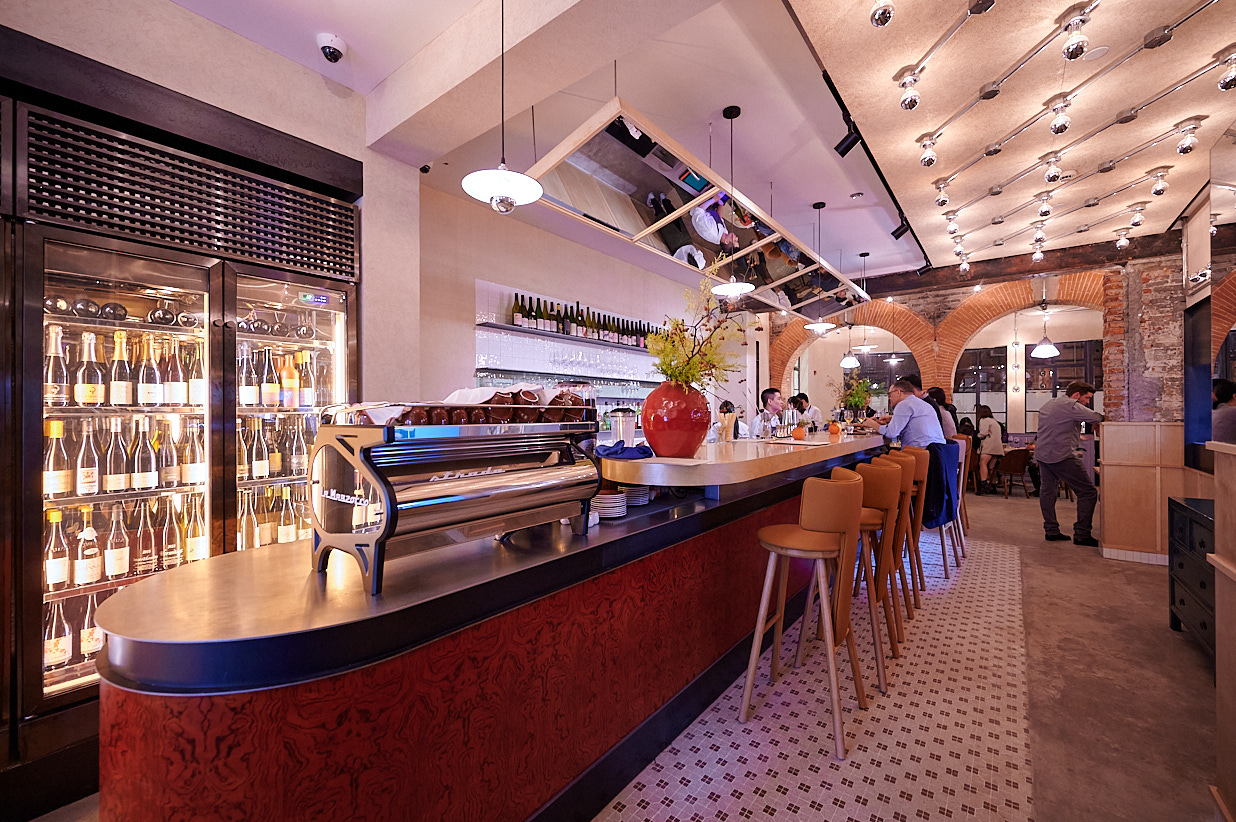 Dishes to try: The menu comes courtesy of Chef Chris Zhu, formerly of Bird. Zhu cooks with a reverence for French cuisine but adds a touch of local flavor. On most counts, it works quite well. A lot of offerings require a thick slice of crusty bread for schmearing, sopping, or topping. In the "Snacks" section, be sure to start off with the mackerel on toasts. Pickling the fish in rice wine vinegar balances out its naturally oily quality, while a dab of yuzu accentuates its distinctive sea spray flavor. It's sliced on a bias and served sushi-like atop gently toasted slices of bread. 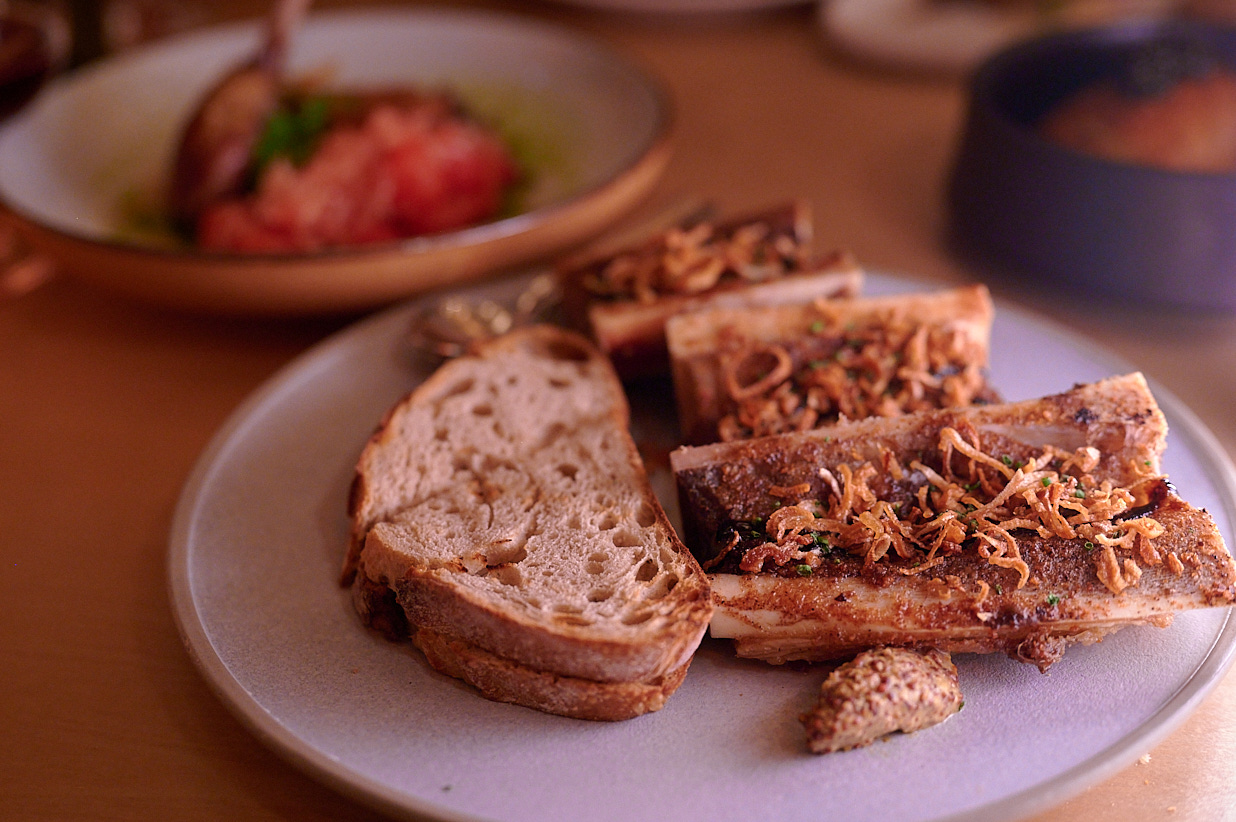 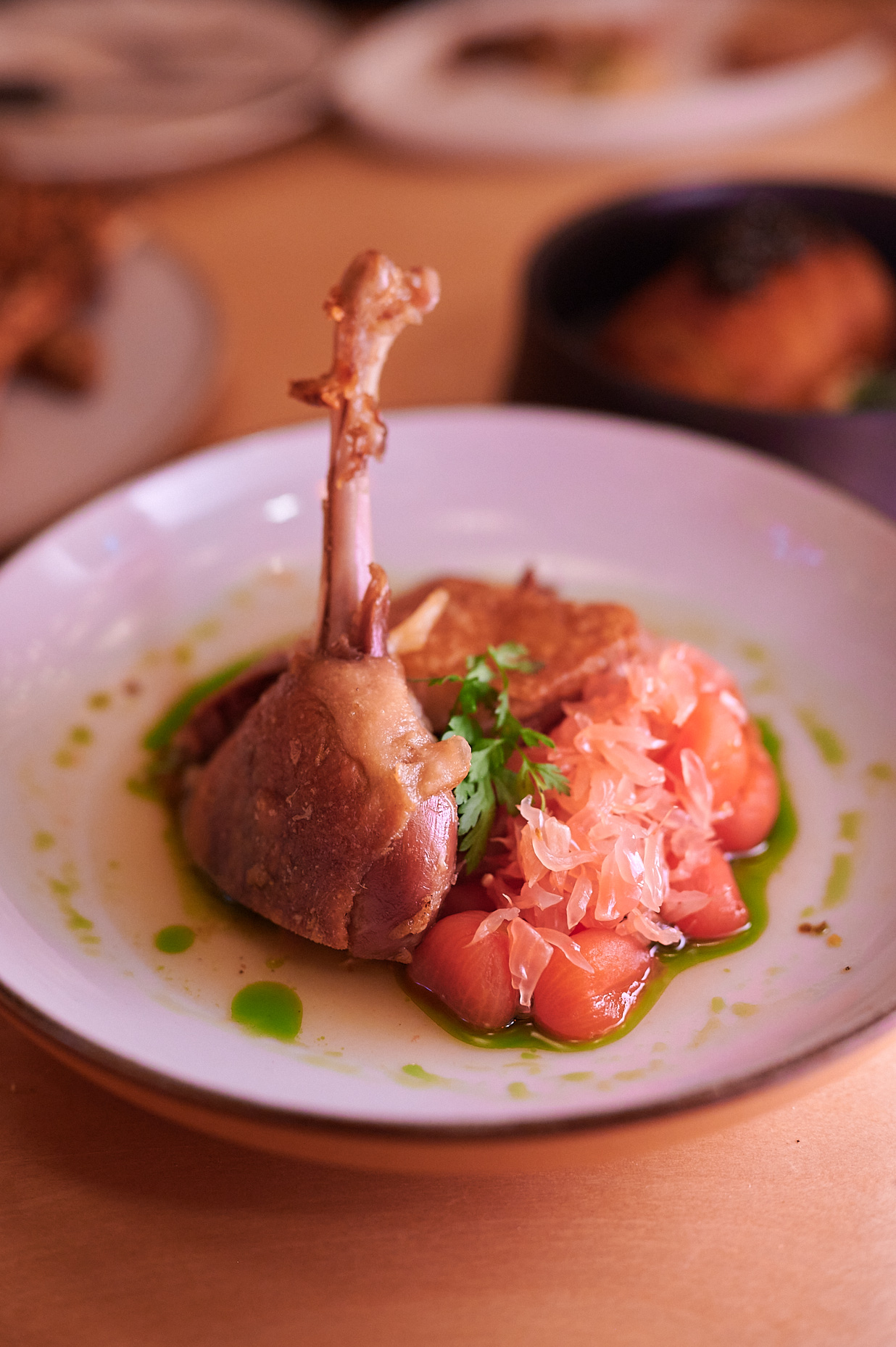 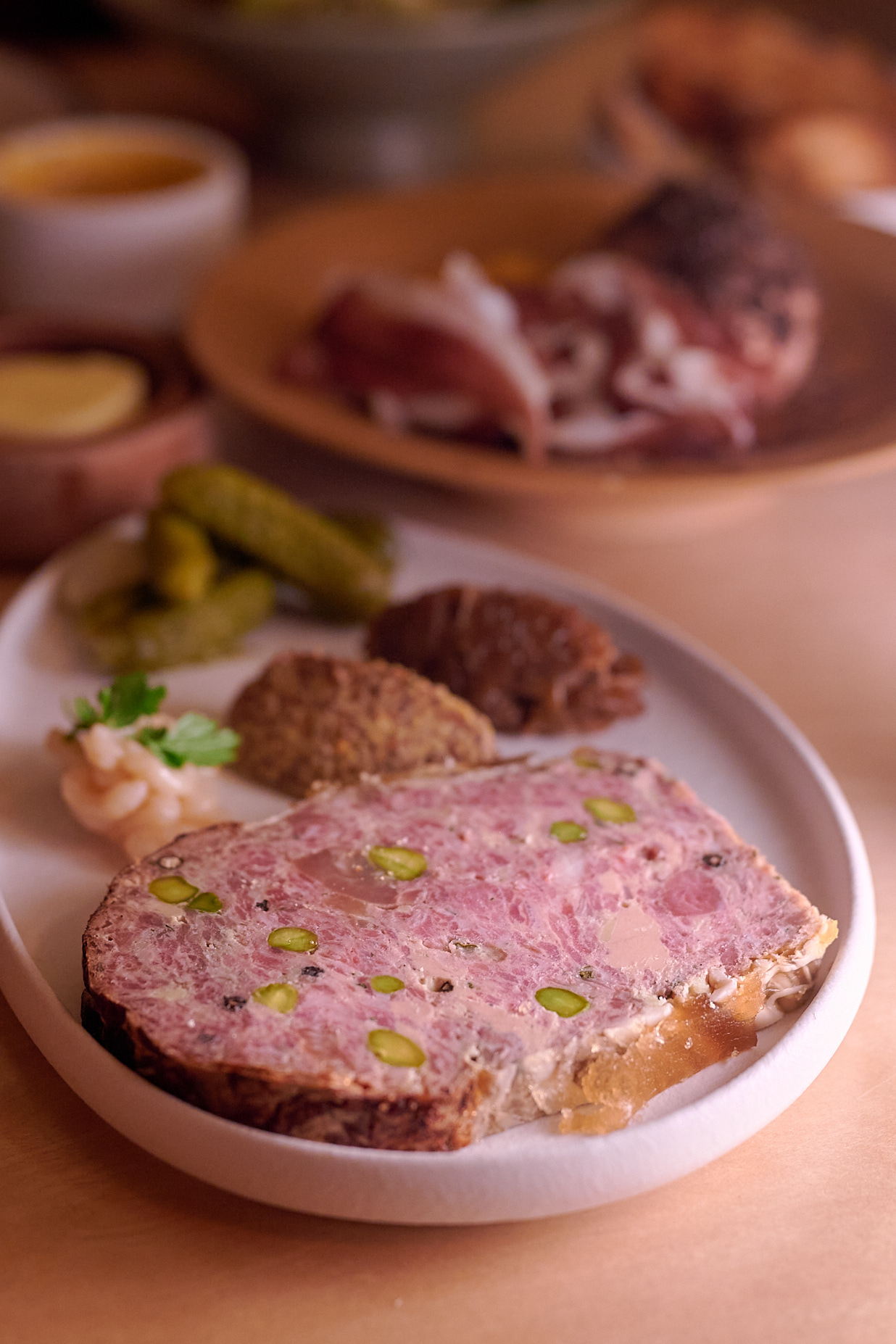 Terrines are almost mandatory in a place like Blaz, and theirs is a fairly standard, tried-and-true recipe, but it's tasty nonetheless. A marbly mince of pork is studded with rich chunks of duck liver and pistachios for crunch. Alongside it are an onion jam, grainy mustard, and a 5J Iberico ham lardo, because that's what you need more of in life — lovingly rendered ham fat to spread on your bread. There is also the foie gras mousse whipped up to cloud consistency and served as a quenelle alongside thin ribbons of house duck prosciutto. To cut through the richness of both, it comes with a tart compote of apricots spiced with ginger and clove. For best results, smear it liberally on a slice of accompanying cranberry bread. Repeat. 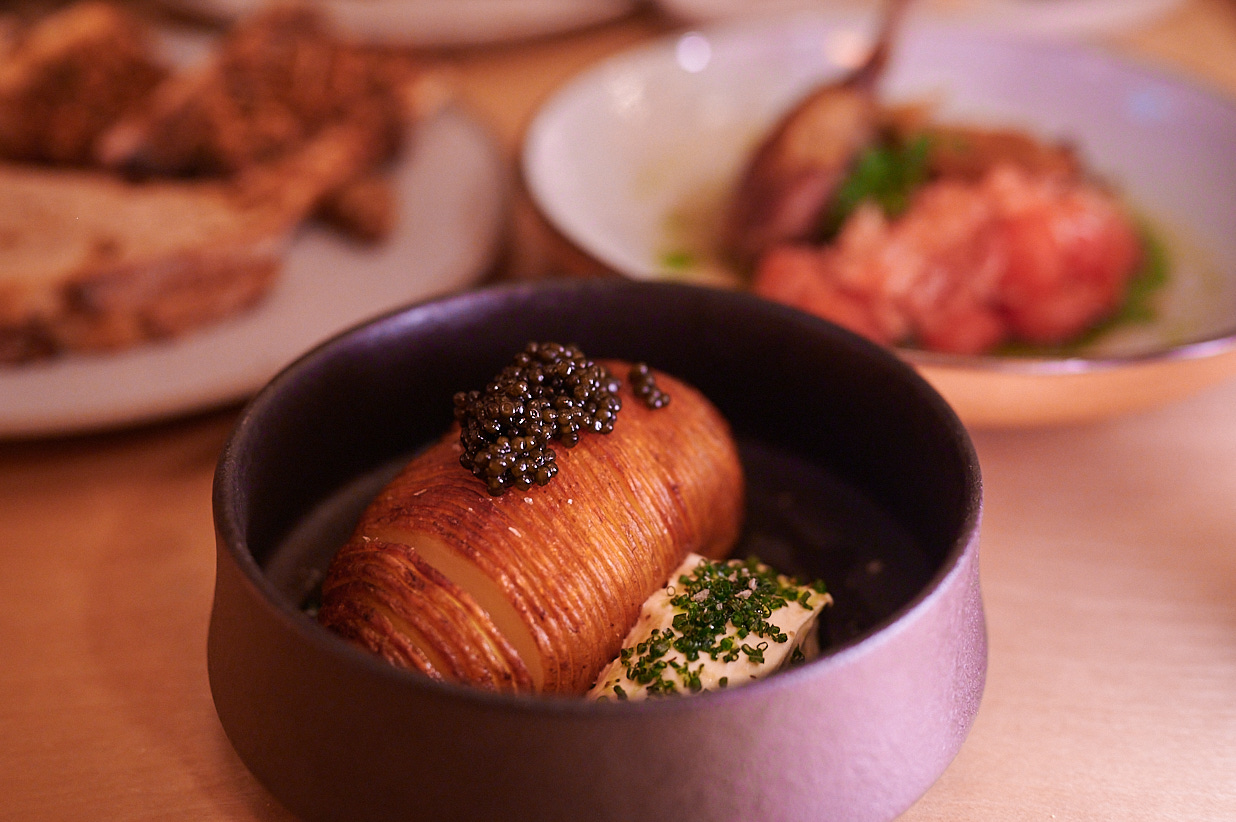 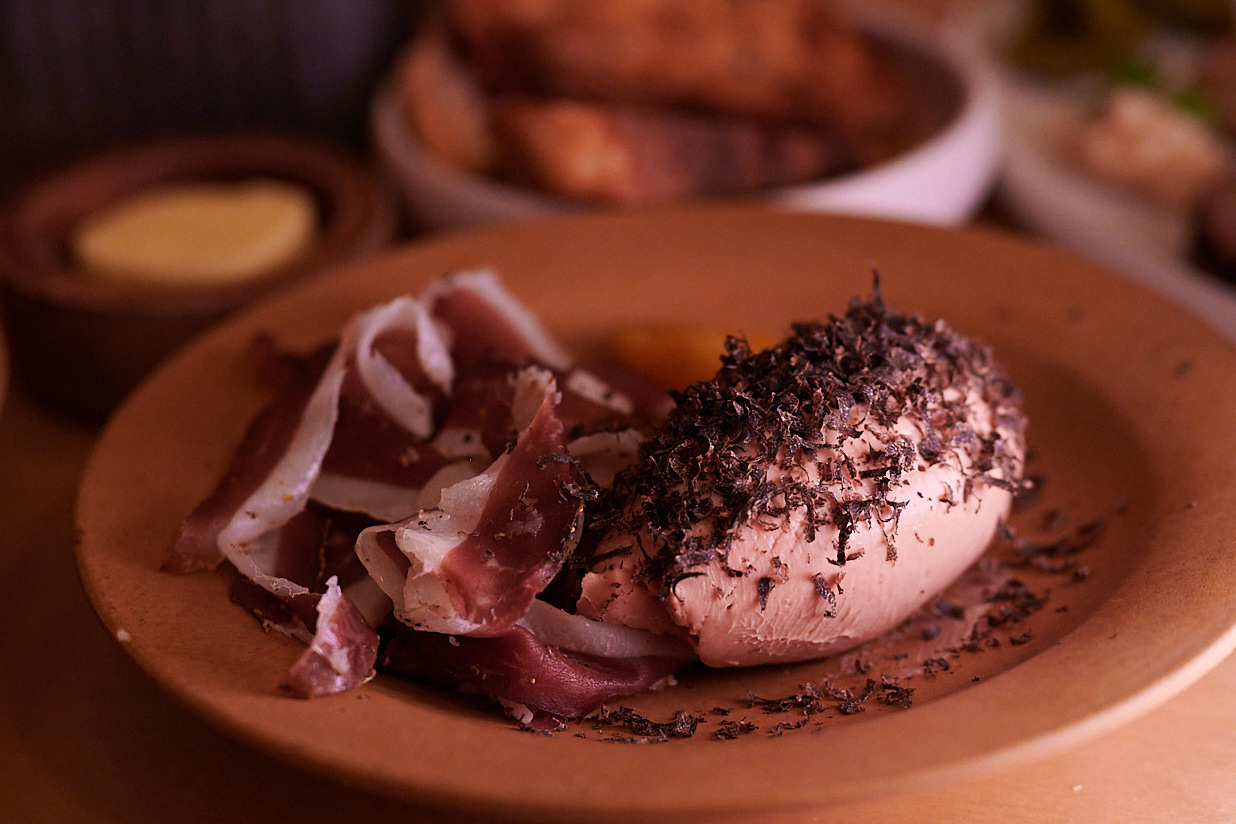 Main courses from the "Hot" section are rich, hearty, and gloriously caloric. Roasted bone marrow is usually an accompaniment or an appetizer. It takes center stage on a dish here, roasted with balsamic vinegar, topped with crispy fried shallots and, yes, served alongside more bread — toasted sourdough this time. Also worth trying is the duck confit. A glass brittle skin cracks under knife and fork to reveal meltingly tender leg and thigh meat. It's a unique presentation of cherry tomatoes and fresh pink pomelo. Meanwhile, fermented osmanthus honey gives it a subtle, sweet floral funk. If none of this is enough for you, you can fill the meal out with a couple of sides. Try the Hassleback potato with crème fraiche. For an extra 50 kuai they'll pimp your potato with a dollop of Kaluga caviar, too. 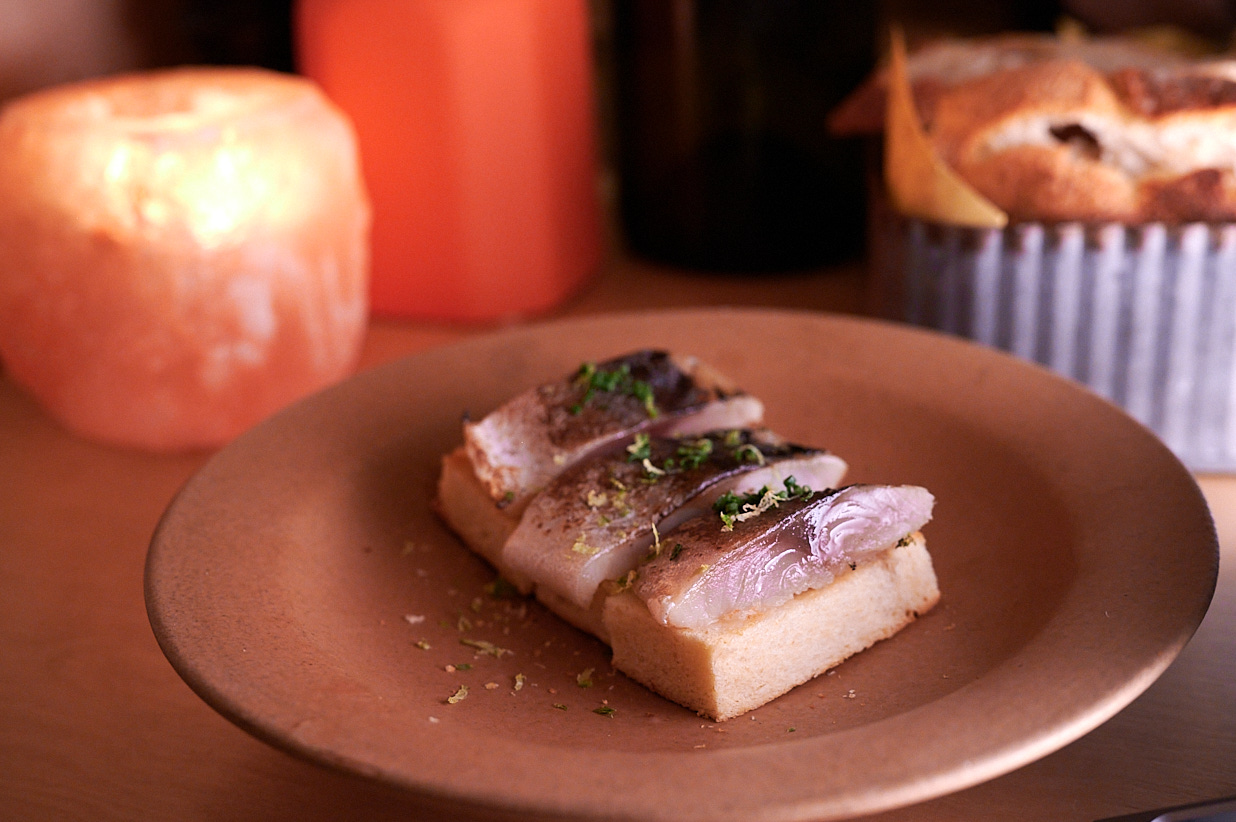 Finally, dessert. After a meal like this, the only reasonable option for us was a pear poached in sweet jasmine tea with a pear granité and a scoop of cream cheese ice cream. Good choice. 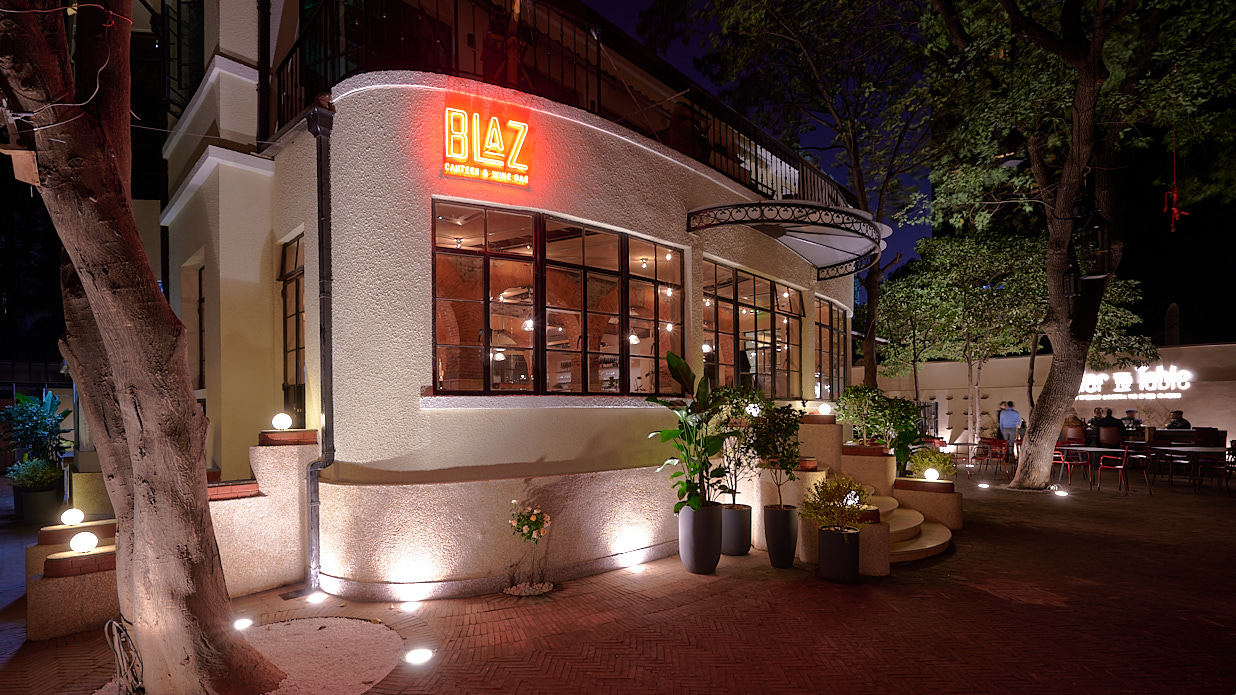 Damage: If you are a temperate diner, two people could walk out of here feeling satisfied on about 500 to 600rmb. Bring booze into the equation and that price rises considerably. Snacks and starters range from 45rmb for homemade potato chips to 288rmb for a carnivore board. Cold dishes are 88 to 158rmb. Sides are 55 to 70. In the "Hot" section you can spend as little as 98rmb for a croque madame or as much as 328rmb for the beef tenderloin. For wine, by-the-glass options start at 65rmb. Bottles start in the low 300s. 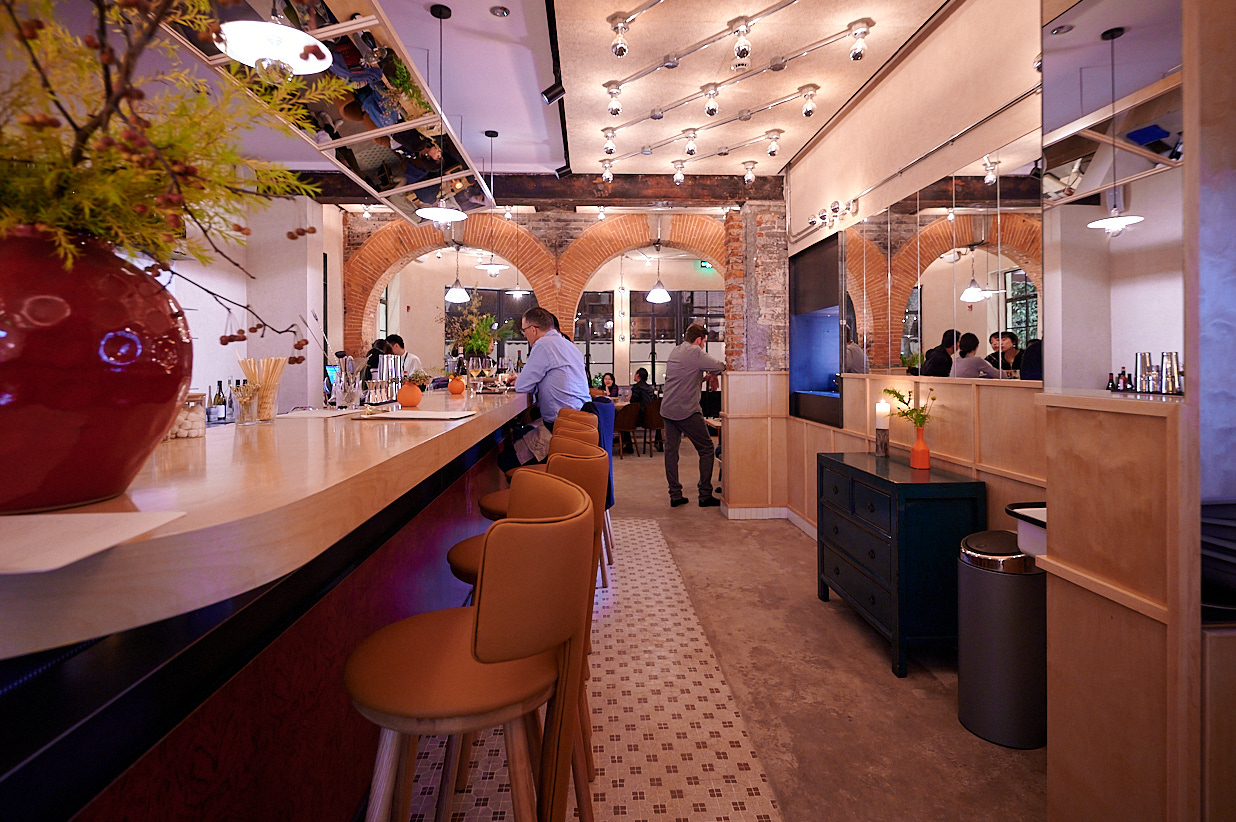 Who's going: Young people, hip people, hungry people. People who like to eat their food more than they like to photograph it.