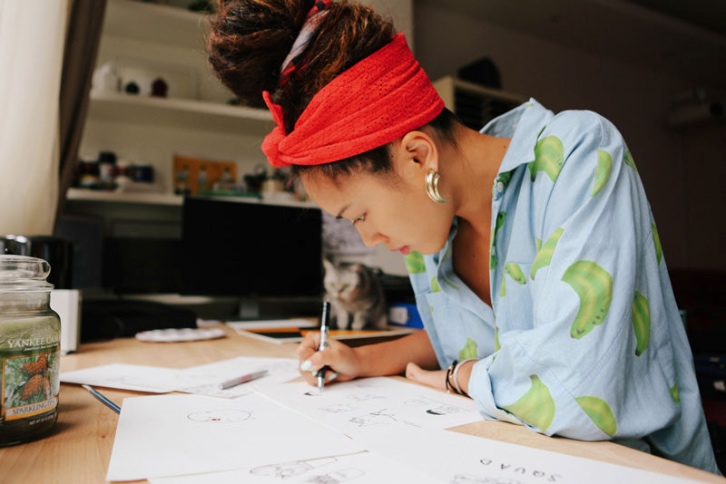 Let’s Get Weird! A Conversation with Doodling Dreamer Ton Mak

By Sarah Boorboor May 27, 2017 2017-05-27 Arts & Stage
Ton Mak is a visual artist who has created her own doodle society of little creatures called Flabjacks. According to her what makes a flabjack a flabjack is their “curiously ambiguous face, rotund body, and exotically contrasting personalities.” Simply put, it seems what makes a flabjack a flabjack is being cute AF. In an endearingly grotesque kind of way. Ton sat down with SmartShanghai to answer a few questions about her solo show Fanana opening this weekend at Undefine M50. The show will run from this Saturday, May 27 to the end of June. Smsh: I’ll ask the question we’re all thinking.  What’s with the chubby creature fetish?  What do these cute little guys mean to you?

Ton: Somewhere along the way, I started associating friendliness with chubbiness as a kid. I just found round and bouncy shapes so much more happy to look at, and I still do. In school, we studied the usual essentials, Van Gough, Egon Schiele, and Klimt stuff for example. As much as I was into it, I found that whenever the paintings had a slim physique, it always seemed a bit sad…anyways, I love pigs (especially this breed call kun kun pig), elephant seals and pugs. I love root vegetables. Naturally, I am drawn to funky shapes I guess. Smsh: When and where did you doodle your first Flabjack?

Ton: Flabjacks took shape quite organically and became the way it is now in a doodle-diary-journey over the years. My last full-time job in advertising is to thank for the official birth of Flabjacks. I was a little stressed at times. So, I left a lot of Flabjack-ish drawings on people’s desks. Doodling was a meditative moment [during] every work day back then.

Smsh: You’ve gone from doodling, to installation art, to a Dug the Durian action figure. How do pick your projects?

Ton: I have always doodled and will always be doodling quite naturally at some point everyday. But what I also love is to see the doodles take shape in different ways. It gives people a new way of interaction. From seeing, to poking, to hugging…and I guess sitting on too, now that I have started doing bean bags. I really hope for Flabjacks to have more of a spatial influence eventually, by doing more installations and giving it more scale. Making wonderlands of sorts with these imaginary creatures is sort of the dream plan right now. SmSh: You have an upcoming solo show at Undefine M50 opening this Saturday.  Tell us a little about the show.

Ton: So…the show opening this Saturday is all about bananas, call “FANANA”. My background in university is in Anthropology and I specialized in phenomenology and animism in my final year. Animism is the belief that seemingly dead objects can have souls and identities of their own too. Just like how some people worship crystals, trees and golden nuggets. I love giving mundane objects and forms a new identity. But ahhh, that’s the serious stuff. In the grand scheme of things, “FANANA” is good vibes. All the art, installation forms, and toys lean towards the positive. That’s my intention at least! So whether or not people read into the background story of it, most importantly is that they find some joy from the happy space. You don’t really need to know what’s going on, but just kick back and enjoy. SmSh: When the show is over, what’s next for you?  Fingers crossed we’ll get an animated film called The Flabjacks Take Shanghai.  I’d love to hear what the Flabjacks sound like.

Ton: I would love to too! Animation is on the dream list. I just want to see them jiggle, itch and burp. 5 seconds is enough. But for now, I have been writing a lot of weird stories of sorts that I will be able to share next year. In the mean time, I am also launching a line of clothing with DOE at their new Xintiandi store in June. That will be fun stuff. I am also planning for more exhibitions abroad next year so once “FANANA” is done, I shall be off shopping for more materials. Check out the show and meet the artist herself at the opening this Saturday, May 27 from 2-5pm at Undefine. Go meet some flabjacks.