We just tried Homeslice's Seasonal Flavors and Really Liked Them

By SmSh Apr 23, 2021 2021-04-23 Dining
Homeslice Pizza launched their new seasonal flavors a few days ago and sent over a few free pizzas to the SmartShanghai HQ today for lunch. We didn't plan on writing about them -- and neither were they expecting us too. Homeslice were either just being friendly or knew that their pizza's had the power to compel us. Sending over free stuff to SmartShanghai is just their way of being nice and saying thanks for listing their four venues on our site. (Thank you, and you're welcome Nat).

We took our first bites and really liked them. So, we had to write about it. And, as most of you are aware, getting SmartShanghai excited about anything isn't easy, especially for things that could be a bit cheaper. But hey, a local home grown brand doing pizza that's so much better than what some cooperations do, deserves a slice of coverage shall we say? "Made in Shanghai" is can be something to be proud of.

Here's the dish on these new pies:

Homeslice puts a lot of thought into their new pizza, to wit, they send out a 600 word press release. Homeslice has a roation of guest chefs creating new flavors, alongside new seasonal flavors. This month it's Rachel Gouk who you know from food blog Nomfluence doing the Pork Satay pizza, the other three are Homeslice's seasonal releases. 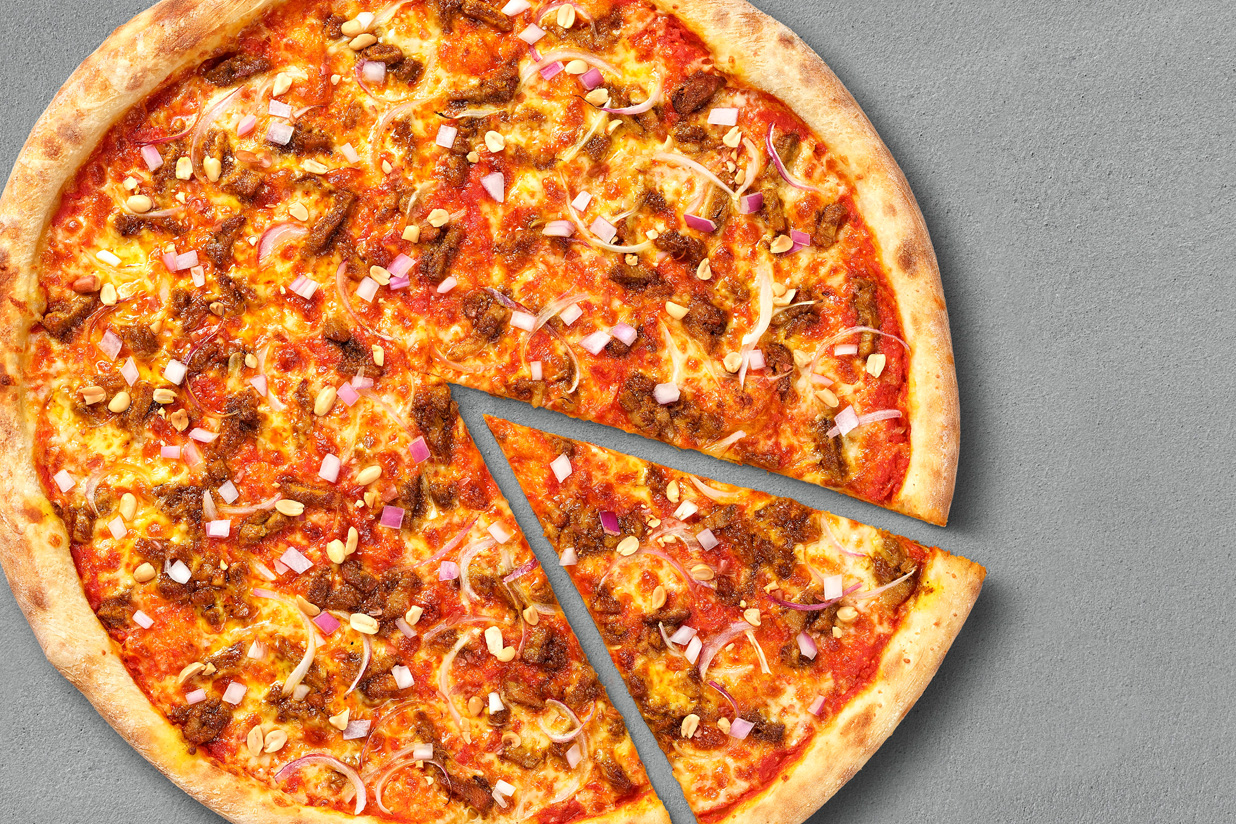 Rachel is from Kuala Lumpur, and now to quote a the press release ::hell freezes over:: "Rachel is a proud proponent of her nation's amazing cuisine, offering up twists on it at her events, including dishes such as smoked brisket rendang and belacan fried chicken sandwiches. Her pizza is the same, with the classic Pork Satay in pizza form. It's inspired by Penang, Malaysia's food mecca and historically Chinese-majority state, where pork satay is a popular skewered delicacy. Pork, marinated for 24 hours in a heady mix of spices and aromatics and then roasted, is the main event, along with onions, roasted peanuts and raw onion, on top of a curried tomato base. It has all the vibrant tastes of Malaysia in pizza form (you can skip the raw onion, but we think it's essential)."

We couldn't have said that better. So we quoted it.

Homeslice donates 10% of all revenue from the seasonal pizza to Stepping Stones, a well-respected charity who provides English teaching and other support to the children of migrant workers in and around Shanghai.

Without much ado, food pornography: 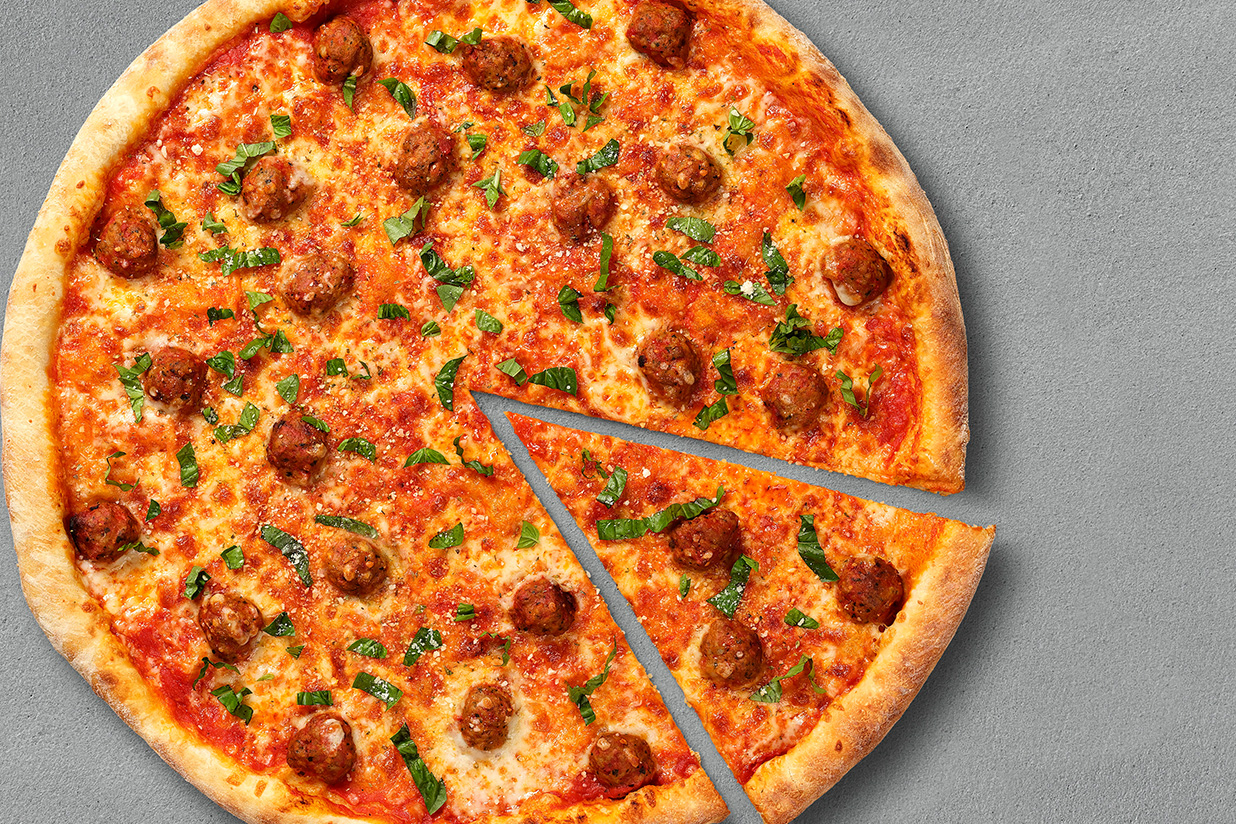 
This was the one our team was surprisingly the least excited about. From the presser: " It's based on the classic dish of Italian-American homes and restaurants and was an obvious candidate for a pizza. It's not rocket science: housemade Australian beef and our usual heritage breed pork meatballs (made with Nonna's secret recipe), on top of the sauce the meatballs were cooked in, and finished with basil and parmesan.". The meal balls are cut in half, so you're not biting into a giant ball and are surprisingly moist/soft to bite into. 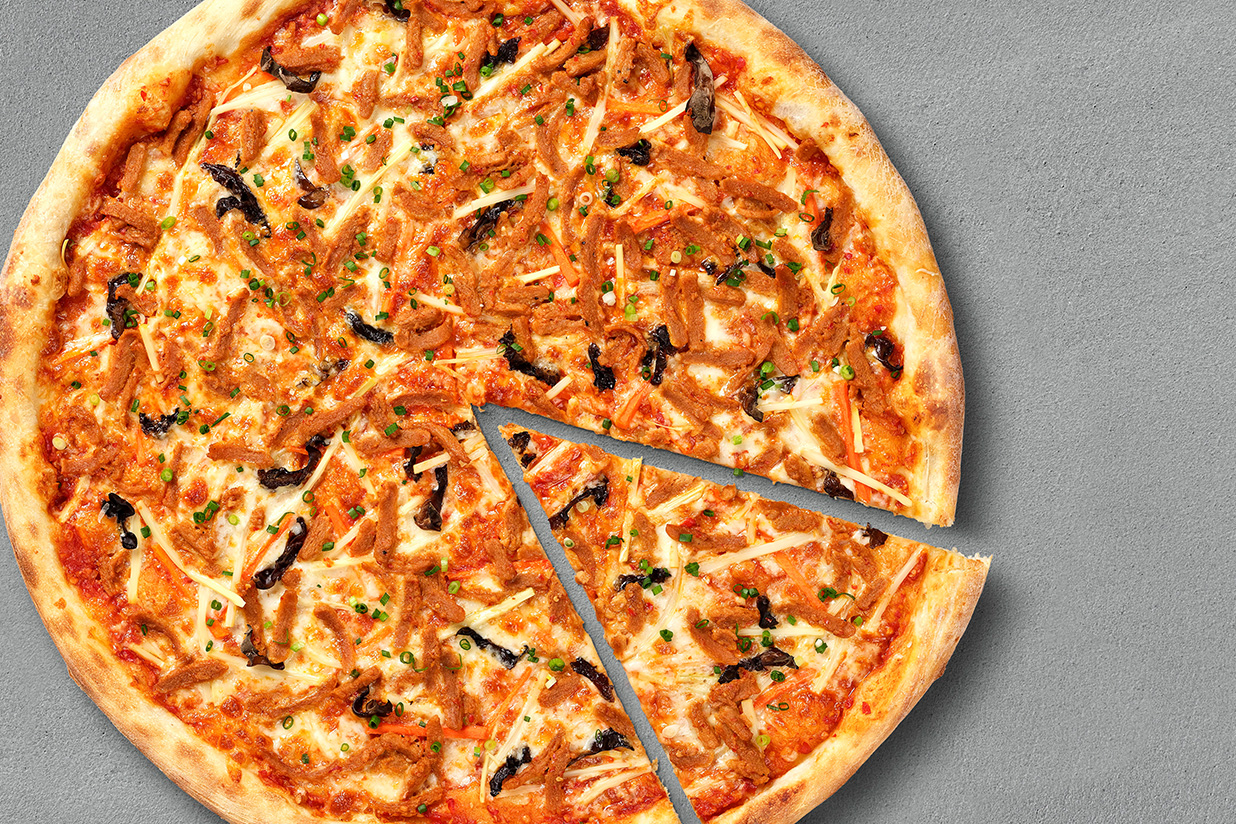 That's the one that everyone agreed was a surprise hit. Really interesting (good) flavors for a pizza, and the OmniPork element was the star rather than an afterthought. Order this, and if you don't like it you can unsubscribe from SmartShanghai, and tell everyone we have bad taste: " It's based on the classic Sichuan dish of "fish-fragrant" or "yuxiang" pork, and we've made a sauce just as you would for the dish itself. Plenty of garlic and ginger, pickled chilis and other seasonings make up the base. Then there is Omnipork's plant-based protein slices, bamboo, carrot and wood-ear. We will also be ordering this as a vegan option (with our housemade vegan cheese) by the whole pie in all sizes." 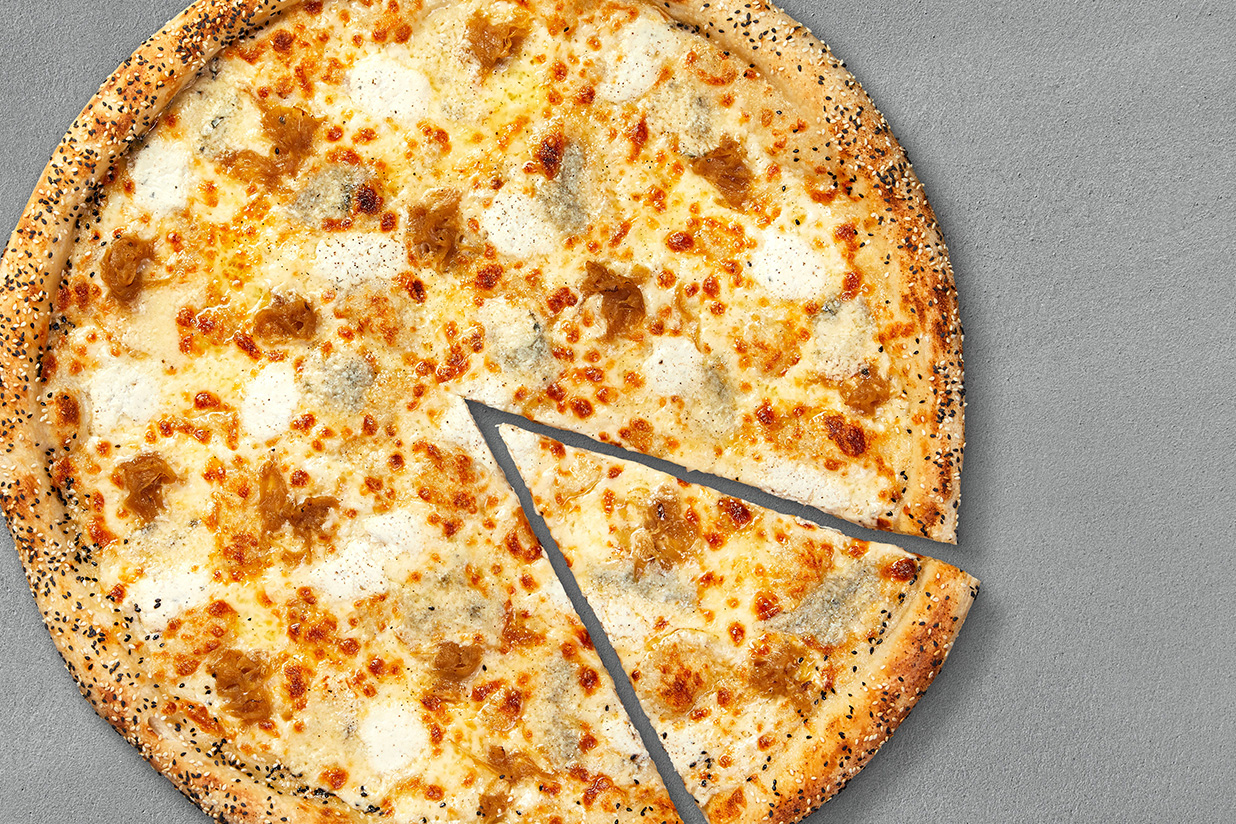 The runners up. "Our house made ricotta, gorgonzola, provolone picante, mozzarella (two types) and parmesan are set off with caramelized onion and finally crowned with a sesame crust in the style of an everything bagel. " It was the caramelized onion as a flourish that really sets this apart from other four-cheese options around the city.

Homeslice is on all the delivery platforms, like JSS Delivery (disclaimer, we do actually get paid by them), just click on the "Order via JSS Delivery" button in any of these venue listings, or get them in their restaurants, available for the next 3 month or so.

Also, we feel we must say that there is one absolute downside to these new pizzas. You'll eat more than you should. So avoid these if you are needing to be productive.