We check out a historical building in Xuhui, now turned into a culture hub.
By SmSh - Photos: Angela Leung Aug 24, 2020 2020-08-24 Dining
Just across the street from the Shanghai Symphony Orchestra Hall is an imposing six-storey apartment block called the Blackstone Apartments. It has just finished being turned into the latest F&B slash lifestyle slash cultural tourism hub in Xuhui. 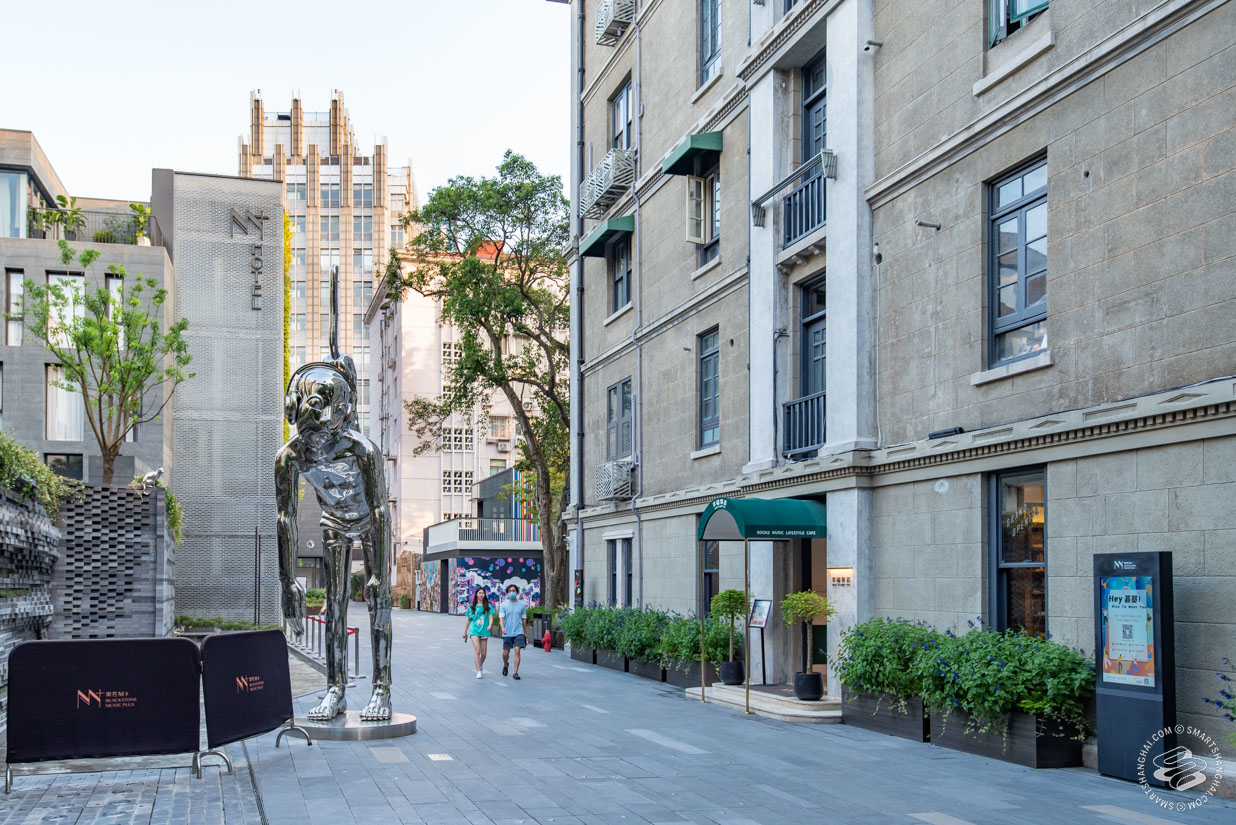 Named after the missionary who built it, the Blackstone Apartments opened in 1924. At the time, it was prime, Grade-A, grass-fed luxury real estate, possibly the best in China, housing Consuls General, military officers and other high-society hobnobbers. At one point, China's Premier stayed here. It had elevators, a heated pool, foreign butlers, central heating, tennis courts, a ballroom and its own restaurant.

Then some history happened — a lot of history — but we're mostly concerned with the last few years, when the Xingfuli development company, which did some work on Panyu Lu, got its fingers into the complex. As part of Xuhui's plan to open a bunch of its historical buildings to the public, they've turned this little stretch of Fuxing Zhong Lu into the Blackstone Music Comprehensive Park. It opened to the public back in June. The ground floor of the actual Apartments has been turned into a bar, a bookshop and a cafe (the upper floors are still residential), while the complex behind it, which held the Xuhui House Management Bureau until 2015-ish, has borne the brunt of the redevelopment: three buildings of food, drink, a smidgeon of shopping, and a boutique hotel springing up. Here's what it all looks like. The ground-floor front of the main building's west wing has been turned into a swank red speakeasy called Blackstone Exchange, accessed via a side entrance in the next lane, 1333 Fuxing Zhong Lu. It hits every speakeasy buzzword: secret button for the door, dark Art Deco decor, themed VIP rooms hidden behind false walls, and a cocktail menu that starts at 98rmb. 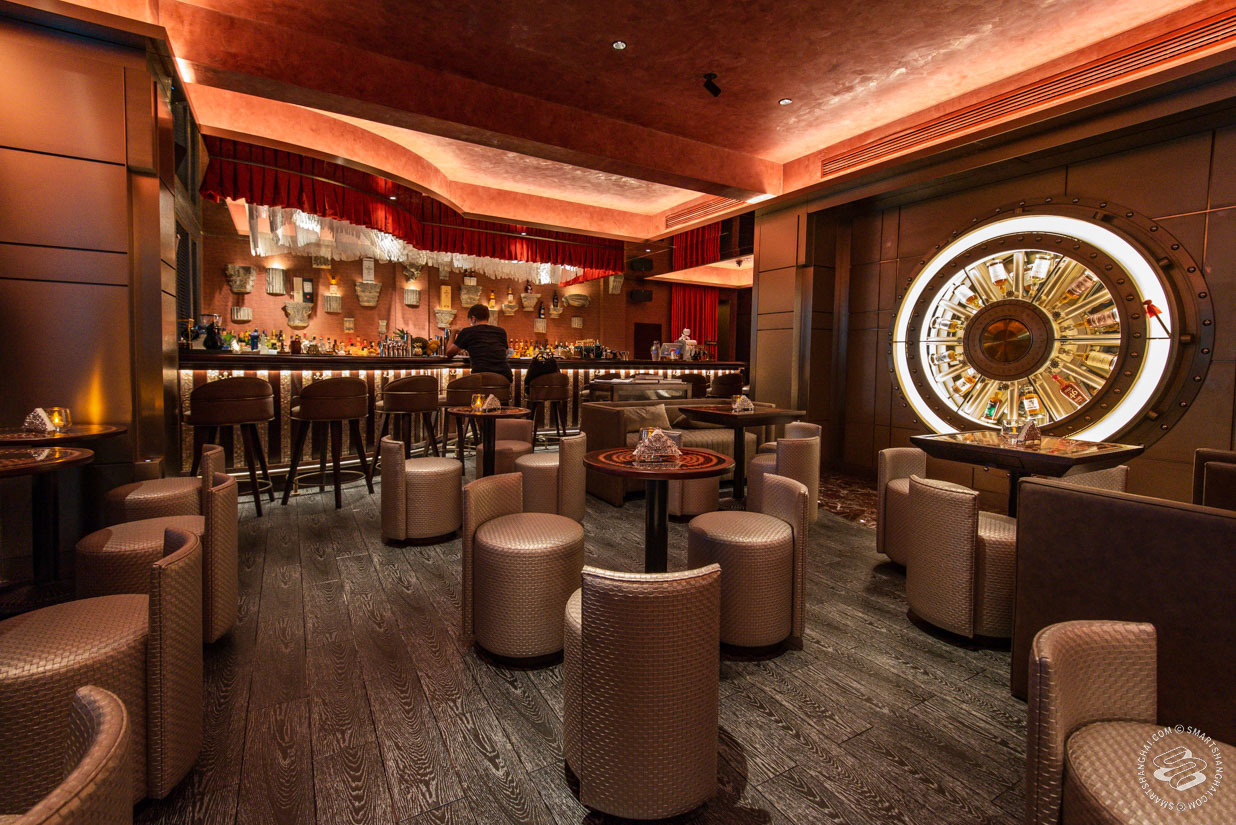 The head bartender used to work at Blackstone Magic Bar down in the Pit which might explain the involved presentation: the Nice Backyard Garden (118rmb), for example, is served in a perfume bottle. The drinks skew towards sweet — think St. Germain and lychee syrups — and the menu descriptions on the faux-newspaper menu meticulously break them down by ingredient and profile (35% Alcohol, 35% Coffee, 15% Sweet, 15% Bitter). It even plots them on a two-axis High/Low Alcohol/Strong/Light graph. Ten points for effort. Not quite able to put a finger on why, but the Blackstone Exchange feels like it's a place for pin-striped bankers to drink, or at least a place for people to LARP at being robber barons. Might be the menu's six double-page spreads dedicated to an exhaustive list of Scotch, or the giant whisky vault door, the safety deposit box corridor, the VIP room decorated with antique abacuses, or the replicas of every major international stock exchanges' marble columns behind the backbar. Perhaps unsurprisingly, the owner, who seems enamored with the building's legacy of luxury and glamor, comes from a finance background himself. Not especially ground-breaking, but a fun jolt of energy through Shanghai's favorite bar genre, which doggedly refuses to die. 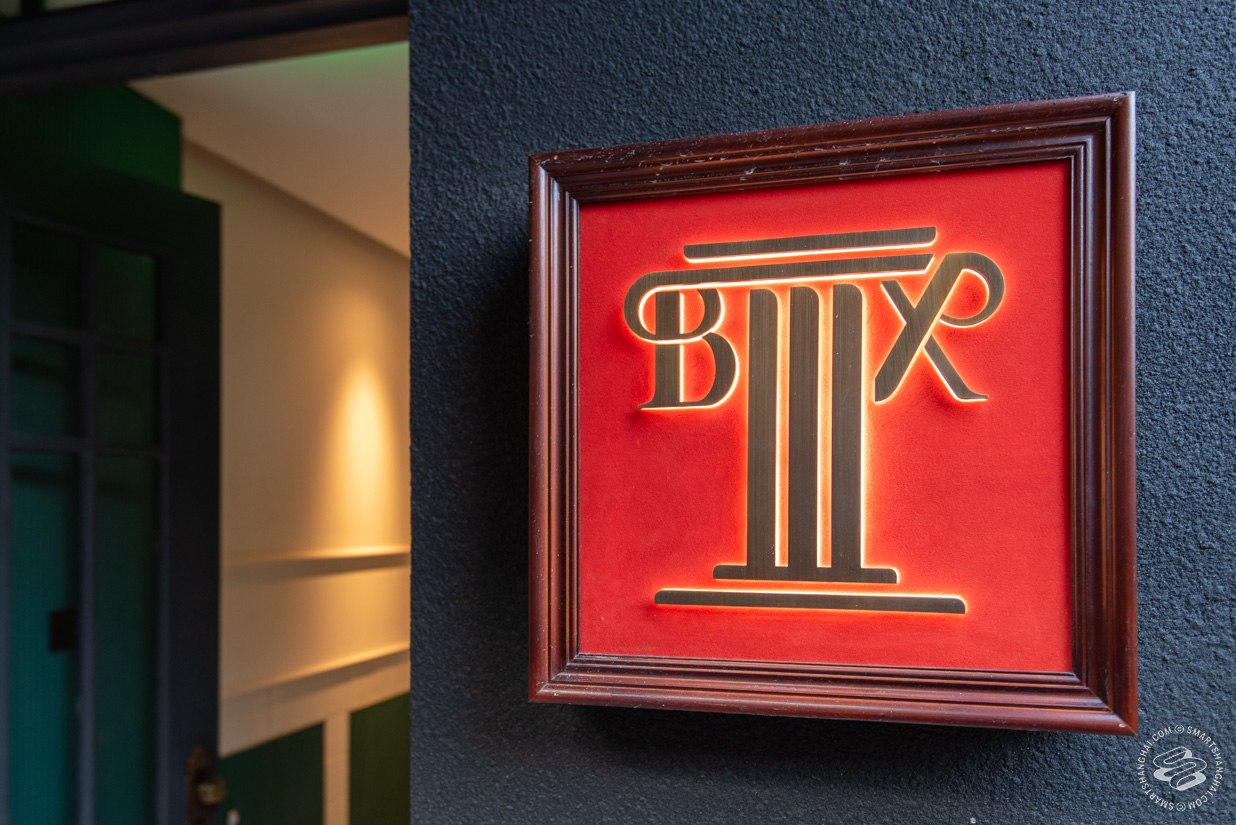 Flanking the other side of the Apartments is Nice To Meet You. 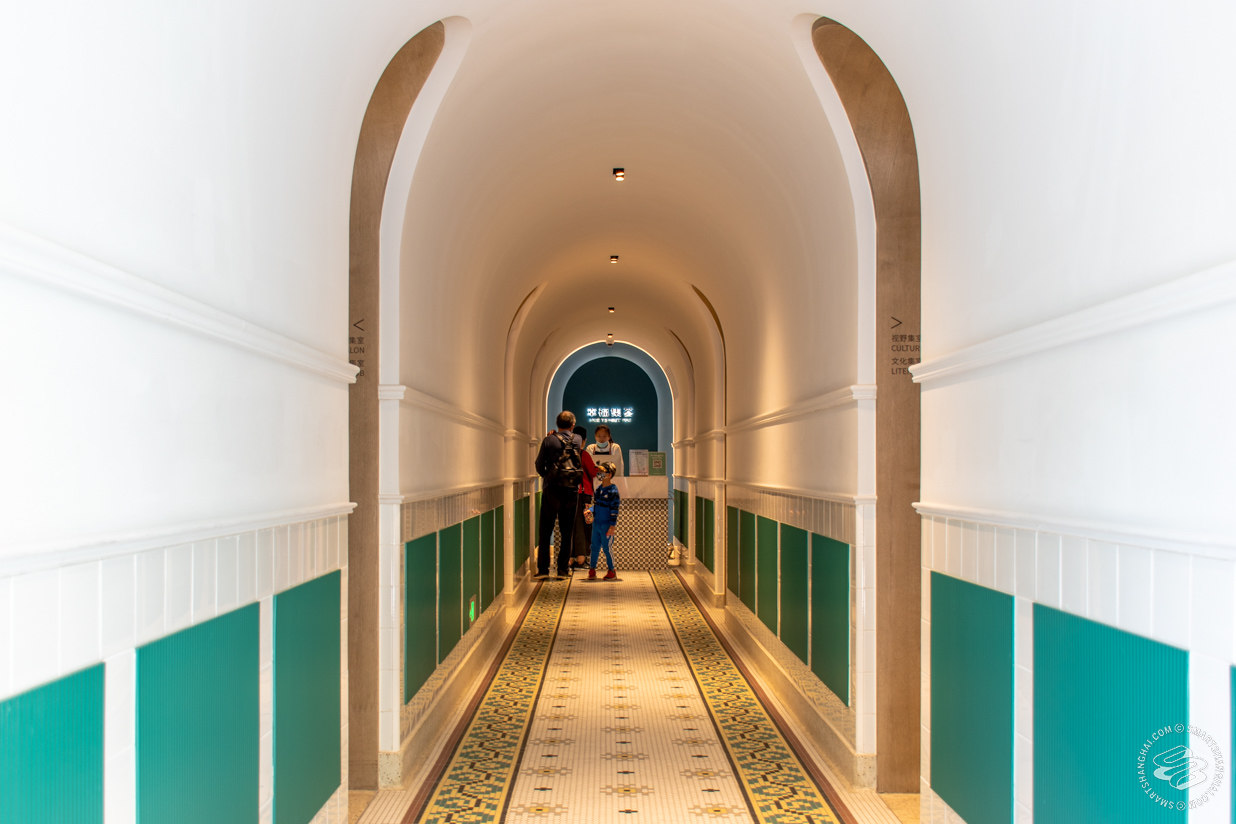 It's a stylish new bookstore laid out like a maze and carrying a wide range of both English and Chinese books, as well as music. We've written about it already: it is absolutely worth a visit for book nerds. 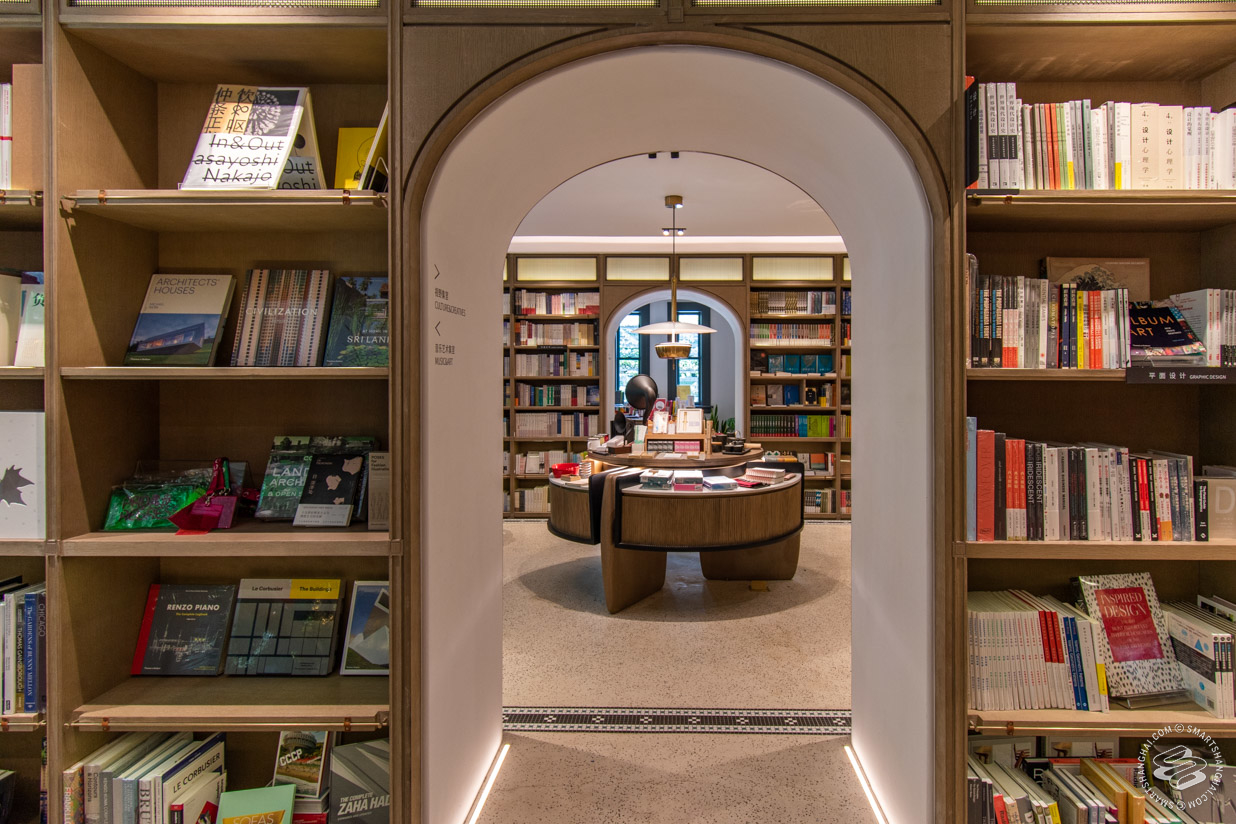 Connected to the bookstore and replacing the old swimming pool and gymnasium at the back of the Apartments is Drops Cafe. A wide-open, low-ceilinged coffeeshop with tiered seating and plenty of chairs and tables around a central counter. The coffee's decent, the space is nice, and it's jam-packed with influencers. 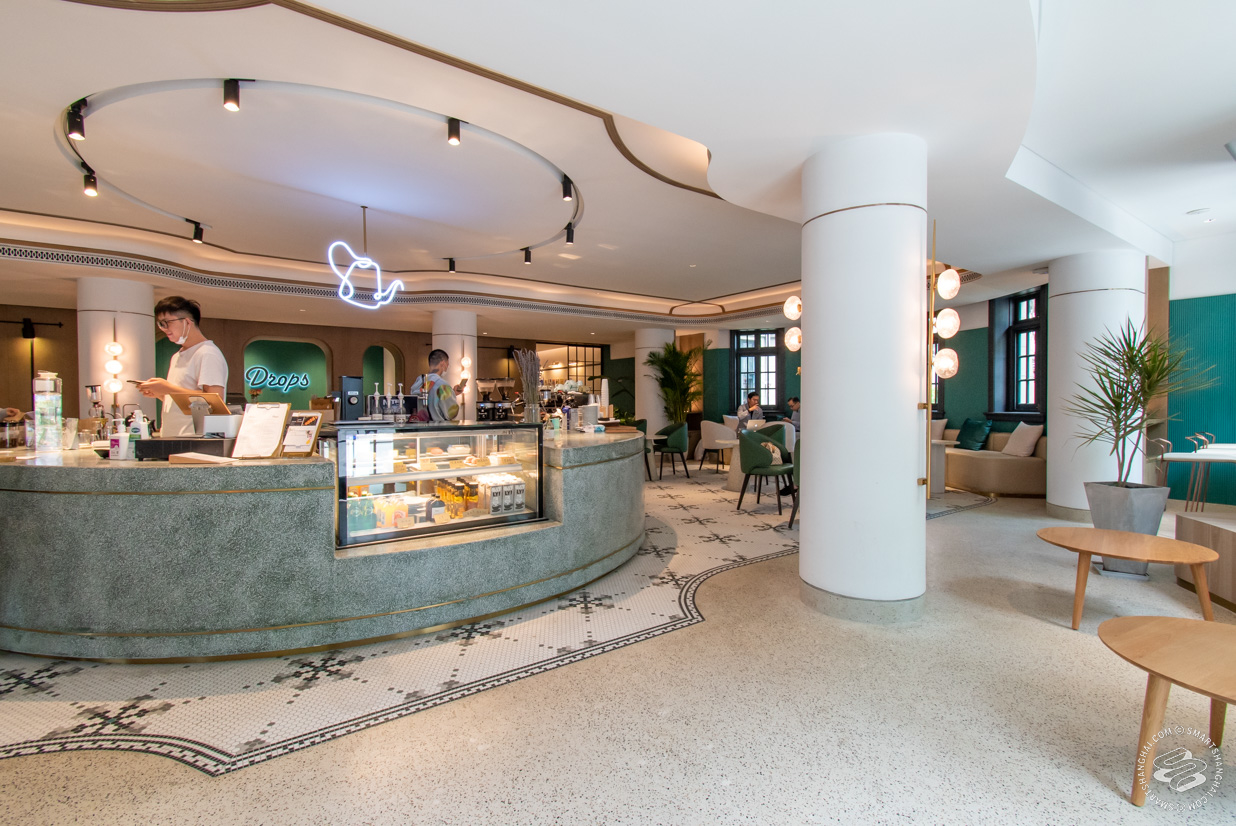 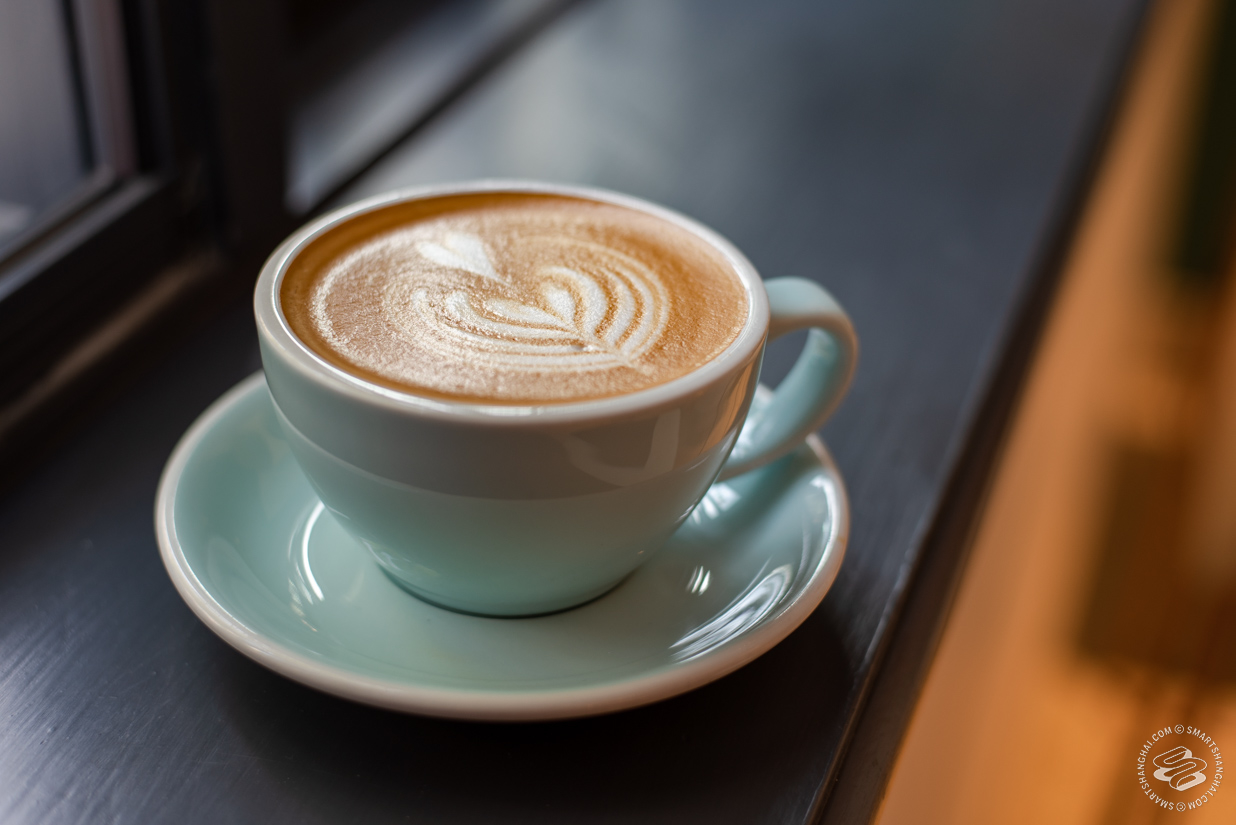 The Complex Behind It 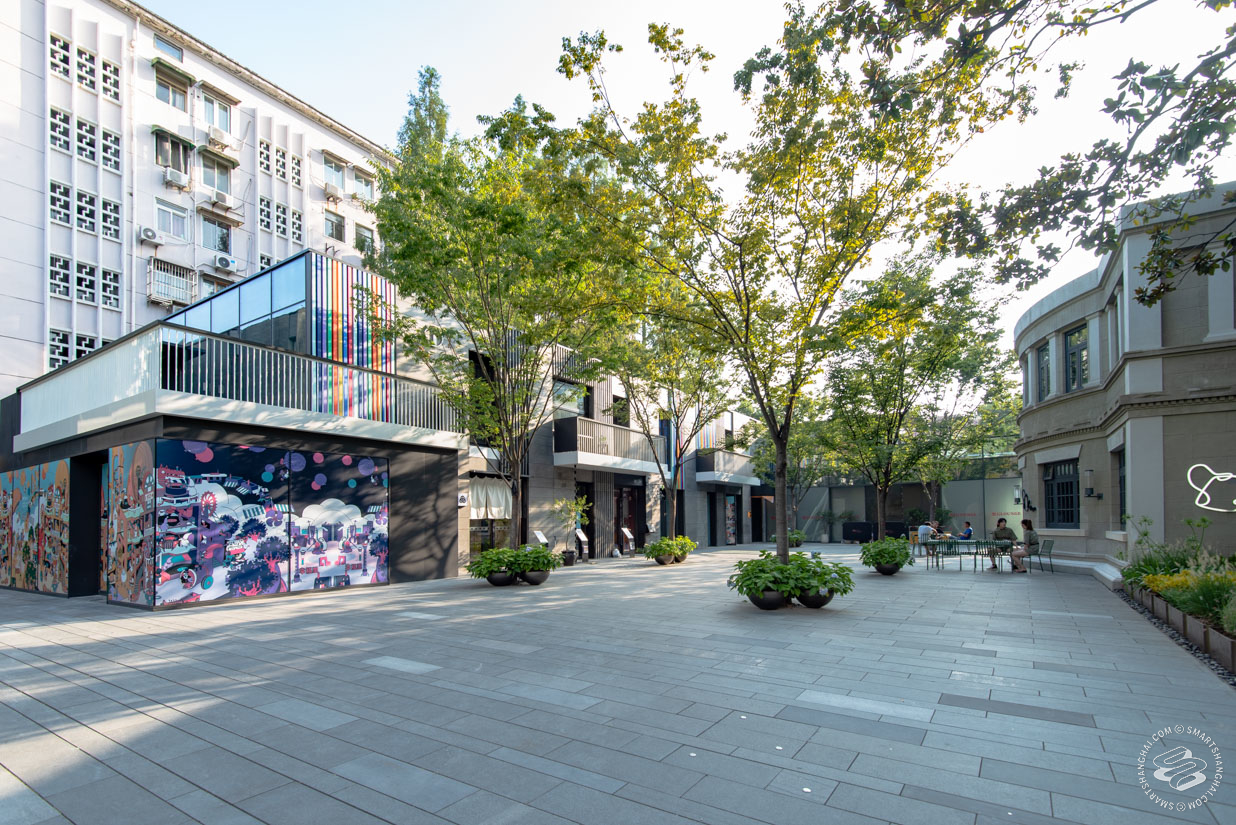 The most imposing building apart from the Apartments itself is the new M+ Hotel, a 24-room independent boutique hotel that just opened up. M+, which references something about "music," was explained to us as a hotel lovingly hand-crafted for the hundreds of foreign musicians that the SSO brings in every year. The interior's very nice: loving tributes to Art Deco stylings and the Blackstone Apartments themselves, each floor sporting its own tile mosaic pattern, without being gaudy. Homey and urbane. We're told that the conductor of the SSO is already a huge fan, but the timing of the hotel is a little unfortunate: some estimates suggest China won't see that influx of foreign performers back until late next year. 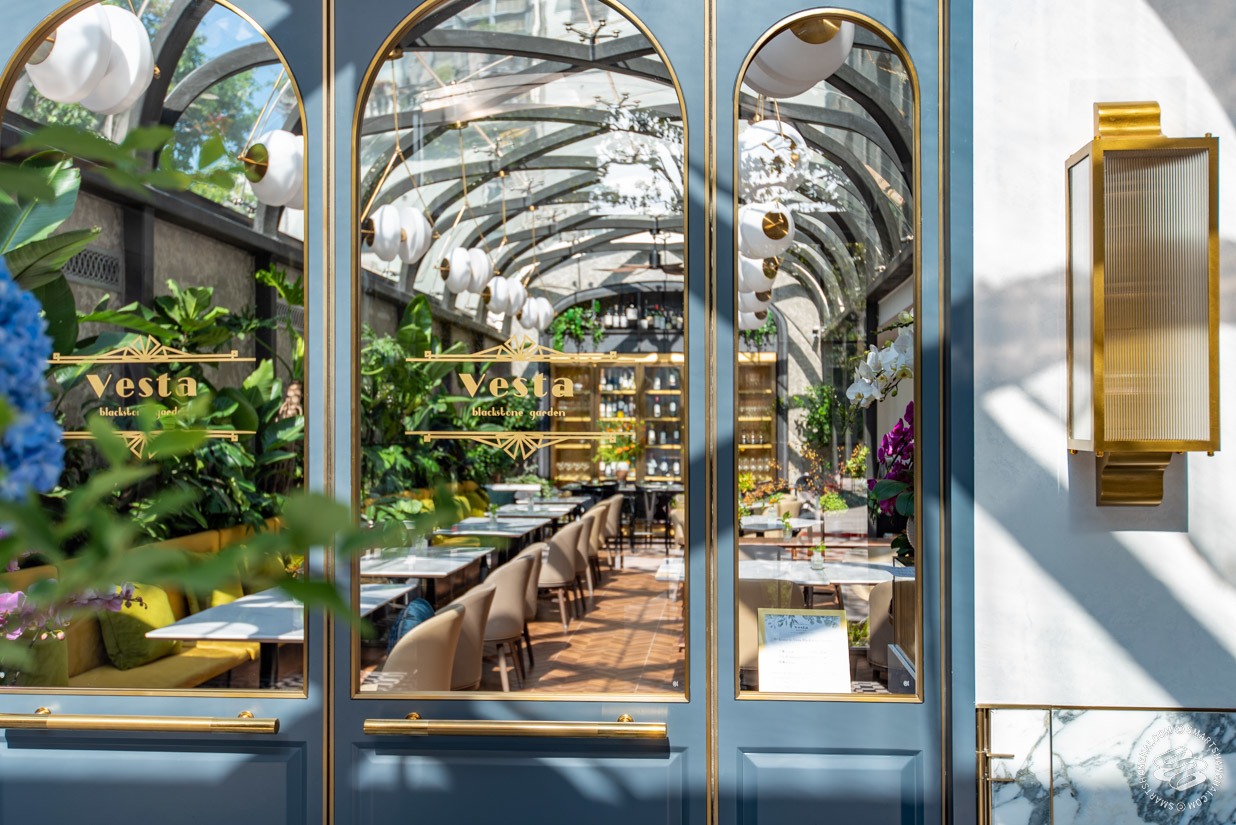 Vesta has taken a space on the ground floor for their second restaurant, after the success of the original at Jing’an Kerry Center. The owner here is Karen Chen, who also runs Shanghainese favorite Jianguo 328 and Japanese sushi counter Machiya, among others. 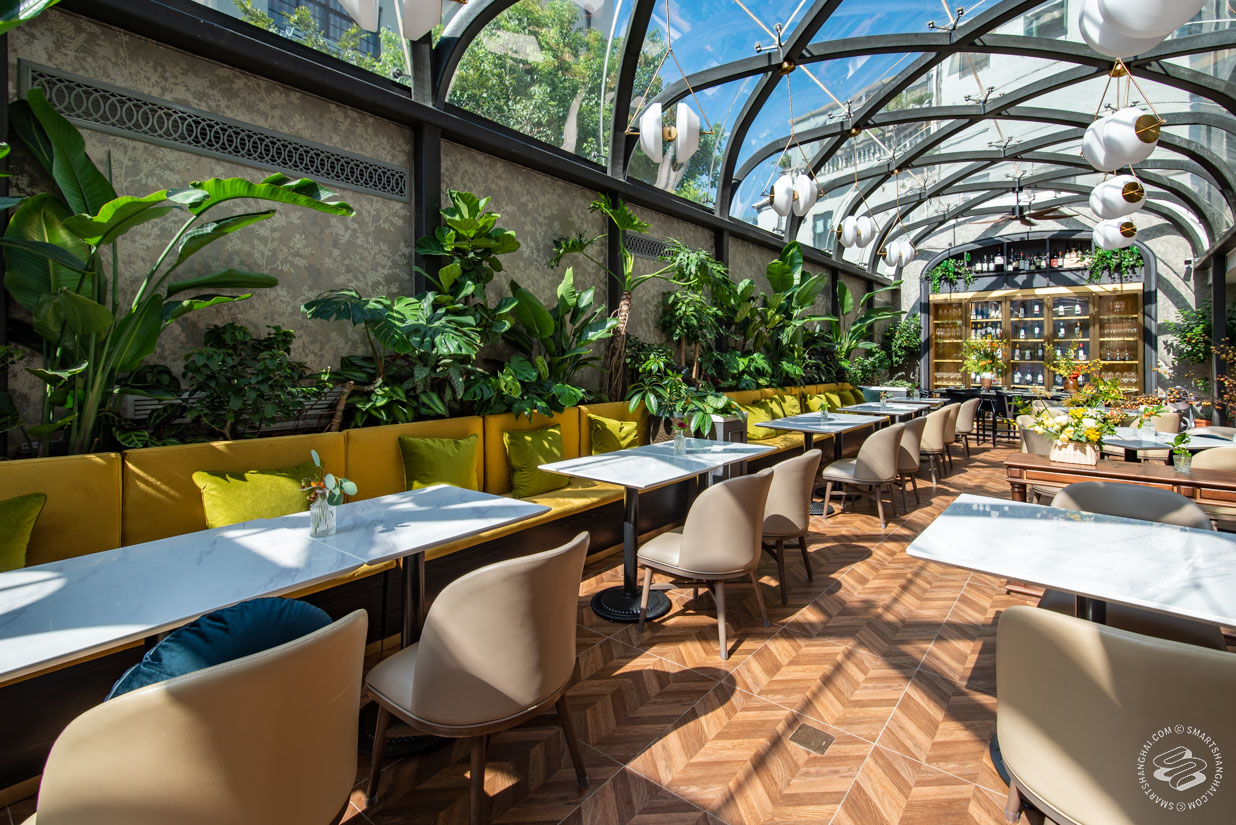 The menu is western and Asian, all small bites, with their "thing" being a beer-can chicken brined in beer and roasted vertically, sitting on the can, sort of. In just one column of the menu, you’ve got Karaage-fried chicken, capsicum hummus and laffa bread, escargots a la Bourgone, pork belly wrapped asparagus, a chicken quesadilla, and teriyaki chicken wings. If you can’t find something that appeals to you here, you’re probably just being difficult. Across the courtyard is a small shop affiliated with M+, He Wei Zhi Guo dedicated to Japanese "wagashi" desserts — delicate little things made from rice flour and filled with sweet bean paste. It seems more like a space for workshops teaching both classic and contemporary versions of the treat. 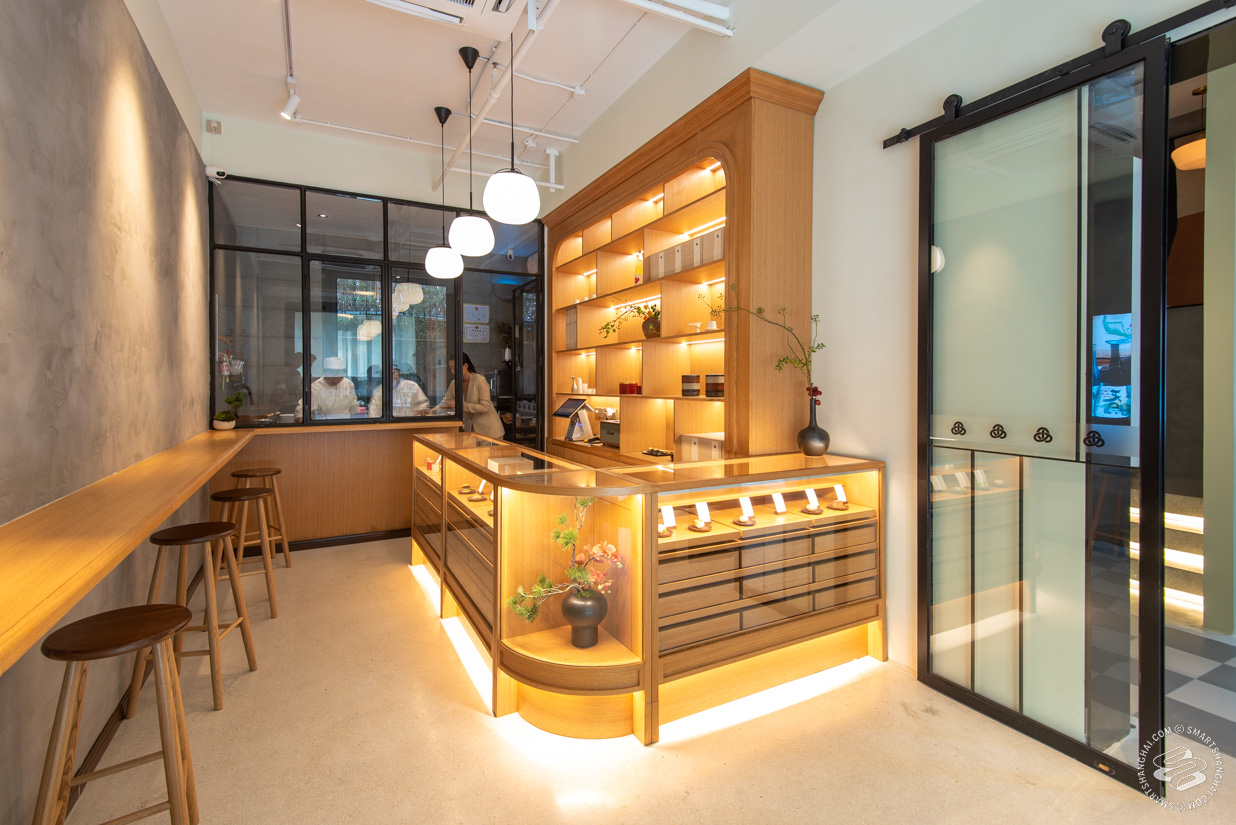 Upstairs from that and continuing the musical theme of the M+ crew is 12 Bar Blues, a compact second-floor bar run by Tammy Liu, the winner of 2019's Lady Amarena cocktail competition. The drinks menu, which starts at 88rmb and doesn't feature any perfume bottles, seems grounded and well thought-out. Cute little balcony overlooking the courtyard. A few bays down (the rest are still vacant) there's a third bar incoming called Blackstone. The owner seemed annoyed when asked if it was related to Blackstone Exchange. It's not. Bad luck. This two-story black and gold lounge bar has a terrace, for afternoon tea, we're told. It's not open yet. 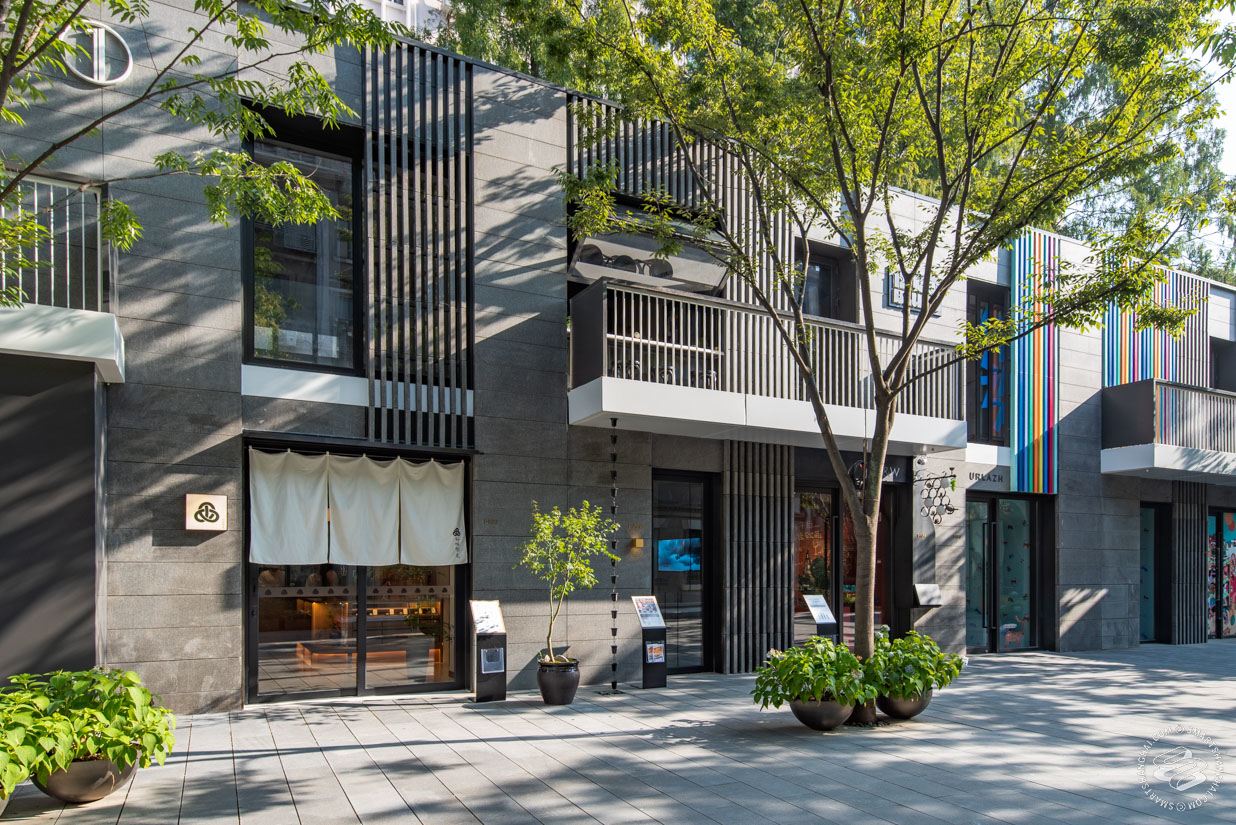 Tucked in the back corner of the complex, Casa Mia is having a second wave of fame, after relocating from its questionably legal situation waaaaaaay back behind the Donghu Hotel. It’s the same husband and wife team from Wenzhou by way of Italy, and there’s still no menu: the wife will tell you what’s on the menu that day but mostly it’s pastas (the crab tagliatelle is 98rmb and a perennial favorite), the roasted octopus leg is also 98rmb, and so is the porcini tagliatelle. The husband is in the kitchen. Overall the experience is super intimate and comfy, which is what made the original a cult favorite and pretty much the perfect date spot. 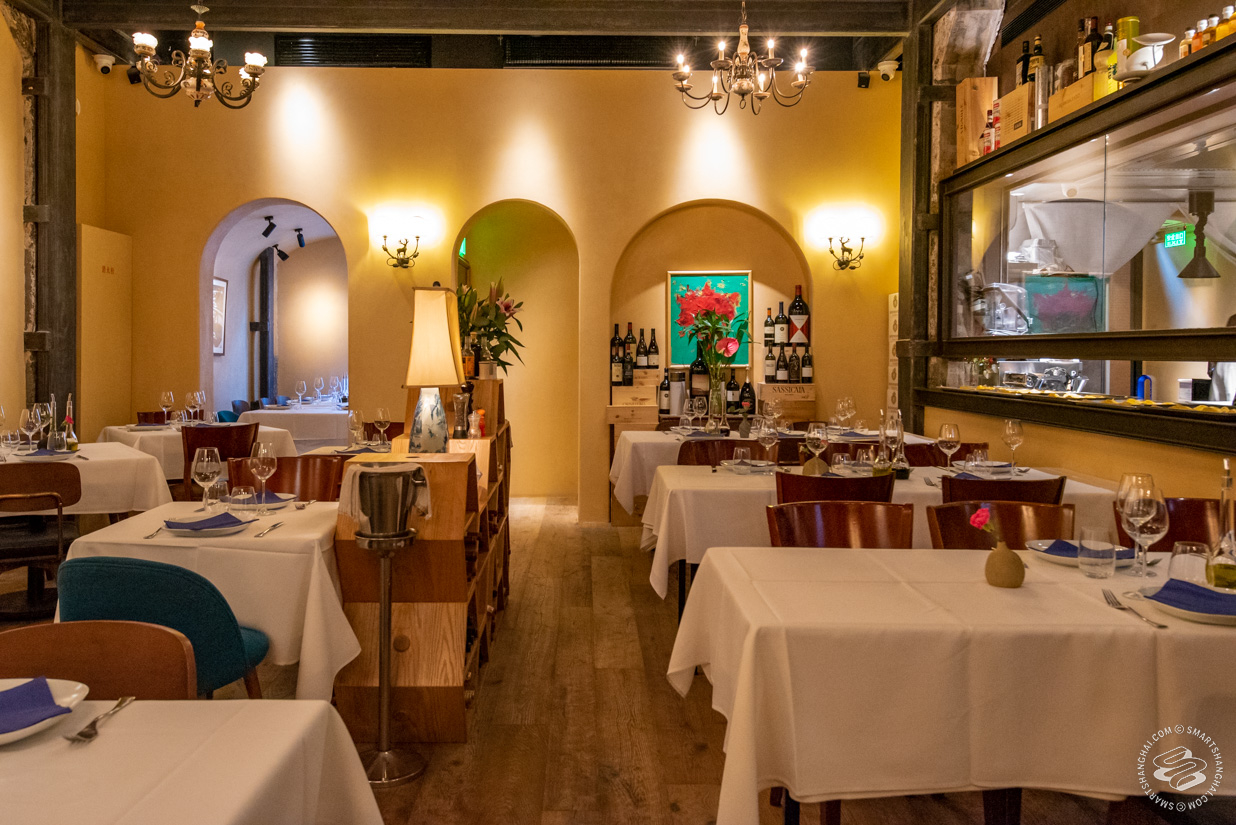 The drawback is that this one’s really hard to get a table at these days, with seemingly half of the Italian community flocking to it, along with most of the rest of Shanghai. Definitely, definitely make a reservation a few days in advance if you plan to go. Shanghai Bistro... Shanghai Bistro... to be honest, we haven’t eaten here yet. The food is unabashedly fusion and riddled with quotation marks, with things like Tofu "Bavarois" (walnut oil and Japanese soy sauce, 38rmb), Meatball "Lava" (traditional Cantonese sausage, minced pork, mozzarella, 88rmb) and an oyster "you dun zi", the classic Shanghai deep-fried brick of a radish cake (48rmb). Oh and there’s a 768rmb Shanghai Lobster Roll (Boston lobster, minced pork, mozzarella, broccoli) which you have to book in advance. The menu is literally a round piece of paper affixed to a vinyl record. This is either the most brilliant Shanghai fusion to ever be fused or it’s… well, it’s only fair to reserve judgement until we’ve actually been there. At least, we can call it bold. It’s bold. Bold-sounding menu. It’s already got almost 150 reviews on Dianping, so they are doing something right. 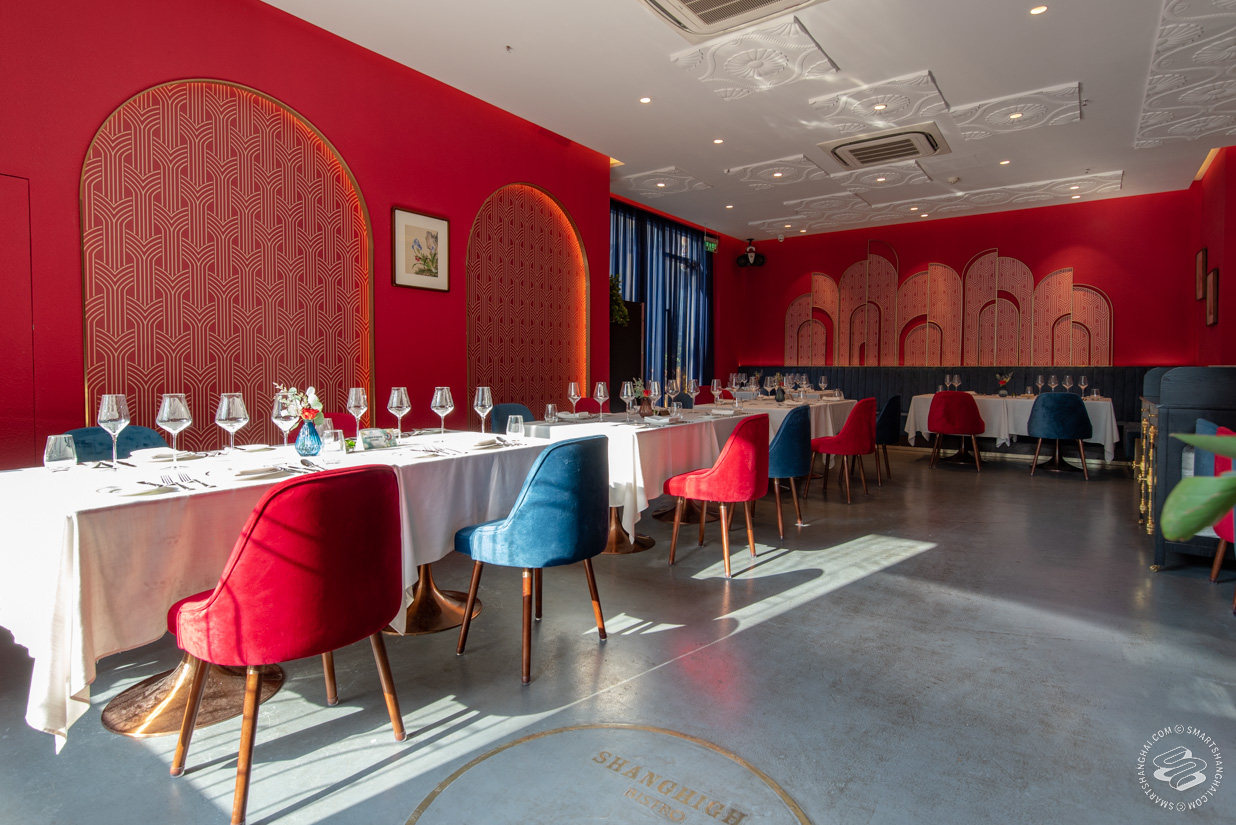 That's it for the major items. Just behind Shanghai Bistro, is a small alley that contains a suit-maker, what looks like a small art gallery, and Jiang Jiang Bao, which appears to be a burger joint. Haven't had a chance to try that either. Seems a little out-of-place considering how boutique-y everything in this new Blackstone Music Comprehensive Park is, but even classical musicians sometimes just want a burger, you know? 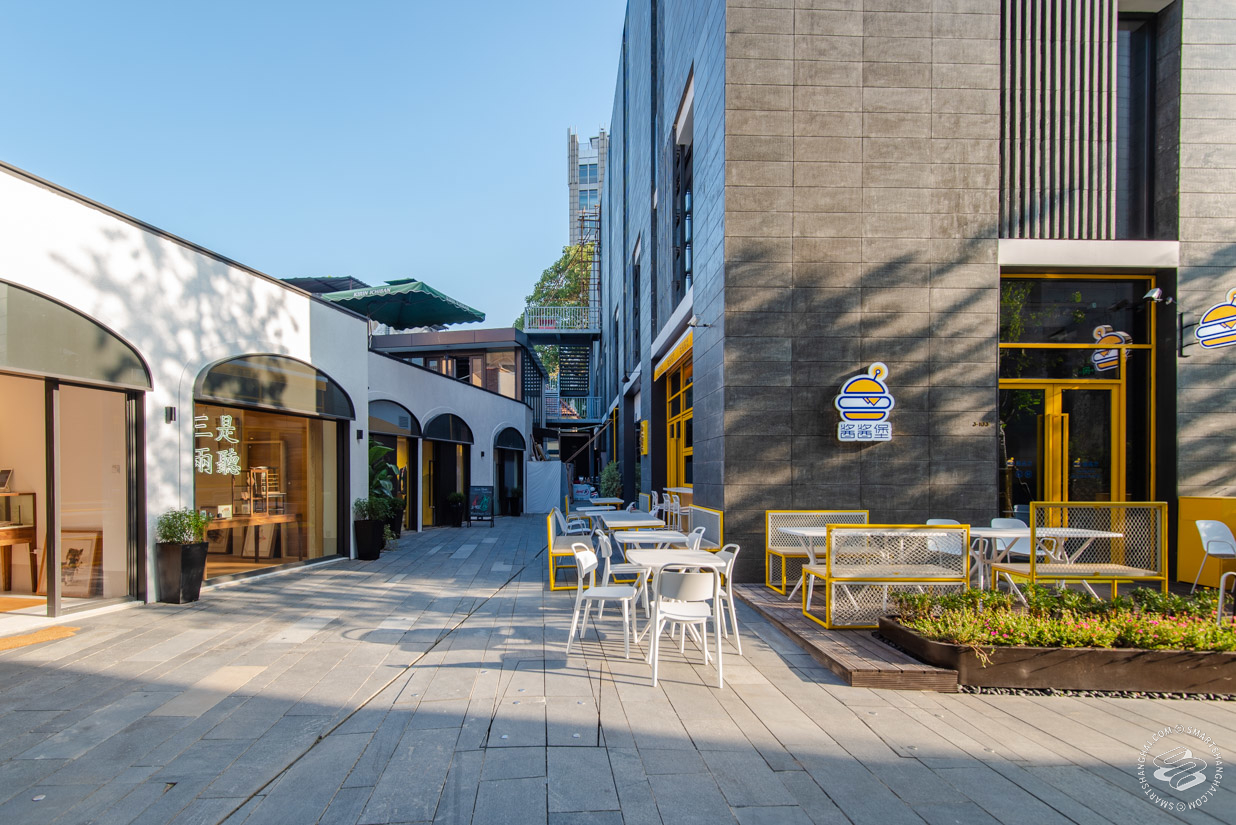 *
Blackstone Apartments, and the complex behind it, is at 1331 Fuxing Zhong Lu, near Fenyang Lu / 复兴中路1331号, 近汾阳路.