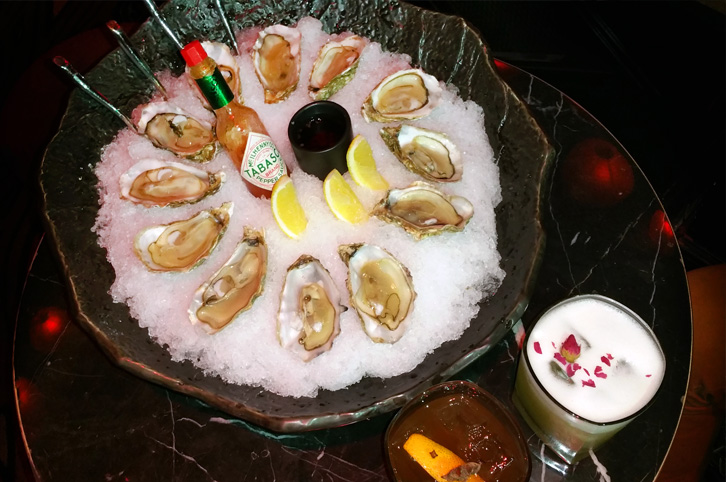 I don't know if you've noticed, but if there's one thing we love doing at SmartShanghai.com, it's reviewing famous, high profile French F&B institutions.

So let's talk about Le Baron's Wednesday Oyster Deal, shall we?

On Wednesday nights, Donghu Lu place-to-be-seen Le Baron is different. There's no casting agent at the door turning down eager college kids, banking interns, and fly-by-night socialites. There's no capacity crowd of punters inside dancing and drinking until the morning hours. In fact, there's no one at all really -- at 9pm anyway.

There is, however, a very decent deal on bivalves: a dozen Fine-de Claire oysters are 98rmb from 9pm-late.

The dance floor side of the club is closed off on Wednesdays, so you only get access to the lounge and the bar. That's just fine. With less people, it feels more intimate, refined, and less scattered. It doesn't feel like it might go off the rails at any second. I'm blanking on the music, but it wasn't EDM or Top 40 -- extra points for that. Later on, at around 11pm, patrons do start arriving but it never gets too busy. The tables fill quickly because you don't have to buy a bottle to get a seat.

You don't have to buy oysters either but lots of people do. They were sold out by 11.30pm.

The French oysters are a smaller variety, served with lemon wedges, Tabasco sauce, and mignonette sauce on a platter of ice. They smelled and tasted fresh. Completely adequate. If we were looking for one complaint, it's that they weren't severed from the bottom shell (seems to be a common problem in Shanghai). So instead of slurping, you end up doing an awkward motion of biting then pulling and scooping with a fork. But the mignonette sauce was good, and there's enough to lather it on if you can't handle the pure raw oyster taste.

If you want something a bit fancier on a Wednesday night, Le Baron's oysters deal is a fine choice. If you do go, arrive a bit earlier to get a table and the deal.