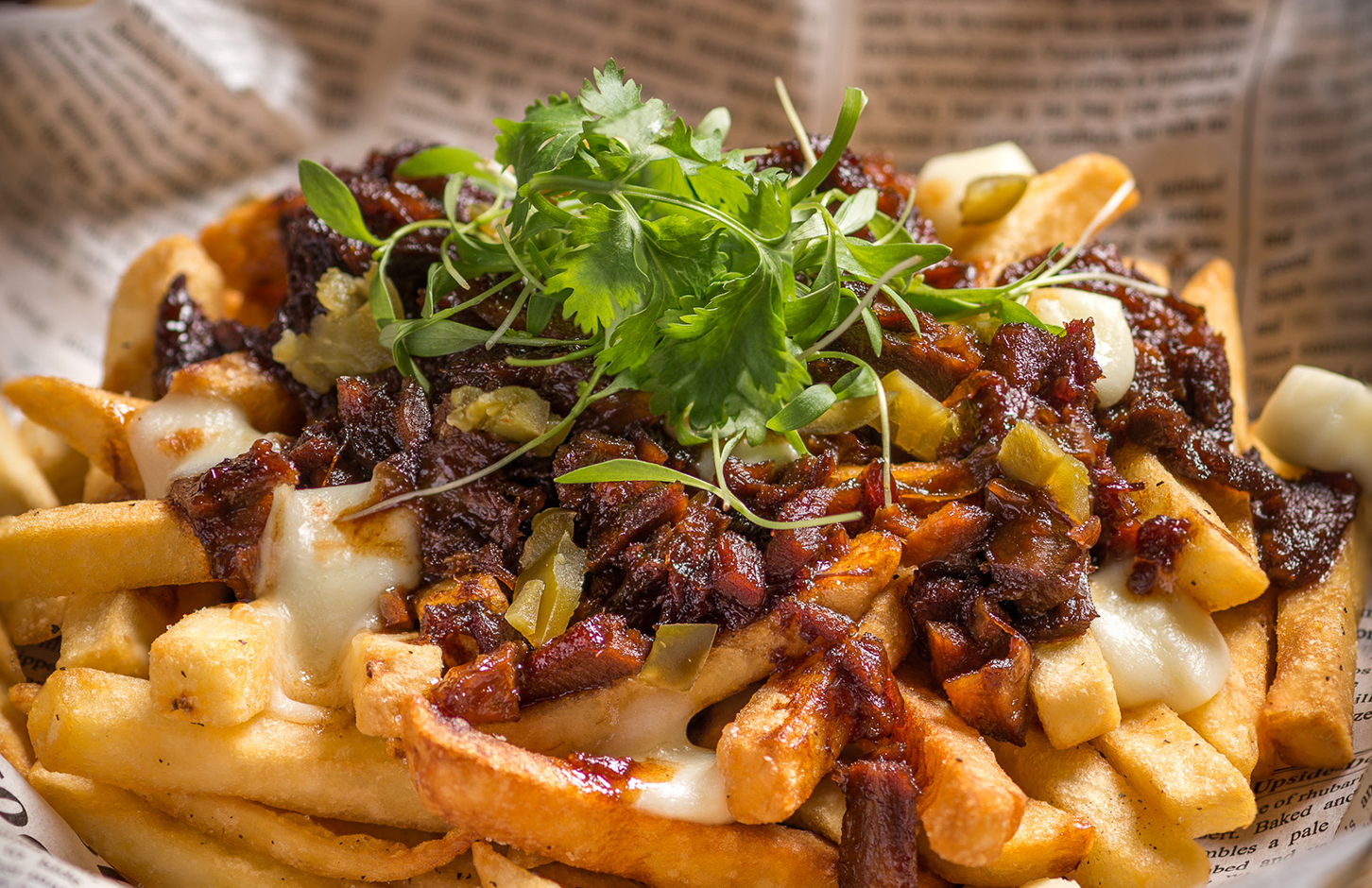 The Poutine Preview: Here’s What Shake’s Serving for their Poutine Pop-Up

By Morgan Short Mar 23, 2018 2018-03-23 Dining
This Saturday and Sunday night, dinner-plus-live music favorite Shake is hosting a Poutine Pop-Up with six variations on the Canadian classic, utilizing ingredients like Foie gras, beef tongue, hong shao rou, red curry chicken, and more. SmartShanghai tried that out just now as like a preview thing. We keep our sticks on the ice, Shanghai! Pitter patter, let’s get at ‘er!

This is a poutine: You eat it after consuming all of these: While listening to this: And wistfully recalling this: And after alllll that culture — after all that glorious, shimmering Canadian culture — when you barf it back up again it tastes like these: Thermal winter socks. I don’t know why. But it does. It's like barfing up a solid. A thick-gauge wool solid.

The basic poutine consists of three ingredients: French fries -- a thicker, crispy kind of French fry -- a light gravy sauce -- turkey or chicken gravy usually -- and cheese curds. There's a few accepted variations; an "Italian" version is pretty common in Canada. And everyone's got their own way to do the fries and gravy. But you need the curds. Which brings us to the one drawback of Shake's Poutine Pop-Up.

They don't have the curds.

That's a bummer, man. There's no denying that, buddy. That's a harsh buzz. No curds. They're just really hard to get in China, I guess? We've got like 9 million French and Italian cheese places around town but no damn curds? In friggin Canada, you can buy a friggin personal bag of friggin cheese curds at the local frigging Max's Milk, right at the friggin register. Just friggin street curds to shove in your friggin face, like a friggin champion!

All the same, I'm going to still throw my recommendation behind this poutine at Shake, and yeah I'll go ahead and speak for the Canadian government as well on the matter, and recommend it on their behalf. Look at this lil' bit of lovely. Shake's celebrated Chef Danyi is newly back from traveling to Quebec and she's brought a fistful of Franken-poutine recipes with her, using ingredients that would make my elderly Quebecois grandma's red wig zing off her head into the St. Laurence river. I tried the teriyaki one and the foie gras one. Both delicious. Heavy fuel and really satisfying. Speaking to curds purists, the amount of grease on these things is just right to get a good squeak going on with the diced mozzarella they're using, all the same. (You know about the squeak...) Prices are alright too considering the fancy-schmancy ingredients. 78rmb for one. 150rmb for three. Portions are fine too. I could pack away maybe two orders of these things before passing out on the couch with Trailer Park Boys blasting in the background.

A hong shao rou poutine! Boggles the mind. Canada: What a real melting pot of a country!

Shake's Poutine Pop-Up starts at 6pm on both Saturday and Sunday. This weekend, they've also got a new singer Courtney Knott kicking off her performance residency. Welcome to the movable feast, Ms. Knott.