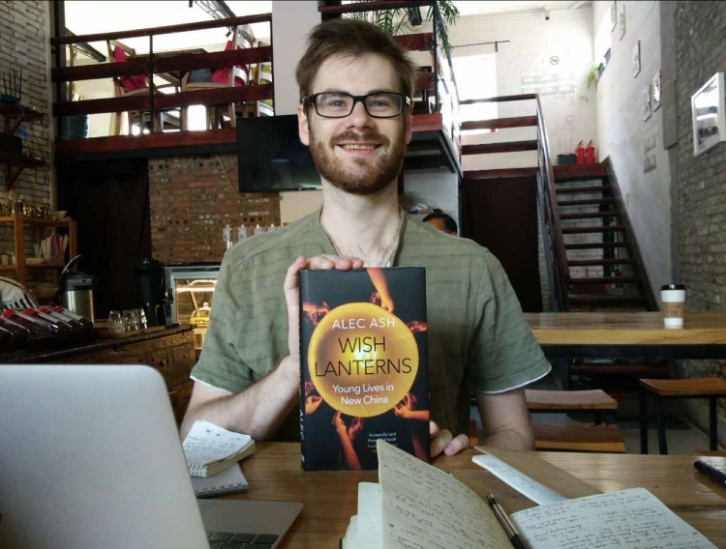 The Kids Are Alright: A Chat with Alec Ash, Author of “Wish Lanterns”

This Saturday, Glam Bar's "M Talks" series returns with Beijing-based writer Alec Ash launching his new book Wish Lanterns. Examining "Young Lives in New China", Wish Lanterns chronicles the lives of six new generation Chinese -- "a wannabe superstar, an internet gaming addict, the daughter of a Party official" (a jock, a nerd, a princess, a rebel) -- as they navigate modern life, love, work, and everything else in Beijing.

SmartShanghai met up with Alec in Beijing at our local bar -- he's actually my neighbor; he does Tai Chi on his roof, the shame of it all -- to talk about this new book, his other project, a creative writing website called The Anthill, the local barbershop scene, and how the kids in China... hey, they're doing fine.

Don't miss his talk on Saturday. Alec: I first came to China in the summer of 2007 to teach English in Qinghai province in Western China, in this Tibetan mountain village. I had just graduated with a degree in English Lit — yeah, I’m basically a walking China cliche. Came back in 2008 when the Olympics were going on. I did two years of Chinese study and then started writing…

I came to China because I didn’t have anything else to do. I didn’t know a single thing about the country. My first three months here were a series of escalating humiliations. I was in a bus crash between Xian and Qinghai. I was bitten by a bat in Sichuan. Trying to get a rabies vaccine with no Chinese, miming a flying bat to the doctors…

I think I felt I was so humiliated by China I had to come back and learn the language and try to understand something of this country that defeated me.

Alec: Yeah, it wasn’t that bad really. It wasn’t serious. But yes a guy from Pingan Insurance came, lined everyone up, gave us 50rmb and then drove off, leaving us at the side of the road.

Alec: But, yes, I came back in 2012 to write about the pace and I've been here since then.

Alec: Yes, alway non-fiction. I think I would be rubbish at fiction if I tried. It’s a different craft. I think there is a lot to learn from fiction — craft, structure, literary engineering — and thats something I’ve tried to bring into this book. It’s very engineered like a novel would be.

I think you can use a few tricks of fiction to bring a subject alive in a non-fiction format.

SmSh: Beijing has a larger professional community of writers and journalists — “China watchers” — do you feel part of a larger community of China cyphers, sort of filtering the place for Western audiences?

Alec: I think anyone who describes themselves as a “China watcher” is a little self-aggrandizing. We’re all here right, though, and interested in whats going on around us. I guess in that respect we’re part of the great circle jerk…

SmSh: Indeed. So, tell me about The Anthill.

Alec: Well, it’s just a platform for writers, younger writers, to publish their stories and experiences in China. A lot of times these things don’t really find a place to be published, disappearing into the bottom of a pint glass sort of thing. But now we’re a community of over 100 writers doing fiction, non-fiction, and poetry, and we’ve had a book published on Earnshaw Books called While We’re Here.

It started off as non-fiction stories, sort of experiences…

SmSh: It’s a lot of experiential stories, I guess? “White guy goes to barbershop”? Got any of those? The classic. A classic in the genre.

Alec:[Laughs.] We did publish one story to that effect. But yeah, we try to stay away from cliche as much as we can. I do think that everyone who lives here has some kind of story to tell…

SmSh: You mean you’ve got your own barbershop story to tell?

Alec:[Laughs.] Well, we can create one here tonight, Morgan. There’s three barbershops on this street within 50 meters.

SmSh: Three! I only know the two. Where’s the third?

Alec: So yeah, it started off as just trying to give people a place to publish. And Tom Pellman and Anthony Tao joined as editors as well.

Alec: It’s right down there! It’s just a middle aged woman sitting in a room looking at you.

SmSh: Yeah, it’s like a lonely blue room right. Like a lonely, lit up blue room. Did you see one of them has a hula hoop? And she just does her hula hoop in the shop when people pass by? It’s like a siren’s song.

Alec: Which one is that?

SmSh: Next to the primary school.

Alec: Yeah, the one that is very obvious. This is all gold right?

SmSh: Oh yeah, this is all going in. So, how did this book come about.

Alec: I started writing about Chinese people in 2008 and I kept a blog following six people who were my age at Peking University — some of my language partners, some people who I had met randomly around Beijing. And so I just started blogging their lives — what they were up to and what they were doing. I kept it rolling like an ongoing blog and that is pretty much the principle of Wish Lanterns. There are six characters who come from a variety of backgrounds. There’s Lucifer, who is an aspiring superstar — he’s pretty well-known in the Beijing music circles and he’s gone on TV a bunch of times.

Then there’s a fuerdai, rich, second generation kid, who’s family are Party officials. She’s cool. I use a pseudonym for her in the book, and that’s to protect her family. There’s a kid from the countryside, who’s English name is Snail — he gets addicted to World of Warcraft. And there’s a sort of fashionista hipster from Xinjiang.

SmSh: Do they interact at all?

Alec: Well, two of the people I write about end up meeting and getting married in a flash marriage but for the purposes of suspense I won’t spoil how that turns out…

SmSh: Spoiler alert, yeah. Do you appear in the book?

Alec: No, I’m not in it. I just think maybe I’m not very interesting. For an audience. I’m a white guy from a reasonably privileged background who came to China. And that’s pretty much it. Whereas the lives I’m writing about are interesting an unique to readers.

Sometimes you read books and it’s very heavy on the first person, and an author narrating their experiences — this are my observations of China, these is my China — and I feel like I’ve read it a lot and I deliberately didn't want to write that book. I just wanted to get the fuck out of the way. I didn’t want to be anyone’s guide, more trying to present these stories and let people experience them for themselves.

SmSh: Western audiences seems to be very much preoccupied with the politics of China and the politics individual people hold. How much do politics crop up in the book? I notice you’ve got the Square That Shall Not Be Named referenced in the second sentence on your book flap here.

Alec: Well, you’ve got to have that somewhere on your China book. Is it sentence two?

Alec: Politics — they’re there. There are in there. One of the characters was studying politics at university — the one that is second generation from the Party. She’s very thoughtful about politics. But what I’ve found to be more proportionately true is that politics and government don’t factor into the lives of this generation — and it’s not really a conscious choice. it just doesn’t come up. I wouldn't say anyone in this generation calls themselves political — quite the opposite really.

SmSh: How do you subjects feel about the book? Lucifer must love being in it.

Alec: Well, I tried to be very open with them about what I was doing and what I was writing, so they’re fine being a part of it. I’ve given Lucifer some copies and he’s selling them out of his cafe shop…

SmSh: Of course he is. Good for him. Lucifer’s great. How big does the city of Beijing figure into the book?

Alec: The characters are from all over China but they’ve all come to Beijing, and much of the story takes place here in Beijing. So the feel of the book is sort of Beijing. People who live here would recognize a few things. SmSh: I read in your Author’s Note that you were looking to tell “more nuanced stories of this generation”…

Alec: Yes, I am happy to spin out some cliches, and can do so for this interview as well.

Alec: So did you know that China is a country of contradictions? And I wanted to get under the skin of China, and look beyond the prevailing stereotypes.

SmSh: How was the process of getting it published? Are Western publishers interested in China stories?

Alec: I’m lucky to have found this publisher Picador, who I’ve followed all my life — their travel stuff and so on. As far as China stories, the shelf is indeed overflowing with books, but there still seems to be interest there. Especially for material that addresses the newer generations — the “new voice of China” stuff. Because it’s saying something new about the place…

Don’t ask me about Peter Hessler.

Alec: It’s been great. I’ve gotten some good reviews in FT and the British press. Just finished an interview with The New York Times.

SmSh: So what did you learn, writing the book?

Alec: I learned not to think of people as character types. I went into the book with the idea, here’s a group of people and each one of them represents a facet of young China. And I think I was schooled pretty quickly that that’s not how people are. They can have contradictions, they can be two different things at once or none of the above.

I think it’s fundamentally insulting to try to present people as representatives of anything other than themselves. And in the end people can make their own judgements on these individuals and young China.

SmSh: The kids are alright. Are the kids alright?

Alec: Yeah. The kids are doing fuckin’ great, man. One of the reasons I started writing the book is that I was pretty fed up with all these people, considerably older than we are, saying that the kids aren’t alright. Every is so down on young Chinese, saying that they’re spoiled and apathetic, both domestically and abroad. It’s always, they’re braindead, they’re apathetic, they’re materialistic, and that really got my bristles up when I was a student here in my 20s. It’s always the same old thing.

So I was hoping to counter that. I just think its a generation defined by their aspirations to live their own lives.

”Wish Lanterns” is available now at Garden Books in Shanghai. Alec is speaking on the book at the Shanghai launch this Saturday. Details here.