Previous Article
Kids, Hold on to Your Butts: Dora the Explorer and Peppa Pig Are in Town
Dagu Lu Gets Told You Can't Sit On The Terrace Anymore
Next Article
SmartShanghai 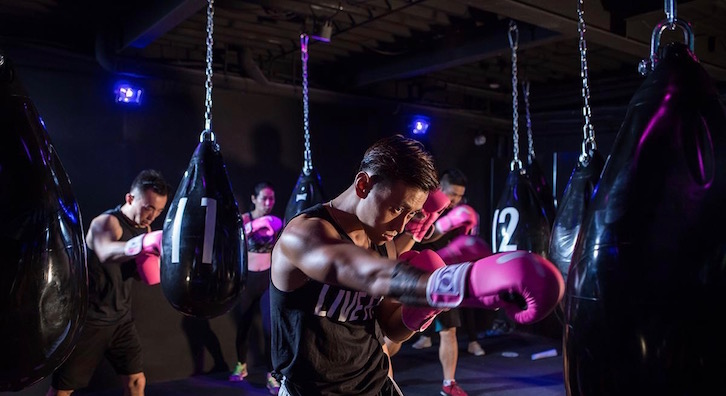 By Sarah Boorboor Jun 15, 2017 2017-06-15 Sports & Recreation
New cardio boxing gym, KO Basebody had its soft opening this Wednesday and it was a party. The concept for the gym is “fight club meets night club” and it’s exactly what it sounds like. Well. Not really "Fight Club" like a bunch of dudes punching each other in a basement to "feel alive" or whatever , but it's a boxing exercise class in the blue-dark pallet of a nightclub with a Top 40 rap-pop playlist, replete with strobe lights flashing during the “push yourself” parts of class. It’s... less stroke-inducing than it sounds. Read on for details. The class is split into two sections in the same room, half of us do cardio boxing while the other half does plyometrics (using step platforms and free weights). We stay on each side for less than ten minutes then switch, every time we switch we do a different set of reps. KO might eventually incorporate kickboxing, but for now it’s just boxing (left hook, right hook, uppercut, etc.) which is good for beginners. The class was led by an instructor who demonstrated everything for both groups, explaining first in Chinese then in English. He wasn't exactly the Clint Eastwood to my Hilary Swank, but I guess old Clint wouldn’t go to a night-club-fight-club. Looks... like a nightclub right? (It's sort of purple. That's pretty much the basic principle.)

Wednesday didn’t have a full class, but it was still a bit cramped. In addition to spreading out a bit, KO might wanna look into getting two instructors to facilitate the two sections of class, but to his credit our instructor did manage to keep it moving. The whole class lasts 50 minutes, and the constant switching keeps the class engaging. Also shout-out to whoever made the playlist, which was current (included songs off Kendrick's new album, hey) and really did give the workout a "party" feel. At the end I wanted the class to keep going, which I usually don't even say about parties. For now KO has a got a special going on: buy one class (160rmb) and get one free. Just be aware, the free pass expires in two weeks, so use it or lose it. For now, they are not offering memberships for this kind of class, just pay as you go type thing.

Stuff You Should Know

First rule of Fight Club Night Club, be on time, you won’t be able to enter the class 5 minutes after it starts. Right now the class runs at 6.30pm daily, but they are still testing out the schedule, so it's subject to change. You can bring your own gloves, or use their gloves—if you use theirs you have to purchase your own hand wraps that cost 20rmb.

To book a class you can call ahead or follow their official WeChat: BaseBody.