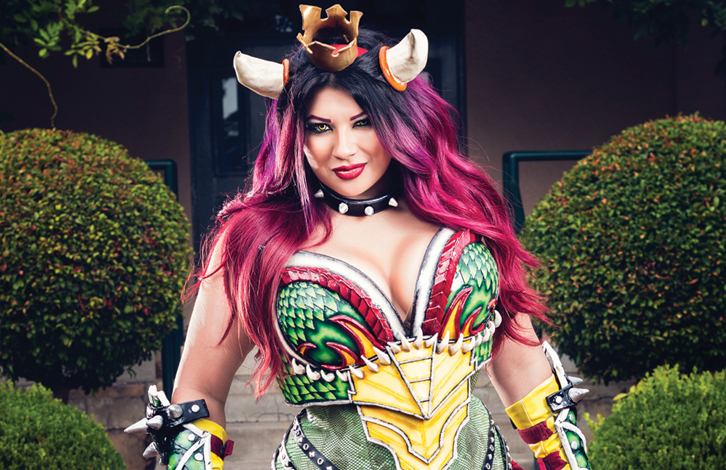 A Cosplayer, A Corset-Maker and Boba Fett Walk Into a Con

By SmSh Oct 5, 2017 2017-10-05 Community
Day 1 of Shanghai Comic Con 2017 has just wrapped up. The cosplayers, artists, merchandise collectors and neeeeeerds are out in force. We caught up with pro cosplayer Ivy Doomkitty, costume designer/corseteer Lauren Matesic and head of China's branch of the Star Wars fan collective, the 501st's Darthz. They’re three of the guest judges of the cosplay competition, so we bombarded them with questions about costumes, cosplay, #cospositive, corsets, all that good con stuff.

SmartShanghai: So, quick intro, who are you guys? Ivy Doomkitty: My name is Ivy Doomkitty and I am a professional cosplayer, model, designer, artist, gamer, advocate for body positivity, and advocate for cat rescue group Kitt Crusaders. I was also a Cosplay Judge for SyFy's Heroes of Cosplay and have judged ReedPOP's Crown Championships of Cosplay multiple times. I am based in Los Angeles. Darthz: I'm known as Darthz to my friends, I've been CO of the 501st Chinese Garrison since 2013. I was born and raised in Shanghai, started to love Star Wars since the age of 8. I would consider myself more of a props maker instead of a coser [cosplayer] as I don't really perform in hard armor. Basic thing we do is take photos with our outfits and be cool.

Ivy: I started going to conventions 13 years ago as a fan, collecting action figures, comic books, and meeting my favorite writers and artists. I fell in love with the idea of dressing up as your favorite comic book and video game characters but was afraid to do it because I didn't want to be ridiculed for my body type. I then had the honor of modeling for comic book artist Frank Cho for a few years, before deciding to cosplay. He helped change my perspective and inspired me to begin cosplaying. Since then, I've cosplayed countless characters that I love.

Darthz: I joined the 501st in 2011 using my Return of the Jedi version of the Boba Fett costume (a 2-year build). For how I started all of that, back in 2010, I got to know these three guys who were building their own stormtrooper armor on China's 501st BBS forum. In 2010, we had 3 members, this year we have 77 members all across China. Majority of them are in Shanghai and Beijing. SmSh: Ivy, tell us a little about this #cospositive hashtag we're seeing more of. What's it about?

Ivy: Interestingly enough, I was one of the first professional cosplayers who used the #cospositive hashtag and actively use it. Cospositive and body positivity are very much things that go hand in hand. My entire brand is built upon my belief that anyone can cosplay, regardless of age, gender, body type/size, skin color, etc. To me, it means accepting others and being part of something bigger. It's being a part of a movement and force meant to show the positive side of the community and to embrace those that may be afraid to cosplay and show them that they can also have a positive experience.

SmSh: Lauren! Corsets! We hear you're a bit of an expert on them. Tell us about corsets.

Lauren: Corsets play a MAJOR role in the cosplay community for a multitude of reasons. For one, most comic book and anime characters aren't drawn with realistic body proportions... For instance, no one in real life has the proportions of Jessica Rabbit, but if you cinch up your waist and wear a pushup bra you’ll be a little closer to the ideal. Also, because corsets are so sexy, a lot of artists use them as a design element when drawing their costumes. Another element that plays a big role in the use of corsets in cosplay is GRAVITY! When there are very large bosoms on the lady characters, they're always drawn very perky, but that's not how gravity works. Corsets can help with gravity-defying costuming! Darthz: We have comparatively less communication with other groups of cosers. However we know through some of our friends that the cosers in China are very talented, I have seen photos of their work and performance on previous SHCC, they are amazing. I know it is definitely growing as I have seen my members getting into it somehow as Batman, Antman, Ghostbusters, Spiderman etc., not to mention I, myself, am also a decent Batman.

SmSh: As judges, what do you look for in best-in-class tippy-top cosplay?

Darthz: Fitting is number 1, which directly interprets how well the coser understands this character. Sometimes it doesn't really matter what kind of expensive material is used, or how gorgeous the costume looks by itself. It has to be on a person, and the audience decides, "Wow, that is him or her (the character)." Lastly, we will need to see how the performance is on the stage. This is something we 501sters cannot say a lot about it. 501st is quite unique, we very much lack the element of performance. We learned stuff like dancing to MJ's Thriller and Smooth Criminal in armor for charity events, but that is really very rare.

Lauren: For me, the best cosplays consist of impeccable tailoring and construction. I'm not one to make big showstoppers with lights and armor builds, but as a professional costume designer, I always appreciate a really well-made and constructed garment. I'm always looking at the pattern work and seam placement as well as minute details like lining and embroidery.

Ivy: I look for attention to detail and that the character matches the design. I love seeing various techniques used in a costume as well as various textures and materials. It really makes a costume pop. I also look at how clean the final costume is (are there loose threads, is it pressed, is armor sealed and painted, etc). When judging a competition of the caliber of ReedPOP's Shanghai Comic Con, I also flip seams and make sure the underside of the costume is as complete and neat as the exterior.

I feel it's also important to see the confidence in the cosplayer. I want to see them own that character and make me believe that they are that character. Nothing is more exciting than to see a cosplayer excited to show their work and show pride in it. At the end of the day, it's about having fun with cosplay, creating memories, and enjoying the craft. SmSh: So what're you wearing to the con?

Lauren: Ivy and I have some new X-Men costumes in store for Shanghai Comic Con as well as a DC Comics duo! We're really excited to debut some new looks.

Darthz: For this SHCCon, I might be in a cool shiny TIE Pilot from the Force Awakens. I just had it made and I need to test and fit it at the comic-con.

Shanghai Comic Con 2017 is on from October 5-7 at Shanghai World Expo Exhibition & Convention Center. Pre-sale tickets are closed, but you can still get day passes at the gate.