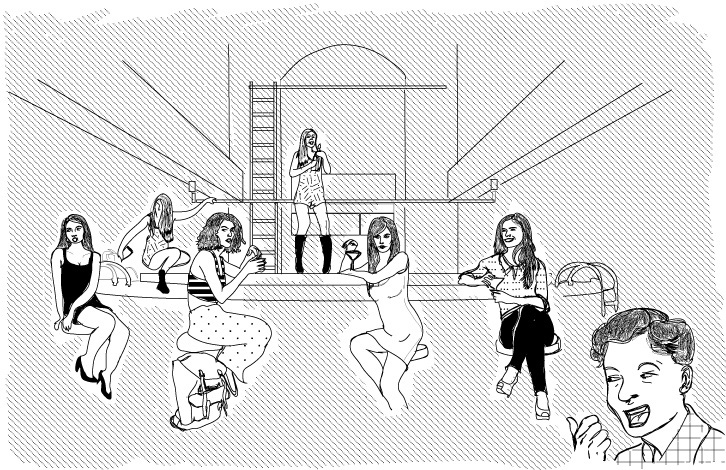 By Rebekah Wilens Jul 2, 2015 2015-07-02 Nightlife
Who still goes to Zapata's? After 11 years, Shanghai's first Mexican restaurant with the self-proclaimed "original ladies night" is still packing them in every Wednesday for free flow margaritas from 9pm-midnight. Despite a long standing reputation for creepy old lurkers and lazy–eyed women of the night, Zapata's has managed to clean up a little and stay relevant, owed mostly to the garden. With more outdoor tables, strung up lights, and sweet shisha smells, turns out people actually go to enjoy the "atmosphere". Really. Here's a rough quote from a table of very decent looking expat women:

"It has a great atmosphere, especially the garden. We just came after work and dressed like this, [casually], to enjoy a drink outside. And it's fun to dance inside too if you want."

Really. If you'd told me in 2008 that put-together professional women were going to enjoy an after work drink at Zapata's, I would've tried to have sex with you in the park on Wulumuqi and Dongping, then thrown up margarita mix and Ajisen noodles on your shoes. Because that's what was going on at Zapata's in 2008.

To find out what it's all about in 2015, I rounded up some laydeez to see if in our late 20s, we could still fit in on the dance floor. We arrived at around 9pm, a little too early for dancing but in time to throw back lime-flavored gasoline without having to wait. We were joined inside by backpackers ("We DGAF hard"), exchange students ("Help me, I'm poor"), and insecure basics sucking in their stomach as they fiddled with the elastic on their body skirts. With only us four tiny clumps of girls inside, the staff moved everyone off the tables to force a more crowded looking bar, pointing to "Reserved" signs.

It's okay Zapata's, we know nobody is reserving tables here.

We weaved in and out of the empty dance floor and the crowded garden. The after work vibe had clearly started early, but stayed strong while exchange students started filtering in at around 9.30pm, wobbling in heels on the cobblestone. Even after seeing tables full of reasonable professionals enjoying their night, it's still beyond me why anyone chooses this place. Shanghai has plenty of beautiful outdoor seating options that actually serve half decent food and drinks with just as casual an atmosphere. The nachos were 55rmb, came with a coin sized drop of cheese, sad beans, and the taste of nothing. I focused on jalapeños for some semblance of flavor but only got a waft of pickle in my mouth.

Women, regardless of age, and when sober, are infused with a natural sense of stranger danger, unless the stranger has a "one of us" look. In the name of research, I approached the basics and found their insecurity contagious. Are they going to think I'm creepy? Do I look young enough for them to consider me a peer? Am I dressed like a nerd? "Hey, omg I love that skirt! I'm soooooo sorry to interrupt, can I ask why you guys came to Zapata's tonight?" I threw in some flailing millennial slang, "Is this like, a good jump off for the night?" Did I use "jump off" right? Hair was flipped, shoulders turned toward me, smiling teeth flashed. I'm in.

They said it's a good place for dancing and free drinks. Could the formula be so simple? A quick chat with the DJ confirmed:

I felt myself falling victim, unconsciously bobbing my head and singing along to power female pop anthems. It's a crafted trap -- once you're in those padded doors, drinks so available and music so inherently enjoyable, despite all logic it's hard to leave. There's a sense of responsibility to guzzle drinks that taste like the dignity that died in a Cancun back alley. They're there; they're free. I actually tried to leave before 11.30pm but Waka Waka came on and I had to do the Shakira dance. I had to.

And the lurker dudes? They're still there in all forms: awkward locals, old expats, tourist randos who heard it was a good place to pick up women. But they're harmless enough and easy to work around. By 11pm, there was a large enough crowd dancing, but males easily outnumbered females, lined up on the edges watching girls' bodies light up as their jam came on.

The morning after came with a very distinct feeling. Shivering sweats and a roiling gut. Again, why are people drinking here? Voluntarily? For alcohol that incites such distinct flashbacks of when one could only afford the 4rmb FamilyMart baijiu?

Looking around at the odd mix of people genuinely enjoying their time, I saw the third factor of the equation -- Zapata's is pretension free. They dance how they want. Who gives a fuck about what those creeps think?

If you want to feel like somebody at a Wednesday ladies night, you'll go to something like The Cut. Well dressed women, sipping rosé that they earned after a hard day of marketing experiential lifestyle products, eyeing each other down, because women are awful and if you're not "one of us", you are the competition. If you want to feel like nobody, who cares about nothing but how good dancing to Queen Bey feels, you'll go to Zapata's.