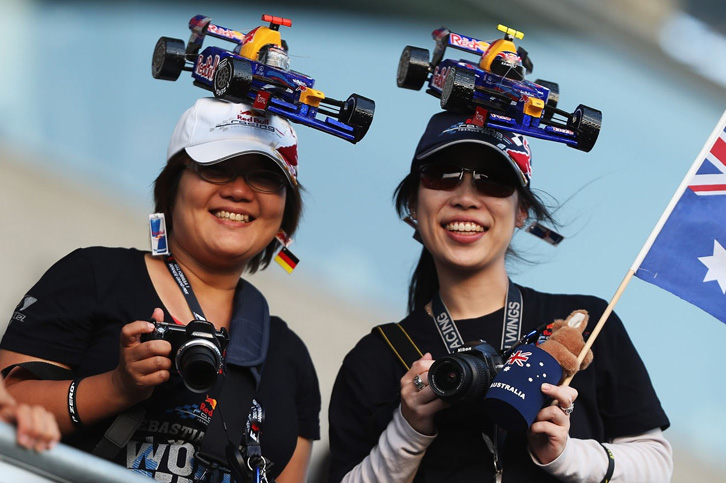 By SmSh Apr 12, 2016 2016-04-12 Sports & Recreation
This weekend's the big Shanghai Formula 1 race, and it's already sold out on SmartTicket and everywhere else that we've seen. You might have luck in the grey market but no guarantees, of course.

Anyway, ticket holders, here's a small FAQ to get you ready for the weekend. So, broad strokes, what's happening each day and when?

The qualifying is on Saturday and the big race is on Sunday. It starts at 12pm each day.

How do I get there?

Line 11 is your best bet, as there might be a lot of traffic on the highway. You gotta be thinking that several thousand people are all descending on the same place at the same time. Get off at the Shanghai International Circuit station. You're looking at a travel time of around 90 minutes from most places in the city, so leave early.

Can I bring food and drinks? What's the F&B situation?

Officially, Formula 1 does not allow people to bring their own food and drinks passed the gate but enforcement was fairly lax in past years. No guarantees though. The F&B offerings on site are not stellar. Think third tier local music festival fodder with long lines to get it.

How loud is the race?

Not as loud as back in the day when cars had naturally aspirated V12s but still loud enough to consider bringing earplugs. Back in 2014, F1 cars started using 1.6-liter turbocharged V6s, a move that caused many to complain that the cars sounded weak. This year's cars might be 25% louder, due to changes in the exhaust system. Earplugs are cheap -- you can get basic ones at Watsons, and more well-made ones on Taobao or even at The Shelter.

A British driver named Lewis Hamilton. And then he most unfortunately sprayed one of the hostesses in the face with Champagne afterwards, causing much controversy. Ooof, party foul.

Hamilton also won the World Championship these last two years and another one in 2008. However, his Mercedes-Benz AMG Petronas teammate Nico Rosberg is currently in the lead, having won the first two races of the season.

Just yesterday, Hamilton was quoted as saying, "I'm in the best place I've ever been psychologically. There's very little, if anything at all, that can penetrate that."

Indeed. He's claiming nothing is going to penetrate his best psychological place. Do with that what you will.

How difficult is the Shanghai International Circuit?

Apparently, it's one of the tougher tracks in Formula 1. As Infinity Red Bull's driver Daniel Ricciardo put it, "The straight at the Shanghai International Circuit is super long which makes it pretty different compared to other tracks. Coming off that straight, you then have to brake for one of the tightest corners on the calendar -- you go from one of the highest speeds to the lowest."

Shanghai is such a dynamic city, isn't it!

Also, it's shaped like the character 上, as in 上海. That's pretty cool. Click here for the official breakdown on it. All the stats and info from the horse's mouth.

Where can I watch the race On TV?

If you've got basic cable, you can watch the race on CCTV5. If you're looking to go to a sports bar, The Camel and The Rooster Jing'an are showing the race live.

After the party it's the after-party?

Sorry, gold diggers, but times have changed and the racers and team bosses aren't really partying like they used to. Back in the day, when F1 first came to China, you could spot people like Michael Schumacher in restaurants around town during the week before the race. Hell, Adrian Sutil and Lewis Hamilton allegedly got into a fight at M1NT in 2011. But nowadays, the teams are so professional and press-conscious -- and just straight up TIRED -- that hardly any of them join these parties. It's just some engineers from the teams usually, but who knows.

Here's what we know. M1NT has traditionally hosted F1 events in the past and this year they're doing a five-course dinner from 6-11pm on Sunday, for 680rmb+10% per person. The party starts after the dinner.

Bar Rouge also has some "F1 Celebrations" on Friday, Saturday, and Sunday. Still waiting on some details for this one. We'll update you as soon as we can.