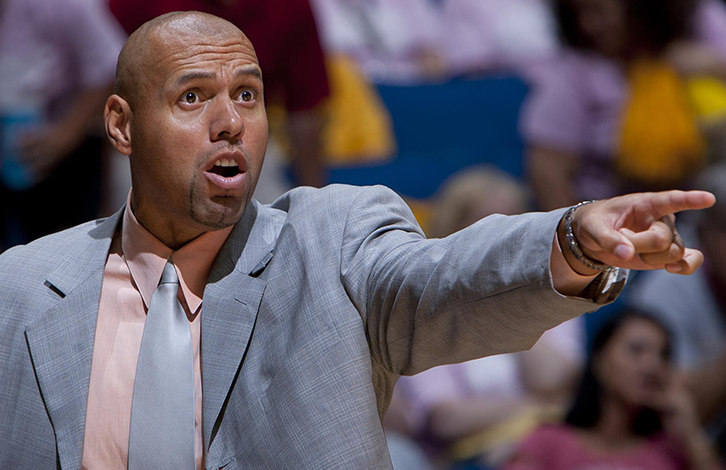 By Alex Panayotopoulos Nov 1, 2017 2017-11-01 Sports & Recreation
NBA name-about-town Tracy Murray's showing up in Shanghai this week. Let's reel off some achievements? Ex-UCLA Bruins, left as their #5 All Time Top-Scorer, spent 12 years in the NBA, ex-shooting-coach of the Lakers, he once scored 50 points in a game with Washington Wizards. Puts him up there on the Washington honor roll with the likes of Michael Jordan. We caught up with him on the phone as he was stuck in traffic on the way to the Chinese consulate. It was LA traffic, so we spent an easy 20 minutes chatting CBA, NBA, coaching the Lakers, the woes of big feet and Yeezys.

SmarShanghai: You played for the Lakers for a season in 2002-2003, what was it like being back as shooting coach?

Tracy Murray: Of course it was awesome coaching the Lakers. I grew up watching them as a kid. I played with them a year in the Shaq and Kobe years, and to be part of the coaching staff with a legend like [ex-head coach] Byron Scott, it was a pretty good experience. We've become good friends, he's a mentor of mine, he brought me in for that last year, and then they let us go at the end of the year. I wanted it to last a little bit longer, but that's just the way the NBA works sometimes. When they feel your time is up, then it's over. SmSh: Tell us about this trip to Shanghai, what do you hope to achieve with it?

Tracy Murray: There's a big game coming up on Nov 11, UCLA v. Georgia Tech and I'm the broadcaster, so the main reason I'm coming over is to warm the fans up. But I'm also coming out there to teach the game of basketball to some youngsters and meet some of my fans. I want to teach kids some fundamentals so they can improve their situation. When I'm in LA and I help my brother with his program, we do the same thing; we help kids get to college through basketball, so they can make it easier on their families. We're trying to build a relationship with China so that maybe kids [there] can do the same thing, go play at college-level in the US. You never know what's going to happen.

We brought two youth teams to Guanghzou 10 years ago to play against some local teams, build relationships, get to know each others' style. It was a great experience, most of them had never been out of their city. Basketball is a world game, and you try to open up as many doors as possible for talent. SmSh: What do you think of the CBA? You think there's anything the NBA can learn it?

Tracy Murray: It's competitive. About four years ago, I came over with a couple of street players like Doug Thomas, and we played a tour against some CBA teams and they're very good. Extremely fundamentally sound, they can slip and roll, they play extremely hard, and as you can see, there's a couple of guys from CBA who got into the NBA and played pretty well. Everyone knows about Yao [Ming].

The athletes in the NBA are taller and more athletic, I think that's the difference. You look over in the CBA and you see guys who are skilled. There're a few big guys who were already skilled when they came over, like Wang [Zhizhi]. He was one of the first seven foot one guys that could step out on the perimeter and shoot the basketball. Yao, as big as he was, he had a great touch, he could step out and knock down a jumpshot. So you have guys that are extremely fundamentally sound and are working on all parts of their game regardless of how tall they are.

SmSh: Do you think we'll start seeing more NBA players moving to play in the CBA?

Tracy Murray: I dunno, I just know that [Stephon] Marbury stayed over there for years and there had to be a reason why. I think he capitalized on his opportunity after the NBA to go over and play in the CBA and do well. It's another place where if things don't work out for people, it's another competitive league where you can come over and know you've got a chance to make a good living. SmSh: Think he bought a football team recently, you hear about that?

Tracy Murray: No, I didn't. [laughs] He made a nice living before he got there, and I guess he took it to another level when he went to China. He's done well for himself financially. SmSh: Don't know you if you know this, China loves it some sneakers. Mad sneakerheads. Sneakerheads as far as the eye can see. You much of a sneakerhead?

Tracy Murray: I wear a size 18. We don't get the cool shoes. We get the big clunkers that are heavy and don't look good. I think I'd be a bigger sneakerhead if I could wear some cool shoes. I heard the Yeezys are comfortable. When I was coaching Nick Young, he wore them in the game a couple times and people made comments, he said they're extremely comfortable. I dunno, I just think they're more of a fashion shoe than a basketball shoe. If they're that comfortable, I can't see them being durable enough to play basketball. But I wouldn't know, I'm the guy with the big feet that can't fit 'em.

Tracy Murray'll be in town from Nov 3 to Nov 8, including a showing at The Camel (Puxi) to support the Brother Hoops Charity.