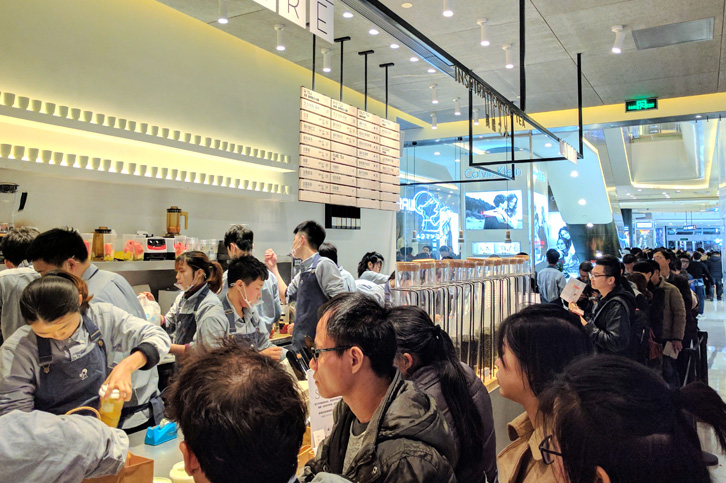 [Back of the Queue] : Guangdong's Cheese-Topped HEYTEA

I tried HeyTea, the self-proclaimed creators of the cheese-topped style tea, that requires you to get behind a five-hour line to obtain. Find out if it was worth the wait inside.

The venue: HEYTEA (喜茶) was branded as HEEKCAA in Guangdong, and formerly known as Royaltea (皇茶) before their popularity induced too many knockoffs the company had to change their name. The item: Jinfeng Tea King (金凤茶王) and Grapefruit Tea (满杯红柚) are among the most popular choices. They currently have twenty-one items on their menu, divided into the categories of H Tea (green tea, black tea, or pu-erh with whipped cheese-flavor cream on top), Mix Tea (like Oreo Shizuoka matcha), Pure Tea, Fruit Tea, and Milk Tea. Pricing is slightly higher than other chains, ranging from 18-29rmb. Also on the menu are two simple desserts: crème brûlée and chocolate brûlée for 9rmb.

The wait: On weekdays, the line is 5 hours long if you come before 8am, then it's another one-hour wait after you place an order. A little background info: HEYTEA is a Guangdong tea shop chain founded in 2012. At first, it was a 20sqm shop in a small alley in Jiangmen, the brainchild of a guy in his early twenties called Yunchen Nie. Now, it's a big chain operating over 50 branches in Guangdong. They are the self-proclaimed inventor of the original naigai cha (奶盖茶) -- a tea-based drink with 2-3cm thick creamy and salty milk foam on top. Remember bubble tea? That used to be a thing. And naigai cha is like the 2nd generation of bubble tea. It's usually made with real tea, paired with the mixture of naigai powder, whipped cream, and salt. Also highly-customized, in terms of sugar, fat, and ice.

Naigai cha has been semi-popular for a few years. It only became the latest fad in tea business when HEYTEA opened its first Shanghai chain in mid-February at Raffles City, across the street from another internet sensation Baoshifu. Many people (and huangniu) in the queue carried Baoshifu bags.

So what’s so special about HEYTEA’s naigai cha compare with those other chains? (Like Yidiandian, Tplus, Gongcha, etc, the sheer amount of intrigue in these tea chains is rather ridiculous, but that’s for another time.) Firstly, HEYTEA is fancier. Fancier means a bigger budget for a wide-range of marketing campaigns on social media, a nice interior, plus a buy-one-get-one promotion for the first three days of their opening. Yidiandian is one of the first naigai cha fast-drink chains to take the town by storm. It still attracts a long line on normal weekdays.

Quality-wise, they are not too ambiguous about their tea selections and their origins. Jinfeng (金凤) is a pretty well-known oolong tea from Alishan, Taiwan. Hongyu (红玉) is said to be a type of black tea imported from North India. Lvyan (绿妍) is a jasmine-infused green tea. And Sijichun (四季春) is actually a really common and mid-low quality oolong tea.

But hey, if a tea is called the Gold Phoenix, the Red Jade, the Green Beauty, the Four Seasons Spring, who cares about their origins or whether they’re actually premium or not. Much like Baoshifu, at least 30-40% of the queuers are huangniu or runners from the crowdsourcing app Linqu. Each customer can buy six cups at most. Pregnant ladies were free from the torture but limited to two cups. (Note: HEYTEA temporary canceled this policy this week, causing much uproar online). I wasn't very lucky on the first visit. All the huangniu inside the shop, waiting in line, were already booked. The next day, I managed to find a huangniu newbie, a woman who was queuing HEYTEA for the first time. She relocated from Baoshifu to here because the former war zone was now “full of plainclothes police”. She charged me 50rmb in addition to the 23rmb Jinfeng Tea King. So we paid for the drink, and chatted about her big troubles in little Shanghai, during the hour-long wait for them to make the tea. Employees were not taking their time -- each order took about one minute, that’s roughly 360 cups in an hour. But the large huangniu community (who kept jumping in the queue) alongside the shady HEYTEA staff (who smuggled the tea through their back door) significantly increased the waiting hours. A guy who was in the same boat as I kept sighing loudly during our one-hour long wait. He commented, “it's totally not worth it, you can get better naigai cha elsewhere.” This poor guy was only willing to pay for overpriced tea the second time because of his girlfriend, thanks to his “flexible working hours”. Signs of a keeper, I believe. These drinks were made with pyramid tea bags. Freshly-brewed or not, no premium tea can maintain its optimum taste after all the pouring (from plastic containers) and stirring. So the tea was rather unremarkable. Though, the cheese flavor did linger a bit longer on my tongue than other naigai cha I’ve tried before (not much, I have to admit). But it came on a bit too heavy after a few gulps.

As they suggested, naigai cha is best consumed in big mouthfuls, tilted to your mouth at 45 degrees so that you can enjoy both textures at the same time. I chose the original recipe, not low-fat or low-sugar, the real deal, and I couldn’t finish half of the drink without feeling a bit sick in my stomach. Like I was about to go into a sugar coma. I guess that’s how it feels when you’re waiting for six hours while holding your pee. In late 2016, news broke out that HEYTEA had raised 100 million rmb funding from IDG and Boquan He. In the fast-drink business, that number is almost unheard of. HEYTEA will continue to expand their business in first-tier cities, with two more chains to launch in the SML center and MetroCity.

Business is certainly good. Today people are still lining up for hours, and it's been three weeks since they opened. However, there was a pregnant lady sitting close to the huangniu and I, while we were waiting for our tea. She was enjoying her Yang Wang Baojiaobu -- the Jianbing shop downstairs that used to take five hours to queue. About that line, she said, “I just made the whole trip in less than 20 minutes.”