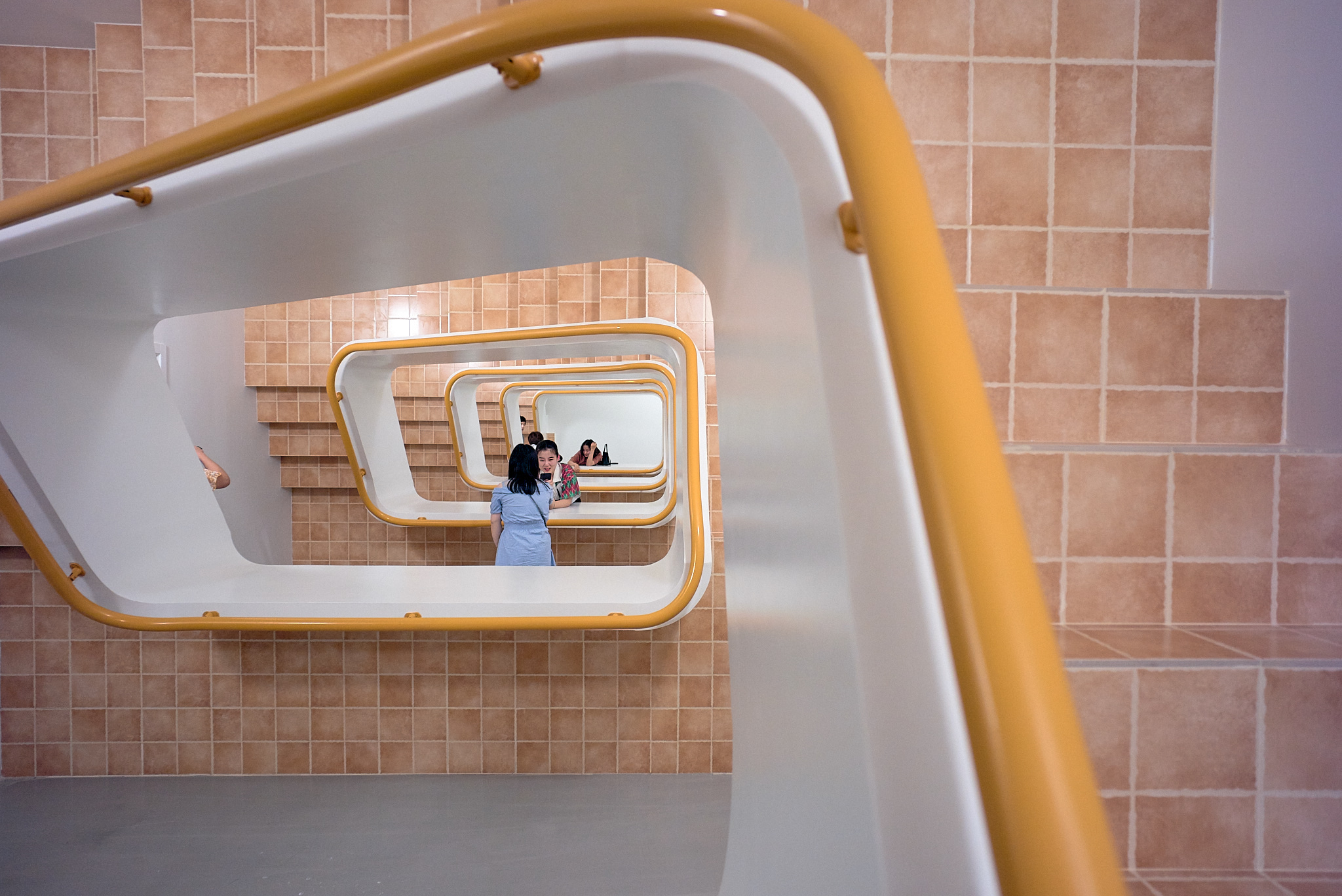 By Jin Qian Jun 15, 2018 2018-06-15 Arts & Stage
Another holiday break, and there's lots of great art exhibitions to check out. Two big, sprawling international exhibitions have just opened, as well as two smaller ones for people who want to check out some works from local artists. A look inside all four after the jump.

Argentine conceptual artist Leandro Erlich’s solo exhibition has turned How Art Museum into a "selfie playland". It features thirteen pieces of his large-scale art installations, including a life-size model of the façade of the Shanghai History Museum’s iconic bell tower. Most famously known for his surreal and immersive Swimming Pool, Erlich returns to Shanghai after his optical illusion shikumen debuted in Jing’an back in 2013. The manipulation of perception is the essential focus of his works, and he often employs physics-defying trickery in a fixed, ordinary environment. The results are imaginative, thought-provoking, and judging from the public’s reaction, deeply entertaining. 'Construction of Reality' encourages visitors to “climb up” on top of Shanghai History Museum and “hang upside down” while holding the handrail of a spiral staircase; to pass through rows of fitting rooms that resembles an infinite mirror maze. To avoid the crowds, an evening or a weekday visit is recommended. The venue is open until 10pm. Filling Yuz’s second floor and a large part of its first floor is the world premiere of a Charlie Chaplin retrospective exhibition, co-produced by Yuz Museum and Lausanne’s Musée de l’Elysée. The exhibition spans 150 years, revolves around Chaplin’s personal life, his movie career, and his influence on contemporary culture across the globe. Hundreds of antique photographs, documents, and promotional prints are on display, divided into seven chapters, mostly chronologically, mostly in black and white. Among them, quite a few are exclusive items or archives related to Shanghai. Clips from some of Chaplin’s classic films, as well as documentaries and home-videos, are playing continuously on dozens of screens. A tramp, a factory worker, a dictator on screen, and a filmmaker with a sharp worldview and clear political stance in real life. The exhibition doesn’t shy away from various controversies and Chaplin's own career lows, offering visitors a comprehensive look of the comic genius. A platform for young local new media artists and comic artists, Animamix Biennale launched its 6th edition in late May and runs until the end of August, simultaneously in a few Chinese cities such as Macau, Hong Kong, and Chengdu. The one in Shanghai takes over three floors of MoCA at People’s Square, gathered around 43 Chinese artists, together to compose a sci-fi / dystopia-themed ballade that reflects the journey of a near future to the year 2310. Consciousness is a center topic here, with the majority of the paintings, installations and sculptures on the first floor, and a “game room” on the third. Artworks here are a mixture of multimedia installations, video-games and video footages. The exhibition has a game-like character, while the issues discussed here are by no means light-hearted: human consciousness, artificial intelligence, bio-engineering. It’s almost like a B-rated Interstellar. Exhibition in shopping malls usually get a bad rap, and 'Hyperimage' may or may not change your bias. Graduated from the now Shanghai University of Technology in 1984, Hu Jieming is regarded as one of the pioneer artists of digital media and video installations in China. Often being compared with Nam June Paik, Hu also blends different disciplines such as architecture, music instruments, and physiology with multimedia art. The concepts of time, history, and memory are the keywords throughout his works. Three major projects by the artists are exhibited at three areas on both B2 and L1: Tai Chi, The Remnant of Images series, and Sound of the Medusa. The four-meter tall, eight-meter wide mixed media installation Tai Chi is without a doubt the highlight. It’s an absurd-looking creature consists of more than 220 equal-magnified human bones and 108 small projectors, playing large and small human faces with two extreme expressions: great joy and great sadness, on itself and on the walls around it. It can also sense obstacles and move slowly in the opposite direction. For a free exhibition, it’s worth it to stop by -- if you ever end up at Poly's Sunny Walk or somewhere close Longhua Zhong Lu station. During the exhibition period, they are screening the artist’s video selection (a total of five, about 50 minutes) every Sunday at 10:30 a.m; Hu Jieming, exhibition curator Dong Bingfeng, and Wuqiong, the professor of philosophy at Renmin University of China, will host an hour and a half lecture on July 7.