Previous Article
The Hongkou Stadium Was on Fire; Shenhua Eh... Not So Much
Strawberry Festival Pre-Sale Tickets Now Available
Next Article
SmartShanghai 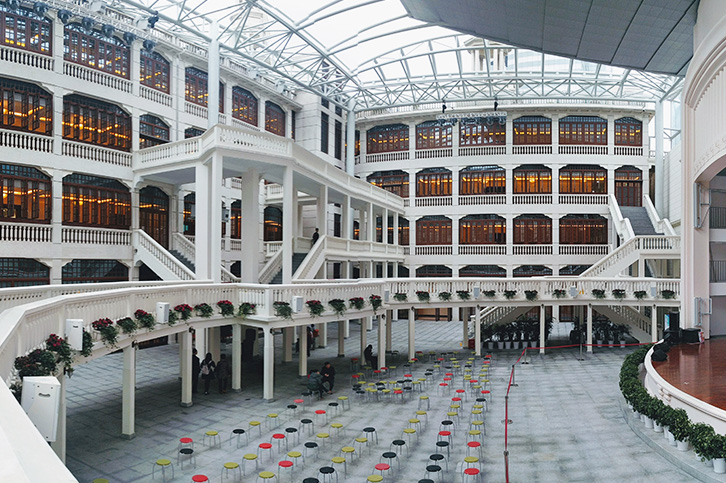 By Jin Qian Apr 13, 2017 2017-04-13 Activities
The first amusement park you visit will always hold a special place in your heart. And for Shanghainese of several generations, that special place belongs to Da Shi Jie (大世界, the Great World). Hard to miss if you've ever had a stroll around the People's Square, this Shanghai architectural landmark is about to celebrate its 100th birthday in a few months. On March 31, after over a decade of renovations, Da Shi Jie finally re-opened to the public.

(Right into the gaze of the judging eyes of millions of Shanghainese.)

It's new and renovated, but the layout is still classic Shanghai old school. Read: Western imitation. Visitors are greeted by 12 distorting mirrors (哈哈镜) — these have been there since day one and are still performing at peak efficiency. It's rather spacious. Four floors of ICH — intangible cultural heritage — scattered around the venue. Showcasing historical objects not just from Shanghai but around China. It also has a big stage in the center and a handful of small theaters on each floor. Events such as traditional operas, traditional instrumental performances, tea ceremonies, and magic shows are happening every day. In addition to bringing craftsmen, street performers, and many food vendors to the complex, Da Shi Jie added in digital technology and contemporary art as well, like a VR room where audiences can view the vistas of Old Shanghai. Or an artificial cave set up with a trippy-looking, Dunhuang painting projection, and mirrors. The result is a mixed bag. There's a certain tackiness as you would expect, but it's overall a pleasant way to spend two or three hours. A few tips before you go: If you take the subway, Exit 1 of Line 8, Dashijie Station is the closest exit. Choose a weekday to go if you can, or purchase the ticket in advance on their WeChat (大世界2017) to spend less time queuing. The food here is inexpensive, so are the souvenirs, but don't forget the stores right next to the entrance — many hundred-year-old brands selling local specialties and tea. Noted, there are no bilingual descriptions in the venue, although it shouldn't be hard to navigate inside. On our visit, a few senior citizens were complaining about the 60rmb entry fee. Well, indeed it is quite steep to them considering it was only 5rmb like thirty years ago. But all the performances and most of the workshops here are free. Each guest can get one RSVP (预约券) ticket an hour before the show at the first floor (for performances) and third floor (for workshops).