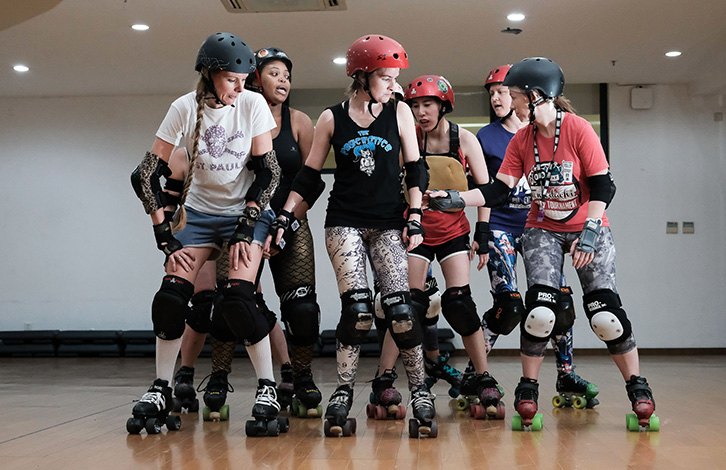 Rock 'Em, Sock 'Em: A Chat with the Shang-High Rollers Ahead of Saturday's Bout

By Sarah Boorboor May 17, 2017 2017-05-17 Activities
Something new and exciting is going down in the world of Shanghai roller derby this Saturday: the first ever bout between the Shang-High Rollers and the Pan-Asian Spring Rollers. Our very own Shanghai team has been dreaming of hosting a bout for quite a while, and it’s finally happening. Strap on your helmet and knee-pads, it’s ‘bout to go down. In anticipation of their upcoming event, Tina Turnatrick, Afronaut, Twinkling Vixen, and Shirley Temper Tantrum of the Shang-High Rollers sat down to answer a few questions about their league.

SmSh: For total newbies, what is Roller Derby?

Tina Turnatrick: Roller derby is a sport played on quad roller skates by two teams on an elliptical track. The point scorer, called "The Jammer", gets 1 point for each opponent they pass. So both teams are trying to help their Jammer get through while simultaneously stopping the other team's Jammer. Expect lots of hits, falls and pushes. SmSh: The Shang-High Rollers started the roller derby scene in Shanghai in 2012. Five years later, what has changed?

Afronaut (team captain): We were founded by 3 members of the UK team, the Dolly Rockit Rollers. Since then, our team has changed constantly with members of all levels coming and going. Currently, we are at the strongest our team has ever been. The dedication to both the sport and the organization of the league by our current members is what has made this game possible. As one of the founders I'm incredibly excited and almost shocked that the bout is happening because this event has been such a long time in the making.

I'm not going to say there won't be tears on the day (happy ones of course). Another founder, Koko Kabama, will be announcing.  Shirley Temper Tantrum will be the head referee on Saturday which is just as important as (if not more important than) having skaters. We have her to thank for a lot of our progress over the last few months, including our recent trip to Japan to play in the Tomodachi Tournament. I'm very proud of all of the members of shanghai roller derby, present and past, who have made this possible. It's been my dream from the start to have a roller derby game happen in Shanghai. SmSh: Who’s in the league?

Twinkling Vixen: Shanghai Roller Derby League has just the one team, the Shang-High Rollers. We are one of 2 leagues in mainland China, Beijing being the other. A team consists of 8 to 14 skaters. At the moment our League has skaters between the ages of 17 to mid 30s. Our current group of 'fresh meat' skaters are learning the basics, whilst we also have skaters who have been playing derby for over 6 years. Derby is for everyone, we have students, mums, teachers and other professionals in our team.


SmSh: What is it that attracts people to roller derby? Do you have to be a pro on skates to join?

Shirley Temper Tantrum (head ref): Roller derby is extremely inclusive and empowering for women. For most participants, it becomes so much more than just a recreational sport. It builds confidence, friendships, and athleticism. It's a relatively new sport (and the world's fastest growing women's sport), and many players from around the world had never skated before joining roller derby. Most leagues, Shanghai included, have gear to rent to new players and teach new groups of interested people how to skate, fall, and hit. We call it "fresh meat" training SmSh: The first ever live roller derby bout in Shanghai will be played this Saturday eh? What can spectators expect?

Shirley Temper Tantrum: Spectators will see a full contact sport with women on roller skates! There will be high speed skating, impressive agility, and of course the inevitable falls with bumps and bruises. Skaters will use "derby names", wear protective pads, and skate counterclockwise in an oval while blocking, hitting, pushing, or impeding their opponents. At the same time, skaters try to help their jammer not get blocked, hit, pushed, or impeded so she can score points.

Grab your tickets for the first ever Shanghai roller derby bout and enjoy some high-speed entertainment this Saturday, May 20, 4pm. Event details here. After-party at Roxie.

All photos by Pawel Wyszomirski.