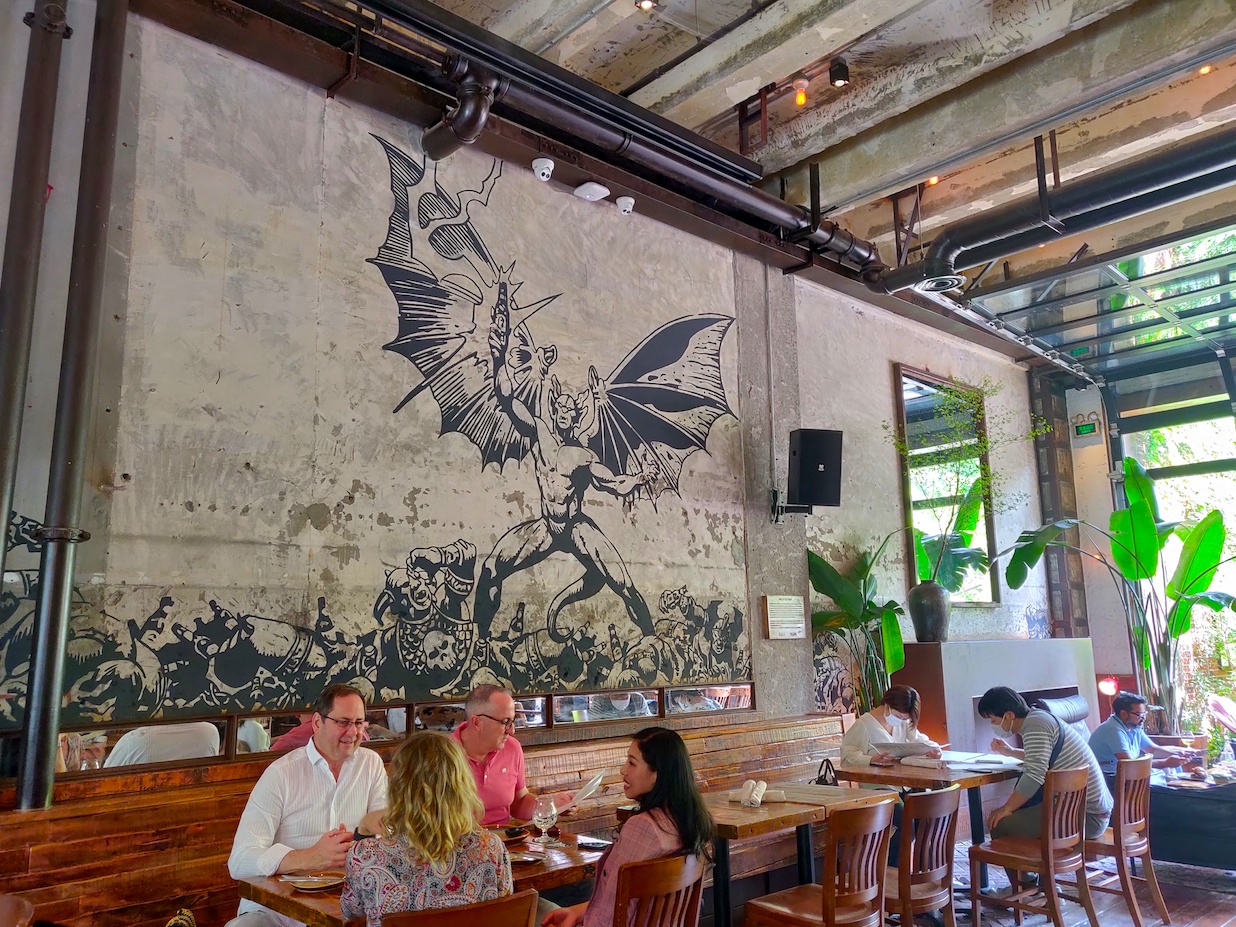 Commune Reserve Reopens As Stone Brewing Reloaded, And It's Kind Of Weird

By Alex Panayotopoulos Apr 26, 2020 2020-04-26 Dining
Commune Reserve, the physical and Stone-anointed spiritual successor to Stone Brewing, opened up over the weekend. Rammed on day one. Seems like people were itching to get back in there. When we said it was basically 90% the same as Stone, that was accurate. I went and the deja vu was intense and a little uneasy. It's definitely still looks like Stone. Stone merch still on the shelves, Stone beers in the fridge, Stone growlers behind the bar, Stone coasters under the glass. Presumably they'll phase that stuff out, but they say the giant gargoyle mural will remain untouched, and hopefully they'll still play death metal in the bathrooms. Even the font sort of looks the same. Same same but different. Some additional beers on the menu for equivalent prices, though for now it's mostly still Stone. Commune inherited a shipment in transit when they shut in March. Wonder if they'll really hew to the "2/3rds Stone, 1/3rd rotating" idea. The booze list adds cocktails, like a nice gin and tonic with rosemary from their very dog-friendly patio garden, and the food menu — they say they kept the kitchen staff — has been lightly amended with new stuff, like a falafel salad. Stone Burgers are now Commune Burgers, but still include smashed avocado.

And they added fries! French fries! I ordered just a heaping side of fries with a glass of No. 18 Gold Coffee Saison from Wuhan (#Wuhanjiayou) and it came with ketchup, and it was sublime. So this all makes sense, right? Stone had a strong following in Shanghai and Commune would be stupid not to capitalize on that. It's mostly the same people anyway. Charitably, this is just Stone Plus. It's not some freaky alien with a crooked grin wearing Stone's face like a mask. It was just a bunch of guys who loved Stone and brought it to China but it didn't work out and hey isn't it just super that they have this China-wide beer bar brand that can step in to fill the void? They even have a plaque outside commemorating the hand-over of the Stone banner in China. I went on the Saturday it opened and it was already packed with a familiar crowd and a familiar atmosphere. It's like old times! Less charitably, this is super weird. The bar's enthusiastic following might've been built by the handful of guys that still work there, but they did it with a big US brand behind them. And when that big US brand suddenly left under opaque circumstances, Commune moved smoothly into the vacuum and scooped up the place, the tables and the customer base. Their WeChat group is still called "Stone Brewing." It's not an alien wearing a skinmask, but it's kind of like walking into Bob's Grocery and finding Sam behind the counter.

"Bob had to go back home," Sam says, adjusting Bob's apron. "He told me I could have the place, and all the stuff in it. And he also said Sam's Grocery is the best grocery in town, so we're renaming it Sam's Artisanal Grocery. You can read the plaque outside, it says Bob and I are totally cool. It's cool between us."

"We serve fries and ketchup." Bah, who cares about corporate shenanigans anyway? Drown it in a sea of ketchup fries! Long live Sam's Artisanal Grocery!