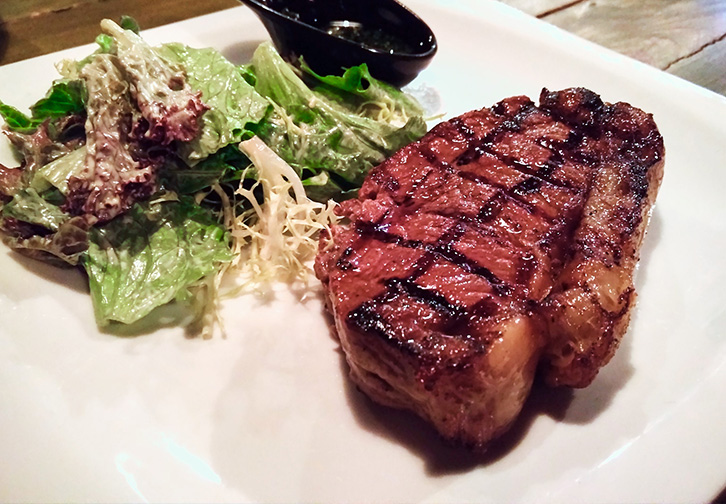 The Best Steak and Wine Deal in Town?

By XZ Palmer Feb 23, 2016 2016-02-23 Dining
Pan-Latin American restaurant El Bodegon has a permanent 50% discount on their steaks, and Monday-Wednesday, they offer a glass of wine on top for a wallet-busting 5rmb.

How is this even possible? Is the steak actually good? In this week's "Deals Tested", we find out.

The TL:DR version is this: Basically, all steaks have been 50% off for the past 7 months at El Bodegon, BUT on Monday to Wednesday, instead of paying 95rmb for the 200 gram-er or 140rmb for the 300 gram-er, you pay 100 or 150 and it includes a house wine or sangria. Then it's happy hour drink prices after that. This is a good thing. Nay, this is a great thing.

Two brothers from Argentina run this place, and they're usually at the shop. It's a small, casual restaurant just across from the recently shuttered Fortune Cookie, with wood tables, pleasant, competent, multilingual service, dark lighting, and some smooth Latin rhythms mixed with a bit of Top 40. A solid mid-range experience. No complaints.

The steak was juicy, tender, and well-seasoned -- decent, all-around. So how could it be so cheap? According to our server, they're part of a co-op in Shanghai that buys directly from the producer in Argentina. Fair enough. Like a back-end Groupon thing, maybe. They've cut out the middle man. Of course, there's a million possible reasons why a steak could be cheaper than, say, Morton's: grade of beef; the cow's diet; breed; and aging (sitting on inventory costs loot); the general overpricing of steaks in Shanghai. High-end steakhouses also have better wine lists, broilers, locations, locations, locations, and service, which require more expensive staff and management. They also tend to be premium "experiences", and as good as El Bodegon's steak is, it's still the Jansport backpack to Ruth Chris' Prada bag. They're offering a humbler cut. Again, this is a perfectly alright thing.

So, a damn good deal. The only complaint -- and I'm really digging for one -- is the basic side salad and no option to swap it for fries. But that doesn't really matter. The meal is 100rmb. A side order of fries is 20rmb, and sangria, basic cocktails, and house wine are 30rmb after that initial cheap glass. If you're craving a good steak in a nice environment that won't break the bank, this is your answer. Thumbs up on this deal.