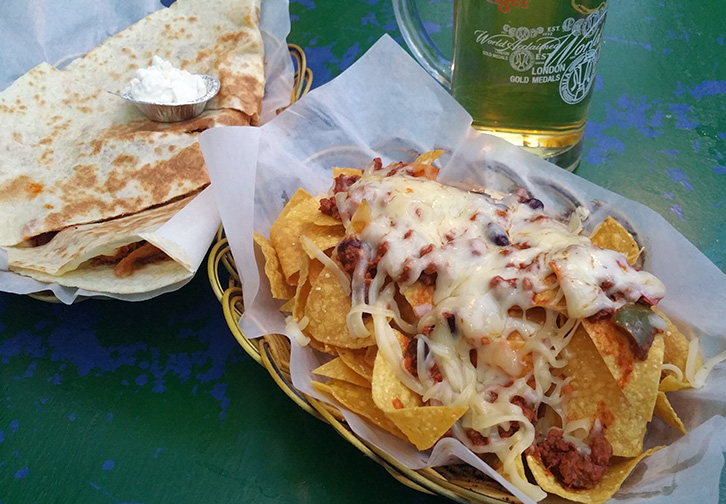 “That’s the thing, no one knows!” exclaimed one guy at a gender equal table. He had just revealed that AIG -- American International Group, the multinational insurance corporation -- was originally founded in Shanghai. This is an exciting sort of thing in some circles. Nearby, a group of youngsters drank heavily. At another table, two well-dressed girls were painstakingly unraveling their lives to each other -- gossip, boys, work.

Windows Scoreboard isn’t typically so busy on weekdays, but on Wednesdays they have “Mexican Madness” -- four hours of all-you-can-eat Mexican food starting at 5pm.

If that's not enough for you, the deal also comes with a complimentary margarita that, incidentally, tastes more like pineapple juice with a hint of isopropanol. There are two rules to Mexican Madness: 1) You can only order one plate at a time; 2) You must finish that plate before you order another. Fair enough. That seems reasonable. Options on the menu include beef and chicken quesadillas, tacos, and nachos. Portions are not overwhelming. If you’re hungry, you’ll probably be able to get through three or four orders of each. There's also a 25rmb buy-one-get-one deal on draft Budweiser. Windows is a real generous enterprise. They're giving and giving and giving here. It must be said, though, the Budweiser doesn't taste like Budweiser, you might get into a small spat with your server about the bill because they can't do proper addition, and they only take cash. But hey, it's Windows. It's Windows.

You've probably had their quesadillas, tacos, or nachos before. They're basically what you expect -- not exactly haute cuisine, but not exactly directly painful to chew and swallow either. They're fine. To get a limitless amount of this for 50rmb, you'll get your money's worth.