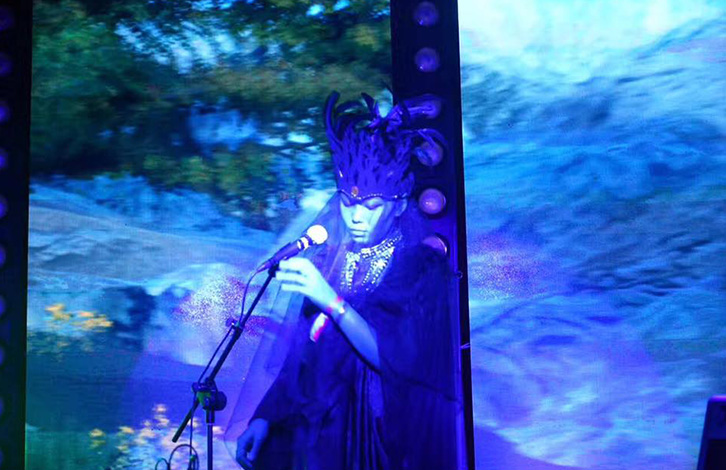 By Morgan Short Jun 13, 2017 2017-06-13 Music
A bit of a quieter one this weekend on Shanghai stages, but it looks like local musicians and producers have been using the time off wisely. Lots of new music out there available on the internets from Shanghai-based artists. Hooray? Tune in and drop out, kids. We'll send a few new releases your way and then run-down a few live music suggestions for the weekend.

Faded Ghost's Moon Mad Is Out Now on SVBKVLT

Celebrated at a well-attended release show at new club du jour ALL, Faded Ghost (AKA ChaCha) brought into this plane of existence her latest Moon Mad, an ambient piece of work, steeped in field recordings and macabre drone work -- some cult-damaged stuff fit for all y'all daughters of darkness. Here's a trailer video. VPNS ENGAGE.

You can purchase the full album right here.

This is the first music viddy from Shanghai-based UK tranplant Downstate, shot and edited himself using VHS camcorders apparently. Looks like he was out there, in Shanghai and "beyond", chasing down some UFOs or something. Getting some real '90s X-Files sorts of vibes from this one. Pretty neat effects. The truth is out there, Downstate. I want to believe. The glitchy, spectal stuttering track "Beyond '99" is available on his bandcamp right here.

The CDs and cassettes are available wherever good Taobao CDs and tapes are sold. (On Taobao right here.)

This one's nice too. I like the vocal sample. Respect.

Check the rest out on Foster Parents' bandcamp.

One of Shanghai's most promising new heavy acts to emerge in the city in recent years, Alpaca has finally put it on wax with a four-song demo out now on their bandcamp page. Showcasing their bedrock influences in doom and NWOBHM filtered into various '90s-ish heavy sounds, the record is a fat and greasy four tracks of classic-leaning metal. Inferno-core metal at its most distilled. It's all there on All Will Fail. Dick swinging riffage. Sludgey breakdowns. A title track that has the word "motherfucker" in the chorus, right out of the gates. These are all good things.

Bite it, you scum.

Scorpion Prisoner 69 Has a New Single Out

Shanghai's premier revenge rock group Scorpion Prisoner 69 is back again from their hole in the desert with a fiery single "Sasori I", which finally answers the age-old question: What happens when you make a blast beat punk song almost 6 minutes long? A: NOTHING BUT GOOD THINGS. This one speaks for itself. It's just one song but really is a meal unto itself. Sort of like if GG Allen was in Thin Lizzy or something. You can download it for name your price. Can't go wrong.

Scroll through their other singles at their bandcamp page. That's your next 5 hours sorted!

Weekend Shows from a Shanghai Stage to Your Face

Not too much on for this weekend but here's three that mighn't suck:

ALL Club - 2/F, 17 Xiangyang Bei Lu, near Changle Lu
Talented MPC wizard from Manila returns to Shanghai to play ALL. If you like beats pounded out on a pad, this one's mandatory. Really.

Hell of a Time Part 3

Inferno (Bund Square) - Bund Square, Unit 6-103, 1/F, 658 Dapu Lu...
The obligatory weekend metal show at Inferno. IF YOU LIKE HOWLING AT THE MOON THIS ONE'S MANDATORY.