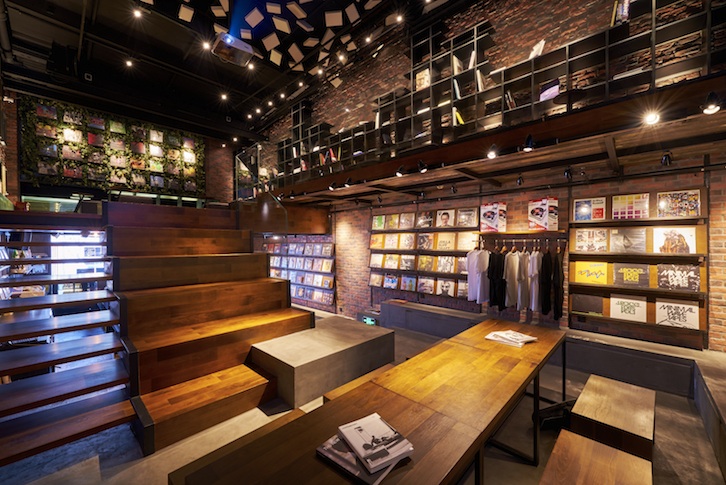 By Ian L. Nov 6, 2015 2015-11-06 Nightlife
Whoever opened this magical new café BOTH in Red Town clearly loves music and doesn't mind if their record collection gets scratched up. They've placed about 150 carefully selected hip hop, jazz, funk, and soul vinyls on the walls, and customers can borrow a mini turntable, put it on their table like a hotpot, and listen to whichever albums they want.

There's EPs and LPs by Flying Lotus, Madlib, Parliament, and a lot of Stones Throw. These records are not for sale. Next door, BOTH has a clothing shop, and they just launched their own magazine. This may or may not be a sustainable business model, but it's great. Here we are in Red Town. Love this place, with its giant Einstein-head statutes, picnicking families, grass you can sit on, galleries, and alleys to explore. Once the home of the original Mao Livehouse and Japanese nightclub Node, Red Town now feels a bit rusted and a little neglected -- almost like a safe Detroit, with homeless cats instead of homeless people. The area still sees a lot of foot traffic during the day, and when you walk in from Huaihai and turn right, you'll see BOTH (the clothing store) on your left, and BOTH (the music store and café) on your right. BOTH's concept is simple: "you can have many different things here", said the guy working the bar last night. Nice space (Japanese designer), a bar that appears built from Qiujiang Lu Market speakers, good beer and coffee, a few pastries, and some tables. Beers run 30-40rmb. Listening to the records is free, and some DJs say that if you know the boss, you can buy the records. Last night was fairly quiet. A younger dude walked in with his date, they selected a few records together, and she started dancing a bit to the Yesterday's New Quintet album on the stereo. Her eyes looked enchanted with this dude and his record picks. He probably scored last night, or at least got a good-night kiss.

The main soundsystem could be a little better, but then again that would interfere with people listening on their personal turntables (which have their own mini speakers and headphone jacks). Also, the bathroom is outside, maybe a 50 meter walk away, but you'll meet some of those friendly, well-fed street cats along the way. Otherwise, both thumbs up for BOTH. Not many people know about this place yet. When we asked the bartender when they're having their big opening, he replied "last month". Someone should tell these people that it's Shanghai, and you can have as many openings as you want.