Previous Article
"You’d be better off drinking at Perry’s and eating at Windows Scoreboard." & The 500rmb Sherpa's Winner
Dozens Of Businesses On Shaanxi Nan Lu Getting Shut DOWN
Next Article
SmartShanghai 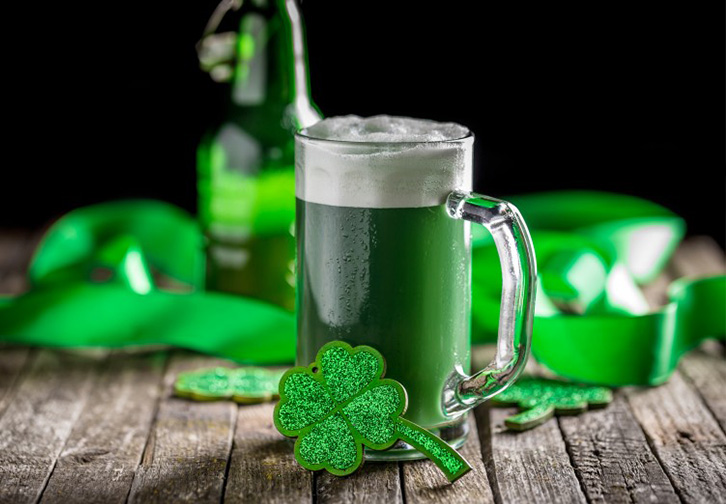 By SmSh Mar 16, 2016 2016-03-16 Nightlife
Happy St. Pats, y'all! From our Appropriated Holidays Desk, here's a quick little listical guide as to where you can "celebrate Irish culture" in honor of St. Patrick this year.

Oh, and speaking of Irish culture, for absolutely no other reason than to mildly amuse ourselves as we keep the blog wheels turning, this year's St. Pat's events list shall be randomly annotated with the film career of Ireland's greatest thespian export: Mr. Liam Neeson. The obvious starting point with our boy Liam -- his portrayal of Irish revolutionary leader, soldier, and politician, Michael Collins in the eponymous 1996 film. Nice one, Liam.

1. Starting with places that are actually Irish, Yongkang Lu pub Blarney Stone has St. Patrick’s Day deals from Thursday to Sunday. Each day features something different, from a live Irish band on Friday to 188rmb all-you-can-drink Jameson at their "Sunday Recovery Session." Full details. More revolutionary Neeson: "Rob Roy". This time our man's liberating Scotland or something, shutting down a very effeminant Tim Roth by catching Roth's sword in his BARE HAND and stabbing him with it. YES, Liam. Seriously.

2. The Tipsy Fiddler on Xingfu Lu has a night of live Irish music, but no deals aside from happy hour. Just a real homey place, this one. They've got live music most nights of the week and the owner is often the one performing. Real nice guy. Details here. "The Grey" AKA the movie where L-Money just fights wolves for 117 minutes. All kinds of awesome.

3. Green beer. Liquid Laundry and Boxing Cat Brewery in Sinan Mansions have it, along with some Irish staples. They'll give you a sampler of their Lucky Leprechaun Lager if you wear something green on March 17. That green beer is on happy hour price all day. Details and more details. Your boy, the Neeson, playing Ra's al Ghul in the first Nolan "Batman" movie. Remember at the end of the third one it was revealed that the whole thing was about Ra's al Ghul anyways?

4. Zapata’s! Yeah man, they're going real big this year -- just check out the gold-digger on this flyer. They have a St. Patrick's Day countdown (whaaaa?) on Wednesday night, a.k.a. "Shanghai's Original Ladies Night." Free shot of Jameson if you wear green and get in before 11pm, and free margaritas for all the ladiiiiiies from 9pm-midnight. No cover. Details. Hollywood: Hmmmm, who can we get to play our redonk Jesus lion in our new international mega blockbuster "The Chronicles of Narnia: The Lion, the Witch and the Wardrobe". OH WAIT I KNOW JUST THE GUY.

5. The People’s Republic of Comedy have a St. Paddy’s improv show at Kung Fu Komedy Club on the 17th from 9-10.30pm, with Irishman Bryon Murphy telling stories. Price is 50rmb. Details. Neeson does the Jesus lion for a few movies and then comes right back atcha on the flipside with Zeus from "Clash of the Titans". What a horrendous piece of shit that was. Not Neeson; he was great in it.

6. Changle Lu staple Southern Belle does something for most holidays, and similar to years past, they're got deals Thursday-Sunday, with 25rmb shots of Baileys or Jameson, a menu with Irish stew and special sandwiches, and booze deals Thursday-Sunday. Should be good vibes on the patio if this weather keeps up. Don't know why all these Eastern European white slavers keep messing with Liam Neeson's daughter and shit. This is from "Taken 3" (also known as "TAK3N") when he spends a good two hours garroting most of the former Eastern Bloc with CIA piano wire. For the third damn time. Want to try for four, Slovakia?

7. Pub Crawl Shanghai has a pub crawl on Saturday night from 9pm. Just pouring culture straight down your throat, rolling around town in a party bus, hitting up 3-4 bars and a club, pounding free shots... You know the deal. Good chance to meet people if you're new in town. That one is 200-250rmb, depending on if you go for the one-hour open bar option. More details. 8. Finally, what you really came here for -- the info on what Windows has going on. Well, since you asked, Windows Too, Garage, and Scoreboard have Jameson shots for 15rmb, Baileys for 20rmb, Guinness for 35rmb, and Nutty Irishmans for 30rmb. Starts at 5pm and goes late on Thursday. More info here.